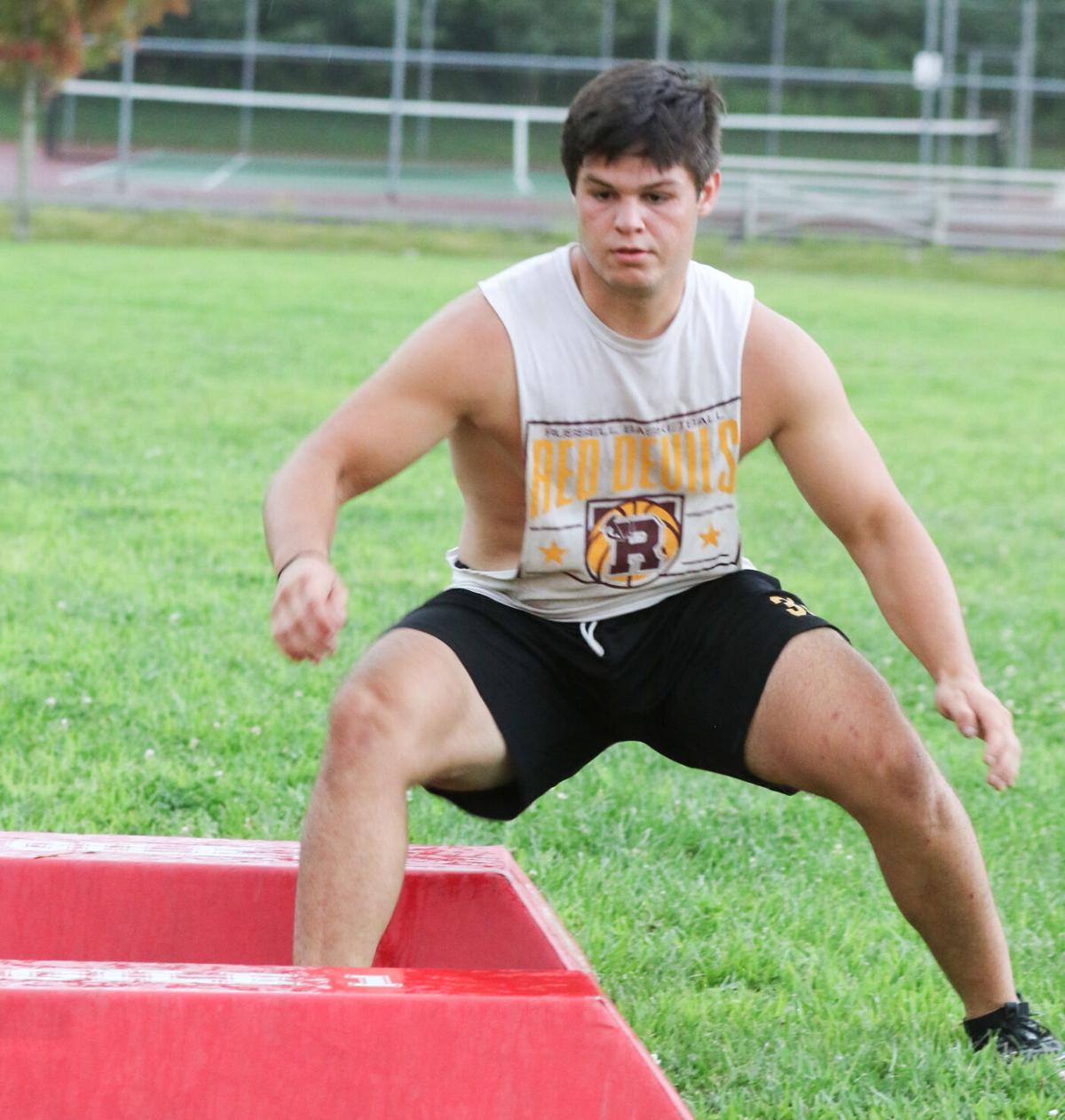 Russell senior Chase Snedegar runs a drill during a recent workout. He is ready to return to the field after injuries the last two seasons. 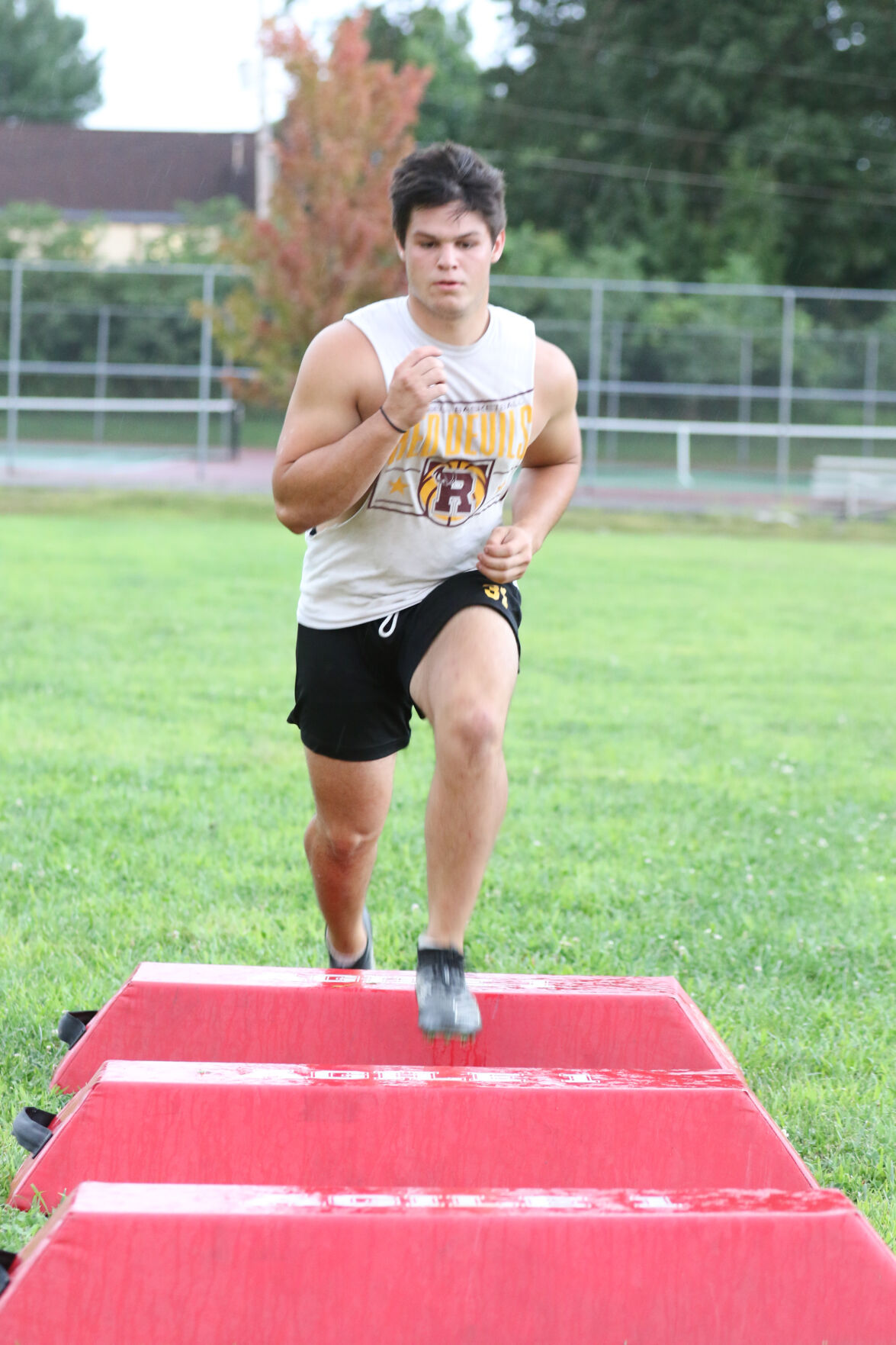 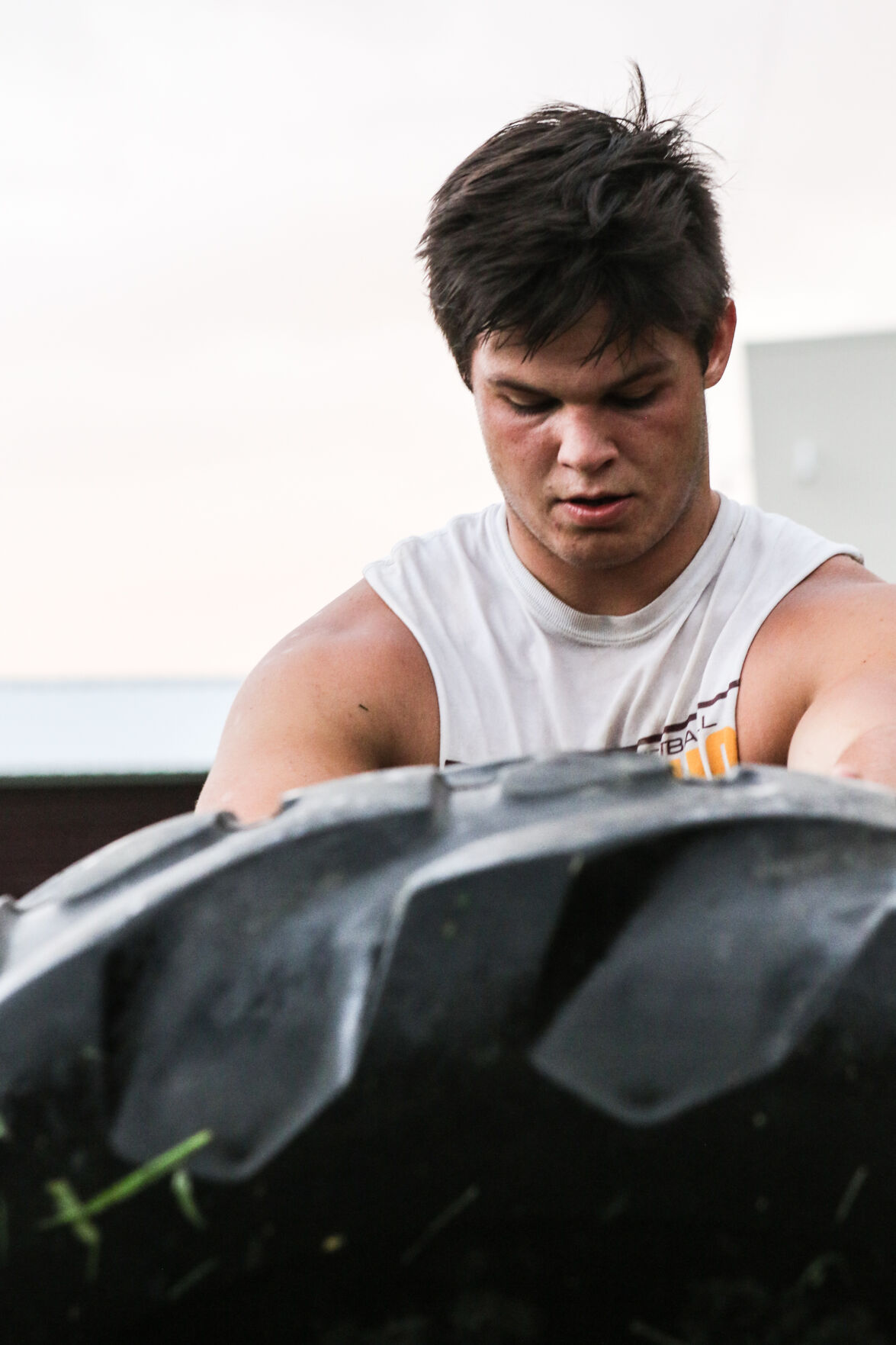 Russell’s Chase Snedegar flips a tire during a conditioning drill at a recent workout.

Russell senior Chase Snedegar runs a drill during a recent workout. He is ready to return to the field after injuries the last two seasons.

Russell’s Chase Snedegar flips a tire during a conditioning drill at a recent workout.

RUSSELL It’s no secret every football player wants the chance to play on Friday nights. Russell’s Chase Snedegar just wants a chance to reap the rewards of an unimaginable list of injuries.

Russell coach T.J. Maynard said his plans for Snedegar started as a sophomore, but the now-senior hasn’t yet gotten the chance to fully compete due to injuries.

“As a sophomore he was going to play a lot of special teams and be in a defensive rotation, but he ended up pulling a muscle away from the bone that goes to his hip,” Maynard said.

Snedegar worked through rehab in hopes of returning to the field later that season, only to have another setback shut him down for good.

“I actually came back that season but hurt the hip again, so we just called it quits,” Snedegar said. “After that happened I kinda got down because I had worked so hard in the offseason.”

After a full offseason to heal and rehab, Snedegar was ready to return to the game he loved as a junior in 2019. But his goals were much different in his return and Maynard took notice.

“Last year in team camp, he might have been one of our best football players,” Maynard said. “Him and (Nathan) Conley, when they were against each other, it was very physical.”

Both players saw the same position work on both sides of the ball — on offense running back and on defense linebacker. Snedegar said he felt like his junior season was lining up to be one to remember.

“My junior season I was up there with the top guys in the weight room,” he said. “Weights all went good and we hit team camp and I had a really nice time through team camp and did really good. We hit the first few scrimmages and I was still playing good.”​

Russell opened the season on the road at Mason County and Snedegar was primed to make an impact on both sides of the ball. His first touch of the season proved just that.

Snedegar’s next handoff was his last after the injury bug bit him once again.

“I went back in at the end of the first quarter and blew my ankle out on my next carry,” Snedegar said. “It just snapped.”

Snedegar underwent surgery to repair the break with hopes of returning later that season. However, Snedegar needed multiple surgeries to overcome the bad break, including a serious infection that set up after his second trip to the operating room.

“To the kid’s credit, he was trying to get back for those last couple of games in the playoffs, but he had some setbacks that didn’t allow him to do it,” Maynard said. “That kind of shows you how important it is to him and his work ethic that he was putting himself in position. The leg just wouldn’t cooperate.”

Snedegar tried to remain positive throughout the endeavor but admits watching his teammates on the field was a tough pill to swallow.

Snedegar come into camp motivated and ready to become the impact player he had always hoped of being for the Devils. However, he learned that his impact might be coming from a different position.

“We talked about this before last year of playing him at nose guard because he was really strong, squats and moves really well,” Maynard said. “Since he was a little bit heavier, we thought he would be a better fit.”

Snedegar felt he could be more impactful at his previous position and took it upon himself to make that happen.

“They started me at nose guard because I had put on a bunch of weight, but I wanted to run the ball,” Snedegar said. “We had a couple weeks for the dead period and then I went to Florida and by the end of dead period, I had lost over 15 pounds and regained a little bit of speed. I stayed on the weights and just can’t wait to get back on a football field. I was good with moving to nose guard, but I’ve always loved running the ball.”

Maynard said when Snedegar returned from the dead period, he had changed his body and was in shape to return to his linebacker spot. However, the wait has been the hardest thing under the cloud of uncertainty that has been 2020.

But Snedegar said the uncertainty has not held him back, but rather fired him up for one last chance to play on Friday nights.

“It’s motivated me so much because I’ve seen just how good I could play but I haven’t had the chance to do that,” he said. “I really hope we get to play so I can take all the work we’ve put in over the last three years so I can go out there and just have a year to play with all my friends. Just want to make it a great last year and hopefully put up some good numbers.”