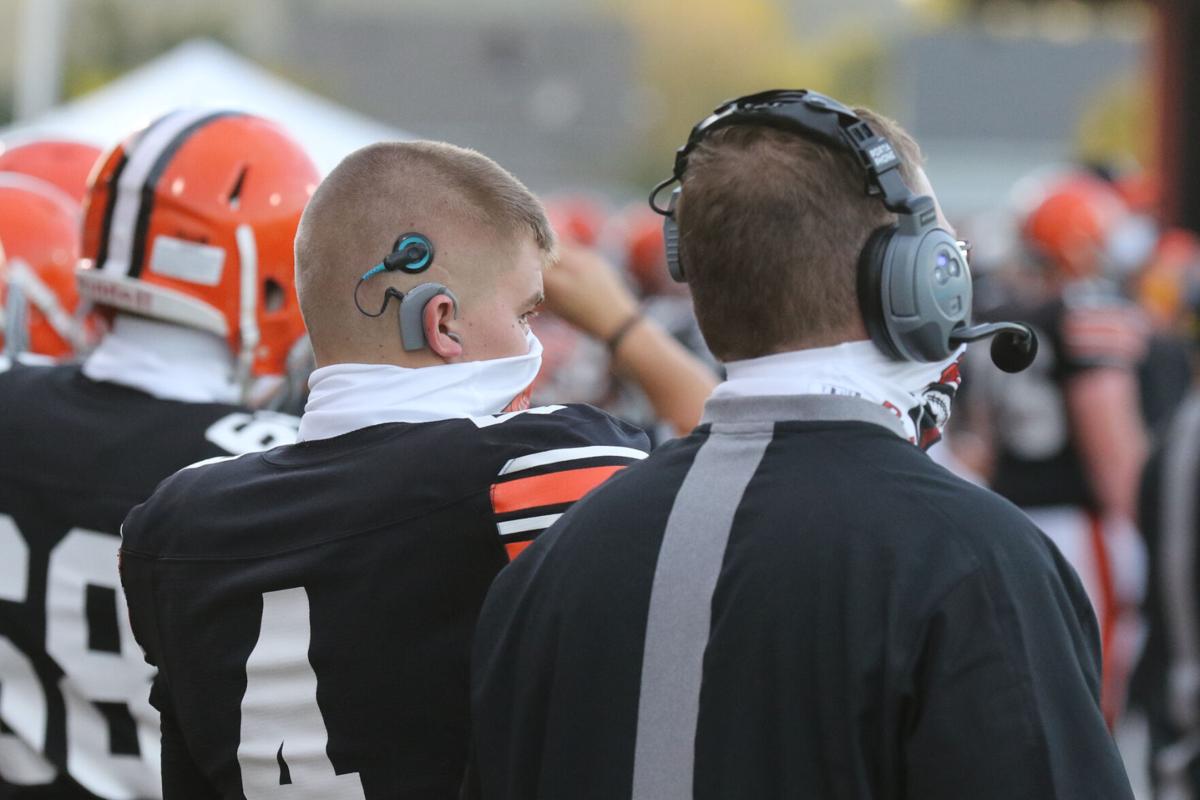 Ironton quarterback Tayden Carpenter looks on with quarterback coach Dr. Jarrod Smith during a Fighting Tigers game this season. Carpenter wears a cochlear implant on his right ear. Smith uses a device to amplify his voice during a game. 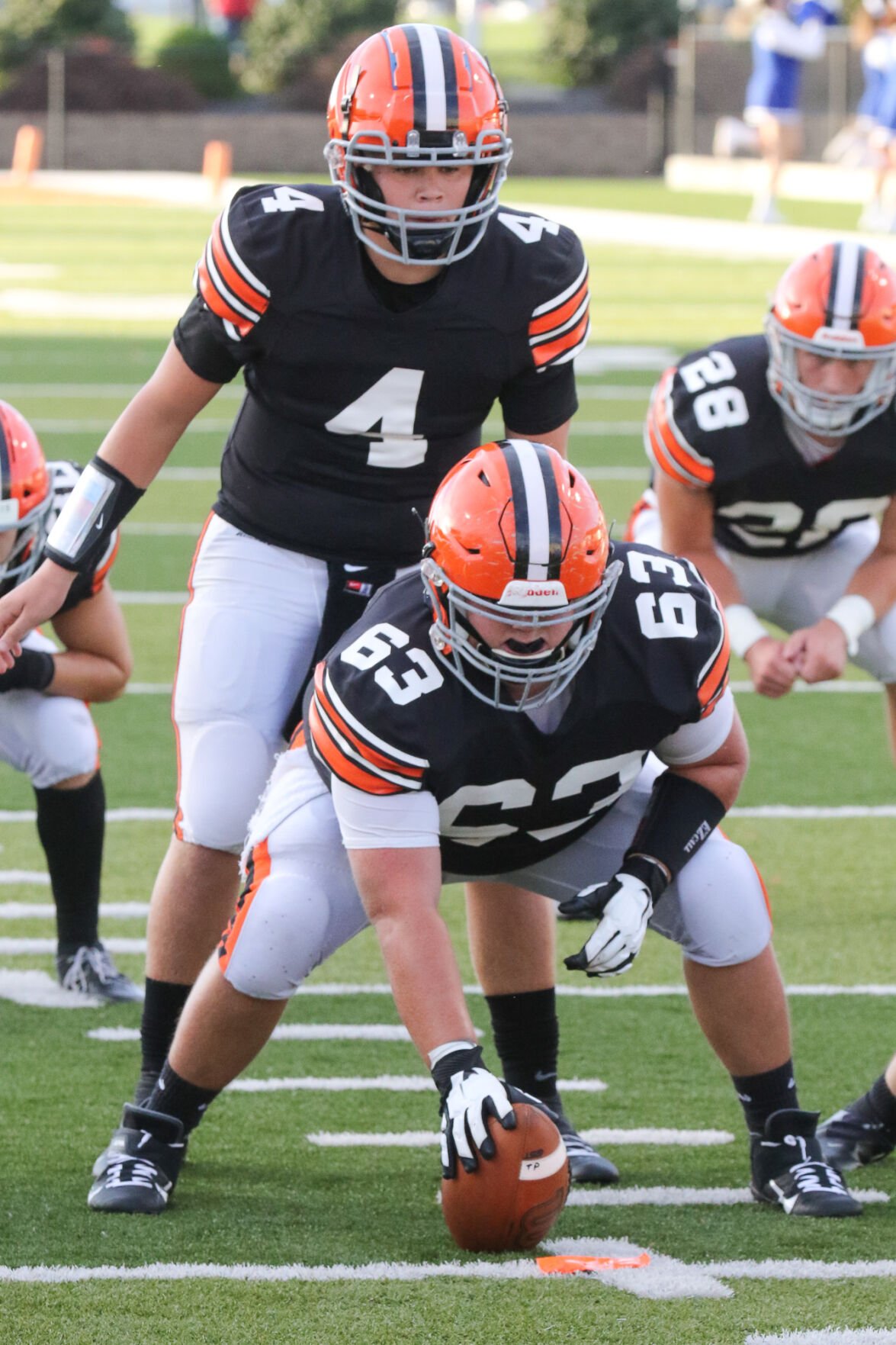 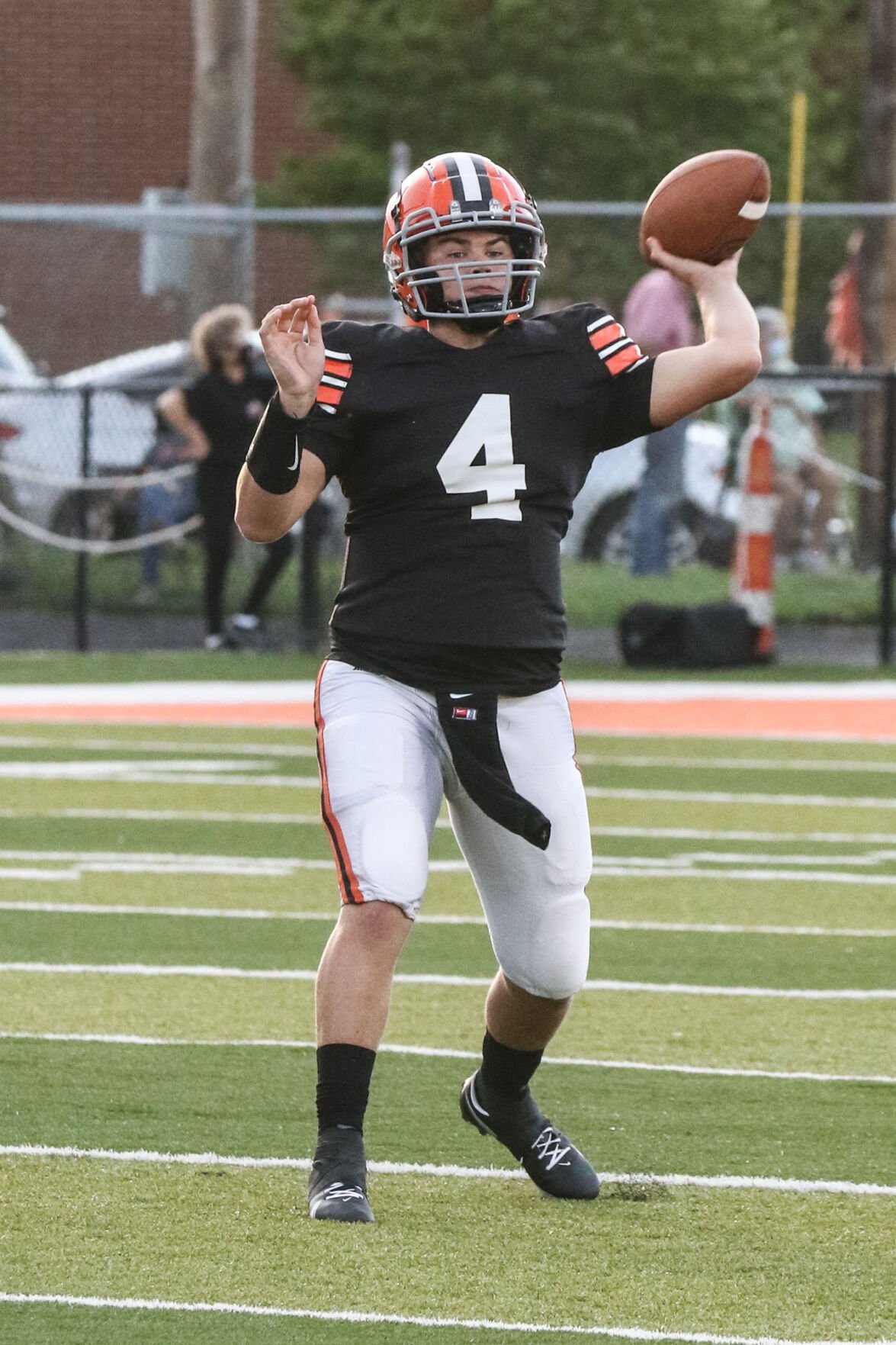 Tayden Carpenter attempts a pass against Gallia Academy on Sept. 4. 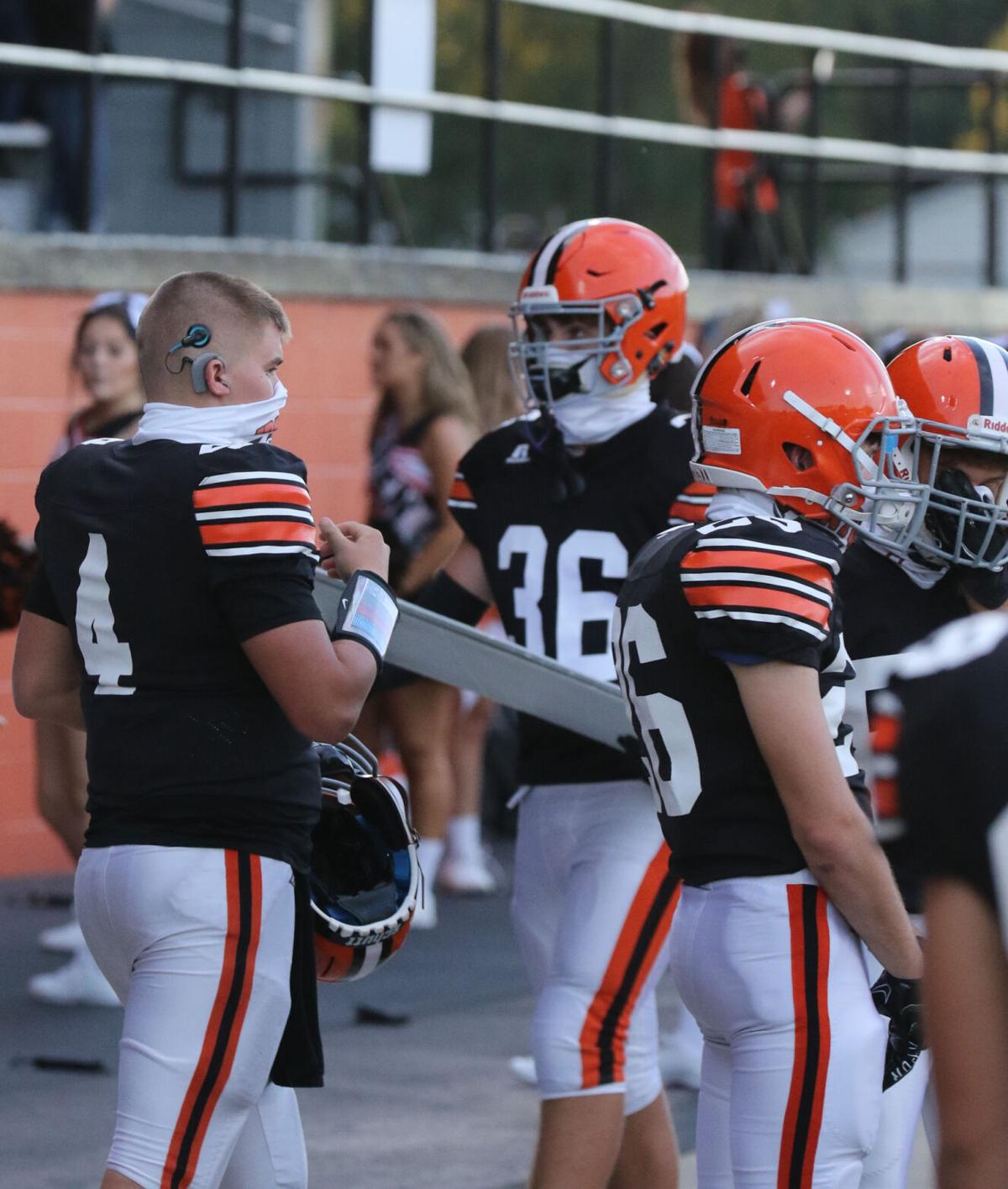 Ironton's Tayden Carpenter talks with his teammates during a game against Gallia Academy on Sept. 4. 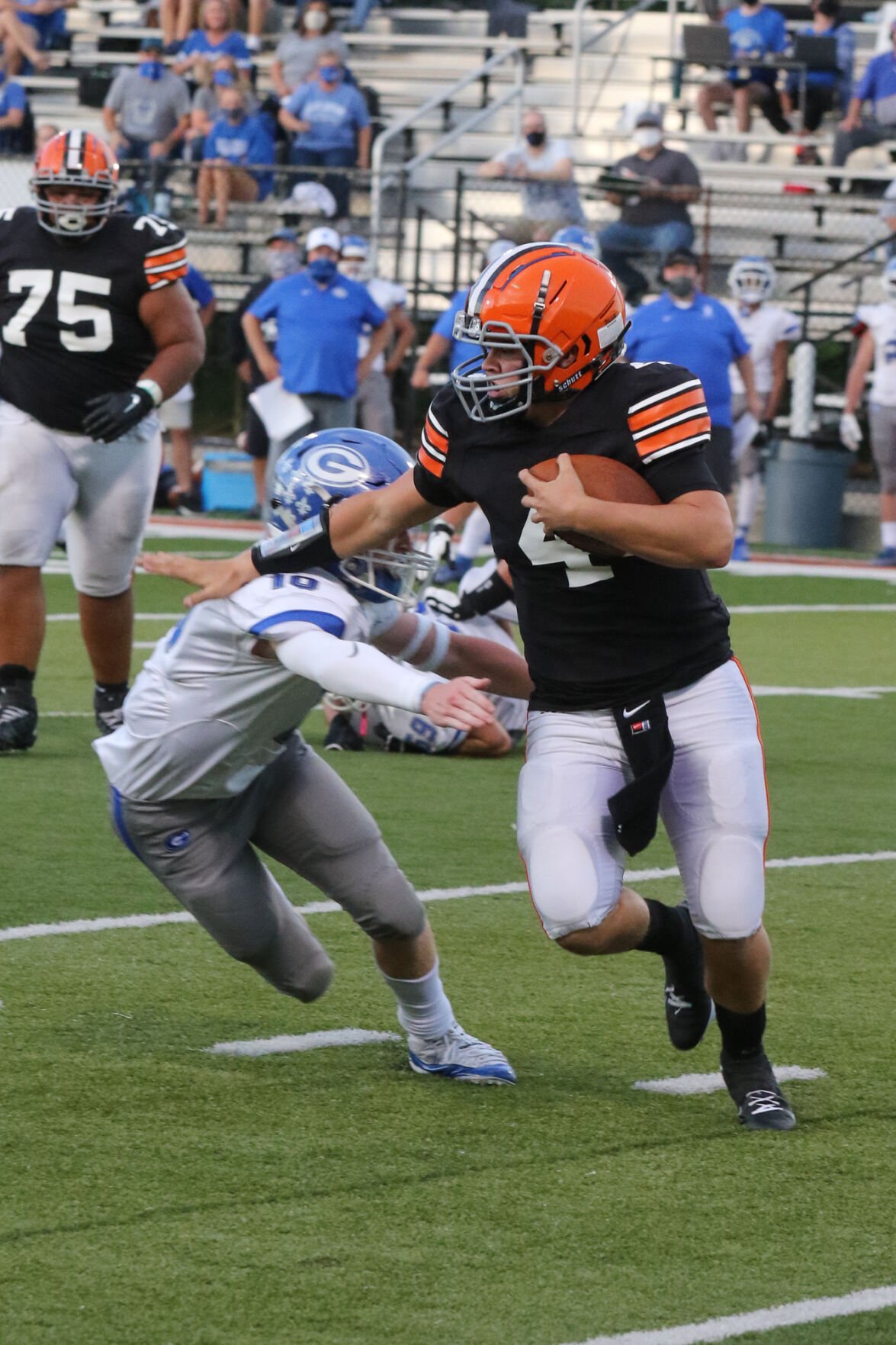 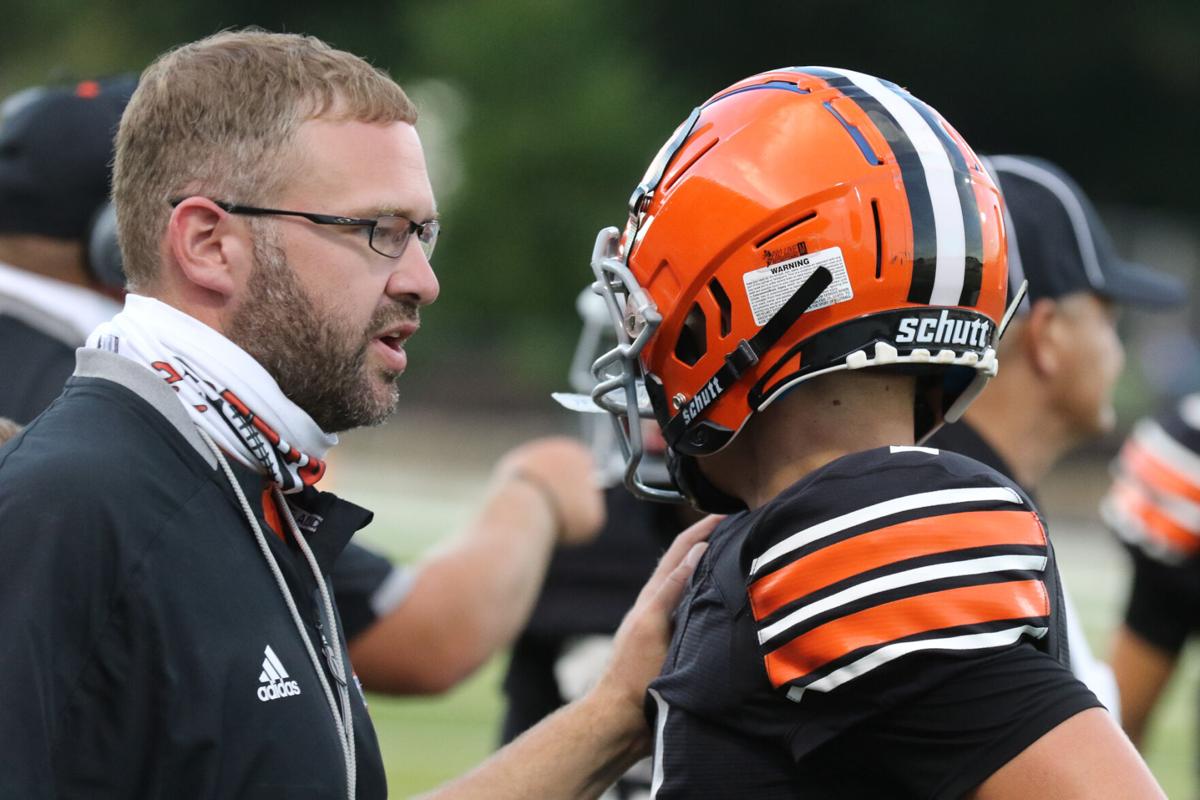 Tayden Carpenter talks with Ironton quarterback coach Dr. Jarrod Smith during a break in the action against Gallia Academy on Sept. 4. 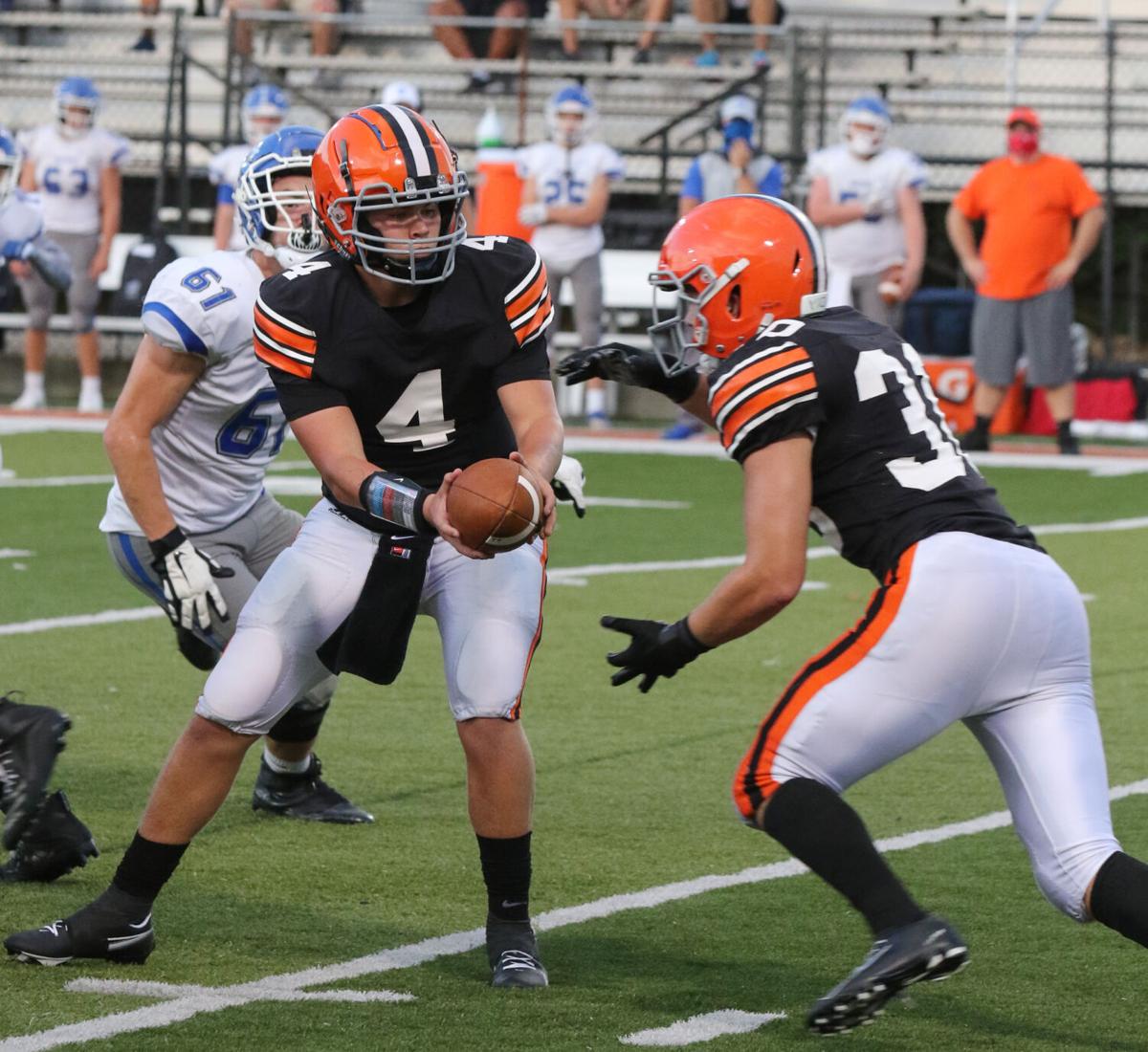 Ironton's Tayden Carpenter hands the ball off to running back Cameron Deere during a game against Gallia Academy on Sept. 4.

Ironton quarterback Tayden Carpenter looks on with quarterback coach Dr. Jarrod Smith during a Fighting Tigers game this season. Carpenter wears a cochlear implant on his right ear. Smith uses a device to amplify his voice during a game.

Tayden Carpenter attempts a pass against Gallia Academy on Sept. 4.

Ironton's Tayden Carpenter talks with his teammates during a game against Gallia Academy on Sept. 4.

Tayden Carpenter talks with Ironton quarterback coach Dr. Jarrod Smith during a break in the action against Gallia Academy on Sept. 4.

Ironton's Tayden Carpenter hands the ball off to running back Cameron Deere during a game against Gallia Academy on Sept. 4.

IRONTON Ironton already led by three scores, but the Fighting Tigers wanted more when they took possession of the ball at Coal Grove’s 32-yard line with just less than two and a half minutes to play in the first half on Friday night.

Two-minute drills are among the most chaotic situations in sports. The regular rhythms of football are accelerated. With less time to think, communication, intuition and preparation are paramount.

In other words, it was a perfect time for Tayden Carpenter, a sophomore in his first year quarterbacking Ironton, to showcase his growth into that job and justify his selection to fill it from a three-man race in the preseason.

A block in the back on first down pushed the Tigers back to the Hornets’ 42, but Carpenter got 19 yards on a second-down scramble. Two plays later, on first down, Carpenter hit slot receiver Landen Wilson with a flat route to the wide side of the field. He was tackled in-bounds for a gain of a yard.

Problem was, that kept the clock running with less than 30 seconds remaining in the half. Ironton had no timeouts and was still 12 yards from paydirt.

In this situation, you might typically hear coaches frantically yelling to the quarterback to get his team lined up and spike the ball to stop the clock. But Carpenter probably wouldn’t have heard them.

Carpenter is completely deaf in his left ear. He has a cochlear implant in his right ear, and Ironton quarterbacks coach Dr. Jarrod Smith wears a device around his neck during games that looks like a lapel microphone that amplifies his voice into that implant, but it’s “so-so” at best in terms of clear audible communication in game situations, Smith said.

And music over the public address system, the band, cheerleaders and the crowd — even a limited one due to COVID-19 — make hearing clearly less than a sure bet even for people with all or most of their hearing ability.

“It’s hard,” Smith said of two-minute drills, “because we obviously can’t just scream at him.”

Carpenter didn’t need the reminder anyway. He hustled the Tigers to the line and spiked the ball.

“Every practice we usually practice the two-minute drill, because in a tight game, it’s gonna happen,” Carpenter said. “It helps a lot when you practice a lot, because you’re not nervous in that situation.”

On third-and-9 from the 12, Carpenter rolled left and spotted Wilson for a touchdown pass. He’d marched Ironton into the end zone with 18 seconds to spare.

Carpenter’s predecessor, Gage Salyers, who helped pilot Ironton into last year’s state title game and then went on to the Division I ranks at Youngstown State, couldn’t have done it any better.

“He’s a very smart football kid,” Tigers coach Trevon Pendleton said of Carpenter. “He understands the game at a very high level, and a lot of that is because of his hearing impairment. Being able to have to visualize things more than relying on hearing has made him a very cerebral kid playing that position.

“A lot of people would say it’s a limitation, but I don’t think so. I think it’s a blessing.”

More than getting by

Carpenter lost his hearing when he was about 2 1/2 years old, he said. He functions around people who don’t sign with his cochlear implant, which he wears everywhere except to bed, and by reading lips — he politely asked a socially distanced reporter to drop his mask in an interview.

The expectation of coaches to be masked up during the pandemic, well-intentioned though that may be, has created another communication barrier for Carpenter.

“Coaches, they have to repeat everything twice and three times,” Carpenter said. “It’s a lot different than normal.”

The advent of calling in plays with hand signals from the sideline to players with play-sheet wristbands helps. Carpenter also frequently visits Pendleton and Smith, who stands close to the head coach when Ironton has the ball, between plays.

Smith then tilts his face down and read the play into the amplifier to make sure Carpenter has heard correctly. The OHSAA allows Smith and Carpenter to use the device at all times as a modification for his “disability,” but Smith typically resists the urge to walk Carpenter through reading a defense or a play “because it’ll kinda rattle him,” he said. “If we have to call a play in, we can call a play in, but that’s about all we’ll do with it.”

Besides that, Carpenter has shown aplomb on his own: he’s completed 24 of 32 passes for 362 yards, seven touchdowns and an interception in three games.

“I think Tayden is really further ahead than any sophomore I’ve ever been around in how he kind of intuitively knows where to go with the ball,” Smith said. “He feels pressure really well. But he’s always willing to learn and get better. I think that’s what sets him apart from most kids, he’s a really humble kid and willing to work his tail off to get what he wants.”

Smith has aided in that process, with his relationship with Carpenter and coaching philosophy on display Friday at Tanks Memorial Stadium against the Hornets.

“He’s kinda like my godfather a little bit,” Carpenter said of Smith. “Known him my whole life since I was a ballboy when I was a little kid.”

Carpenter and the Fighting Tigers got off to a slow start offensively, losing the ball on their first possession on a botched center-quarterback exchange and giving it away on their second trip when a Carpenter pass was deflected and intercepted.

Smith — a former South Point signal-caller who went on to play at Georgetown College and Tennessee — reminded Carpenter on the sideline that making mistakes is how quarterbacks learn.

“This is Tayden’s first bump in the road, a little bit of adversity,” Pendleton added after the game. “Now we get to see how he bounces back. Knowing the type of kid he is and how hard he works, I think he’ll be fine.”

If the two middle quarters Friday night are any indication, Pendleton is right: Carpenter finished 10 of 14 for 142 yards and three touchdowns in just under three quarters of work. With Ironton up big late for the third time in as many games, Carpenter got the fourth quarter off, except when he came in as the backup holder for an extra point after after the Tigers’ ninth touchdown of the night.

“Kinda nervous I was gonna drop it,” Carpenter said with a grin of his cameo at holder.

He didn’t, and after a scoreless first quarter, Ironton won, 71-0, to improve to 3-0 halfway through its COVID-19-shortened regular-season schedule.

“They’re studs,” he said. “It helps a lot when you have those people.”

Carpenter said he is working to improve his reads and throwing.

“As a sophomore especially, you learn a lot,” he said. “You make mistakes, and once you make that mistake, you know the next game what you’re gonna do with that.”

And because of his background, it seems hard-wired into Carpenter that he can capably continue that improvement.

“I don’t want to say the cards have been stacked against him for his life,” Smith said, “but he’s had to overcome some things that other kids may not have had to overcome. ... I kinda knew last year he was gonna be good. I think by the time he’s done here, he’s gonna be a special player.”