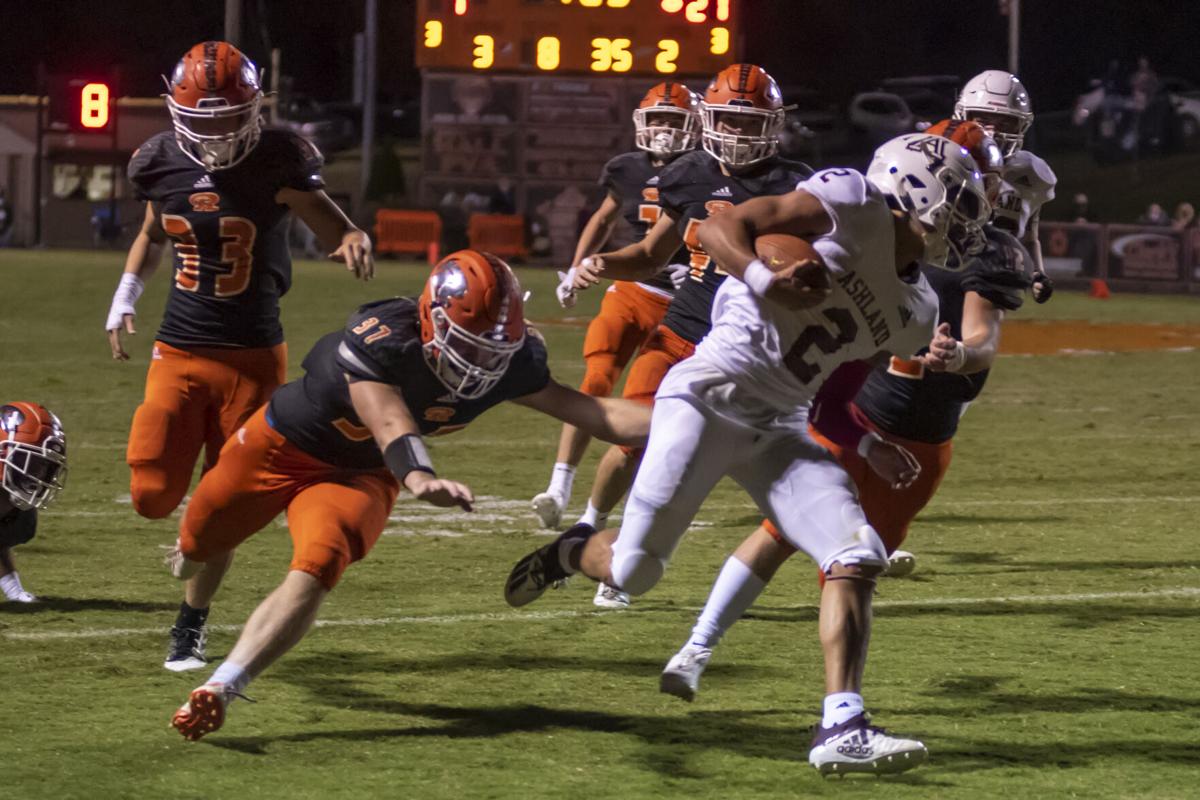 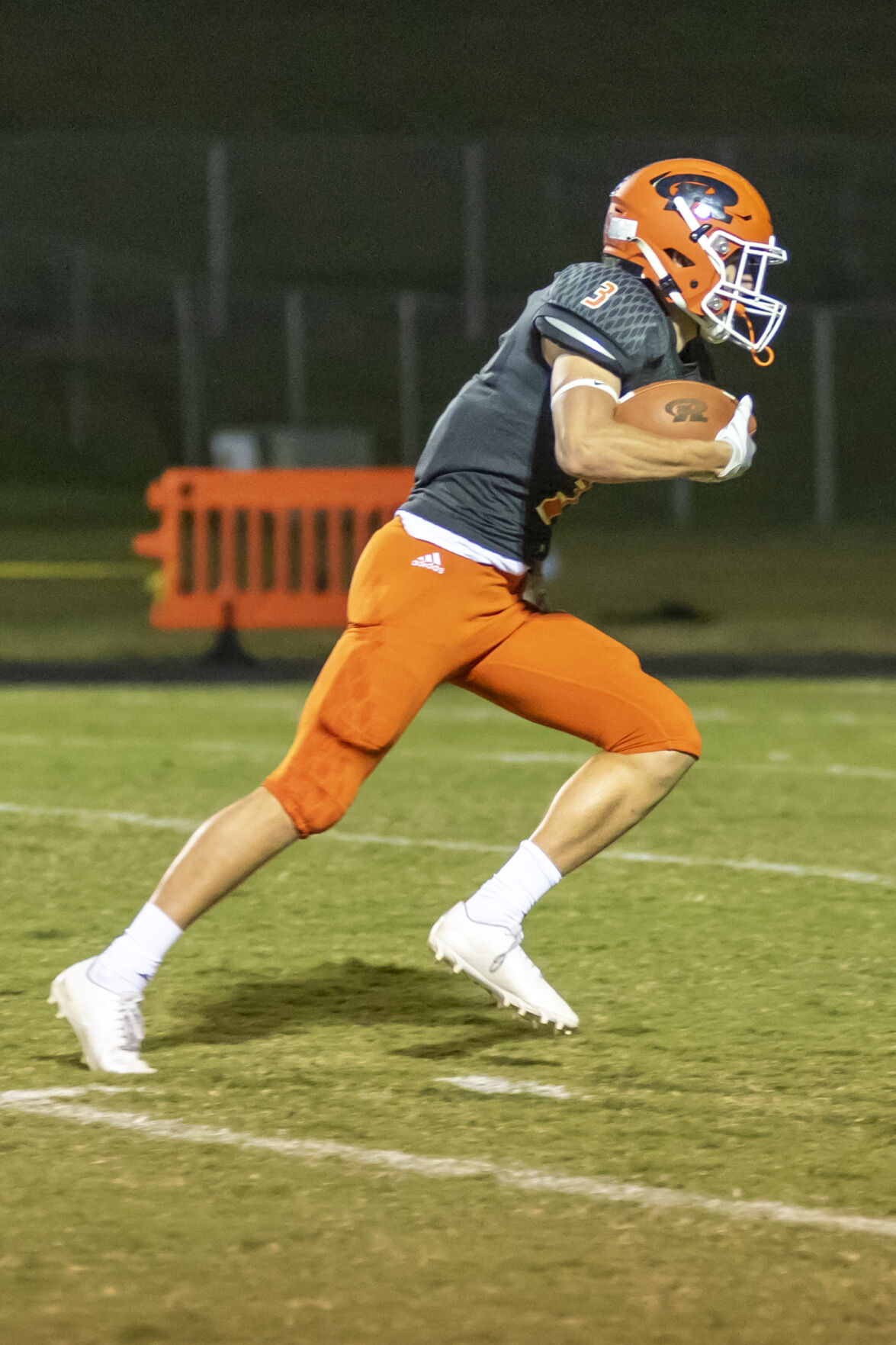 Raceland's Parker Gallion heads towards the end zone after a catch on Friday night against Ashland. 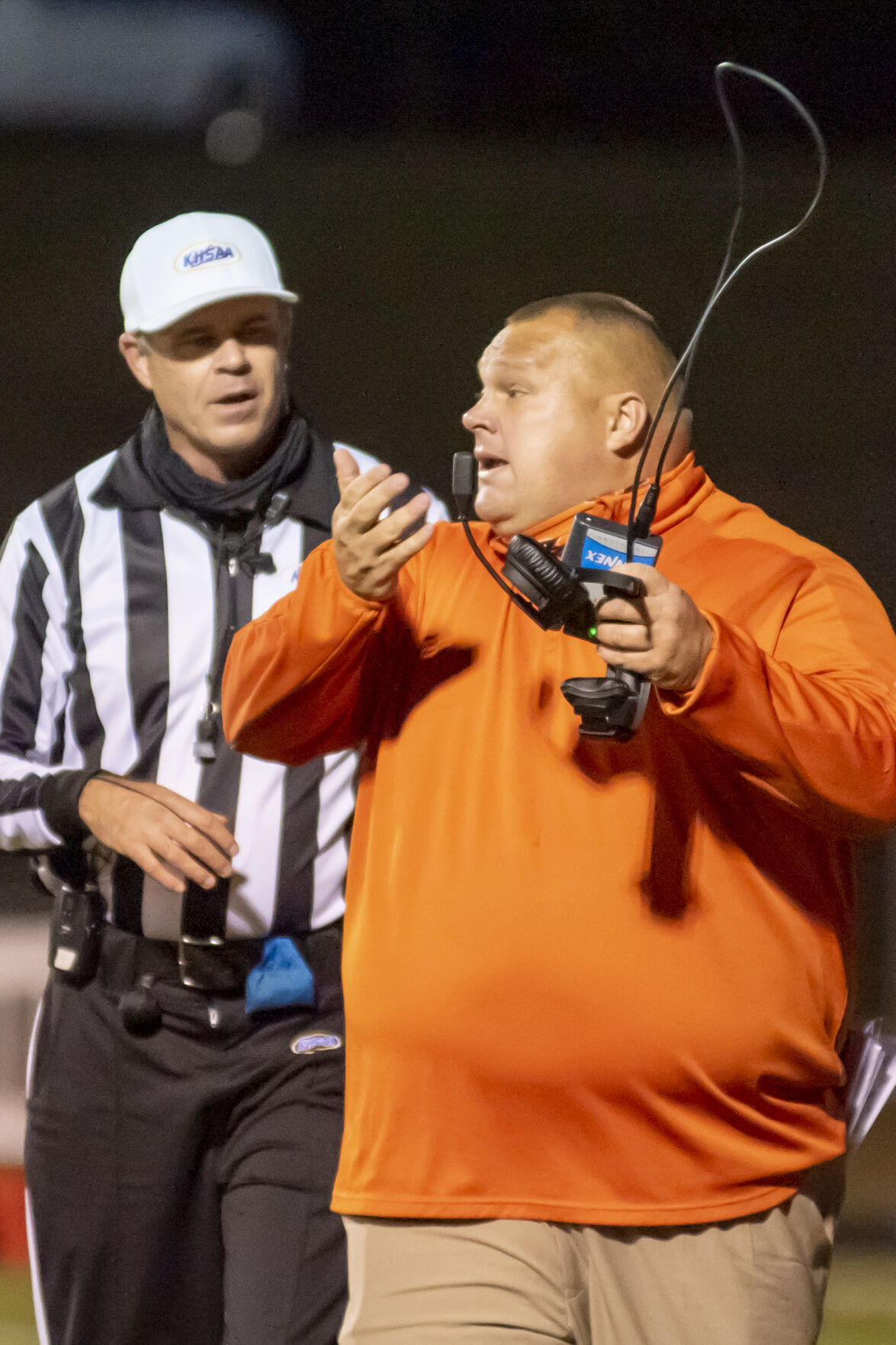 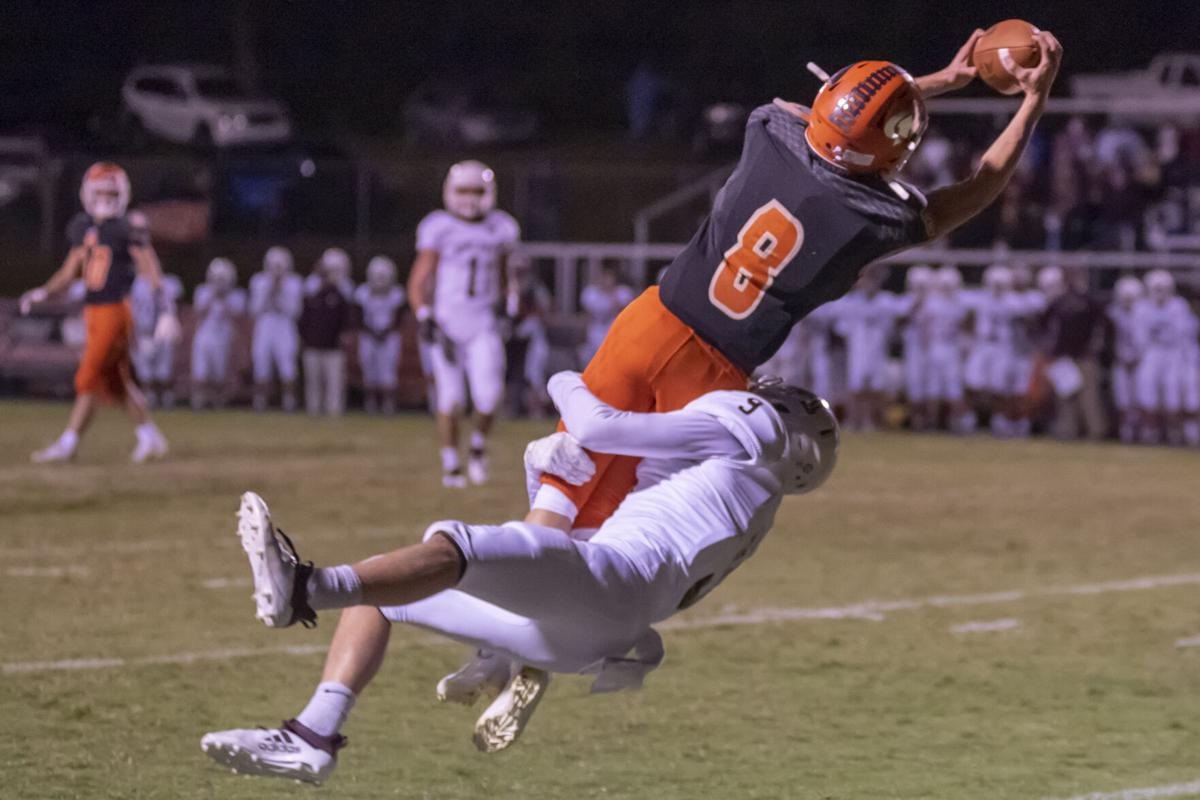 Raceland's Conner Hughes reaches up to make a catch against Ashland on Friday night. 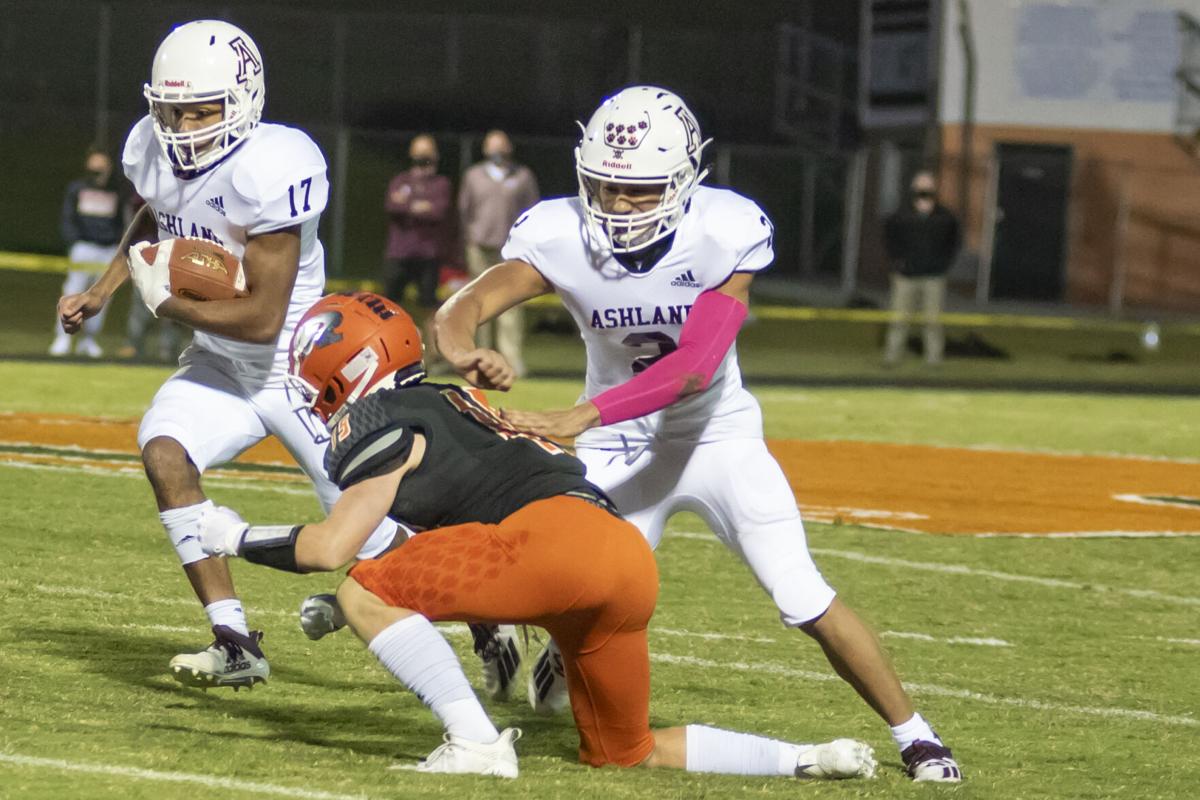 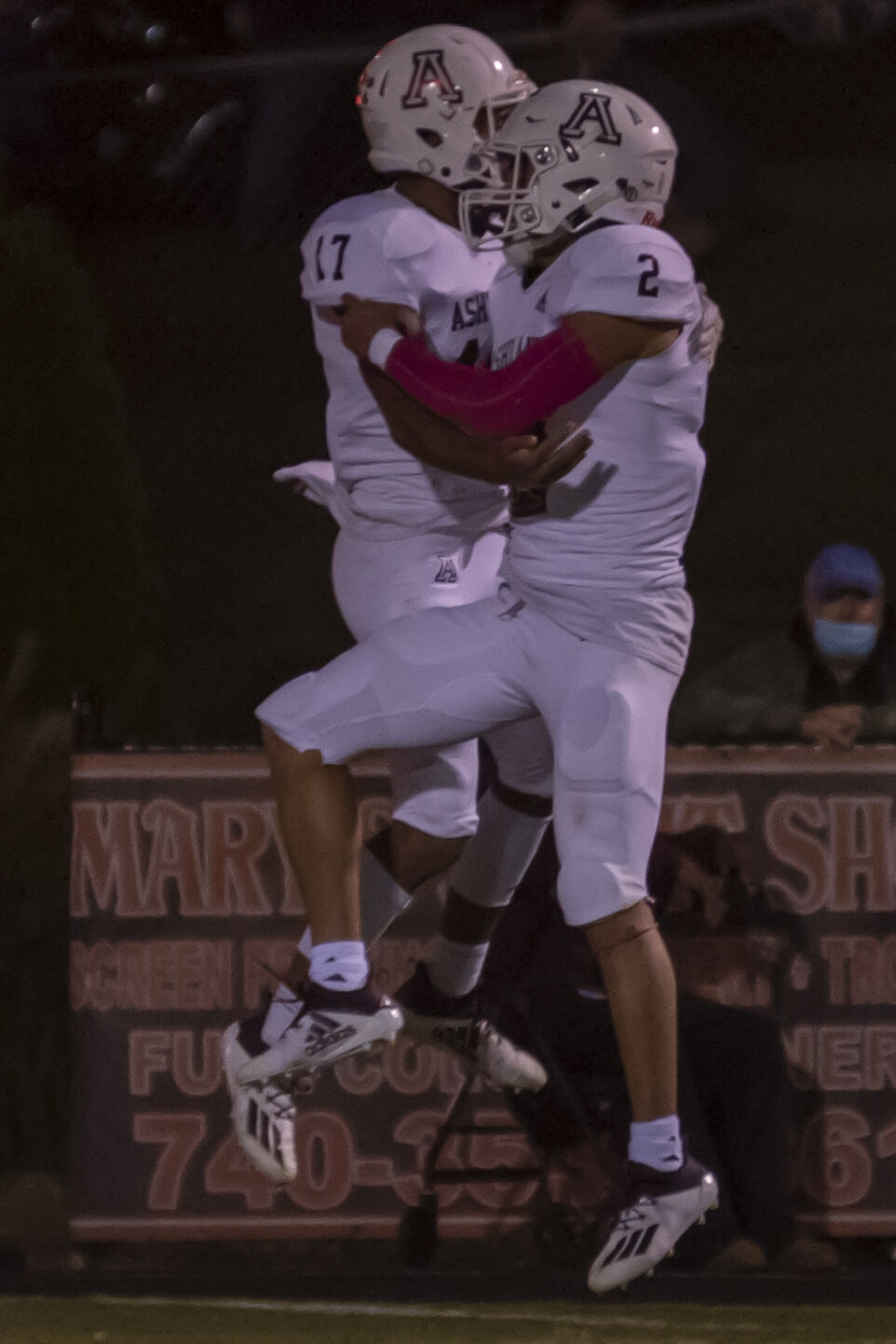 Ashland's Keontae Pittman (2) and J.T. Garrett (17) celebrate after a Tomcats touchdown against Raceland on Friday night. 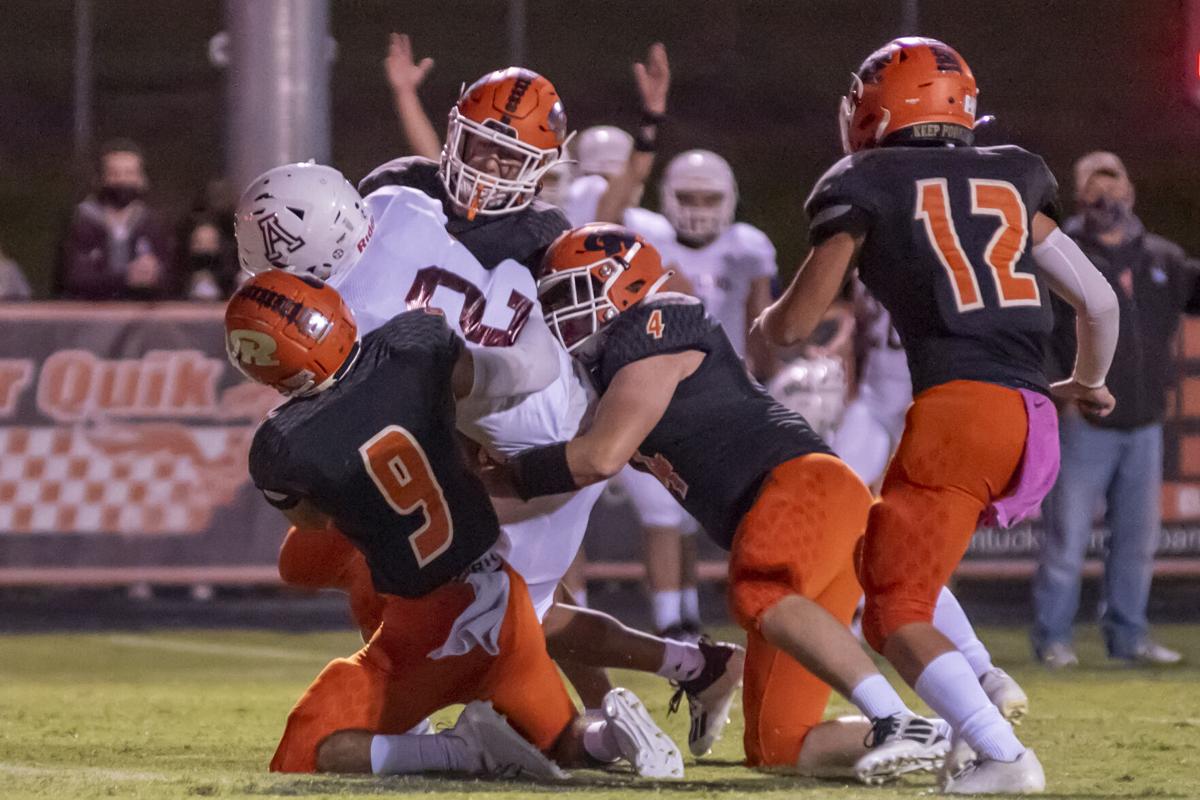 Ashland's Keontae Pittman is tackled by a host of Raceland defenders on Friday night. 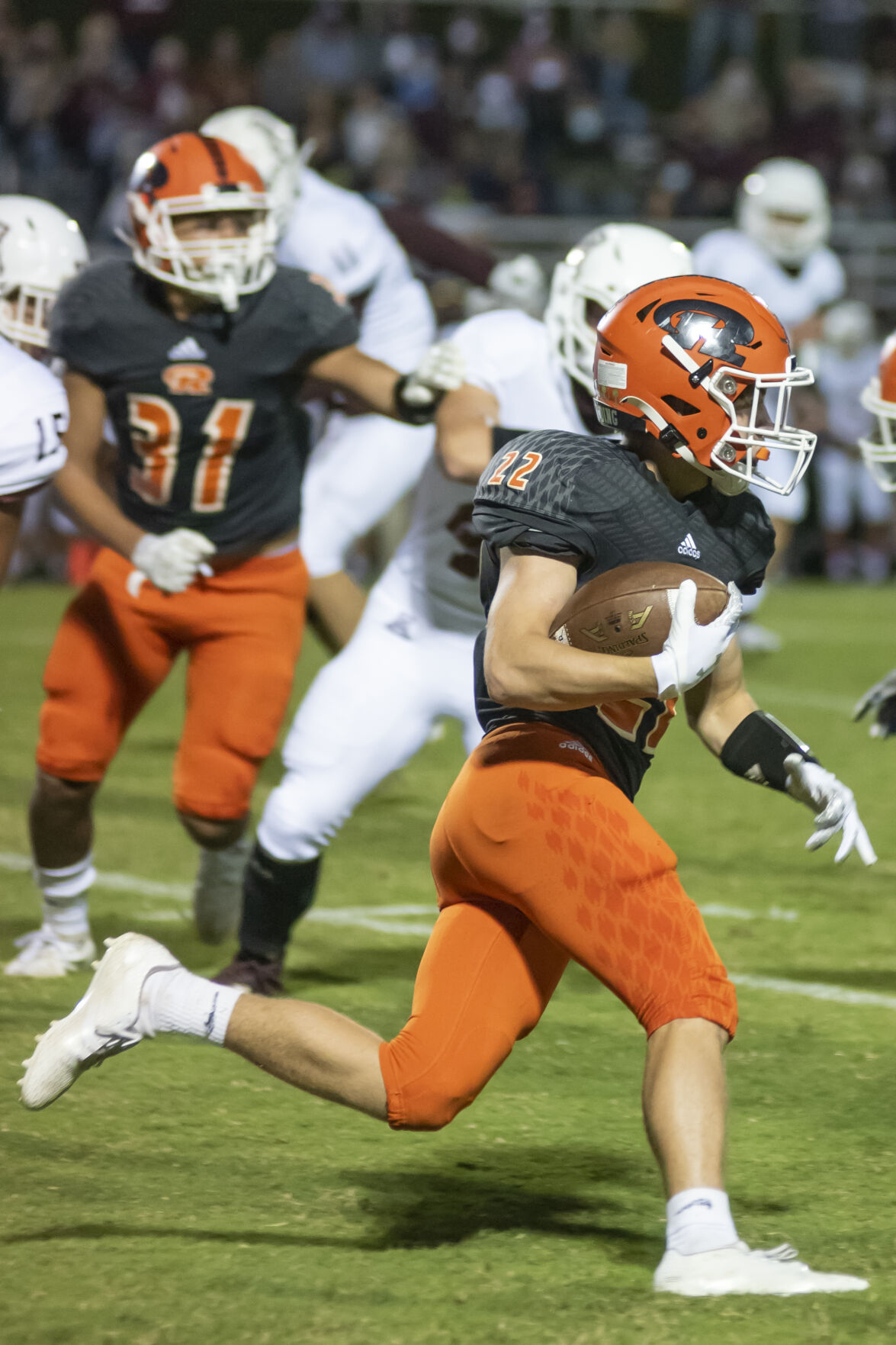 Raceland's Parker Gallion heads towards the end zone after a catch on Friday night against Ashland.

Raceland's Conner Hughes reaches up to make a catch against Ashland on Friday night.

Ashland's Keontae Pittman (2) and J.T. Garrett (17) celebrate after a Tomcats touchdown against Raceland on Friday night.

Ashland's Keontae Pittman is tackled by a host of Raceland defenders on Friday night.

RACELAND It was the 31st meeting between Ashland and Raceland on Friday night, but it was the first time the Tomcats played on the Rams home turf.

The visitors quickly got acclimated to the new surroundings and set up residence in the Raceland end zone. Ashland recorded touchdowns on their first seven possessions and cruised to a 50-15 victory at Rams Stadium.

Keontae Pittman compiled 143 rushing yards and scored four times during the Tomcats’ first-half offensive explosion. Garrett added scores on the ground and through the air. He accounted for 226 yards of offense and even completed a 43-yard pass to Jack Alley.

“I am very pleased with our execution,” Ashland coach Tony Love said. “It is something that we have tried to build over the years so that you don’t have a drop off when a big group of seniors leave. The consistency is a bit of a surprise. We have some good offensive linemen, some athletic guys.”

“They have some excellent skill guys around them to help,” he added, “and even make up for the mistakes when they have them.”

Ashland tallied 352 yards in the opening 24 minutes. Garrett ended the Tomcats opening, nine-play drive by hauling in a 35-yard touchdown catch from junior quarterback Brett Mullins that started a scoring blitz by both teams.

Raceland countered with a quick strike from Jake Heighton to Parker Gallion. The wide receiver got behind the Ashland defense and streaked 65 yards to paydirt. It would be the only score from the Rams in the first two quarters. Raceland would just gain another 44 yards before halftime.

“I think the adjustment came from the kids,” Love said. “Raceland is very talented. When you run routes in practice and not out here under the lights, the speed changes. We had to work out some things. Coach (Chad) Tackett does a great job staying calm with them, pointing some things out and letting the kids solve the problem. They did a good job with that.”

The Rams defense has struggled get off the field. Ashland converted on fourth down twice early in the contest as Raceland tried to hang on to the momentum and stay close.

“It’s been that way over the last month for us,” Raceland coach Michael Salmons said. “Last week at Greenup County, we gave up two touchdowns on fourth down. We have to get better. On those downs, we feel like we have to be better in those situations.”

Pittman was just getting started. The running back showcased his speed by opening the next Ashland (2-0) drive with a 49-yard rush down the sideline. Two plays later, he scored from 13 yards out.

The Tomcats called Garrett’s number again and he took the jet sweep 65 yards to the house with 4:51 left in the first frame. Pittman found the edge on his next march down the field. He made several defenders miss, spinning and bouncing off Rams on the way to the end zone.

Pittman added two more touchdown trips, including a 1-yd TD plunge just before halftime. With some many options, Love can throw a wrinkle or two into the game plan.

“I think that is key as you go through the season and into the playoffs,” Love said. “If you hang you hat on one guy, and for whatever reason he may not be there, you might get lost. We challenge these guys to spread the wealth a little bit and when somebody gets an opportunity, they need to jump on it.”

Heighton finished 16 of 27 for 205 yards and had two TD tosses for Raceland (1-3). He connected with Parker Fannin for a 38-yard touchdown in the fourth quarter.

The Rams never shy away from playing a tough slate of games. Raceland plans to keep making strides as important games still exist on the horizon.

“We play a very good schedule,” Salmons said. “Pikeville and Ashland, that’s two undefeated teams. I feel this is what makes us better. Hopefully, what we put our kids through in the first month, we will see when it matters the most. I think we have put our team in every one of those positions. We will learn from it and keep growing.”

“When we play for higher stakes, we’ll see if we can step up and make the plays that we haven’t made in the first month,” he added.

Ashland will finally get to return to the friendly confines of Putnam Stadium next Friday. The Tomcats will honor their seniors before the game with East Carter.

“I don’t know if words can express how excited we are to get to Putnam Stadium,” Love said. “It was great to have our scrimmage there. It’s going to be different having the maroon and white on and coming down the catwalk. All the things that these kids look forward to that makes it a special place.”