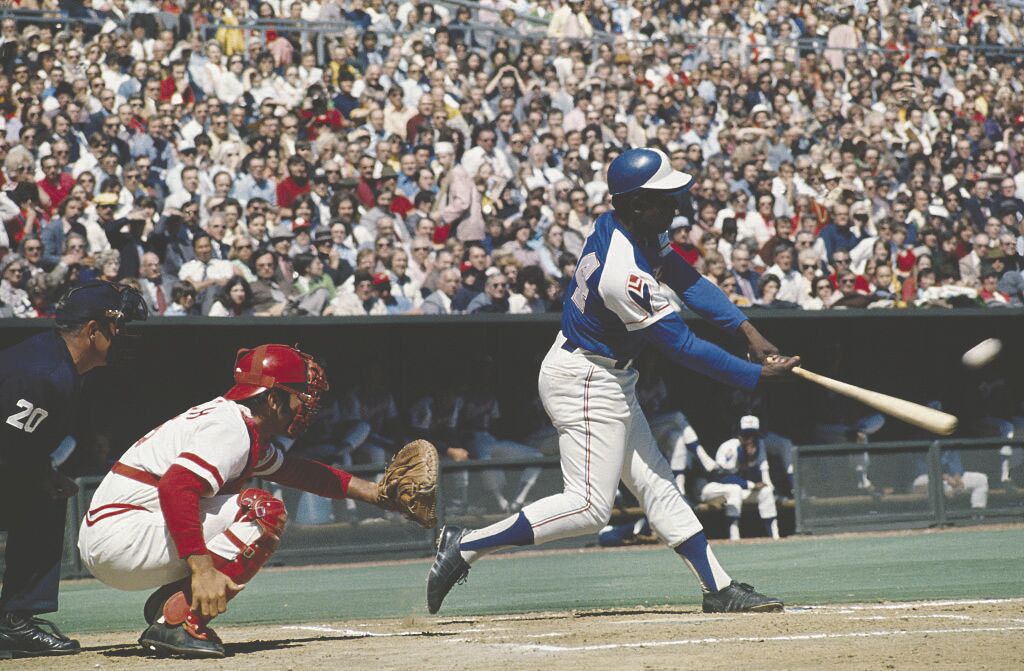 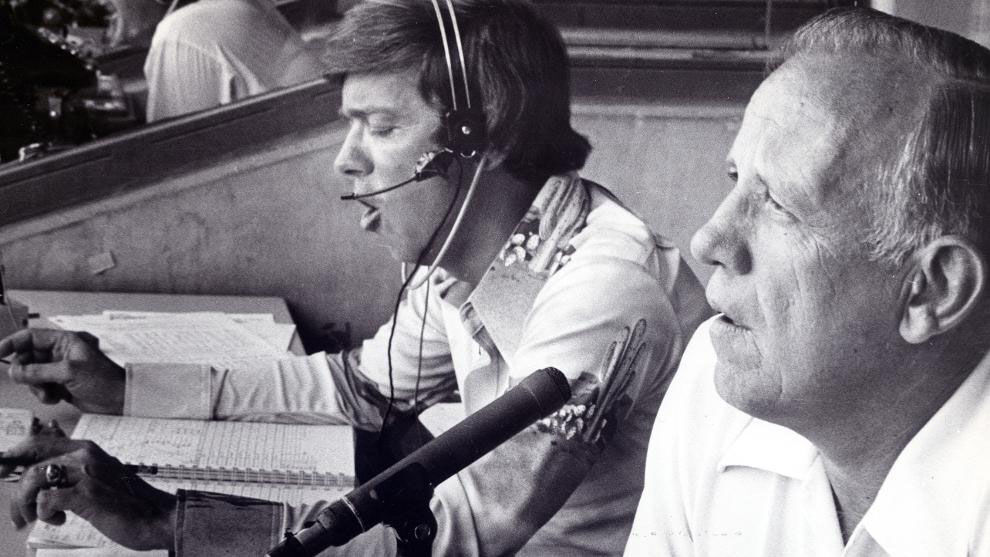 A young Marty Brennaman makes a call during the 1974 season, his first in the Reds radio booth, next to Joe Nuxhall, right. CINCINNATI REDS PHOTO

A young Marty Brennaman makes a call during the 1974 season, his first in the Reds radio booth, next to Joe Nuxhall, right. CINCINNATI REDS PHOTO

April 4, 1974, is the day that two future Hall of Famers would surely remember — one of them on the backside of his career, a 40-year-old already a sure bet for Cooperstown; the other was a 31-year-old rookie new to the Queen City, just called up from the Triple-A Tidewater Tides.

One swung a bat. The other could paint a picture of the game with a microphone like no one else, so that his radio listeners could feel like they were in the ballpark.

Hank Aaron ended the 1973 season with 40 home runs, just one short of tying Babe Ruth’s all-time record. In Virginia, Marty Brennaman wrapped up his third season announcing baseball games for the Tides, a farm club of the New York Mets. After the last day of the season, Aaron continued getting death threats from racists not wanting Ruth’s record to be broken by a Black man. Things were rosier for Brennaman, who was offered the job of sitting next to Joe Nuxhall in the Cincinnati Reds radio broadcast booth.

Just four batters into his first game, Brennaman made this historic call: “Outfield shaded around left for Aaron, Jack Billingham with a pause, the 3-1 pitch; swung on, long shot into deep left field, Rose is back, and that ball is gone. A long home run. Henry Aaron has just tied Babe Ruth’s home run record of 714 with a clout over the 375 marker in left field.”

All left fielder Pete Rose could do was watch the line drive Aaron hit with his first swing, whisk over his head in the same stadium that he would become the all-time hits king in 11 years later. “714” flashed in giant numbers on the huge Riverfront Stadium scoreboard. It was a standing-room-only standing ovation. Media from across the country were in Cincinnati to soak up the history. Important dignitaries were present and the game was stopped after the milestone blast. Just 249 days before Vice President Gerald Ford became president when President Richard Nixon resigned, he offered kind words to the man of the hour. Ford then handed the microphone to MLB Commissioner Bowie Kuhn as the festivities continued.

“That was quite a way to start off a career,” Brennaman said of getting to call Aaron tying Ruth’s record. “Well, it was a great game to begin with. The Braves had a lead late and Tony Perez hit a home run in the eighth inning to tie the game. And then Pete Rose scored all the way from second base on a wild pitch in the 10th inning. I think it was, 10th or 11th. It was an extra-inning game and the Reds won the game, and so it was a game that a little bit of everything in it.”

“They didn’t take him out of that game. He didn’t play anymore the rest of the series,” Brennaman said. The Braves wanted the record to happen in Atlanta, and Aaron may have not have even been playing if Kuhn hadn’t made him play in Cincinnati.

“That was his first and then he got his 20th home run against the Reds,” Brennaman said.

Just four days later, Aaron sent another 3-1 pitch — this time from Los Angeles Dodger Al Downing — into the history books. A new home run king was crowned.  Just like in Cincinnati, Aaron smashed the ball over the left-field wall, this time a 385-foot shot in Atlanta-Fulton County Stadium for No. 715.

“The closer he got to the record the greater degree of death threats and hate mail and such as that. There were a lot of people that didn’t want him to break the record because he was a Black man,” Brennaman said. “I don’t know whether he got any (death threats) in Cincinnati, but I would suspect he probably did. I mean there’s no reason to believe that he got them from all over the place why he wouldn’t get them in Cincinnati when he came into town.”

Aaron went 0 for 5 in his major league debut, and ironically that was against “the old left-hander” Nuxhall, at Cincinnati’s Crosley Field on April 12, 1954.

In 1955, Aaron made his first of a record-tying 24 All-Star Game appearances.

Aaron finished his career with 755 home runs. On Aug. 7, 2007, Barry Bonds passed him with his 756th homerun. He finished with 762. Many in the baseball community have frowned upon that record. In 2003, Bonds was implicated for using steroids. After an eight-year investigation, Bonds was sentenced in 2011 in San Francisco to two years probation, 250 hours of community service, a $4,000 fine and 30 days of home incarceration. He was found guilty of misleading a jury when answering questions about steroids.

Recently, the Hall of Fame began including statistics from Negro League games from 1920-1948. In 26 games with the Indianapolis Clowns, Aaron hit five homers and had a .366 batting average. Those statistics will not go with Aaron’s MLB statistics because they are from 1952. When Aaron retired in 1976, he was the last player on an MLB roster who played in the Negro Leagues. Aaron died on Jan. 22 in Atlanta.

Prior to joining Nuxhall, Brennaman was the announcer for the Virginia Squires of the American Basketball Association, which merged with the NBA. He announced various other sporting events and a Kentucky Wildcats TV Network announcer. He considers his Aaron call one of his favorites.

The Reds family recently lost two of its greatest with the deaths of Joe Morgan in October, and Tom Seaver in November.

Brennaman said, “The two seasons Joe Morgan was the best player I have ever seen, when he won the MVP awards in 1975 and 1976. He could beat you every way there was to beat you, with power, with speed, with his defense, a stolen base. He had the whole package.

“As far as Seaver was concerned, he was in a class all by himself. He was the best pitcher of his era without any question. When he came over in the trade from the Mets to the Reds, he didn’t miss a beat. I mean, he was just a dominant pitcher in a Reds uniform, was very popular here, very successful here, a great competitor, and a very bright guy, intellectually bright. He could articulate the art of pitching in a manner that people could understand it. He loved to talk about pitching. He loved to talk about his profession. He was just a really special guy.”