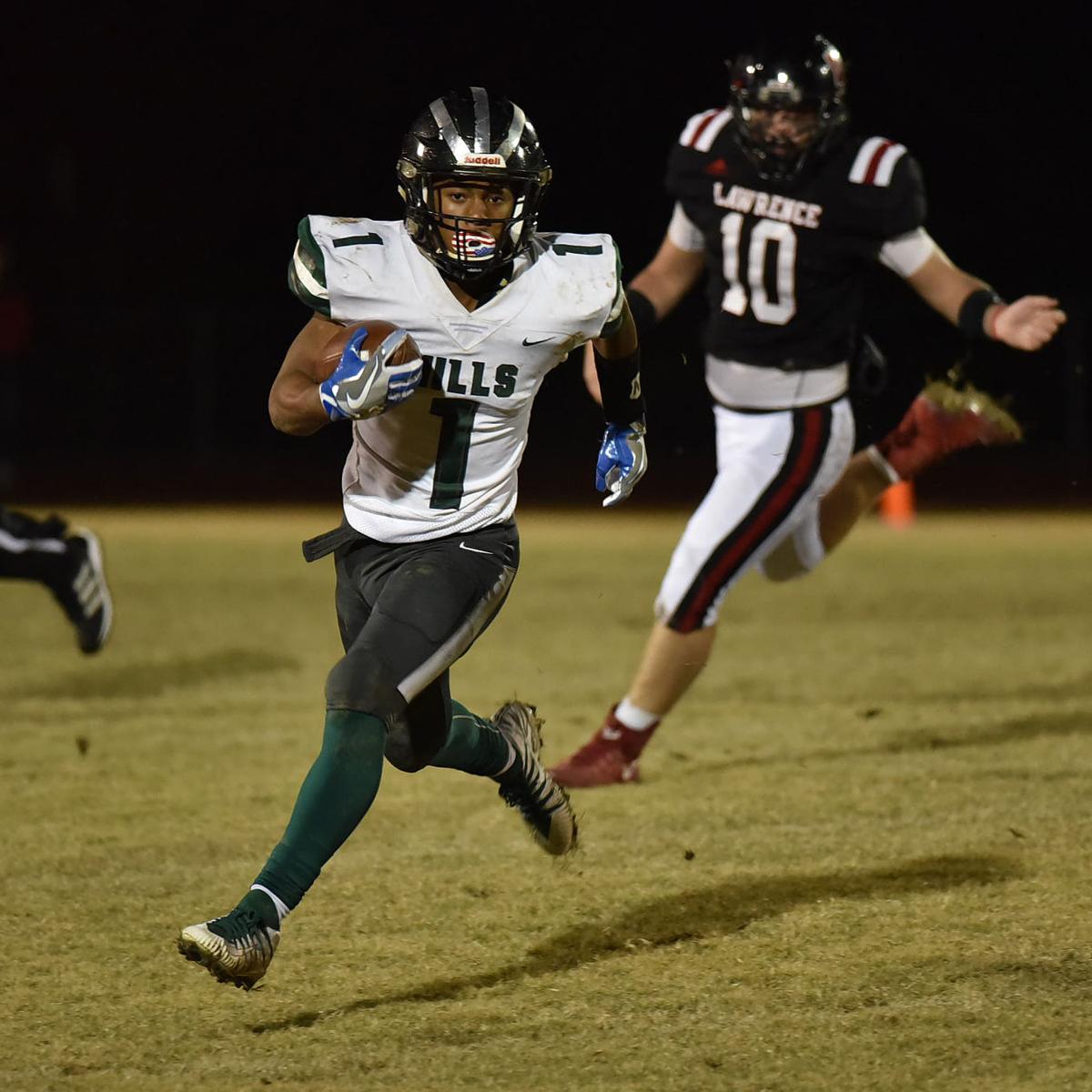 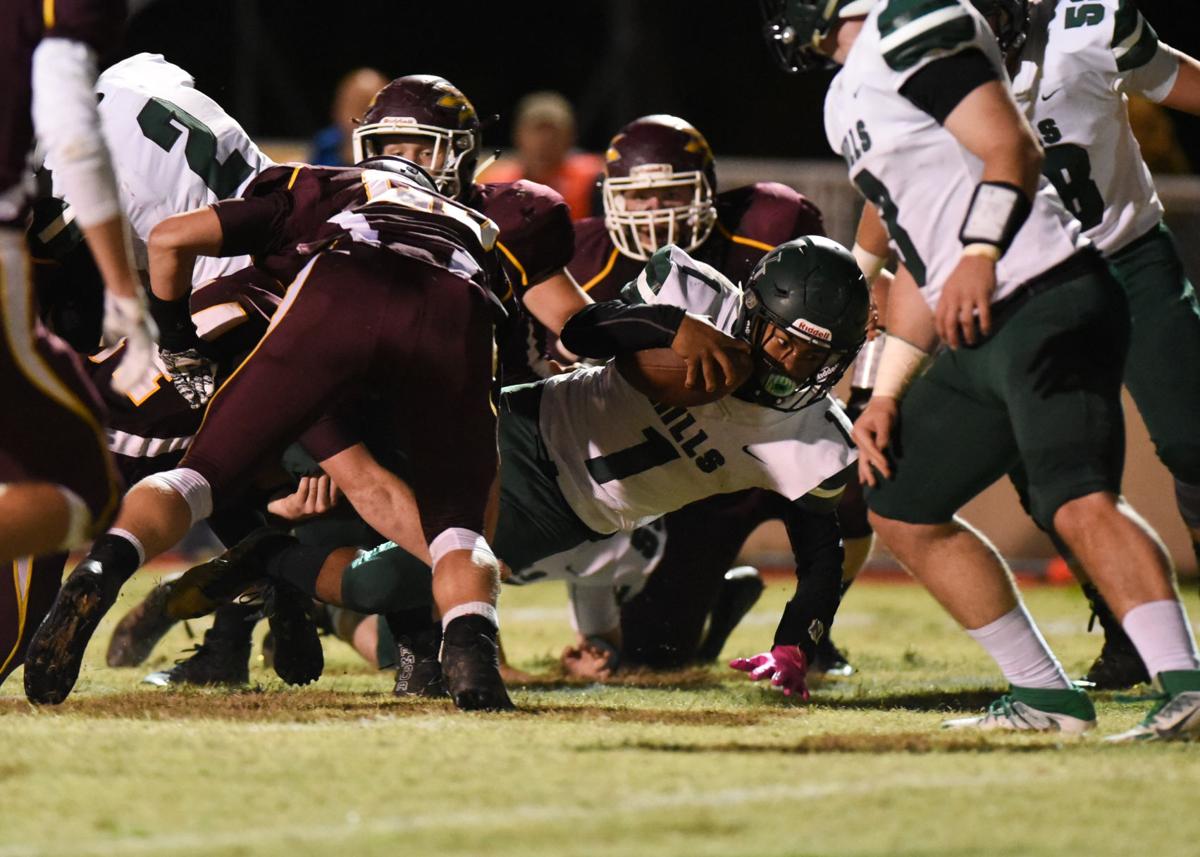 Wan'Dale Robinson of Western Hills stretches for extra yards on Friday against Russell. MARTY CONLEY/ FOR THE DAILY INDEPENDENT

Wan'Dale Robinson of Western Hills stretches for extra yards on Friday against Russell. MARTY CONLEY/ FOR THE DAILY INDEPENDENT

Kentucky’s offense was stale and stagnant for most of the second half of the Citrus Bowl against Iowa on New Year’s Day. When the Wildcats took possession at their own 20-yard line with 3:43 to play, trailing the Hawkeyes 17-13, they’d punted, committed a turnover or given it away on downs every time they had the ball after halftime.

Kentucky needed something it hadn’t gotten since its first possession of the game — a touchdown.

TJ Maynard, watching the game on TV, had the answer.

“I was thinking, hey, get the ball to Wan’Dale!” Maynard said, laughing.

Maynard had, of course, seen that formula work up close and personal, coaching Russell against Wan’Dale Robinson and Western Hills in the first round of the 2017 Class 3A playoffs.

Robinson ran 26 times for 189 yards and three touchdowns that night and also had the Wolverines’ only reception, a 10-yard TD to secure a 29-20 Western Hills victory over the Red Devils.

But considering what Maynard had seen Robinson do in person four weeks earlier, he didn’t mind that stat line.

Russell was idle on an early-October Friday night, having made the long trip to Pendleton County for a district game the night before. So Maynard went to see Lexington Catholic host Western Hills, anticipating the Red Devils might see the Wolverines and/or the Knights in the postseason due to the crossbracketing playoff format the KHSAA used at the time.

Maynard got an eyeful: Robinson torched Lexington Catholic for seven total touchdowns and 341 yards of offense, in addition to 231 yards on kickoff returns, according to reporter Ron Harrison.

“We left that thing thinking, there’s no way we’re gonna tackle this guy,” Maynard said. “We didn’t know if we could even two-hand touch him going into the game.”

A year to the week after Western Hills’s victory at Russell, the Wolverines traveled to northeastern Kentucky again for the first round of the postseason, this time to Louisa.

A day earlier, Robinson had announced his commitment to play collegiately at Kentucky. Even before that, Lawrence County’s coach knew well the Bulldogs had a mighty task trying to keep from being gashed by Robinson.

The Bulldogs indeed kept Robinson from returning the opening kickoff to the house but paid for it by conceding possession at midfield. Didn’t matter.

“The first time he touched the ball on a counter play, he takes it for a 50-yard touchdown,” Short correctly recalled. “You can’t simulate that speed and that athleticism.”

Robinson was off on his way to a 360-yard, five-TD performance that also included seven two-point conversions.

Fortunately for Lawrence County, if Robinson had a monster game, Noah West assembled a Godzilla performance. The Bulldogs quarterback rushed for 396 yards, seven touchdowns and nine two-pointers as well as the game-clinching interception as Lawrence County outlasted Western Hills, 78-74.

Like Maynard, all things considered, Short could live with what might have ordinarily been a humbling glance over the box score.

“The goal for every game is to score more points than the other team. It doesn’t matter if it’s 3-0 or 78-74,” Short said, “so we feel very blessed and very fortunate that we were able to come out of that on top. It could’ve very easily gone the other way.”

In fact, Short suspects it would have if Western Hills had approached its final two drives a bit differently.

“We’ve joked as a staff repeatedly over the last four years, if they would’ve just handed (Robinson) the ball twice instead of trying to throw it to him, we feel like we would’ve been in big trouble,” Short cracked. “(Then-defensive coordinator) John Caudill still jokes about that.”

While Lawrence County’s best opportunity to neutralize Robinson was to simply keep scoring, a year earlier Russell set out to do its best to hem in Robinson.

The Red Devils game-planned to rally as many defenders to the ball as possible and try to wreak havoc up front to keep Robinson from getting clear running lanes, Maynard said, “because if it’s just one guy there (to try to tackle Robinson), it’s over. He’s gonna make that guy miss.”

It worked well enough to keep Russell competitive against a player well on his way to proving himself as a generational talent, even as Robinson punched enough holes in it to win and advance.

Western Hills and Robinson also played Bath County in a home-and-home in 2017 and ‘18. The Wolverines beat the Wildcats, 64-26, in Frankfort in 2017, led by Robinson’s six scores and 354 yards of offense.

The next season in Owingsville, Western Hills topped Bath County again, 20-0, but the Wildcats held the Wolverines nearly 20 points less than their per-game average. Robinson rushed for 248 yards and two TDs and was shut out in the passing game.

Then-Bath County coach Johnny Poynter didn’t share the enthusiasm his colleagues at Russell and Lawrence County did for the experience of coaching against Robinson.

“It was just another game to me,” said Poynter, who spent 2021 as an assistant at Madison Central. “I have played against other players that have been in the NFL.”

WKCA broadcaster Rob McFarland was enthralled with a play Robinson made against the Wildcats in 2017.

Due to a lack of space in the Western Hills press box, according to McFarland, he and fellow Bath County announcer Todd Waits called the game from field level behind an end zone. Being on even ground with Robinson gave McFarland a better appreciation for his elusiveness.

“The cut he made had to be seen to believed,” McFarland recalled. “Full speed, full stride, 90 degrees. (Bath County’s Landan) Swartz was in full pursuit 110% and Wan’Dale pulled away from him without issue.”

McFarland remembers Robinson’s impact in the second game being more on the defensive side of the ball from his safety position, keeping Swartz, one of the state’s top rushers, from breaking free in Bath County’s double-wing offense.

Lawrence County’s shootout win over Western Hills was Robinson’s final high school game. He initially reversed his commitment to the Cats to play his first two collegiate seasons at Nebraska before transferring back home.

This fall, Robinson set Kentucky single-season records with 1,334 yards on 104 receptions and capped his junior season with 10 receptions and 170 yards in the Citrus Bowl against Iowa.

As Maynard and Short might have foreseen, Robinson caught four passes for 86 yards on the last-ditch drive, including a 52-yard elusive catch-and-run to the Hawkeyes 1 that set up Chris Rodriguez’s game-winning TD run.

As time has passed since Robinson’s three trips to northeastern Kentucky to play, his accomplishments have only made defensive efforts against him at the time look better, Maynard said.

“To see the type of performance he did in the SEC at Kentucky, you look back and say, ‘How did we hold him to what we did?’” Maynard said, “because he was a phenomenal talent.”

“He’s been a playmaker at every level,” said Maynard, who like Robinson wore Kentucky’s blue and white. “I’m really excited for him, being an ex-UK player, for his opportunity to play at the next level.”

Short retains great respect for Robinson’s game-breaking ability, but that wasn’t the most enduring part of their encounter on a cool November night in Louisa, he said.

Robinson took time to greet kids seeking a moment with a future Cat, even after the loss that ended his high school career.

“I couldn’t even really congratulate him on a great career because there was such a line of youngsters wanting to touch him, and he accommodated every single one of them,” Short said. “Even from an early age, he was a standup human being as well as a great athlete and a great football player.”