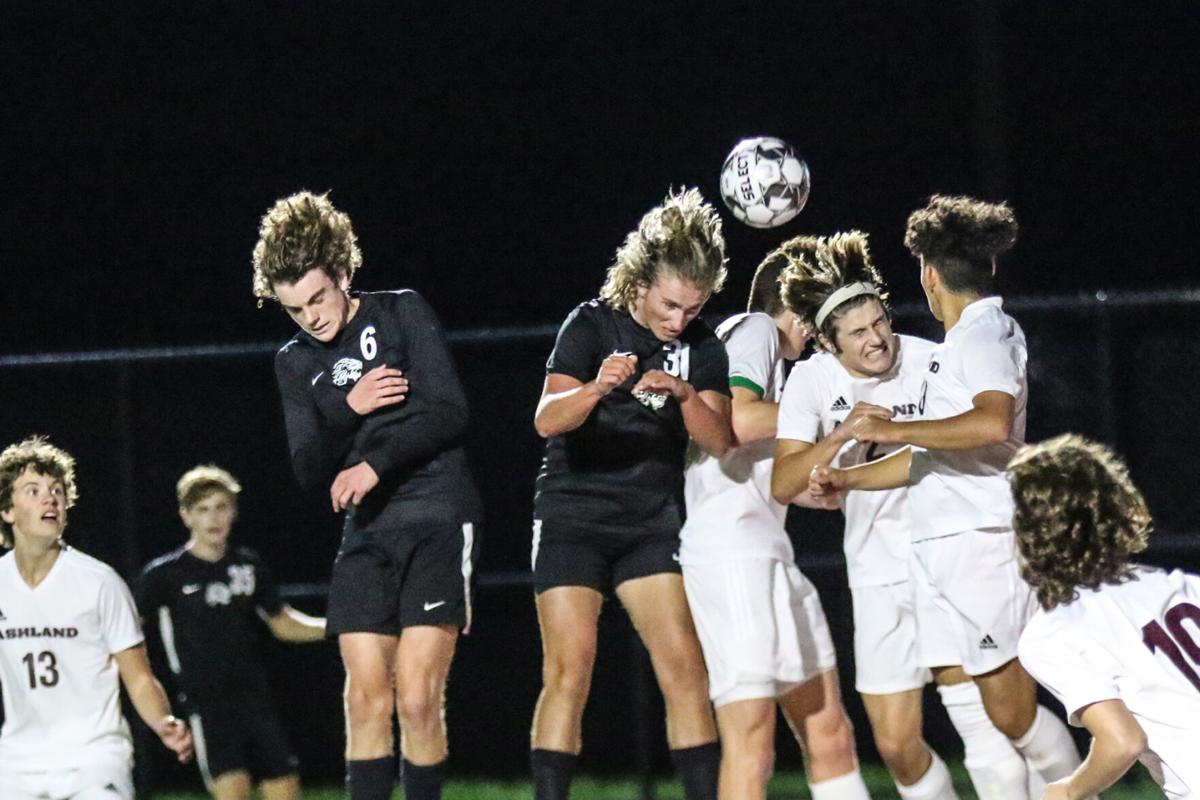 Boyd County’s James Terrill, 6, and Jonathan Stevens attempt to get a head on a cross from a corner skick during the first half of Wednesday’s match against Ashland. Ashland defenders, from left, Ben Acuff, Drew Clark and Santiago Gutierrez clear the ball. 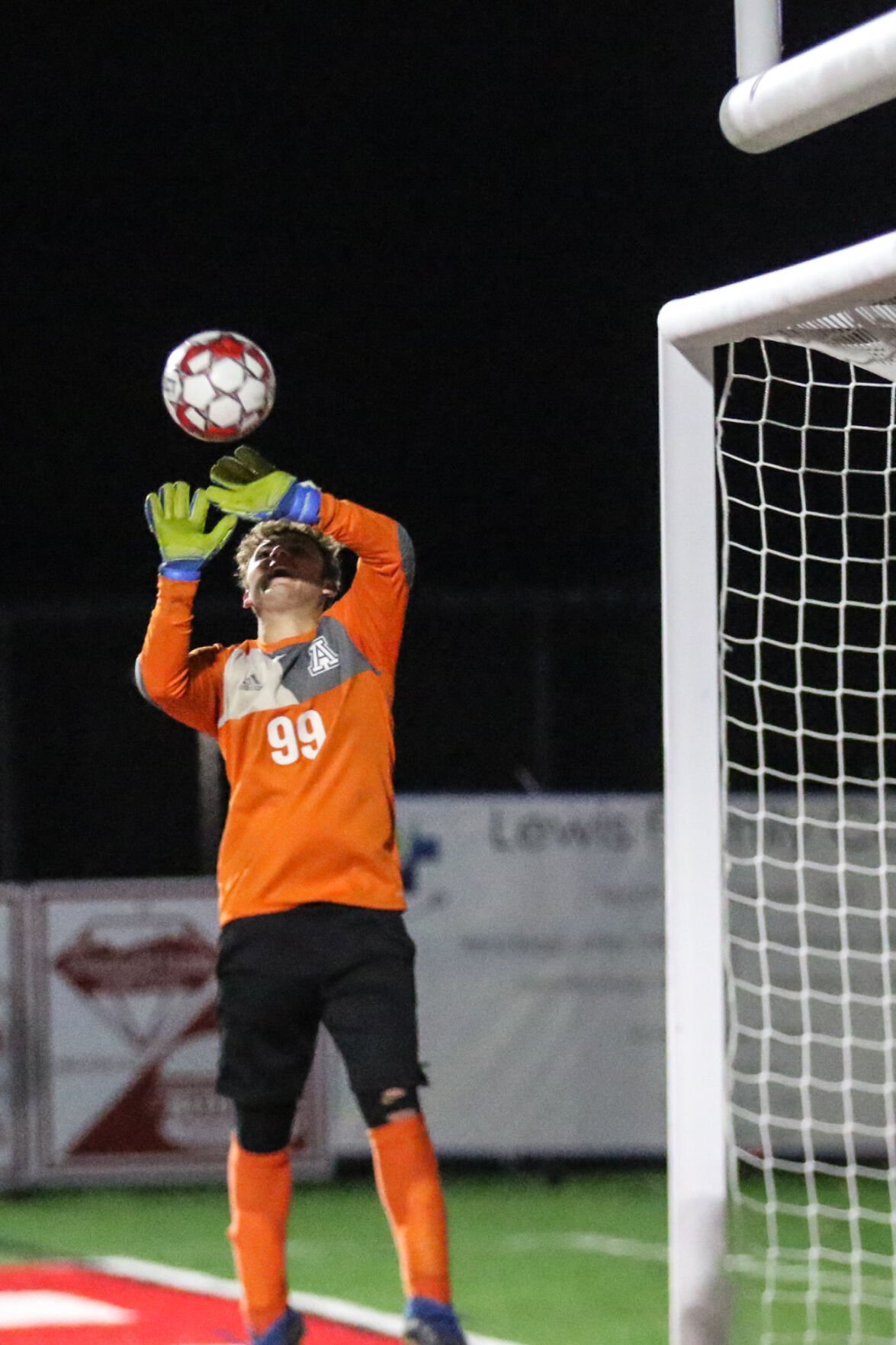 Ashland’s Matthew Jimison saves by pushing a ball over the crossbar. 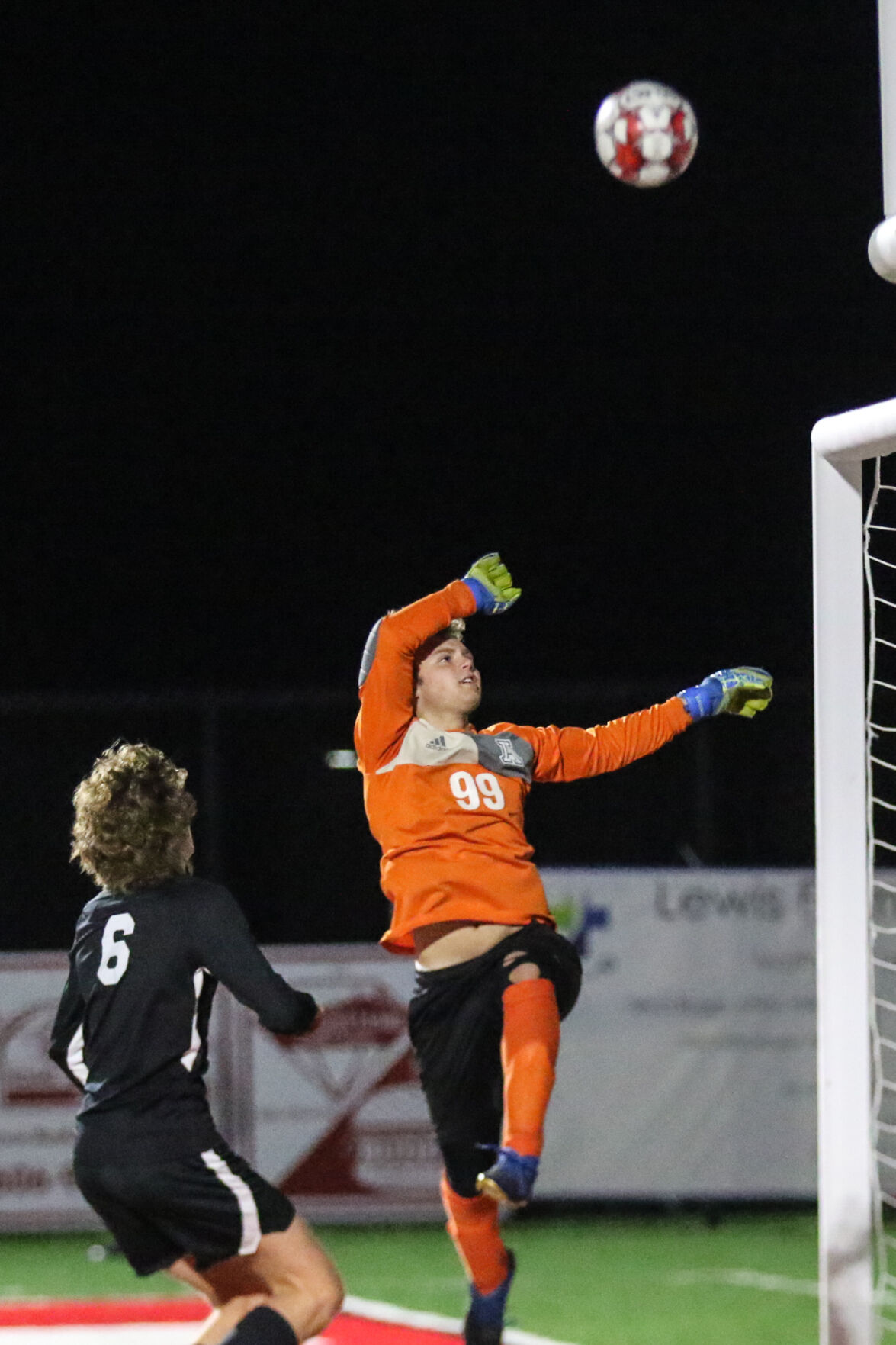 Ashland’s Matthew Jimison watches his save soar over the crossbar and out of bounds for a corner kick as Boyd County’s James Terrill closes in. 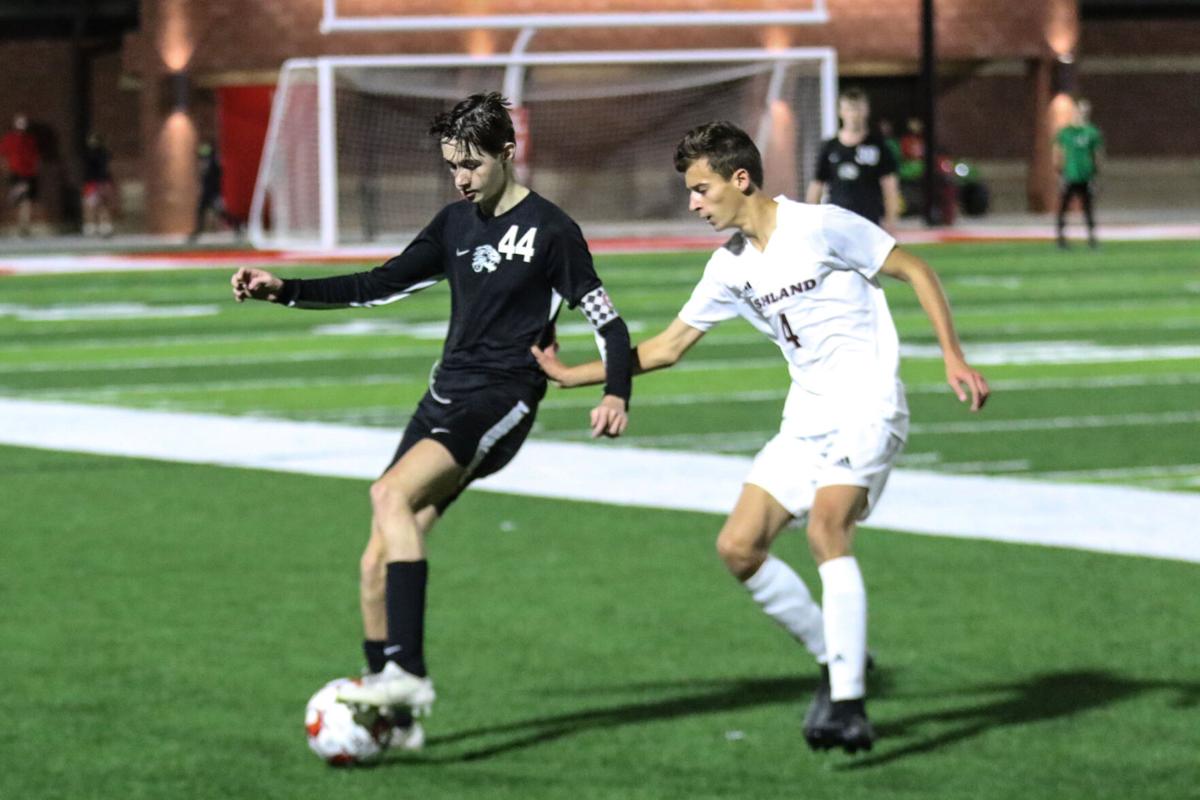 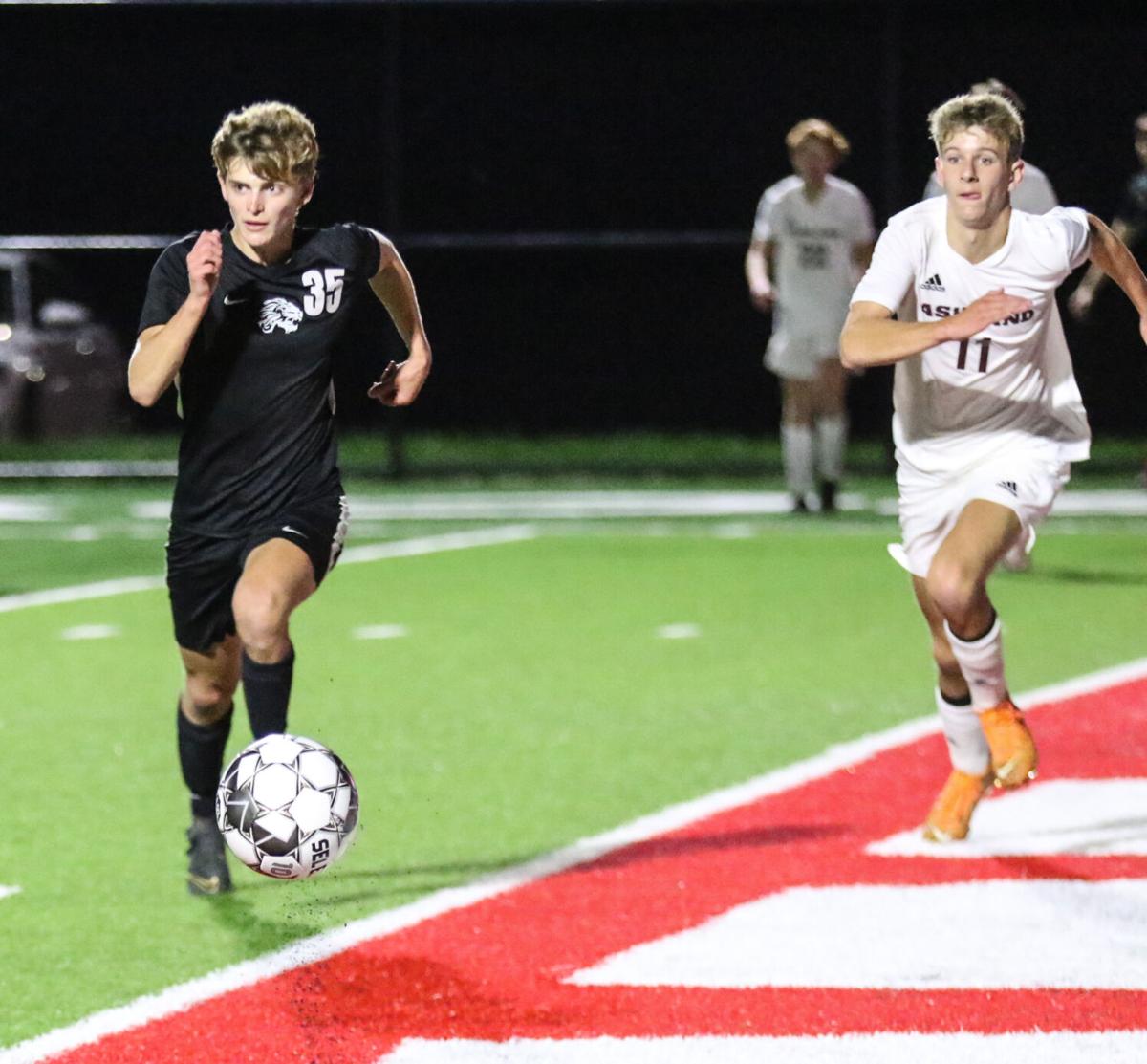 Boyd County’s James Terrill, 6, and Jonathan Stevens attempt to get a head on a cross from a corner skick during the first half of Wednesday’s match against Ashland. Ashland defenders, from left, Ben Acuff, Drew Clark and Santiago Gutierrez clear the ball.

Ashland’s Matthew Jimison saves by pushing a ball over the crossbar.

Ashland’s Matthew Jimison watches his save soar over the crossbar and out of bounds for a corner kick as Boyd County’s James Terrill closes in.

The Lions won their third straight championship on Wednesday night after recording their eighth shutout in nine matches. They continued the streak with a 2-0 win over rival Ashland at the Boyd County Athletic Complex.

“They are just veteran players,” Price said. “They have been around (each other) since they were freshmen playing together. I can’t say enough about my coaching staff, especially Reid Rowsey. He played at Boyd County and Kentucky Christian University. He played defense. I’ve got an offensive and defensive coordinator. That’s no lie. It’s very unorthodox.”

“Reid is my defensive coordinator,” he added. “He does a really good job relating to them and talking to them. It is good when they can sit there and say that this guy has lived it.”

Boyd County found offense from its usual suppliers. JB Terrill corralled a loose ball in the corner, transferred it to his left foot and curled in a blast towards the net. The strike found its mark over the outstretched hand of the Tomcats keeper and the Lions held a 1-0 advantage.

“Ashland had a player in that sweeper role,” Logan said. “We want to get that ball wide to draw him out. I actually yelled at JB that he was out. I think JB thought I meant the keeper. He looked right at the keeper and took a shot and it went in. It was a beautiful shot. For a guy to go left-footed going that direction, then take that shot, it was great.”

Ashland (6-5-1) bought its own brand of energy into the match and put up a strong defensive front to combat the speed of Boyd County. The Tomcats found some scoring opportunities during the contest and had two thwarted by the Lions keeper.

With less than 10 minutes remaining, Drew Clark redirected a ball in front of the net that was collected by Jack Samuel after the shot glanced off his gloves. Ben Acuff’s free kick a few ticks later met the same result.

Ashland coach Preston Freeman complemented his defense but the offense lost control in the middle and he said the team went away from what they wanted to do.

“Our defense held their own,” Freeman said. “Both of (Boyd County’s) shots, one was after a really nice finish and the other was with 10 seconds left the game while we are pushing everybody up. Our defense played well. They didn’t really have a whole lot of threats on our net. Matthew (Jimison) made a couple of really nice saves to keep us in the game.”

JB Walter put the icing on the championship cake with a rocket from 40 yards away. The shot soared over the keeper with six seconds remaining as Boyd County tried to salt the seconds off the clock. It was his team-leading 13th goal of the season.

“We always strive for perfection so I thought we could have played better,” Price said. “Give credit to Ashland because they first came out, and I told the boys, don’t be surprised by their energy. They brought it. We were on our heels a lot. The mindset got right in the second half as far as being prepared for the challenge at hand.”

Both teams advance to the 16th Region Tournament on Saturday. The Tomcats are assured of playing in the opening round and Freeman will expect more production from his team going forward.

“I told the guys after the game, I was proud of the effort, but it was unproductive,” Freeman said. “Our mentality has to be to win balls and play and attack guys. Sometimes we want to fall back too defensive and that is when it starts to hurt our team.”

Boyd County (8-0-1) will be the host of the region tournament. It will be a sizeable home field advantage as teams compete on the larger-than-normal playing surface.

“No pun intended, but that is big for us,” Price said. “It is surprising when you step out onto the field and see how large it is. It even gets the best of us. That is why we play so many guys. ... To be able to stay home and show up, I am so thankful that we get to have it.”

Ronald Leland Dickison of Ironton, Ohio passed away Saturday, September 11, 2021 at home surrounded by his family. Ronald was born November 11, 1942 in Ashland, Kentucky. He was the son of the late Ben Dickison and Dorothy Gillium. There will be a celebration of life, 1:00 P.M., Saturday, Se…