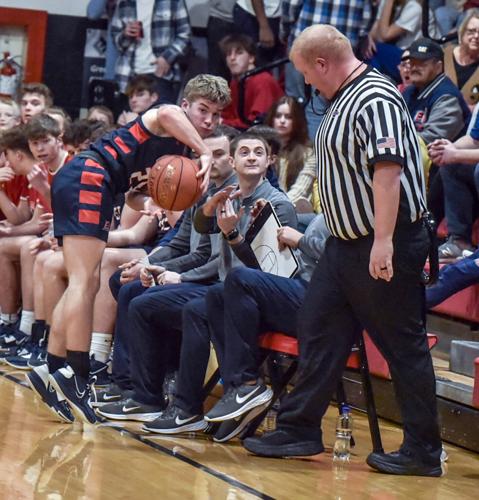 East Carter’s Tate Scott tiptoes the sideline after stealing a pass and throws the ball back into play before Coach Cole Brammer can call timeout to retain possession for the Raiders during Friday’s game at Fairview. 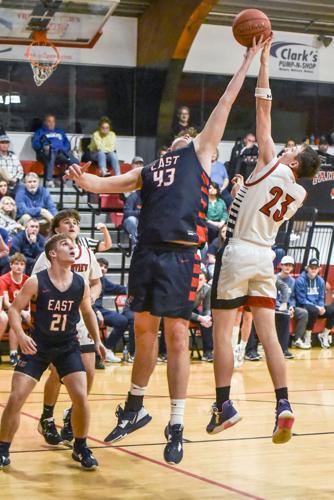 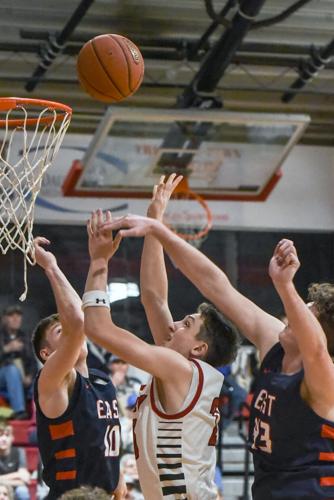 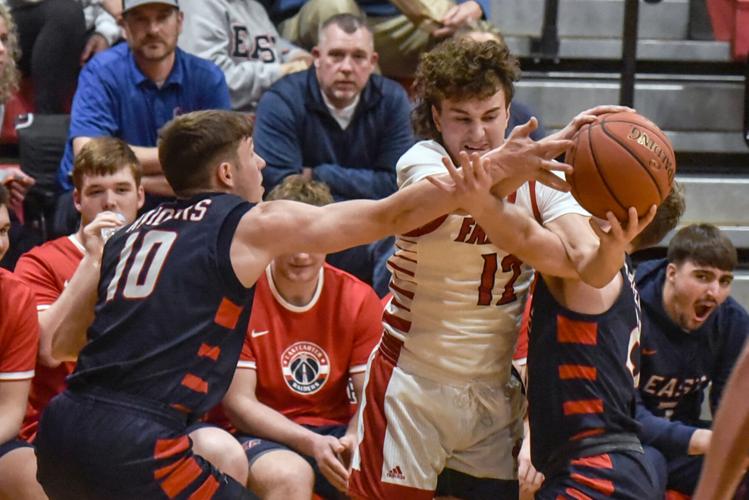 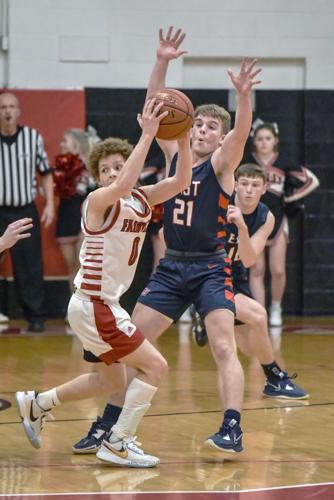 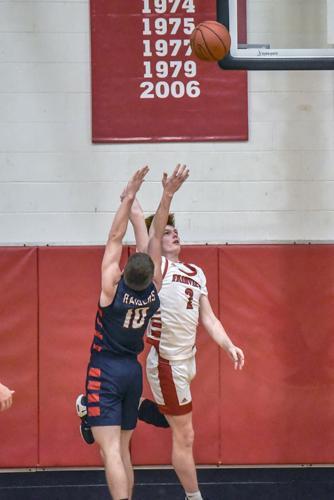 Fairview’s Izaac Johnson puts up a floater along the baseline while defended by East Carter’s Ty Scott during Friday’s game. 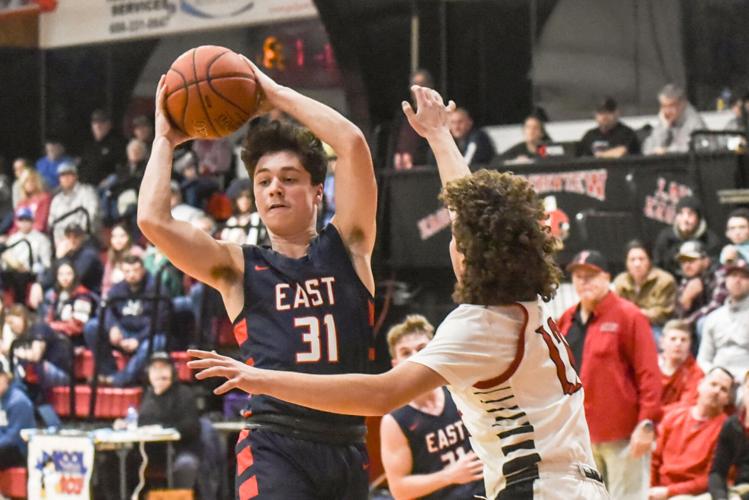 East Carter’s Gavin Sexton passes the ball to the wing around the defense of Fairview’s Tucker Adams during Friday’s game. 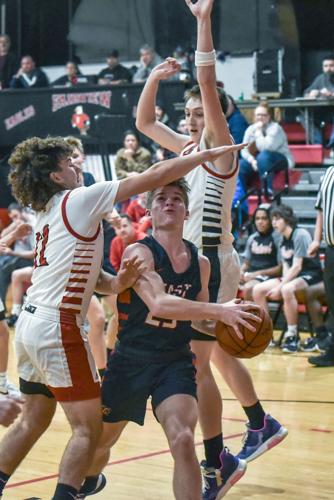 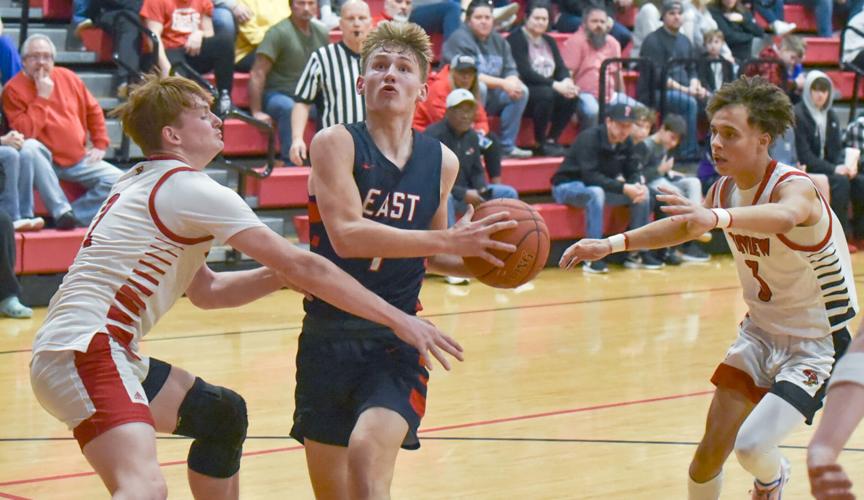 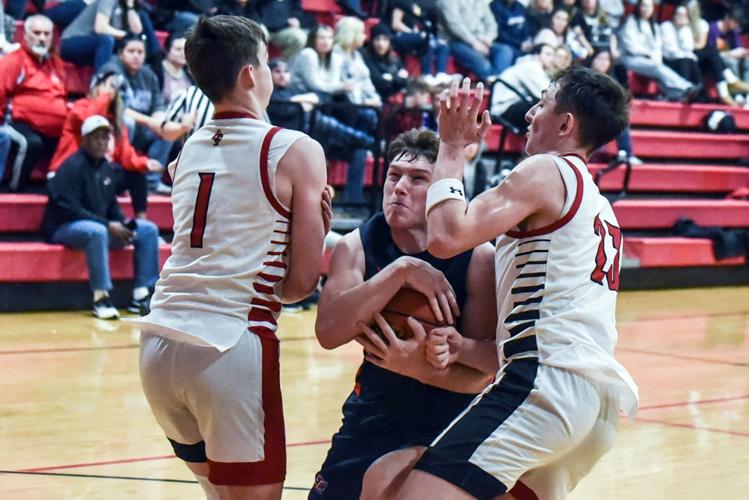 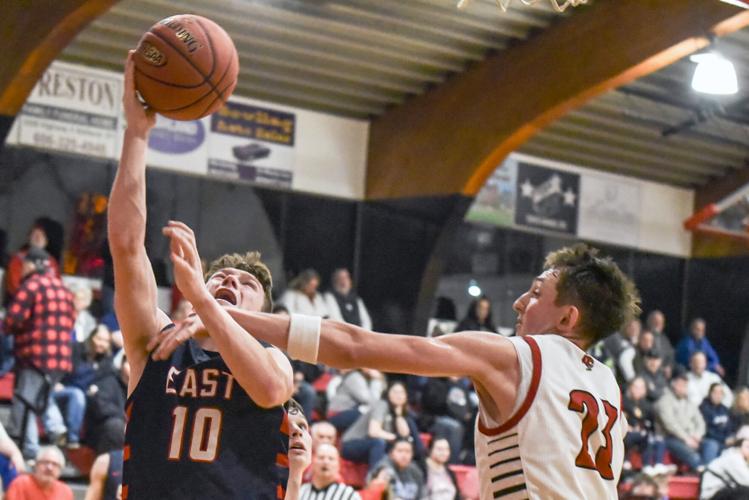 East Carter’s Blake Hall puts up a lay up while defended by Fairview’s Steven Day (23) during Friday’s game. 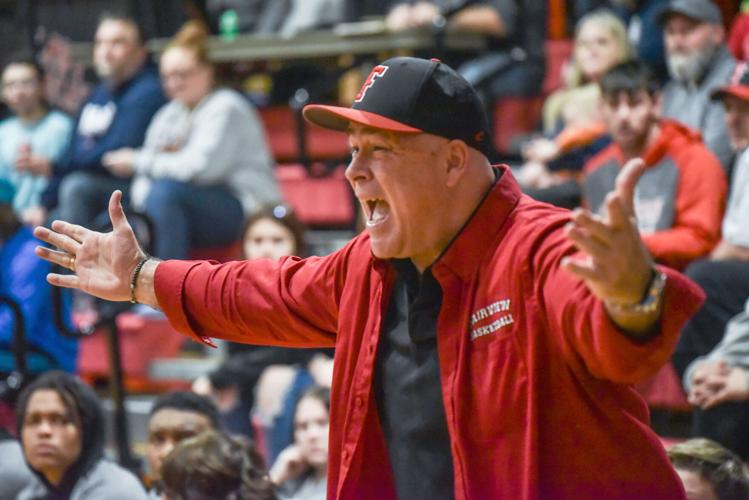 Fairview Coach Clarence Thompson reacts to a foul on the Eagles during Friday’s game against East Carter. 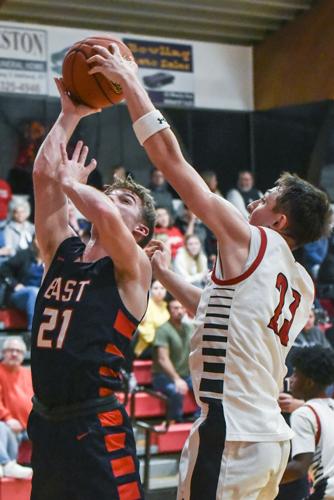 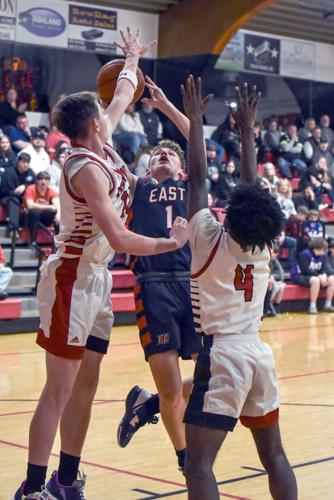 East Carter’s Evan Goodman finds space between Fairview’s Steven Day (23) and Keconte Spates-Olds to get up a layup during Friday’s game.

East Carter’s Tate Scott tiptoes the sideline after stealing a pass and throws the ball back into play before Coach Cole Brammer can call timeout to retain possession for the Raiders during Friday’s game at Fairview.

Fairview’s Izaac Johnson puts up a floater along the baseline while defended by East Carter’s Ty Scott during Friday’s game.

East Carter’s Gavin Sexton passes the ball to the wing around the defense of Fairview’s Tucker Adams during Friday’s game.

East Carter’s Blake Hall puts up a lay up while defended by Fairview’s Steven Day (23) during Friday’s game.

Fairview Coach Clarence Thompson reacts to a foul on the Eagles during Friday’s game against East Carter.

East Carter’s Evan Goodman finds space between Fairview’s Steven Day (23) and Keconte Spates-Olds to get up a layup during Friday’s game.

WESTWOOD East Carter aren't going to look a gift horse in the mouth.

The Raiders tried to take advantage of every trip to the free-throw line that the Eagles granted them, en route to an 85-64 win Friday night.

“I think our team was very disciplined tonight,” East Carter coach Cole Brammer said. “We had to handle some adversity, credit to Fairview who shoots the 3-ball as well as anyone in the region. They got hot at one point, but credit to our guys for staying the course. Offensively I liked that we were able to stay in what we were doing and still get baskets when times were hard.”

East Carter tallied 40 points from the charity stripe by the end of the night, out of a whopping 54 free throw attempts.

“When we’re not hitting our shots and not in transition, we’re a different team,” Fairview coach Clarence Thompson said. “But when your leading scoring isn’t producing or hitting his shots, it gets to him on the defensive end. That’s an issue. He’s a leader, so when you don’t have someone to fill his shoes coming off the bench, that creates a real issue, especially in the first half.”

The house was nearly full at the George W. Cooke Gymnasium, which gave the game a postseason atmosphere.

“They got a taste of what it’s like,” Thompson said of his squad in the home environment. “They’ve never had that taste. But their starting to see what it’s like. People came out, it was loud in here which is good. We came out on the short end tonight, but we have to overcome those obstacles, which is officiating, turnovers, missing shots. We as team have to learn how to do that and I think we’ll be able to do that. I want us to be that team down the stretch that no one wants to play come district time.”

East Carter jumped out to an early 7-2 lead, forcing the Eagles to play from behind throughout the frame.

Fairview entered the second quarter down 14-12. Four minutes later, it was a 34-15 deficit following a 20-3 Raiders run.

The Eagles offense would wake up a bit for the latter half of the second frame, but still found themselves down 37-32 by the time the buzzer sounded for the half.

East Carter put up an impressive 33 points in the second quarter, 14 of which came from the free throw line.

Fairview meanwhile only went to the line four times in the entire first half, making three, with its first attempt coming with just 29.6 seconds left in the second quarter.

“When they shoot 22 free throws in the first half and you shoot four, that’s a problem,” Thompson said. “Now, I’m not saying we didn’t foul at times, but there were other times where they fouled too. There’s three officials, but when two are blowing their whistles the majority of the time and the third one is blowing it on the other end at all times, that’s a problem.

That’s one of the issues," he added. "I don’t know what the problem was, but officiating, two of the three were good,… But you’ve got to play over that. It’s a difficult situation for us at home.”

At the break, East Carter junior Evan Goodman led in scoring with 18, eight of which came from his 8-0 run at the free throw line.

The Eagles were led by junior Bubba Day, who had 13 including three made 3-pointers. He was the only Eagle to that point with multiple made 3s and the only one without a miss from long range.

Fairview gained a bit of ground back in the third quarter, but still found itself down double-digits, 59-48, by the time the game entered the final frame.

The Eagles immediately cut the deficit to eight with a college-range 3 from eighth grader Mitchell Cox.

Unfortunately for Fairview, that was as close as things would get. The Eagles just couldn’t get enough stops or enough baskets to make up any ground.

“Second half I thought we played well, we fouled there towards the end, it was really a ten-point game before that, because I wanted to get the younger kids some experience towards next year,” Thompson said, "Because we just have one senior, so I wanted to give them a situation like that now to prepare them for when they’re in situations like this next year.”

Fairview tried to grasp at some straws as the quarter got late, sending the Raiders to the line even more than they already had.

“We spend a lot of time on free throws,” Brammer said. “We work relentlessly day in and day out, so for them to start putting us on the line with three minutes to go, we knew we’d have to make a bunch of them and fortunately we did that.”

Free throws, along with a couple of frustration-fueled technicals, helped East Carter extend its lead.

Goodman led the night with 32 points and went a perfect 18-18 from the free throw line.

“He played very well, I’m very proud of Evan,” Brammer said. “He stepped up to the occasion. Offensively, I thought he started putting the ball into the basket in the first half and just got into a rhythm. When he starts getting into a rhythm, he’s one of the better players in the region.”

Day had the high-water mark for Fairview with 23.

Fairview entered this game off a win Thursday night against Grace Christian where Day recorded his 1,000 career point with the Eagles.

“It felt pretty good,” Day said of his career milestone. “And I did it off a dunk, which was the first dunk of my career as well.”

Day said he knew when he went up for the dunk, he was crossing the 1,000 point mark.

“When Tanner [Johnson] threw it across the court, and I went up," Day said, "I was thinking in my head ‘This is my sixth point (of the night)’ so when slammed it, I was filled with excitement.”

When asked what his next goal would be, Day was thinking of team-goals first and foremost.

“I was very proud of him,” Thompson said. “I’m hoping he can get to the 1,500 mark come next year, which I think he will if he stays healthy. Bubba’s going to have a future in basketball if he wants it. He could average 30 points a game if he wants to, but he’s too passive right now. My goal is to get him stronger on the block. He can dribble, penetrate, and shoot the 3. We just need to get him tougher underneath to get him to create his own shot for a layup. Once we do that, everything will be great with him.”

“It’s a very good team,” Brammer said. “I’m good friends with coach Thompson up there, so I know they very well coached. At their place, it’ll be a battle and a very difficult environment to play in. Tonight was a difficult environment to play in too, but credit to our fans and our students. Our students, 30 or 40 of them, have been coming on the road with us every night. So, I want to make sure I give a shout out to them.”

Fairview (10-9) looks to rebound Tuesday when it hosts Ashland. The Eagles haven’t defeated the Tomcats since 2017.

“I know it was back in the day when I played, when we beat Ashland here in the Cantrell era, you couldn’t get a seat in here,” Thompson said. “I’m hoping it’s similar to that. I’m hoping it’s a full gym to hopefully give us the edge a little bit. We need every edge we can get against Ashland. They are a really good team.”