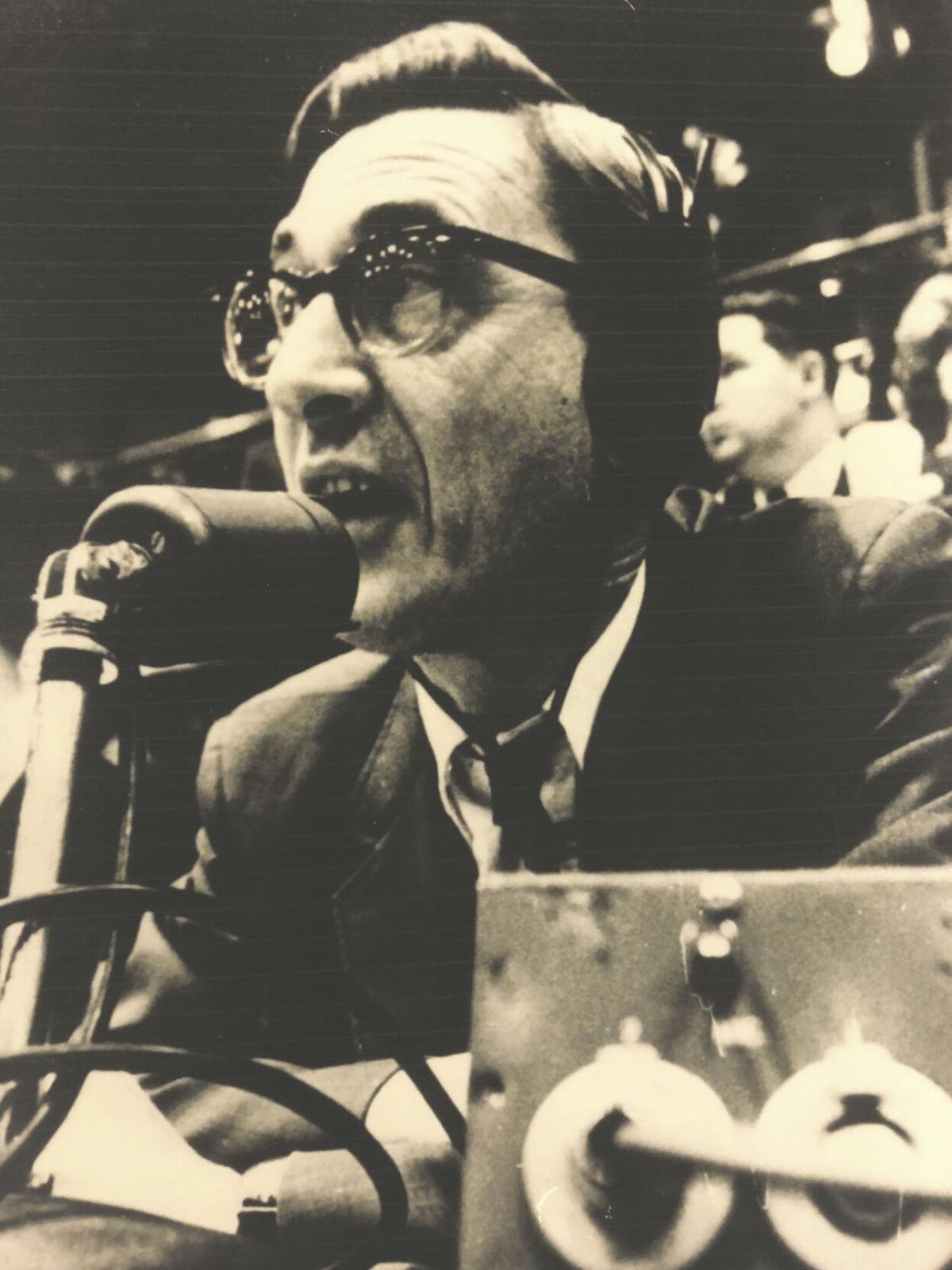 Gene Morehouse calls a game at Veterans Memorial Fieldhouse in Huntington in 1969. Morehouse’s son, Keith, followed in his father’s footsteps, covering Marshall sports for many years. 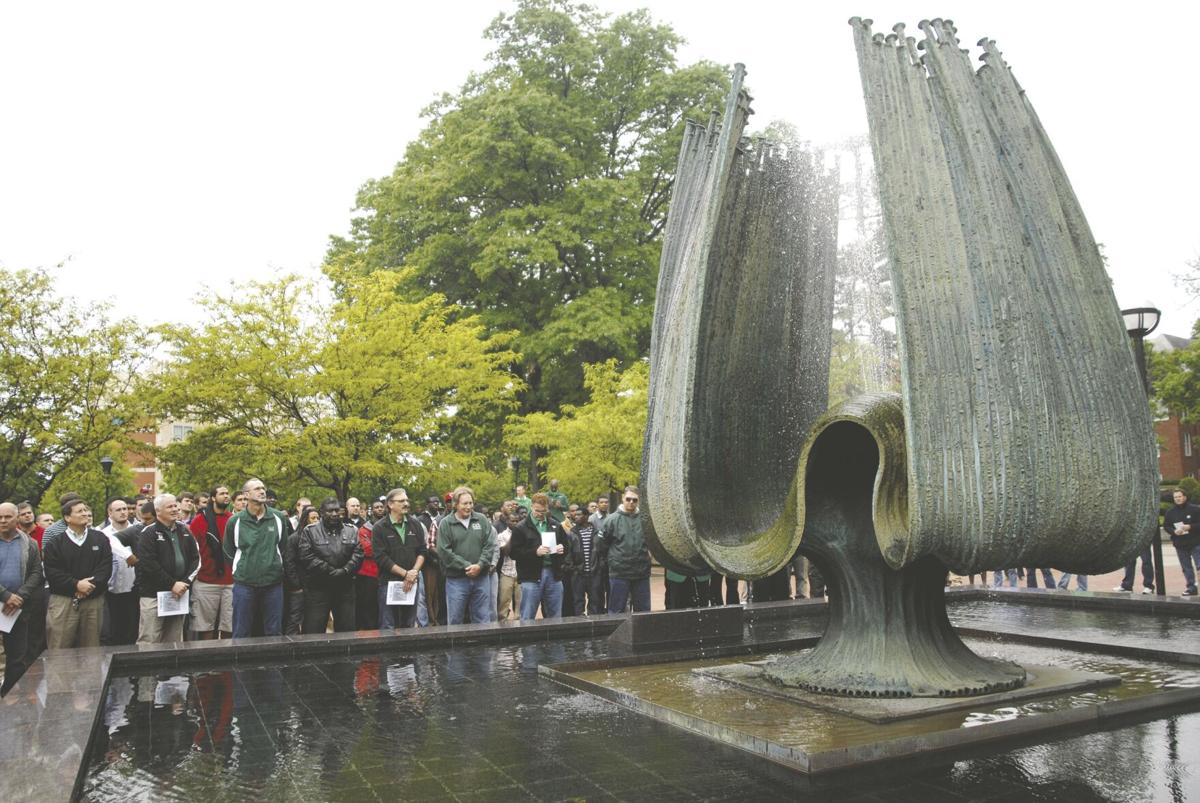 Gene Morehouse calls a game at Veterans Memorial Fieldhouse in Huntington in 1969. Morehouse’s son, Keith, followed in his father’s footsteps, covering Marshall sports for many years.

HUNTINGTON On Saturday, Nov. 14, 1970, 9-year-old Keith Morehouse was watching television when he heard the terrible news.

The plane carrying Marshall University’s football team, as well as administrators and fans, had crashed at 7:36 p.m. near Tri-State Airport. The team was returning from Kinston, North Carolina, after its game that day against East Carolina. Soon, the biggest national media outlets were in Huntington to cover the huge story.

Morehouse’s father, Gene Morehouse, was aboard that plane.

“My twin sister and me and my mom (Genevieve Morehouse) were in a house and we saw a bulletin go across the screen of the TV,” Keith Morehouse said. “Mom got on the phone and started calling people and it was pretty much bedlam after that.

“I don’t know exactly, but I think (the bulletin) was something to the effect of, ‘plane has crashed at Tri-State, thought to be carrying the Marshall football team.’ They wouldn’t know about survivors or anything at all, how many were hurt, or even how many were on the plane at that point. I think the reaction was that we knew something was wrong. We didn’t know exactly what, but we knew something was wrong.”

All 75 people on the plane died in what is still the worst sports-related air tragedy in American history.

The sports world was still reeling from the plane crash on Oct. 2, 1970 near Silver Plume, Colorado, that killed 31 people, including 15 members of Wichita State University’s football team. Nine people survived that crash.

The Martin 4-0-4 was one of two aircraft carrying the team to Logan, Utah to play Utah State.

Gene Morehouse was the sports information director at Marshall but was best known to the public as the radio voice of Thundering Herd sports. He assumed both positions in 1968 after working for radio stations WWNR and WJLS in Beckley, West Virginia.  “He called a lot of Beckley games, football and basketball,” said Morehouse, who followed his father’s footsteps into sports journalism.

Since 1991 he has been a local TV sports anchor and is now sports director at WSAZ.

Gene Morehouse had a WSAZ connection, announcing Marshall football games on WSAZ 930 AM beginning in 1968. The radio station was under new ownership and went by WGNT by football season in 1970.

“He knew the entire coaching staff. I mean, when you do that job, he was close with the players because he’s basically writing their bios, taking care of interview requests, all the things that a sports information director does,” Morehouse said of his father, adding that Gene Morehouse probably knew most of the people on the plane.

More than half of the passengers on Southern Airways Flight 932 weren’t football players, and many of them were parents. Morehouse said he met some children of the plane crash victims before the crash, and some after the crash.

“I went to school with Sharon Ward; her father was killed in the tragedy,” Morehouse said. “I knew a lot of the kids. I went to school with the Arnolds, they had the daughter that was my age, and then of course the Hagleys.”  There is one very special person that in a twist of fate, Morehouse would meet several years later.

“We didn’t meet ‘til out of high school.  She went to Huntington East. I had gone to Huntington High. We met on a senior trip down in Myrtle Beach,” Morehouse said of his wife, Debbie Hagley Morehouse. Her parents, Dr. Lee Hagley and Shirley Hagley, perished in the crash.

Gene Morehouse was an only child from New Jersey that became a tremendous play-by-play announcer.  “Just a real gregarious, happy, friendly guy, loved sports, loved his family, loved his job, just a real gentle soul,” Morehouse said of his father. “I don’t remember him playing like a lot of golf, or sports, or anything. He really kind of immersed himself in his work. I remember though he used to make us little games, like baseball games, and he used a deck of cards so to figure out whether you got a hit. He really put a lot of work into these football and baseball games, so basically just for us to play with cards, and it was really creative.  So he did a lot of that.

“You know, with his job he was busy and involved in community activities as well. He was on the Chamber of Commerce, or maybe the Chamber of Commerce director in Beckley when we were there. He was just a typical dad that got involved in a lot of things.” Gene and Genevieve Morehouse had six children. “My twin sister and I are the youngest,” Morehouse said.  Genevieve Morehouse died in 1989. Morehouse said that his father announced his last game by himself, but that a graduate assistant sports information staffer died in the crash also.

“I think I remember in junior high, they had one of those career fairs. I thought  (broadcasting) might be a neat thing to go into,” Keith Morehouse said. “I went to Marshall and studied broadcast journalism. Didn’t know where it would take me, but just went up through the steps that you go. Then in 1996 I got a call for a TV play-by-play job for Marshall football and basketball. That was right then with Marshall in its heyday with Chad Pennington and Randy Moss. So I did their TV games for eight years.

Morehouse was portrayed in 2006’s “We Are Marshall” as a young kid. At the end of the movie, he made a cameo appearance in the press box.  Morehouse said that was to leave the impression of him announcing the game.

“The tone of the movie and the story they told were pretty spot-on,” Morehouse said.

WSAZ aired “A Change of Seasons: Fifty Novembers Ago” on Thursday.  A good bit of audio of Gene Morehouse calling the East Carolina game over the game video was included. Morehouse is the host of the special that will be rebroadcast tonight from 7-8:30 pm on WQCW.