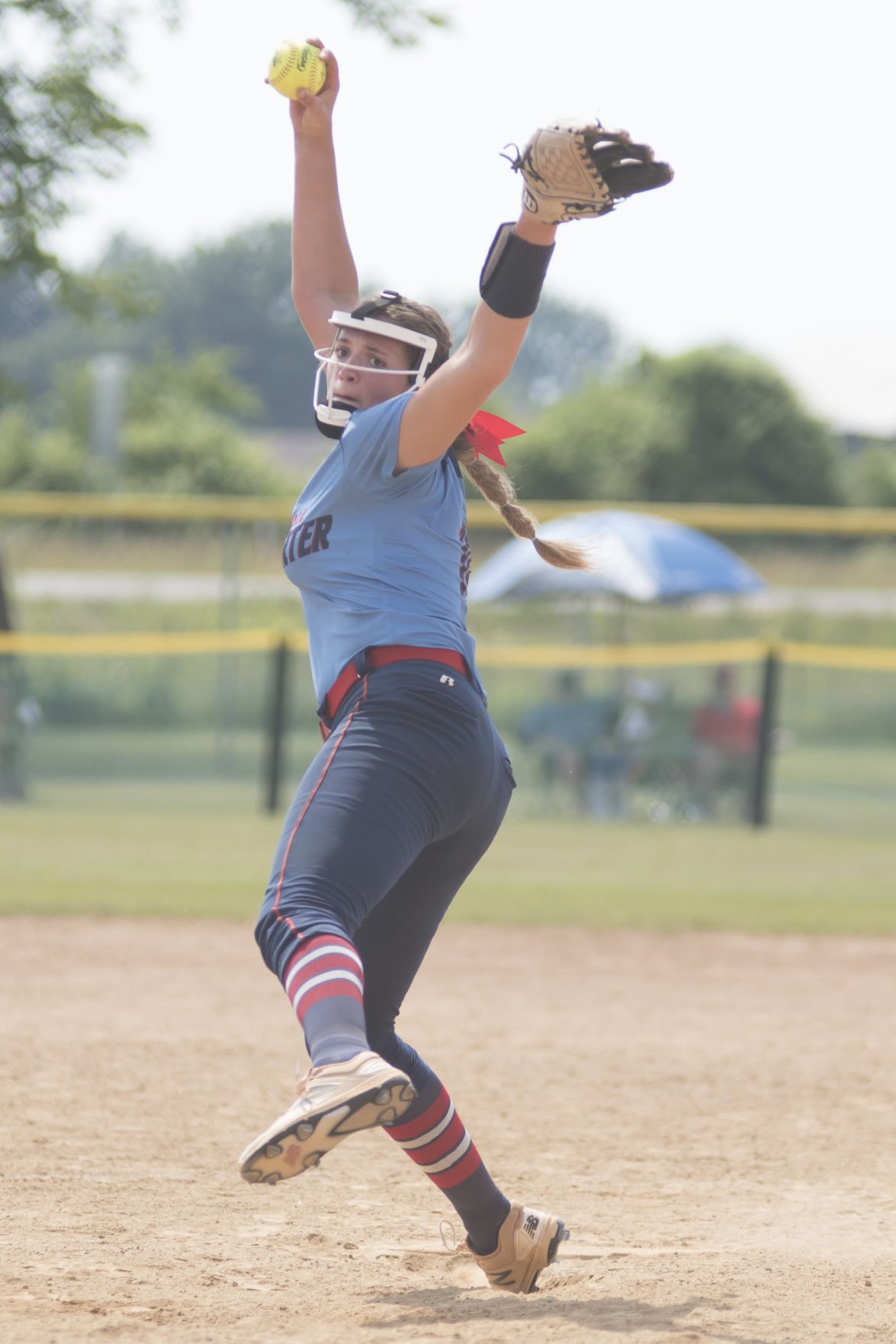 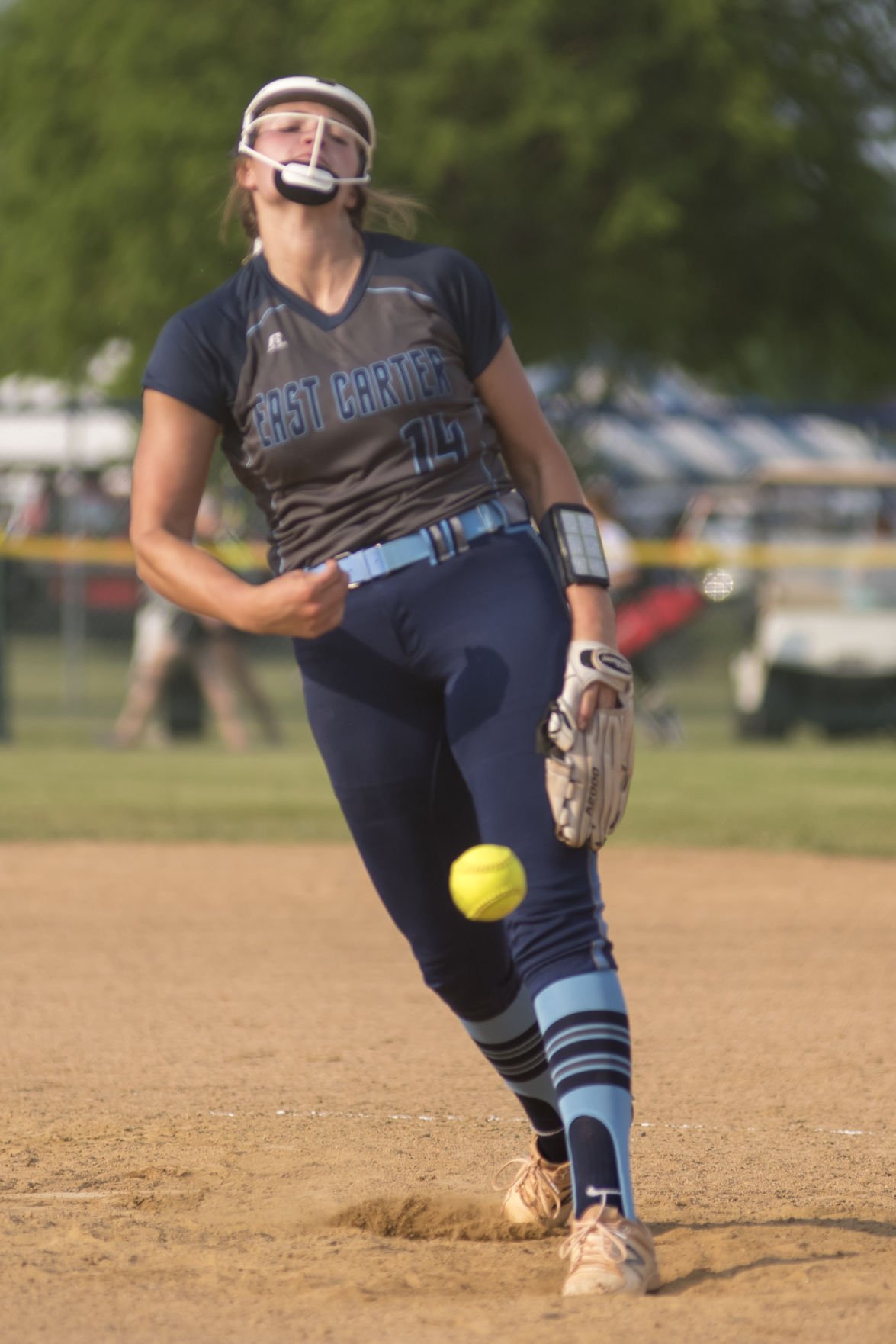 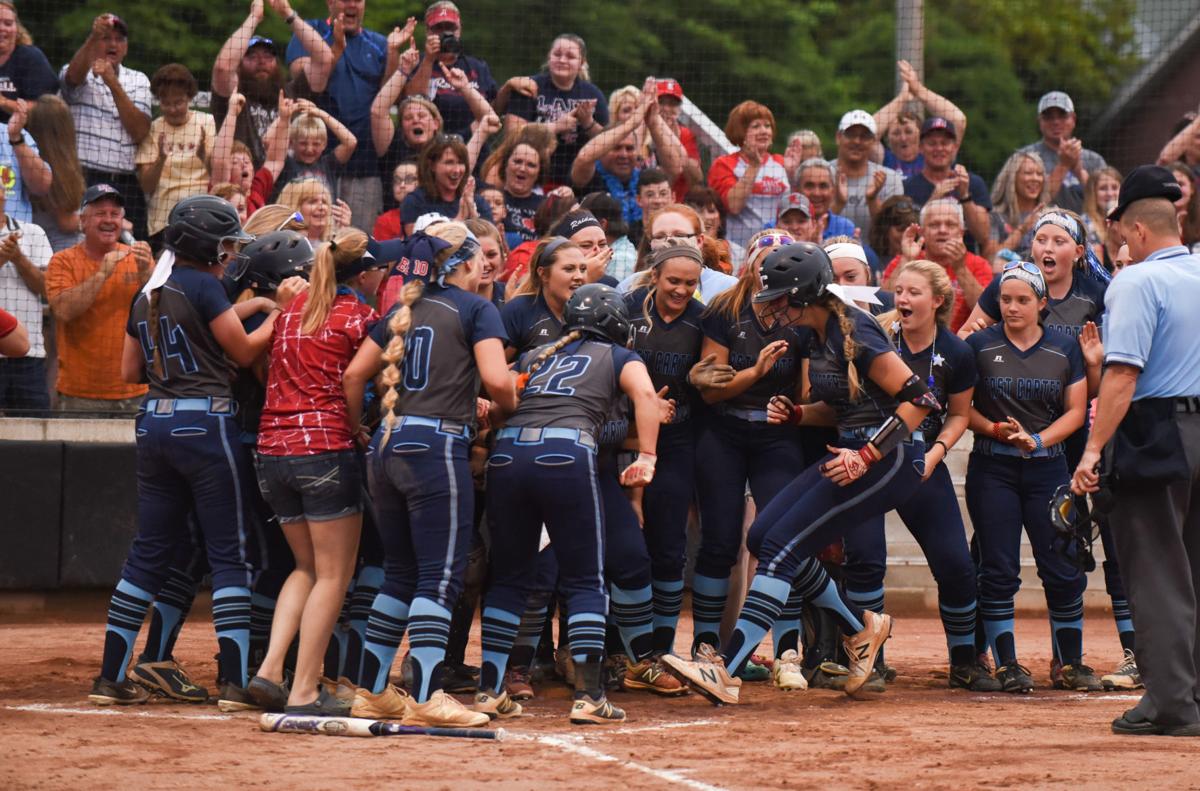 East Carter's Montana Fouts crosses the plate after hitting a grand slam on Friday against Boyd County. MARTY CONLEY/ FOR THE DAILY INDEPENDENT 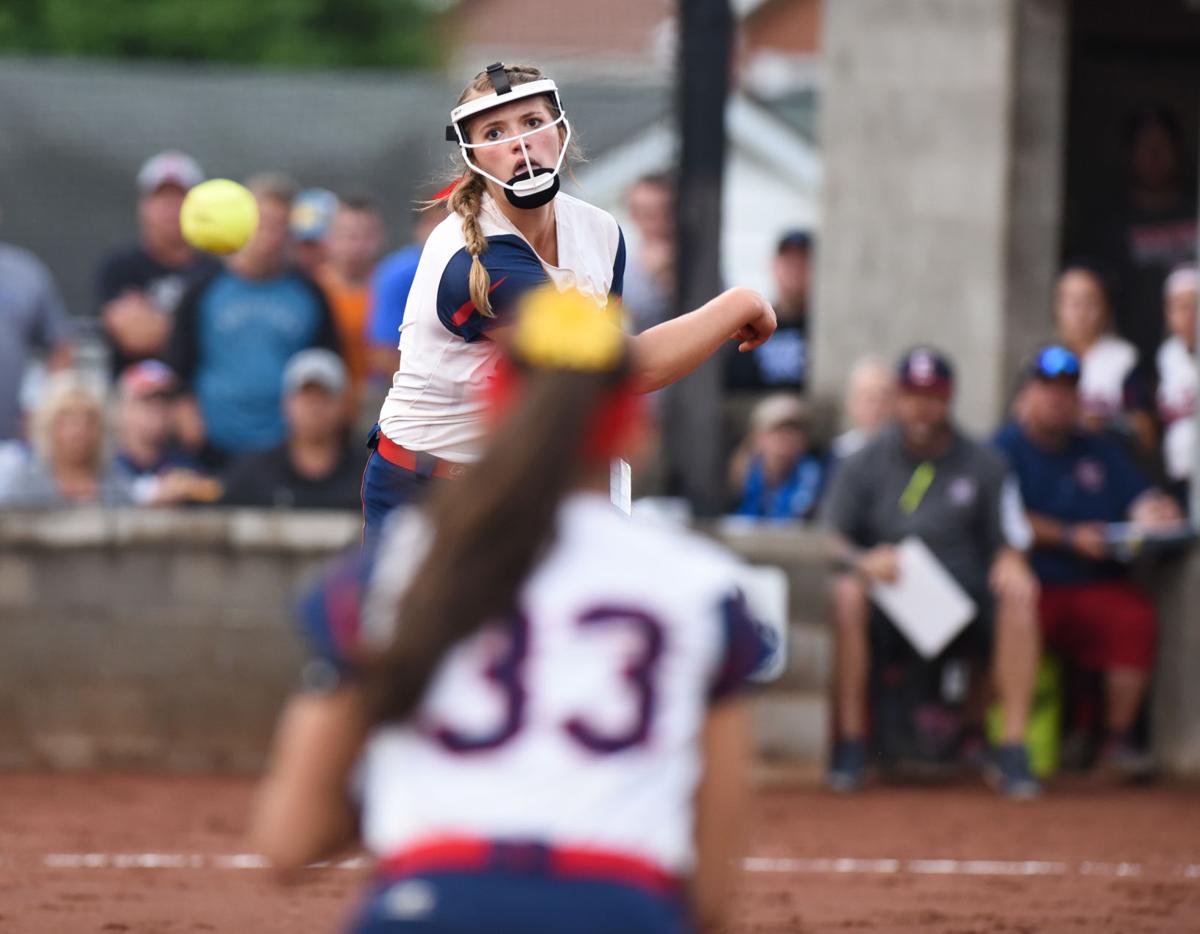 East Carter's Montana Fouts throws to Eden Mayo for the out on Thursday against Raceland. MARTY CONLEY/ FOR THE DAILY INDEPENDENT

East Carter's Montana Fouts crosses the plate after hitting a grand slam on Friday against Boyd County. MARTY CONLEY/ FOR THE DAILY INDEPENDENT

East Carter's Montana Fouts throws to Eden Mayo for the out on Thursday against Raceland. MARTY CONLEY/ FOR THE DAILY INDEPENDENT

In her preparations for the Kentucky Softball Coaches Association East-West All-Star Games, Montana Fouts had forgotten to pack an East Carter batting helmet. Fouts is superstitious about wearing a specific helmet, she said, and Boyd County’s Ashton Rankin happened to have one Fouts could use.

And besides that, the East All-Stars wore red uniforms last Saturday, so when East Carter’s Miss Softball stepped to the plate at Eastern Kentucky University, she donned a matching Lady Lions lid.

Fouts proceeded to hit a home run wearing the gear of one of the Lady Raiders’ neighboring rivals.

“That would’ve been really good, if she’d been wearing the red and gray,” cracked Wheeler, Boyd County’s coach.

Fouts will incorporate a different shade of red — crimson — into her on-field wardrobe next year, moving on to the University of Alabama. And while her softball accomplishments, culminating in national Player of the Year recognition from USA Today and MaxPreps, are prodigious, it’s not just Fouts’ bedeviling rise ball and her thunderous bat that have her headed for Tuscaloosa.

“Not only is she an incredible softball athlete, but she’s just a great young lady off the field, and I think that really hit home with us,” Crimson Tide coach Patrick Murphy said. “We try to vet everybody, and it came back as the same opinion over and over and over: she’s a great teammate.

“(That’s important) especially being a pitcher, because you want the people behind you playing really, really hard for you, and if you’re a pitching princess, that doesn’t happen, and I just don’t think that’s her. She’s got a really, really good head on her shoulders, and we can’t wait to get her in crimson and white.”

Fouts’ softball prowess, demeanor, community work, academics and role in helping coach Derek Calhoun build the East Carter softball program from a 16th Region also-ran to a state Final Four team all contributed to her being named the 2017-18 Tony Curnutte Memorial Female Sportsman of the Year.

“She gets a lot of publicity as a softball player, but she’s so much more than that,” Calhoun said. “She works a lot with a lot of charities in the community; she’s academic softball All-State; her and the seniors conducted different camps for the youth throughout their years here. Just an outstanding kid all the way around.”

Fouts moved from Charleston, West Virginia, to Grayson in her fifth-grade year with her mother, Stephanie Williams, who had remarried shortly before, she said. As the new kid in town, it didn’t take Fouts long to make friends — or for her future teammates to embrace her.

“It was at the end of Little League season,” Fouts recalled. “I went to a Little League tournament with the girls I play with now, Eden (Mayo), Gracie Robinson, Madison (Sparks). They were all on that team, and we went to Louisville together, and that weekend, it just seemed like we all became best friends. It didn’t take very long.”

Fouts and a tight Class of 2018 thus set their sights early on continuing East Carter’s ascent. It was apparent early, Calhoun said, that Fouts was the caliber of player the Lady Raiders could build their glass ceiling-shattering efforts around.

Problem was, East Carter already had a pitcher, and a good one. Morgan Jacobs was an already-accomplished freshman when Fouts began suiting up for varsity games as a sixth-grader.

So Calhoun, in his first year as head coach, had to navigate the potential mess of finding reps for everyone.

Except it wasn’t a problem: Fouts and Jacobs made it work, even when the younger player began to get the ball more often. By the time Jacobs was a senior and Fouts was a freshman, the ninth-grader made 21 starts in the circle and the 12th-grader got 12.

“Morgan was kinda our staple in our program before Montana got here for a few years, as a middle-schooler and then coming on up,” Calhoun said. “I think Morgan saw that Montana was gonna be something special. ... They both handled it with extreme class.”

“She’s always been awesome,” Fouts said of Jacobs. “She came to some of our games this year. We’ve always been friends, so there was nothing bad there. She just helped me get used to it, especially in middle school.

“All the girls were pretty great to those of us that were playing up. It was fun. It was just, whatever it took to win.”

“One thing I really enjoyed about having that senior group is, they were leaders,” Calhoun said. “If something was going on off the field, the young girls were involved. If we were doing drills, the older girls would be talking to the younger girls, letting them know what they were doing wrong.

“Now we’ve got these younger girls that’s gonna have to step up into these big roles, and with that leadership that we had out of that group, it’s really gonna translate, I think, over for us to have another good ball team next year.”

East Carter had never won a region tournament championship when Fouts joined the program and had only once even qualified for the region finals, in 1994, the last year of KHSAA-sponsored slow-pitch softball.

Fast-forward to June 1, when the Lady Raiders won the 16th Region Tournament title for the third consecutive season, and to June 9, when East Carter got to the state tournament’s final four for the first time.

“They’ve done an outstanding job as far as just believing in the system that we’ve put in,” Calhoun said. “We knew that this program could be bigger than what it was, and they were kinda like the building blocks for that.”

In addition to strengthening their own team, Fouts and company elevated the play of softball throughout the 16th Region, Wheeler said. Fouts combined with Ashland alumna Megan Hensley, the 2014-15 Female Sportsman of the Year, to win the last five Gatorade Kentucky Player of the Year awards and two of the last four Miss Softballs.

“They represented our region fabulously,” Wheeler said of the Lady Raiders. “You couldn’t ask for any more than what the kids did at East Carter this past year. They were real successful, and I think having her in our region has made other teams successful, made the programs a lot stronger, because you try to go out and find teams that have good pitching to play (against).”

Calhoun also credited Fouts’ father and a Lady Raiders assistant coach, Tim Fouts, with helping grow the program — in particular, translating the baseball background that Calhoun and assistants Mike Sammons and Rob Castle had into softball.

East Carter’s newfound success has trickled down to grassroots growth in Grayson, as well as the surrounding area.

“A lot of girls see Montana, and they want to be like her,” Calhoun said. “Everywhere we go, we’ve got girls wanting to get pictures with her and talk to her. She works with kids on pitching lessons. Not only for East Carter, but I think she’s been a big influence to the whole area.”

Fouts recognizes that influence and embraces it.

“That’s one of the best things about playing softball, for me anyway, is just thinking, what can you do to help a younger girl?” Fouts said. “We remember when we were younger, there were like two or three (Little League) teams, if that, and now you go and they’re playing all day. It’s just awesome to go and watch.”

A Tim Fouts tenet made an impression on his daughter at a young age.

“When you go to camps and you talk to college coaches, they tell you that one of the things they look at is how you carry yourself on and off the field, and how you do whenever things don’t go your way,” Montana said, “so I’ve thought about that ever since I was younger, trying to be recruited. My dad’s always taught me growing up playing softball that you gotta act like somebody’s watching all the time, even when you’re by yourself or talking to one of your friends.”

It took root. Wheeler hadn’t really interacted with Fouts outside of competition until the All-Area photo shoot in June. He was impressed by that conversation, though.

“She’s a very humble kid,” Wheeler said. “She doesn’t have a chip on her shoulder. She doesn’t see herself any different than any other kid. And she could be, because she is very gifted, but she fits in with kids.”

“She’s total class,” he said. “She does everything like an athlete should. She doesn’t turn anybody away, if they’ve got questions or they just want to take pictures.”

Fouts’ community work includes raising money for the Wounded Warriors Project. A couple of years ago, she garnered donations from businesses by the strikeout, which could’ve gotten out of hand in a hurry, considering she’s averaged 469.3 strikeouts a season the last three years. That changed into just collecting donations at the concession stand, Fouts said.

Building toward a title?

Taylor Wheeler and Hieneman were both elite softball athletes in the area. Dave Wheeler called Fouts “a different level of player.”

“It’s once in a lifetime. I don’t think our region will ever see anybody like that again,” Wheeler said, before comparing Fouts to perhaps her closest male equivalent in northeastern Kentucky sporting history. “They’re still waiting for the next Don Gullett to show up, and that’s not gonna happen.”

That’s best expressed by her new coach’s expectations. Alabama has finished the season ranked in the top 15 every year since 2003, and Murphy expects Fouts to aid in that effort immediately.

“Oh, she will definitely pitch. I’ve told her that I wanted her to hit, too,” Murphy said. “We see her contributing right away.

“With that being said, every freshman pitcher we’ve had struggled a little bit, because you’re dealing with (opposing) lineups that people are good 1-9, and it’s a little bit different game and it’s a lot faster. There’ll be an adjustment period, but we can’t wait to get her down here.”

Fouts is ready for the challenge, and wants to take it as far as possible.

“I’m just gonna have to go in and work even harder than I have,” she said. “They also have a great pitching staff and a great pitching instructor (Stephanie VanBrakle Prothro), so I’m really excited to work with her too.

“But you can always get better, so ... (we’re looking for a) national championship.”

PAST TONY CURNUTTE MEMORIAL SPORTSMEN OF THE YEAR