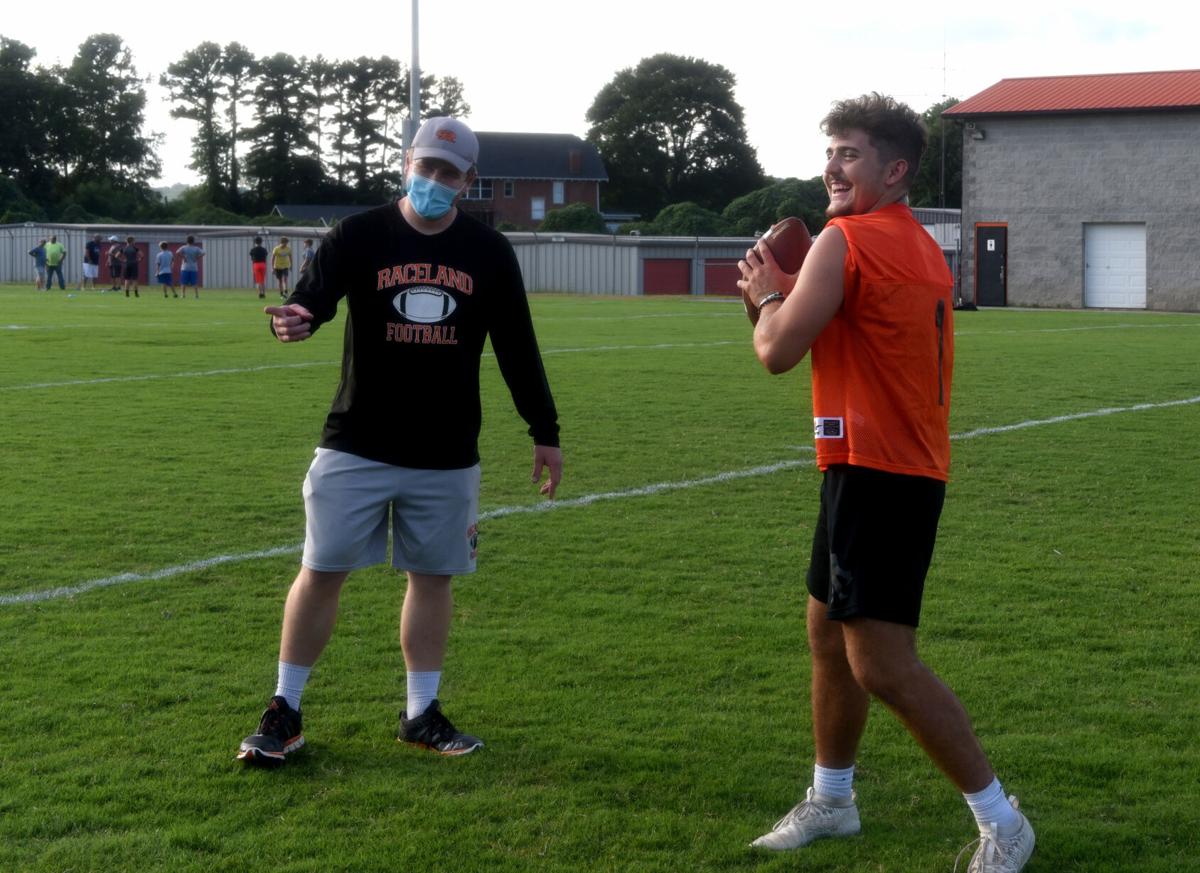 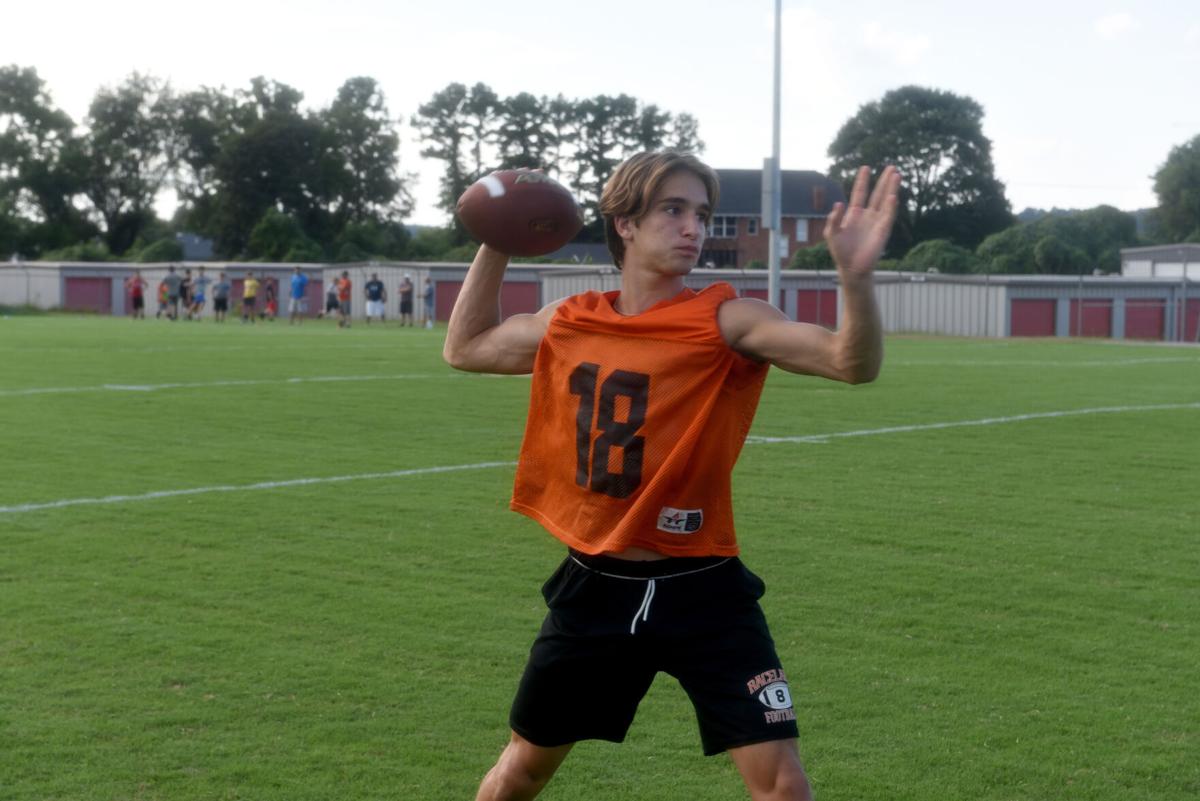 Junior Conner Hughes gets in a few tosses in before he starts his workout. 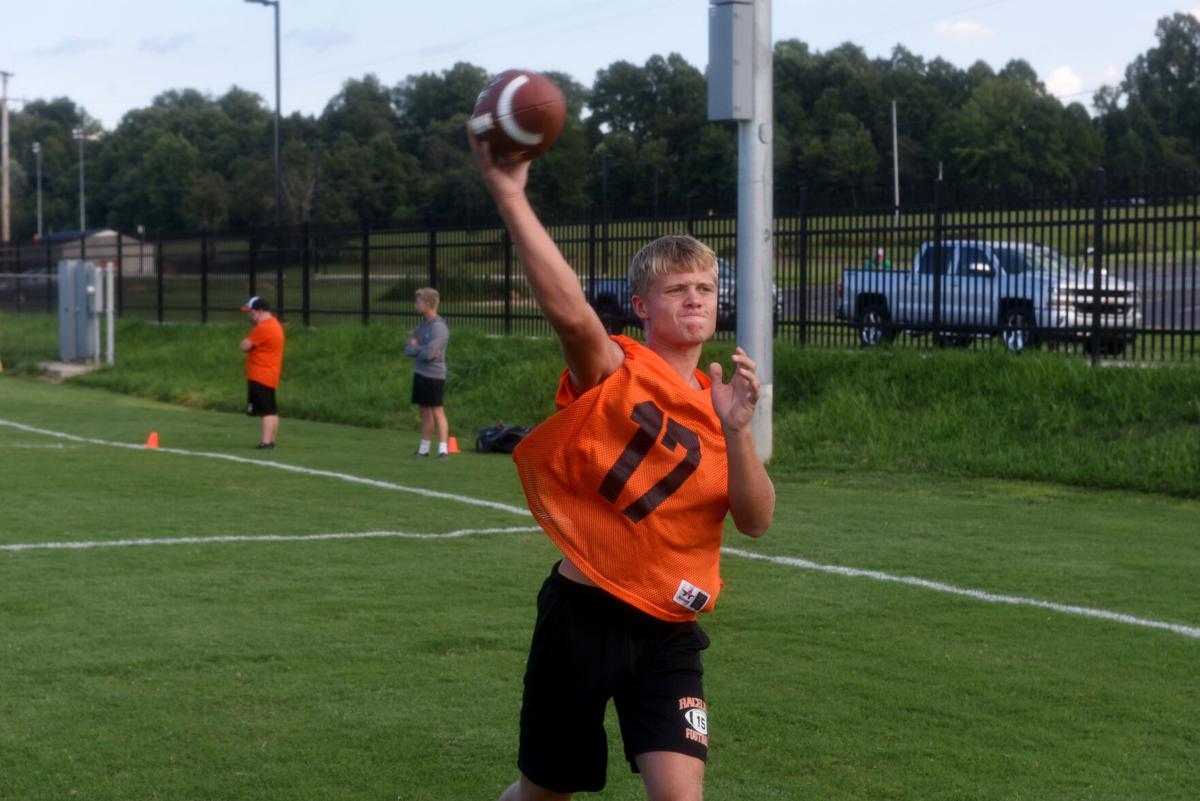 Freshman Parker Fannin gets in a few warm-up throws before a workout last month. 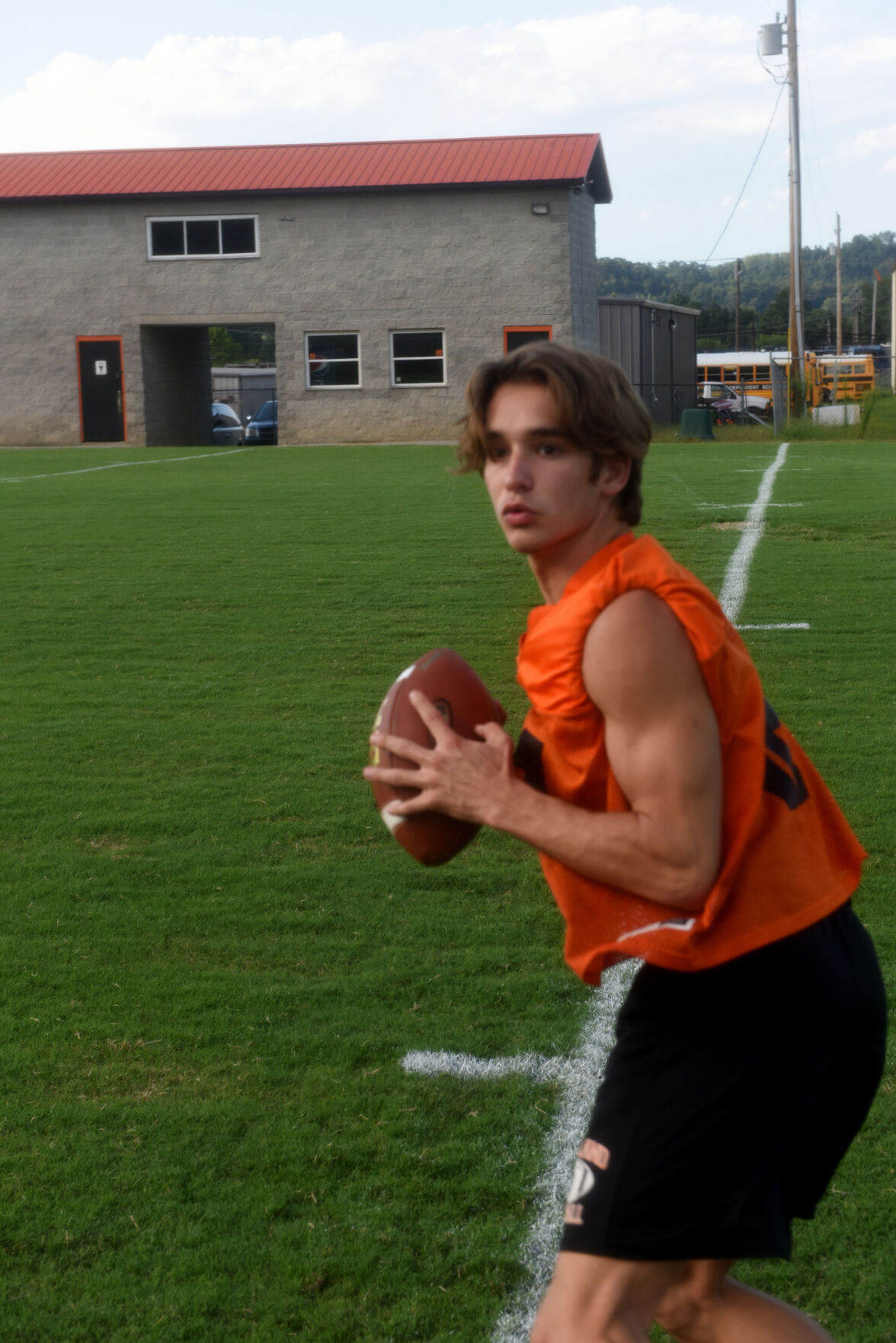 Junior Conner Hughes works on his footwork before a workout last month. 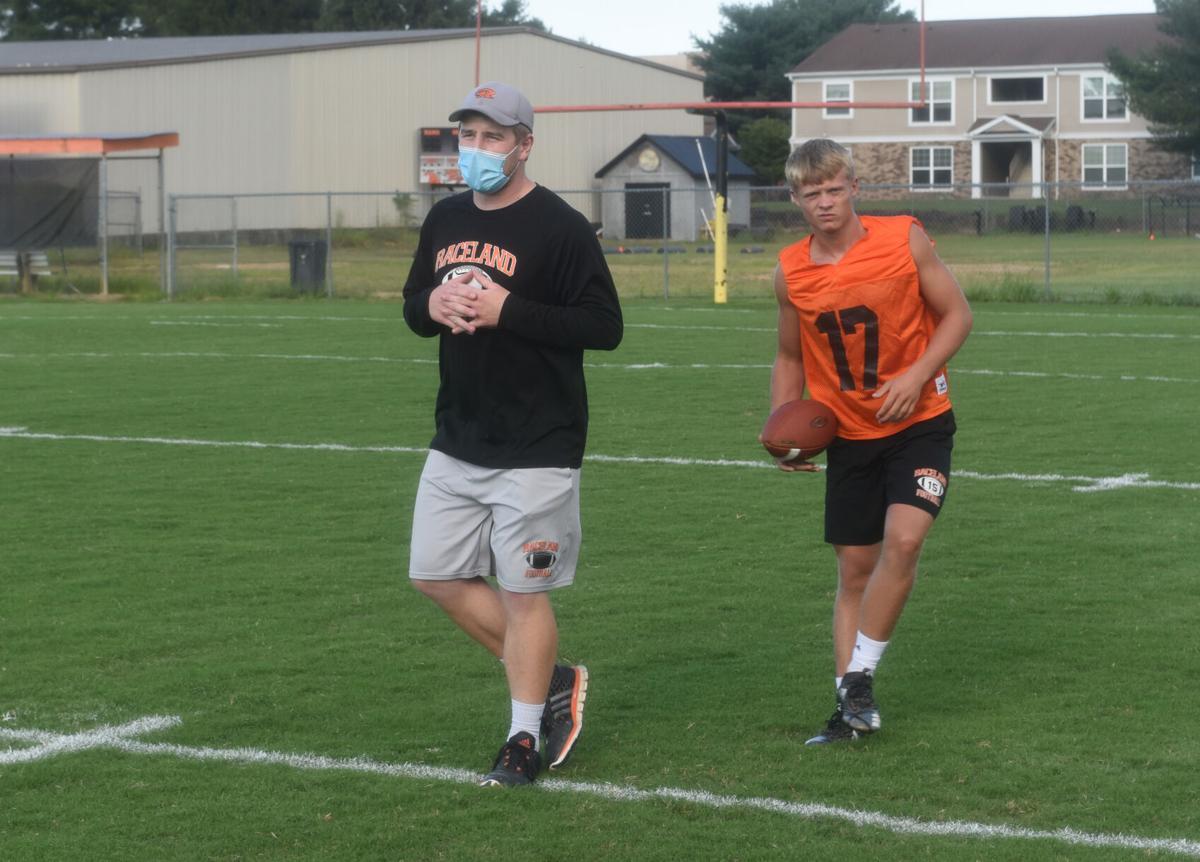 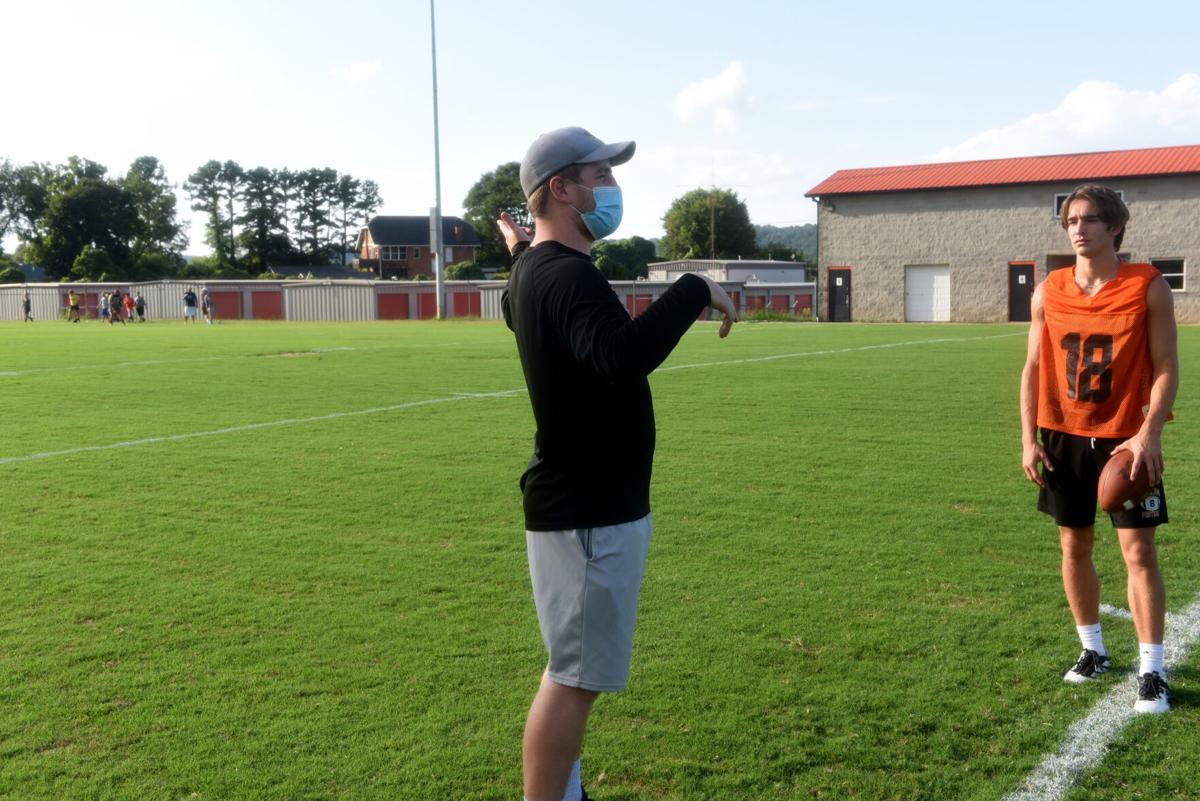 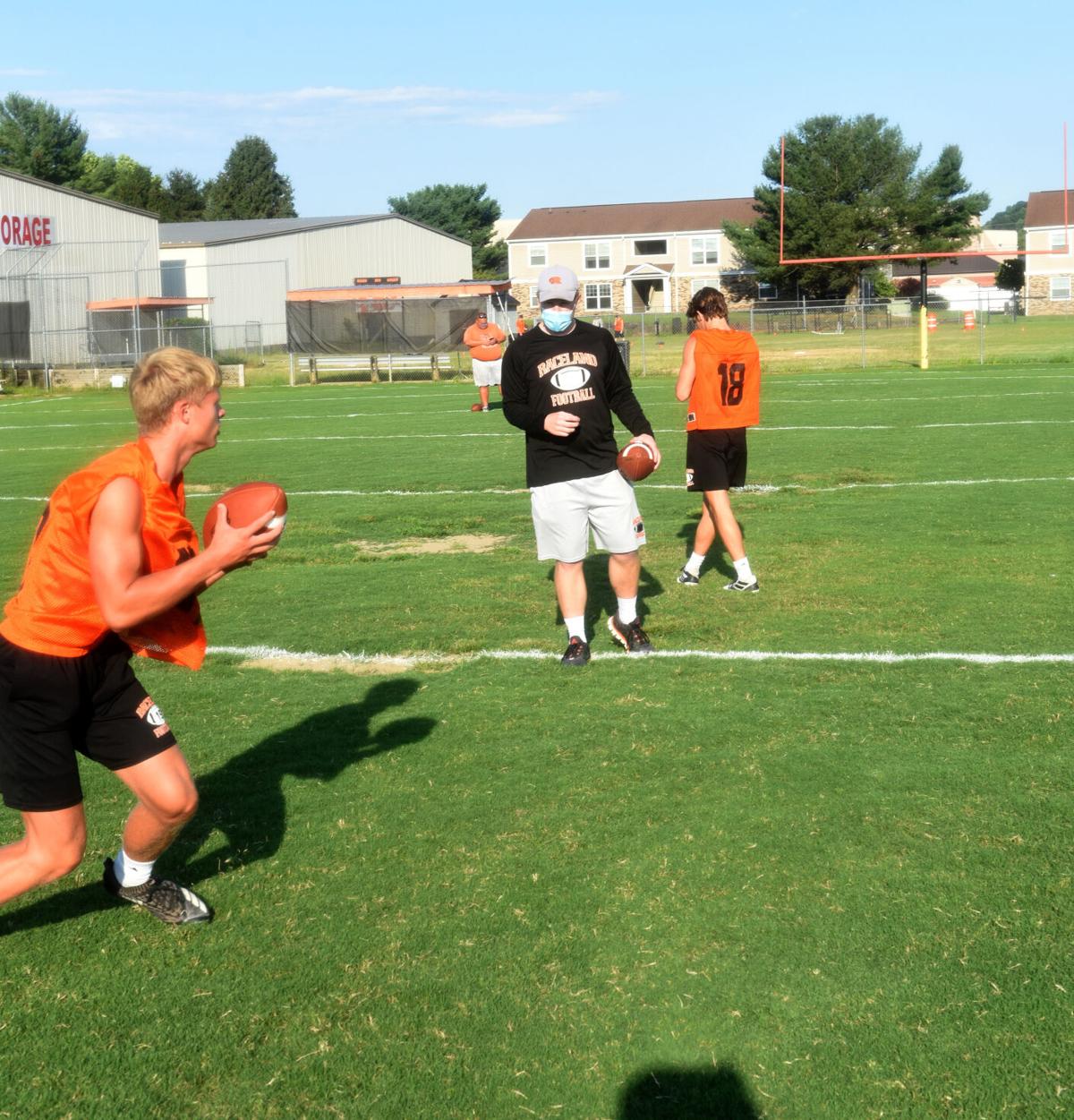 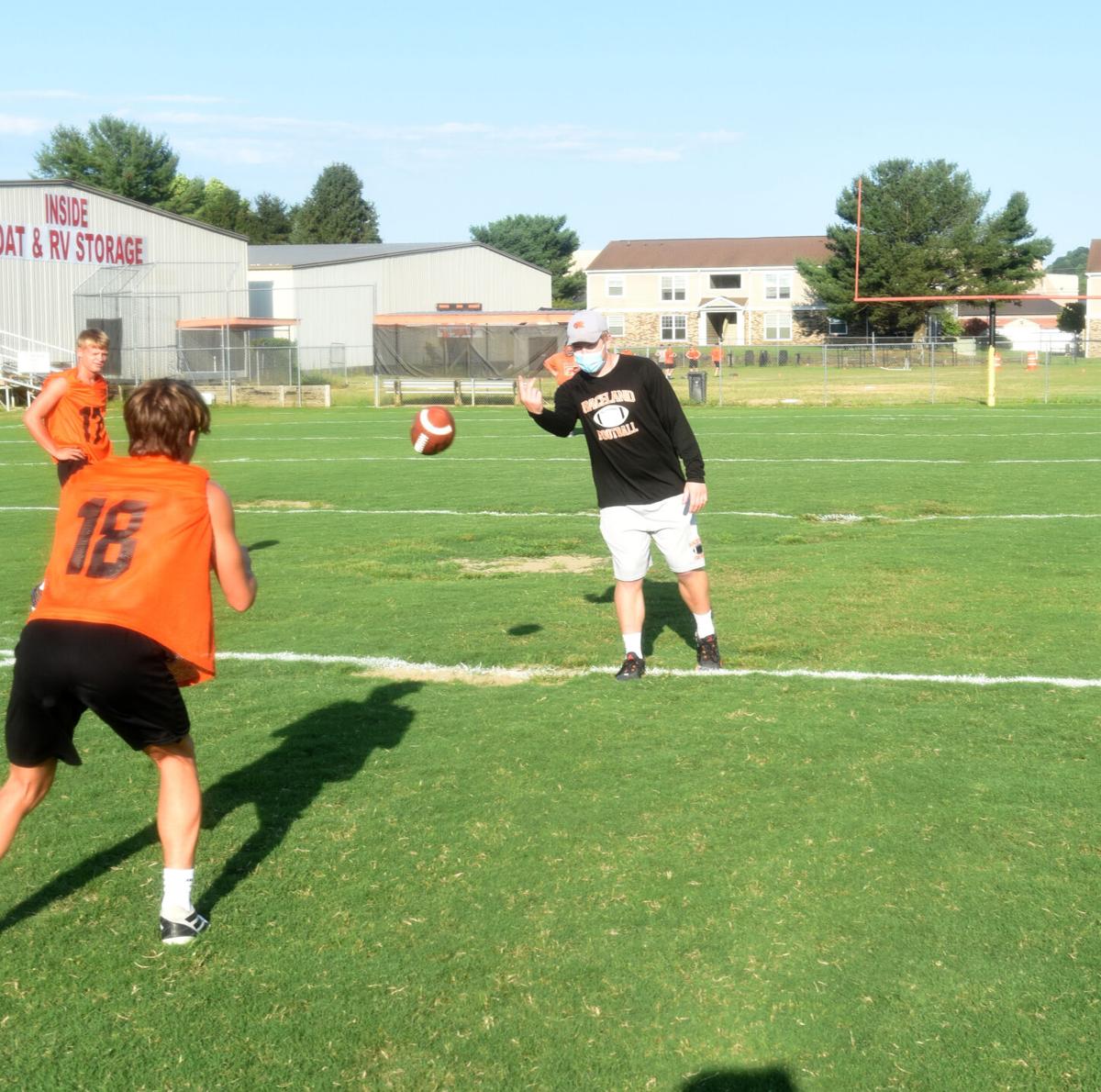 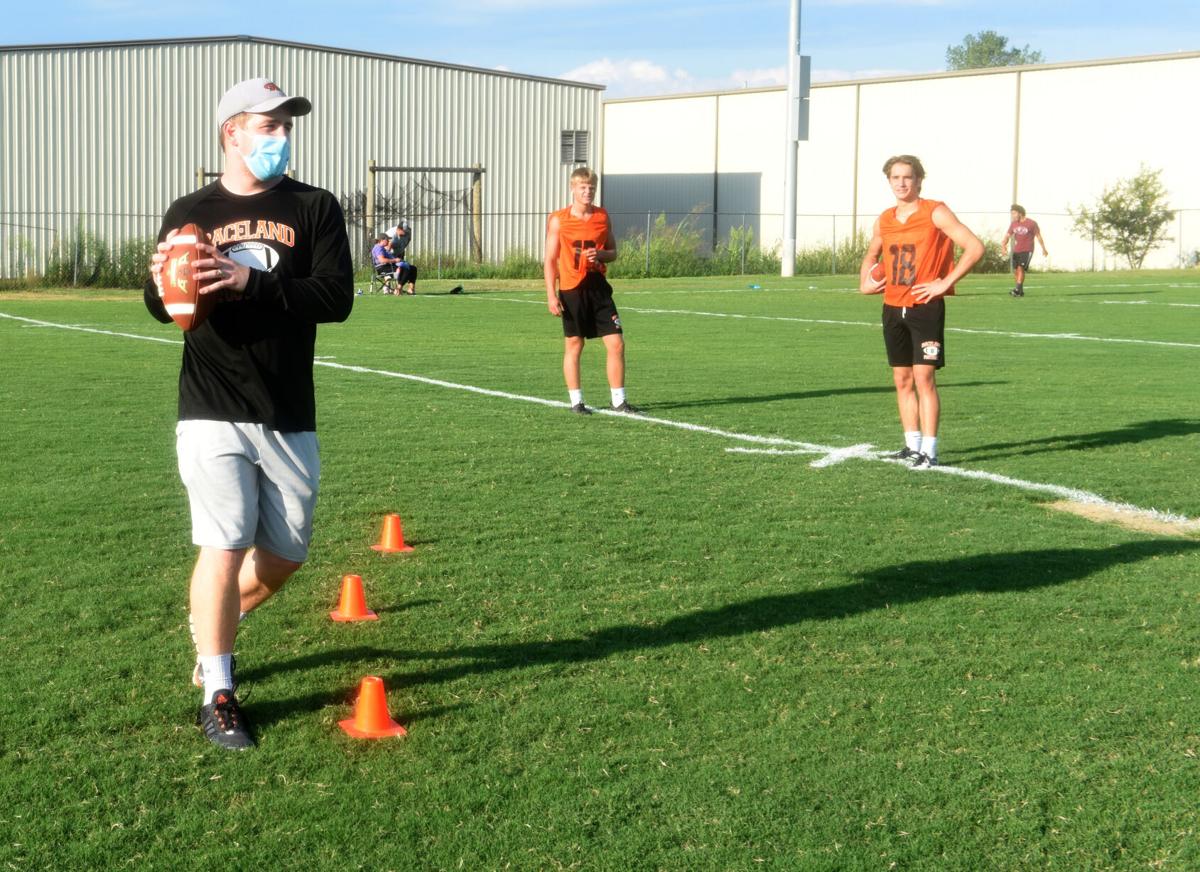 Quarterback coach Connor conducts a drill during a recent workout as quarterback candidates watch from a distance. 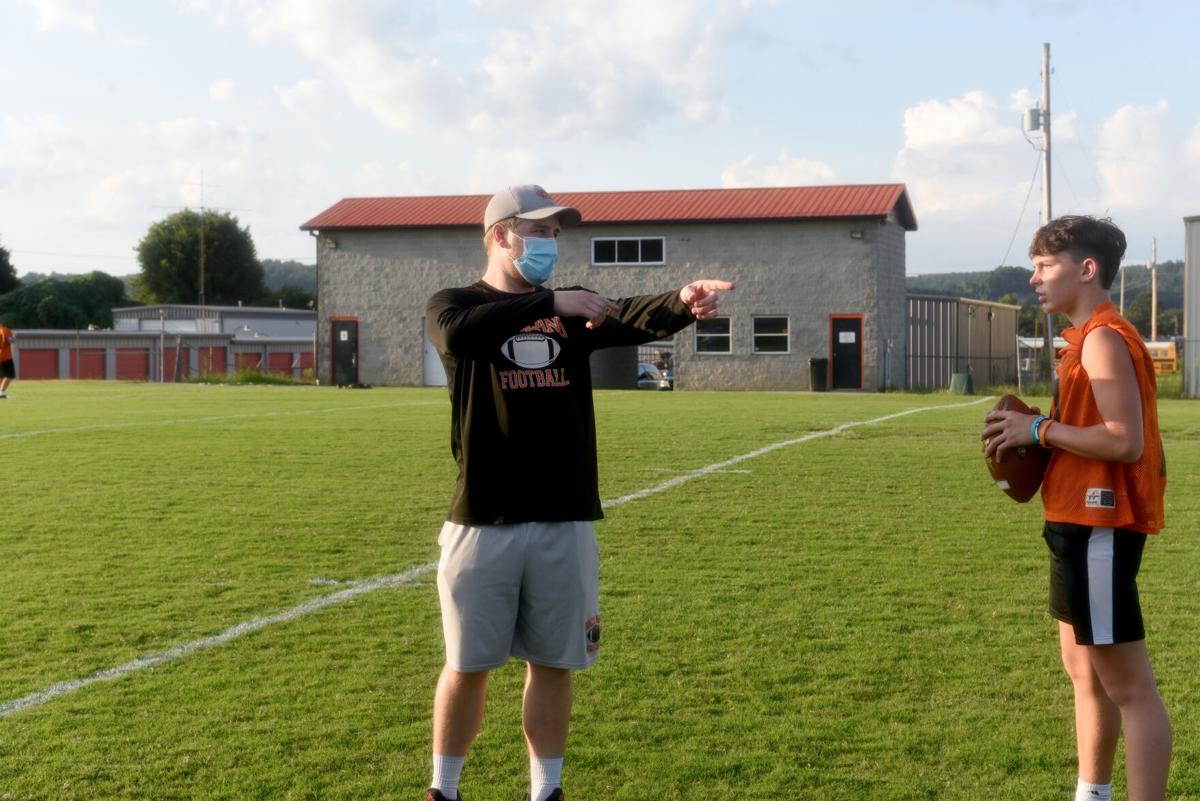 Sophomore Holden Topping listens to coach Connor Devine as he goes over a play. 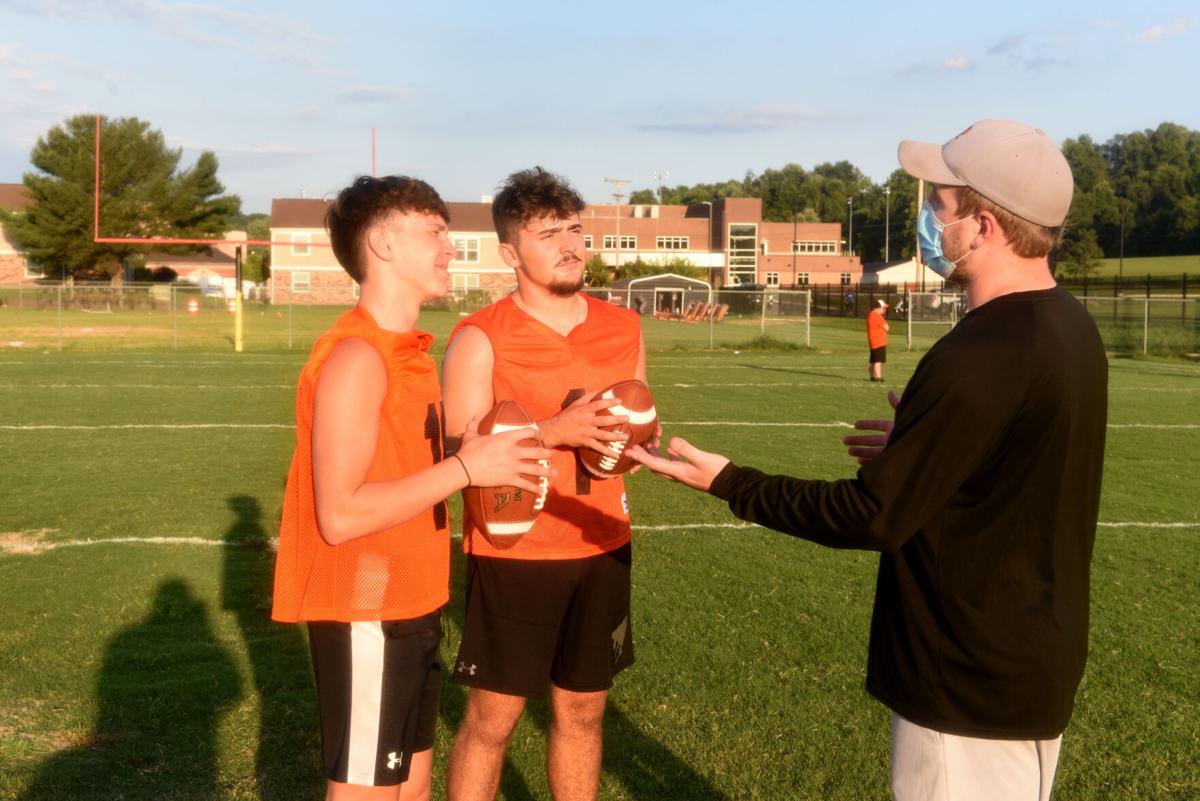 Quarterback coach Connor Devine goes over what he expects in the next drill as Holden Topping (left) and Jake Heighton pay attention.

Junior Conner Hughes gets in a few tosses in before he starts his workout.

Freshman Parker Fannin gets in a few warm-up throws before a workout last month.

Junior Conner Hughes works on his footwork before a workout last month.

Quarterback coach Connor conducts a drill during a recent workout as quarterback candidates watch from a distance.

Sophomore Holden Topping listens to coach Connor Devine as he goes over a play.

Quarterback coach Connor Devine goes over what he expects in the next drill as Holden Topping (left) and Jake Heighton pay attention.

Connor Devine is entering his fifth season as a quarterback coach at Raceland, and certainly fits the billing of having an intriguing day job.

Devine is an engineer with EN Engineering in Catlettsburg. He’s originally from Marysville, Ohio, and is a graduate of Ohio Northern University in Ada. He played quarterback and long snapper for the Klondikes while majoring in civil engineering.

He learned of his current job opportunity at a college career fair.

“At the career fair, there was someone from EN Engineering,” Devine said. “I went up to their table and started talking with them, and ended up getting an interview.

“Next thing you know, I had a job offer to work down in Catlettsburg, Kentucky.”

Devine would work more than one job after switching his career to the Bluegrass State, however.

In college, Devine expressed interest to his own coach, Dean Paul, in becoming a coach down the road.

Paul is in his 17th season at Ohio Northern, but started out at Thomas More. In Paul’s first season with the Saints, he coached a familiar local name: Michael Salmons.

Salmons and Paul stayed connected over the years, primarily over social media.

In 2016, Paul reached out to Salmons about the prospect of Devine joining his staff.

“‘You guys need to hook up, he would be a great addition to your staff,’” Salmons said. “That was kind of the DM on Twitter from coach Paul.”

Soon, Devine and Salmons linked up for dinner and shortly after, Devine was on the staff.

Devine coached alongside longtime Rams coach Randy Vanderhoof to aid with quarterbacks in his first year.

When Vanderhoof left to coach at Kentucky Christian in 2018, Devine was next in line to take charge over the Raceland signal-callers.

Salmons has no doubt Devine has made an impact on the team throughout his tenure.

“The thing about coach Devine that I think is probably invaluable is his character,” Salmons said. “He’s a high-character, fantastic role model for the young kids that we run through our program.

“He’s super, super intelligent. He’s an engineer, so he’s very intellectual, very well-spoken and very well-versed in a lot of different areas. He’s a positive role model for our kids.”

Devine works among a variety of engineers at EN Engineering, and his daily tasks are ever-changing.

“For me on a day-to-day basis, it all just kind of depends on what projects we have for these clients,” Devine said. “It could consist of me doing some foundation designs for a tank or something like that, or the design of a platform and a set of stairs within their refinery.”

Duties at Devine’s work consist of many calculations as well as drafting drawings and reports to send to clients.

“Engineering is really just, you’ve got a problem and we’ve got to find a way to come up with a solution,” Devine said.

The same principle could be applied to Devine’s night job.

Take last year, for example. Raceland starting quarterback Jake Heighton was injured in the Rams’ second game at Russell and missed more than a month due to injury.

In entered backup Conner Hughes, who helped lead Raceland to a 2-2 record, posting eight passing touchdowns and just one interception during that span.

“Coach Devine is extremely in control of his emotions at all times. He’s very poised,” Salmons said. “I think that kind of transpired over into Conner as well as far as being in intense moments, very emotional moments, yet being able to control his emotions.

“I think that was a very big part in why we were able to see Conner develop over the five or six weeks that he was the quarterback of our football team.”

Devine even said he sees a correlation between his two careers.

“You adjust the offense the way you need to to solve the problem or come up with a solution, so I would say that it’s a concept of figuring out what the best solution is for each year as a coach,” Devine said. “That’s kind of the same in the day-to-day as an engineer — you’re trying to solve problems.”

Through the four years Devine has coached with the Rams, Raceland has posted 101 passing touchdowns and 41 interceptions. The Rams are also averaging 167 passing yards per game during that span and have twice topped 2,000 overall passing yards in a season.

Devine hopes to continue coaching as the years go by. He comes from a family with great pigskin knowledge: his brother is a coach in Marysville and his father coached in college and was a scout for the New York Giants.

“I’ve always liked the idea of staying involved,” Devine said. “Football was my favorite sport, so I always hoped to stay involved with coaching and helping out kids.

“Raceland has been a pretty good football program here for a while. I think I’ve been lucky to have had the opportunity to join a program like that.”

Along with Salmons, Devine credits his family, including wife Anna and daughter Amelia for their support over the years.

As long as Devine hopes to continue roaming the sidelines and aiding quarterbacks in the area, Salmons wouldn’t mind continuing to see him don a Rams polo on Friday nights.

“I always say in management, or business, or coaching, or whatever, you want guys on your staff that make you look good, that are smarter than you,” Salmons said. “He most definitely fits that role.”