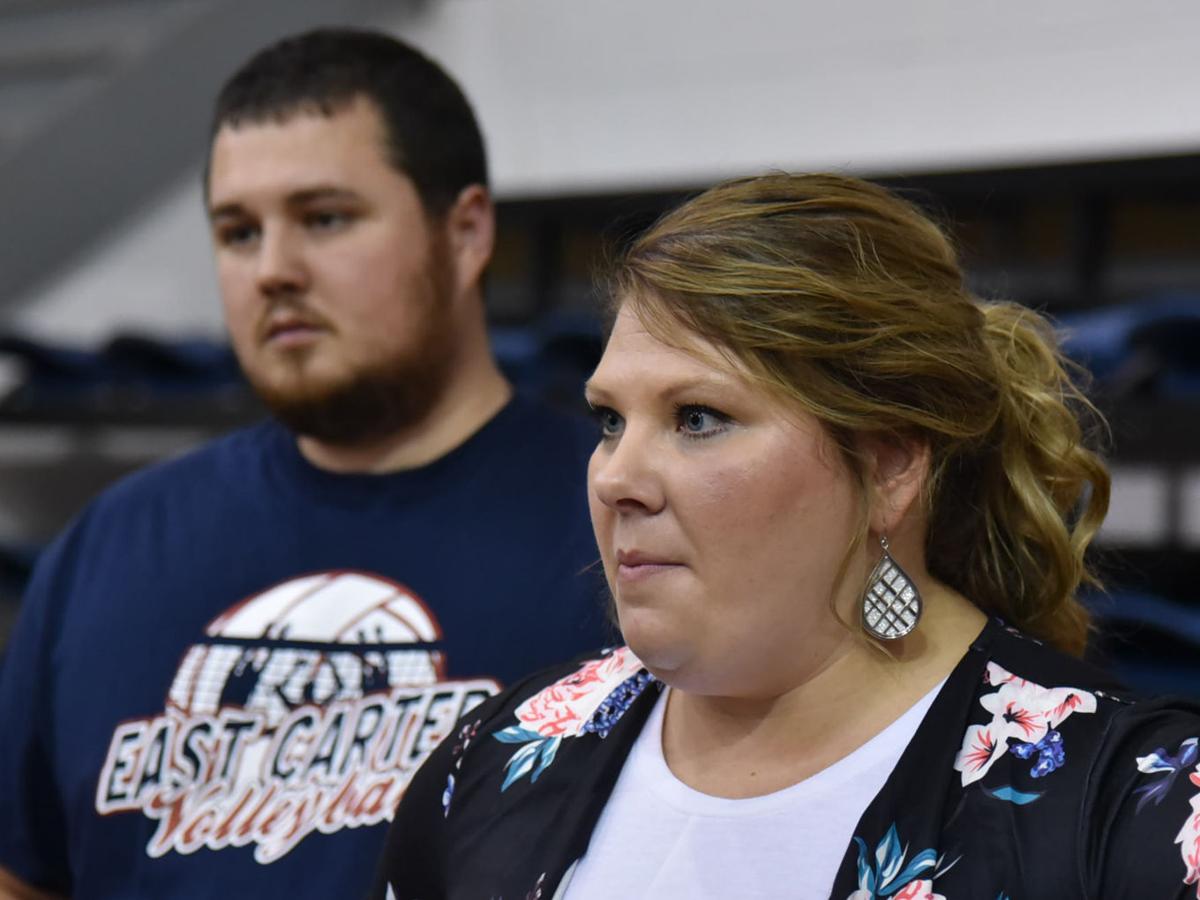 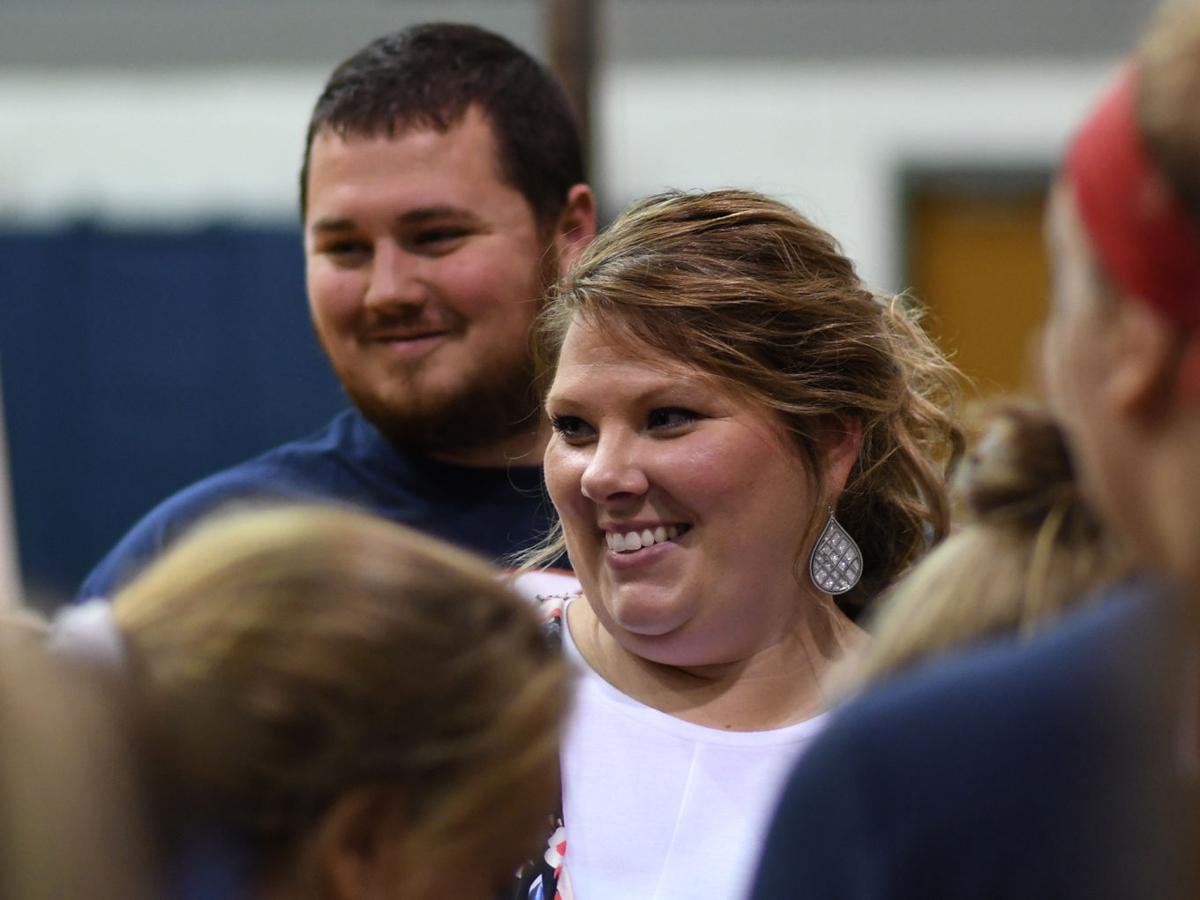 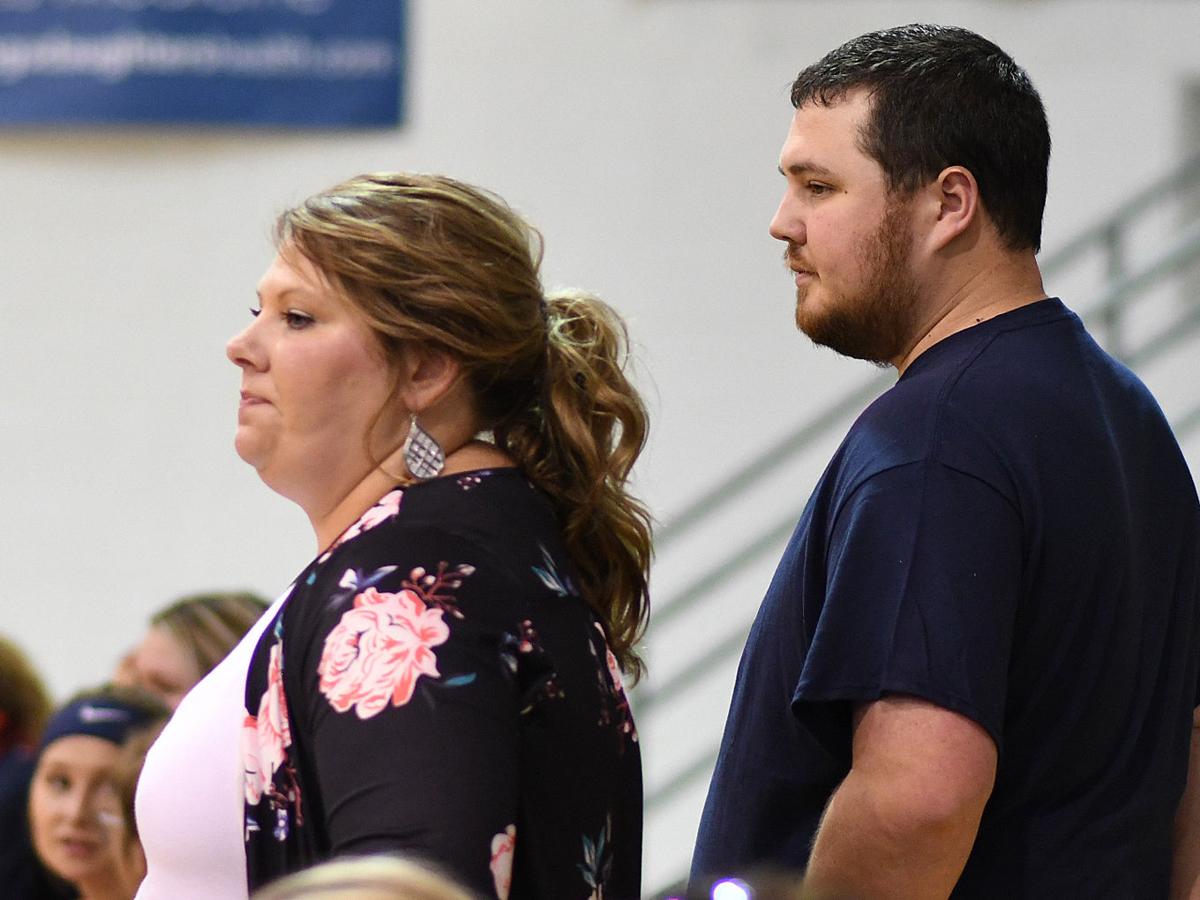 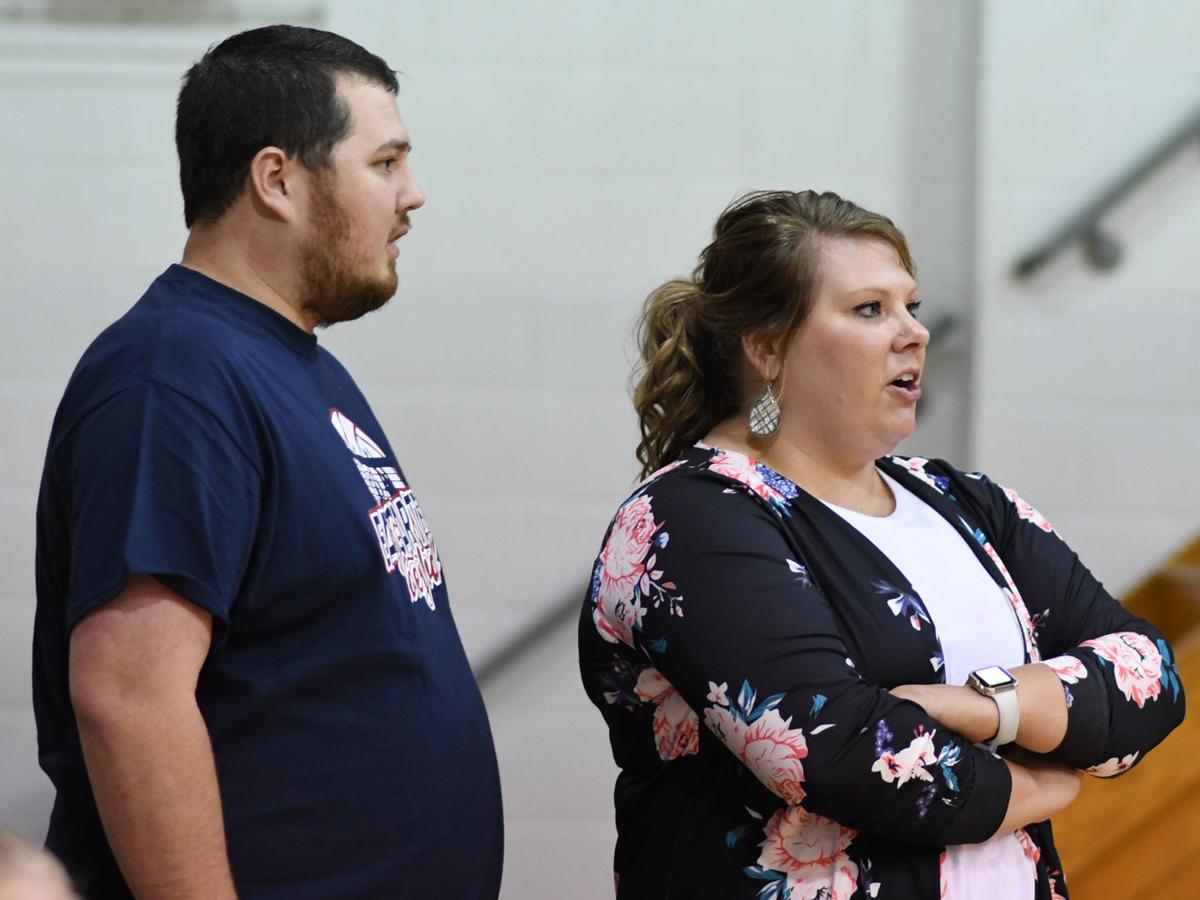 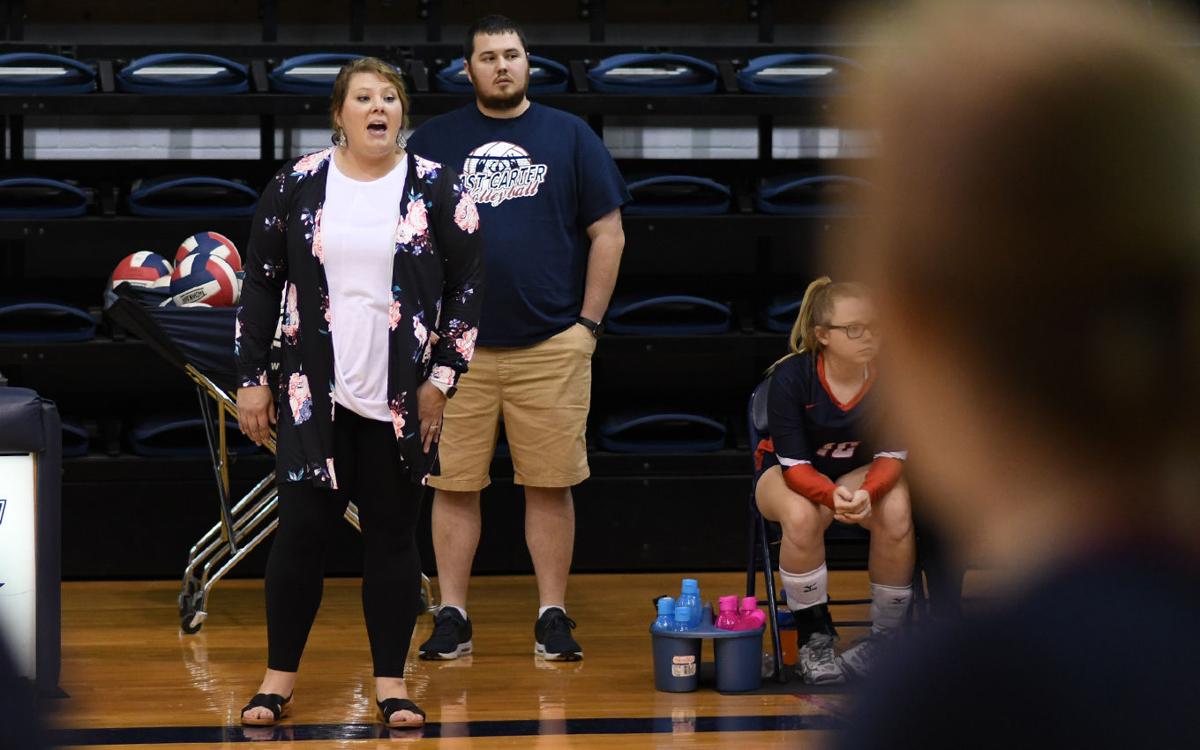 GRAYSON Jennifer Clark had never coached before. Matt Clark thought he was finished coaching, at least for now.

Then East Carter, already enduring only its second coaching change in the 20 years of its volleyball program, found itself in need at the metaphorical 11th hour. The Lady Raiders had to make another switch in the last week of the preseason when new coach Taylor Dixon resigned due to complications in her pregnancy.

“I was really nervous,” Jennifer Clark said. “I have taught every single one of these girls in middle school, and I love them dearly. I was nervous to take the role from P.E. teacher, because I love these girls and we have a great relationship, to coach, because I didn’t want to injure that relationship. But once we’ve gotten started, I think I can transition the role and the girls can see me in a different light.”

Jennifer Clark actually turned down the job the first time it was offered to her, she said. East Carter principal Kelley Moore and athletic director Brandon Baker found no one else interested in and/or appropriate for the job.

Baker said he didn’t want Clark to feel “obligated to do it,” but they floated the idea again.

“I really just couldn’t let the girls down,” Jennifer Clark said. “I really wanted to help them out, and I wanted them to have a season. I’m probably not the best fit, there’s things I have to learn, but I’m learning and everyone’s adjusting.”

Jennifer Clark brought familiarity with the sport, having played it at the high school level at Eastern in Pike County, Ohio. She’s displayed her expertise by installing the 5-1 offensive system, which uses the same setter regardless of rotation — in this case, junior Kileigh Boggs — as opposed to rotating two setters depending on where the rotation is.

“I think that is working fantastic,” Clark said. “We have some tweaks to do, but I think the girls are really loving the setup. They like the consistency of Kileigh. We just have to work on that communication.”

Clark had not coached anywhere before, but her husband brings expertise there.

Matt Clark, an East Carter High School assistant principal whose last gig before that was baseball coach and P.E. teacher at cross-county rival West Carter, coached multiple sports at Rowan County and Graves County before his time in Olive Hill.

The Clarks met at Morehead State, where Matt Clark played baseball. Matt, 34, went to high school at Cumberland, which has since consolidated into Harlan County.

As the Comets’ baseball coach the last two seasons, Matt Clark led the program to its fifth and sixth consecutive trips to the 16th Region Tournament, a school record, as well as the 62nd District Tournament title this past spring and an 11-win improvement from the year before.

“I’ve always been a coach,” he said. “Ever since we’ve met, she didn’t know anything else with me.”

Matt thought he was authoring a new chapter. He remains West Carter’s baseball coach on paper, but the job will be posted in September, he said.

Matt is stepping away from that job in part because of another wrinkle — an adorable one. Jennifer gave birth to Matthew James Clark II on June 2, six days after the Comets’ baseball season ended in the region tournament semifinals.

“I thought we had some time to get things in order,” Matt said wryly, holding his son, “but not so much.”

That’s because Matthew II was born five weeks and four days ahead of schedule, Jennifer said. He spent 22 days in the neonatal intensive care unit, but now, “he is growing and thriving and just absolutely perfect,” she said.

Finding all-encompassing childcare is another new challenge, as any parent of a newborn quickly learns. The community has stepped in to help.

“They say it takes a village to raise a child, and really, that’s what’s happening,” Jennifer Clark said. “He’s a part of every practice and every game also. He’s in the stands being passed around. I try to find him occasionally. It’s just a family affair.”

That’s the mentality she would like to institute for the Lady Raiders, too, for a program that was all of a sudden in need of a stabilizing force.

As the Clarks got up to speed, East Carter rescheduled its opener with Russell and called off one of two matchups with Bath County slated for the early going.

The Lady Raiders then swept the Lady Cats in Owingsville on Tuesday before a five-game loss to Fairview in the home opener on Thursday.

“Things are starting to smooth out for us,” Baker said. “I think our girls were anxious to start games and they were ready for the season to start. Once they got to practice with the new coaches, they’re more relaxed. They’re starting to get comfortable. Now, our community has to realize what we got happening here and embrace this team and this coaching staff, and things could work out very well for us.”