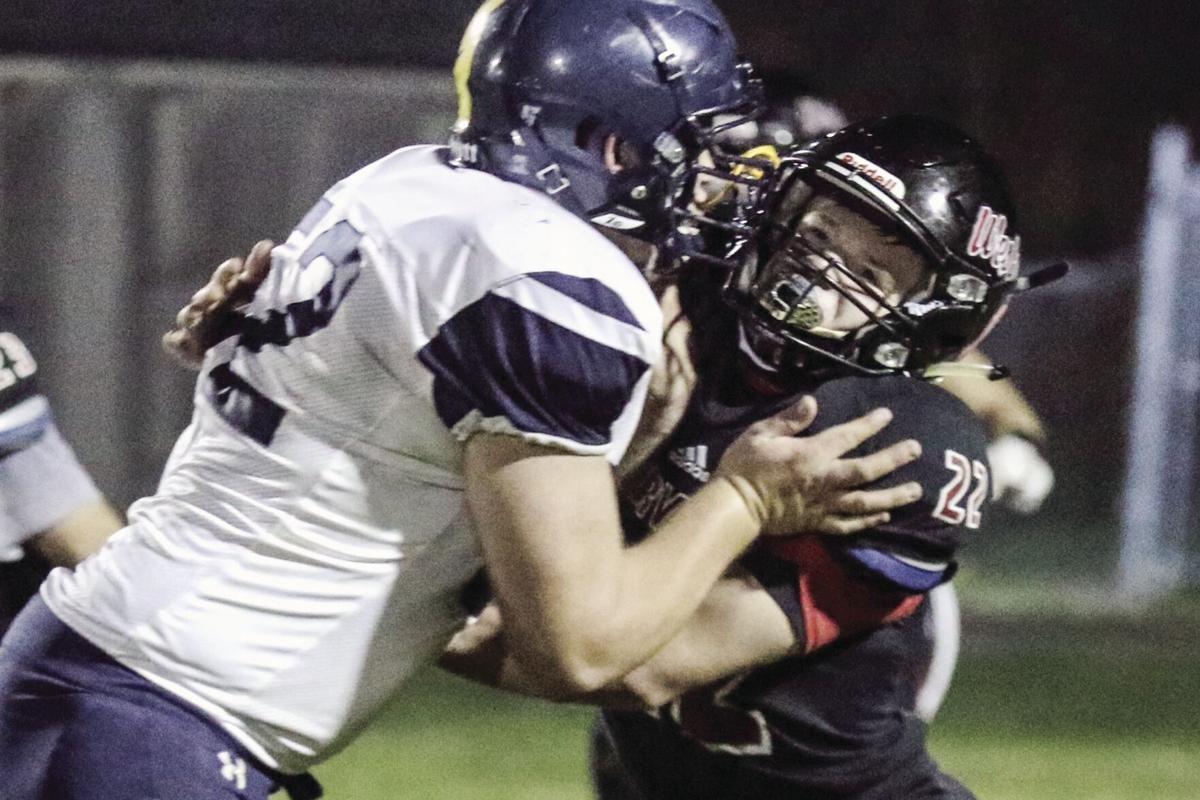 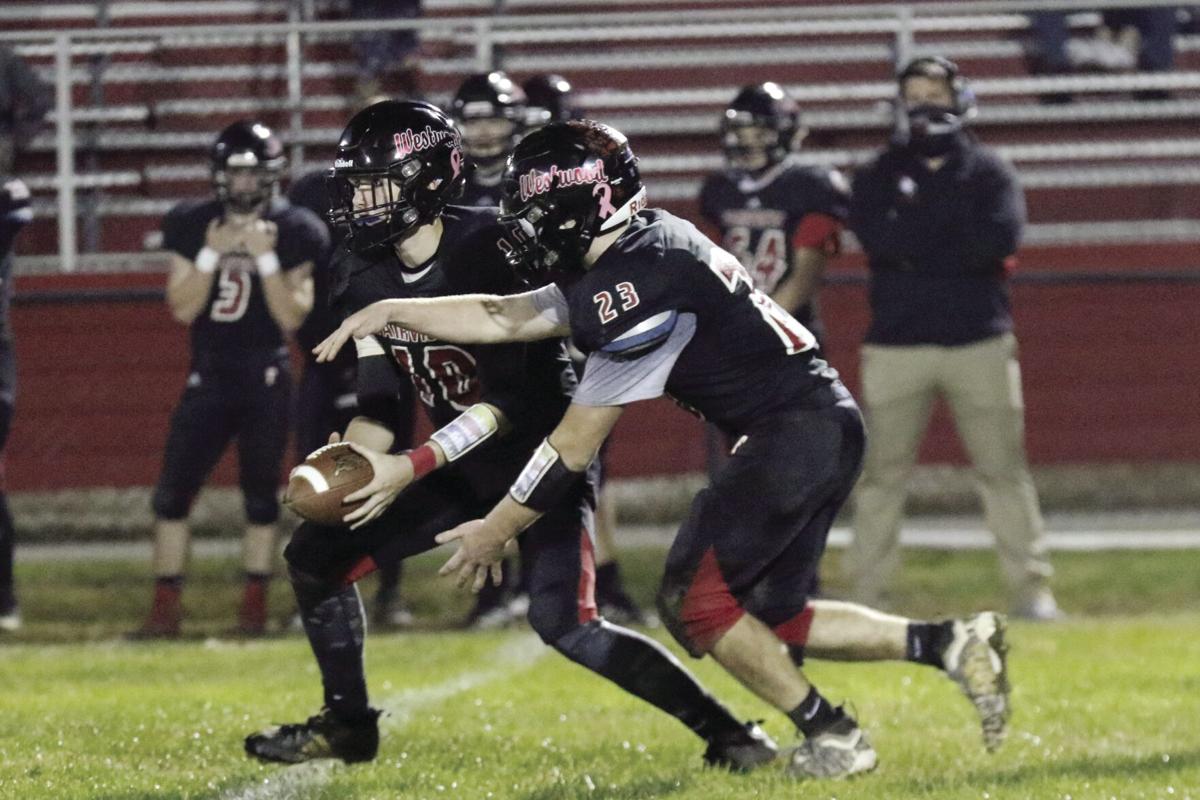 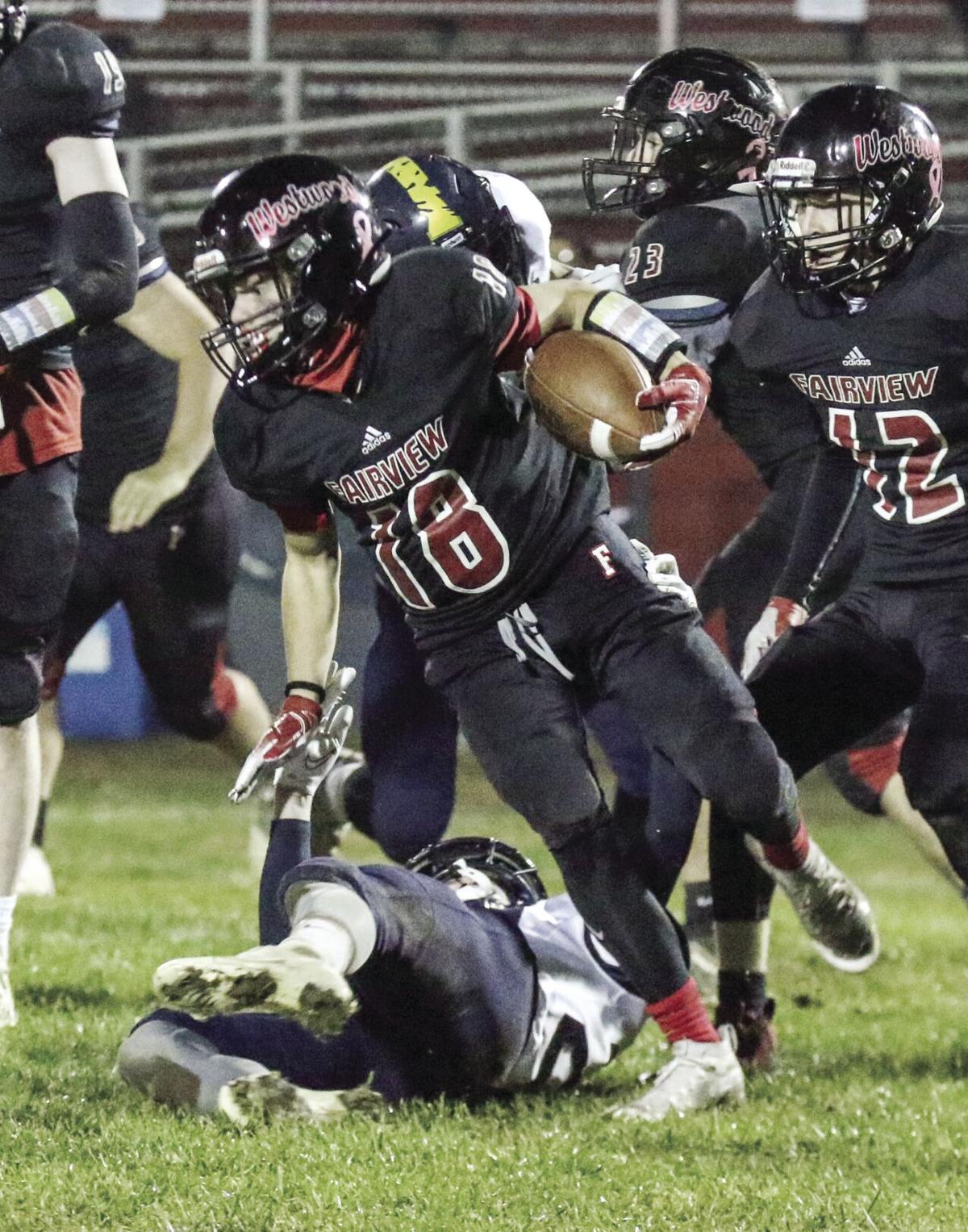 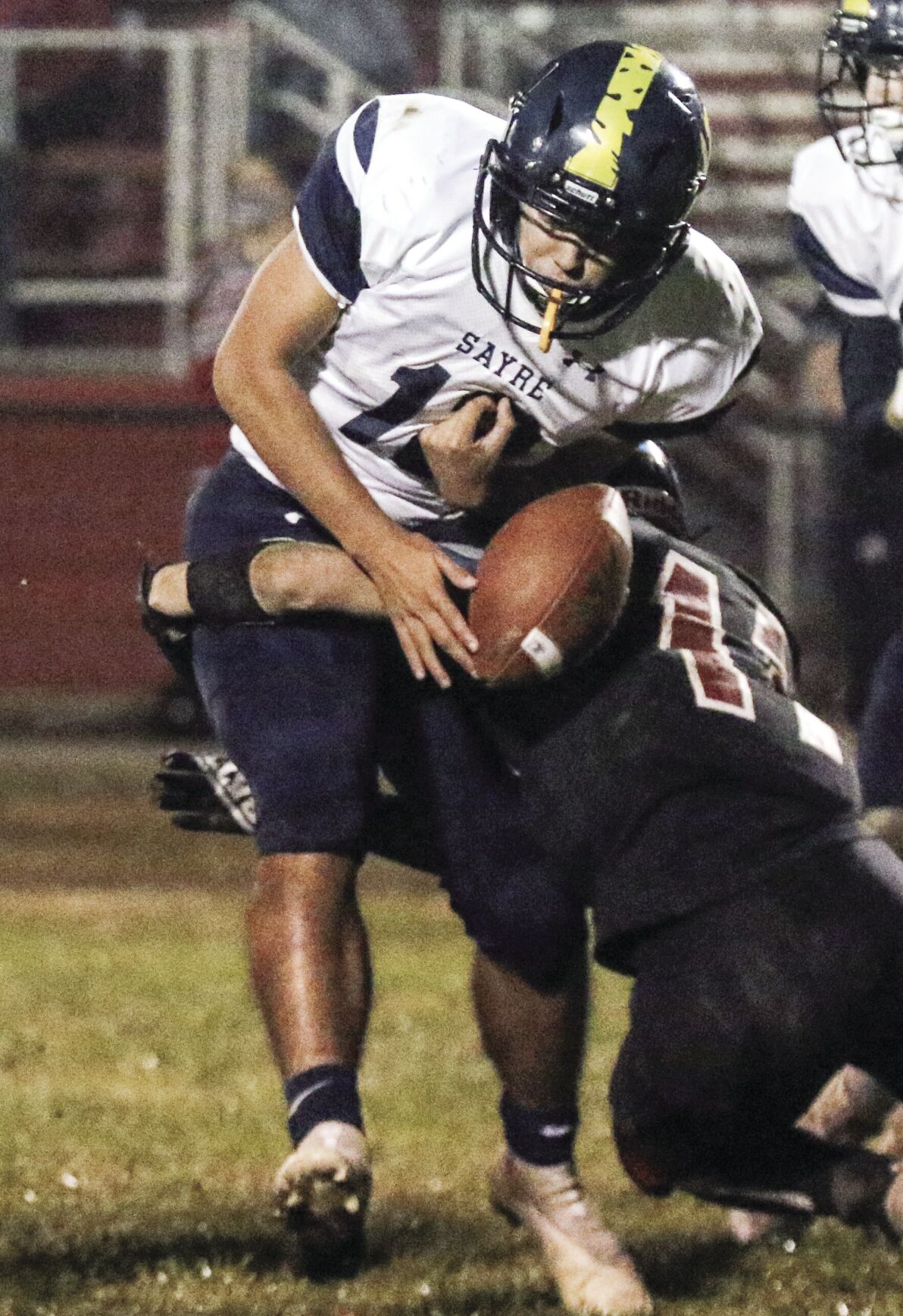 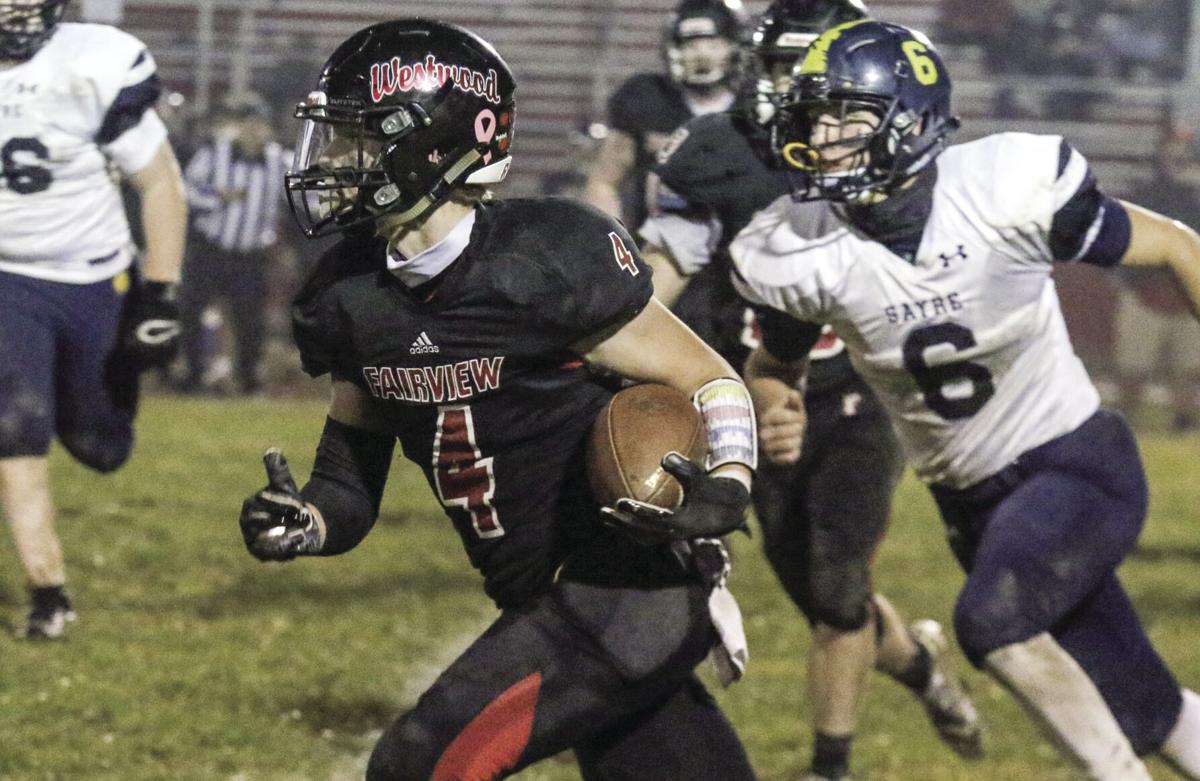 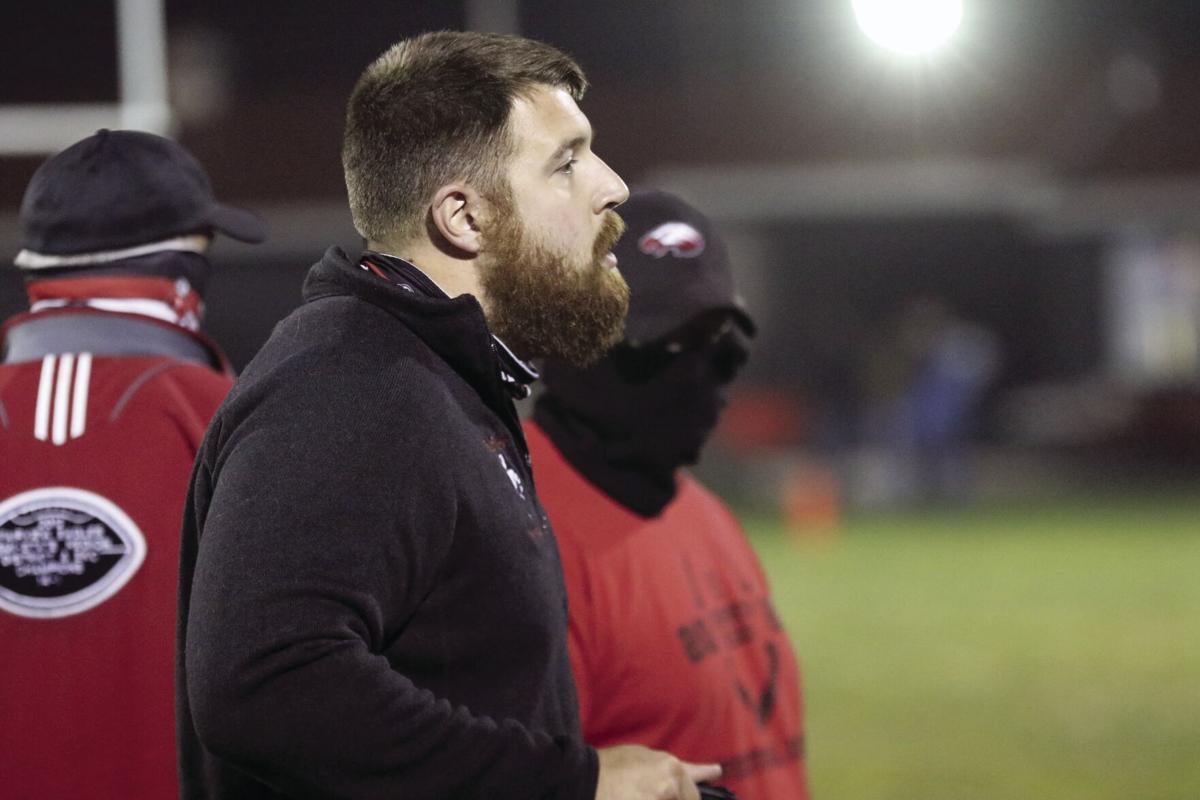 Matt Jones | The Daily Independent Fairview Coach Daniel Armstrong calls a play in from the sideline during Friday’s game. 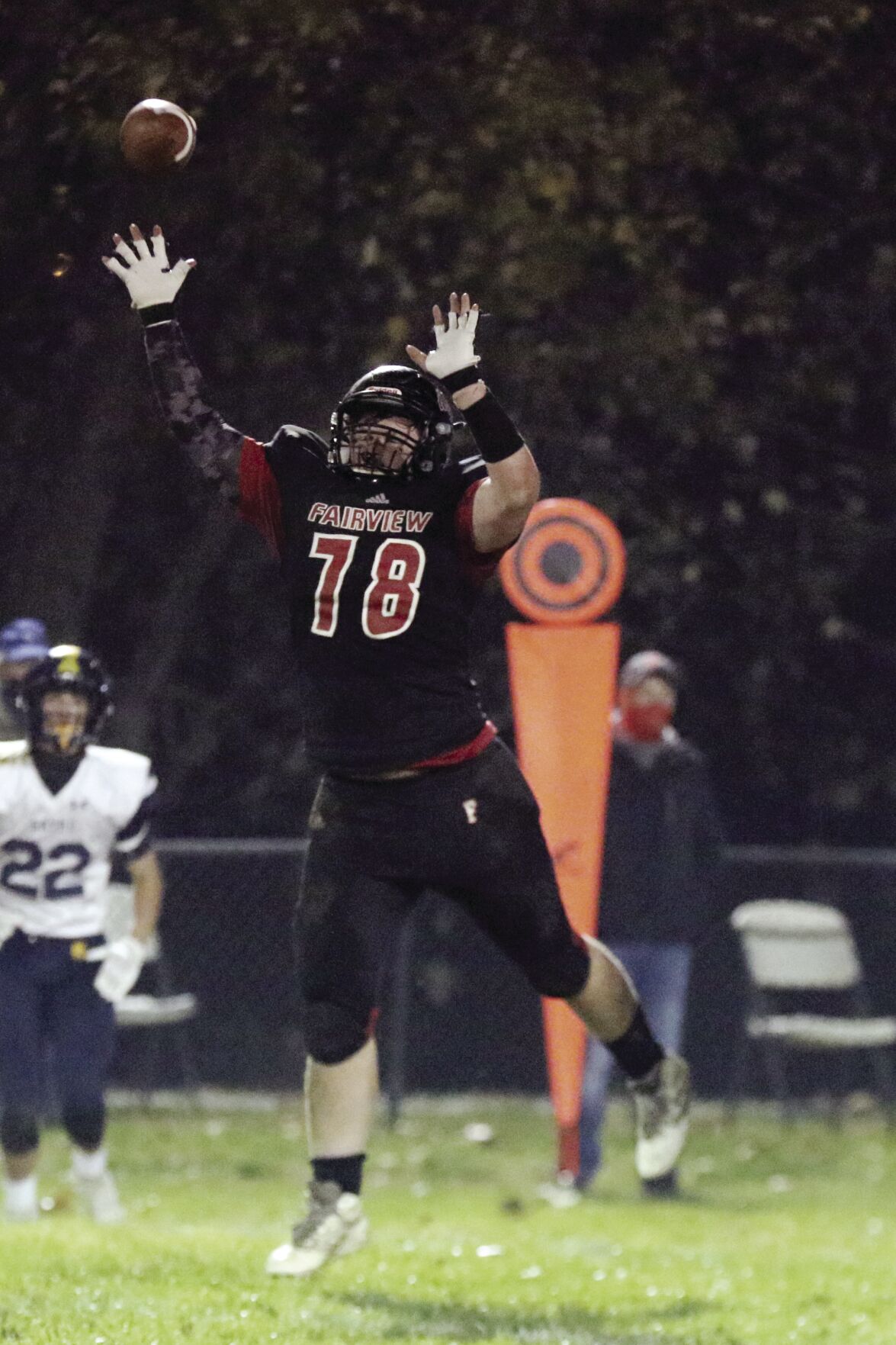 Matt Jones | The Daily Independent Fairview’s Brennan Murray attempts to block a pass attempt by Sayre during the third quarter of Friday’s game. 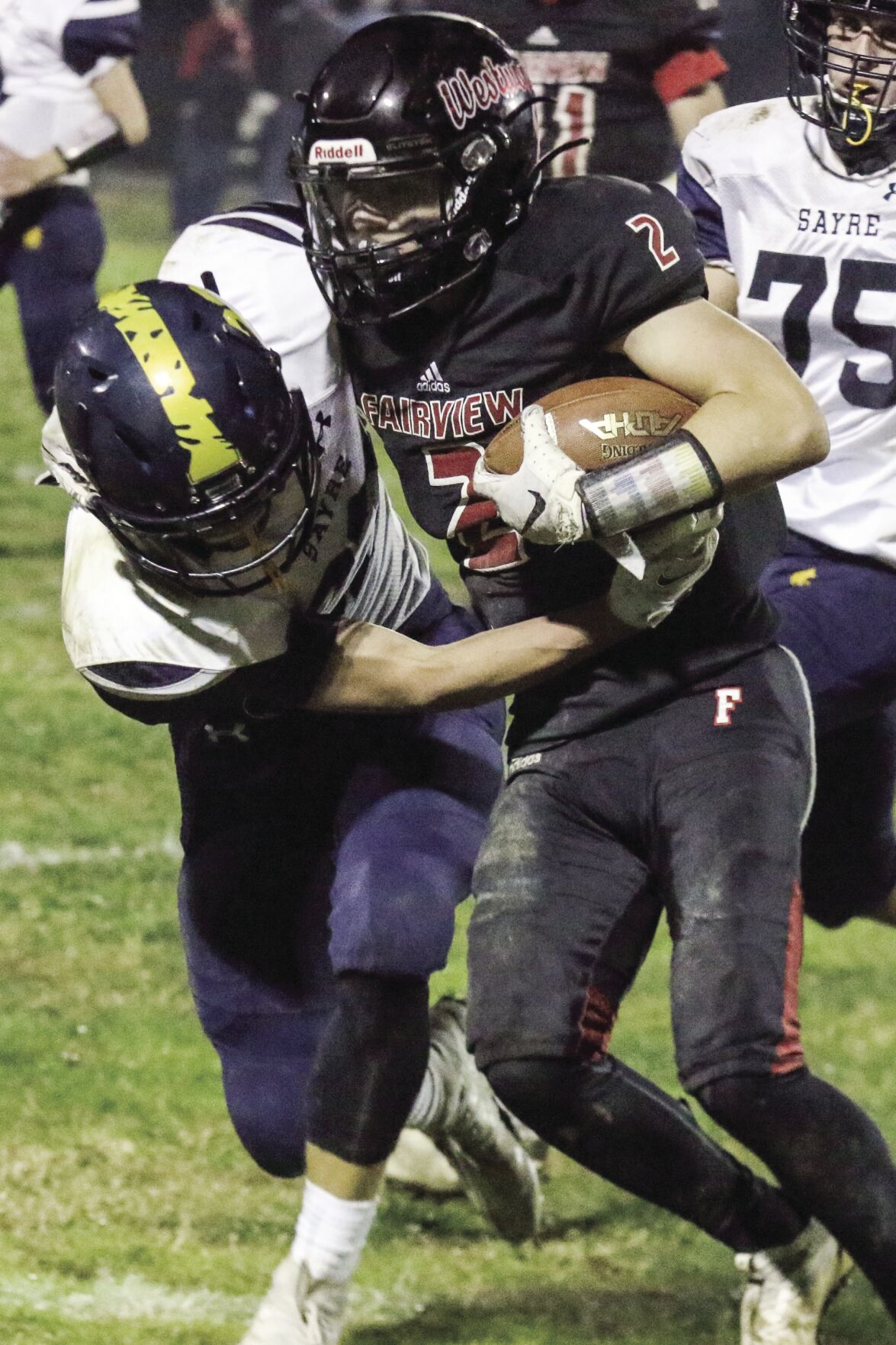 Matt Jones | The Daily Independent Fairview Coach Daniel Armstrong calls a play in from the sideline during Friday’s game.

Matt Jones | The Daily Independent Fairview’s Brennan Murray attempts to block a pass attempt by Sayre during the third quarter of Friday’s game.

WESTWOOD Daniel Armstrong didn’t necessarily intend to schedule a team that would tie for the most wins in the state when Fairview signed up Sayre this summer for the regular-season finale.

Even after the Eagles’ 48-14 loss to the undefeated Spartans on Friday night, their coach saw some benefit from the encounter.

“We thought Sayre would be a little bit more of a similar level as us, but they weren’t and it turned out to be a good thing for us because we saw a style of football that we don’t necessarily see,” Armstrong said. “We’re used to really super physical downhill running teams, like at Raceland and Paintsville. They get in the spread and run the football. Sayre’s not really that style team, and they kinda exploited our inexperience seeing that type of team, so moving forward, I think our kids are gaining in-game experience against a variety of football teams, and in doing that, we’re gonna be better from it.”

The Spartans, rather, are the style of team that got seven different receivers touches in the first half and six players into the end zone before intermission.

Quarterback Cole Pennington, who holds an offer from Marshall and came into the game ranked second in Class A in passing yards per game, orchestrated all of it. He completed 12 of 15 passes for 199 yards and three touchdown passes.

“Our skill guys have worked really hard on their timing and their catching ability,” said Sayre coach Chad Pennington — yes, that Chad Pennington, the Marshall alumnus and former NFL signal-caller. He’s also the father of the Spartans’ QB. “And Cole’s done a good job of having good field vision and not focusing in on just one receiver. We love trying to spread the ball around and get everybody in the mix.”

They did a good job of it. Pennington threw scoring passes to Ford Webb, Trey Dennis and Cory Givens, and Caleb Kern and Jackson Marshall rushed for TDs.

Fairview (2-6) lingered within a score at 14-6 after Jeremy Harper took Tanner Johnson’s pass into the flat 4 yards for a score with 2:29 to go in the first quarter. But Sayre (8-0) rattled off 34 straight points after that, beginning when Dennis caught a 23-yard touchdown toss 58 seconds after Harper’s TD.

The Eagles were down three defensive starters, Armstrong said, including one who got banged up in pregame and couldn’t go. That didn’t help against Sayre’s offensive depth.

“They’ve got a lot of playmakers,” Armstrong said of the Spartans. “Obviously their quarterback’s excellent and well-coached. He’s probably the most accurate quarterback I’ve seen in high school football as a coach.”

Sayre effectively used a touch pass off a jet sweep to gash Fairview time and again, beginning with Cole Pennington’s tip to Dennis for 44 yards on the first play from scrimmage.

“They ran that jet sweep play extremely effectively, and that put us on an island and put me behind the 8-ball a little bit,” Armstrong said. “We tried to make some adjustments after the first quarter, and sometimes you run into a team with some better athletes than you and that’s just how the cards fall.”

Fairview closed the game on Cody Caldwell’s 26-yard scoring reception in the final minute, followed by Johnson’s scoring run on the two-point try.

Johnson rushed for 113 yards, though the Eagles collectively finished in double digits on the ground because of two big losses on wayward snaps from punt formation. He completed 10 of 16 passes for 99 yards, two TDs and no interceptions.

Marshall rushed three times for 70 yards and two scores, and Dennis hauled in three passes for 88 yards for Sayre, which joins Elizabethtown and Owensboro as the only teams in the state to go 8-0 this regular season. The Spartans were 1-7 last fall.