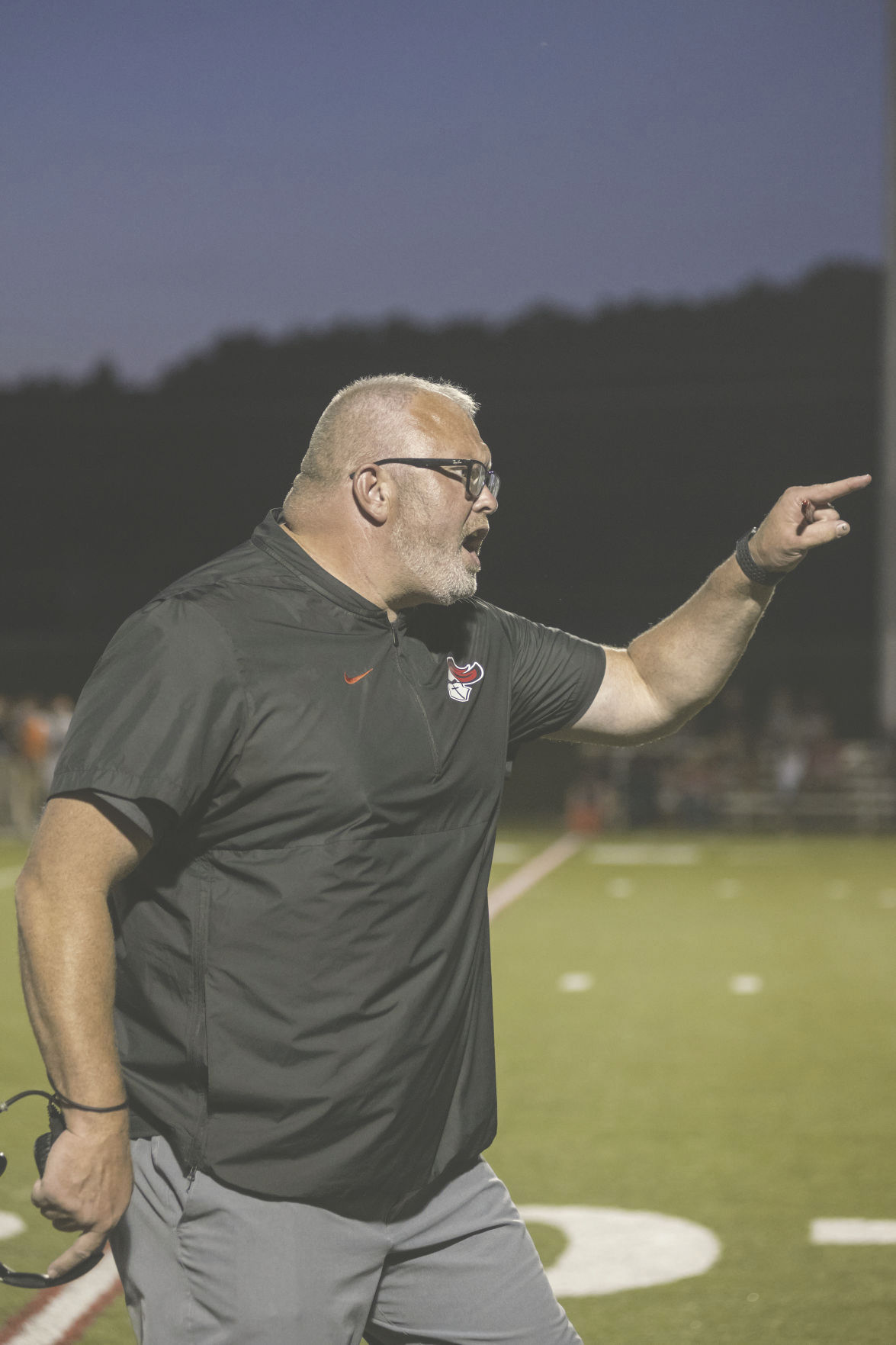 KCU coach Corey Fipps talks to a referee during the Knights’ victory over Georgetown College on Sept. 7. 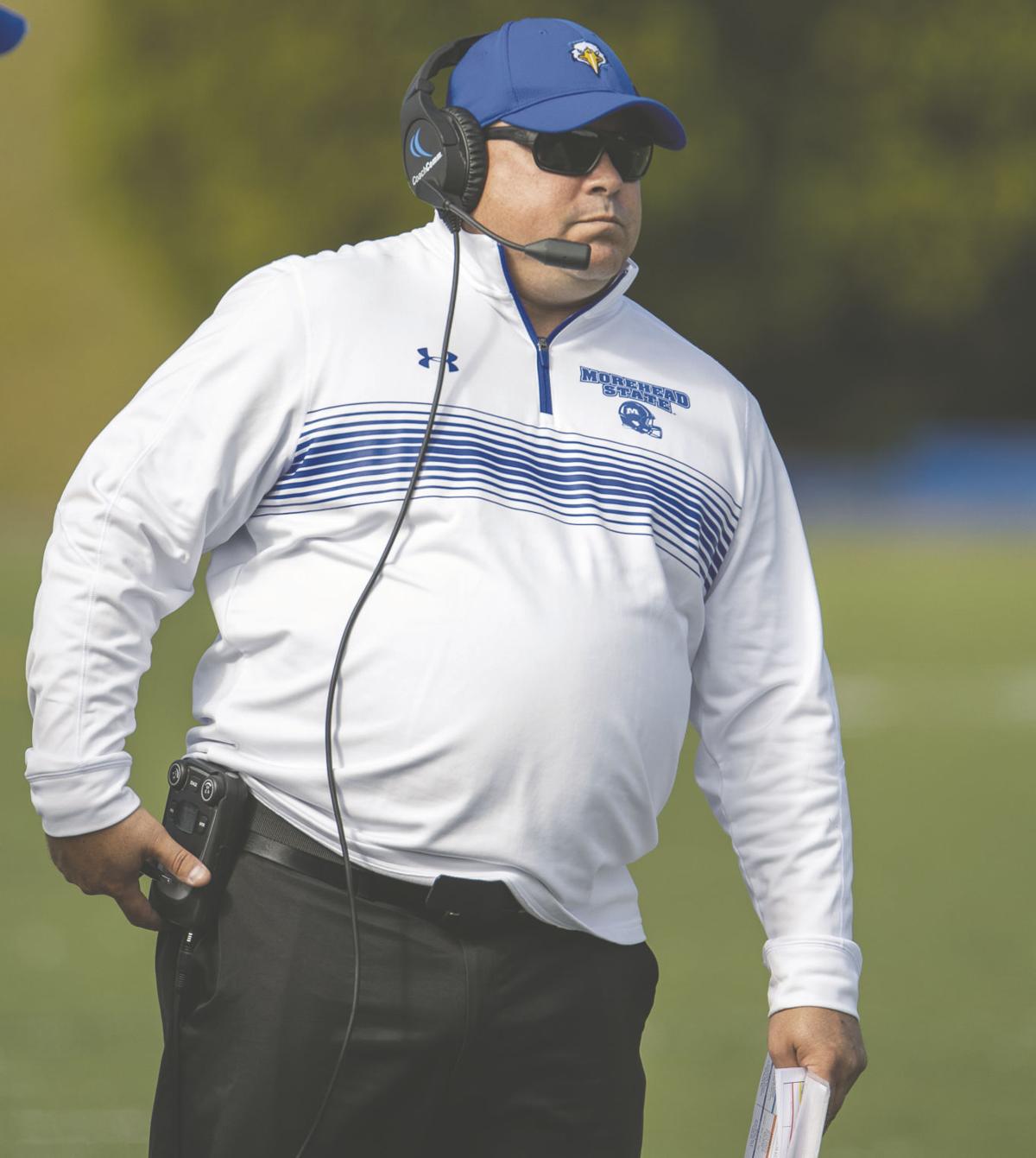 Morehead State coach Rob Tenyer looks on as the Eagles take on Butler on Oct. 19.

KCU coach Corey Fipps talks to a referee during the Knights’ victory over Georgetown College on Sept. 7.

Morehead State coach Rob Tenyer looks on as the Eagles take on Butler on Oct. 19.

Corey Fipps answered the question with the force of a blindside quarterback sack.

Kentucky Christian University’s football coach and athletic director was asked in late April whether he would save money by eliminating some of the Knights’ 17 teams. His answer was brief and blunt.

“That is definitely not what we are looking to do,” Gordon said. “There are clearly some challenges ahead of us. … The hard thing is that right now we don’t know the impact this will have; we’re hopeful we’ll be back in school come fall.

“Eliminating sports is something you can’t go back and fix.”

The first novel coronavirus-related cuts began in April, when the University of Cincinnati dropped men’s soccer and Old Dominion University discontinued wrestling. Locally, residential summer sports camps at both schools are either gone or in jeopardy.

The obvious worry: men and women who run college football programs from Washington State to Kansas State to Florida State – members of the Power Five conferences (Big 12, Big Ten, Atlantic Coast, Southeastern and Pac 12) fret over football revenues. They’re worried about partial schedules, playing in the fall, spring or not at all, and whether fans will be allowed to fill stadiums.

“I’m pretty optimistic at this point of a full (football) schedule,” Morehead State football coach Rob Tenyer said. “I think we’ll have to get into, really, probably end of May, early June until we get something really concrete.”

Morehead State football is a non-scholarship sport. (MSU is a member of the Pioneer Football League and the Ohio Valley Conference for everything else.) Gordon said the NCAA eliminating the men’s and women’s basketball tournaments in March was a greater wallop to the wallet.

Like Morehead State, KCU, an NAIA Division II member, competes in two conferences – the Mid-South football and the Appalachian Athletic for the rest. Both groups allow partial scholarships.

Another similarity: Travel is one of the two biggest expenses.

This year football itinerary tentatively calls for journeys to Marist College (1,410 miles to Poughkeepsie, New York) and a Sept. 19 excursion to the University of Montana (3,908 miles to Missoula).

Tenyer is at least glad 2020 recruiting mostly ended before COVID-19 invaded, and he says he’s installed about half the playbook.

KCU’s football bus rides are not as lengthy. The Knights travel to Ave Maria University in Florida (a nearly 15-hour drive each way) Sept. 19 and two trips to Georgia – Point University in West Point, near the Alabama border, and Rinehardt University in Waleska, not quite 50 miles north-northwest of Atlanta.

One of the myriad of 2020-21 proposals calls for every sport to be played next spring. Fipps said it wouldn’t work at KCU.

“I just don’t think we have the resources in terms of game-day operations to try to force it all in,” Fipps said. “I think we’ll potentially have abbreviated schedules in the fall.”

“We won’t have any of those this fall,” he said. “Last year we added track and field and bass fishing; both are enrollment drivers for us.”

Fipps says the next 21 days will determine what happens this fall, Gordon believes it will take four to six weeks.