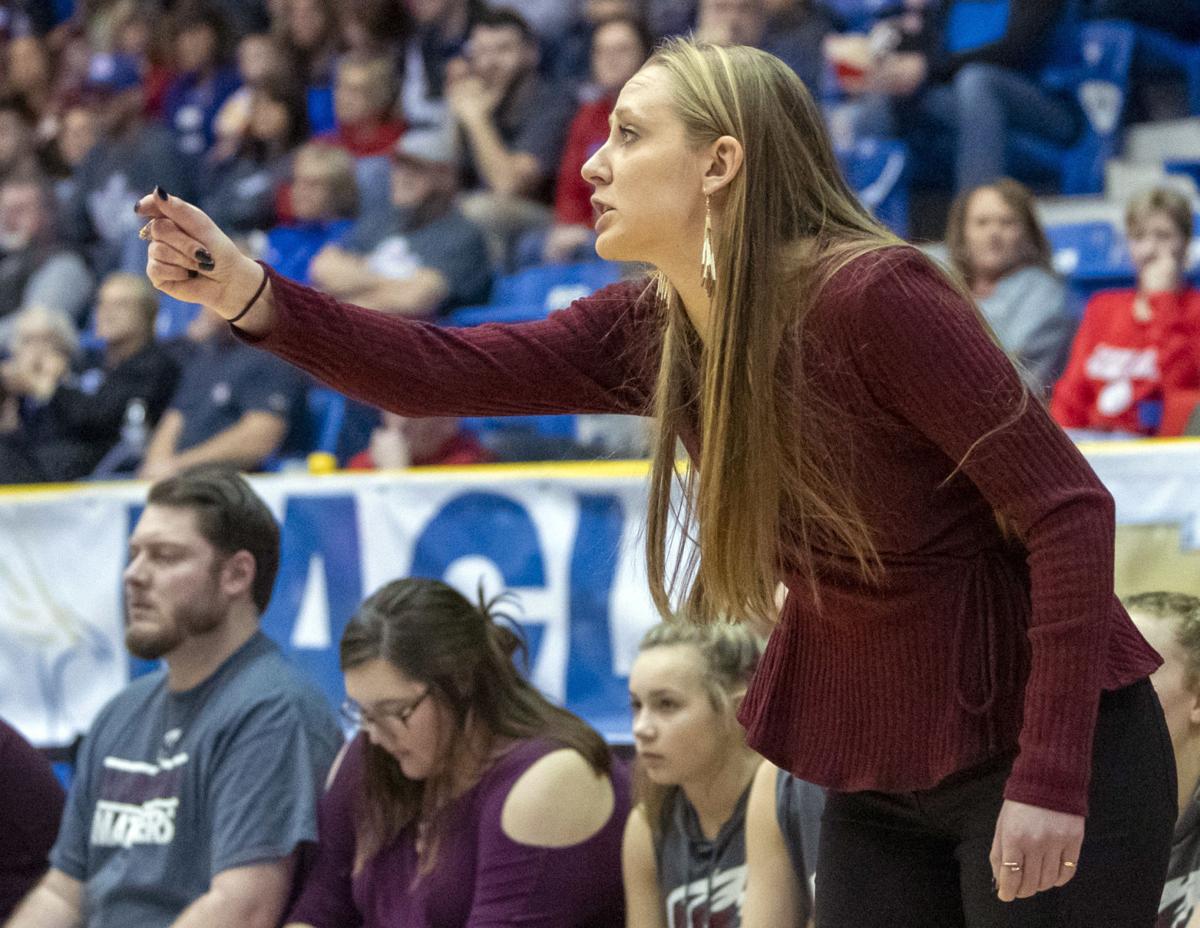 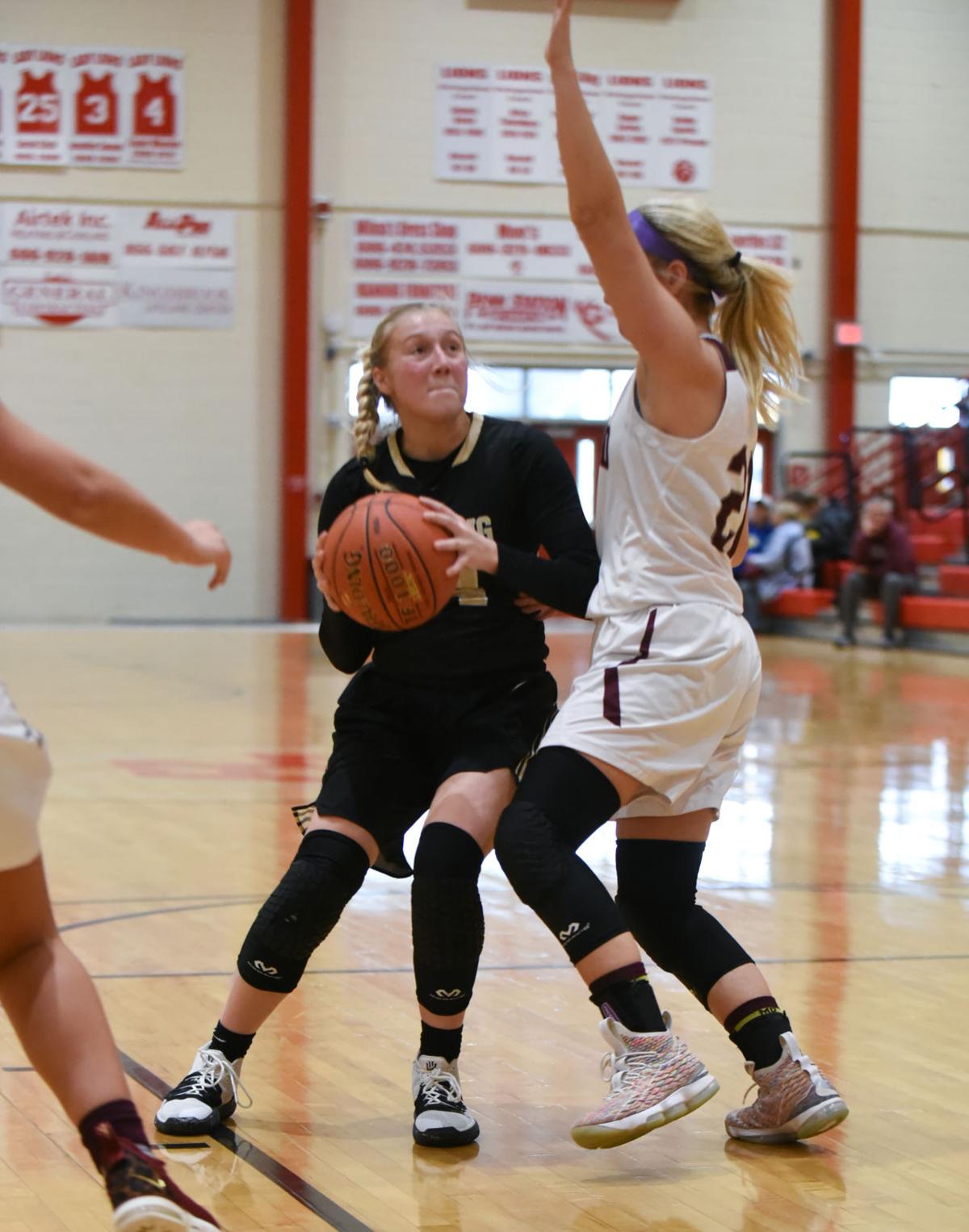 Fleming County's Sidney Argo attempts to put up a shot as Ashland's Julila Parker defends on Saturday during the 2019 Boyd County Roundball Classic. MARTY CONLEY/ FOR THE DAILY INDEPENDENT 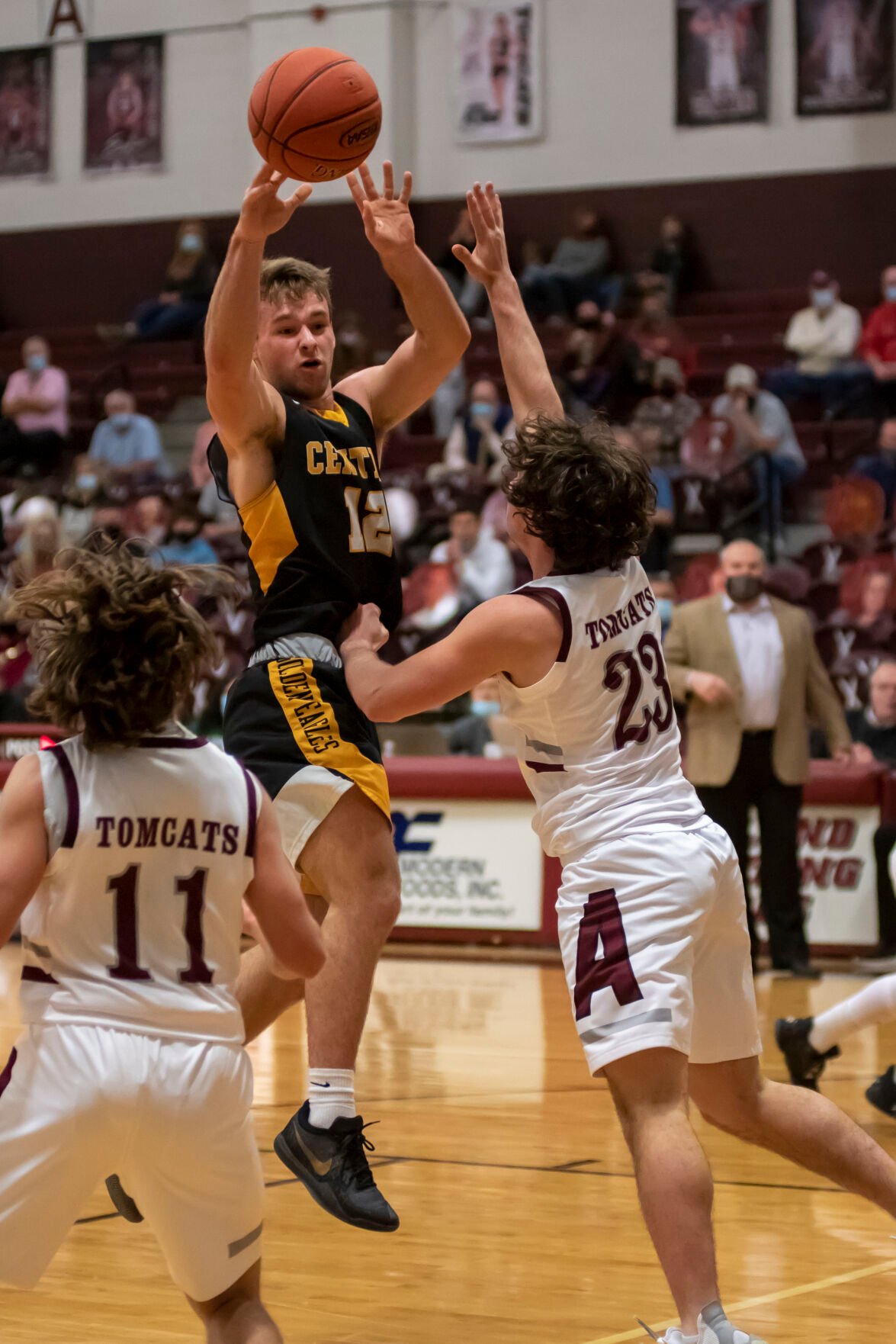 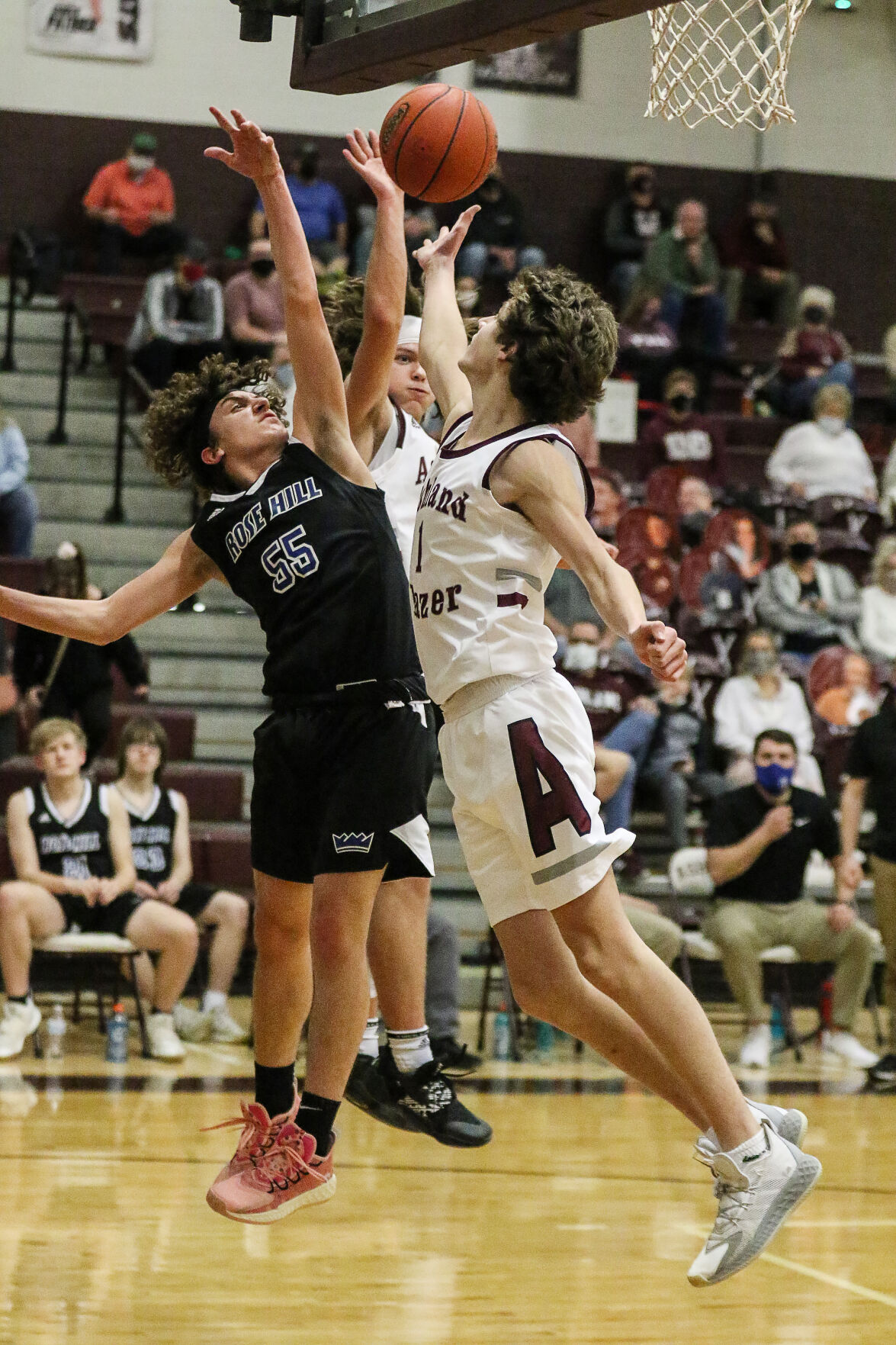 Ashland’s Zander Carter (1) and Colin Porter fight with Rose Hill’s Kaison Coleman for a rebound in the first half of Tuesday’s game.

Fleming County's Sidney Argo attempts to put up a shot as Ashland's Julila Parker defends on Saturday during the 2019 Boyd County Roundball Classic. MARTY CONLEY/ FOR THE DAILY INDEPENDENT

Ashland’s Zander Carter (1) and Colin Porter fight with Rose Hill’s Kaison Coleman for a rebound in the first half of Tuesday’s game.

Not to mention, potentially both in a span of about 48 hours.

The Lady Comets won the 16th Region All “A” Classic girls final — finally — over Raceland late Sunday afternoon. Road conditions and coronavirus permitting, West Carter will meet Presentation in the first round of the small-school state tournament as early as Tuesday in Richmond.

It wasn’t originally drawn up that way. The Lady Comets beat Menifee County in the region All “A” semifinals on Jan. 15 and the Lady Rams topped Rose Hill Christian in that round on Jan. 12 — about a month before Sunday’s climax.

The tournament’s completion was pushed back multiple times due to the so-called “new normal” (COVID-19), and again for a once-in-a-generation tragedy — the death of West Carter alumnus Ben Jordan.

Compared to those, a simple weather-related postponement from Saturday to Sunday felt almost, well, normal.

The 16th Region champion was scheduled to play at 11 a.m. this morning, but the beginning of the state event was pushed back Sunday to Tuesday afternoon due to forecasted inclement weather. A new schedule had not been released as of press time Sunday.

The litany of scheduling changes created what All “A” participants often tout as the event’s best benefit: a true tournament feel, a dry run at a win-or-go-home setting before the one in about a month that has the power to either end or extend seasons.

“It’s gonna be a little bit difficult,” West Carter coach Faith Conn said of the speedy shift in focus, “but at the same time, these girls have not played enough, so they are excited for any games. I think their intensity and their focus will be there with that quick turnaround still.”

• Ashland’s 81-59 boys victory over Boyd County on Sunday afternoon ties for the Tomcats’ biggest margin of victory in what has been an ultra-competitive series in a decade. Ashland last beat the Lions by more than 22 points on Jan. 21, 2011, 88-54 — 34 meetings ago.

Russell led No. 1 Anderson County by 10 points at halftime on Saturday night in Marvin Meredith Gymnasium and was still up on the Lady Bearcats until midway through the fourth quarter before the Lady Devils lost, 48-45.

That came on the heels of another competitive Russell performance against then-No. 6 Butler a week earlier.

Will that, coupled with Boyd County’s conquest of then-No. 2 Bethlehem on Jan. 30, signal to top-flight teams to stay away from northeastern Kentucky?

Mandy Layne thinks it’ll have the opposite effect.

“I feel like it’s starting to really give our program credit, that teams will drive two and a half hours having faith that we’re gonna give them a good game,” Russell’s coach said. “This game should help us in the future because people realize, ‘Hey, they really can compete with anybody in the state,’ and would be more likely to come again.”

The Lady Devils viewed Saturday as an opportunity to pick up the same commonwealth-wide cachet that the Lady Lions — ranked third in the state in last week’s Associated Press poll — have.

“I think it’s another step to show people around the state,” Layne said. “To be honest, I do feel like that we do get overshadowed a little bit by Boyd, and I know that they really have been representing the region, but I think we’re continuing to get better and also want to be known as one of the better teams in the state.”

• Bill Bradley felt Ashland’s girls could compete in the region picture, especially once the Kittens got all their pieces back. That point is nearly here.

Mikayla Martin, who tore her ACL last summer, dressed and warmed up for Ashland’s girls on Tuesday night, though she did not play in the Kittens’ 68-61 victory at West Carter. Bradley expects Martin back in the lineup around the end of the week, he said.

Regarded as one of the region’s top post players, Martin averaged 12.1 points and 9.5 rebounds per game last season.

The Redwomen only dressed six players, and three of them fouled out. So Rock Hill finished with three players on the floor at Charles Stewart Gymnasium in a 60-57 Lady Royals victory in a game that featured 41 personal fouls.

Two Rose Hill players fouled out, too. The Lady Royals can afford that now in a way they couldn’t earlier — their roster numbers seven after a low-water mark of five available players at one point in January.

• Rowan County boys coach Shawn Thacker missed the Vikings’ 59-41 victory over Elliott County on Monday night in quarantine. It was the first game Thacker hadn’t attended, he said, since 2002, when he was at Somerset.

Thacker missed four Briar Jumpers games that January because his mother-in-law had been diagnosed with cancer and Thacker took his sons to see her in Australia.

Thacker also got thrown out of the 2000 12th Region All “A” Classic final, a Somerset loss to Harrodsburg, in his first season as a head coach and had to miss a game after that.

As for Monday, Thacker didn’t even get to watch the game live. He listened on WMOR-FM because the signal on the NFHS Network kept cutting in and out, he said. Vikings assistant Andrew Zaheri ran the Rowan County bench in Thacker’s stead.

• Elliott County’s boys don’t seem complete unless they have twins. So it only makes sense freshman guards Eli Griffith and Gatlin Griffith are making the Lions a more complete team.

Rowan County went to great effort to take away Elliott County’s Bryson Dickerson and Hunter Lyons, coach Greg Adkins said, in their meeting on Monday night. So the Griffiths combined to can five 3-pointers as the Lions hung close to the expected region-contending Vikings for most of three quarters in a low-scoring affair.

The twins combined for 3.0 points per game last season, each playing in all 22 outings despite their stature as eighth-graders. This year, Gatlin Griffith is pitching in 10.0 points per game and Eli chips in 6.1.

“They’ve really come along,” Adkins said. “They’re playing a huge role in what we’re trying to do, and certainly the direction we’re gonna be going.”

Rose Hill knocked off Portsmouth Notre Dame, 81-75, in overtime on Monday and topped Menifee County, 67-63, the next night. That bookended a string started with a victory over Pike County Central on Feb. 2.

• Johnson Central senior guard Cory VanHoose set the Golden Eagles’ career record for consecutive free throws made by draining his 27th in a row against Paintsville on Tuesday night.

The previous record-holder was Brett Butcher, who hit 26 straight charity tosses in 1998-99. Butcher is now a Johnson Central assistant coach.

• Fleming County senior Sidney Argo is nearing not only the Lady Panthers’ career scoring record, but that of all Fleming County basketball programs.

Argo owns 1,891 career points, according to The Ledger Independent. The Fleming County girls record, held by Tiffany Hornsby, is 1,904 points and the boys mark to beat is 2,005, owned by Troy Steward.

Kensley Feltner scored 30 for Lawrence County on Monday against Pikeville.