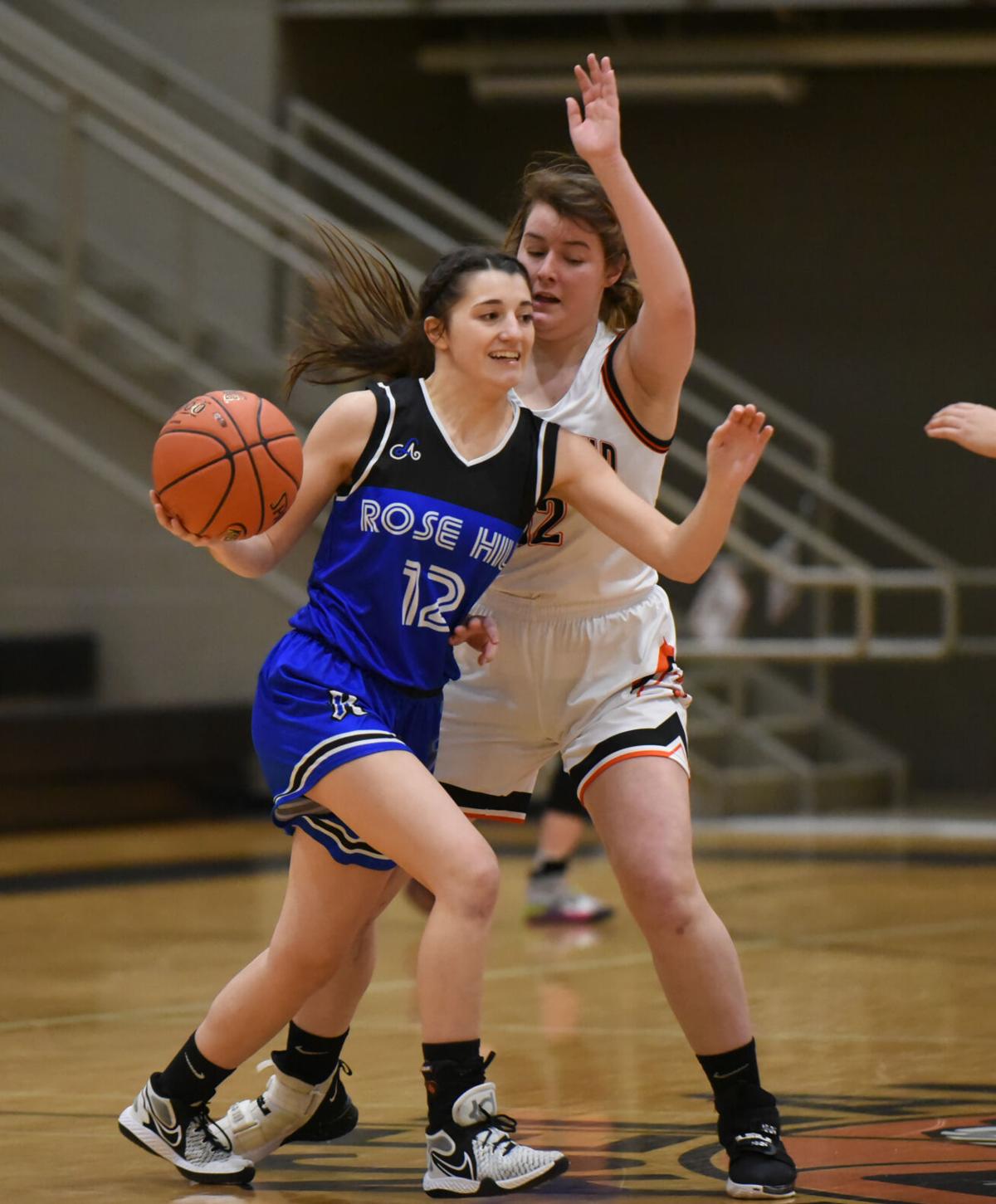 Jewelia VanKeuren of Rose Hill dribbles the ball as Raceland's Emma Picklesimer defends on Tuesday during the 16th Region All "A" Classic semi-finals at Raceland. MARTY CONLEY/ FOR THE DAILY INDEPENDENT 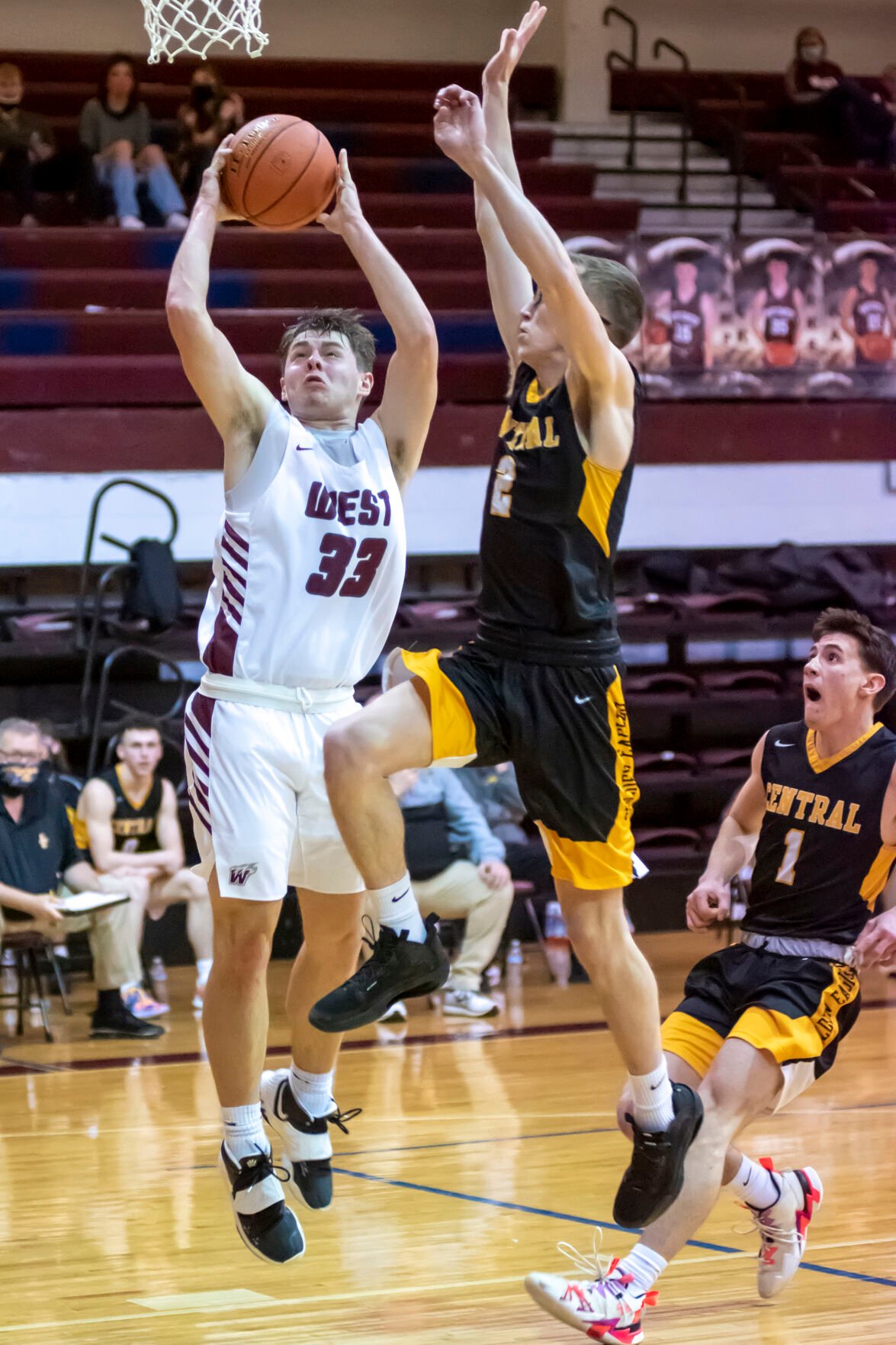 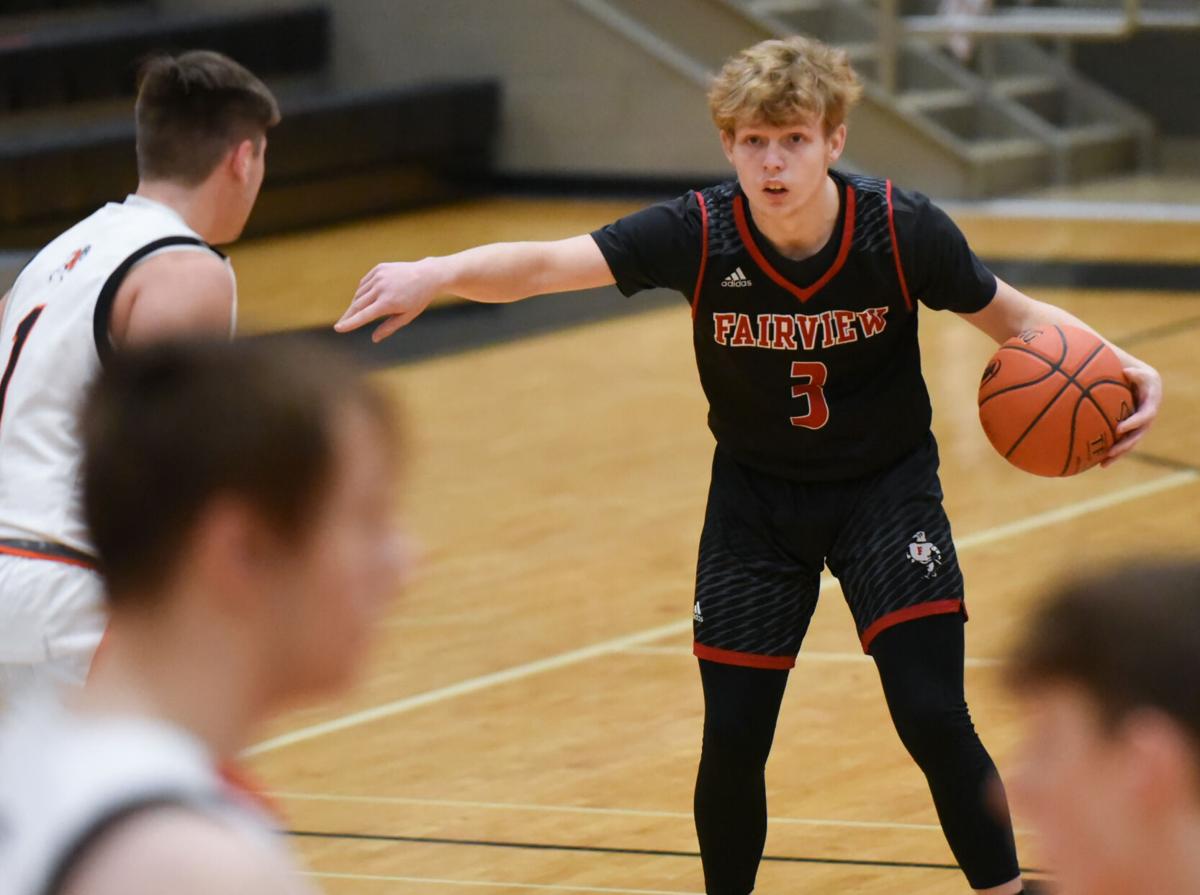 Jeremy Harper of Fairview sets up the offense against Raceland on Monday evening at Raceland. MARTY CONLEY/ FOR THE DAILY INDEPENDENT

Jewelia VanKeuren of Rose Hill dribbles the ball as Raceland's Emma Picklesimer defends on Tuesday during the 16th Region All "A" Classic semi-finals at Raceland. MARTY CONLEY/ FOR THE DAILY INDEPENDENT

Jeremy Harper of Fairview sets up the offense against Raceland on Monday evening at Raceland. MARTY CONLEY/ FOR THE DAILY INDEPENDENT

Nick Karle presented scrapbooks to Rose Hill Christian’s girls on Jan. 6. Even coming off two winning seasons in the past three years, it was a step of faith for the first-year coach that the Lady Royals could fill them with positive memories.

Rose Hill stepped up its schedule to include the most 16th Region opponents it has faced in seven years, even with the season shortened by the pandemic. That includes a return to 64th District seeding and tournament play after a five-year absence.

And the Lady Royals did it with a thin rotation that for a week early in the year included only five players.

Karle’s gesture has paid off: the scrapbooks have been populated with coverage of nine wins and counting, which constitutes Rose Hill’s best start since 1999-2000.

But is it possible Rose Hill accomplished more in a loss to Ashland on Tuesday than in its string of victories?

The Kittens ultimately pulled away from the Lady Royals down the stretch to win, 59-38, at Charles Stewart Gymnasium, but that margin doesn’t indicate how competitive the game was. Rose Hill, which has 40 high school students, according to the KHSAA, was within a missed layup in the final seconds of the first half of leading region blueblood Ashland — at 895 students some 22 times Rose Hill’s size — at intermission. And the Lady Royals still hung within four points with less than 90 seconds to play in the third quarter.

In Kentucky, enrollment size doesn’t matter — every school is in the running for the same prizes. But Rose Hill made a statement to future opponents: overlook us at your own peril.

“The seven (players) I have left now believe we can compete with Ashland, being down by only one (point) at half and (10) at the end of the third,” Karle said, “and making Ashland have to press and not play us in a true half-court game.”

The most likely path through district seeding has the Lady Royals and Kittens on course to meet again in the district tournament elimination semifinals. If Rose Hill initially sought simply to get its feet wet again in postseason play, Karle hopes the Lady Royals will now dare to dream bigger.

“I want my girls to believe they can beat Ashland and I’m not sure they are there yet,” Karle said, “but I made our month of February schedule super hard to prepare for March 15, when we will see them again in the district semis.”

• Fairview’s boys redeemed a difficult start with attention-grabbing wins on back-to-back nights last week. The Eagles’ victories at Raceland, 62-53, on Monday and at home over Bath County, 58-57, in overtime on Tuesday were cause for celebration, and Roger Newton obliged.

Fairview’s first-year coach channeled his inner Stone Cold Steve Austin in the locker room after both wins, squeezing a couple of water bottles over his head and jumping repeatedly in celebration, to the delight of the Eagles.

“There were a couple waters sitting by my chair (at Raceland) and I reached down and grabbed them, and I was like, ‘Coach, get your video camera on, we’re gonna have a little fun,’” Newton said of Fairview assistant Jake Leibee. “It started there. I don’t know that I planned to do it (again Tuesday night), but the way we won the game, when it looked like we were dead in the water, just made it like, hey, we gotta do it again.”

• Jay Fite was on the business end of a celebration instead of facilitating one on Saturday night.

Lewis County’s girls topped Greenup County to earn the Lady Lions’ 200th victory under Fite. Then they ambushed the coach with silly string in the locker room.

“I was totally surprised,” Fite said. “I had the mask on, so I was blinded and couldn’t breathe at the same time.”

As a Comet, Jordan wore 3, which was already taken on this year’s team by Jackson Bond. So Webb traded his maroon and white 4 for 33, which Jordan sported on Kentucky’s basketball team last winter.

Webb missed playing with Jordan in Olive Hill by one season — he was in eighth grade when Jordan, a senior, helped lead the Comets to the 16th Region Tournament final in 2017. But Webb got chances to play with Jordan when he came home from Lexington, Comets coach Jeremy Webb said. And Bond and Tyson Webb date Jordan’s youngest two sisters, Jeremy Webb said, so they interacted with Jordan in that setting — boosting their desire to honor Jordan, who died Jan. 11 at age 22.

Webb has put up 22, 15 and 16 points in his first three games wearing the new digits. The middle game of that trio was West Carter’s 62-61 victory over Raceland in the 16th Region All “A” Classic final on Friday night.

Rose Hill edged the Hawks, 75-74, in Charles Stewart Gymnasium for their first win after dropping its first 11 outings.

“They’ve known they can do it; so many times, it’s just like, ‘Why has it not come together yet? Why has it not come together yet?’” Bush said of the Royals. “For them to finally reap the rewards of the work that they’ve bene putting in since June, seeing that on their face was one of my favorite things as a coach, just to see them enjoy that, relishing that victory.”

The Royals are learning to embrace their roles, Bush said. He pointed to Luke Larsen’s offensive aggressiveness as an example. Larsen, who attended Rose Hill in middle school, went to Grace Christian (West Virginia) as a freshman and is back on Winslow Road as a sophomore, earned 16 free throws against Pike County Central. He had attempted 11 charity tosses in nine games before that.

“My kids are learning the value of fighting,” Miller said. “They have turned a page in the playing hard category. Also, we’re starting to understand how to play faster. We’re really trying to teach pressure and it’s much better.”

• Greenup County’s boys collected about 250 units of food — a combination of canned vegetables and fruit and dry pinto beans — for Greenup Meals on Wheels on Saturday, reported David Gibson, the father of Musketeers junior Boone Gibson.

The Musketeers touted Saturday night’s game against Raceland as the inaugural “Give Back Classic.”

That ended the Lady Comets’ 22-game win streak against 62nd District opponents. The Lady Cougars snapped an 11-game skid against West Carter dating to 2016 and picked up their sixth victory against district opposition in their last 33 tries.

“Beating West Carter was a really great win for us,” Morgan County coach Derrik Young said. “They’ve been considered the best team in our district for many years. I really hope to use this win as a stepping stone to give our girls confidence and help them realize that they can compete with good teams on any given night.”

• The Second Gentleman of Kentucky was in Westwood on Saturday afternoon.

O’Bryan assisted Eagles coach Roger Newton at East Jessamine from 1997-2000. He got the best of his former boss as the Panthers beat Fairview, 82-43.

Coleman, who herself was an accomplished girls coach at Burgin, East Jessamine and Nelson County before joining Gov. Andy Beshear’s ticket, wasn’t in attendance. She watched from home on a YouTube livestream, Newton said.

• Carolyn Anderson Beimdiek — the daughter of James A. Anderson Jr., the namesake of Ashland’s gym who led the Tomcats to the 1928 national title — died Jan. 24 at age 89 in St. Louis after fighting Parkinson’s disease.

Beimdiek, a 1948 Ashland alumna, took pride in the scholarship that bears her father’s name, said her daughter (and Anderson’s granddaughter), Karen Beimdiek Baratz. Beimdiek had hoped to visit Ashland to share that passion with its students, but was never able to do so, Baratz said.

However, the James A. Anderson Jr. Scholar Athlete Award lives on — a scholarship awarded annually to a college-bound senior. Beimdiek and her nephew, Fred “Rick” Anderson, worked to create and fund that award.

Baratz invited friends of the family and of Ashland to honor her late mother by donating to the James A. Anderson Jr. Scholar Athlete Award, c/o Foundation for the Tri-State, P.O. Box 2096, Ashland, KY 41005-2096.

• Ashland junior Cole Villers reached the 1,000 career point mark on Friday. He scored 26 points in the Tomcats’ 76-58 defeat of Russell.

Also worth mentioning — Savannah Wheeler, a frequent flier in this category while playing at Boyd County, cracked 30 for the first time as a collegian on Saturday. Wheeler pitched in a career-high 35 points in Marshall’s overtime victory over Old Dominion.