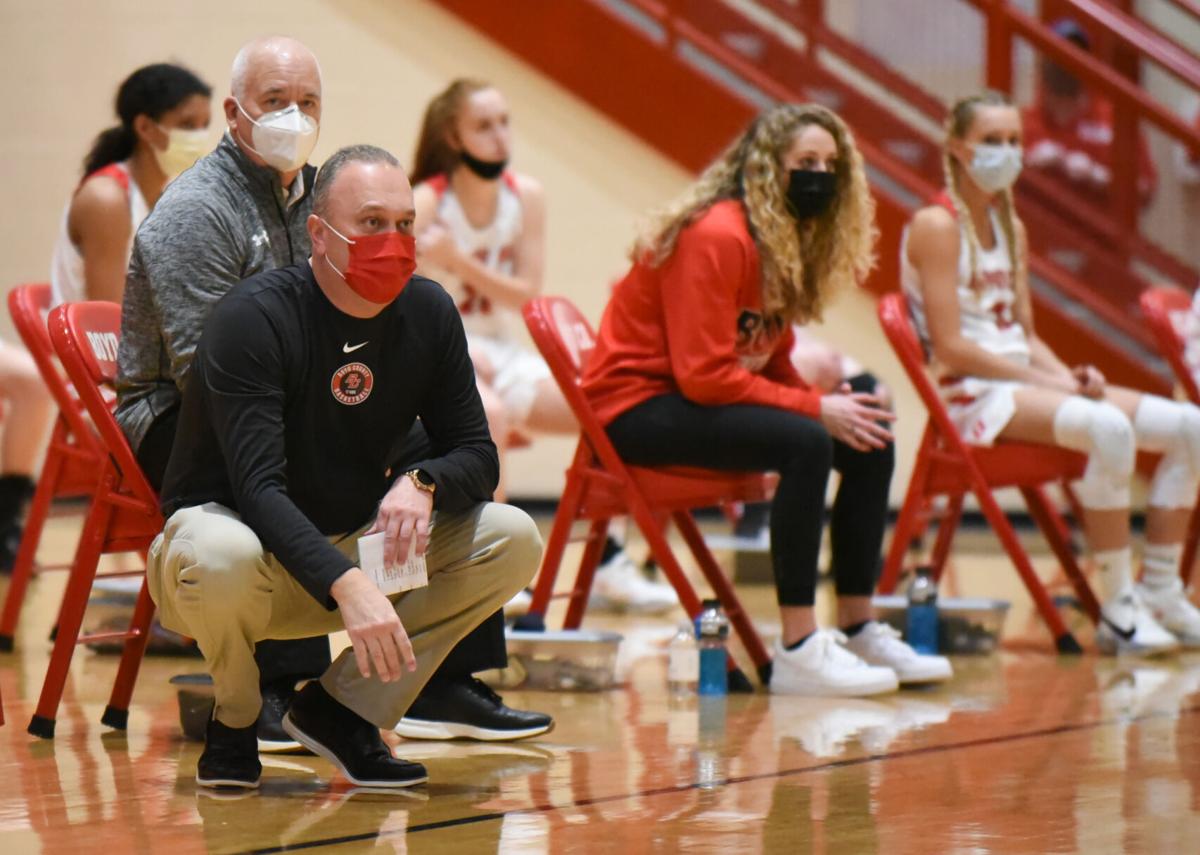 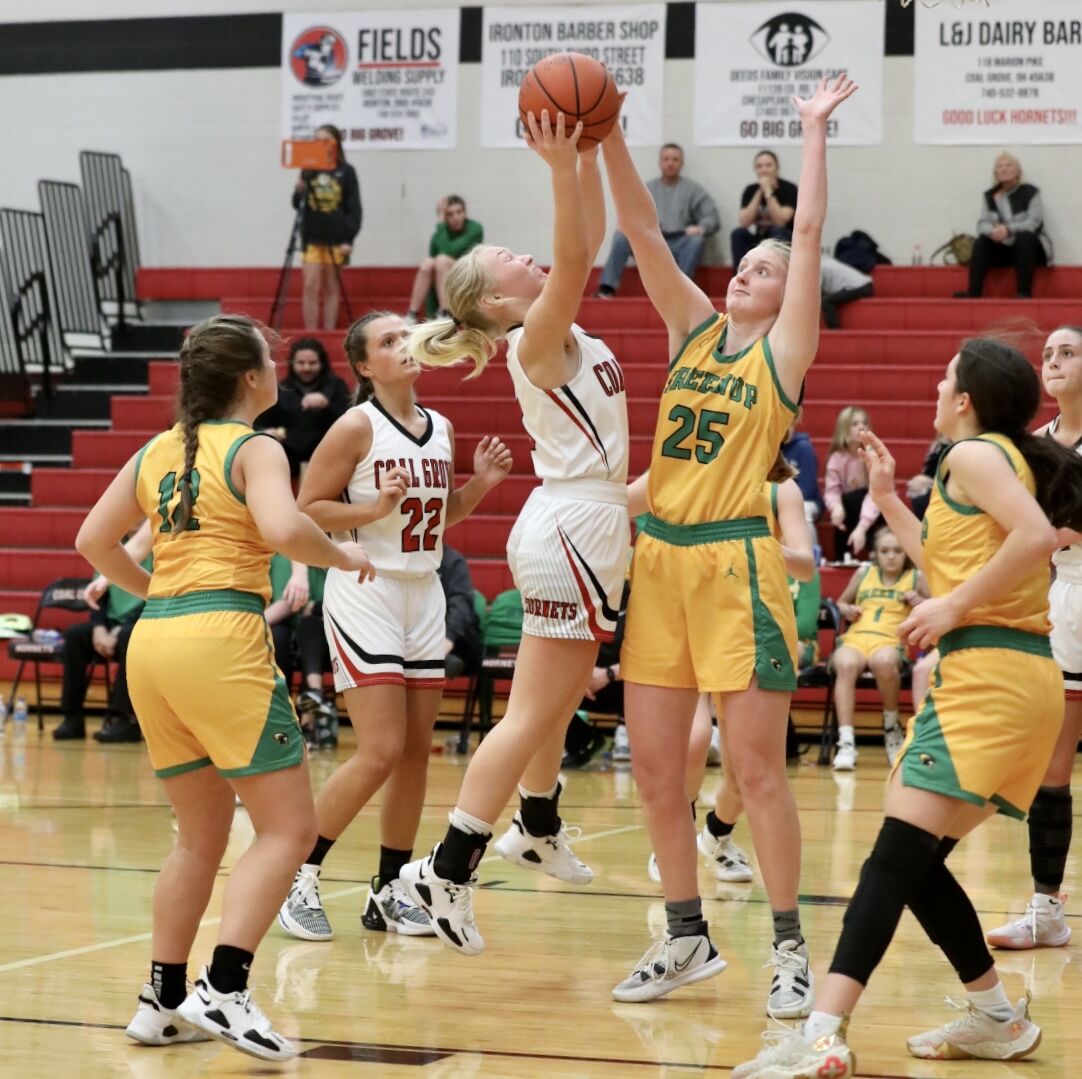 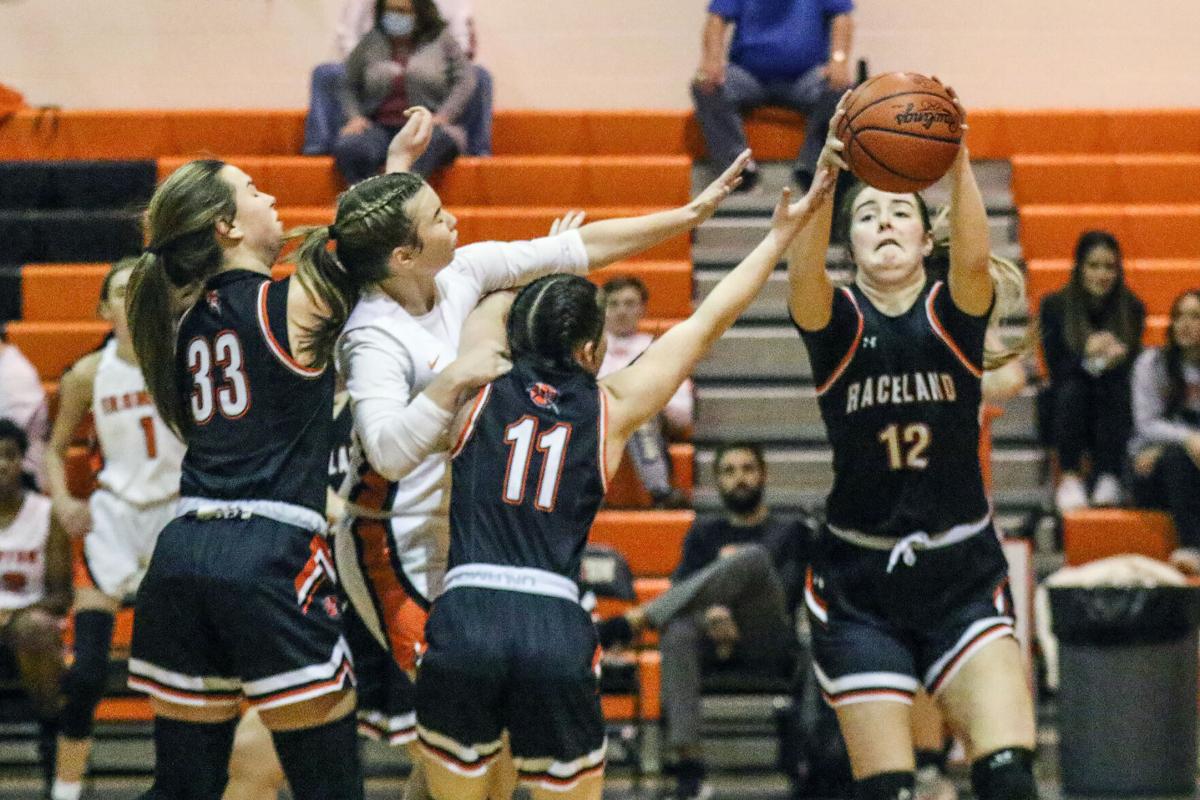 Pete Fraley, in keeping with his preference not to say much about individual distinction, professed to not have thought much about either the milestone he just hit or the next couple in line.

Boyd County collected its 500th girls basketball win on Fraley’s watch on Wednesday night, and No. 501 one night later. That leaves Fraley 13 victories away from tying the late legendary John “Hop” Brown for the most girls coaching wins in the 16th Region, and 10 back of Hager Easterling for second on that list.

“If it wasn’t for (statistician extraordinaire) Curtis (Crye), I probably wouldn’t know how many wins and losses we have,” Fraley said. “That’s the furthest thing from my mind right now.”

He is more concerned with the Lions’ ongoing refashioning to rank among the region’s top contenders. That’s nothing new, but Boyd County had a longer route there than usual in the preseason because the Lions don’t boast the upperclassman superstar they’ve had for a decade — or, for that matter, more than one upperclassman, period.

Boyd County emerged from its typically tough pre-New Year’s schedule 7-3, though. And if that path hasn’t been perfectly smooth, Fraley hasn’t minded the occasional bump.

“Where they’re so young, we just have to keep building and building toward our goal,” Fraley said. “It’s a good start. I’ve got a hungry bunch of kids, a good bunch of kids that play extremely hard for me. You got that part going, that’s half the battle right there.”

One example was Wednesday, the night of Fraley’s 500th win. The Lions led Capital (West Virginia), 40-29, at halftime. The Cougars got the margin down to seven after three quarters and outscored Boyd County 15-9 in the fourth quarter. And the Lions were 6 for 16 from the foul line.

Fraley’s postgame address touched on the themes of game management down the stretch and understanding how to handle various time-and-situation models, he said.

That conversation, of course, was more pleasant because Boyd County had held off Capital, 66-65.

“It’s good to win close games like this because you can learn from a loss, but it’s a lot more fun to get a win,” Fraley said.

The Lions have done that much more often than the alternative in Fraley’s 26 seasons and appear poised to continue doing so this year. If that also means Fraley will keep climbing the region’s all-time wins list, even if that isn’t his specific stated goal, so be it.

• Ashland’s boys won the Ashland Invitational Tournament on Thursday night for the third time in their last four tries, which the host school hadn’t done since three-peating from 1995-97.

And, Tomcats coach Jason Mays hopes, it could be a turning point for a team with sky-high expectations that stubbed its toe in the first two high-level events it played in this season, the Marshall County Hoopfest and the King of the Bluegrass.

Ashland’s AIT performance under Mays, after all, has had that effect before.

“The AIT has been so good to us,” Mays said. “If you remember my first year (2018-19), we (were) 3-6, then we lost the first game of the AIT, but had two really good wins in Game 2 and Game 3 that sort of corrected our path going into the second semester. Then two years ago, we had great wins against Warren Central and Butler that gave us confidence going the rest of the way in that undefeated season.

“The AIT, since I’ve been here, has been like a warm blanket for us. It gives us confidence and it’s been a huge part of our program.”

• Cole Villers’s ongoing saga of trying to get on the floor and stay there is nothing new. As a freshman, he rehabbed fanatically after tearing his ACL in summer ball to return in early February and was a difference-maker in Ashland’s 2019 region championship run.

Villers competed through injury last winter as well, and his senior season has been no different. He played in the Tomcats’ first two games before being lifted early from the third and missing the next three outings after that.

Villers returned for the first two games of the King of the Bluegrass in Louisville but headed for the bench again for Ashland’s next four contests, with knee surgery on the docket.

But Villers got clearance to retake the floor for the AIT final on Thursday night against Elder. He isn’t exactly “all gas, no brakes,” to borrow a phrase popularized in the sports world by Texas football coach Steve Sarkisian, but he scored eight points against the Panthers and has a path forward to continue contributing, Tomcats coach Jason Mays said.

“We have to manage Cole’s load,” Mays said. “Cole has to change his definition of his role, and it’ll increase over time, but it’s not gonna happen overnight.”

• More than a few AIT participating coaches praised the atmosphere and feel of the 66th annual tournament. One saw fit to specifically demonstrate that collegial nature.

Lincoln County coach Jeff Jackson paused near the Ashland locker room to do a postgame interview after the Patriots won the AIT third-place game Thursday night and before the Tomcats took the floor for the final. He did a double-take when he saw Cole Villers, previously thought to be out for a significant stretch with injury, in uniform and inquired if that meant Villers’s doctor’s visit earlier that day had gone well.

Villers filled him in, and Jackson patted Villers and said, “Have a heck of a year. Good luck to you guys.”

At that point, Raceland’s girls coach felt perseverance more than anything else. One participating school had to field two teams and the host Rams sat out a game due to COVID-19, but the tournament got across the finish line with everyone having three games — or at least three results — to show for it.

Keeton found himself scrambling on the tournament’s eve when Ludlow withdrew for coronavirus-related reasons. Feeling a responsibility to make sure the other six participating schools could get three games in, Keeton emailed and texted everyone he could think of, but finding a team that wasn’t already committed to another holiday tournament, wasn’t in COVID-19 protocol, didn’t have its full allotment of games scheduled and was able to drop everything and travel to Raceland for three days (or three times in three days) with less than 20 hours’ notice before the tournament tipped off proved impossible.

The solution: Heritage (Tennessee) coach Rick Howard agreed to field two teams. The Mountaineers’ second group, coached by assistant Karly Stache, even won a game against East Carter and was competitive in the opener against Raceland.

That wasn’t the last curveball. Raceland was on the floor warming up to meet Floyd Central in Tuesday’s semifinals when Keeton’s phone rang.

He typically wouldn’t have even had his phone on him that close to a game, Keeton said, but given the circumstances, he answered. Rams assistant coach Marty Thomas had tested positive for COVID-19, and though Thomas was asymptomatic and remained that way as of Saturday evening, Keeton knew the game could not go on.

“It was like the state tournament or conference tournaments in the NCAA in 2020,” Keeton said. “If you didn’t have compassion before for those teams that had those major events pulled from under their feet, you should now.”

Ultimately, the tournament concluded with every scheduled game completed except for the Rams-Jaguars semifinal.

“Each coach and team were incredible to us,” Keeton said. “They were all willing to adjust and shuffle to help us get to the completion of the tournament. And while it had a different look or feel, we still got everyone three games across three days without too much disruption to those teams’ games and times. Major props to those teams/coaches participating and our parents and staff to put on a quality, top-shelf event that hopefully everyone enjoyed.”

• On Tuesday night, Marty Thomas was to have been feted with the Distinguished Tomcat Award on the opening night of the AIT.

That passes for being the center of attention in the northeastern Kentucky sporting world — midcourt at Anderson Gym on one of the can’t-miss dates of the sporting calendar.

Thomas ultimately couldn’t attend, having earlier in the day tested positive for COVID-19, but he didn’t know that a night earlier.

On Monday night, Thomas lingered in Raceland’s gym after the Rams girls’ win in the opening round of the Ohio River Classic. The Raceland assistant wasn’t practicing his smile and wave — he’d stayed to clean out a crock pot that had contained taco meat in the hospitality room and set out trash cans in front of the bleachers.

Doing the dirty jobs with no fanfare, of course, isn’t atypical for high school coaches, but the image of Ashland’s all-time leading boys scorer doing them a night before receiving a major award was striking.

“Nobody will outwork him,” Raceland coach Ron Keeton said of Thomas. “Dude goes 100 miles an hour all the time.”

• Bath County’s boys improved to 12-1 with a 73-41 victory over Ryle on Thursday night. That helped the Wildcats continue what coach Bart Williams said is their best start ever, but was perhaps more eye-catching because it was against a Raiders team that is 8-5 in the perennially stout Ninth Region and was averaging 75.7 points per game coming into the Dan Swartz Classic final.

The Wildcats won three tournaments in the first month of the season. Bath County claimed the Eastern Kentucky Conference Tournament title and its bracket in the Smoky Mountain Christmas Classic in Gatlinburg, Tennessee, before winning its home event last week.

• Greenup County’s girls went to Charleston, South Carolina and brought both a tournament title and a five-game winning streak home from the Palmetto State.

The Musketeers won the Carolina Invitational’s Battery Division by defeating a trio of South Carolina opponents by an average of 31.3 points per game.

Greenup County, at 9-2, is one win from tying its output all of last season.

• Ashland guard Colin Porter garnered AIT Most Valuable Player honors last week. In doing so, he joined his brother, Chase Porter, in that club. Chase was the 2015 AIT MVP suiting up for Elliott County.

The Porters are the second set of brothers to claim AIT MVP recognition. Ashland’s Chase Villers did it in 2017 and younger brother Cole followed suit two years later.

• East Carter, consistently one of the top girls programs in the 16th Region, sits 1-8 entering 2022.

It happens to everyone, and it’s the Raiders’ turn to rebuild. Jeff Damron remains committed to that process and has his team looking for positivity in the interest of building momentum.

“We’re setting goals — each practice, each drill and each game,” East Carter’s coach said. “We’re gonna take our lumps, and I understand that. We don’t like losing, don’t want to accept losing, but you are who you are. Right now, a lot of times, when we play our best ball, it’s not gonna equal a win and we have to be OK with that.”

An example of finding a silver lining in a tough stretch: Damron liked how East Carter handled Floyd Central’s pressure early in their Ohio River Classic first-round game on Monday, he said. He also saw value in the Raiders getting a look at the Jaguars’ adjustment to a pressure package he anticipates West Carter will use against East Carter tonight.