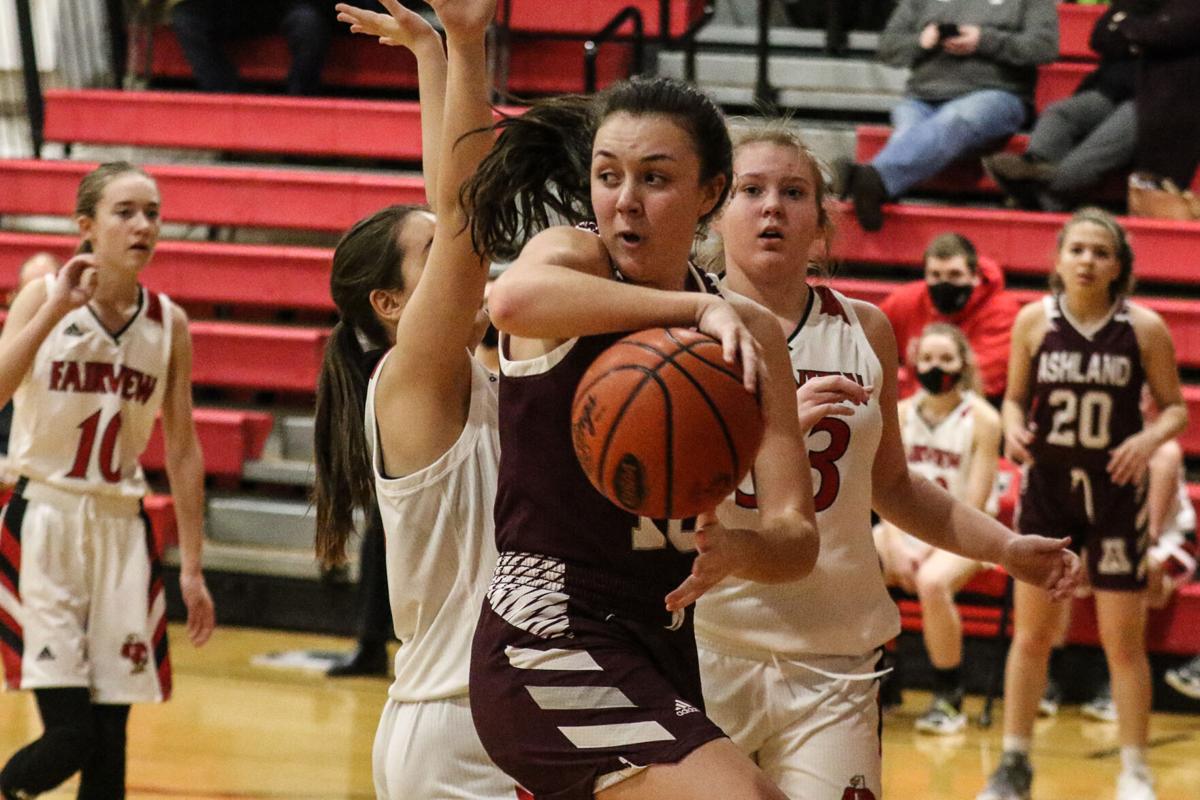 Ashland’s Carley Cullop kicks the ball to teammate Casey Wallenfelsz open on the wing from a three pointer during the second quarter of Friday’s win over Fairview. 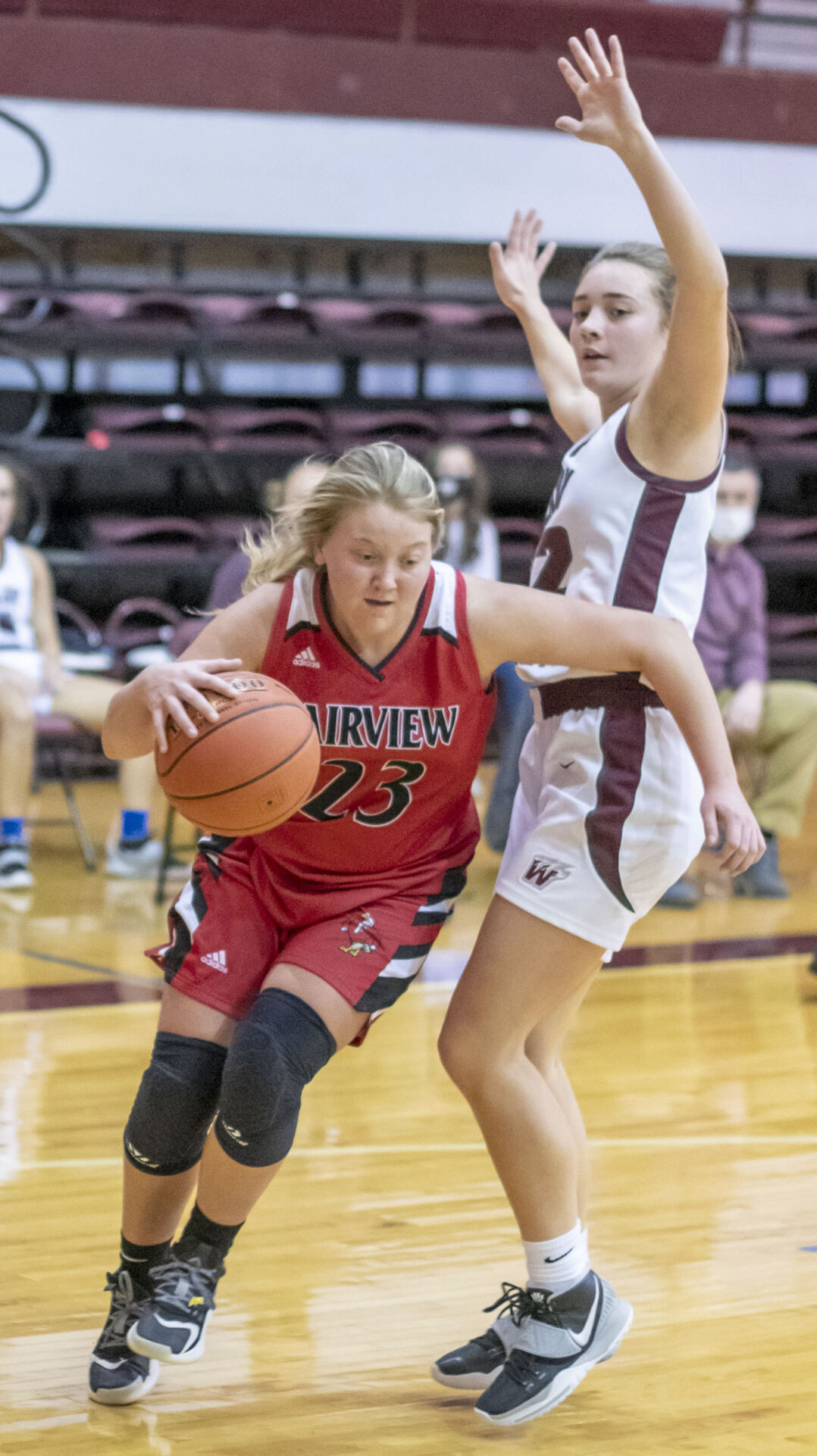 Fairview’s Josey Nelson drives into the West Carter defense Saturday, January 9, 2021, during the 16th Region All "A" Classic in Olive Hill, Ky. Photo by John Flavell / For The Daily Independent 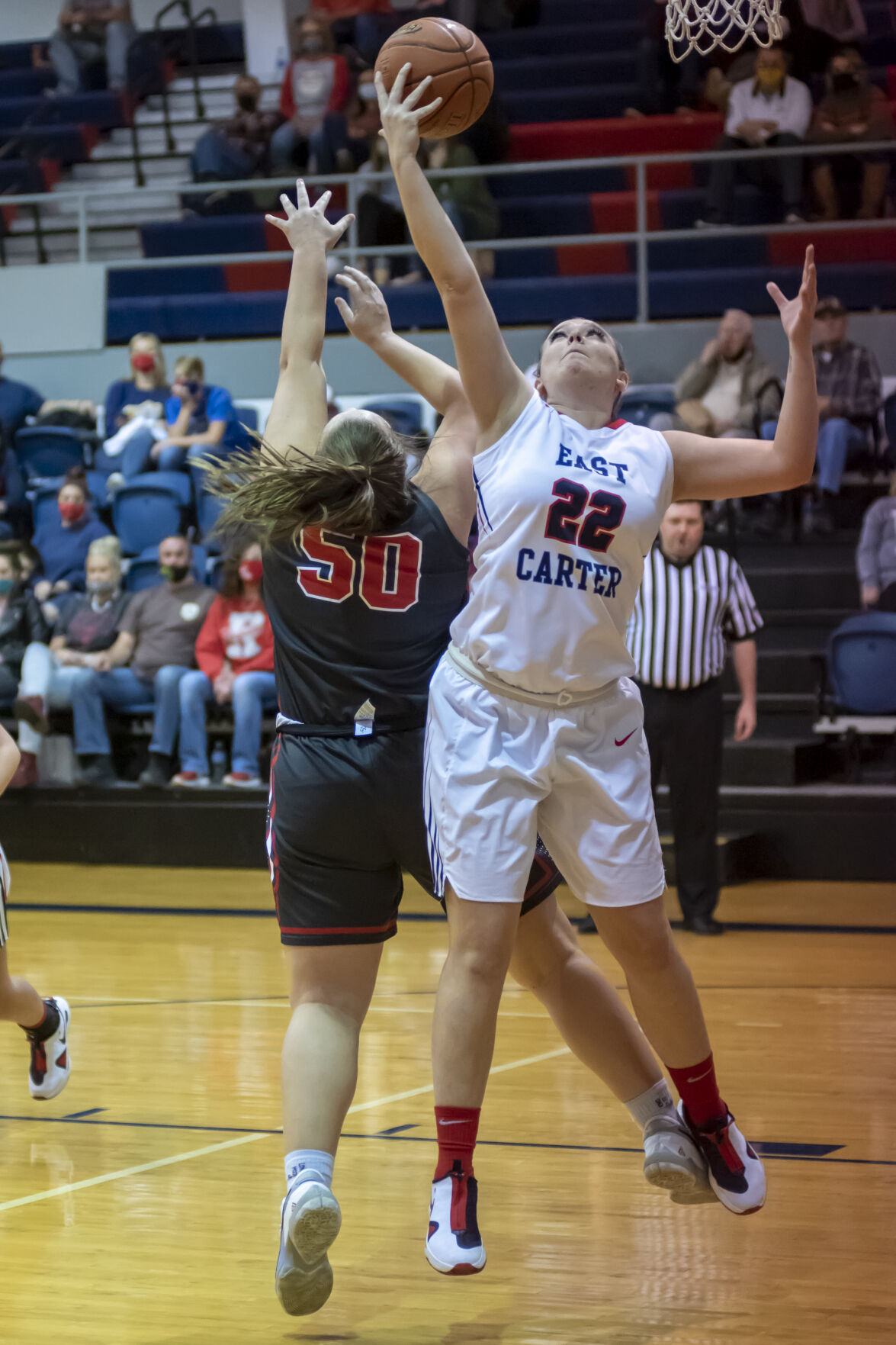 Ashland’s Carley Cullop kicks the ball to teammate Casey Wallenfelsz open on the wing from a three pointer during the second quarter of Friday’s win over Fairview.

Fairview’s Josey Nelson drives into the West Carter defense Saturday, January 9, 2021, during the 16th Region All "A" Classic in Olive Hill, Ky. Photo by John Flavell / For The Daily Independent

It’s not uncommon to hear sports media (or society at large) use the word “courageous” when “audacious” would probably be a better fit.

Ashland took an early 12-point lead on Russell’s home floor, but the Lady Devils got back within two late in the first half, and they were content to let Cullop first hold the ball a step or so shy of the volleyball line — and then let fly with a deep 3-pointer.

“I knew we needed a bucket, and I hit a 3 like that in our game (last week) against Notre Dame, so I was confident in it,” the Kittens’ senior swing player said. “(The Russell defender) didn’t step up and guard me, so I pulled it.”

And drained it. If the shot seemed improbable simply because of its distance, its conversion was critical to Ashland’s effort to regain momentum in an eventual 59-51 defeat of the defending 16th Region Tournament champions.

Ashland coach Bill Bradley has come to expect plays like that from Cullop — the only Kitten back from last year’s regular rotation, at least until Mikayla Martin returns from a torn ACL.

“That’s happened two or three games now, when we really needed a big bucket or a steal or an assist,” Bradley said. “(Cullop) has come through for us. It’s her leadership.

“I looked for a leader at the beginning of the year, and she really stepped up. Her sister (Sydney) was a great captain, and she’s following in her footsteps.”

Here’s where the “courageous” comes in: Cullop had buried her grandmother, the late Karen Baker, earlier Wednesday.

“It was definitely tough, but I was playing for her,” Cullop said, choking back her emotion. “I just wanted to make her happy, and I feel like I did.”

Bradley had offered Cullop the night off, he said. She didn’t take it, and she played a critical role in the Kittens’ victory.

“I told her I loved her and that kinda stuff,” Bradley said. “All things considered, she was just an unbelievable leader. She’s been that way all year, our best leader, and it showed again tonight.”

• Credit Boyd County’s girls with the most impressive victory by a northeastern Kentucky team so far this year. The Lady Lions, ranked ninth in the Associated Press poll, rallied from double digits down to knock off No. 2 Bethlehem, 66-65, on Saturday afternoon.

Boyd County (as have other top-tier 16th Region teams) has long played a representative schedule on the state and Tri-State level. That’s more important than usual this season, coach Pete Fraley said, as the Lady Lions are learning to play with new players in (Laney Whitmore and Hannah Roberts, transfers from Huntington St. Joe) as well as four contributors from last year gone due to graduation, transfer or simply not returning.

The Lady Lions’ slate, for now, also includes showcases at Butler, Bullitt East and Prestonsburg as well as a game at Danville.

• Mandy Layne figured, or at least hoped, Russell’s girls would have their full roster by now after four starters missed three games due to COVID-19 precautions. It hasn’t worked out that way: on Thursday, the day the Lady Devils expected to get everyone back, they learned they would lose to quarantine some of the players who stepped into that void last week.

Layne spoke for herself and her team Saturday, but one could imagine the echoes from any number of coaches who are operating a program in a pandemic.

“It’s no one’s fault. Can’t control the virus,” Layne said. “But it is still very, very, very frustrating. You almost feel just helpless. You just don’t know what to do to prevent it and there’s nothing you can do to prevent it, and you’re trying to get some flow.”

It’s not all bad for Russell, which had its projected starting five back against Wheelersburg on Saturday. The Lady Devils beat the previously 14-1 Lady Pirates, 68-52.

“It was really, really positive,” Layne said. “I was so happy with our kids’ effort. I thought our defensive intensity was outstanding, and the way that we executed offensively for the time that we had been out is just a credit to them.”

“That meant nothing to me,” Mullins said of the personal distinction. “They needed that win. They have been working too hard not to have a ‘W’ to show for it, so I felt so proud of them and they finally got to see what winning feels like.”

Kiera Loving and Josey Nelson posted double-doubles for the Lady Eagles. Loving recorded 15 points and 25 rebounds, and Nelson added 14 and 11.

The Lady Eagles continued trending upward with a 34-29 victory at Sciotoville Community (aka Portsmouth East) on Saturday afternoon. Loving and Nelson again authored double-doubles — Loving with 13 points and 16 boards, and Nelson 12 points and 11 rebounds — as Fairview came back from scoring only seven points in the first half to out-pointing the Lady Tartans 27-13 after intermission. Mia Newton chipped in nine points.

Mullins noted that even Fairview’s most recent two losses, to Sugar Creek Christian (Ohio) and Magoffin County, were by a total of four points.

“We are improving and I am extremely proud of them considering our youth and inexperience,” Mullins said. “We still have a lot to work on, but as long as they keep battling and playing with their hearts and their skill levels catch up with that, we’ll be fine, trust me on that.”

• Boyd County and Pikeville’s girls, brand-name opponents from neighboring regions, hadn’t played since 2007 coming into the season. Then they met twice in a span of four days.

The Lady Lions needed an opponent in the Boyd County Roundball Classic on Jan. 23 and Pikeville obliged.

Then the Panthers and the Lady Lions each had a cancellation due to COVID-19 the following week — “Our schedule changes about every two hours,” Boyd County coach Pete Fraley cracked — so they agreed to play again in Pikeville on Tuesday.

The Lady Lions won both games, knocking off the back-to-back 15th Region champion Panthers 81-58 in Summit and 57-53 in Pikeville.

• Fairview’s boys had been on the short end of a pair of one-point quarters this season, against West Carter and Bluegrass United. The Eagles administered one defensively on Friday night, holding St. Patrick to one point in the fourth quarter of a 55-28 win in Maysville.

Fairview coach Roger Newton, in his first year in Westwood but an industry veteran, said with a laugh he didn’t recall any of his teams being part of three one-point quarters in the same year.

“I hope we’ve got them out of our system,” Newton said. “(Against the Saints) we played through not maybe having the best shooting night, but we focused on our defense and did a good job of keeping their best players out of the scoring column.”

• The 16th Region All “A” Classic boys final between Raceland and West Carter has been scheduled (for a third time) for Friday night in Olive Hill. The girls title game between the same schools was to be played Thursday night, but is postponed with the Lady Rams dealing with COVID-19-related issues.

• Ashland’s boys lost at Bowling Green, 83-57, on Saturday night in a matchup of top-10 teams scheduled two days before the Tomcats made the four-hour-or-so trip.

Despite the result, the Purples were complimentary of Ashland in media coverage after the game, which suggests perhaps the margin says more about No. 2 Bowling Green than it does the seventh-ranked Tomcats.

“We still have a lot of work to do,” Bowling Green guard Tanner Buttry told the Bowling Green Daily News, “but I think this game kind of woke some people up — beating a team like that by nearly 30.”

Purples coach D.G. Sherrill tabbed the Tomcats “elite,” and suggested it was because of games like Saturday’s: “They will just go on the road and play people.”

Ashland, hot from the perimeter, led by 10 points early in a departure from slow starts in prior out-of-the-area games at Highlands and Bardstown. But the Purples responded with a 20-4 run to take care of that.

Rose Hill figures to have its toughest test to date on Tuesday, when Ashland comes calling. The Lady Royals and Kittens will meet for the first time since 2015, which was the last season Rose Hill participated in the 64th District Tournament.

East Carter’s girls and Bath County’s boys have the longest active break from the floor. Neither has played since Jan. 9. The Wildcats are scheduled to go to Fairview on Tuesday, and the Lady Raiders are next slated to play at Menifee County on Saturday. East Carter coach Jeff Damron said if weather allows, he will see his team today for the first time in three weeks.

Billman’s counterpart on the gridiron, area football official assignor Brian Taylor, is even chipping in to help. This is Taylor’s second year refereeing basketball, he said after calling Greenup County’s boys’ 49-47 win over Symmes Valley on Friday night.

“It is certainly all hands on deck,” Taylor said.

With beaucoups of games involving northeastern Kentucky teams called off, this week’s Club has one entrant: Lawrence County’s Kensley Feltner, who dropped 36 points on Floyd Central on Friday night.