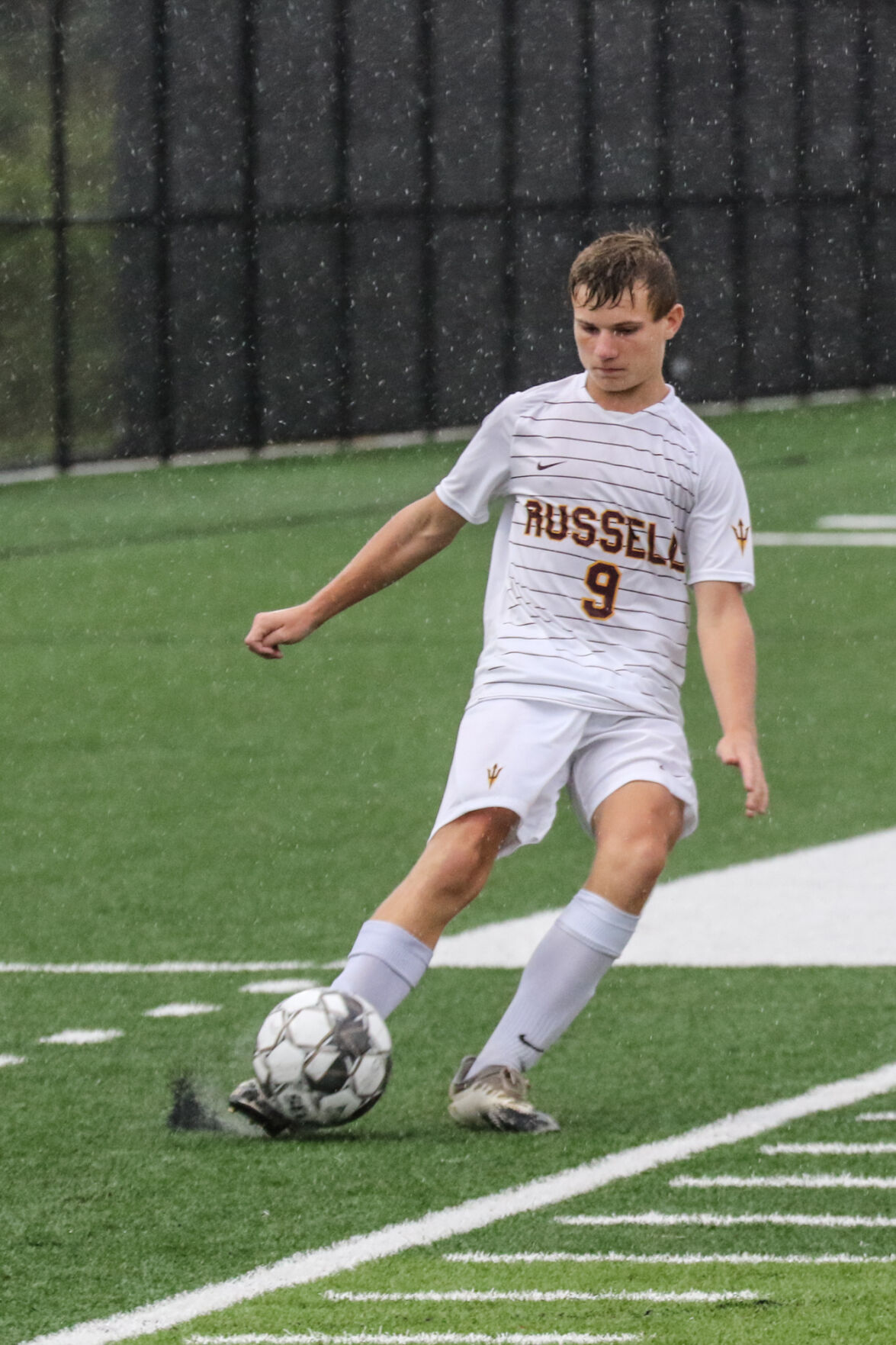 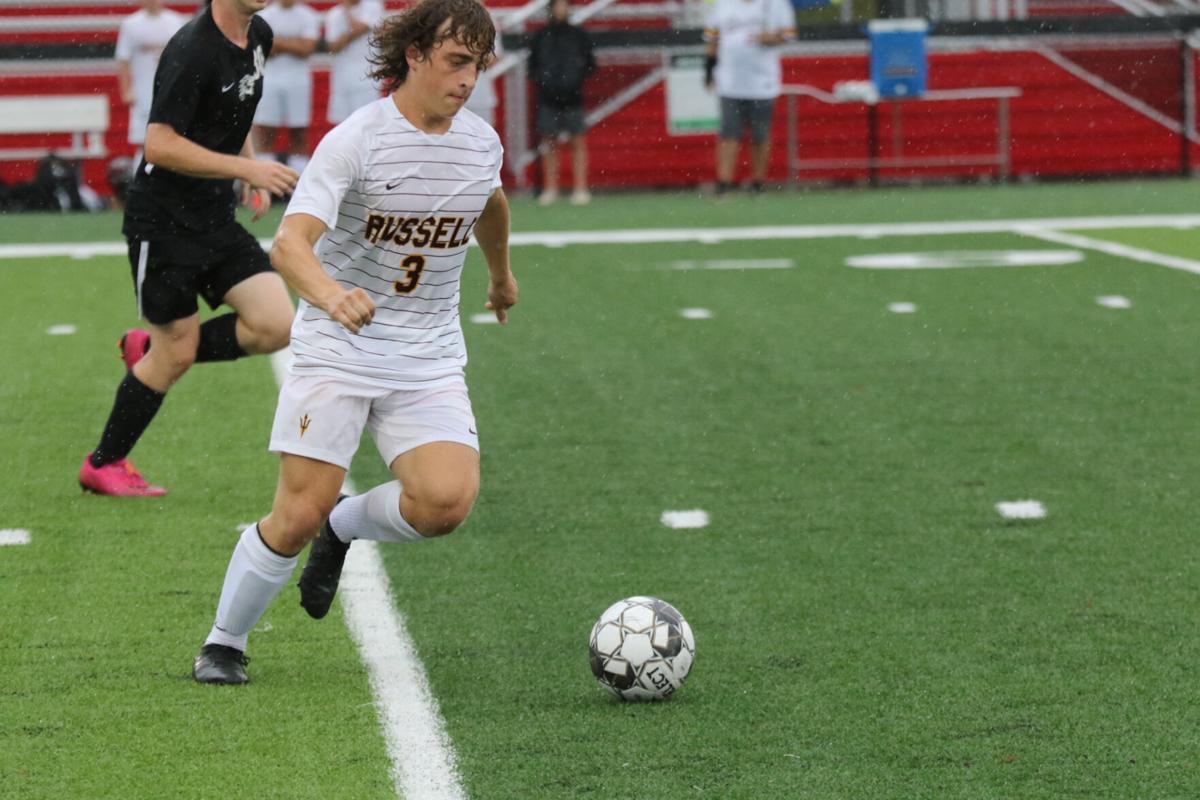 Russell’s Nathan Sabotchick moves the ball down the field against Boyd County on Tuesday. MATT JONES | THE DAILY INDEPENDENT 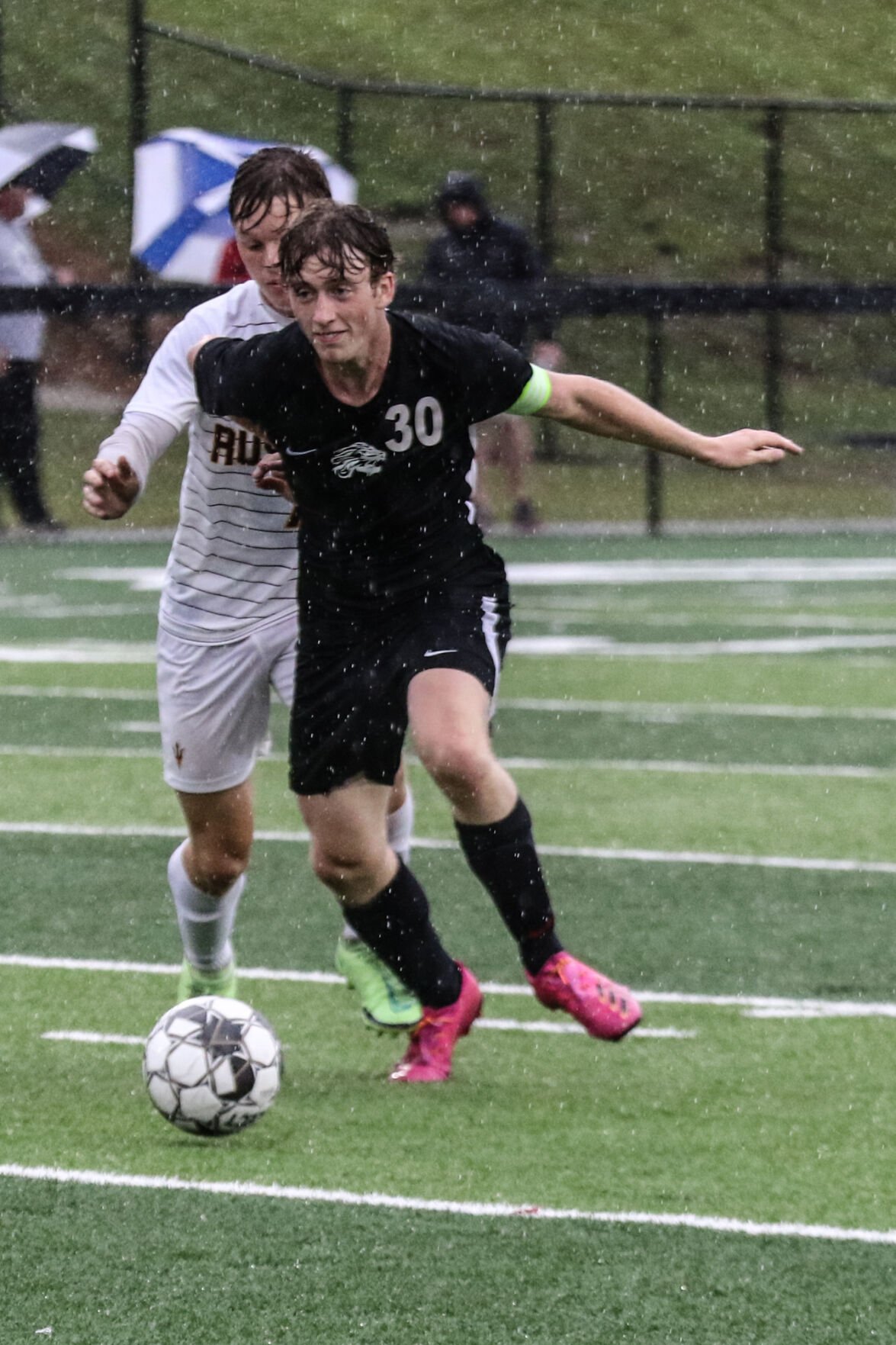 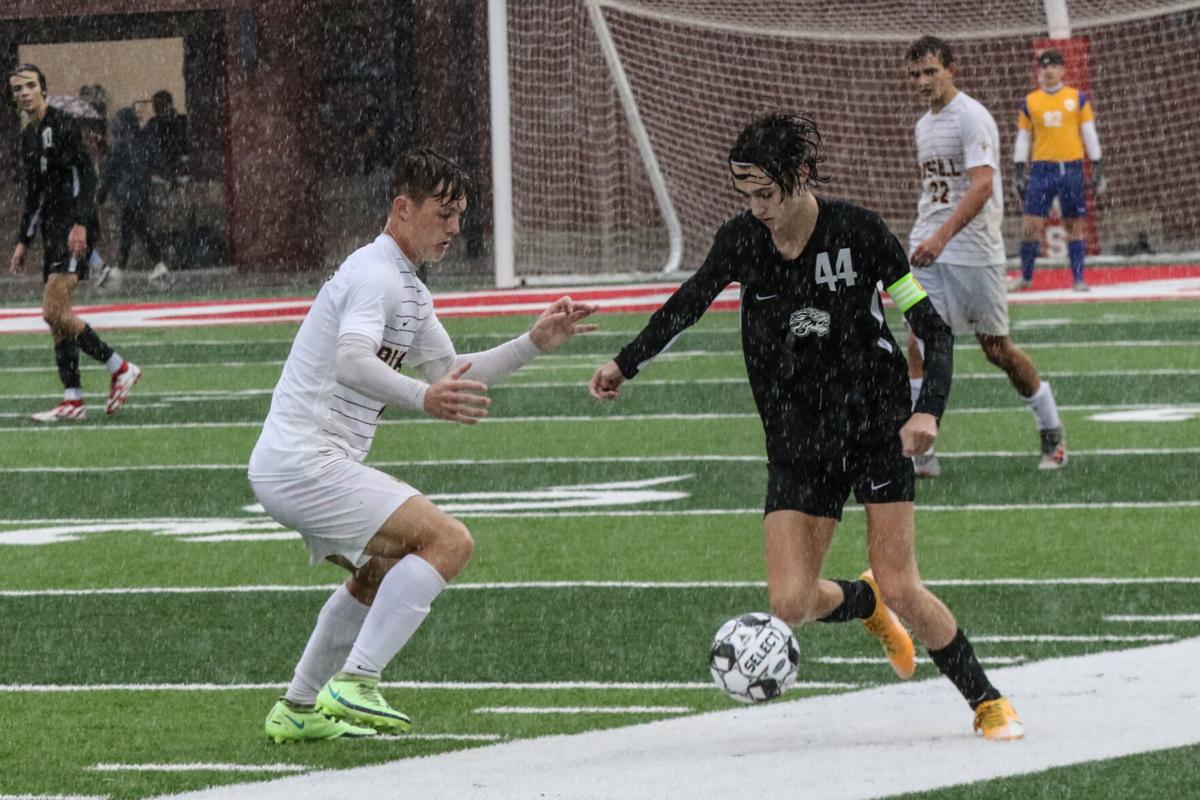 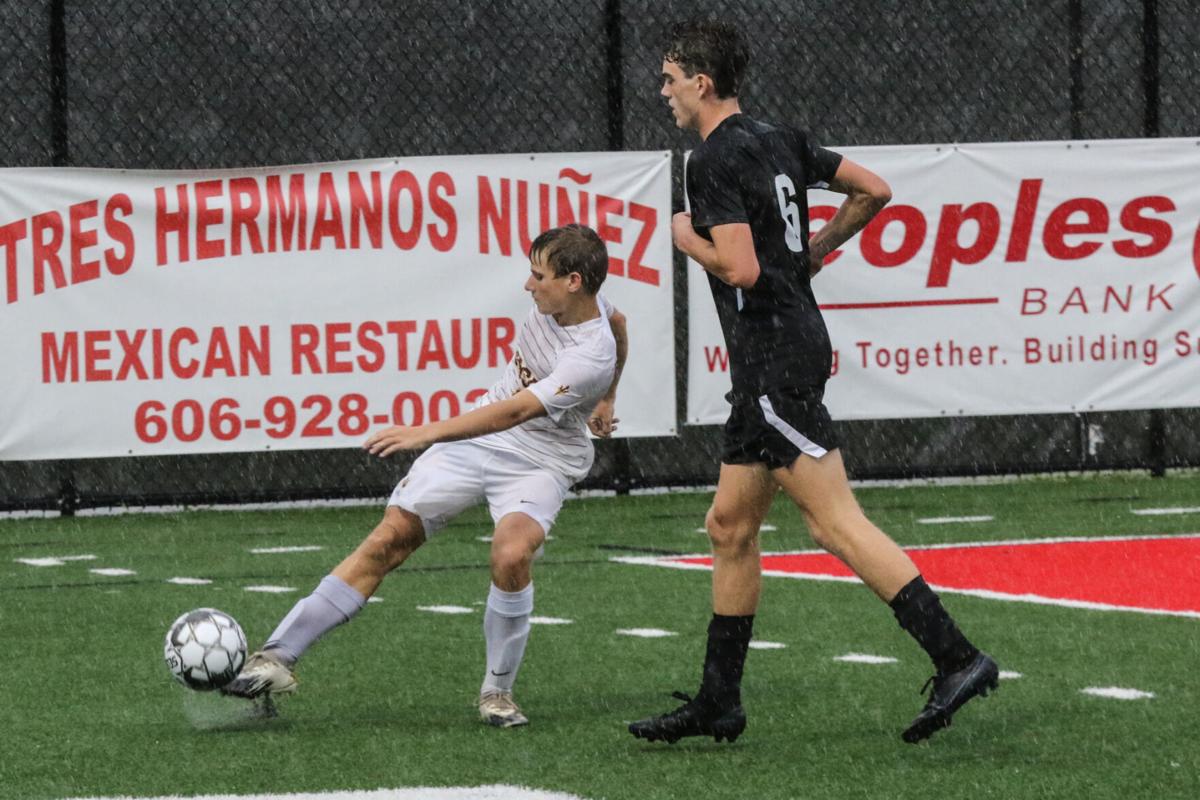 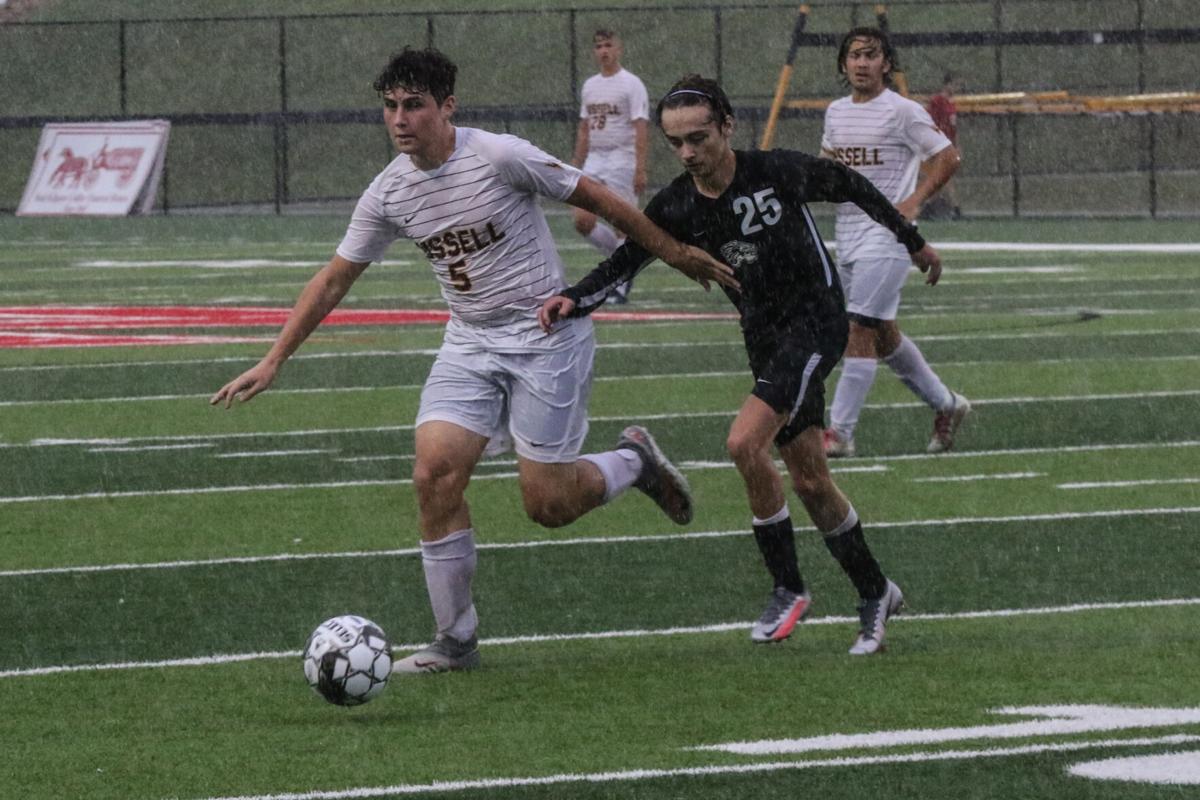 Russells’ Preston Guza shields the ball from Boyd County’s Braden Rucker during the first half of Tuesday’s match. MATT JONES | THE DAILY INDEPENDENT

Russell’s Nathan Sabotchick moves the ball down the field against Boyd County on Tuesday. MATT JONES | THE DAILY INDEPENDENT

Russells’ Preston Guza shields the ball from Boyd County’s Braden Rucker during the first half of Tuesday’s match. MATT JONES | THE DAILY INDEPENDENT

CANNONSBURG Neither team could muster many shots on goal Tuesday night, but that doesn’t mean Russell keeper Marcus Bellomy did not have plenty to do.

The Red Devils packed the defensive end against their quick and elusive opponent. Boyd County had its scoring chances in the opening half. Bellomy remained active and picked his spots to come off his line to close off the Lions’ offensive attack.

“It was the best that I have ever seen him play,” Russell coach Randy Vanover said. “For some reason, he plays really well in the rain. Our game plan was to sit back, and when we had the opportunity, we would go forward.”

“We kept telling them to get the ball wide,” he added. “We finally did and something good happened.”

Russell had just one shot on goal, according to unofficial statistics, but found a way to keep the Lions off the scoreboard and extend the match into overtime.

In the final moments of the first extra session, the ball was advanced to Nathan Totten. He collected the ball outside of the box. He spun around the defender and launched the ball into the Boyd County night.

It had enough air to elude the outstretched hand of the Boyd County keeper and found nothing but net. It gave the Red Devils the 1-0 win at the Boyd County Athletic Complex.

“I just told Nathan to be patient,” Vanover said. “Your time will come. He worked his butt off. He was a bulldog tonight and his time eventually did come.”

The Lions found its way through Russell’s back wall to get shot attempts in the box but had four balls sail over the crossbar in the first half.

“We had multiple opportunities in the first half,” Price said. “We had one-on-ones with the keeper. It could have easily been a 3-0 match in the first half. I told the boys in situations where teams will pack it in, we have worked on that. We handle possessions a lot better. We move the ball side to side a lot better.”

The Red Devils negated the Lions’ shot total in the final 40 minutes of regulation, and it gave them a chance to increase their offensive tempo.

“We just had to settle down,” Vanover said. “We were biting on moves. It was opening things for them. … We always want to possess the ball, but when you play a team like Boyd County, you just have to take your opportunities when you get them.”

Boyd County tallied nine corner kicks to Russell’s zero. The Lions mounted a late rally and had a free kick at the top of the box with three minutes left in the second half. Bellomy reached out and snagged the shot.

“You can want the game for 60 minutes, but you back up for 20 minutes and it can get you beat,” he added. “… We have to battle through it. Russell won the last 20 minutes with their energy level.”

Each team has a defeat in the 63rd District. The Red Devils host Ashland on Sept. 7 and a win would secure the top seed in the district tournament.

“It’s just confidence for us,” Vanover said. “We had a good win over Menifee County and (Monday) night against Johnson Central. Things are coming together. It’s all about building towards the end.”

The second part of the doubleheader between Russell and Boyd County will appear on dailyindependent.com and in Thursday’s edition.