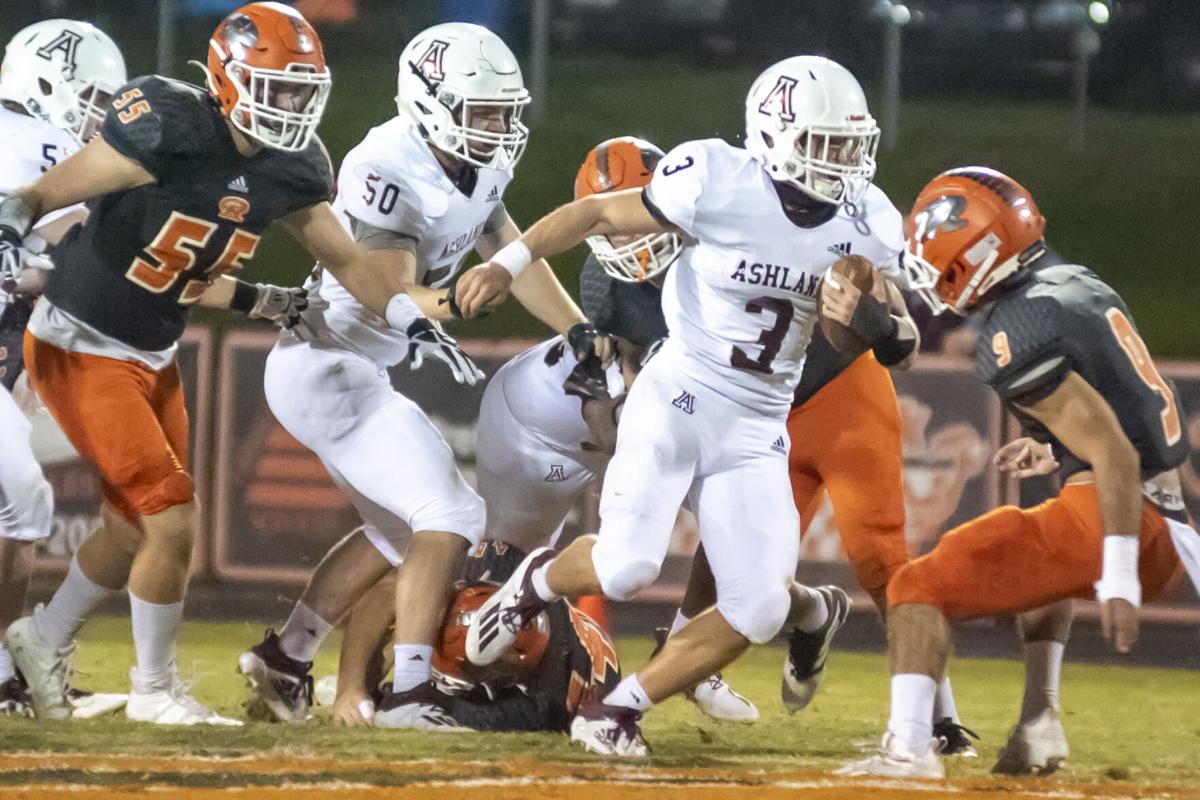 Ashland’s Caleb Tackett tries to evade the Raceland defense during a run on Friday. 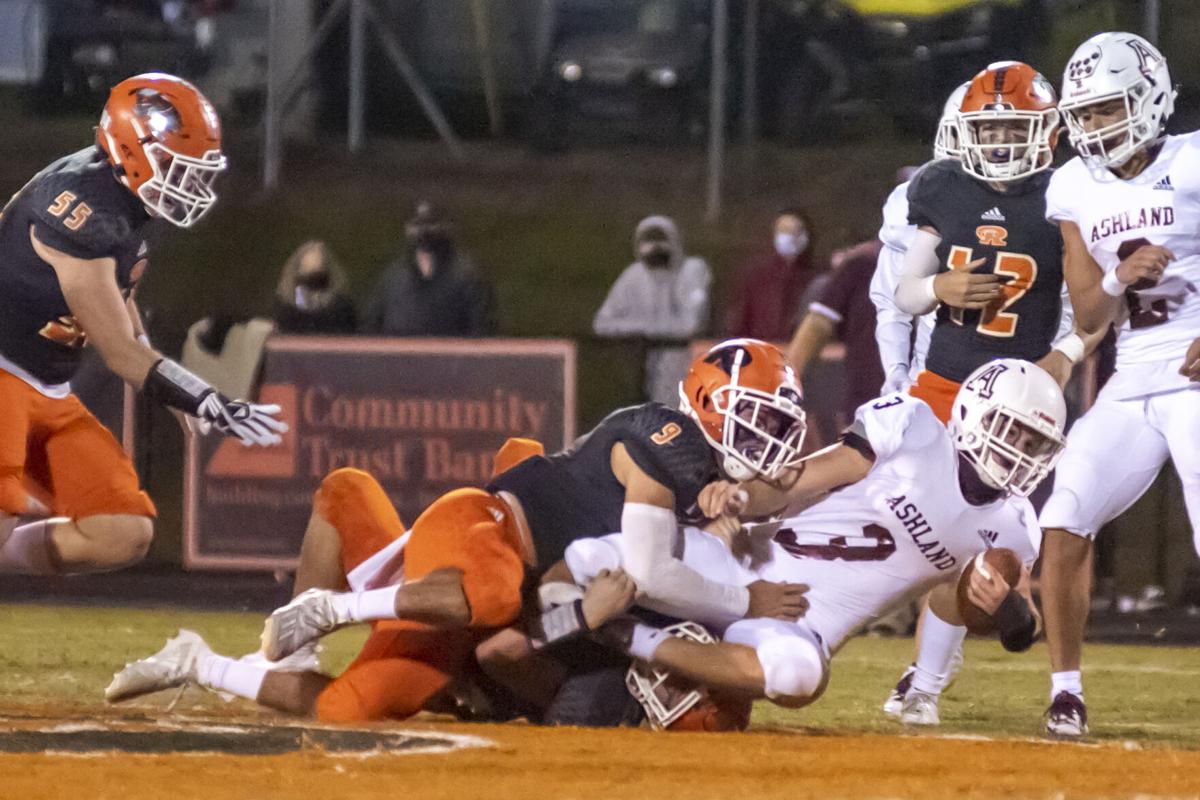 Ashland’s Caleb Tackett leans forward as he is tackled by Raceland’s Noah Reeves on Friday night at Ram Stadium.

Ashland’s Caleb Tackett tries to evade the Raceland defense during a run on Friday.

Ashland’s Caleb Tackett leans forward as he is tackled by Raceland’s Noah Reeves on Friday night at Ram Stadium.

ASHLAND Caleb Tackett has played long enough and well enough at Ashland to crack the 300-career-tackle mark on Friday night against Raceland. But that isn’t the only measure of the senior linebacker’s longevity around the program.

“I look up,” Tomcats coach Tony Love, “and still above coach Tackett’s desk is the picture that was taken of (Caleb) when, I think, he was 6 or 7 years old and he’s sitting on a football during practice drinking water.”

Caleb Tackett is the son of Ashland defensive coordinator Chad Tackett. The two have attended Tomcats practices at Alumni Field together since Caleb was about 5 years old, Chad said.

Now, Caleb plays a central role in those practices as the middle linebacker who has also assumed greater offensive responsibilities as a complement to Keontae Pittman and company in the backfield.

“It’s been probably one of my greatest joys that I’ve experienced as a father and as a person, just being able to be with him and watch him grow from his freshman year up through his senior year,” Chad Tackett said. “The progression that he’s made, being able to see the work that he does behind the scenes away from practice, has been enjoyable.”

Tackett locked in a starting spot as a strong-side linebacker as a sophomore. He moved to middle linebacker this season, where he leads Ashland with 19 tackles, 13 of them solo.

“He’s a mainstay on the defense, and he’s got so much experience that he’s gonna be able to do some things to help us out filling the voids of the players that we’ve lost,” Love said.

Tackett hit the 300-tackle career mark with his sixth stop out of eight total against the Rams. His father correctly predicted Caleb didn’t know how near he was to that total coming into his senior season.

“I didn’t know I was that close, but I don’t focus on stats,” Tackett said. “I try and do as good as I can to benefit the team.”

As it turns out, that also means more carrying the ball. Tackett rushed for 136 yards and two touchdowns in mop-up time in a runaway victory over East Carter as a freshman, but only ran it once over the next two seasons, spraining his ankle on a carry for 2 yards at Knox Central as a junior, he said.

That changed dramatically in this year’s opener on Sept. 18 at Bourbon County. Tackett ran for 119 yards and two TDs — doubling his career scoring output — in a 44-6 victory in Paris. And it meant some maroon paw helmet stickers for offensive achievements to accompany the skull-and-crossbones stickers, for defense, that typically dot Tackett’s lid.

“That was pretty sweet, I’m not gonna lie,” Tackett said of the offensive outburst.

Sweeter, perhaps, because there was a time this summer the Tacketts could be forgiven for thinking Caleb’s senior season might never come. First came the statewide pandemic-caused postponement, followed by the cancellation of Ashland’s scheduled opener due to a COVID-19 case in the program.

“It’s been a big stressor on our family, because we’re a football family,” Chad Tackett said. “He’s put a lot of work into his career and being a Tomcat, and he’s wanting to see that hard work pay off.”

Added Caleb: “We were worried we were not gonna get a season, but we just kept on pushing and doing some extra work whenever we could, and getting as good as we could be for that first game.”

Tackett is listed at 5-foot-9 and 170 pounds but has more than held his own as a tackler. Love called Tackett “pound-for-pound probably one of the strongest kids that’s come through our program” and recalled such former Tomcats as Trace Stafford and Willie Cline who played roles greater than their physical size.

“We’ve made a living, honestly, out of smaller guys doing a great job for us and playing like giants out there,” Love said. “I think a lot of times people have a perception that we’ve got huge kids or something. ... The thing is, they all have that passion, that fire. Sometimes it may be wanting to prove something, but I think it just has to do with, they’ve bought into the program.”

That was never a tough sell for the son of a 22nd-year coach — the last 14 of them at Ashland.

“He’s been one of the hardest-working kids that we’ve had here for several years, and it wasn’t by accident that he’s been an outstanding linebacker for us,” Love said of Tackett. “He’s put in the work, he studies video, he understands game plans, and he’s around it all the time. He’s been around it all of his life.”