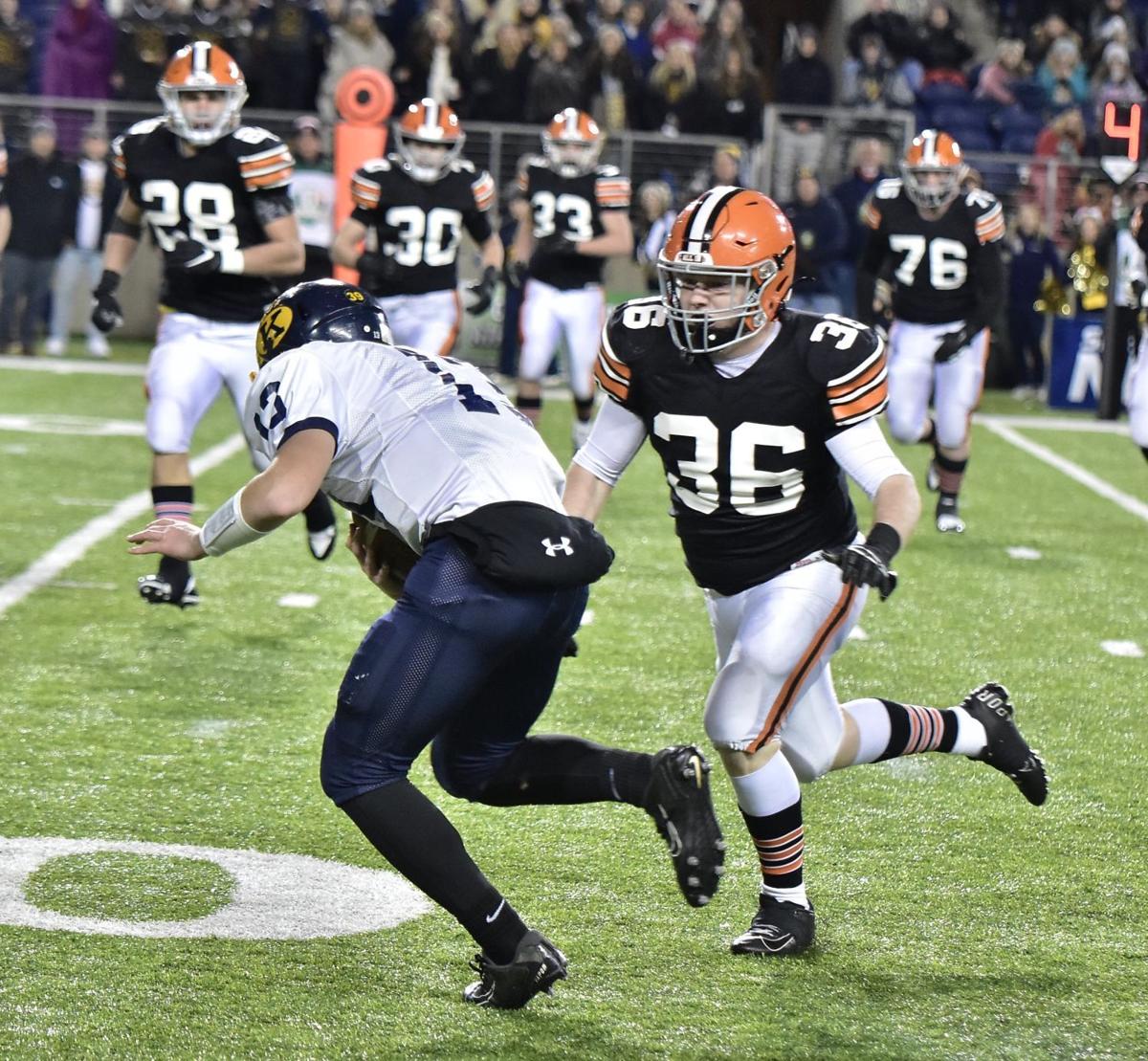 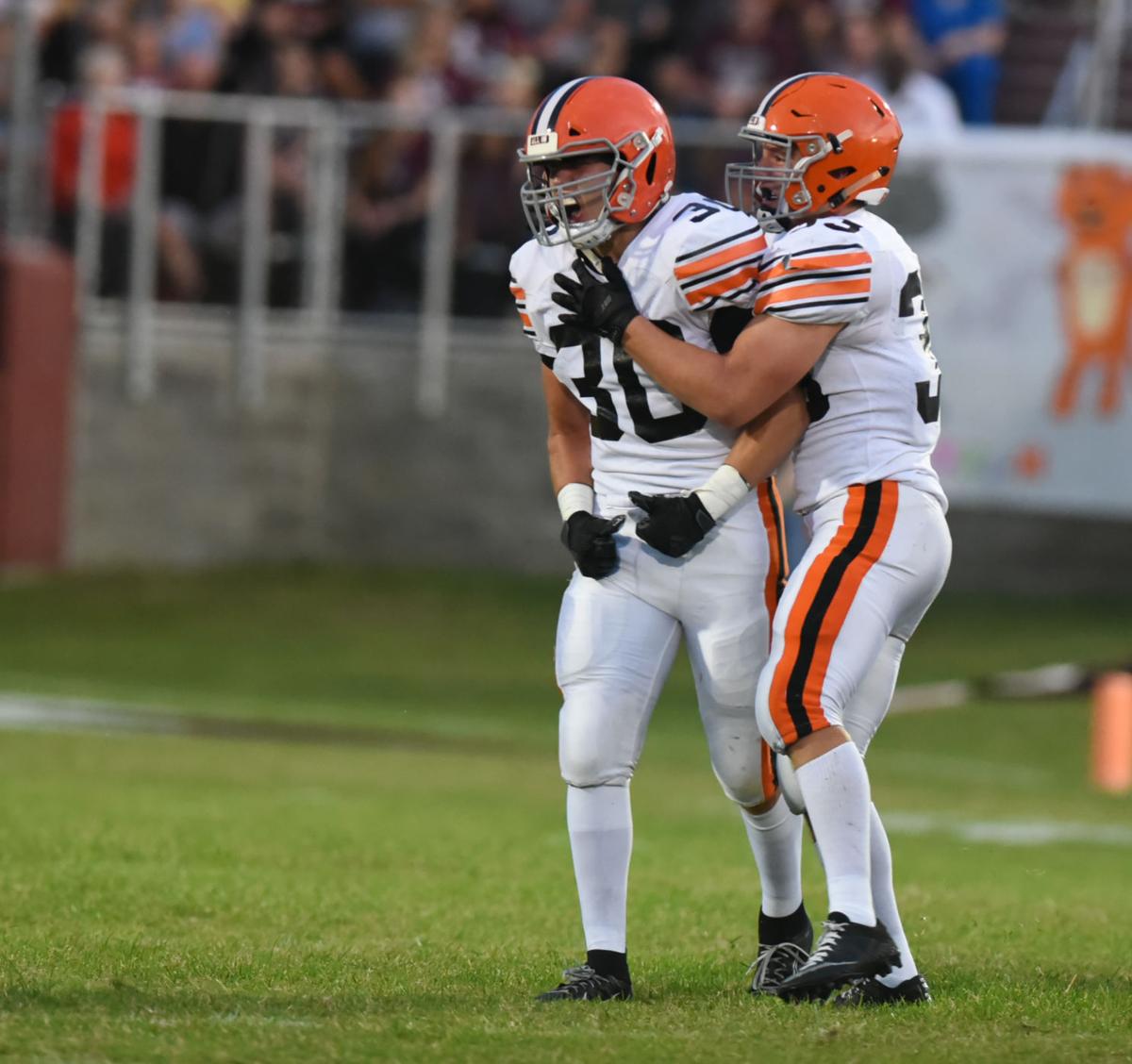 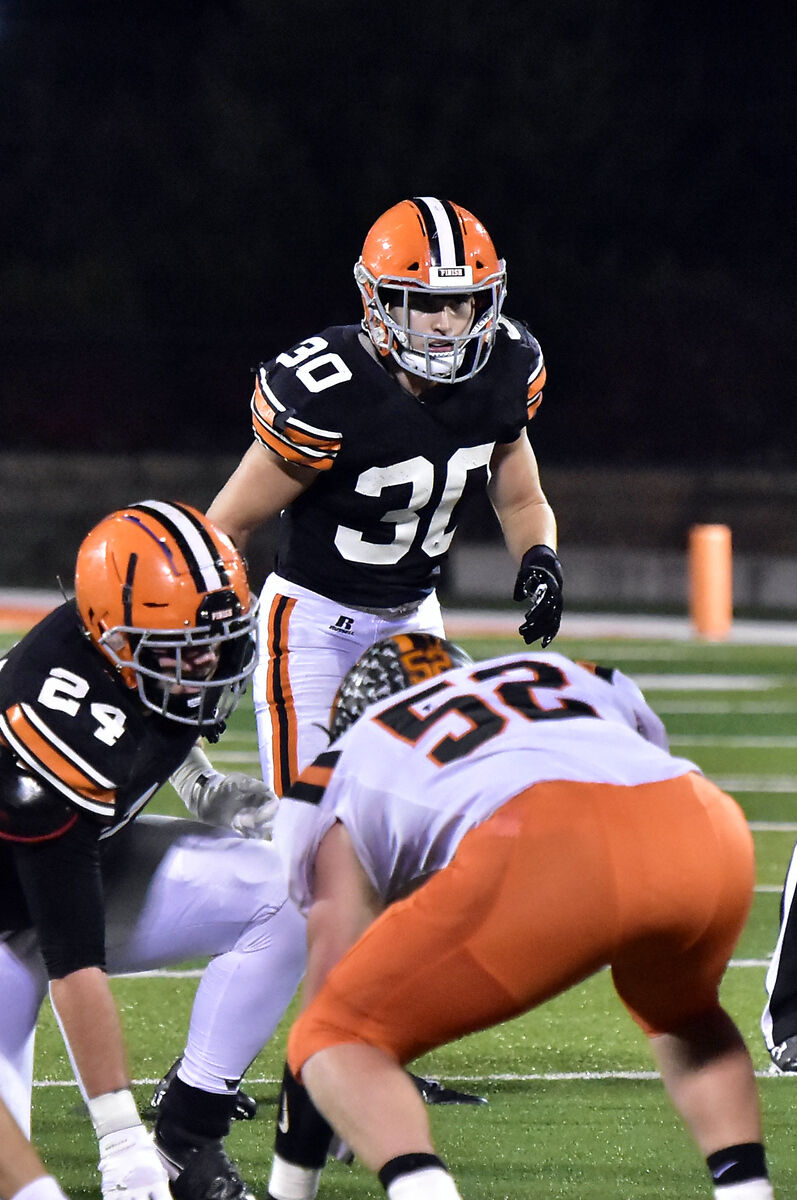 Ironton’s Cameron Deere (30) prepares for the snap against Ridgewood in the Division V, Region 19 championship game at Tanks Memorial Stadium on Nov. 13.

Ironton’s Cameron Deere (30) prepares for the snap against Ridgewood in the Division V, Region 19 championship game at Tanks Memorial Stadium on Nov. 13.

IRONTON The numbers that grace the entrance to Tiger Alley represent years of postseason success.

On Saturday, Ironton will attempt to secure its own moment in time with the addition of a third state championship. The team has plenty of players putting up big numbers of their own this season to help make that happen.

“It means everything to us,” senior linebacker Dalton Crabtree said.  “Everyone that has grown up in Ironton has the same goal. We want to put another (championship) up there. We have been looking forward to this game all year. We had to take it one week at a time to get here. We are ready for it and we're ready to play.”

Crabtree is part of a formidable front seven on the Ironton defense. The Fighting Tigers have given up just seven points a contest this season on their way to an 11-0 record.

Ironton heads into another clash with undefeated Kirtland in the Division V state championship on Saturday at Paul Brown Tiger Stadium in Massillon. The Hornets stung the Fighting Tigers in last year’s final, 17-7, in Canton and that feeling has never left the thoughts of the players 11 months later.

“I've been ready to play them ever since the clock hit zero (in last year's final),” Cameron Deere said. “There are times when you really can't sleep because you are thinking about what I could have done better playing in that game. Now we have the opportunity again. We are really excited.”

Gunner Crawford said he has envisioned this moment ever since he laced up his first pair of cleats. The senior is one of 13 defensive players that have recorded at least 20 tackles. But they all play with one purpose and a desire to wrap up the school’s first state title since 1989.

“I've been dreaming about this moment since pee-wee football,” Crawford said. “It will be the best thing in the world to win it. I want to do it for my buddy Rocky (White). His grandpa just passed away. Every guy on this team wants to get him a ring.”

Third-year coach Trevon Pendleton said the defense plays well together. They spend a lot of time outside the lines and that makes their bond is unbreakable when they get on the gridiron.

“These guys are a close group off the field, as well,” Pendleton said. “They're together all the time. It allows for an easy transition on the field. They can communicate and feed off each other. They are definitely band of brothers out there.”

Many of the Fighting Tigers have played together since they were little kids. They have grown up immersed in the championship culture at Ironton. It’s important that they carry on that legacy and set the same example for younger players.

“I’ve played football here starting with flag and now it’s my third year starting (on the varsity),” Crabtree said. “The defense is really hungry this year. We take it upon ourselves to elevate the team. We don't like giving up one yard or one touchdown. We are very well rounded.”

Deere joined the crew in eighth grade when his family moved to Ironton. He quickly developed the same philosophy.

“We come in with an attitude that no one is going to be able to move the ball on us,” Deere said.

Nate Cochran and Reid Carrico have each eclipsed the 60-tackle mark. Deere and Crabtree have tallied 56 and 51 tackles, respectively. Crawford has accumulated 45 tackles.

Crawford started out as a linebacker and moved to the defensive line before his sophomore year. The senior said he has grown into the position with help from former teammates Junior Jones and Seth Fosson.

“When we need to get something done, everybody is there to do it,” Crawford said. “I know I can count on every guy and they can count on me. We always play as one. Everyone has a job to do and everyone knows what to do.”

“We do rely on our defense to make huge plays,” he added. “These last three games, we fought until the last play and we kept battling. We're always going to step up to the challenge. We're not going to back down and we will keep fighting.”

Ironton has relied on its defense in the last three rounds of the playoffs. The Fighting Tigers outlasted Harvest Prep (21-14), Ridgewood (17-7) and previously unbeaten Roger Bacon (22-19) in three close contests to make their second consecutive state final appearance and their 10th in school history.

“It’s exactly what we expected from these guys,” Pendleton said. “When you put their backs against the wall, they will bow up and continue to fight. You are going to earn everything you get against them. That's just the type of kids they are. It's kind of their mentality.”

Depth has been a key component of the Fighting Tigers' success. Crabtree believes the team is prepared to battle on the gridiron because they are competing against top-level talent in practice.

“When you have the kind of players that we do, you are practicing against the same kind of players you will see on a Saturday night every day,” Crabtree said. “It really helps out and allows us to stay fresh on the field.”

Ironton has a multitude of players who step up when the game is on the line. With Roger Bacon driving towards what could have been a game-winning touchdown last week, junior Ashton Duncan had two tackles for loss, including a sack of quarterback Logan Huber.

“That's what it's all about,” Crabtree said. “It’s having guys that make big plays. He works hard and he's going to be a great player.”

“When he turns it on, he is a kid that is a force to be reckoned with,” Pendleton added. “He has all the talent in the world. He plays on both sides of the ball. He plays at a very high level and it’s great to see him reap the benefits.”

The Fighting Tigers know they will need to be at full strength against Kirtland on Saturday. The Hornets defeated Otsego, 39-13, in last week’s state semifinals to win their 40th game in a row. According to Max Preps, it’s the fourth-longest active win streak in the country.

Deere expects Ironton to ready for the big stage this time around after the Tigers' trip to Canton and the pro football Hall of Fame last season.

“Last year under the bright lights, the big game kind of got to us," Deere said. “Most of us played in that game. We were happy to be in the game last year. I think we'll be more relaxed going into the game.”

Crawford believes it led to a slow start even though the Fighting Tigers held the Hornets to their lowest point total of the season in last year’s final after entering the contest averaging 41 points a night.

Kirtland sports a potent offense once again with a 43.5 scoring average entering the championship contest.

“When you are in a big game like that, you've got to be hitting on everything at all times,” Crawford said. “You can't lose your focus. We got to play hard and play physical. We have to make sure we are doing the right things because Kirtland always does the right things.”

Pendleton said his message to his defense will be identical to the one he delivers all season.

“We preach to our kids that there is a difference between making every play and making every tackle,” Pendleton said. “If we make every play, we will be fine because they have the trust of their teammates.”