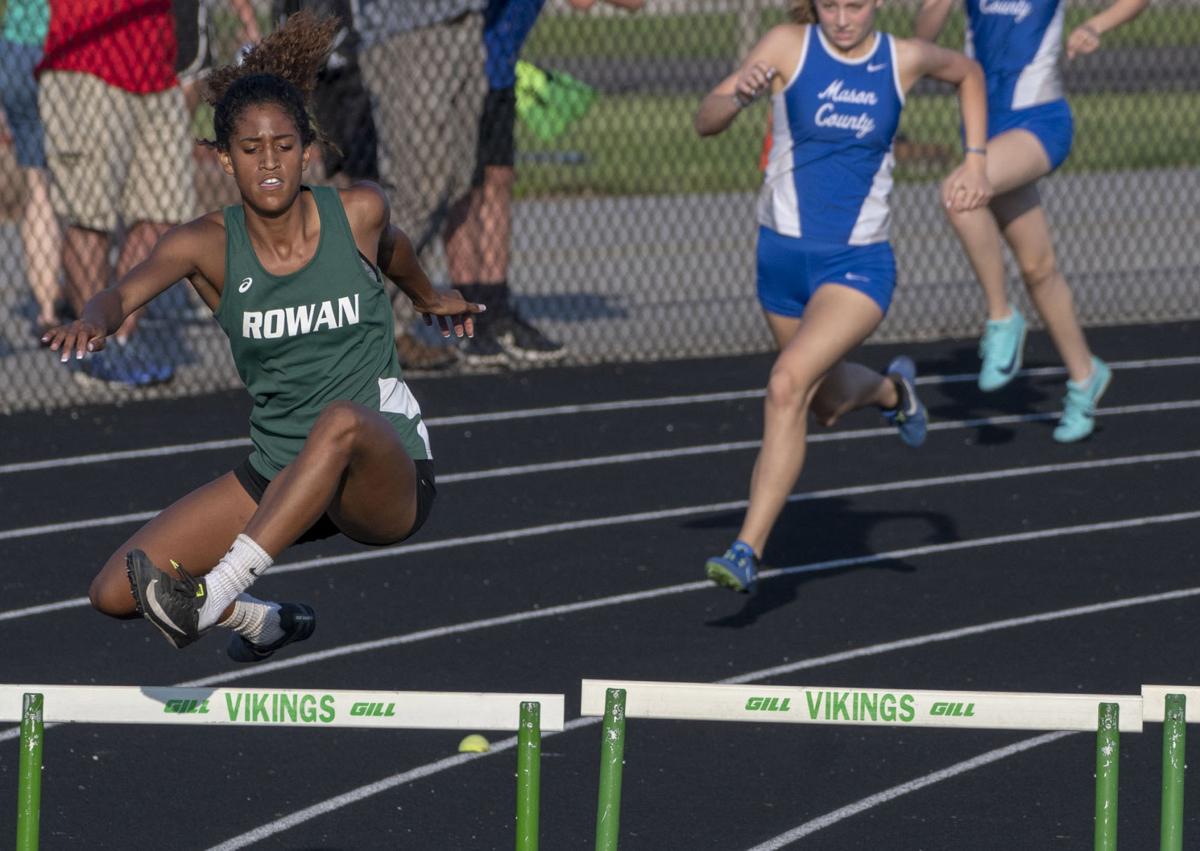 Rowan County’s Promise Cross leads the field in the 300 meter hurdles Saturday, May 18, 2019, during the Class 2A, Regional 6 Track and Field meet in Morehead, Ky. Photo by John Flavell / FOR THE DAILY INDEPENDENT 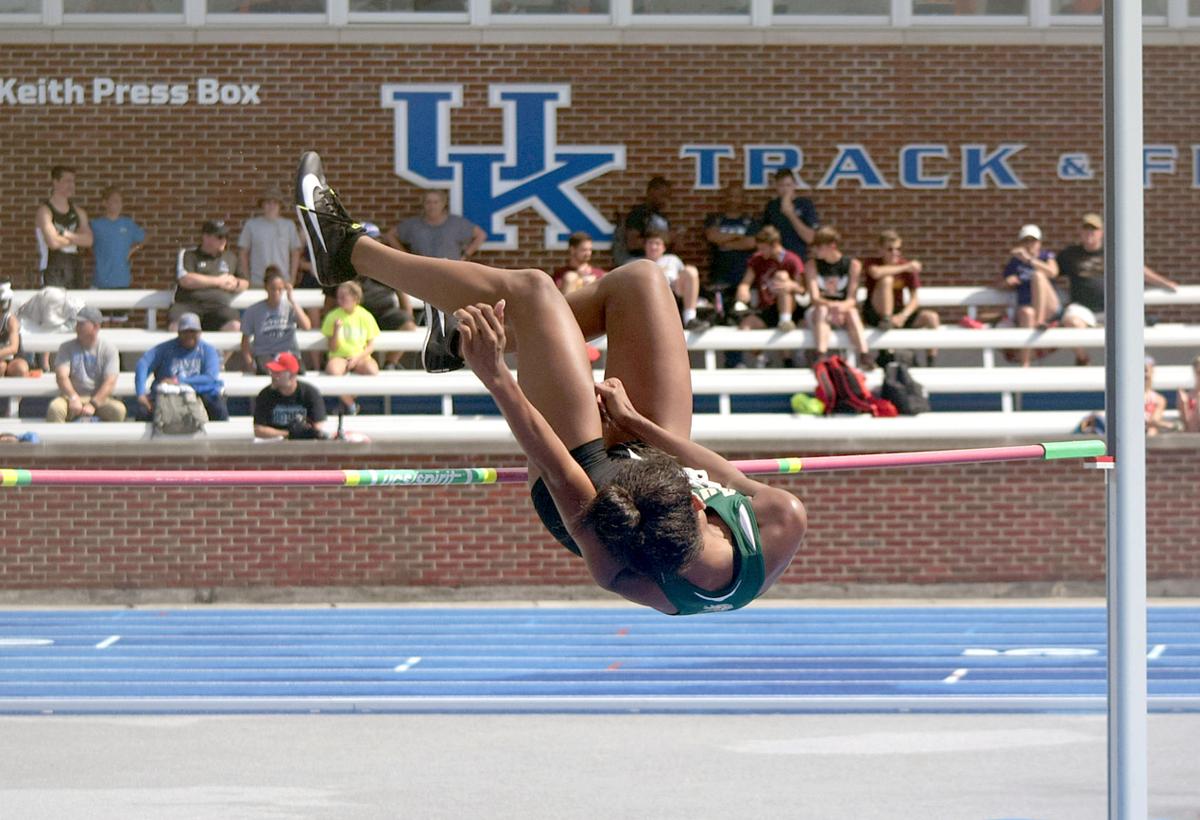 Rowan County’s Promise Cross leads the field in the 300 meter hurdles Saturday, May 18, 2019, during the Class 2A, Regional 6 Track and Field meet in Morehead, Ky. Photo by John Flavell / FOR THE DAILY INDEPENDENT

Last spring, Promise Cross overcame a freak injury the day before the state track and field meet to successfully defend her Class 2A high jump title and finish second in both hurdle events.

The inspirational performance capped off a season in which Cross earned Midway/KHSAA Female Student-Athlete of the Year honors for track and field.

Cross stepped on a piece of broken glass while staying at her sister Desiree’s house in Lexington.

A shard punctured the right big toe of her plant foot.

“With the trainer, we worked on ways to tape her up,” Rowan County coach Shawn Thacker said.

Cross was unable to find her rhythm in the long jump because of the problem and fouled on all three attempts.

“Honestly, it was (painful),” Cross said. “I think the worst was long jump. I was short-stepping it.”

Despite that disappointment, Cross did more than persevere. In the high jump, she cleared the bar at a personal-best of 5 feet, 7 inches to win by five inches.

The three-sport star managed to pop another PR with her 100-meter hurdles time of 15.30. In the 300s — her final event — Cross led before hitting a hurdle, causing her to break stride.

“It was a fight to the finish,” Thacker recalled. “I wasn’t sure Promise would even medal. She made a strong push and just got beat at the finish. She showed a lot of grit, determination and mental fortitude. A lot of kids wouldn’t have been successful in her situation that day.”

Cross, however, had trained well for the championships and could only wonder what might have been without the ordeal.

Quickly setting her sights on 2020, Cross played soccer last fall and then decided to concentrate on track and field rather than return for basketball.

In January, she signed with the University of Toledo for track. Cross looked forward to the outdoor season after enjoying indoor meet success, but then came the coronavirus outbreak. Last week, the KHSAA officially canceled all spring sports.

“Mostly, I’m sad I didn’t get to experience my last season with our team and getting to go out with a bang, that kind of thing,” Cross said.

Thacker shared in the disappointment of the Lady Vikings’ senior leader.

“It’s such a shame. Promise had a lot of unfinished business she wanted to take care of this year, especially on the big stage at the state meet,” Thacker said.

Rowan County’s track and field program has grown under the coach’s direction.

“It was going to be an exciting year,” Thacker said. “The girls were looking forward to seeing how good we could be. With Promise and several of the other girls we thought we could score between 40 and 50 points at State. That puts you in position for a podium finish.”

At the same time, her versatility continues to grow.

About a year ago, Cross competed in a heptathlon (seven events) for the first time with her Team Kentucky travel squad.

“I won that meet,” Cross said of the Louisville event. “I got to try new things. I won throwing the javelin. I threw shot put and ran the 800 for the first time. I loved everything about that meet.”

Cross chose Toledo as a multi-sport athlete and is eager to see where that will lead.

“My college coach wants to focus on high jump and he said I could try other things,” she said.

As an eighth-grader, Cross was playing middle school soccer when Thacker got her to start working on the high jump. Rowan County’s successful boys basketball coach can recognize a gifted athlete when he sees one.

“I didn’t know a lot about it,” Thacker said of high jump technique, “but I told Promise she was going to be a track star. I think she finished fifth in the state that year. She’s just a natural talent.”

Thacker said he firmly believes Cross had the ability to win four state titles as a senior. She just won’t have the opportunity.

Even without piling up a bunch more points, she’s topped 60 at the state meet for her career. Her approach also helped Cross stand out.

“Promise is a great kid,” Thacker said. “She’s very coachable, fun to be around. She always has that smile on her face.”

The triple-sport All-Area athlete scored more than 1,000 points for the basketball Lady Vikings. On the soccer field, she totaled 105 goals and 29 assists.

“No matter what sport it’s in, she’s been able to compete at a high level,” Thacker said.