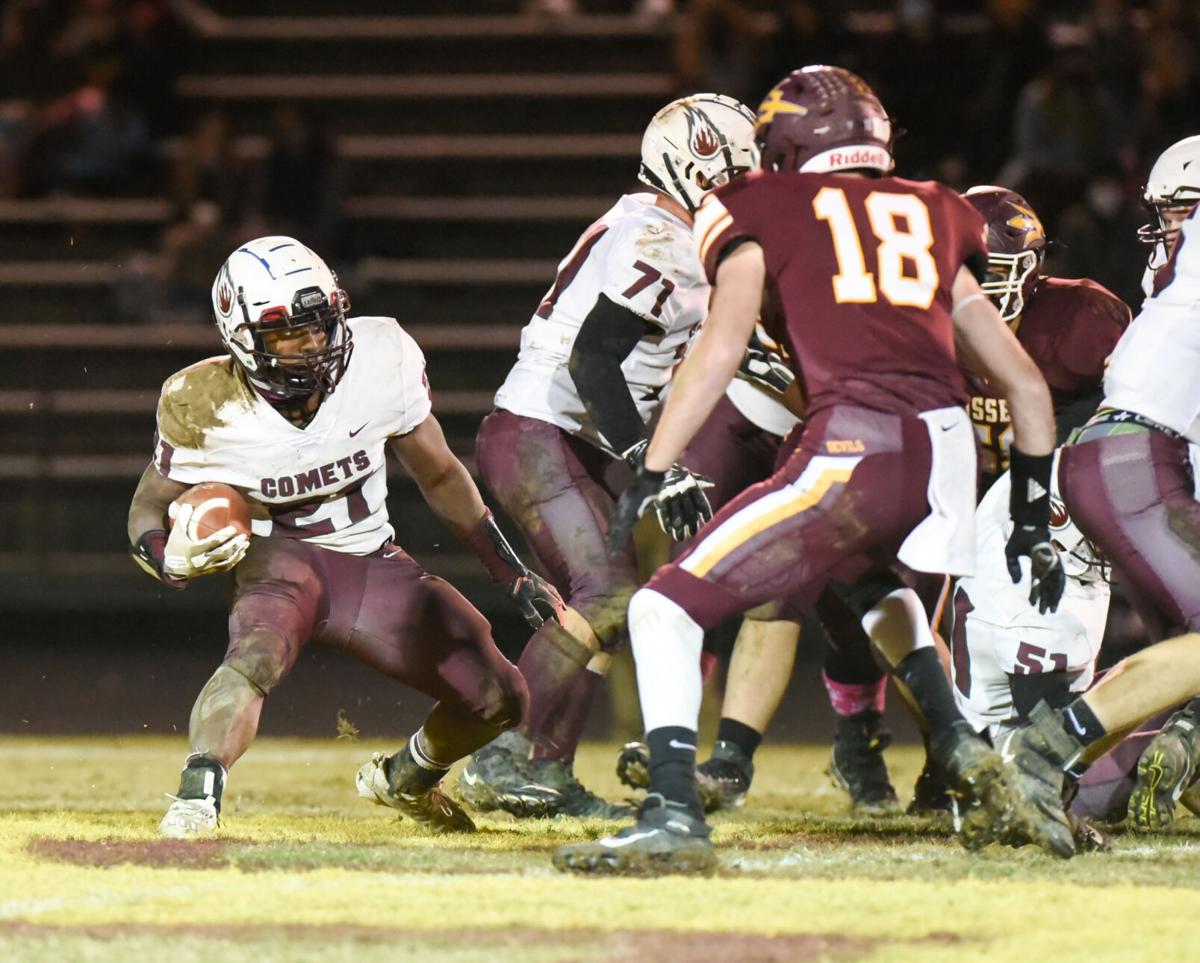 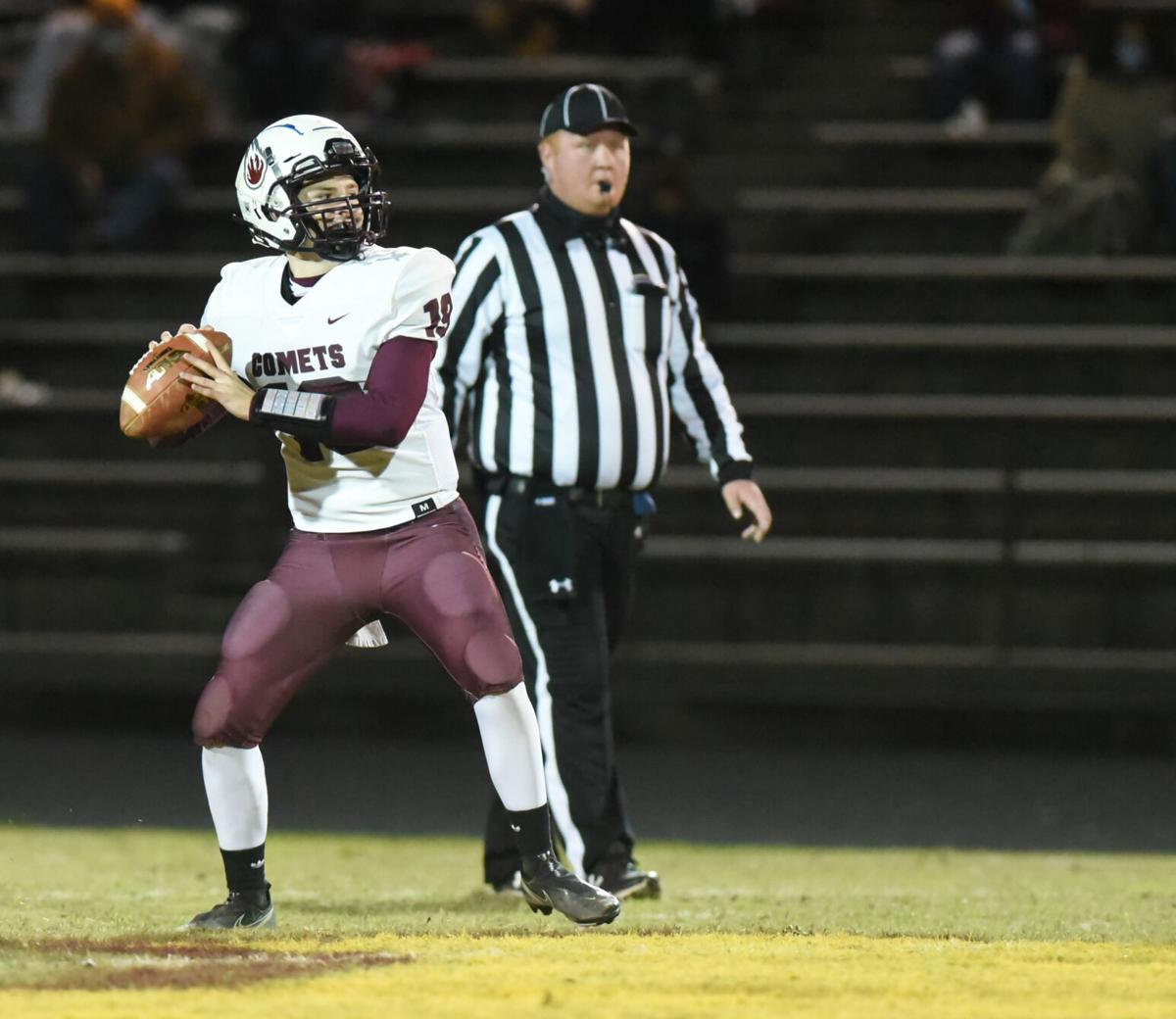 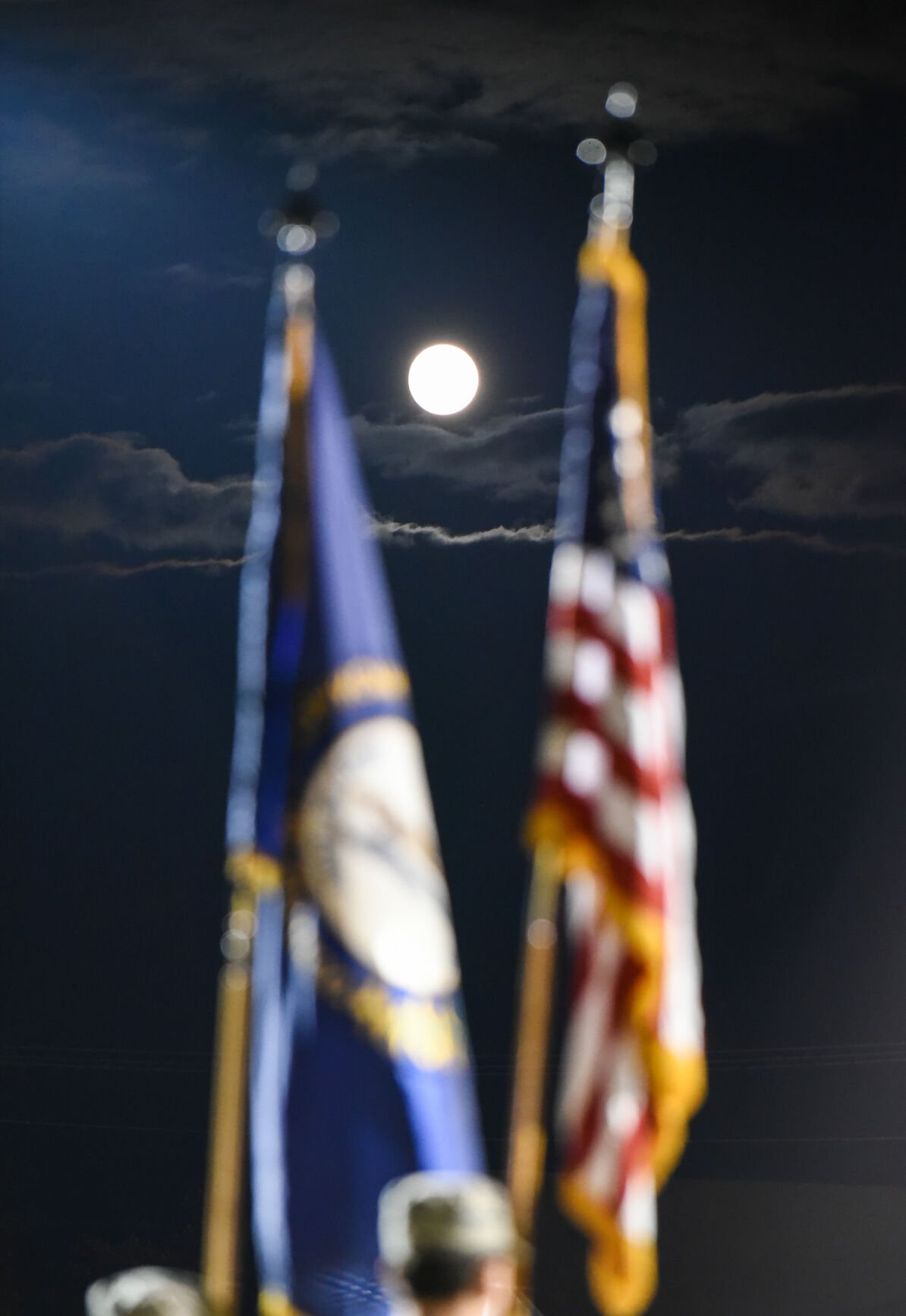 The full moon brightens the evening sky on Friday evening prior to the game between Russell and West Carter at Henry R. Evans Stadium. 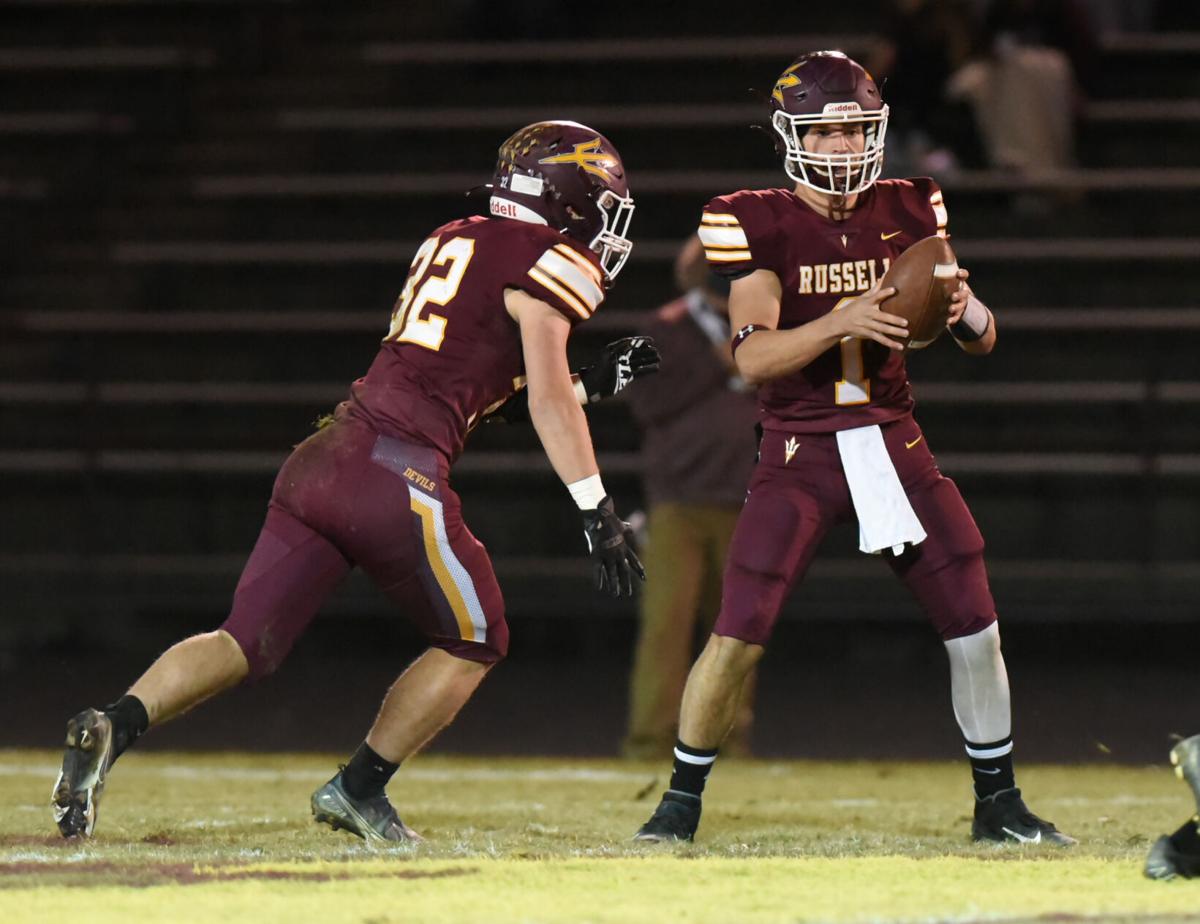 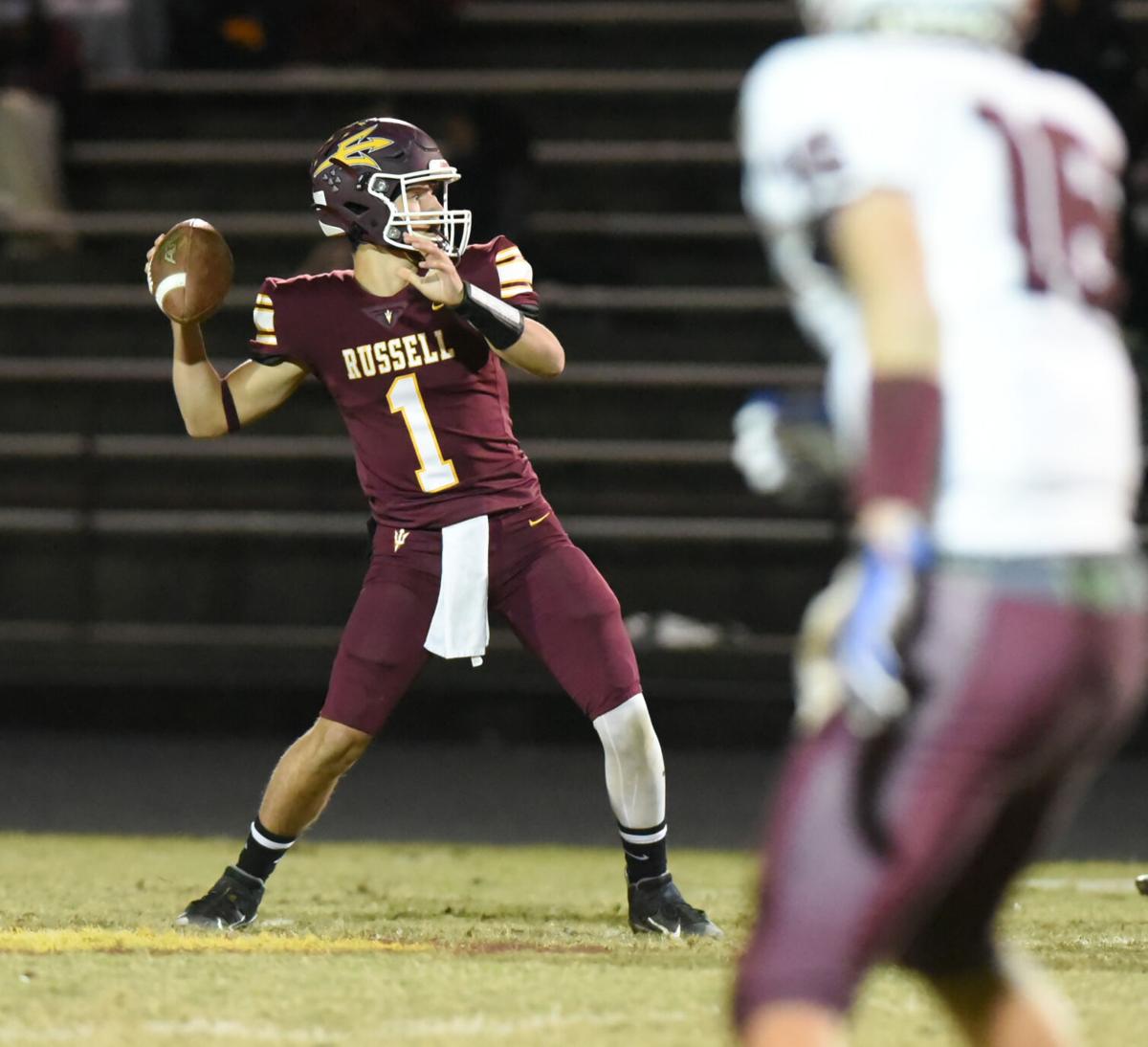 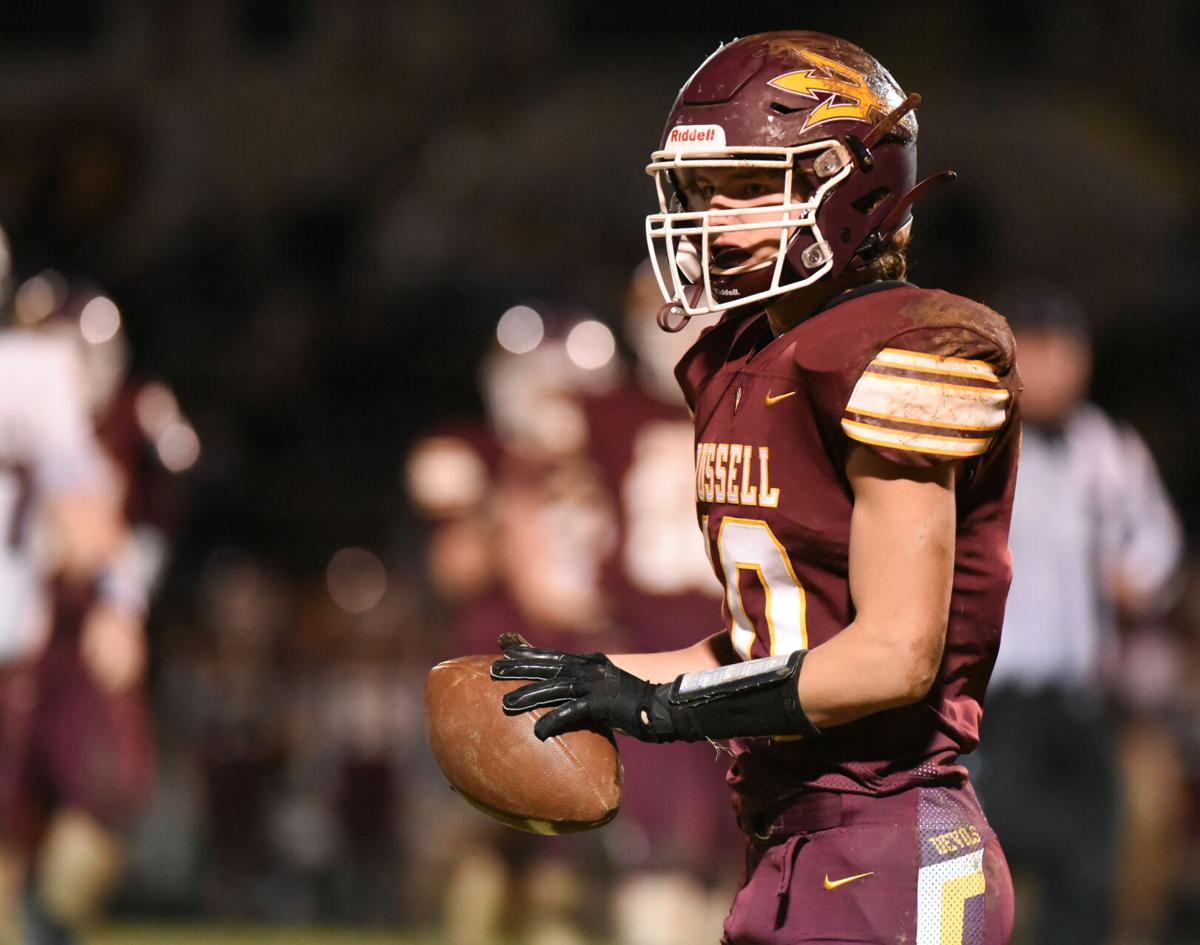 Russell's Mason Lykins holds the football after making a catch against West Carter on Friday evening at Russell. 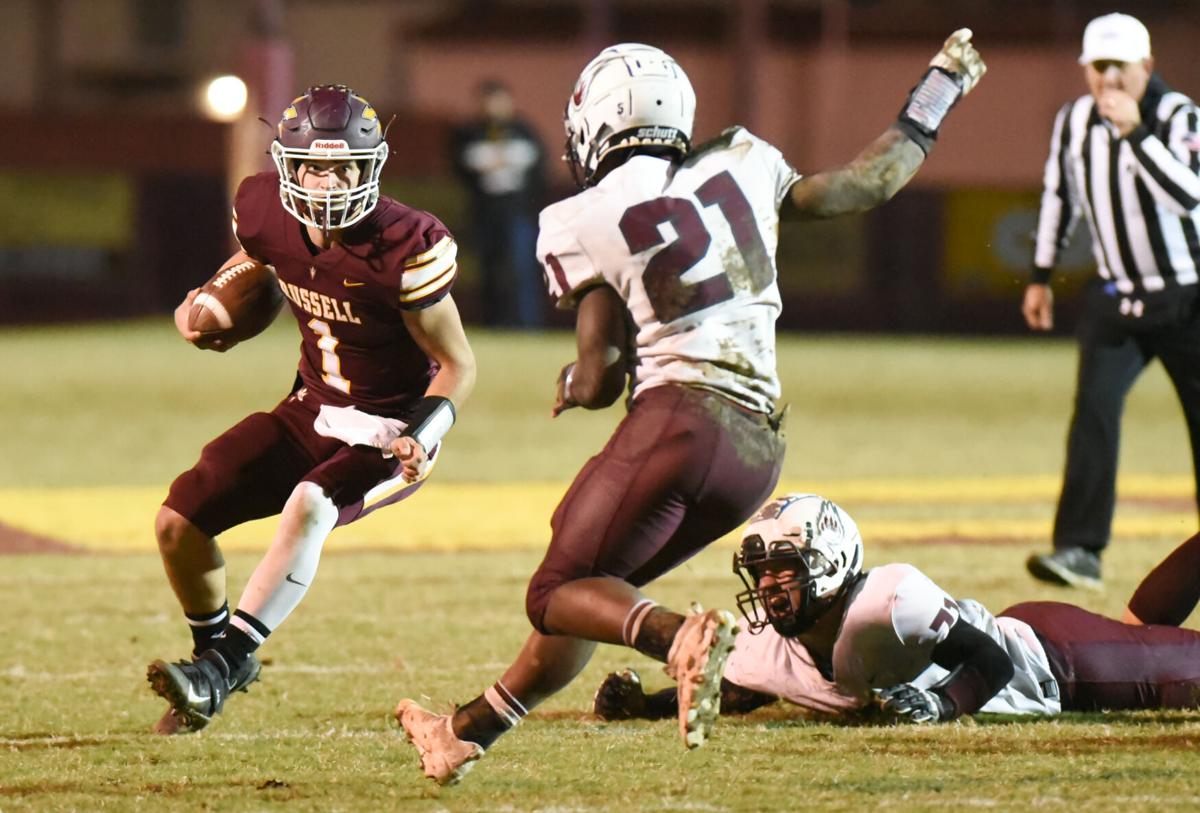 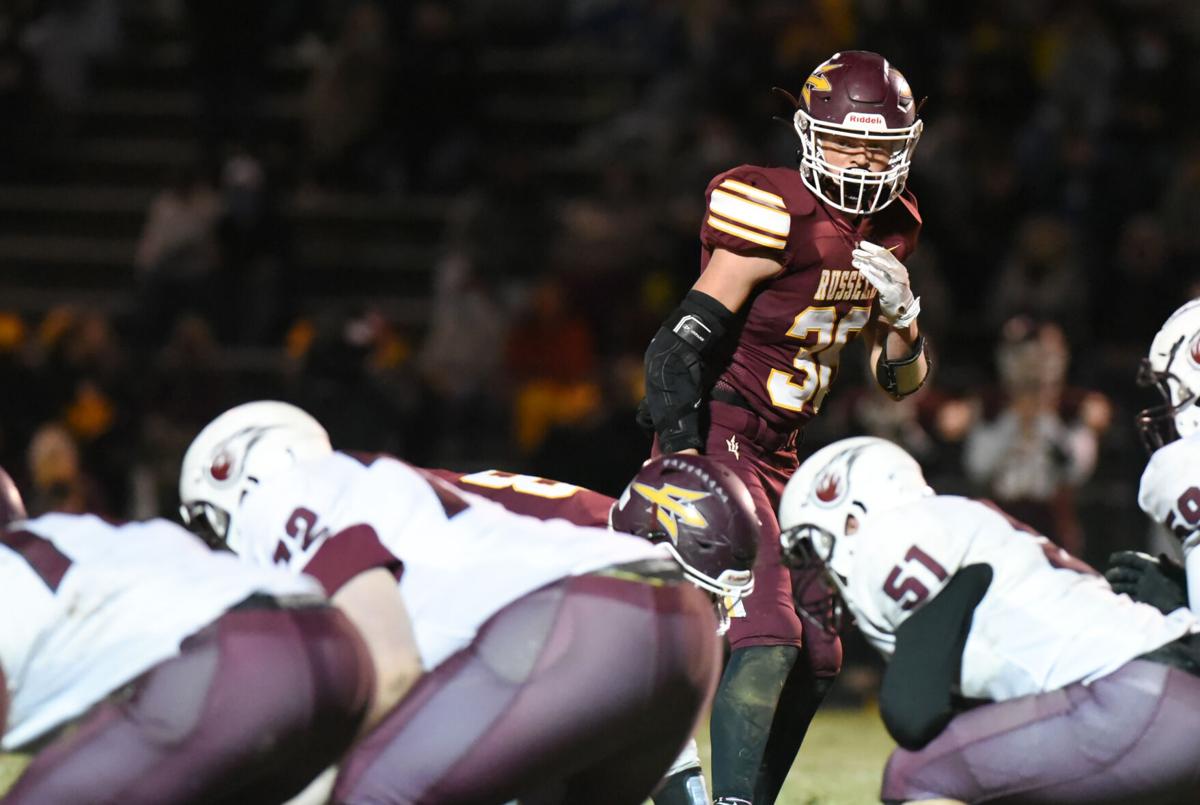 Hunter Martin of Russell looks over the West Carter defense on Friday evening at Russell. 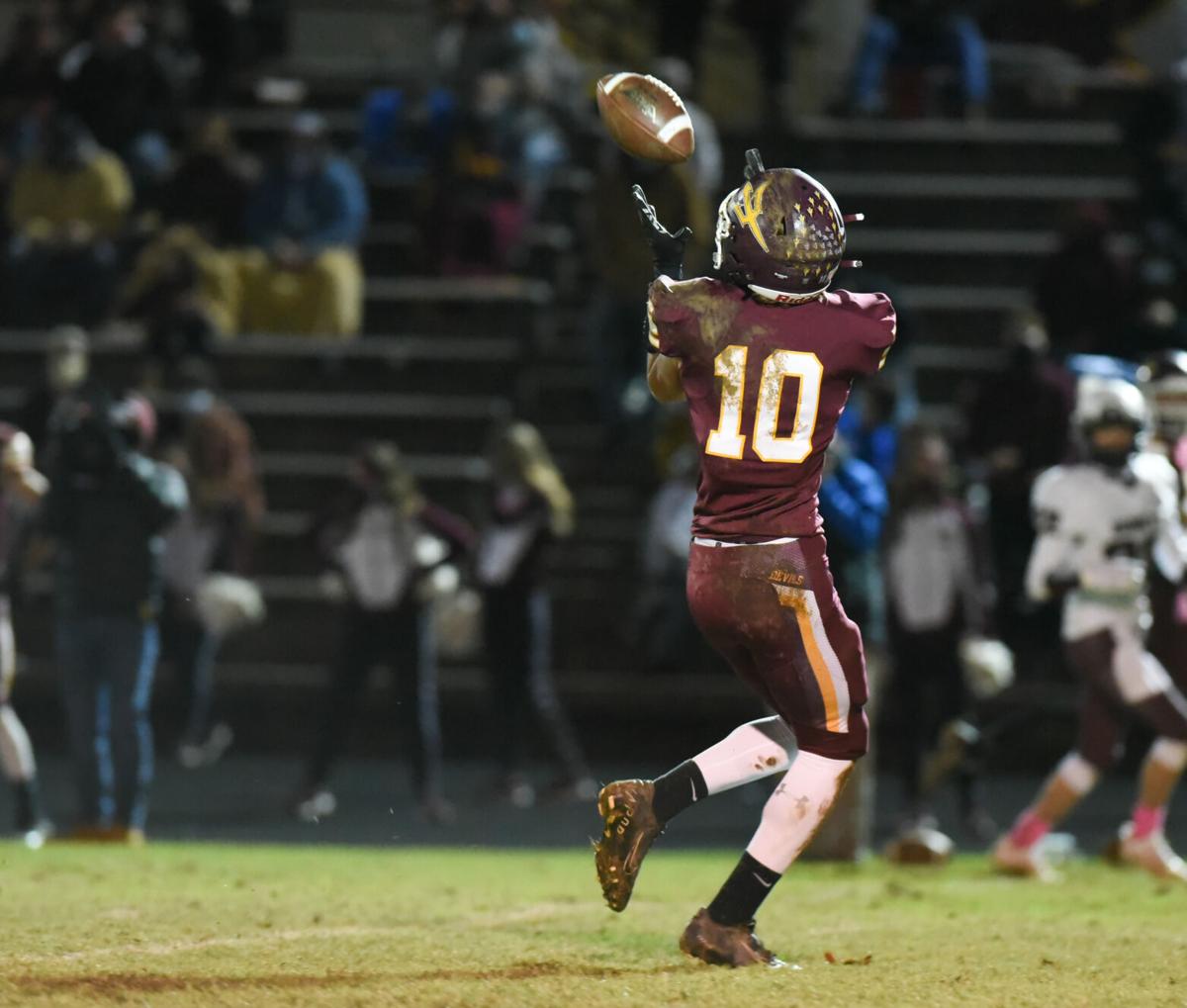 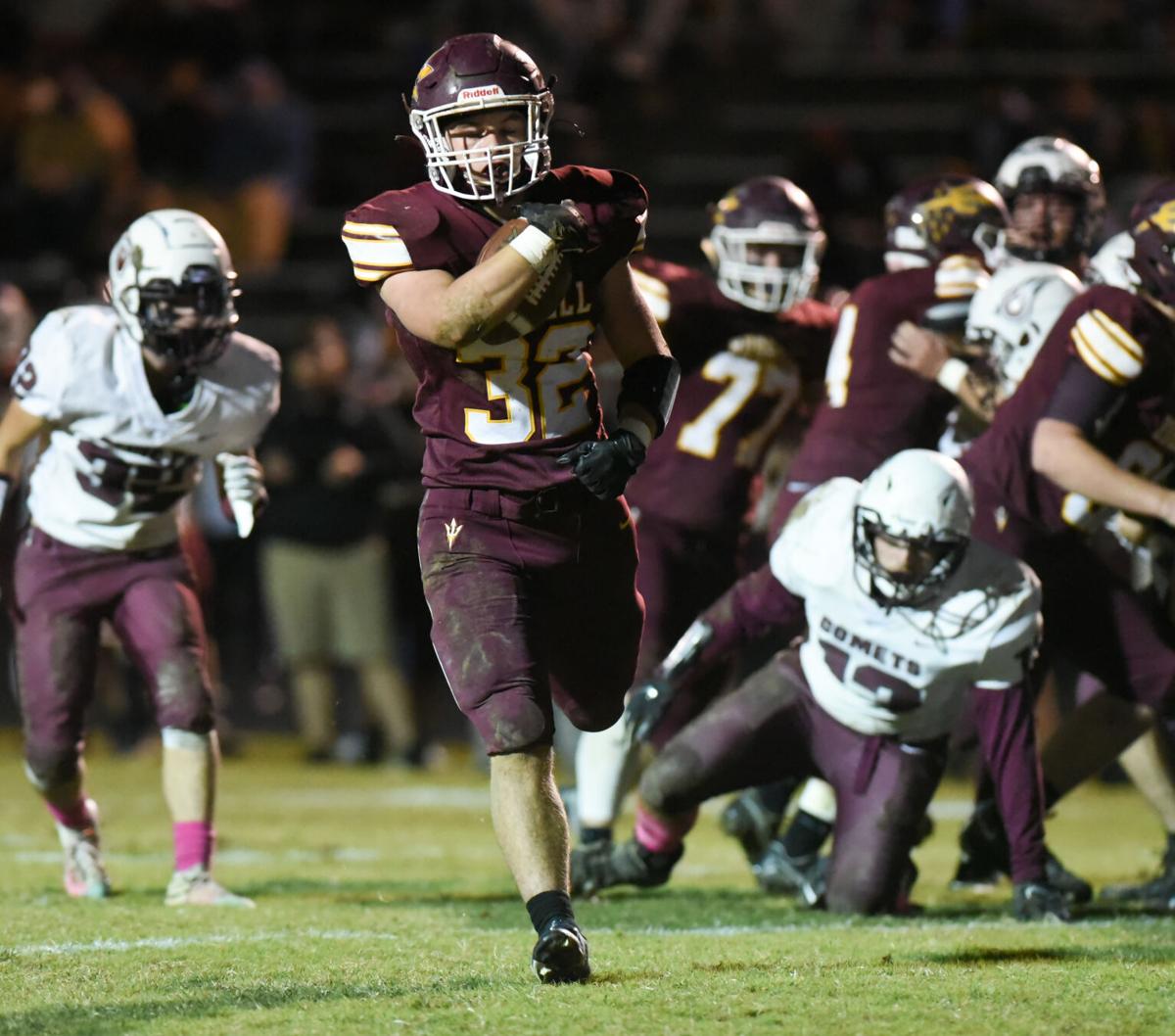 Russell's Ethan Oborne walks into the end zone for a touchdown against West Carter on Friday evening.

The full moon brightens the evening sky on Friday evening prior to the game between Russell and West Carter at Henry R. Evans Stadium.

Russell's Mason Lykins holds the football after making a catch against West Carter on Friday evening at Russell.

Hunter Martin of Russell looks over the West Carter defense on Friday evening at Russell.

Russell's Ethan Oborne walks into the end zone for a touchdown against West Carter on Friday evening.

RUSSELL The football seemed to hang in the air forever. It carried with it 27 games of futility against a former district opponent and somehow had to finally bounce West Carter’s way.

Comets quarterback Orry Perry let the pigskin fly one last time, hoping it could find its destination and end West Carter’s losing streak to Russell. The Hail Mary caromed off Jackson Bond’s hand into the waiting arms of senior Gage Leadingham for the 32-yard game-winner with no time remaining. It produced a 25-21 victory on Friday night at Henry R. Evans Stadium.

It was the first win for West Carter over the Red Devils in 28 tries.

“It means everything,” Perry said. “It sets us up with the RPI (rating). It’s really good for the playoffs. We were 0-and-27 before tonight. We are the only (Comets) team to beat Russell and nobody can ever take that away from us.”

Russell looked primed to extend the streak after Charlie Jachimczuk returned an interception 32 yards to paydirt with 1:25 remaining in the contest. It followed a fumble recovery by the Red Devils midway through the fourth frame and initiated a drive in Comets territory, but it stalled at the 2-yard line.

“There were four or five plays you could look at where we had the game,” Russell coach T.J. Maynard said. “We had the fourth-and-1 at the end going in and it’s over. If we get down on the interception, it’s over. ... If we get the onside kick, it’s over. That is why you play 48 minutes. You have to give a lot of credit to West Carter and their coaches on the job they did.”

West Carter still had time to make a comeback. Perry and company marched down the field in eight plays. One minute later, the senior found Bond, who never saw the TD pass until moments before it hit his hands, for a 23-yard hookup. Perry finished with 105 passing yards and three touchdown tosses.

“It was a great concept that coach (Thomas) Flannery called,” Perry said. “I knew where Jackson was going to be. I had a lot of pressure because they blitzed on that play. I put it up as I was going down and Jackson made an incredible play.”

The Comets recovered the ensuing onside kick and needed just one snap to get close enough for one final heave. Perry sent the final chance into the Russell sky and it landed in a crowd in the corner of the end zone. Bond got a mitt on the pass before it found the hands of Leadingham.

“The onside kick gave us pretty good field position,” Perry said. “Our guys made a really good recovery there. We have practiced hard all year long. We have all bought in and we all believe in each other. We have felt all week that it was time for this streak to end. When we got our opportunity, we took it.”

The final play was called “LSU.” West Carter coach Daniel Barker said the team runs it in every day in practice. It garners its name from the “Bluegrass Miracle” play when the Tigers stole a win from Kentucky in Commonwealth Stadium in 2002. Barker and Flannery are huge Cats fans.

“We asked our kids all week to stay with us for 48 minutes and they did,” Barker said. “They had a couple of chances to lay down, but they didn’t. We had some big mistakes tonight. They did everything we asked of them and it gave us a chance to win. We just had a couple of great plays down the stretch by our kids.”

“Russell is phenomenal,” he added. “Coming over here and winning, it is special for all West Carter people. To  pull one out against a really good Russell team, it means a lot.”

The Red Devils controlled the ball for all but seven minutes in the opening half but still found themselves tied with the Comets, 7-7, at intermission. West Carter (7-1) tallied just 27 yards of offense in the first half, but a Leetavious Cline pick and score pulled the Comets even.

“The biggest change in the second half was we were better on first downs,” Barker said. “We did a better job earlier in drives. It gave us a chance to stay on the field and try to make some plays.”

Logan Berry grabbed a 10-yard TD catch late in the third quarter, but the kick was missed and the Comets still trailed by a point.

“The held the ball and did a great job of shortening the quarters,” Perry said of the Red Devils. “We were feeling them out in the first half. Once we got a feel for what they were doing, we started running the ball pretty well. Logan and Jackson came up with huge touchdown catches.”

Russell (5-2) started the contest with a 16-play drive that ran out of steam near the red zone.

The Comets went three-and-out on their first possession to give the ball back to the Red Devils. Jachimczuk faked a handoff to Nathan Conley and the play-action allowed Mason Lykins to spring free down the field. The senior signal-caller found him for a 42-yard reception.

The play set up Ethan Oborne’s rumble into the end zone untouched for a 3-yard TD run. The sophomore would later score again in the third quarter.

Cline recorded 107 rushing yards for West Carter. Conley returned from an ankle injury to collect 71 yards on the ground.

“He got treated (on Friday) and felt good,” Maynard said. “He felt good in warmups. He’s probably about 85%. ... Hopefully, he will be ready to go next week. If he is not, it’s the next guy up to step up and make plays.”