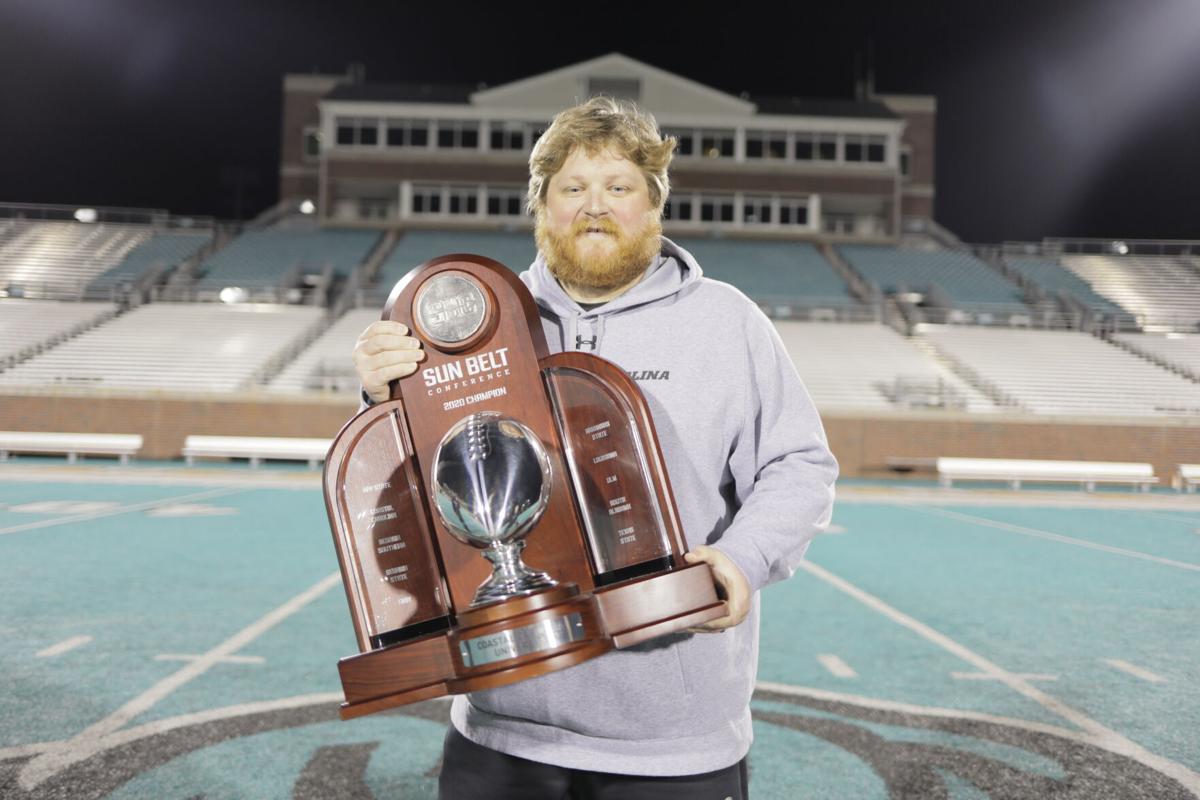 Greenup County native Brad Queen poses with the Sun Belt championship trophy after Coastal Carolina won the league in 2020. Queen is the Director of Operations and Leadership for the team. 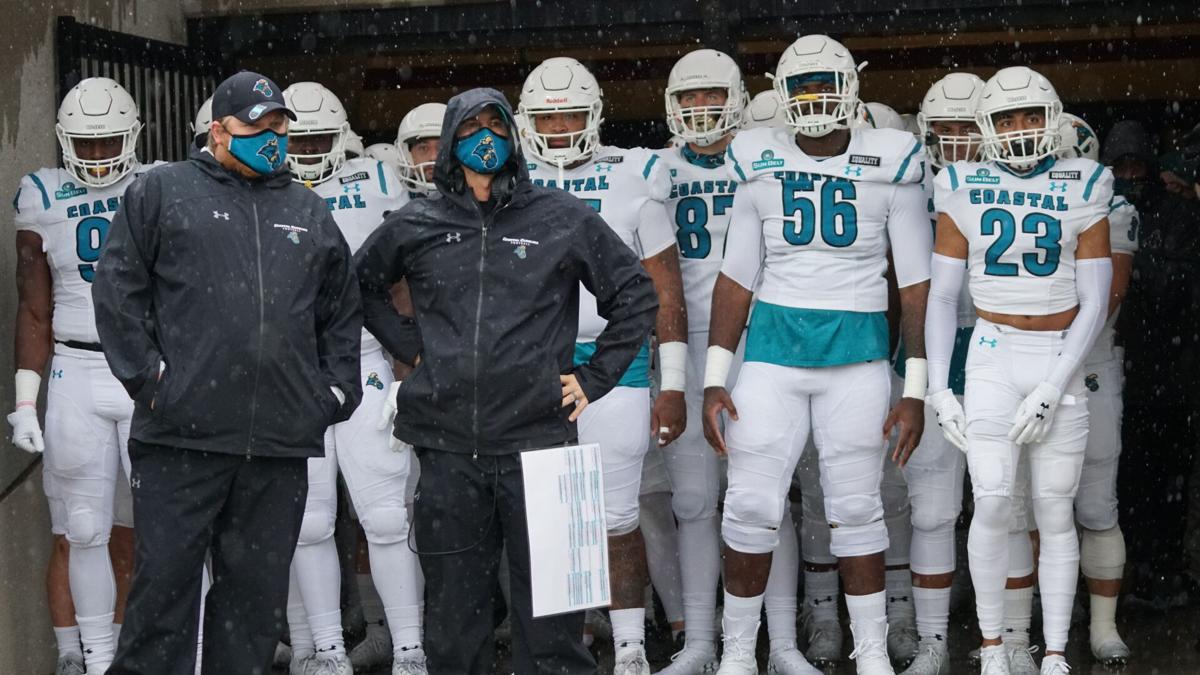 Brad Queen, left, waits with Coastal Carolina coach Jamey Chadwell before the Chanticleers take the field for a game this season. 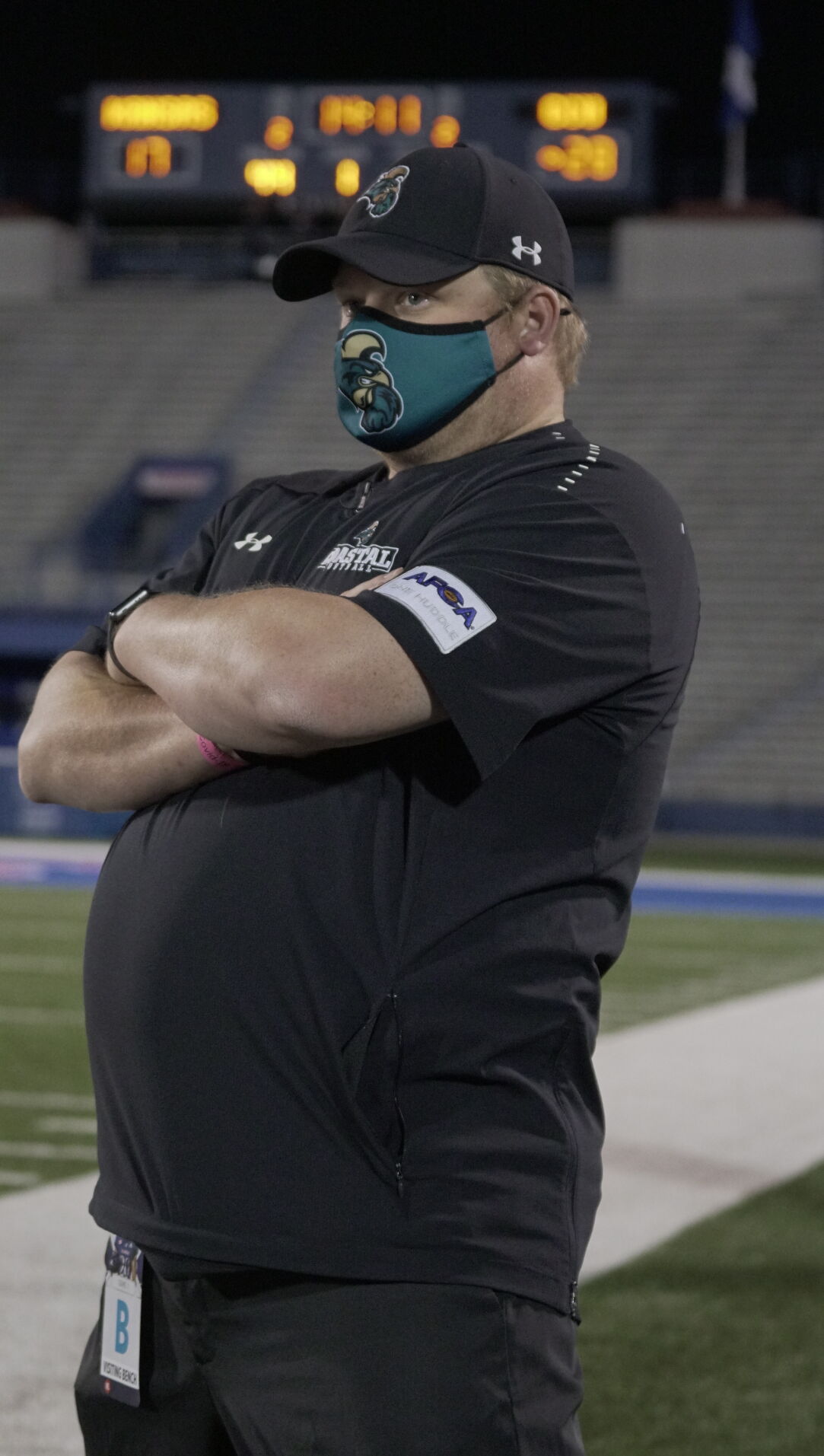 Brad Queen watches the action during a Chanticleers football game this season.

Greenup County native Brad Queen poses with the Sun Belt championship trophy after Coastal Carolina won the league in 2020. Queen is the Director of Operations and Leadership for the team.

Brad Queen, left, waits with Coastal Carolina coach Jamey Chadwell before the Chanticleers take the field for a game this season.

Brad Queen watches the action during a Chanticleers football game this season.

At first, Brad Queen didn’t know what a chanticleer was.

Chanticleer is both the mascot of Coastal Carolina University in Conway, South Carolina and a full-time 12-member male vocal ensemble. Queen, a Lloyd native, is the football program’s Director of Operations and Leadership.

And yes, Queen can now tell you what an avian Chanticleer is.

“Everybody asks me,” he said. “I know it’s from the Canterbury Tales. It’s a fierce fighting rooster that rules the barnyard.”

Queen, a 2005 Greenup County alumnus, has finished his second season in Conway, a town of about 17,000 about 12 miles northwest of Myrtle Beach. He was the assistant director during 2019.

You won’t see Queen in the press box calling plays, but he leads a group of 15 men and women who make sure the players, coach Jamey Chadwell and his assistants don’t have to worry about hotels, airlines and food.

“Brad is my right-hand guy,” Chadwell said. “We wouldn’t be able to function at the level we do if it wasn’t for him.”

Kevin Cristello, Virginia Tech’s Assistant Athletics Director and Chief of Staff and Football Operations, has known Queen some 15 years. His favorite story – a 2005 Morehead State game at Jacksonville State, when Cristello was an Eagles senior and Queen was a freshman.

“That freshman year, he broke his nose … and kept playing,” Cristello said. “Right then, I knew he was my kind of guy – a tough person who doesn’t let little things like that stop him from doing what he wants to do.”

Queen’s career also went in circles – for four years he worked in the operations department at Charlotte Motor Speedway. He followed NASCAR a little growing up – Dale Earnhardt Jr. was his favorite driver.

“I met Kyle Busch, I met Clint Bowyer,” Queen said, “but Junior was the one I wanted to meet.”

Thing was, Queen’s NASCAR knowledge was almost nonexistent at first.

“With me not knowing that much, I had to ask a lot of questions,” Queen said. “That made everybody slow down a little bit, explain why they do the things they do.”

NASCAR personnel put on the Cup races. Queen organized banquets, meetings and rides around the track the rest of the time.

“Anything that was on the track, I was responsible for, so, if you think of the speedway as a big rental facility, they have 2,200 acres, and they rent out every spot of it to people to make money,” Queen said. “It was something different every day; you got to do some stuff I’ll probably never get to do again.”

Queen discovered “stuff” is also a verb. An example: the times he drove Cup cars at driving schools.

“Somehow they fit me into it,” Queen said. “I’m a larger person, and those Cup (cars) are not made for 6-foot-2 people.”

“Once I got out of it, I knew how much I missed it,” Queen said. “I didn’t know if I wanted to go back in as a position coach or go back in a different capacity.”

Queen recalls the Chanticleers’ 22-17 win over then-No. 8 BYU Dec. 5 in Conway. It was the kind of commonplace logistical challenge in a COVID-19 world: Liberty was supposed to play that day but canceled on Dec. 2; ESPN’s College GameDay crew came to town; Queen’s staff arranged flights, charter buses and hotel rooms for BYU’s traveling party; practice times were pushed back.

“That whole week was kind of a blur,” Queen said. “What our coaches went through was unbelievable. … Beating BYU, it was a lot more fun.”

Coastal finished 2020 with an 11-1 record. The Chanticleers won the Sun Belt Conference title and were ninth in the final Associated Press rankings and 11th in the USA Today Coaches Poll.

The lone blemish was a 37-34 overtime loss to Liberty in the FBC Mortgage Cure Bowl Dec. 26 in Orlando. “It was heartbreaking for our guys,” Queen said.

Coastal’s 2021 schedule tentatively includes a home game against Kansas – the Chanticleers beat the Jayhawks in 2019 and ‘20 – and a road trip to Buffalo. Queen doesn’t plan on leaving.

“We’ve got a lot to be proud of,” Quinn said. “Right now, I’m proud to be at Coastal Carolina and happy to be with this program here. … It’s an honor to be with this team.”