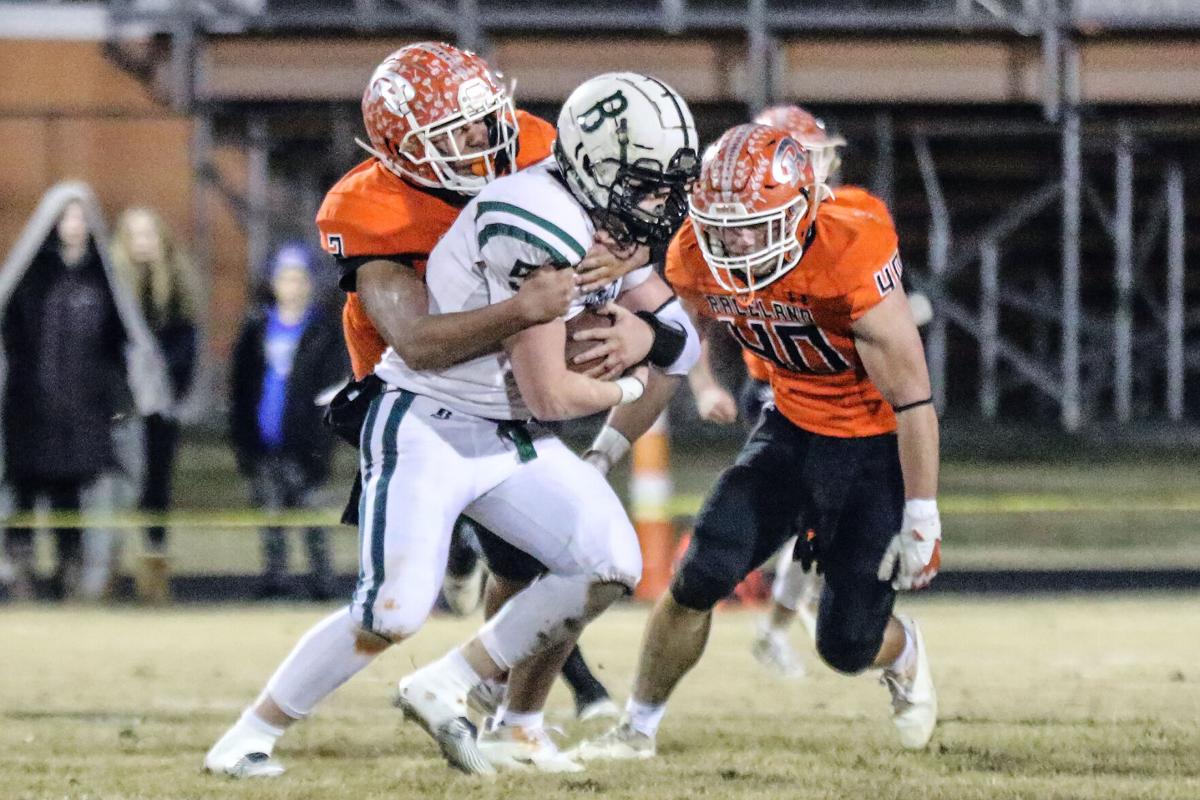 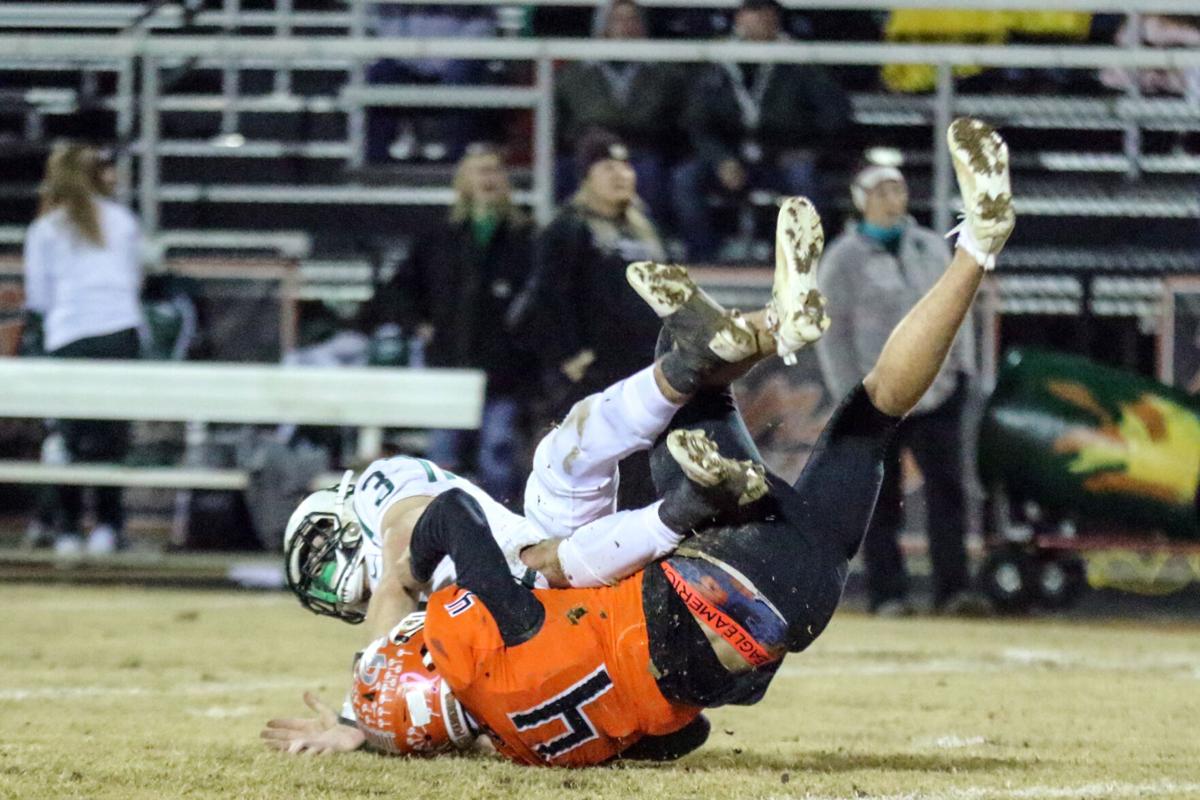 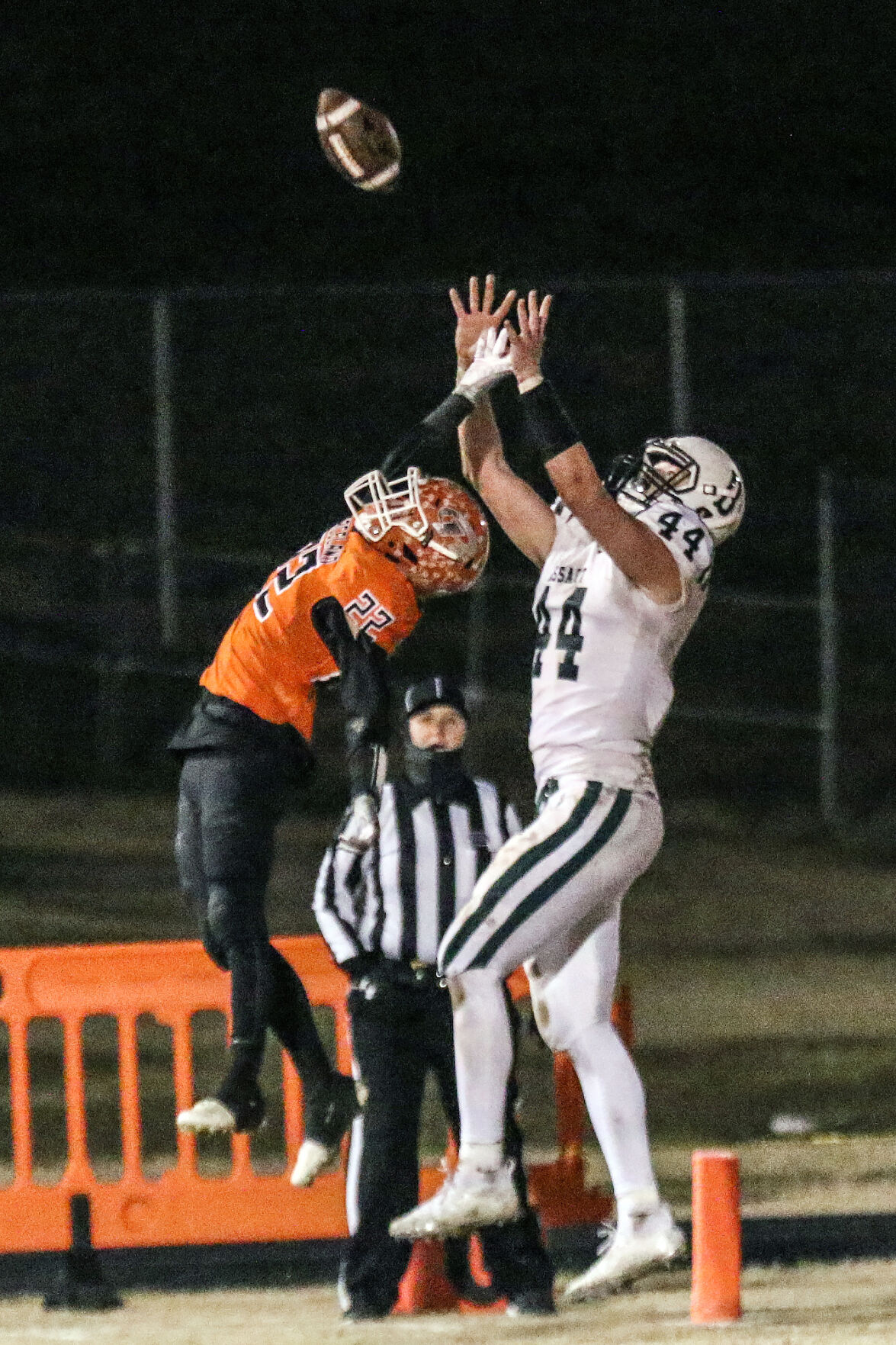 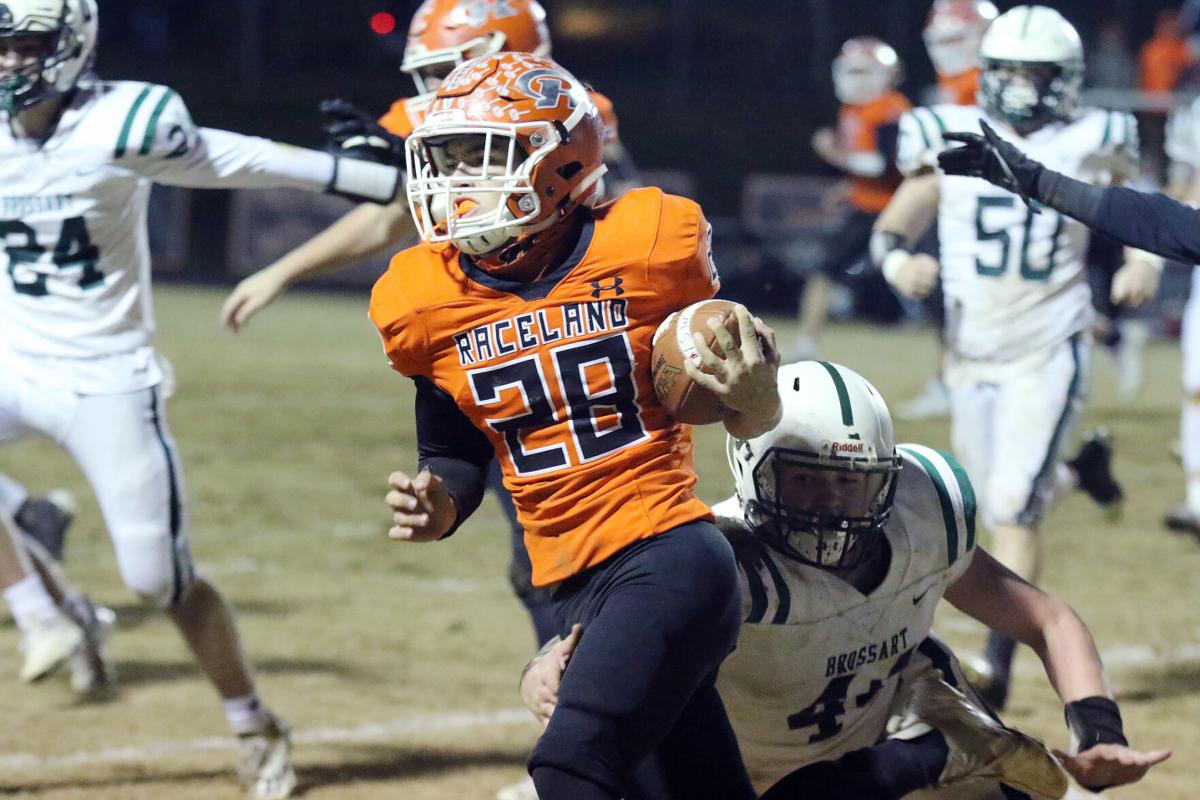 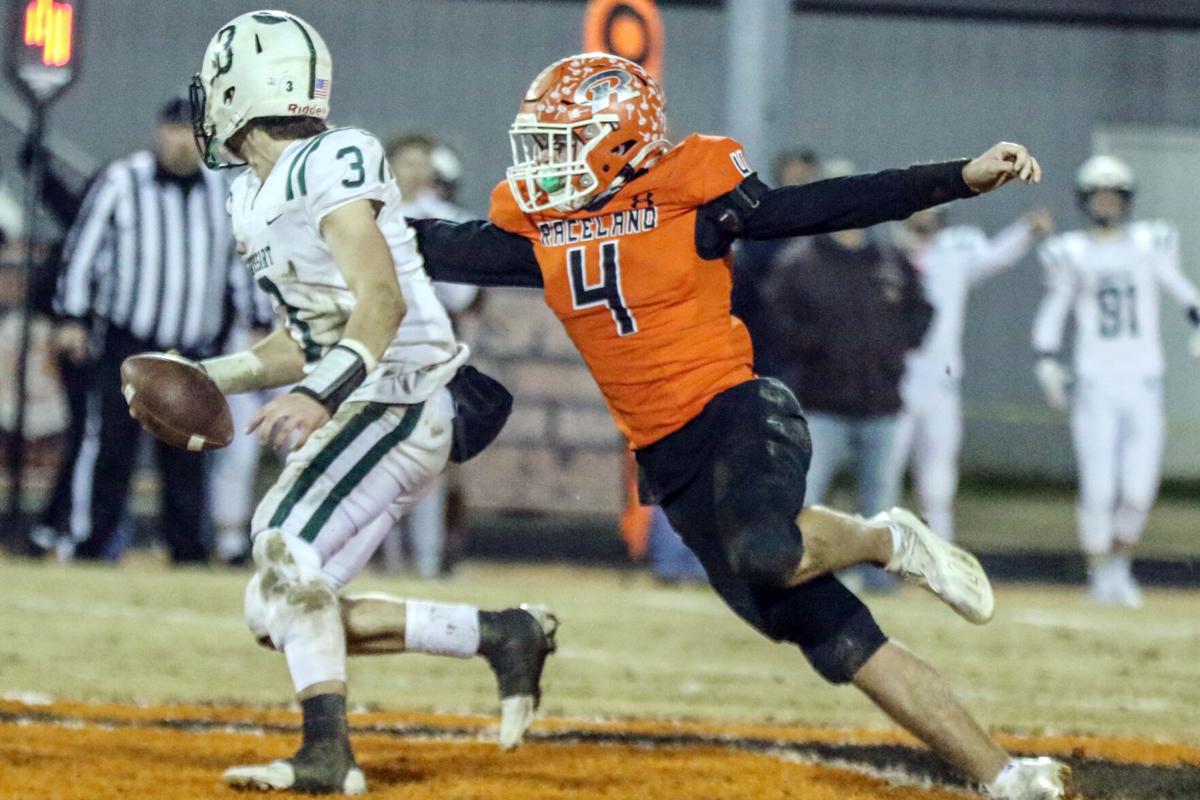 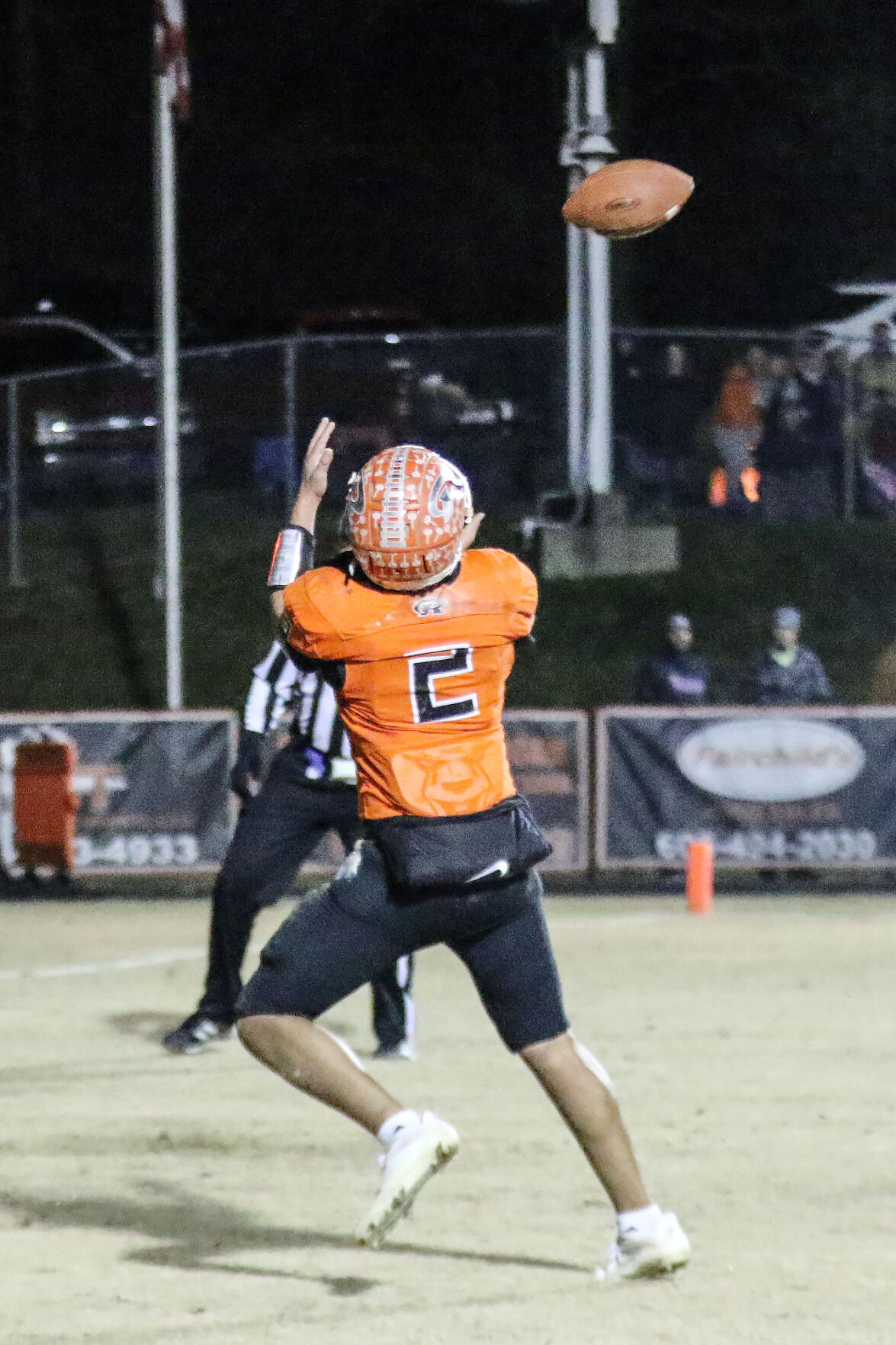 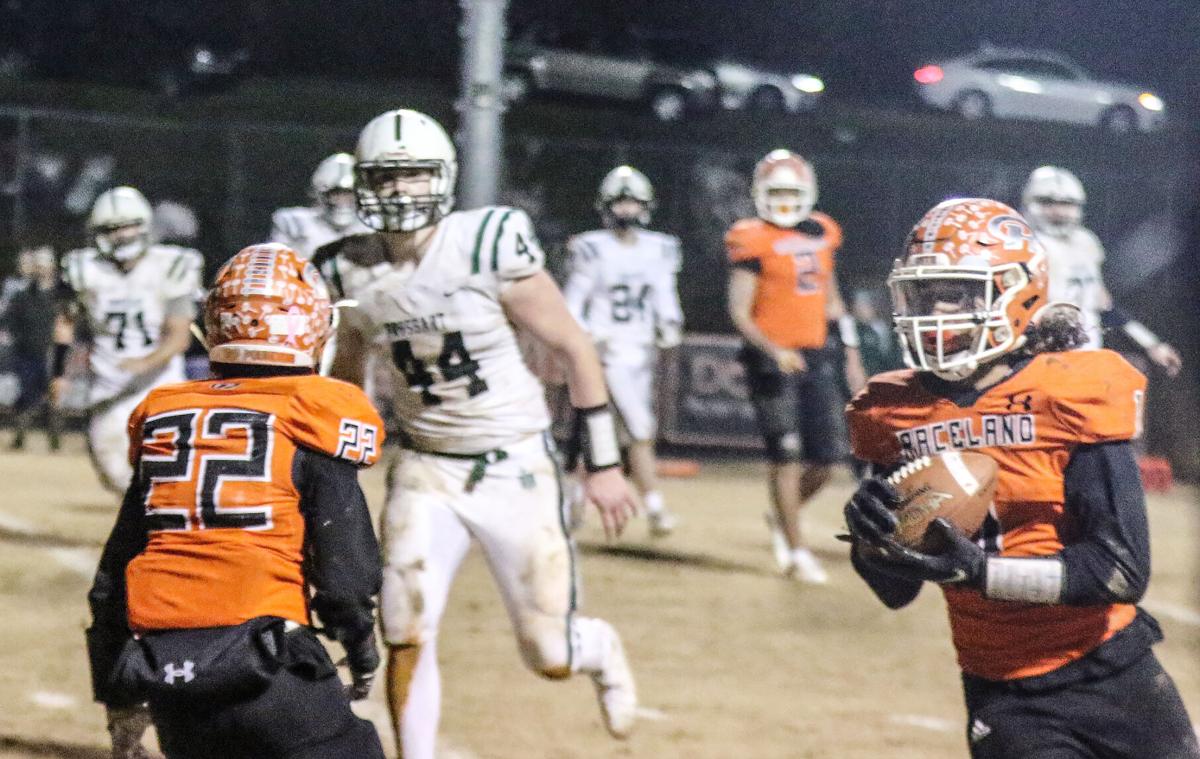 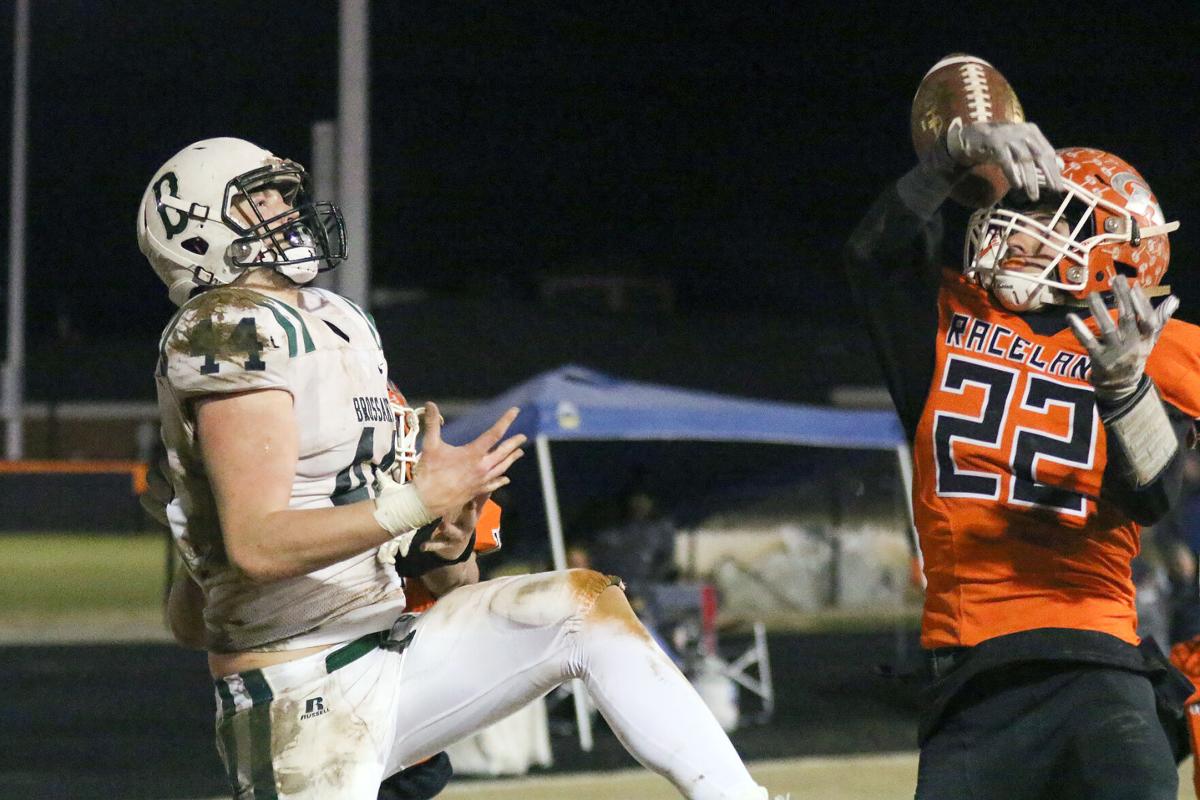 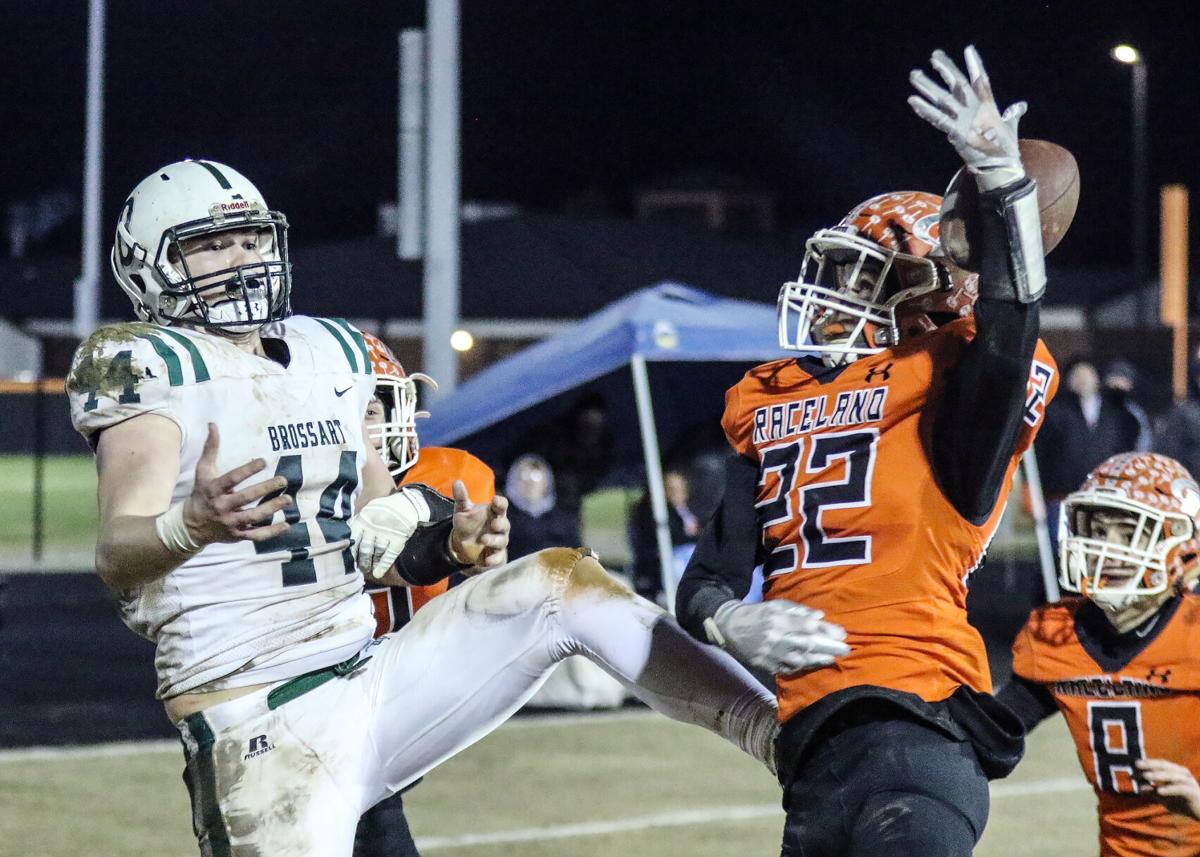 Raceland’s Landyn Newman breaks up a pass to Bishop Brossart’s David Govan as Ram Parker Fannin defends the pass and Ram Connor Hughes, 8, closes in on the play during Friday’s game. MATT JONES | THE DAILY INDEPENDENT 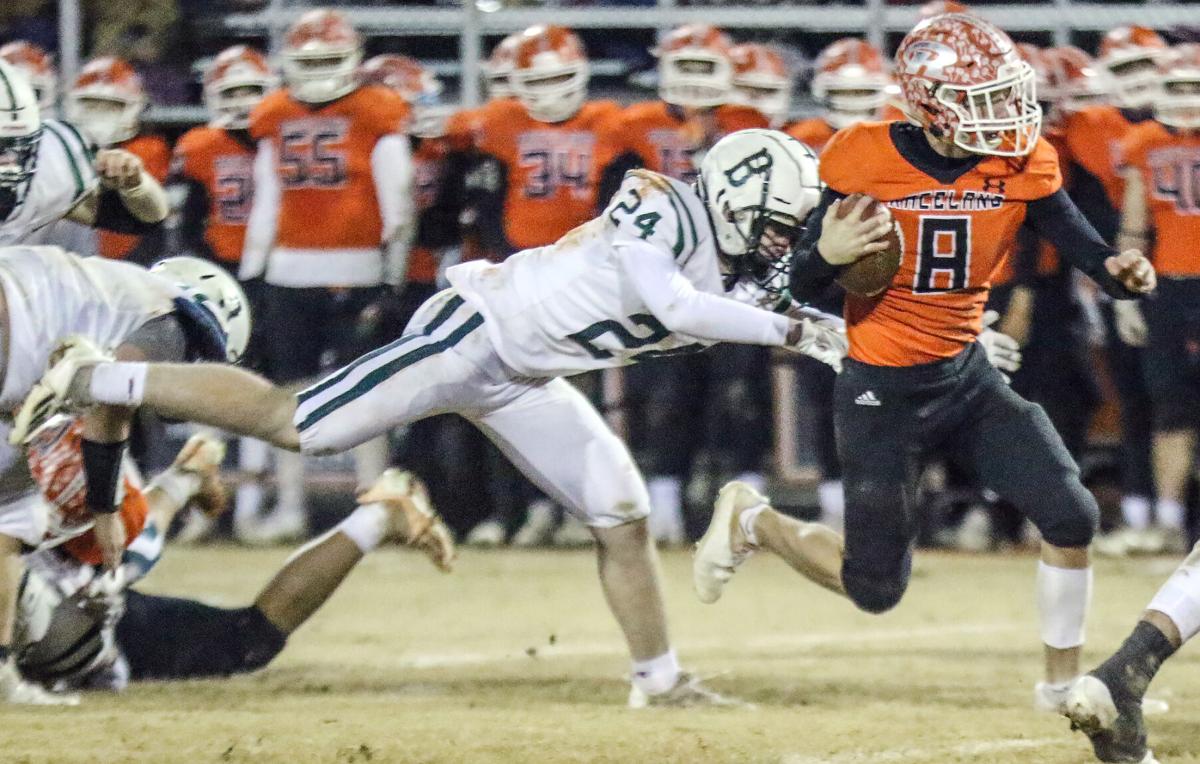 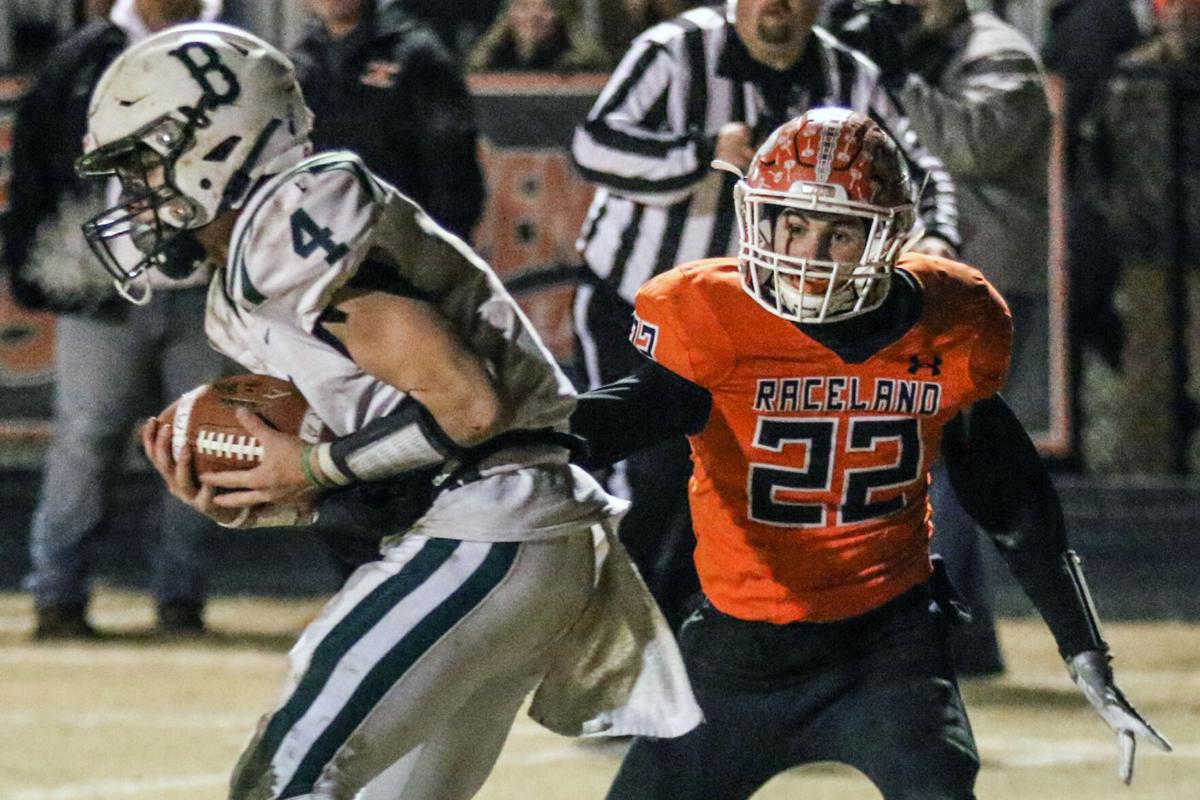 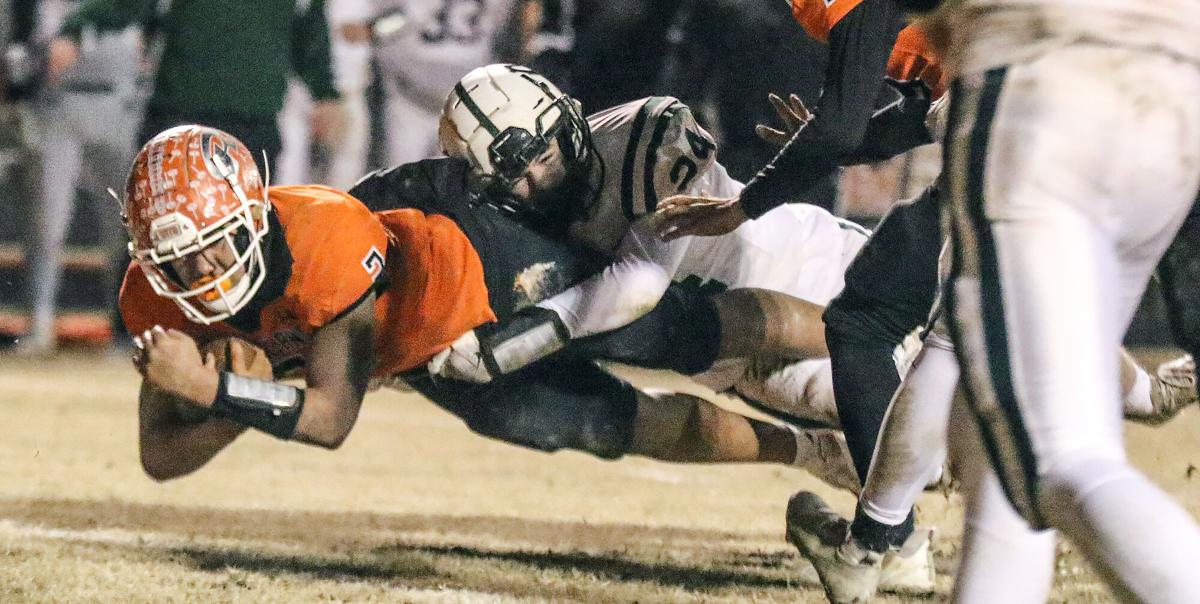 Raceland’s Landyn Newman breaks up a pass to Bishop Brossart’s David Govan as Ram Parker Fannin defends the pass and Ram Connor Hughes, 8, closes in on the play during Friday’s game. MATT JONES | THE DAILY INDEPENDENT

RACELAND The Raceland defense found more success in the Bishop Brossart backfield than the Mustangs did on Friday night.

Cole Conlon, Ben Taylor and the rest of the defensive-minded Rams gave Brossart quarterback Jacob Leicht little room to maneuver. Raceland recorded eight sacks in a decisive 48-7 victory at Ram Stadium that elevated the Rams to another region championship and a spot in the state semifinals.

“All of the defensive coaches did a great job,” Raceland coach Michael Salmons said. “Early on, we had some trouble getting some pressure (on the quarterback). We just kept coming with our body blows. We kept competing and kept going. Over the course of the game, it wore on them.

“In the fourth quarter, we were able to exert ourselves and get some licks on the quarterback,” he added. “We made them one-dimensional. When you control the line of scrimmage, you give yourself a great chance to win.”

Jules Farrow recorded a sack when he reached the quarterback untouched late in the first half. The junior said keeping the mobile QB contained in the pocket was a huge factor in the game.

“We had to stop him from running,” Farrow said. “We needed to keep him grounded and not break away for big runs.”

The Rams also applied pressure on the other side of the ball. Raceland scored on its first three possessions to build a 19-point lead. Bishop Brossart entered the Class A state quarterfinal allowing just 4.5 points a contest.

It took just five plays for Raceland to eclipse that average on Friday night.

Noah Wallace did the rest. The sophomore barreled his way into the end zone with a 3-yard scoring run. Raceland proceeded to post the most points the Mustangs have allowed all season in the opening 12 minutes.

“We felt during our preparation that there were opportunities in the passing game that we could take advantage of,” Salmons said. “It’s something we didn’t get to do last week (against Paintsville). Logan and our receivers really stepped up and made some throws and catches. The offensive line gave us time. ... We got behind them and were able to run the ball successfully.”

Wallace picked up where he left off against the Tigers. He found the end zone three more times after scoring four TDs last week in the district final.

“It’s great to run with him,” Farrow said of Wallace. “I’ve known Noah all my life and we have been running together since sixth grade. It’s always been Noah and me. We have a good connection.”

Hughes collected five catches for 144 yards in the opening half. The bulk of that production came on Raceland’s very next play.

The senior corralled a short pass and appeared to be wrapped up near the line of scrimmage. Hughes broke away from a pair of tacklers and bounced off two more. He found plenty of open space the rest of the way as he sprinted for a 64-yard TD catch.

Farrow closed out another first-quarter scoring drive with a TD scamper from 7 yards out at the 2:14 mark of the first quarter.

“I thought Jules was phenomenal tonight,” Salmons said. “He was disappointed that he couldn’t go last week. Noah had to shoulder the load. It was another part of the game plan to get Jules involved early and get him some momentum. Those guys really root for each other and they are team-first guys. They complement each other well.”

The Mustangs’ Jed Martin stopped the bleeding with a 7-yard TD catch early in the second quarter. Bishop Brossart gambled and followed with an onside kick on the ensuing play.

The visitors recovered, but the Rams defense held on consecutive fourth-down attempts by the Mustangs to slow the surge.

“Mike is a football manufacturer here,” Bishop Brossart coach Paul Wiggins said. “He is awesome at what he does with his program. We were beat down pretty bad. We knew that we would have moments and if we didn’t take care of those opportunities, we would be in trouble. We could not get over the hump.”

Wallace hauled in a 31-yard TD catch late in the second quarter after his defender fell down to give Raceland a 27-7 lead at halftime.

He added another rushing touchdown in the second half and Farrow followed with a pair to put the game out of reach.  The Rams had 414 yards of offense while giving up just 130.

“We had to forfeit the district championship game last year because of COVID-19,” Wiggins said. “We thought we may have trouble rebuilding, but our seniors just rallied. This is a big deal. We have only played football for 13 years.”

Raceland (12-1) travels to Pikeville on Friday for a state semifinal clash with the Panthers.

“It feels pretty good,” Farrow said. “I’ve never played in the state semifinals. It’s all new to me. We just have to keep pounding if we want to play for a state championship.”