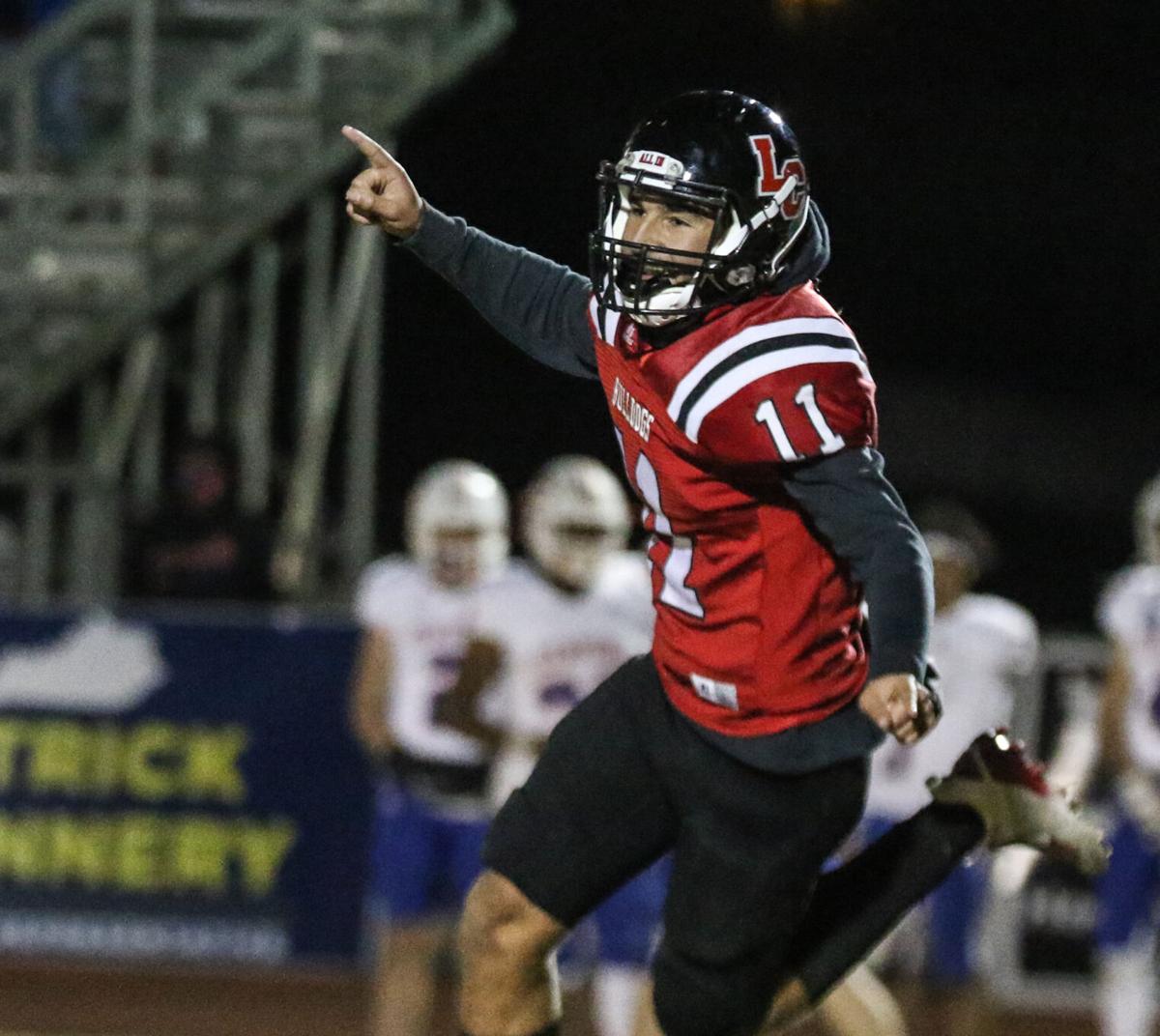 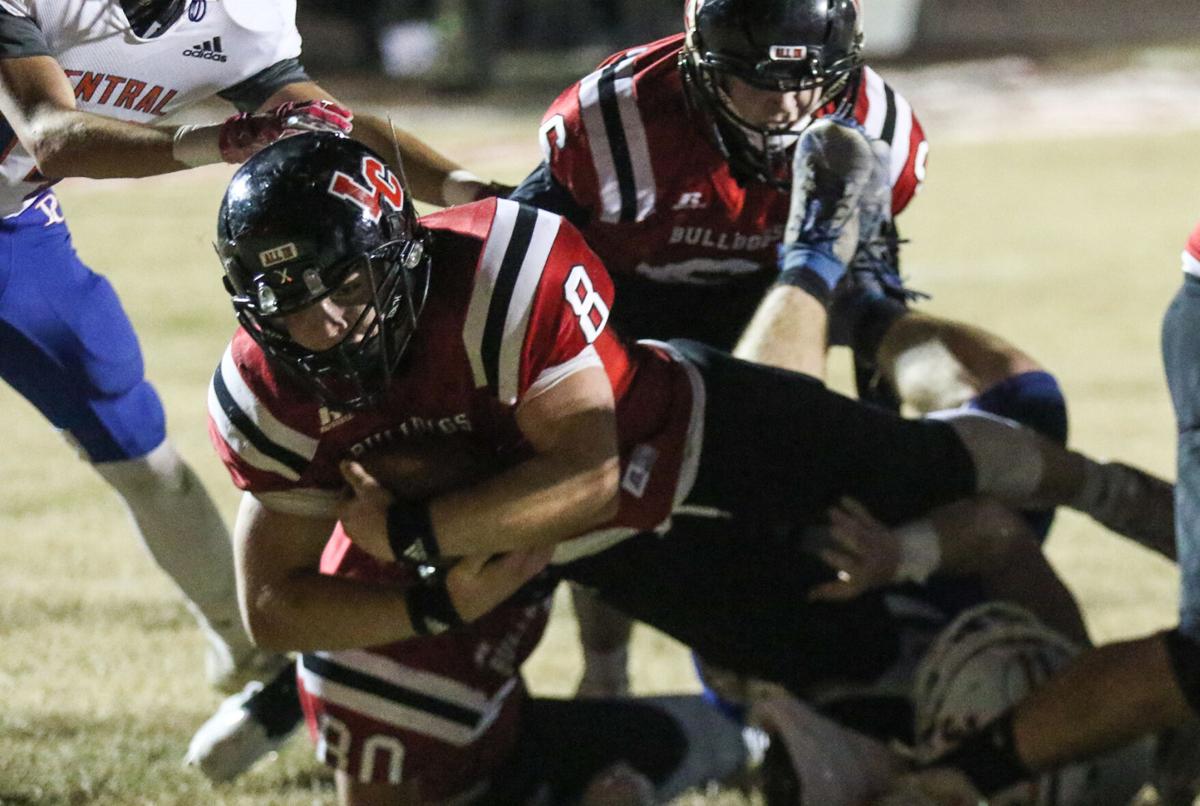 Matt Jones | The Daily Independent Lawrence County’s Dylan Ferguson finds space to break the plane of the endzone for the opening score in Thursday’s win over Pike County Central. 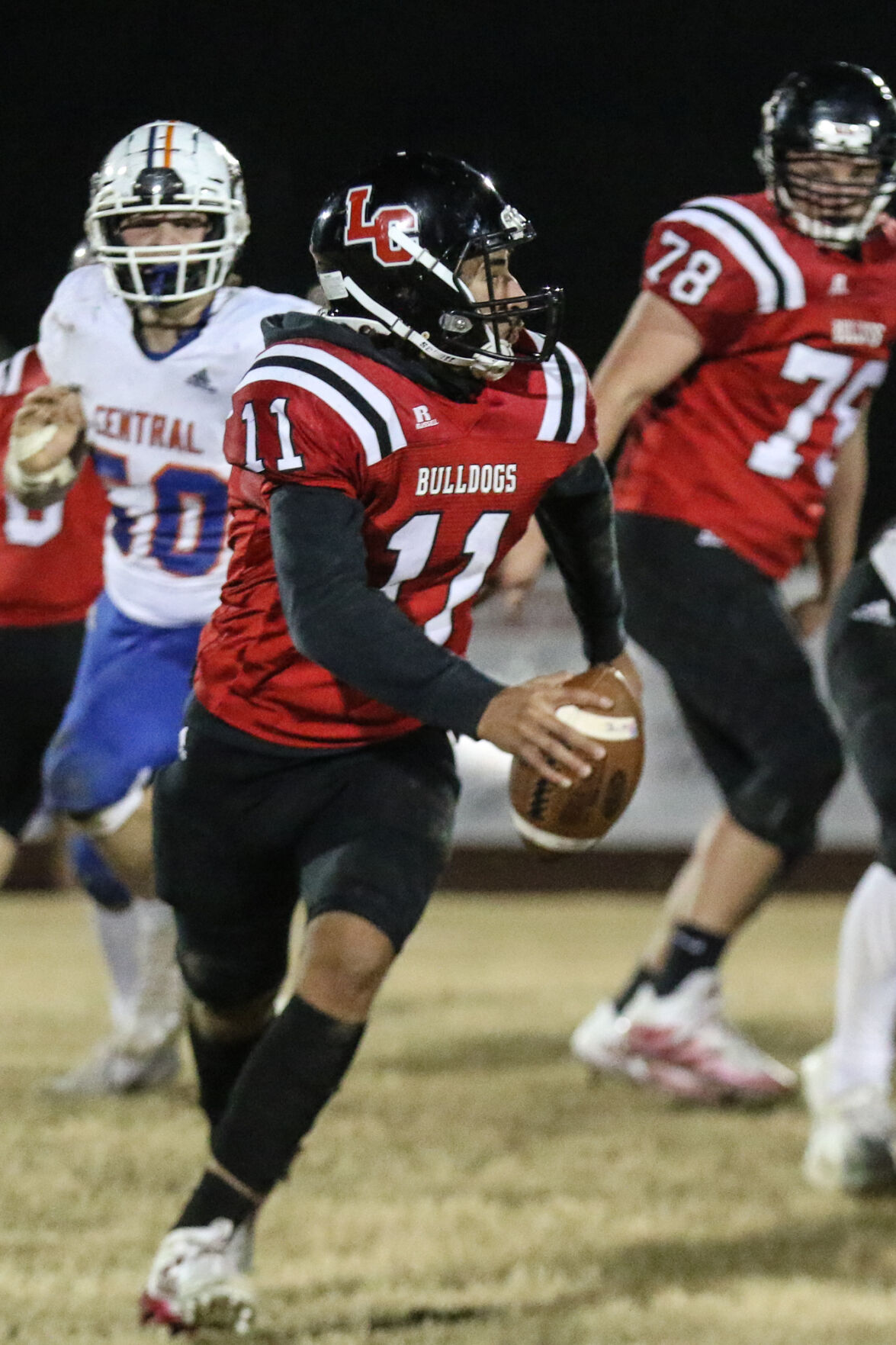 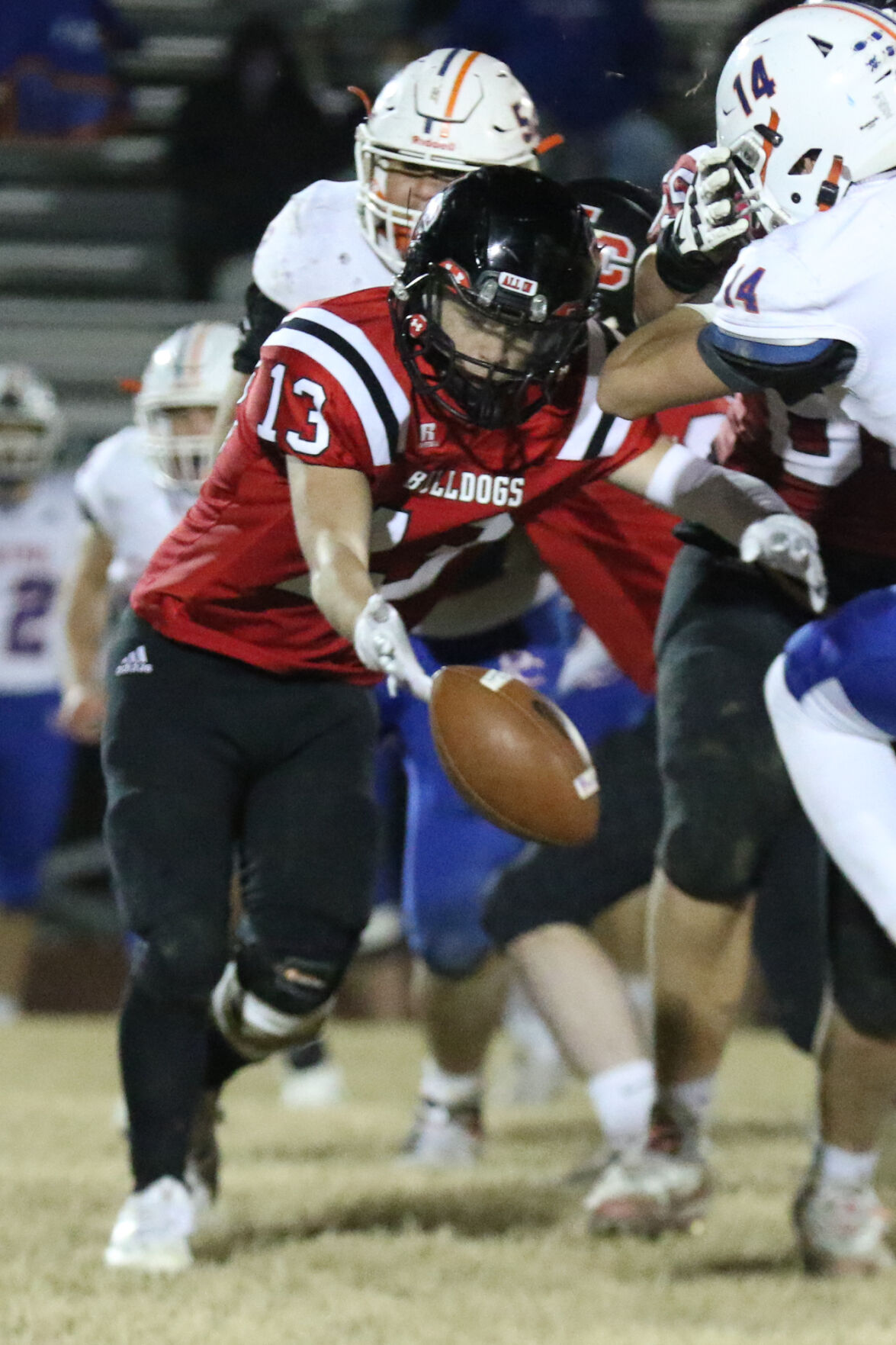 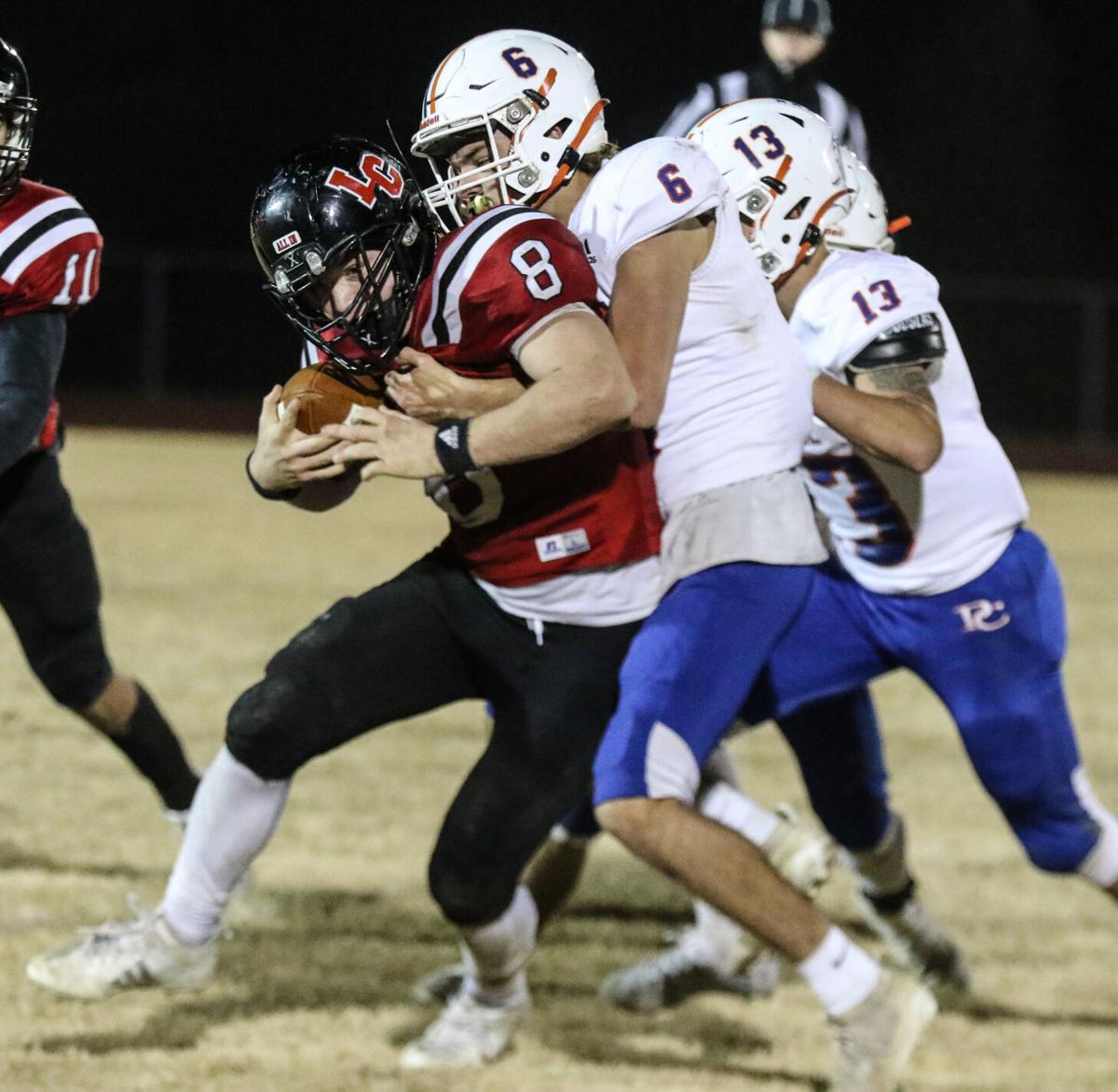 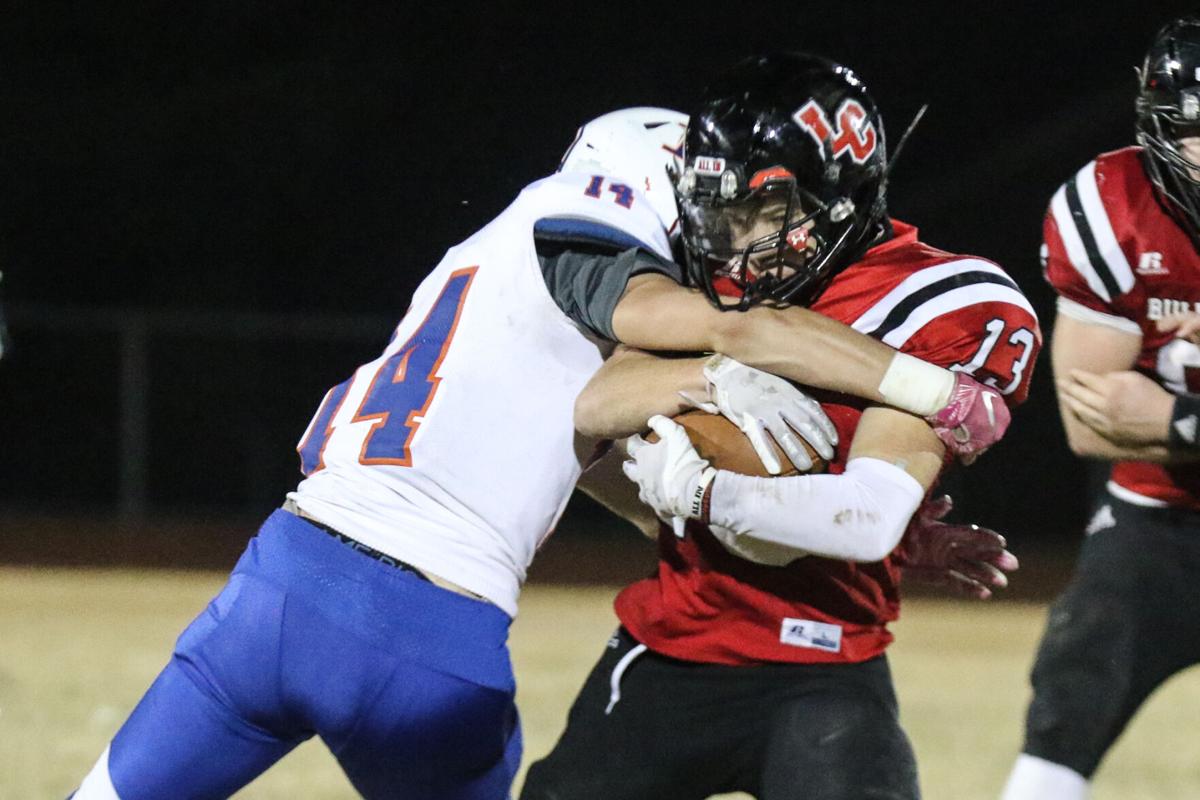 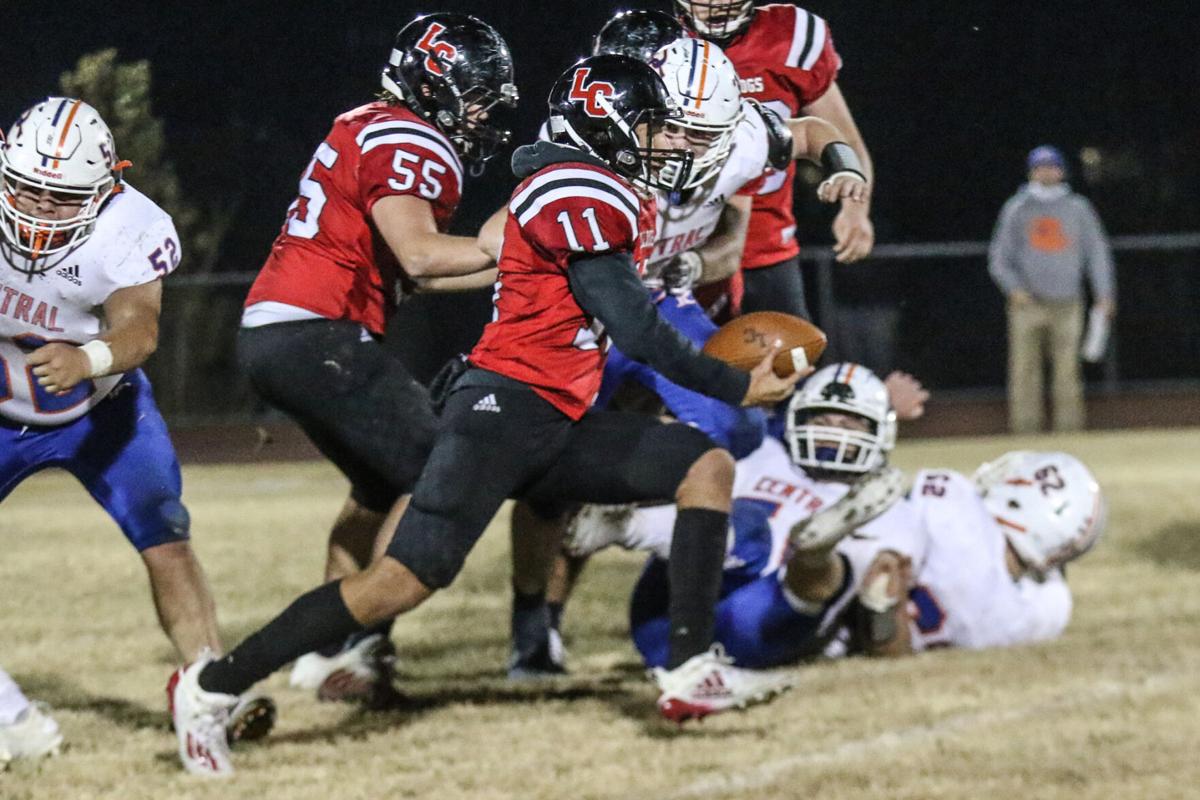 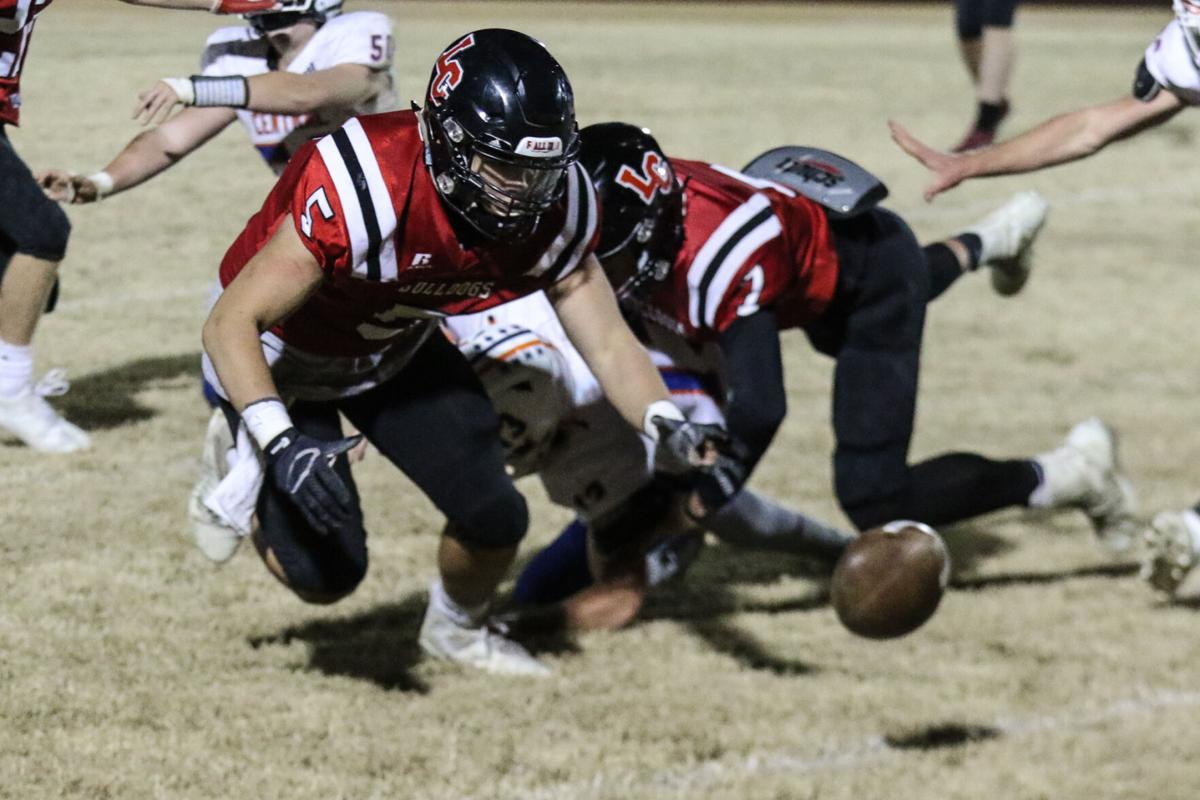 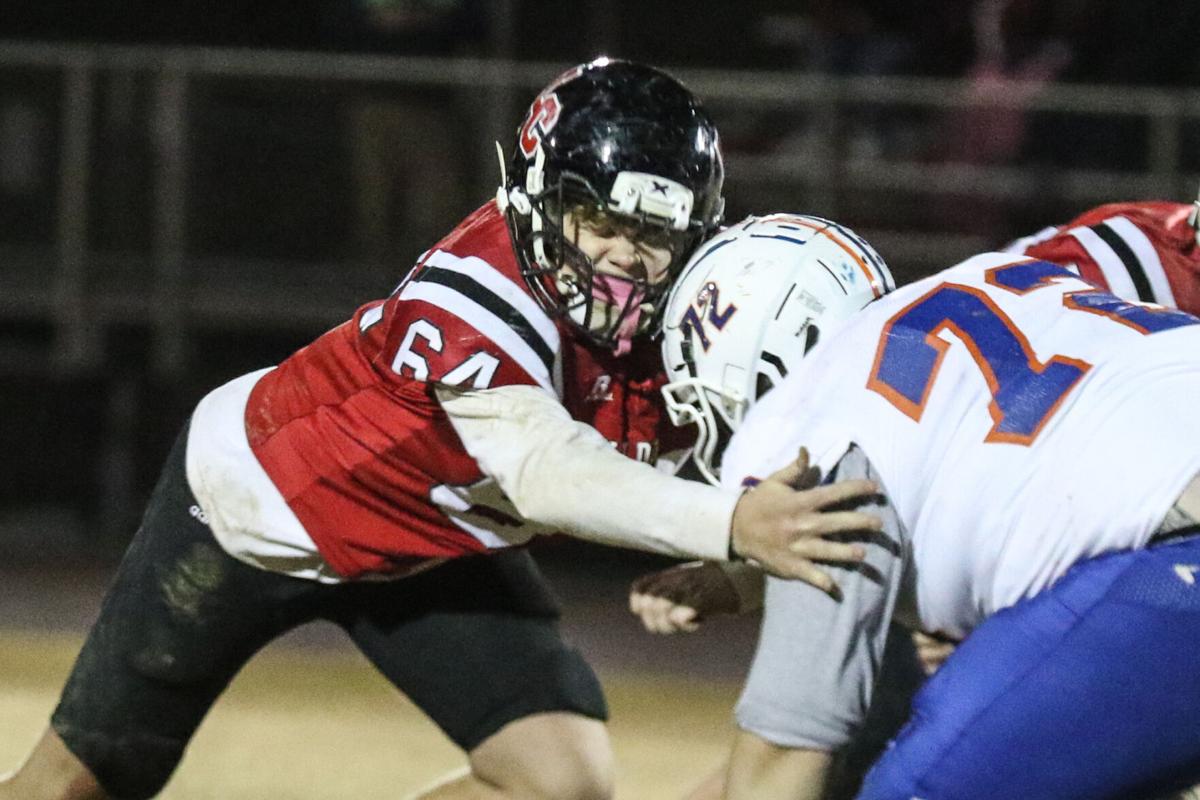 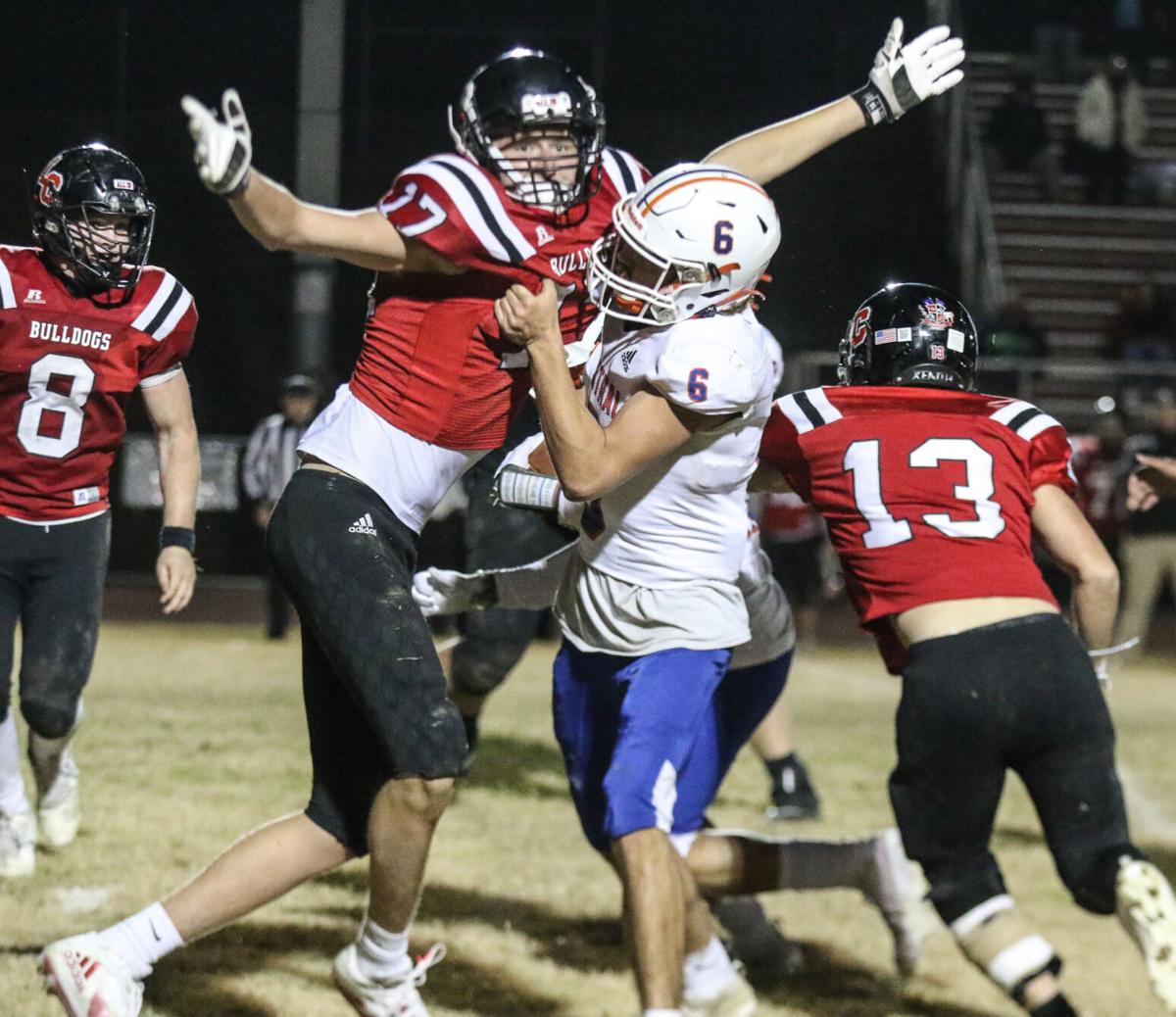 Matt Jones | The Daily Independent Lawrence County’s Dylan Ferguson finds space to break the plane of the endzone for the opening score in Thursday’s win over Pike County Central.

LOUISA A Lawrence County-Pike County Central game was coming down to a late two-point conversion on Thursday night for the third time in five years.

Bulldogs coach Alan Short admitted with a chuckle that might’ve made his blood pressure spike.

But Caden Ball had it under control.

The sophomore Lawrence County linebacker punctuated what Short called a “monster game” by snuffing out the Hawks’ two-point try for the tie with 2:15 remaining in the Class 3A, District 8 playoff opener at Luke Varney Jr. Memorial Stadium.

Pike County Central got another shot by recovering its ensuing onside kick, but the Bulldogs’ Makai Strickland recovered a fumble just outside Lawrence County’s own red zone in the final minute to preserve a 22-20 victory.

Dylan Ferguson rushed for two second-quarter touchdowns and two-pointers, and quarterback Alex Strickland contributed a 46-yard scoring run in the third quarter for Lawrence County (4-1). But the biggest plays belonged to Ball and his fellow defenders as the Bulldogs held Class 3A’s top rushing offense to less than half of its 442-yard-per-game average.

One possession before his game-saving two-point stop, Ball forced a Pike County Central turnover on downs with a tackle a yard short of the line to gain on fourth-and-3.

Lawrence County defensive coordinator Zach Botkins said he had a “discussion” with Ball at halftime to remind him to read his keys against the Hawks’ deceptive single-wing offense.

“Caden has come on,” Botkins said. “I can’t say that I knew his name before the start of the season, and we get in camp and he just starts playing lights-out with great effort, and you can’t block him. ... In the second half, he had his hand on the ballcarrier every play, whether he made the tackle or not.”

Ball said he keeps an eye on the blocking guard to see where he needs to be.

“I just follow the play,” Ball said. “I see the ball; I just go for the tackle.”

Lawrence County topped the Hawks, 29-28, on Oct. 9 on a touchdown and extra point in the final moments. Pike County Central tried to exact revenge on a playoff stage: down 22-14, they got within one possession when Keegan Bentley ran for a 12-yard score with 2:15 remaining.

Ball stopped the two-point try to tie, but the Hawks’ Aaron Slone recovered the his own onside kick at Lawrence County’s 49-yard line. A Bulldogs personal foul and three chunk plays got Pike County Central to the Lawrence County 27 inside the final minute.

But a first-down snap eluded the Hawks’ back, and Makai Strickland pounced on it with 47 seconds to play.

“This team’s a very, very good offensive team,” Short said of Pike County Central, “and to limit them in the ways that we did, that’s a feather in our cap defensively.”

Lawrence County’s two first-half scoring drives were quintessentially Bulldogs. Ferguson ran for a 15-yard TD on fourth-and-1 on the first play of the second quarter, capping a scoring drive that covered 78 yards and ate 7:50 off the clock.

And Ferguson did it again with 4:24 to go in the second quarter, plunging across from 2 yards out to conclude a drive of 5:18 and 65 yards.

The Hawks (4-5) had an answer each time, showcasing different elements of their strong running game. Bruiser Matt Anderson ran for an 8-yard score with 9:50 to go in the second quarter, and shifty Tayvian Boykins scored from 45 yards out with 2:52 to go until halftime.

Alex Strickland provided the ultimate difference with a 46-yard TD on an option keeper with 3:04 to play in the third quarter. The two-point try failed, keeping it a one-score game at 22-14.

Anderson, Boykins and Bentley each came into the game averaging more than 100 yards per game, all ranking in the top 13 ballcarriers in Class 3A.

The game was Lawrence County’s first since Oct. 23. The Bulldogs lost outings off both the front and back ends of their regular season due to COVID-19, so they were grateful to get going again Thursday night.

“This is a program-building win, we feel like,” Short said. “We felt like after not playing in almost a month that we would have some rust. It would almost feel like starting all over again, and it was in the first half.”

Hawks coach Eric Ratliff noted the difficulty of generating offense in a game between two ultra-familiar and evenly matched teams.

“You could tell by what they were doing defensively when we would make a shift, and we did the same thing,” Ratliff said. “Both teams struggled to move the ball a little bit.”