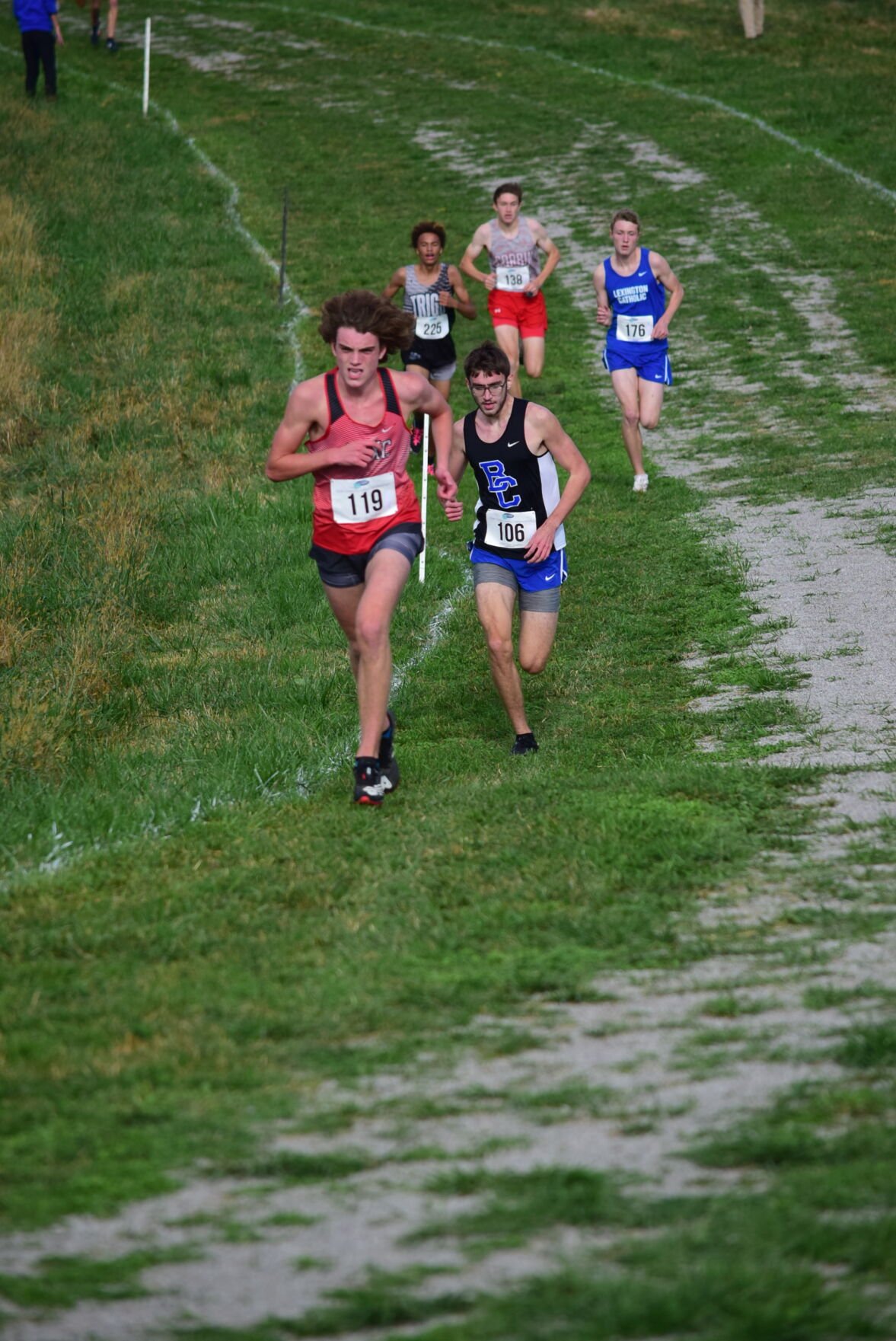 Boyd County's J.B. Terrill leads a group of runners at the Class 2A state cross country meet on Friday at Bourbon County. 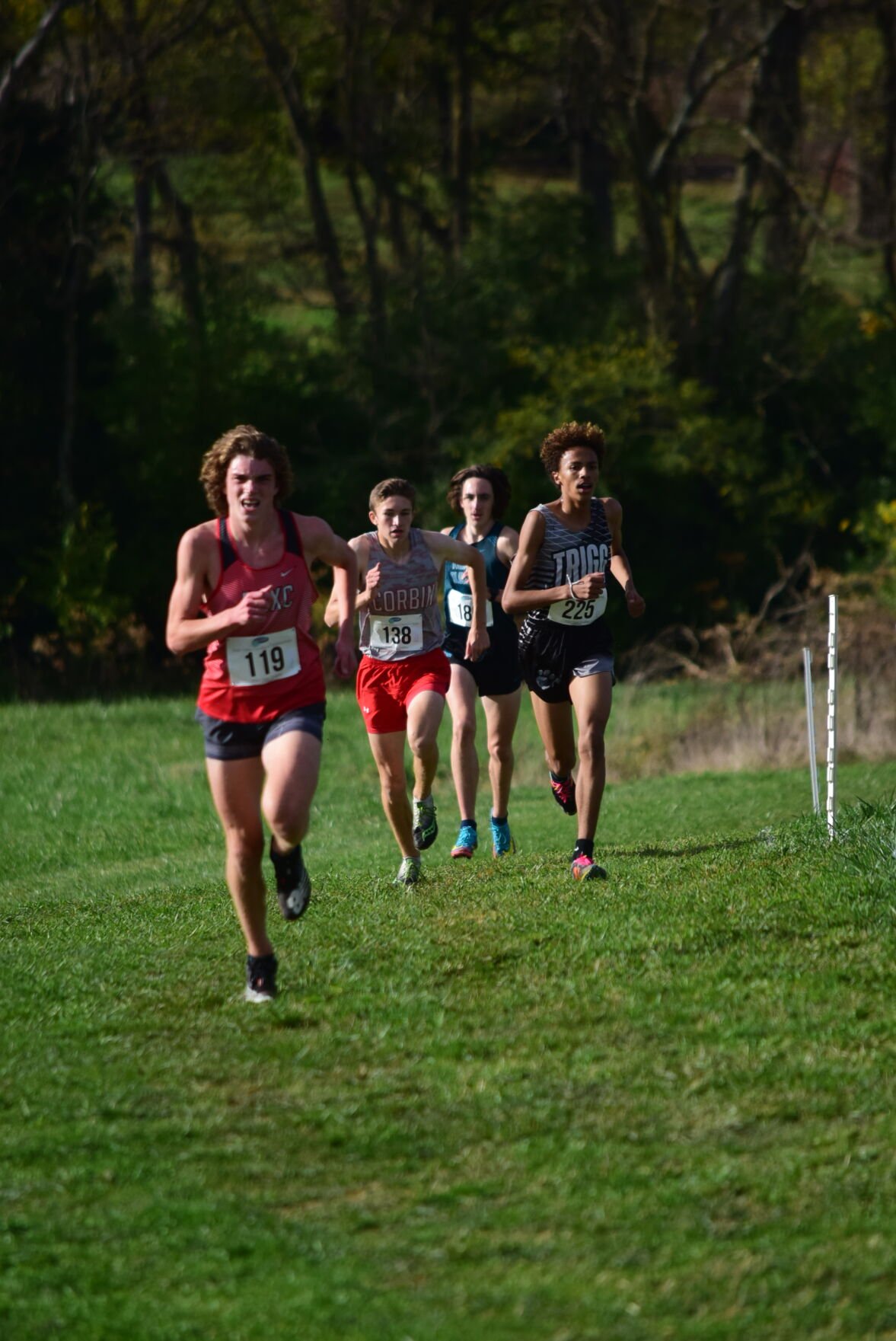 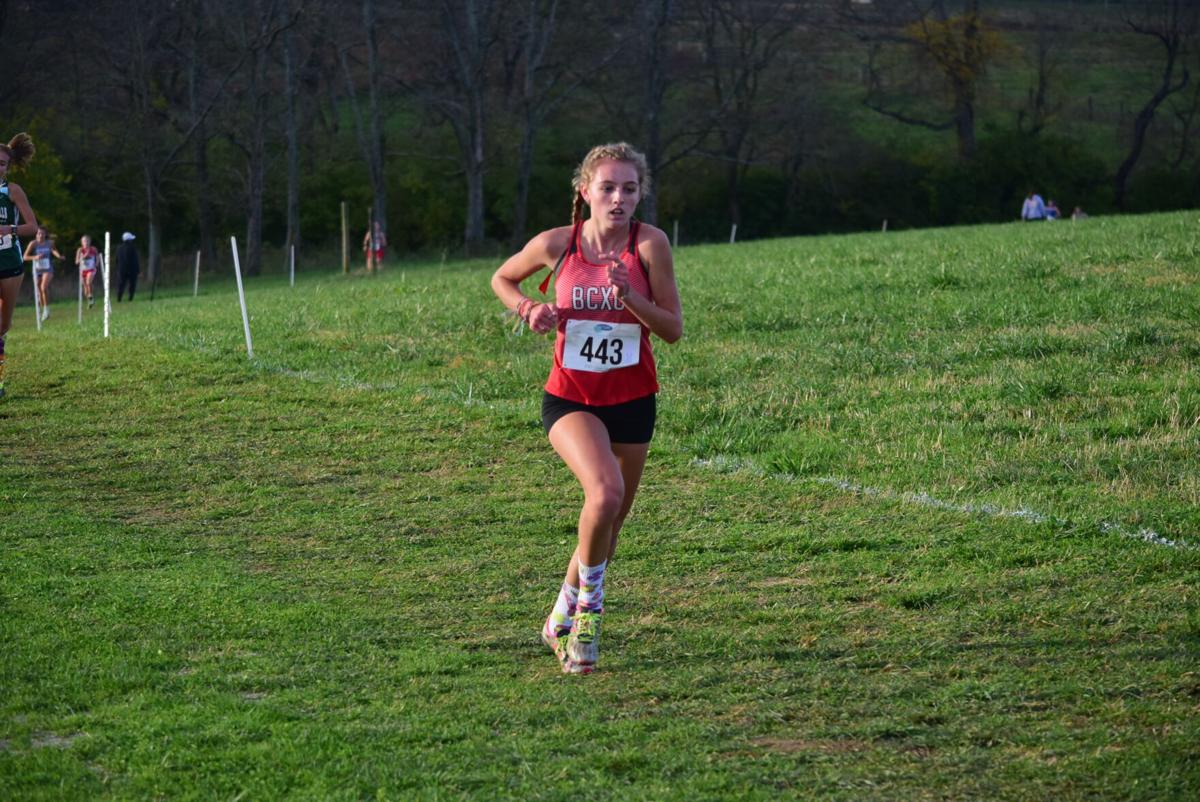 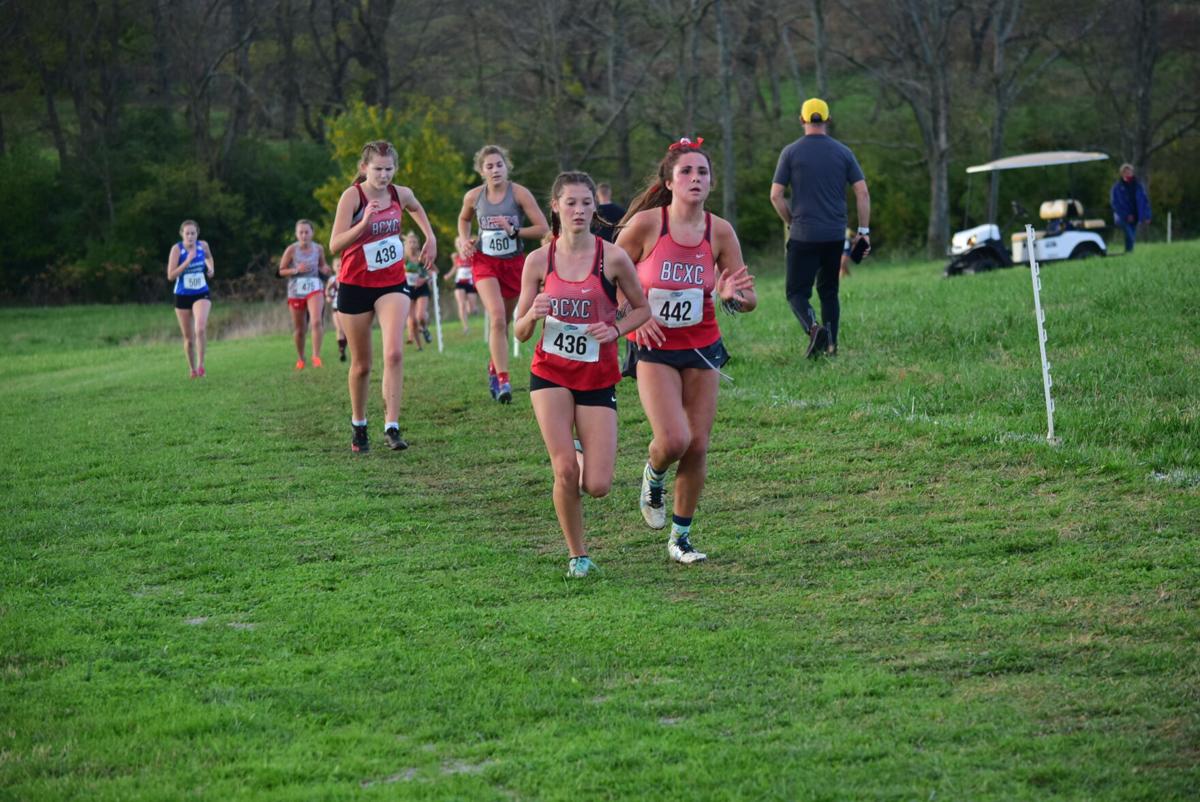 Boyd County's J.B. Terrill leads a group of runners at the Class 2A state cross country meet on Friday at Bourbon County.

PARIS It was a new course, but the story was the same.

After the Kentucky Horse Park had hosted the KHSAA state cross xountry championships for years, circumstances surrounding the rules and restrictions related to Covid-19 forced the event to move to the a recently-created venue, the Bourbon County Cross Country Course.

Despite the change in location, the result for area runners remained the same.

Boyd County brought home two top-five team finishes and had both a boy and girl runner each place in the top six to lead the local contingent in Friday afternoon's Class 2A championship.

Yet, the Lions and Lady Lions accomplished that feat without having run on the course at any point this season.

"(Because) we had not run this (course) before, we were kind of going in blind, just looking at maps that we had been given, and just from what we'd heard of the course," said Boyd County junior Sophia Newsome. "So, I think the strategy was just to hold on; just pick off people as we go and just take certain corners certain ways, stride out on the downhills and the flats, and just maintain up the hills."

It seemed to work as strategy for both Boyd County teams as according to best available KHSAA records, the Lions and Lady Lions put up historic performances, both individually and the teams. Junior J.B. Terrill's third-place finish is believed to be the best in school history, while Newsome's sixth-place is the best since 1987 when Paula Kelly was the Class 3A state champion. In addition, the Lions' fourth-place team result is believed to only have trailed the runner-up performances in each of the last two years, while the Lady Lions' fifth place was the best since the team was runner-up in both 1983 and 1986, and one spot ahead of the 2012 team's sixth-place finish.

After 41 years at the Kentucky Horse Park, new rules forced not only a venue change, but the races would start in three waves. Who ran in which wave was determined by team and individual finishes at the regional meets.

"There's not as many hills in this one than as the horse park, because the Horse Park is just all hills from the start to the finish," Newsome said. "There were one or two hills in this one, but this one was actually faster because there were a lot more downhills. So, you had that time to recuperate leading up to these big hills and you had some flat parts. So, they are very different courses."

Despite not having run on the course, Boyd County was not completely unfamiliar with it.

"We got to walk the course beforehand, which definitely helped, just because we knew there were going to be some rough spots or some muddy spots," Terrill said. "But I think I ran this course the same as I do a lot of courses with tough competition. I try and just stay with that top group until the very end and then just bust it out at the end. It seemed to work today. I know there were a couple of kids that were close to catching me, but I think I held them off."

"I knew there were a couple of kids ranked ahead of me based off region time, so my main goal was to try to stay with them, and then if I could, beat them at the end. But unfortunately, they took off way before me and I knew I couldn't really hold my spot with them and be able to finish strong. So, I just had to (hold) back with the group right behind them," Terrill said.

Terrill held among the lead group for most of his race, but a late surge pushed him to second in his wave. A runner in the second wave posted a faster time resulting in Terrill's third-place finish.

"We were hoping for runner up or maybe even state champ," Boyd County coach Becca Chaney said of Terrill's race. "He tried as hard as could. He killed that last part and finished strong and that's where he got to hold that solid two spot in our wave."

"Coming in, I wanted to go a little bit slower at the beginning. That didn't really happen. The first mile or so was really fast, but it was mostly downhill, so it made sense. Around the hills, I tried to get people on those and then use the downhills as like rest sort of," he said. "Close to the end, I passed three or four people. I tried get there at the end and then sprint to the finish."

North Oldham captured the boys’ team title after scoring 78 points. In a close race for the next three spots, defending champion Corbin took second with 133 points, followed by Webster County in third with 136 points and Boyd County in fourth with 137 points.

"In that race in the past two years, (scoring) has been that close. So, this year I think the boys battled. I think they ran as hard as they could today with this new course," Chaney said. "I was very proud of them to come out with fourth place this year, because of all of the things we'd had to go through (and) the limited races we've had this season."

It was the Lions' fourth straight top-10 finish and the eighth consecutive year it qualified as a team.

"I think all of them stepped up today. Spencer (Elswick) ran hard at the end. Gavin (Brock) ran hard at the end. Mason (Newsome) was there, and Hudson, (did well) for his first state meet," Chaney added. "And of course, we had two veterans Waylon (Smith) and Grant (Chaffin) back there in the back … . They just ran a good team race and they battled hard to get up to where they were."

Thomas Nelson's Lane Hoyes won the boys' race in 16:21.97, narrowly beating Western Hills' Griffin Staude, who ran in a different wave. Staude finished in 16:22.04. Terrill was able to hold off a late surge from Bell County's Caden Miracle, who placed fourth in 16:43.55.

In the girls’ 5K event, a year after finishing 22nd and 24th respectively, Newsome and Rowan County freshman Autumn Egleston posted podium finishes. Newsome jumped all the way to sixth, covering the course in 20:09.63, while Egleston captured 15th in 20:48.80.

"I think from the start I was in the top 10, and then when we got to the first mile, I was top five. And then I just stayed there … and I just hung on up there with them from start to finish," Newsome said. "I am very happy with what I did ... I was expecting top 10. I was hoping to get up there, but getting sixth that blew my mind. I'm super proud with how I did and how my team did, too, overall."

Egleston was also pleased with her race.

"My strategy was not to try to out-run everybody at the beginning, but just pace myself with the first group. I wanted to start making a move around the 2-mile marker, because that's when it would be very effective," she said. "By the first mile, I felt like I was in a place I needed to be and the pace I needed to be, and very comfortable to get the time I wanted. That was the point where I wanted to start to pass people. As soon as I hit the two-mile (mark), I just wanted to pace with people then catch them at the three-mile (mark and) at the finish I felt pretty strong.”

Chaney was impressed with the improvement Newsome made from last fall’s meet.

"For her to jump from where she was last year to sixth place this year (was great). I know she finished fifth in her wave, but there was one that got her in the second wave,” Chaney said. “That's the other thing about these waves. We just have to battle in our wave and hope for the best. But she's improved tremendously in one season, too. And (it) was just (a) very solid run out there for her."

Boyd County’s girls improved by four spots over their 2019 state-meet finish by placing fifth with 148 points. Christian Academy of Louisville won the competition with 97 points. Highlands took second with 112 points, 2019 champion Scott was third with 125 points, with Mason County capturing fourth with 132 points.

"The girls, last year we finished ninth and we were so excited just to break into the top 10. These girls, they've come together. They've come so far this year and they were wanting that top four (finish),” Chaney said. “A lot of them are disappointed and I don't know why. They're fifth place. They have nothing to hang their head about. They ran a great race. … And I'm very happy that we jumped four spots in one season, especially this crazy season.

"The rest of our girls, it comes down to Sami Govey, she's a seventh-grader, and we have Ava Kazee in there as a seventh-grader. Lexie Sworski, she ran probably her best state meet race that I've seen her run since she started running,” Chaney continued. “And the rest of our kids, we had Abby Baldridge in there, Taylor Crawford, Havannah Kirk, was our only senior. So, we're coming back, both boys' and girls' teams, with only losing really one kid off the team."

With most of both Boyd teams returning next season Chaney says the bar remains high.

"These boys are still hungry. They're juniors and they'll be seniors next year, so they have nothing to lose to try to put it all out there next year,” she said. “And with the girls too. I'll have two girls that are going to be seniors. Sophia being one of them. And those girls are going to do nothing but fight to get to (a) higher (place) that what they were this season. So, hopefully, we can have some normalcy next fall and get out some more and get some good hard races and take it from there."