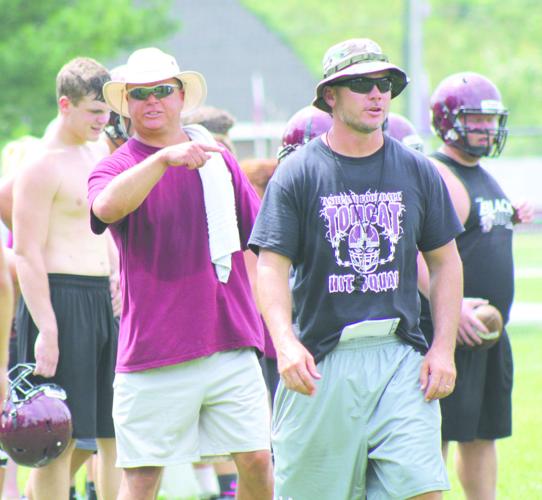 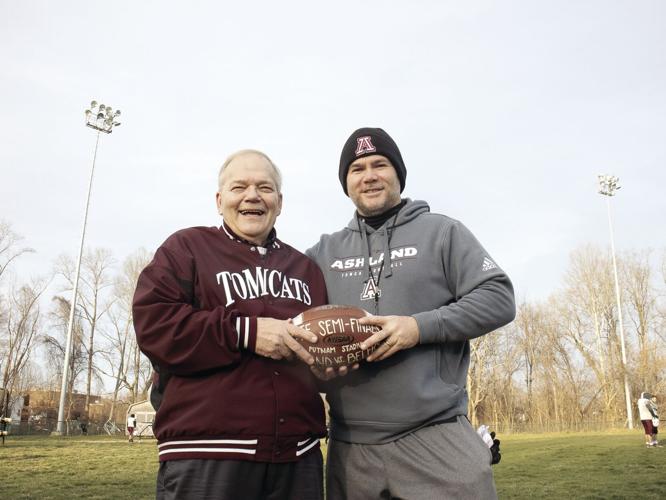 Matt Jones | The Daily Independent Dicky Martin and Chad Tackett pose at the Ashland football practice field with the game ball from Friday’s win over Belfy. The Tomcats gave Martin the ball which was presented by Tackett on Friday after the game.

Matt Jones | The Daily Independent Dicky Martin and Chad Tackett pose at the Ashland football practice field with the game ball from Friday’s win over Belfy. The Tomcats gave Martin the ball which was presented by Tackett on Friday after the game.

Chad Tackett has seen firsthand what it takes to be an Ashland football coach.

The former Fairview head man has spent 15 seasons on the Tomcats’ sideline and the last seven campaigns as defensive coordinator under Tony Love.

Tackett will be the next person to be handed the reins of the historic program and the rich Ashland tradition after he was named the new head coach on Tuesday.

Tackett said he embraces the challenge. He did not want the players’ environment to change over the offseason. He made it his first priority.

“I knew what I was getting into when I applied for the job,” Tackett said. “I’ve had a front-row seat to what those expectations are working under Leon (Hart) and Tony. I’m in this for the kids. My greatest concern is not an individual honor. I wanted the kids to have a stable environment and easy transition. I want them to be successful.”

Tackett played at Fairview and led the Eagles from 2003-2006. He won 29 games in his four seasons as head coach in Westwood. Fairview achieved its first season with double-digit wins in 2003 and won the program’s first district championship under Tackett’s leadership.

Tackett joined Hart’s staff in 2007 and spoke about the knowledge he gained during his tenure at Ashland. The Tomcats’ defense allowed a paltry 5.3 points a game during their 2020 run to a state championship, the first title in 30 years.

Tackett felt the timing was right to take the next step.

“I needed something different,” Tackett said. “I wanted to learn and grow my football IQ. I was on some really great staffs at Ashland. I learned a lot from the guys that were on those staffs and coaches I worked for with coach Hart and coach Love. I learned about the game and observed how things were handled on and off the field.

“It’s always been a goal of mine when I got into teaching and coaching to be the head coach at Ashland,” he added. “I felt like I was prepared for the job. I am familiar with the kids, the community and the program.”

Tackett wants to put his own imprint on the program, but the preparation, the work ethic and the mindset will not change.

“I still believe in the same principles with what we’ve done over the past several years,” Tackett said, ”from an X’s and O’s standpoint. I think we have found a recipe for success with the way we work our kids. I will put my own spin on things.”

“We feel that his previous experience has prepared him to lead the program to new heights,” Conway said in a press release, “and are delighted for him to begin his leadership of the Tomcats program.”

The Tomcats finished with a 7-5 record last year and advanced to the district championship game. Ashland loses several seniors, but still has a roster full of talent, according to Tackett.

“We have a lot of skill players coming back,” Tackett said. “I am excited about it. We have some young talent. Aris Pittman, Terell Jordan and Braxton Jennings are guys that are going to be exceptional players. We have guys to replace on the offensive line. We have several guys back on defense that have started or received quite a bit of playing time.”

Tackett is the student counselor at Oakview Elementary School.