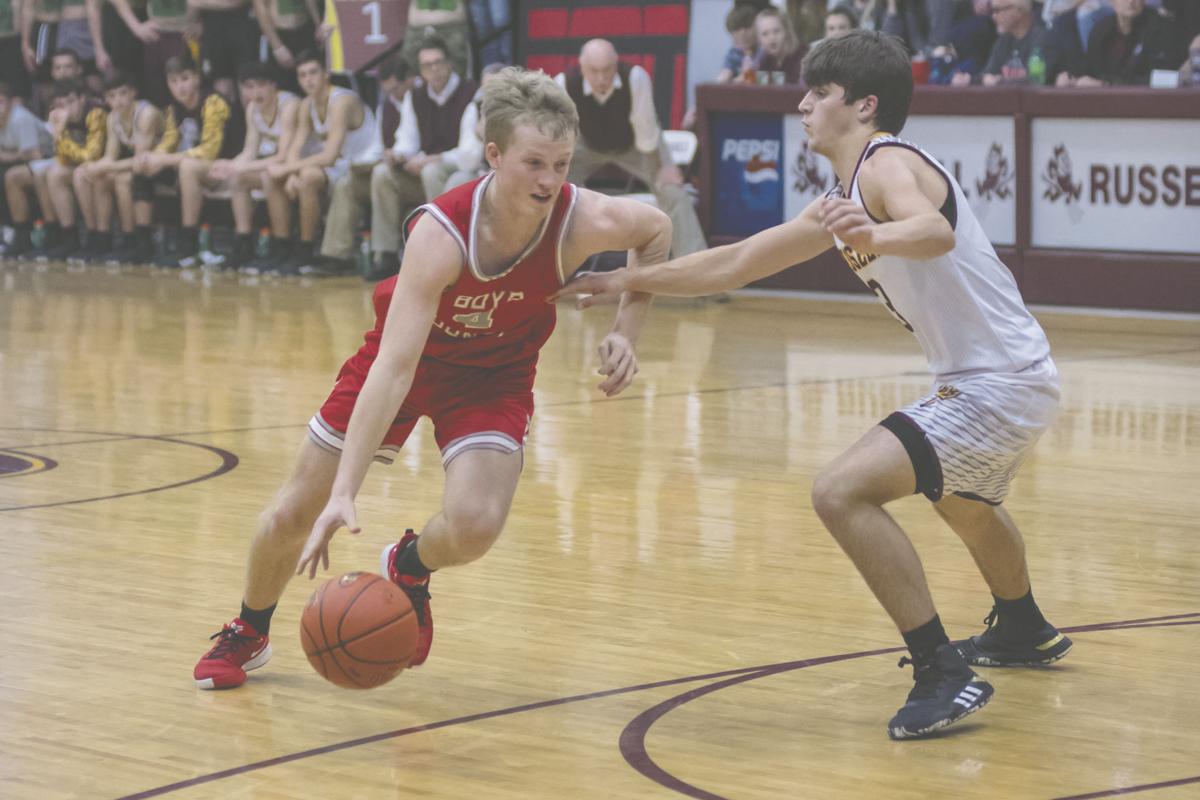 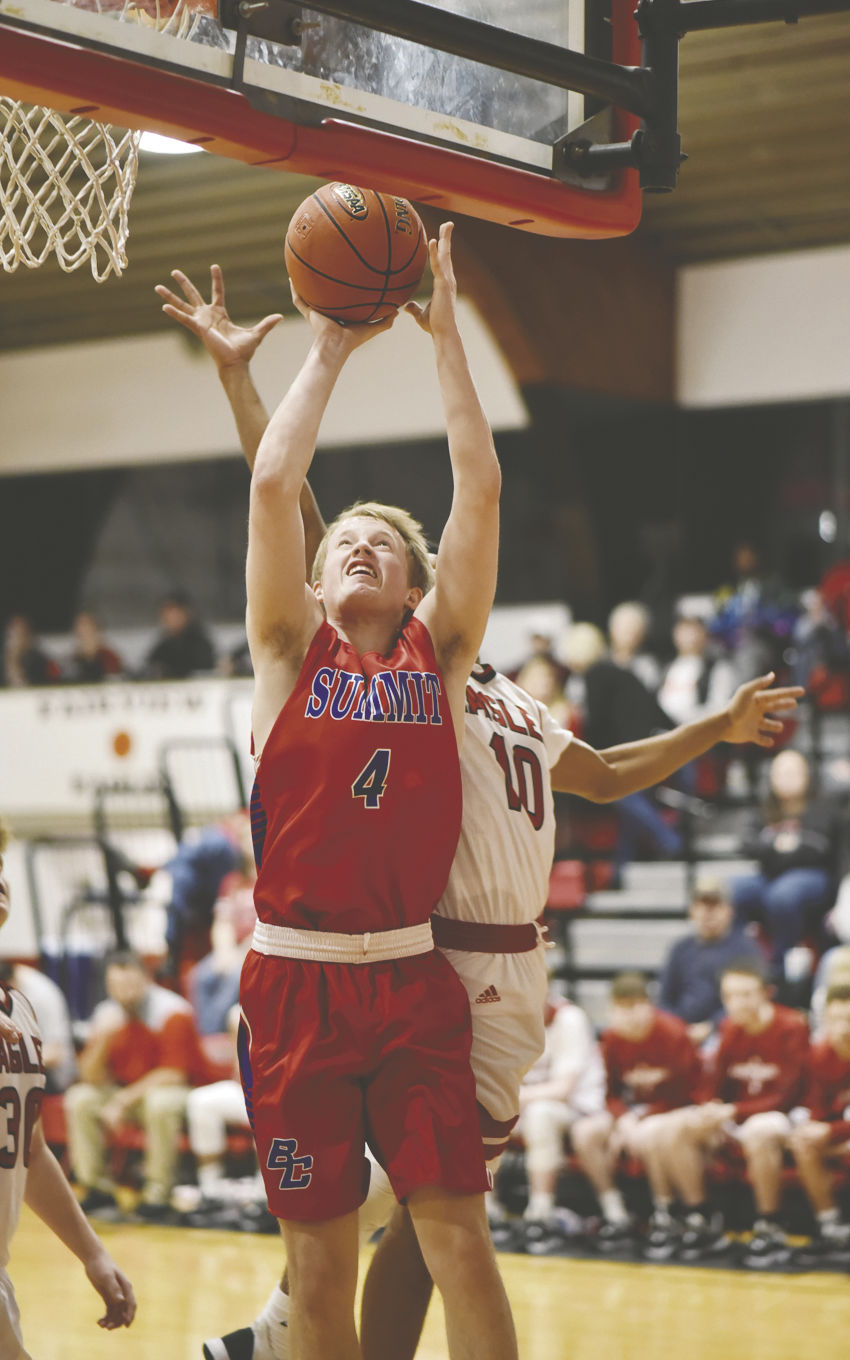 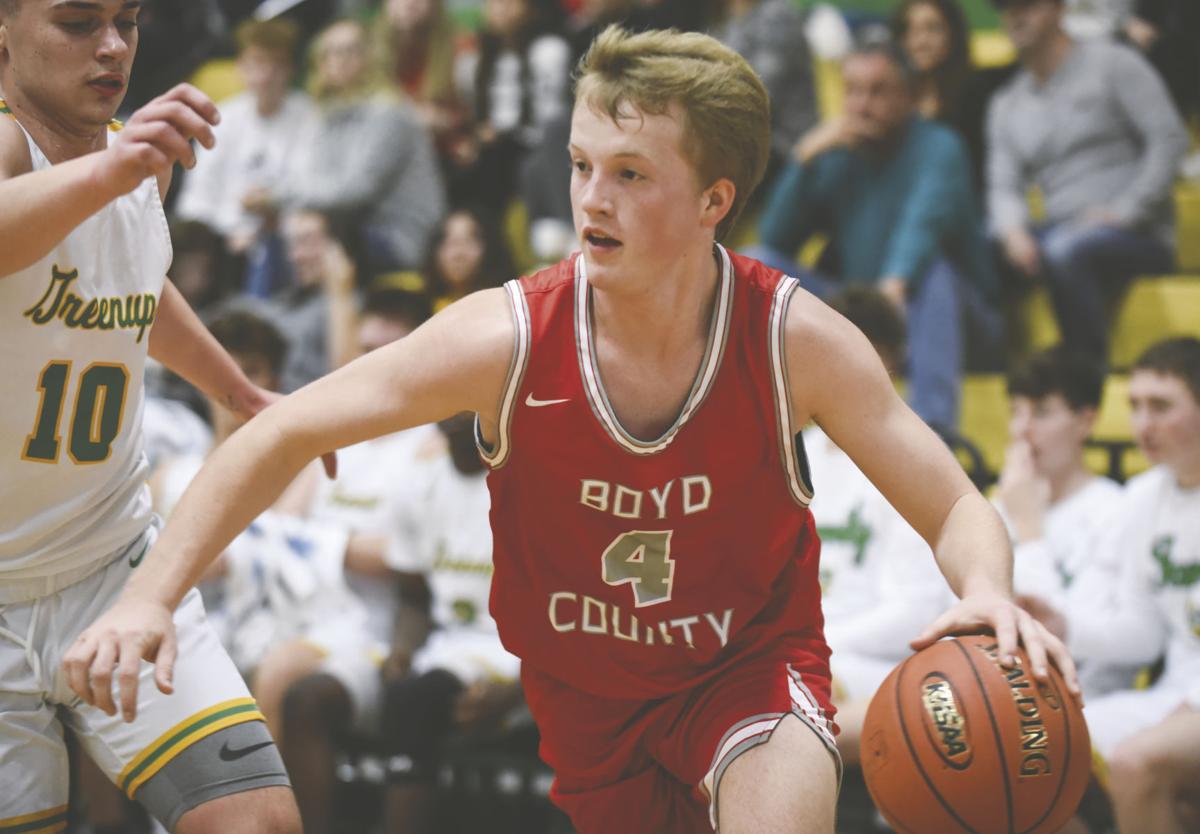 Boyd County boys basketball coach Randy Anderson doesn’t claim to be a fortune teller, but he could clearly see he had something special five seasons ago.

Blake Stewart joined the varsity team as an eighth-grader. He was already showing signs of greatness that would cement him in the record books and into Lions lore.

Stewart’s hard work and determination only increased his talent, according to his coach, but his immeasurable class and character would always remain constant.

“Ever since I’ve known Blake, he has been quality,” Anderson said. “He’s one of these guys that’s not fake. You see him every day. He’s got a great attitude. He is kind to people. You see him in the school studying, it’s just unbelievable. He is one of those unique kids. As good as he has been and successful as he has been, he’s always been very, very humble.”

Stewart ranks second in school history in career points (2,189), made 3-pointers (219) and assists (482). He has also pulled down 826 rebounds and is Boyd County’s all-time steals leader.

Even with his impressive numbers, Stewart is not a stat guy. He believes a strong work ethic and staying focused on the court will lead to success.

“Every game I go into, I try not to focus on scoring,” Stewart said. “I just do what my team needs me to do. I always think if you come in and play hard, everything else will follow. The points will come. The assists will come.

“I just come in and play as hard as I can. The steals came with it. It’s not so much playing defensive-minded. It’s playing smart and knowing what the offensive player is going to do next.”

Stewart developed a love of basketball from his father. Tommy Stewart is an assistant on the girls basketball team. The graduating senior spends most of his time between the lines in the gym. His dad instilled a passion for the game and a pride wearing the Boyd County uniform.

“It’s always been a privilege to be part of Boyd County,” Anderson said. “He knows that. His dad went here and his family is all from here. To be a part and represent Boyd County has always been important to him. Even when he came in as an eighth-grader, he worked hard, and he really respected the older guys.”

“Blake has great parents and a grandma that has taught and modeled a great heart for others,” he added. “Blake is cut from the same cloth.”

Stewart said his father wasn’t his only hardwood inspiration. The now-former Lions credits Anderson, or more affectionally known as “coach A,” with the greatest assist in his basketball career.

“I feel more comfortable on the court because of coach A,” Stewart said. “He is somebody who has been with me since the sixth grade, helping through this whole basketball process. I wouldn’t be here without coach A.”

Anderson said Stewart has always been a great role model for young players and represents his school well on and off the court.

“One thing I’ve always tried to promote is the program comes first,” Anderson said.  “He has done a tremendous job of that. Blake has loved every moment being part of Boyd County. He has done this since he was 5 or 6 years old. He has been around the gym and been around people. He understands it. … He is still doing it. He will go to the youth leagues and private workouts.”

Boyd County athletic director and girls basketball coach Pete Fraley has known the Stewart family for a long time. He said he has watched Blake grow into an exceptional basketball player and person.

“The team will play Friday night, whether win or lose,” Fraley said, “and you will see him on Saturday at youth league games taking pictures with little kids. He’s never above doing stuff like that. He’s always giving back to the program and the community. I can’t say enough good things about Blake Stewart. He’s one of my all-time favorite people.”

“He always has time to talk and take a picture,” Anderson added. “He is mature well beyond his years.”

Stewart said giving back has always been important to him. He doesn’t expect that feeling will ever go away.

“When I get older, I want to get into coaching, whether it’s young kids, middle school or high school,” Stewart said. “I want to be involved somehow.”

Stewart wasted no time making his presence known on the varsity level. He hadn’t arrived on the high school campus yet but was already making an impression on the Lions upperclassmen, including Anderson’s son Bobby, a senior point guard during the 2015-16 season.

“There were days that he lit us up as an eighth-grader,” Randy Anderson said. “Bob would say, ‘Dad, he’s good now. I can’t imagine what he will look like when he was a senior.’ Bob is not a prophet, but he could see it back then.”

Stewart said Bobby left a lasting effect on him, too, and his approach to basketball. They still stay in contact and Stewart wants to emulate the example he made with his work ethic.

“I started playing on the varsity team in eighth grade,” Stewart said. “Bobby taught me hard work. I saw how hard he worked in the weight room. I’ve worked out with Bobby every summer since then.”

Stewart’s evolution as a player continued in the last two seasons as he tried to enhance his leadership skills along with his basketball skills. It wasn’t comfortable at first, but eventually his voice was heard.

Boyd County hadn’t brought home a 16th Region trophy in nearly two decades in 2018. It was a lingering issue on the minds of Lions players, including Stewart, who could see the writing on the wall — or lack thereof.

“It was something that we had discussed our whole life,” Stewart said. “We had always looked up at that banner and saw that it ended in 2000. We always thought, why in the world did it end in 2000? The first year I remember Boyd County basketball, they only won two games. As we tried to get them back to that elite level, it was a great feeling and doing it with all my best friends was even better.”

The Lions had won a total of five games in the two seasons before Anderson came to town. Boyd County has totaled 204 victories in the past decade since he’s been on the sideline. Stewart played in 98 wins as a starter.

Stewart displayed his desire and toughness during the Lions’ run to Rupp Arena in 2018. The then-sophomore missed the semifinals due to a severe illness but wouldn’t be kept out of the championship clash with Ashland. A short-handed Boyd County played without forward Reese Robinson for most of the second half against Rowan County and missed the finals. The Lions still prevailed, 54-49, over their rival.

Stewart also holds the school record for most games played at 149. It was significant to him that at least one of those contests was in the Sweet Sixteen.

“He’s has been so steady, even in his sophomore year when we went down to the state tournament,” Randy Anderson said of Stewart. “He was excited and eager and it was a dream fulfilled playing at Rupp. He had a tremendous game because once the ball went up, he was just playing again. … It’s hard to get between the lines, take care of business, have fun and take care of your teammates. There’s not a lot of guys that can do that. He’s always been that type of kid.”

“He was a great teammate and a great leader,” Fraley said. “He always showed tremendous respect for the game and the officials. If you contact officials, they will say he was one of the most professional players on the floor.

“When we played in the state tournament against Fern Creek a couple of years ago,” he added, “there were supremely talented players on the floor. Blake rose to that occasion and played right with them.”

Stewart committed and signed to play at Centre College on May 16. The Colonels are an NCAA Division III school and were 24-5 last season. The small campus and his new coach left quite an impression on him. He said he hasn’t decided on a major.

“I chose Centre because of the good relationship that I had with coach (Greg) Mason,” Stewart said. “I felt really comfortable going there. He reminded me of coach A. It was a real family atmosphere there. It reminded me a lot of Boyd County. It’s a nice town. I really liked it.”

Mason is a Centre alum and the winningest coach in program history with 411 wins. The Colonels won the regular season and postseason tournament in the Southern Athletic Association last year.

Fraley believes Stewart will have no problem adjusting to college basketball.

“He is very strong academically,” Fraley said. “He is goal-oriented and driven. He is the type of kid that Centre wants. You have to be that type of kid to survive at Centre. It is very tough academically. They play a good brand of basketball, too. I think it’s a good fit for Blake.”

Randy Anderson believes Stewart will have the same positive effect on his new teammates that he did on his old ones. He leaves a legacy of constancy and commitment.

“He was an impact guy when he played here and he is going to be an impact guy for years to come,” Randy Anderson said. “He’s that kind of an example. I just can’t explain enough what a pleasure he has been for five years. He’s never had an attitude. He’s always willing to work and he enjoyed being in the locker room.”

Of all the accolades he has achieved, Stewart said the thing he will covet the most are the people who shared the ride with him.

“Coach Anderson always said the memories and the relationships that you make in basketball are the things that you will remember the most,” Stewart said. “I’m proudest of the friendships that I have built that are going to last a lifetime.”