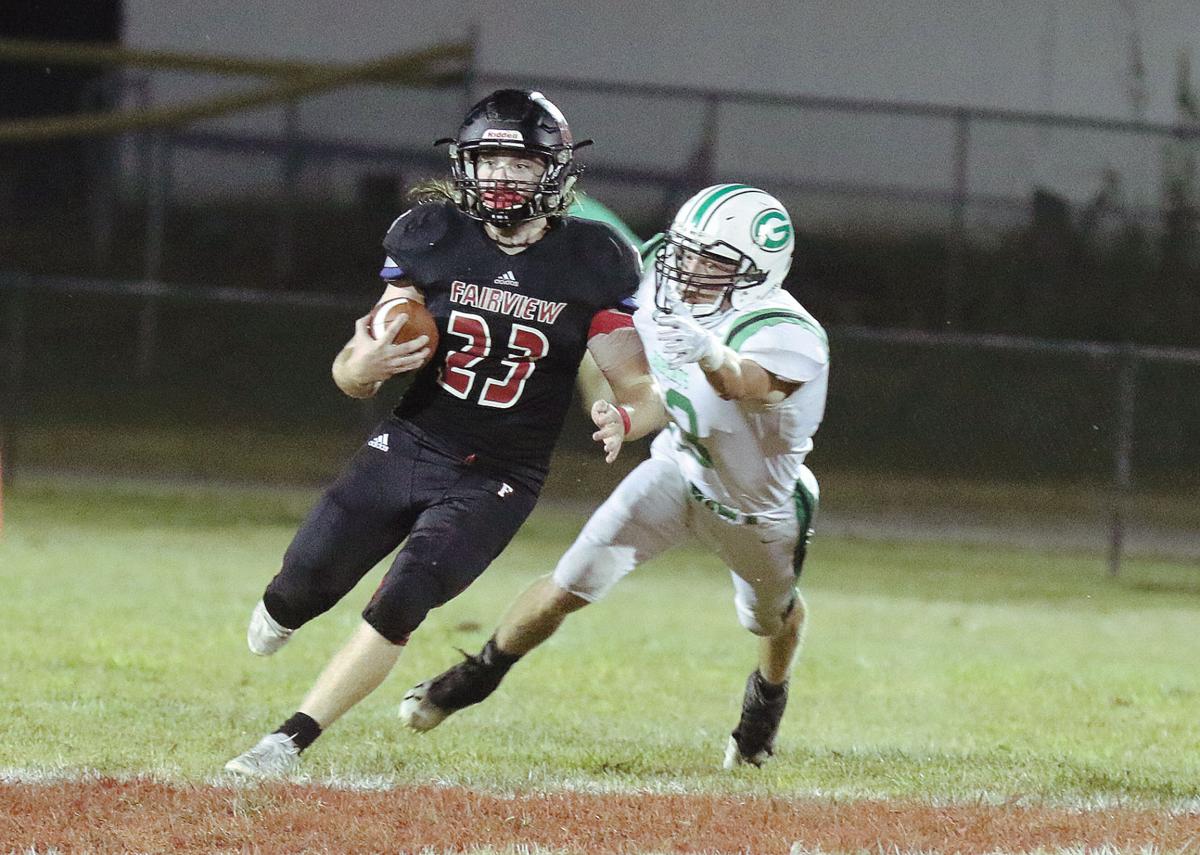 WESTWOOD Fairview was out of school Monday and Tuesday, which might be the only break from classes in recorded history that has disappointed a student.

It meant junior Gracin Smith and the Eagles football team had to postpone a feeling they hadn't experienced for nearly 23 months -- until a 38-6 victory at Morgan County on Sept. 13 -- but have since come to chase.

"Especially with that Morgan County game, going oh-and-whatever last year," Smith said, "it was awesome because everybody's coming up to us after the game (saying), 'Good job, boys, great job,' and obviously beating Green was a great feeling. Lewis, same thing.

"Going to school, those Mondays, the school was just as ecstatic as we are."

Fairview followed that breakthrough against the Cougars, which ended a 14-game losing streak, with home wins against Green, 26-22, on Sept. 27, and Lewis County, 38-28, on Friday.

Smith has been in the middle of all three victories. He's listed at 5-foot-5 (he says he's closer to 5-6 or 5-7) and 150 pounds, but fills two of the most physical positions on the field -- running back and middle linebacker.

Smith is the Eagles' leading tackler with 54 solo tackles, 38 assisted stops and 10 tackles for loss. He's second to quarterback Jack Roy in rushing yards, with 501, to go along with five TDs.

All of those numbers got significant boosts on Friday against the Lions. Smith ran for 143 yards and two touchdowns on 19 carries and produced 13 solo tackles, seven assisted and five behind the line of scrimmage.

"Everything that Gracin does comes from his preparation," Eagles coach Daniel Armstrong said. "He's the hardest worker in the weight room. He's always tuned into practice. He never misses. He's one of the first ones here.

"You tell him, 'Gracin, this week you're gonna have to play some noseguard, or this week, you gotta block on offense,' it's, 'Yes sir,' and it's not a lip-service thing with Gracin. Everything he does he pours everything into. So it's really not a big surprise when you see him make some plays."

Not all of Smith's impact is statistical. His versatility and ability to think on the fly have aided Fairview as it has tinkered both offensively and defensively in search of the best fit for its personnel, Armstrong said.

"Gracin's such a quick study on stuff, he can kinda be a coach on the field," Armstrong said. "You'll see him on Friday nights getting guys rearranged and lined up, especially on defense, if someone's out of alignment or in the wrong technique.

"If we've got a blitz on and a lineman stunts the wrong gap, Gracin will adjust his blitz to make that defensive lineman right. ... He takes snaps at quarterback when we go to Wildcat, he lead-blocks as good as any back that I've been around, and when you need him to lower his shoulders and get 2 yards, he can, and when he needs to get in the open field and make a move, he's pretty good at that too."

Smith showed just about all of it against the Lions. Fairview's showing against Lewis County in Mossy Bottom was sweeter, he said, in light of the Eagles' 52-0 loss in Vanceburg last fall. Smith rushed for 80 yards in that game, but the Eagles couldn't get much else going.

"I was just thrilled to be a part of it," Smith said. "I think this was probably my best offensive game this year. Last year, I know they killed us, but coming back this year and actually beating them (was special)."

The victory sends Fairview into the postseason at 3-6. The Eagles visit top Class A, District 6 seed Paintsville on Thursday night.

Fairview understands knocking off the Tigers is a difficult ask. The Eagles (3-6) are aiming for, at minimum, a better showing than they gave against Paintsville (7-3) on Oct. 11 in a 56-0 home loss.

"Compete. Go down and compete," Armstrong said of Fairview's goal. "The team that played here a couple Fridays ago against Paintsville's not the Fairview team that I think is representative of our kids. I think we were a little awestruck by their ranking and the P on the side of their helmet. Not taking anything away from them, they're a great team, but we just didn't compete in that game.

"I don't want there to be any intimidation; I want to go out and play a good, clean football game, and I think if we do that and execute our plays, tackle well, and stay competitive, I think that's a good way to lead into the offseason, provided we don't win."

Ed Harper, 50 died Friday. Funeral services will be Tuesday at 1 p.m. at Malone Funeral Home. Burial will be in the Sagraves Family Cemetery. Friends may call Tuesday 11 a.m. until service. malonefuneralhome.com

Ronald Lee Conley Sr., 79, of Ashland, passed away Saturday, Jan. 25 in King's Daughters Medical Center. He was born March 27, 1940 in Ashland, Kentucky, a son of the late Cecil Clayton Conley and Mary Oliver Conley. In addition to his parents, he was preceded in death by a grandson, Eric Al…