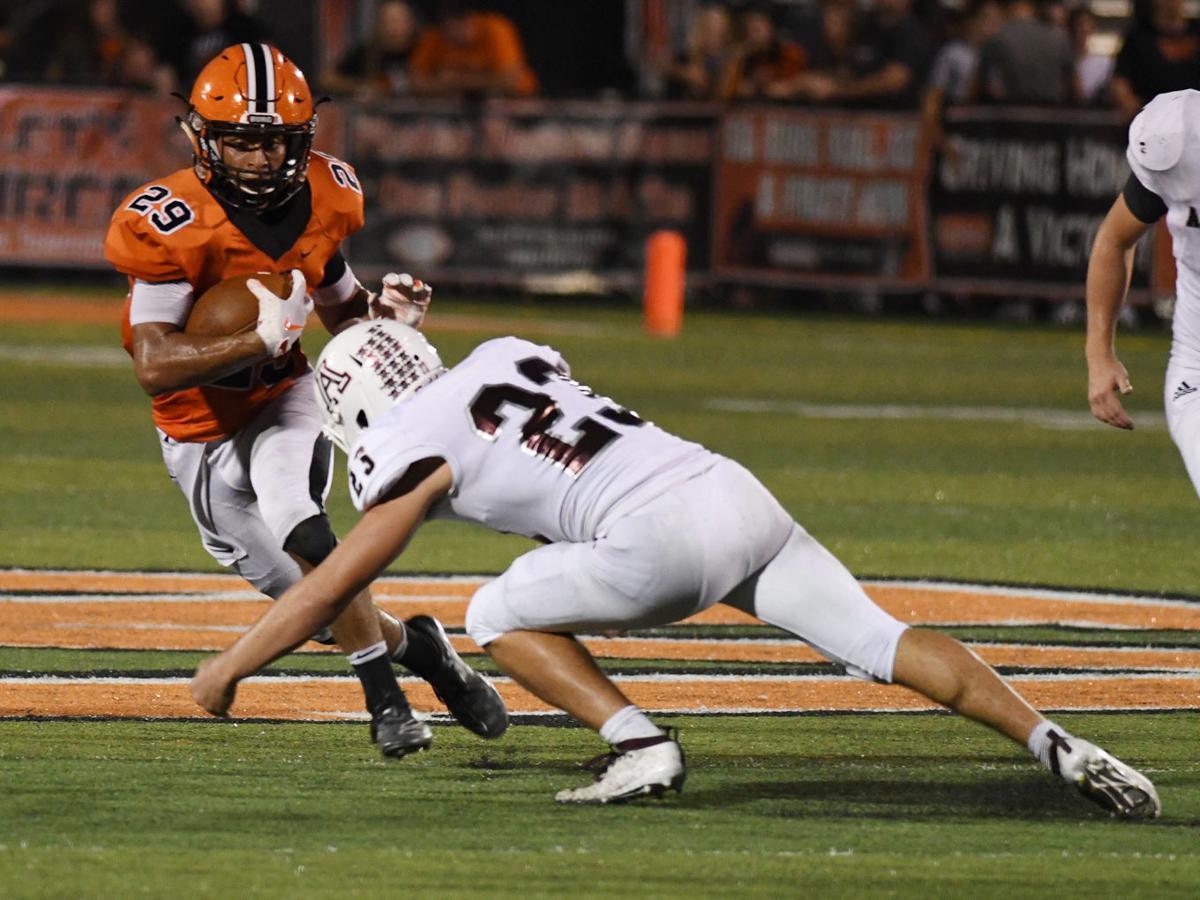 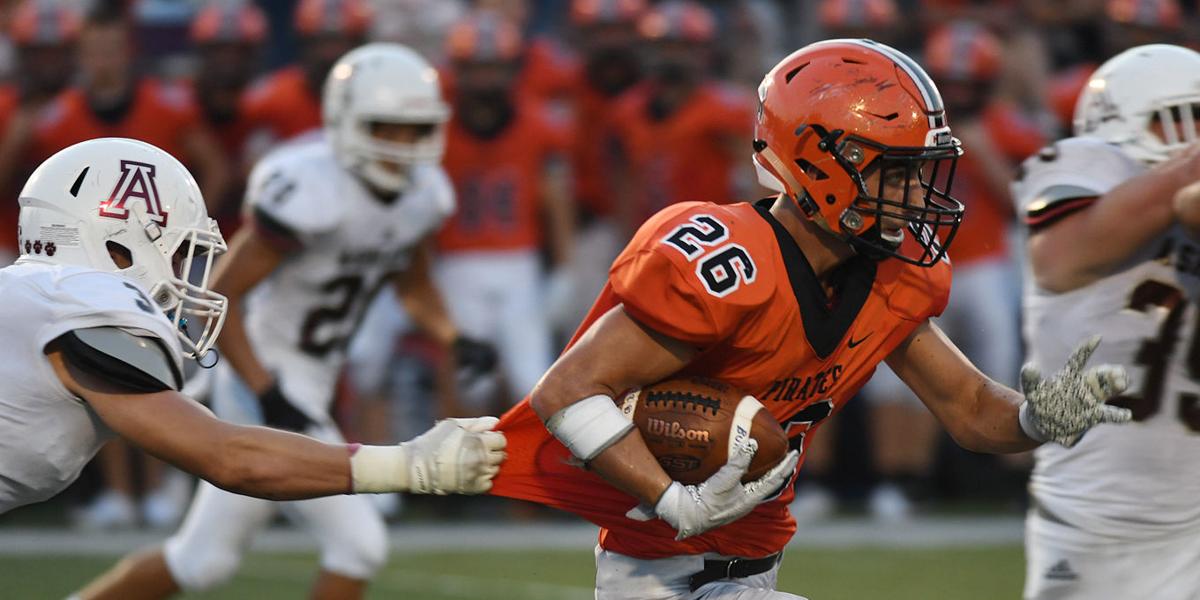 Ashland's Caleb Tackett gets a hand on Wheelersburg's Carson Williams during the second quarter. KEVIN GOLDY | THE DAILY INDEPENDENT 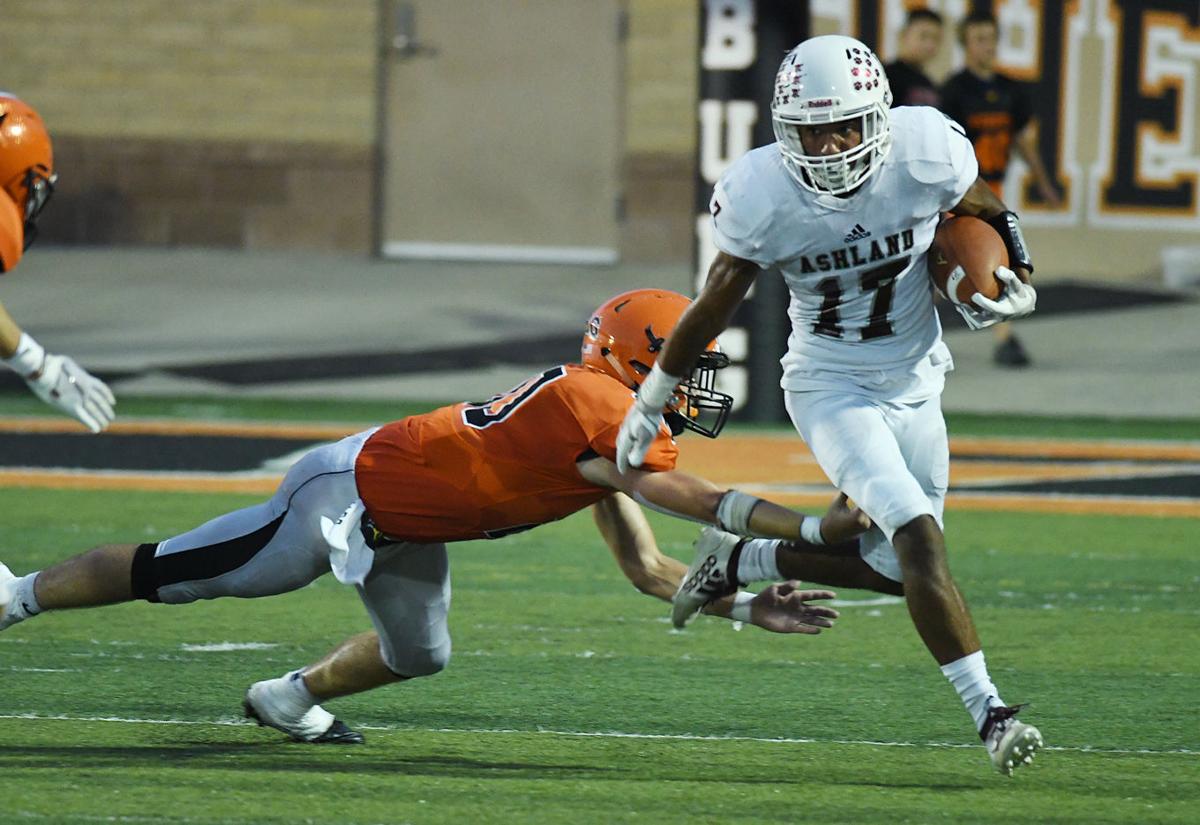 Ashland's JT Garret gets away from Wheelersburg's Gage Adkins during the second quarter. KEVIN GOLDY | THE DAILY INDEPENDENT 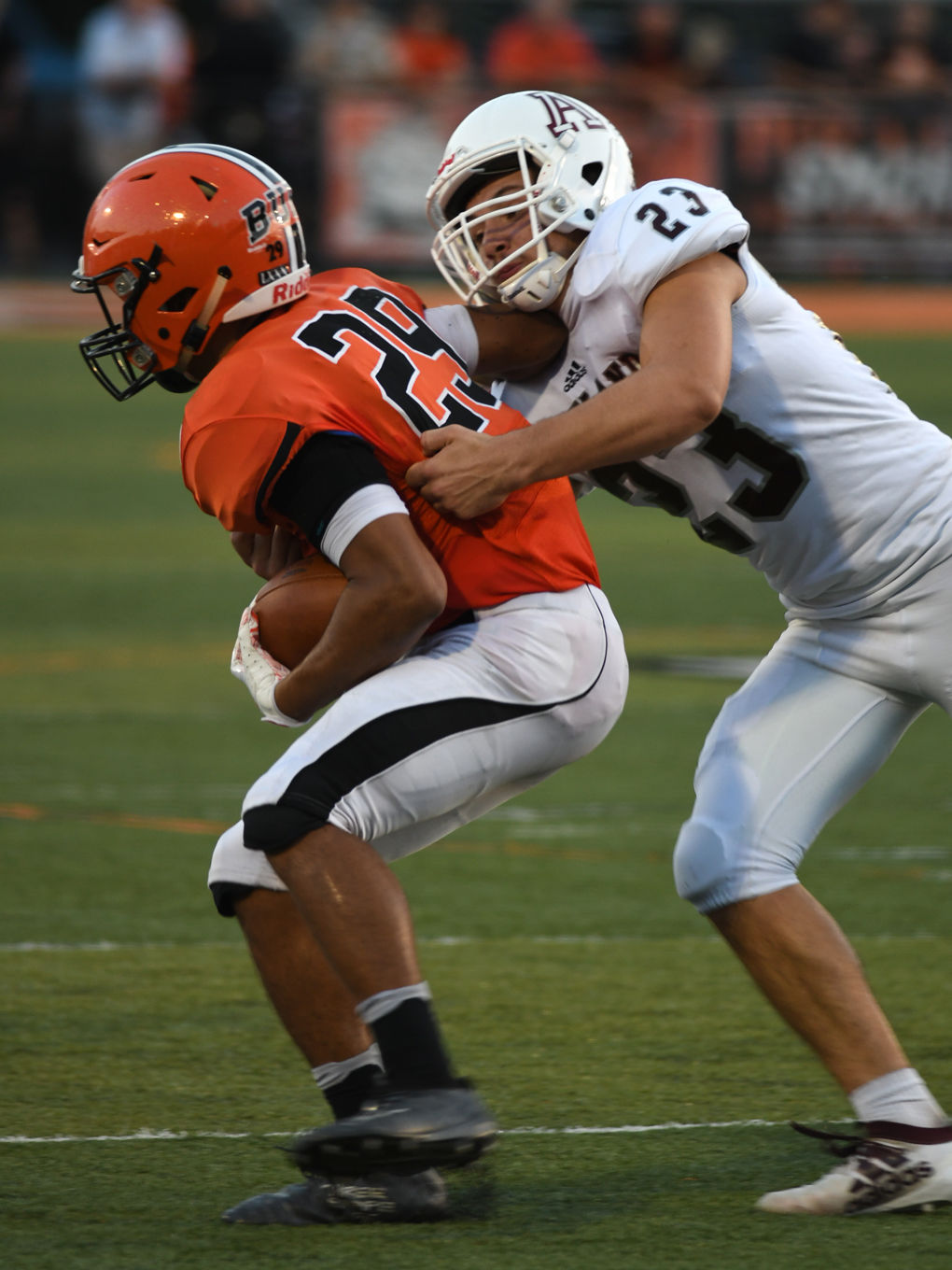 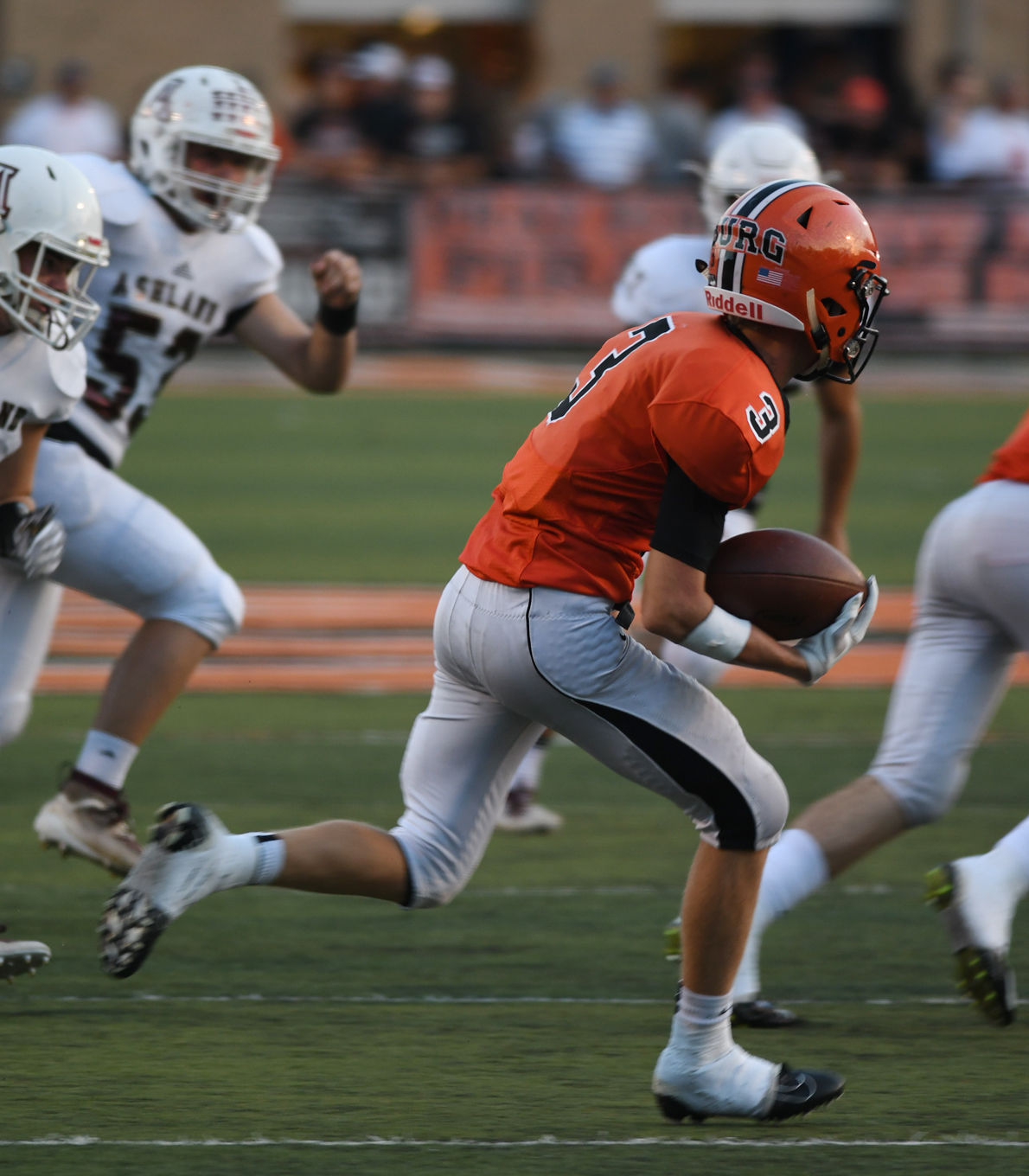 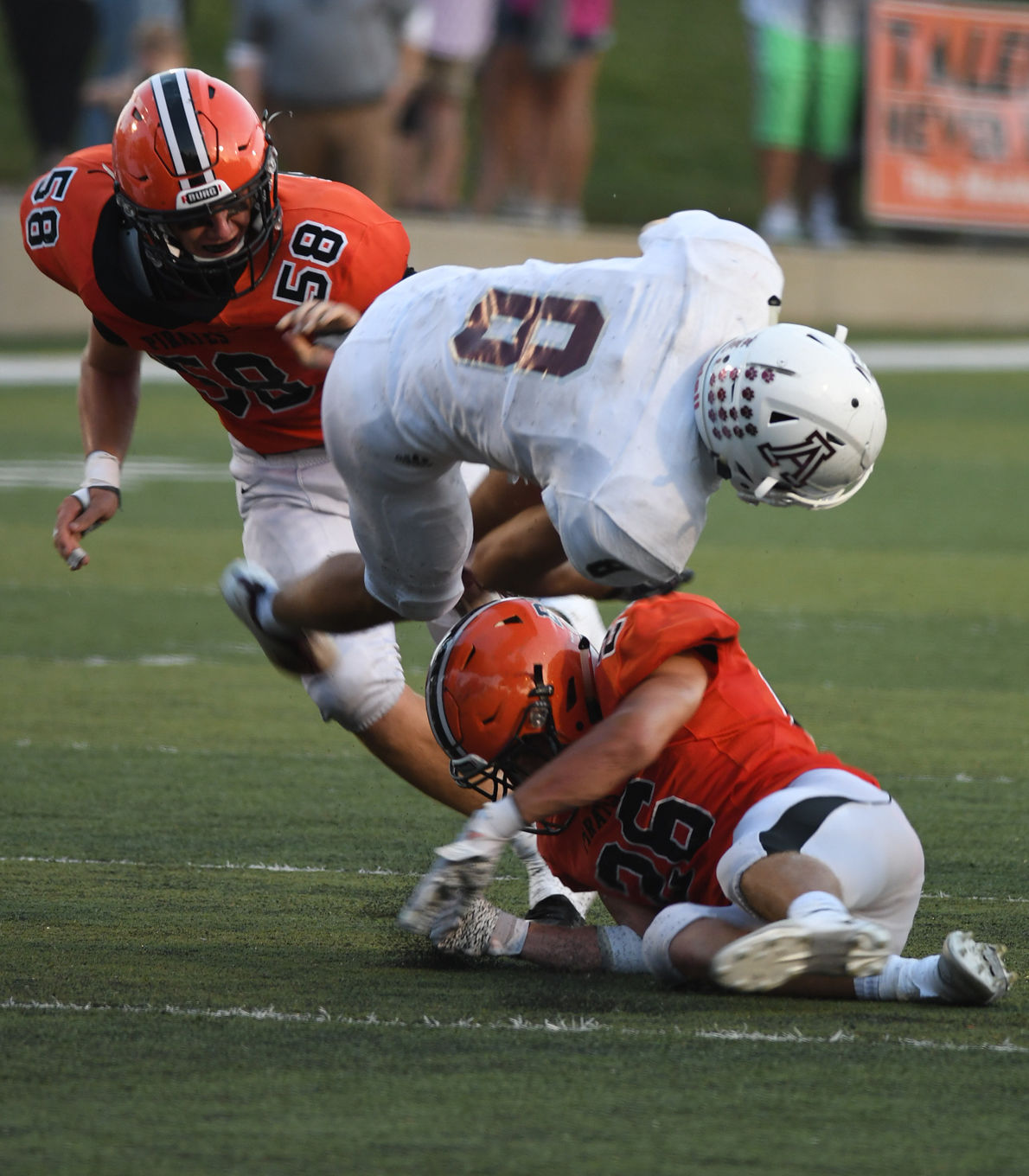 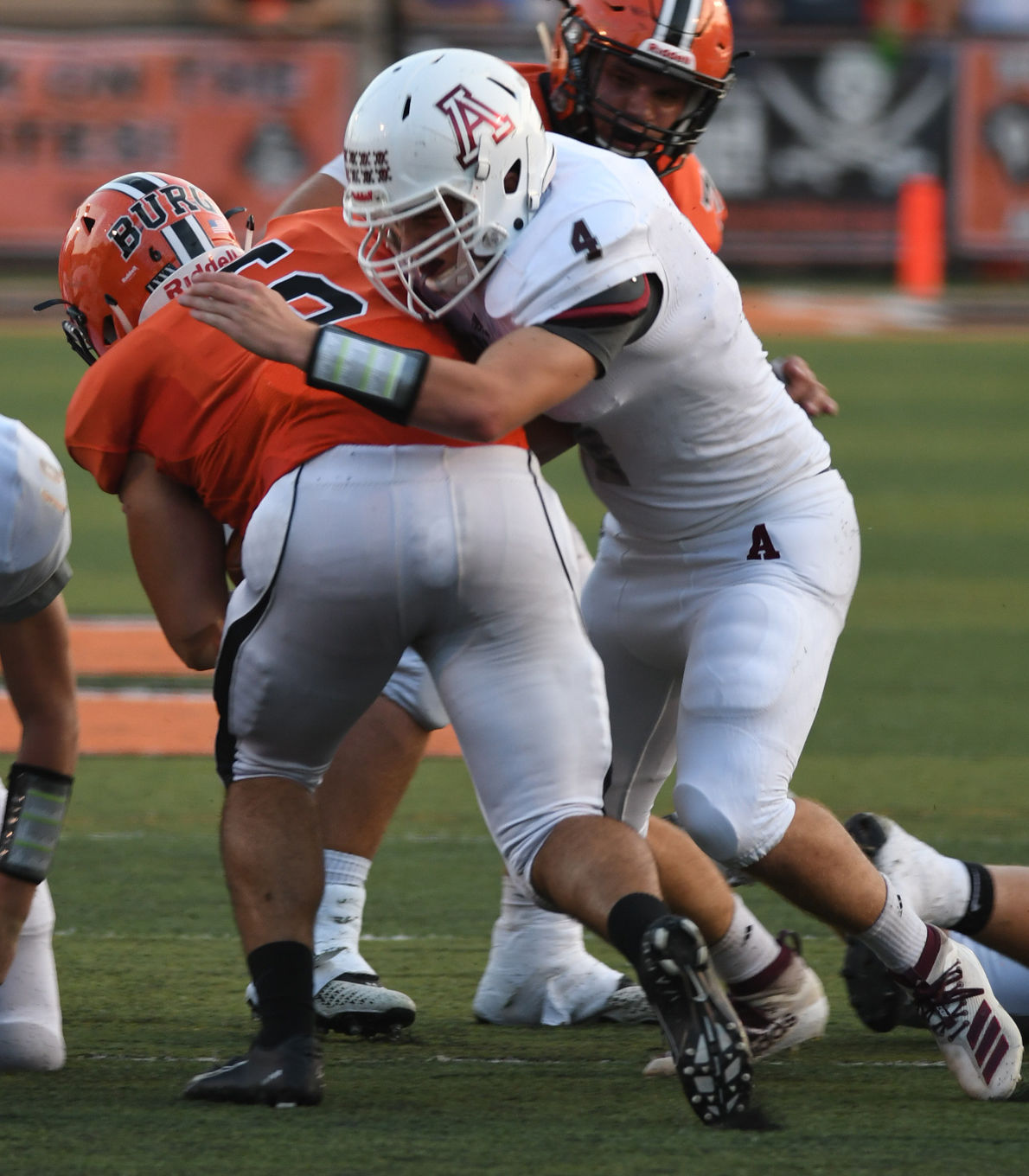 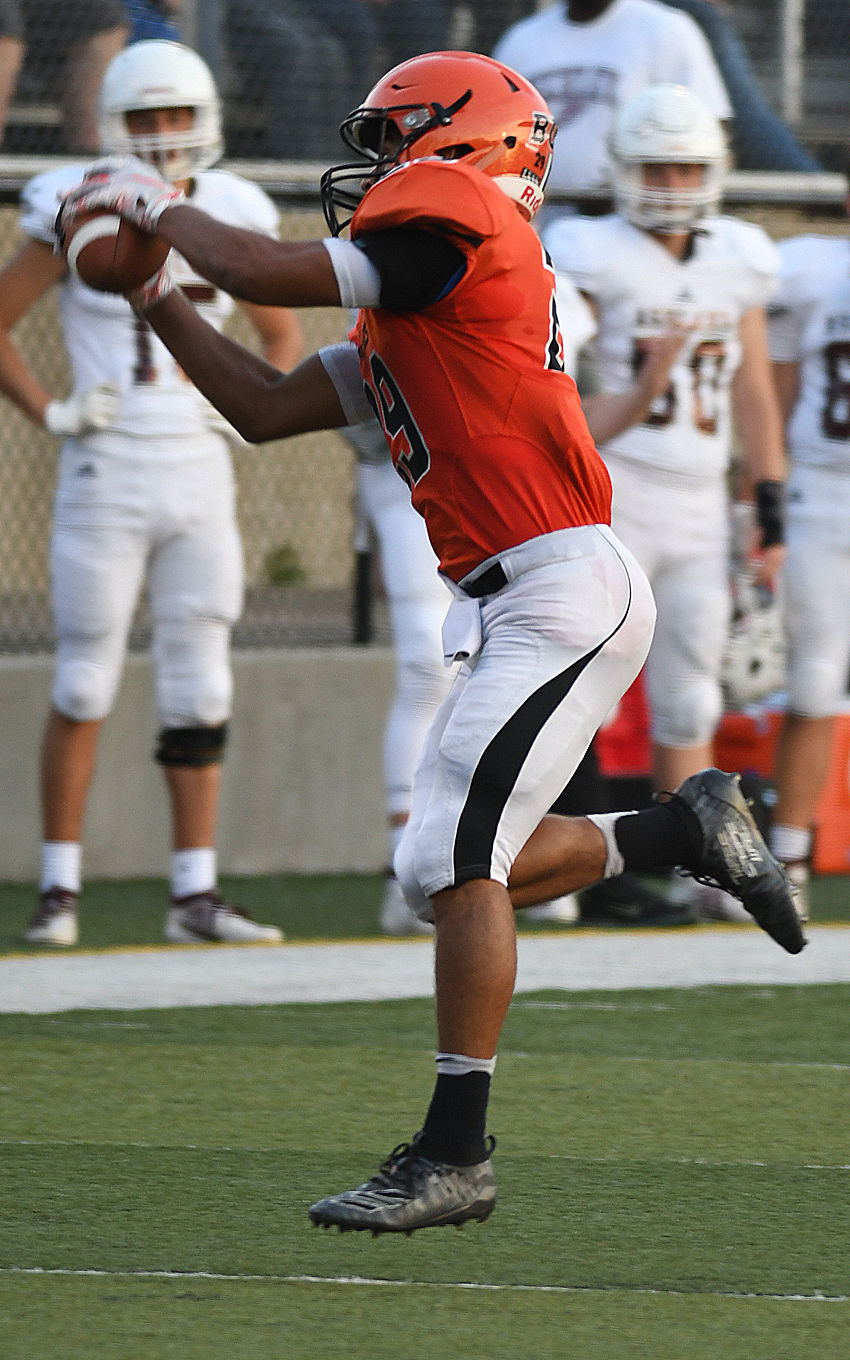 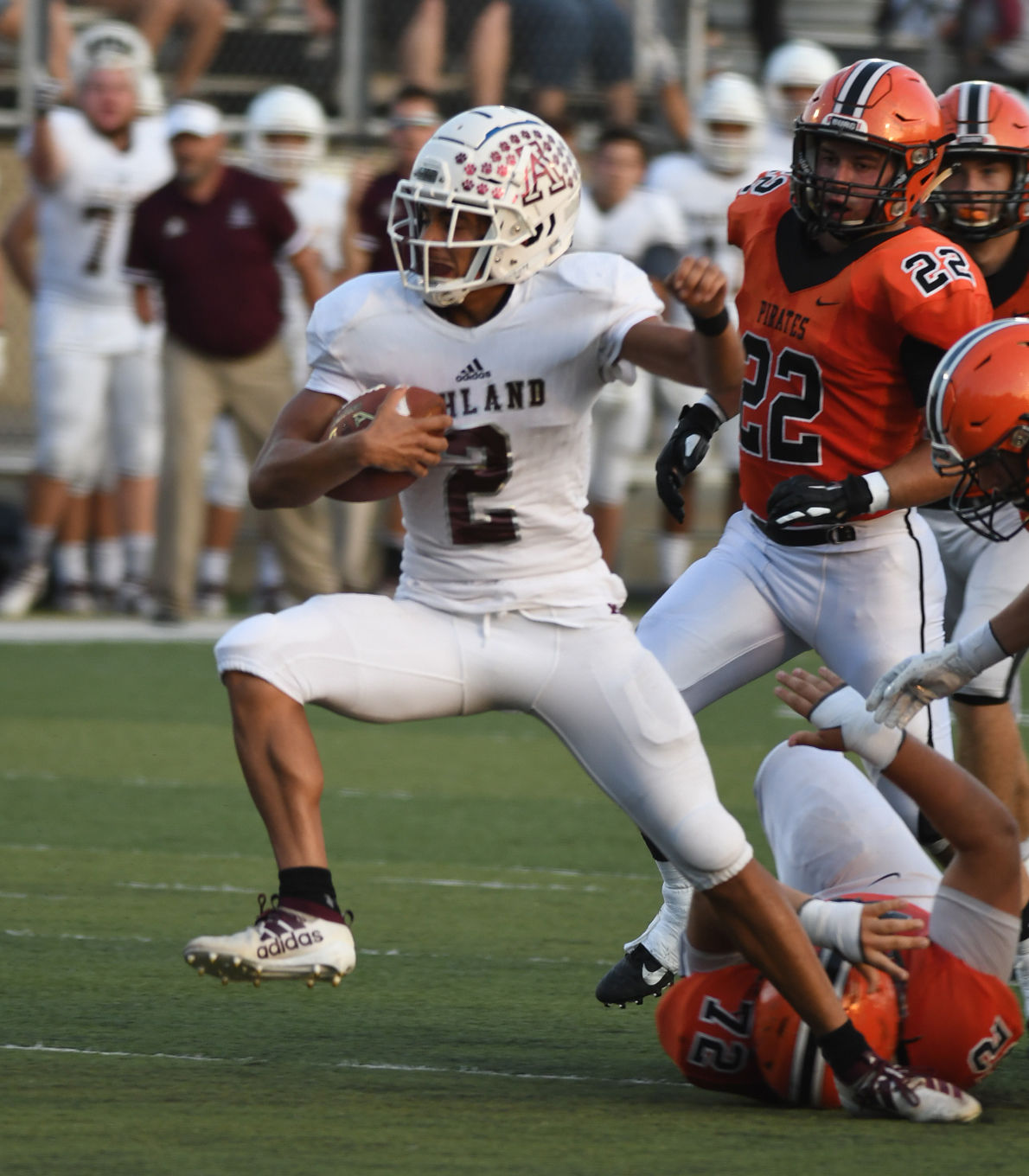 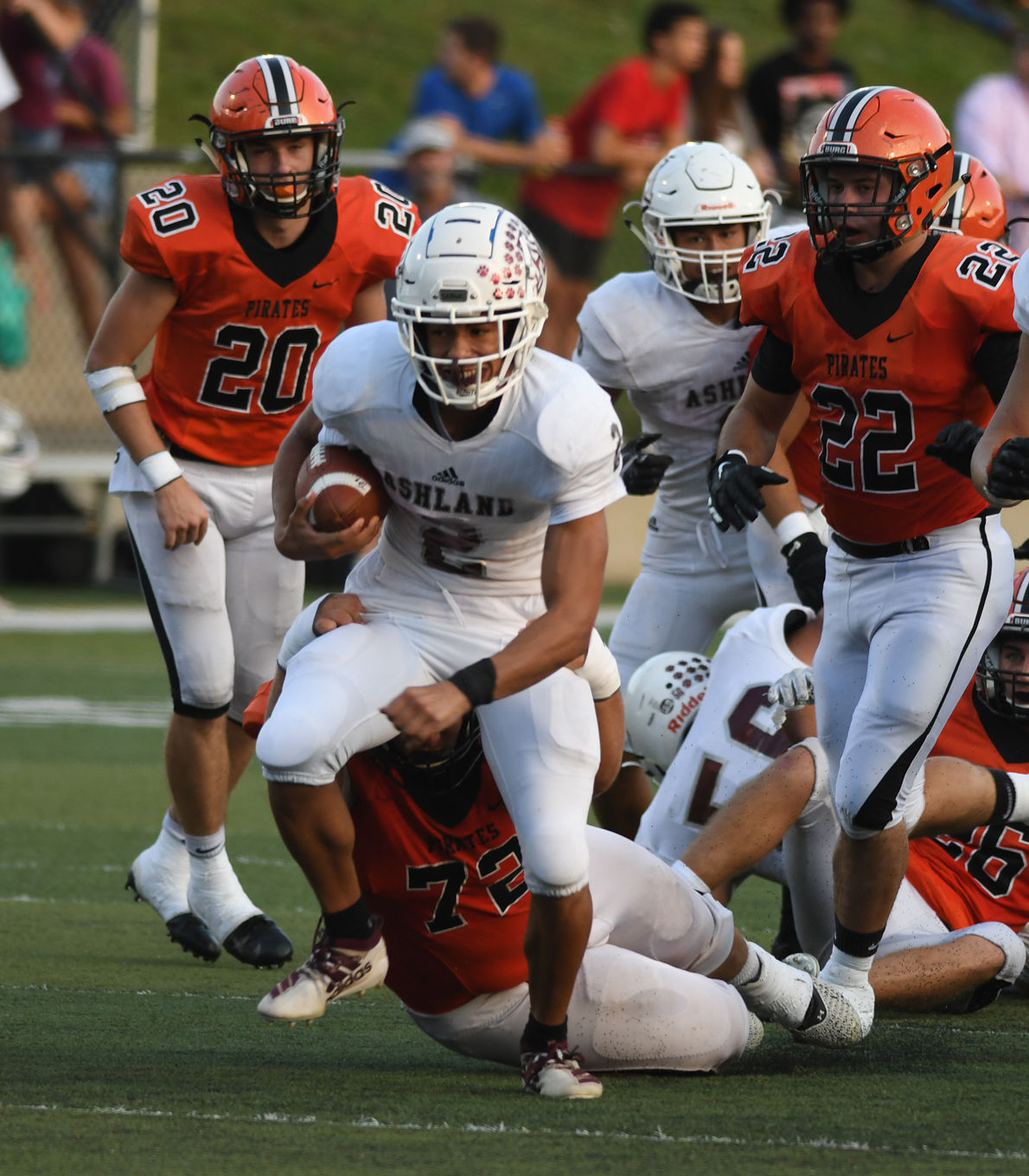 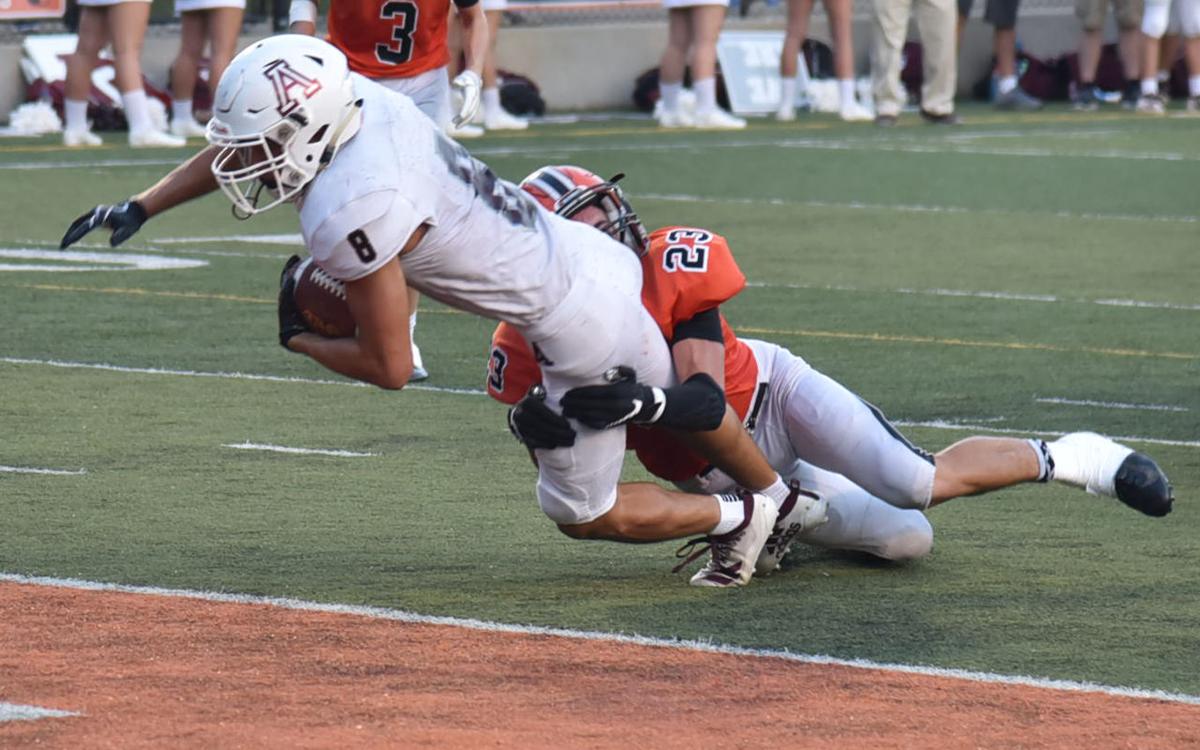 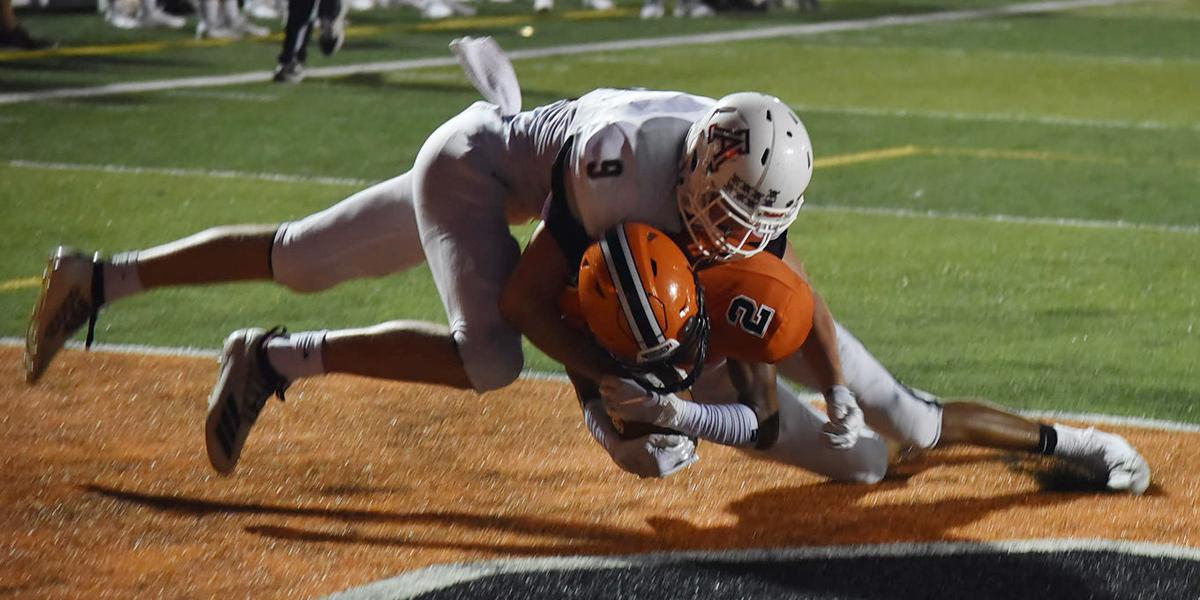 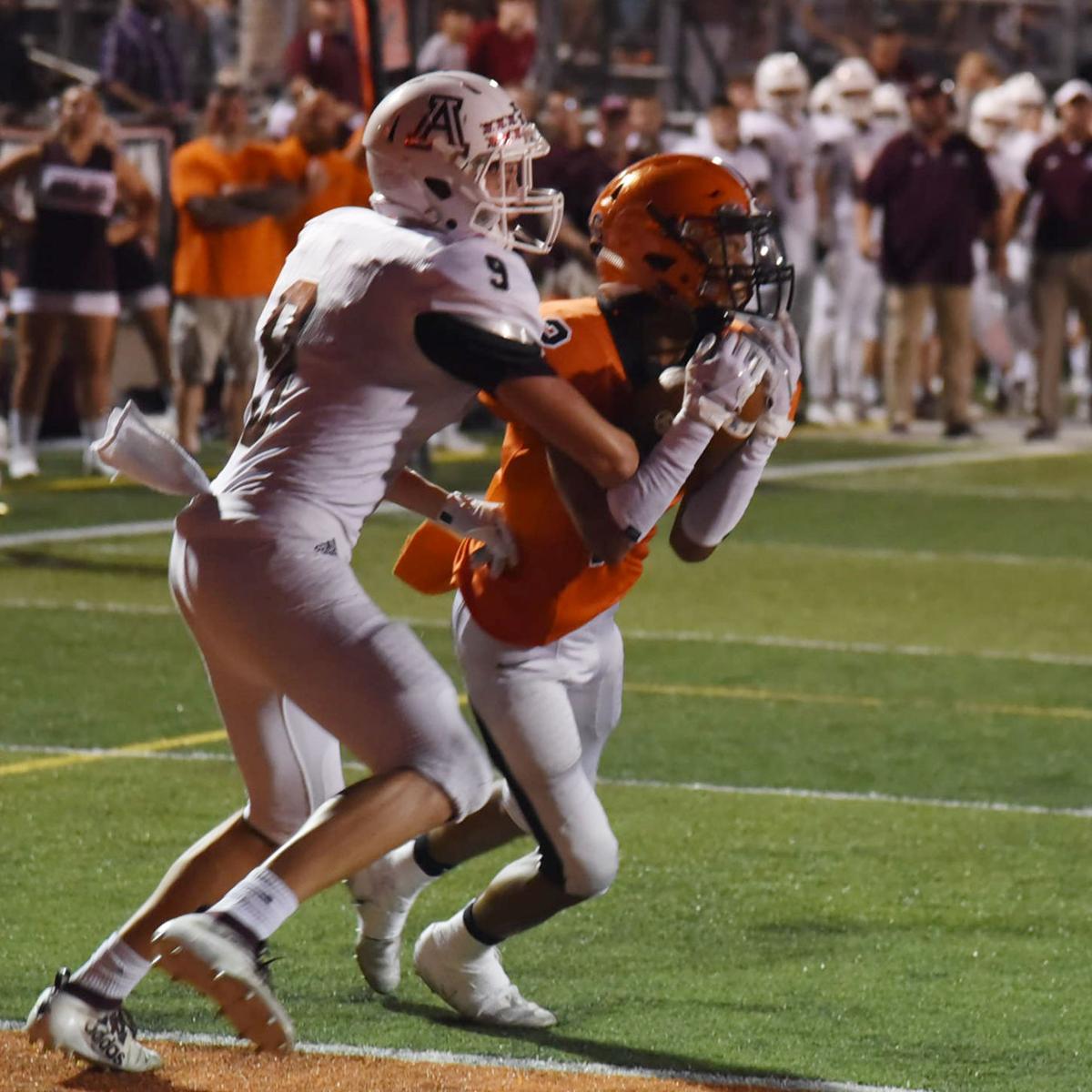 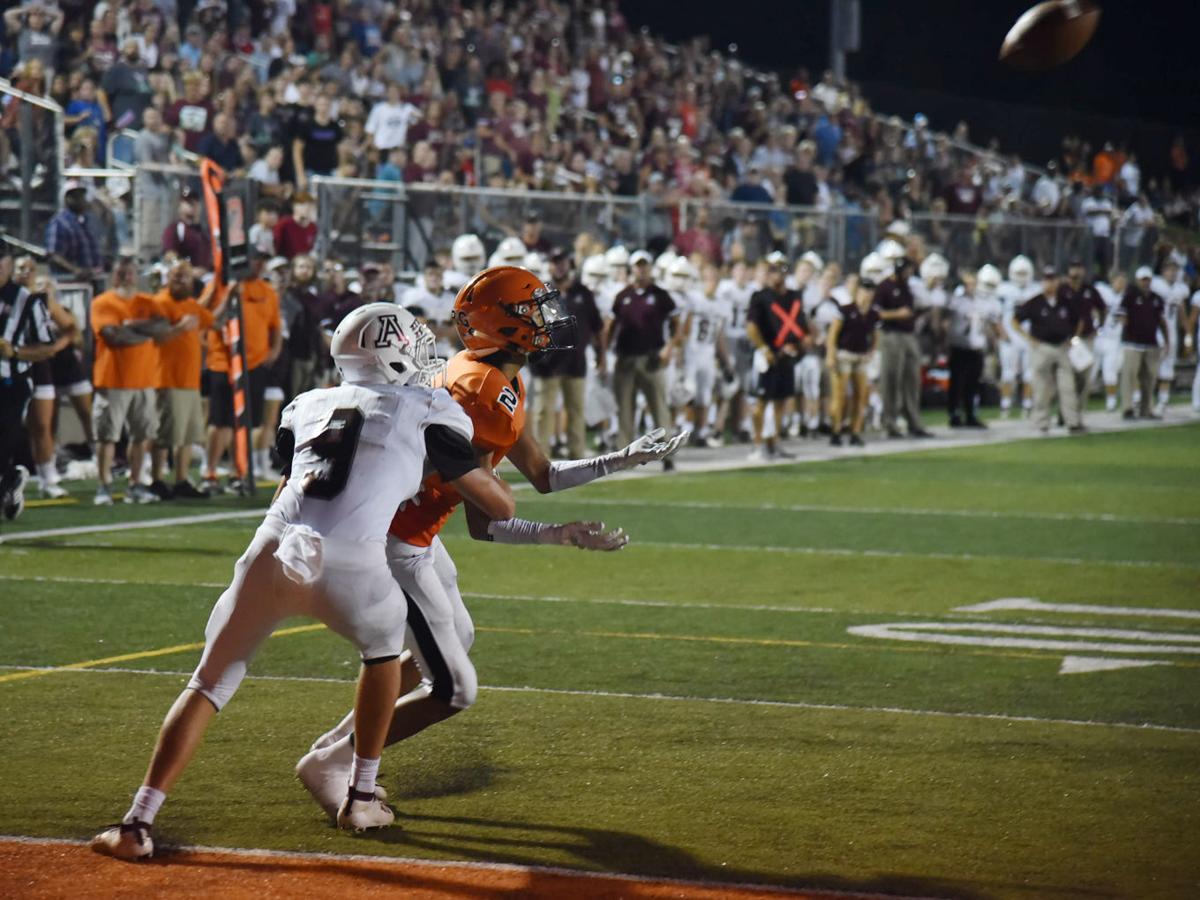 Ashland's Caleb Tackett gets a hand on Wheelersburg's Carson Williams during the second quarter. KEVIN GOLDY | THE DAILY INDEPENDENT

Ashland's JT Garret gets away from Wheelersburg's Gage Adkins during the second quarter. KEVIN GOLDY | THE DAILY INDEPENDENT

WHEELERSBURG At about 9 p.m. on Friday, a wind-whipped black canopy top went flying off the top of the press box at Ed Miller Stadium, sailed through the night sky and found a Wheelersburg fan in the nearly emptied home bleachers.

Within the next hour and 49 minutes, Braxton Sammons sent two placements similarly high and far through that same night sky to power the Pirates to a historic victory.

Sammons’ 45-yard field goal on the final play of regulation lifted Wheelersburg into a tie with Ashland. The next time the sophomore kicker took the field, he untied it.

Sammons’ overtime extra point a play after Makya Matthews’ 13-yard scoring run on fourth-and-3 gave the Pirates a 34-33 victory over the Tomcats.

It was the first meeting between prominent programs from opposite sides of the Ohio River who have combined for 1,258 victories and four state championships recognized by their respective states’ high school sports governing bodies. And even if both teams might have had spells of the game they’d like to have back, the drama lived up to its billing.

“I look for this to be a game that people will circle on their calendars for years to come,” Wheelersburg coach Rob Woodward said.

Ashland helped ensure that with a frenetic rally. Down 24-13 when they took possession with 8:23 to go in regulation, the Tomcats cut their deficit to one score when Keontae Pittman danced into the end zone from 6 yards out with 6:38 to go. The pass sailed high on the two-point try, but Ashland was within five.

The Tomcats forced a Wheelersburg punt just over two minutes later and took over at midfield when the Pirates committed a personal foul on the punt.

Nine plays later, Ashland faced a fourth-and-17 from Wheelersburg’s 34. The Tomcats converted it when Jake Gregg found JT Garrett open over the middle to the Pirates’ 1.

Blake Hester scored his third touchdown of the night two plays after that. Gregg then connected with Hester for the two-pointer, giving Ashland a three-point bulge with 44 seconds to play.

That proved to be too much time. The Pirates converted a fourth-and-14 on Aaron Masters’ 17-yard completion to Matthews to the Ashland 43. A Hail Mary heave two plays later yielded a Tomcats pass interference penalty, and Sammons lined up for a 45-yard field goal with three seconds showing.

He nailed it, forcing overtime.

Ashland’s offense took the field first, and three Hester carries yielded six points. The momentum died there. The Tomcats, coming out of a timeout, elected to go for two, and Hester was stood up for no gain.

“I’m a guy that’s gonna try to win it right there,” Ashland coach Tony Love said of sending the offense back onto the field. “That’s the way I’ve done it since I became the head coach, and I just told these guys I believe in them. I still believe in them, and we were controlling the line of scrimmage. It wasn’t like we were eking it in.

“I felt like we were gonna be able to get that done, and (Wheelersburg) cut us down and made a pile and just got a little bit of penetration right there and tripped us up short of the goal line.”

Ashland’s defense forced Wheelersburg into a fourth-and-3 situation on the ensuing drive. Matthews made it moot, taking the Wildcat snap and running 13 yards for the game-tying TD.

Woodward credited Pirates offensive coordinator Tom Kaskey for the play call. Sammons came out and nailed the placement to help Wheelersburg avoid what would have been its first 0-3 start since somewhere between 1964 and 1971, as well as averting its first four-game skid (the Pirates had dropped three in a row dating to last year’s state semifinals) since 2001-02.

Ashland (3-1) broke on top, 13-0, on two Hester TDs. He ran for a 7-yard score with 3:27 to go in the first quarter, and he picked off a pass at his own 2-yard line on the Pirates’ next trip and set sail 98 yards, meticulously reading his blocks en route to a pick-six.

The Tomcats didn’t get much done offensively after that, though, until they were in full rally mode.

A lightning delay of 63 minutes midway through the third quarter didn’t help matters. Wind kicked up and drizzle showed up, but both cleared out, along with the lightning, to allow the game to continue.

Ashland, which boasted the ninth-best rushing defense in Class 3A (86.0 yards allowed per game) entering the contest, held up well against a Wheelersburg attack which aimed to ground and pound in the second half. The Pirates’ only completion for positive yardage after halftime was the desperation 17-yard Masters-to-Matthews fourth-down toss that extended Wheelersburg’s last-ditch drive.

Masters threw for 177 yards and TDs to Matthews and LJ Payton. Wheelersburg (1-2) freshman lineman Seth Denney fell on a fumble in the end zone after Ashland muffed a punt with 9:44 to go in the third quarter.