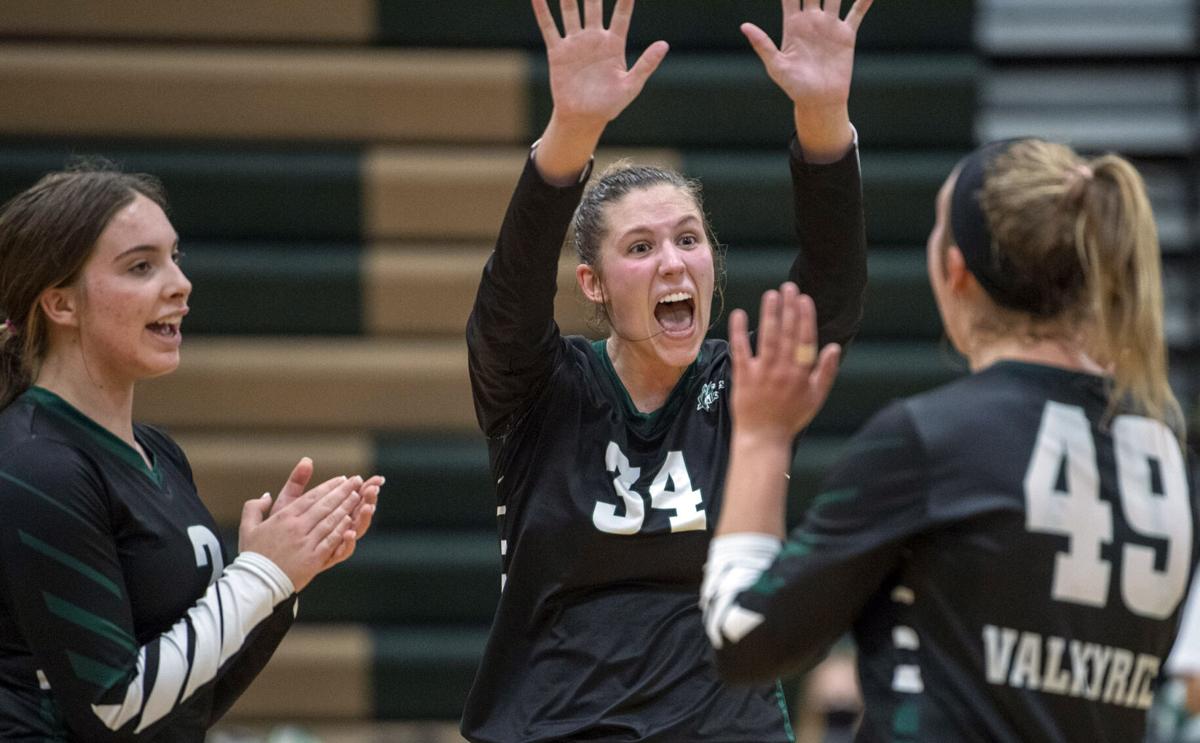 Rowan County’s Brooklynn Adams, left, Bailey Brashear (24) and Madison Roar (49) celebrate coming from behind to tie in the final game against Fleming County in the 61st District Championship match at Rowan County High School in Morehead, Ky. Photo by John Flavell / For The Daily Independent 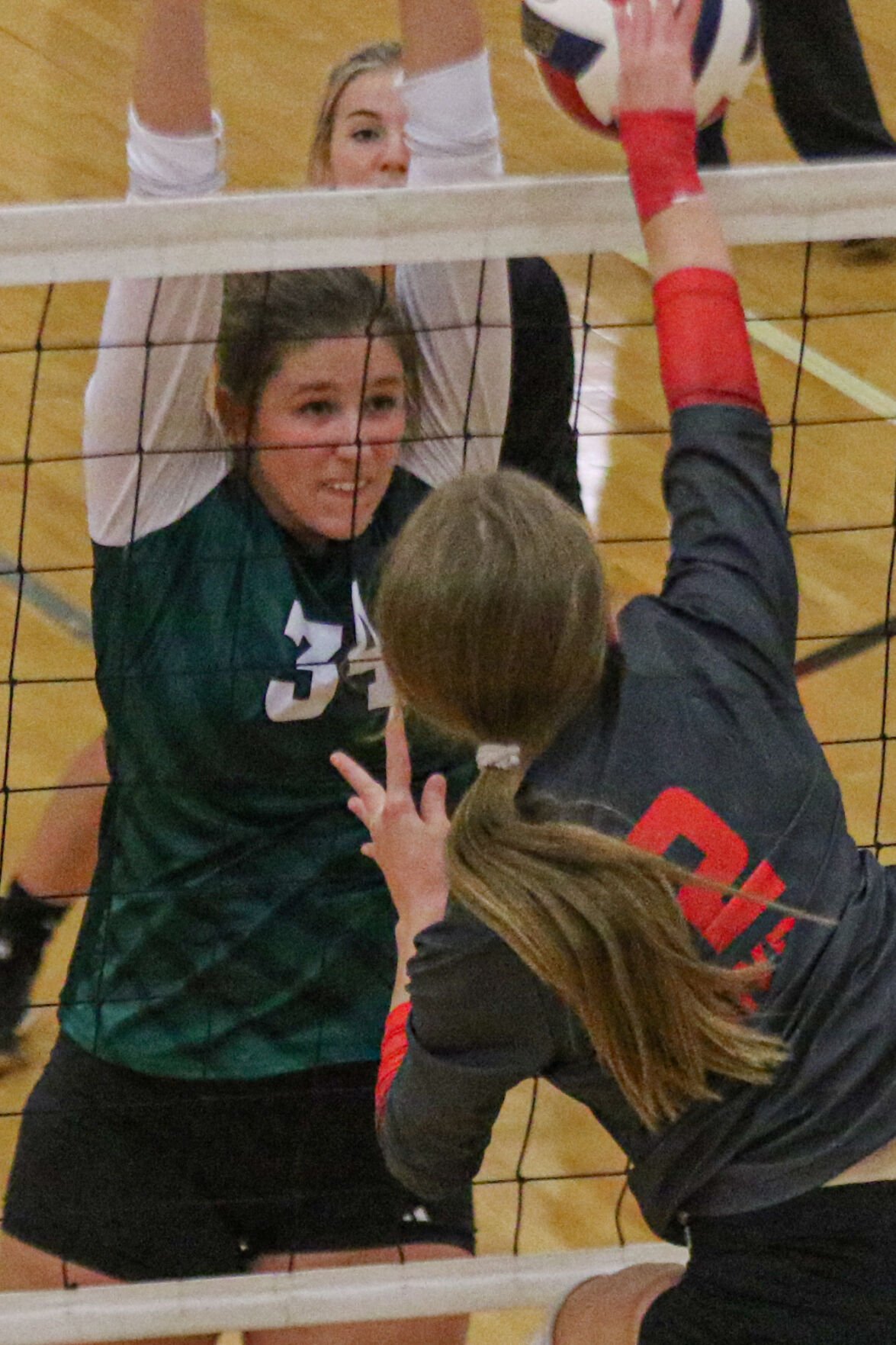 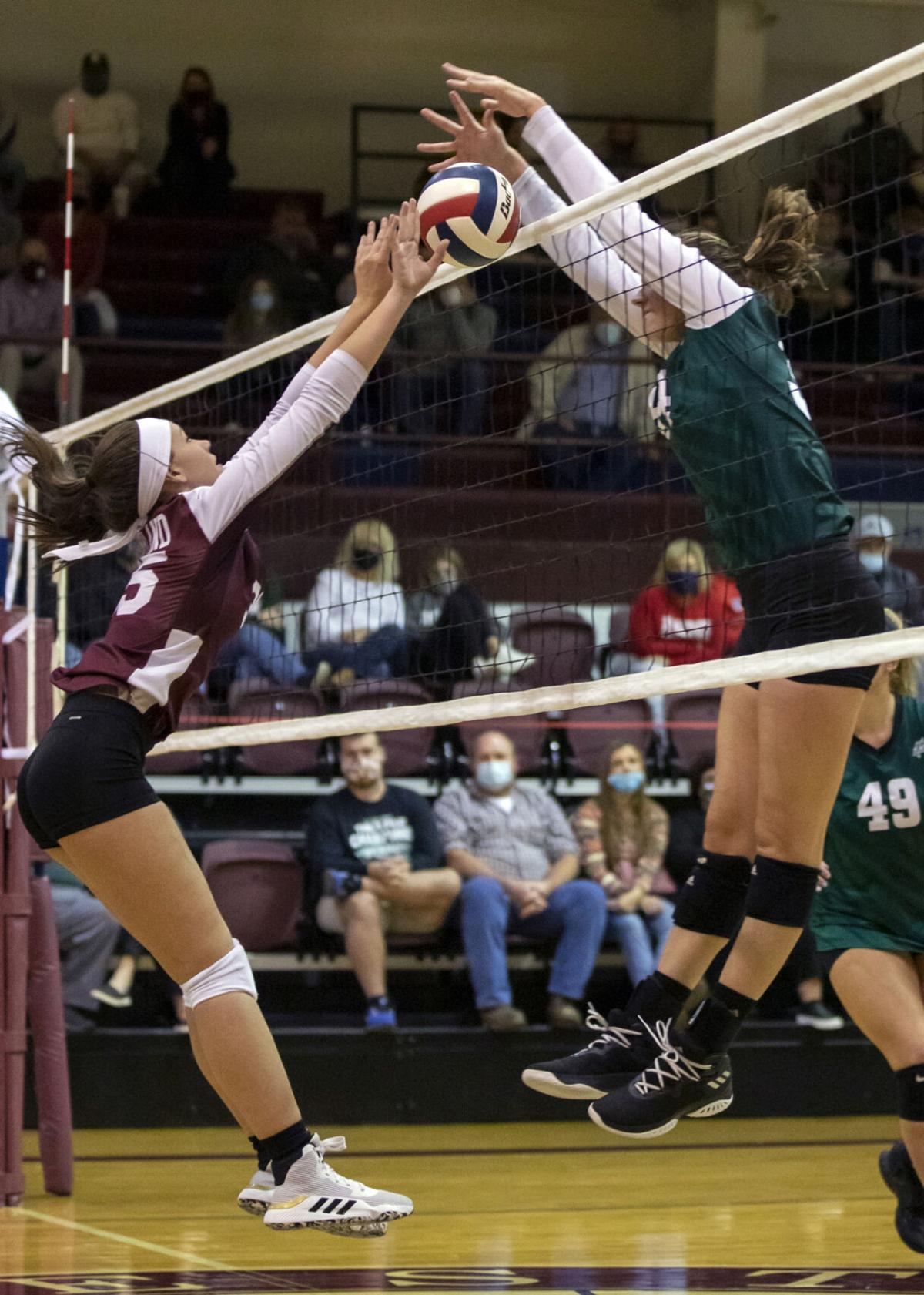 Rowan County’s Brooklynn Adams, left, Bailey Brashear (24) and Madison Roar (49) celebrate coming from behind to tie in the final game against Fleming County in the 61st District Championship match at Rowan County High School in Morehead, Ky. Photo by John Flavell / For The Daily Independent

MOREHEAD Bailey Brashear almost gave up volleyball after one practice.

Rowan County is glad she didn’t.

Brashear, a 6-foot senior middle hitter, leads the Valkyries in kills (she had 94 headed into Wednesday’s Kentucky 2A game with Floyd Central) and blocks (20) and is second in digs (60) to Sydney Hallock’s 85.

“I played basketball growing up,” Brashear said. “I liked it all right, but for some reason the day I started playing volleyball, it’s just different. I felt more comfortable playing.

“It’s a sport about momentum, and I like that a lot about it. Basketball’s not really the same.”

Brashear took up volleyball in fifth grade at Lakeside Christian Academy in Morehead – at least partly to silence coaches and seemingly everyone else in the building.

“I went to a smaller school, and (people) were, like, ‘you’re so tall, you should play volleyball,’ and so that’s what I did.” she said.

“I noticed that a lot of things she was doing, she was naturally doing correct, even though she didn’t know what she was doing,” Coyle said. “She could block and find the hitter. The way she would move her hands in a block are things you just instinctively do without even having to teach it.”

“I started crying, and the whole way home I cried because I was so upset that I wasn’t good. (Mother Amanda Brashear) said just stick with it for a couple weeks and see how you like it; a couple weeks, and I fell in love.

Brashear considers herself a bit of a perfectionist, both on the court and in the classroom.

“This year I’m actually struggling because it’s senior year. I’m taking three college courses. I feel like I’m not doing enough. I’ll come home, and I have no homework, and I’m stressing out because I feel like I should have homework.”

Coyle recalled a sequence in the Valkyries’ first-round loss to Greenwood in the 2018 state tournament.

“She had about four or five points where she terminated the points straight up; I mean, she was dominating the net,” Coyle said. “They called a time-out; they restructured their offense a little bit to get the ball away from her. … Just seeing the joy and the sheer love of the sport at that moment was awesome.”

After the first point of each set, volleyball players rotate positions before serving. Brashear said outside hitter is not her favorite spot.

“A lot of teams will have a stronger block on the outside, and so you have to work harder to find a way around it,” she said. “It’s kind of why I don’t like outside; you usually have a double block instead of a single.”

Brashear said a good middle hitter has to do three things well: move, move quickly and look for tells that reveal where a setter’s sending a pass.

Digs, meanwhile, are a challenge – partly because Brashear’s so tall.

“Back row frustrates me a lot; it’s fun when I get up a good pass, but you get a lot more recognition when you’re hitting,” she said. “Reading a serve and a hit is just really different than just reading a blocker, and you have to do that a lot more in the back row.”

Brashear has also played on summer travel club teams. She finished her fourth year with Lexington United, and she was a part of Appalachia Rising as an eighth-grader.

“She is vocal from a teaching standpoint. She’s got a fair amount of club experience,” Walters said.

When Brashear is frustrated over something during a match, you can see the nonverbal clue: crossed arms, eyes rolled back, head tilted to one side.

“Thing is, she is just as liable to do it to herself, and even more so,” Walters said.

Rowan County’s celebrations after a point can be physically dangerous. The Valkyries often imitate Seinfeld’s Elaine Benes’s “Get out!” scream when they exuberantly push each other.

“They push the fire out of each other,” Walters said. “I’m like, be careful. Somebody’s not ready for that.”

“It’s difficult,” she said. “It’s hot outside. I’m an outdoors person, but I’m not an outdoors sports person; and, sand’s sticky and messy.”

Brashear works out twice a week at a gym in Morehead. She focuses a lot on improving her vertical jump.

“Starting, it was tough,” she said. “I struggled for several weeks … I was weak, I was really weak. I like being good at things the first time, and I wasn’t.”

Brashear would like to play collegiate volleyball. She wants to study business or finance and maybe coach after that. She thinks it will always be hard to relax.

“I’d like to pursue a normal life,” she said. “I don’t want to stop getting better at what I want to do.”