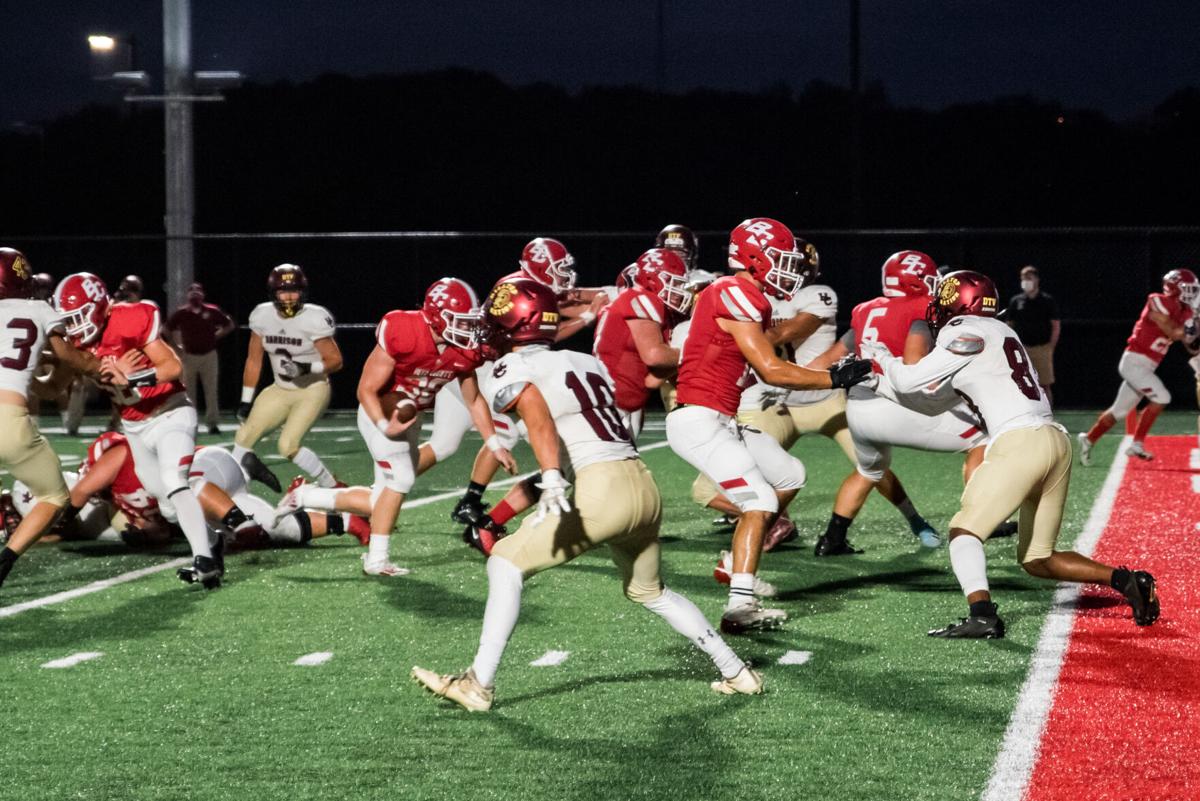 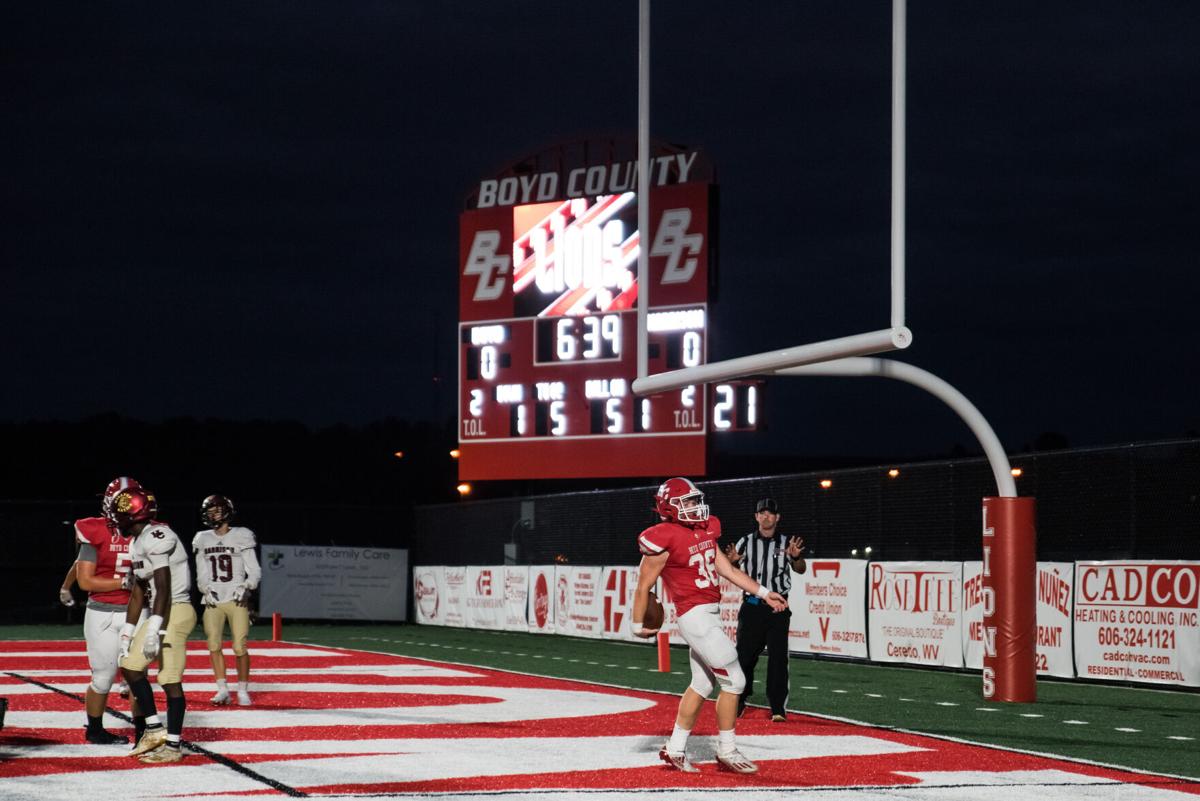 Carter Stephens celebrates his first touchdown of the night against Harrison County. 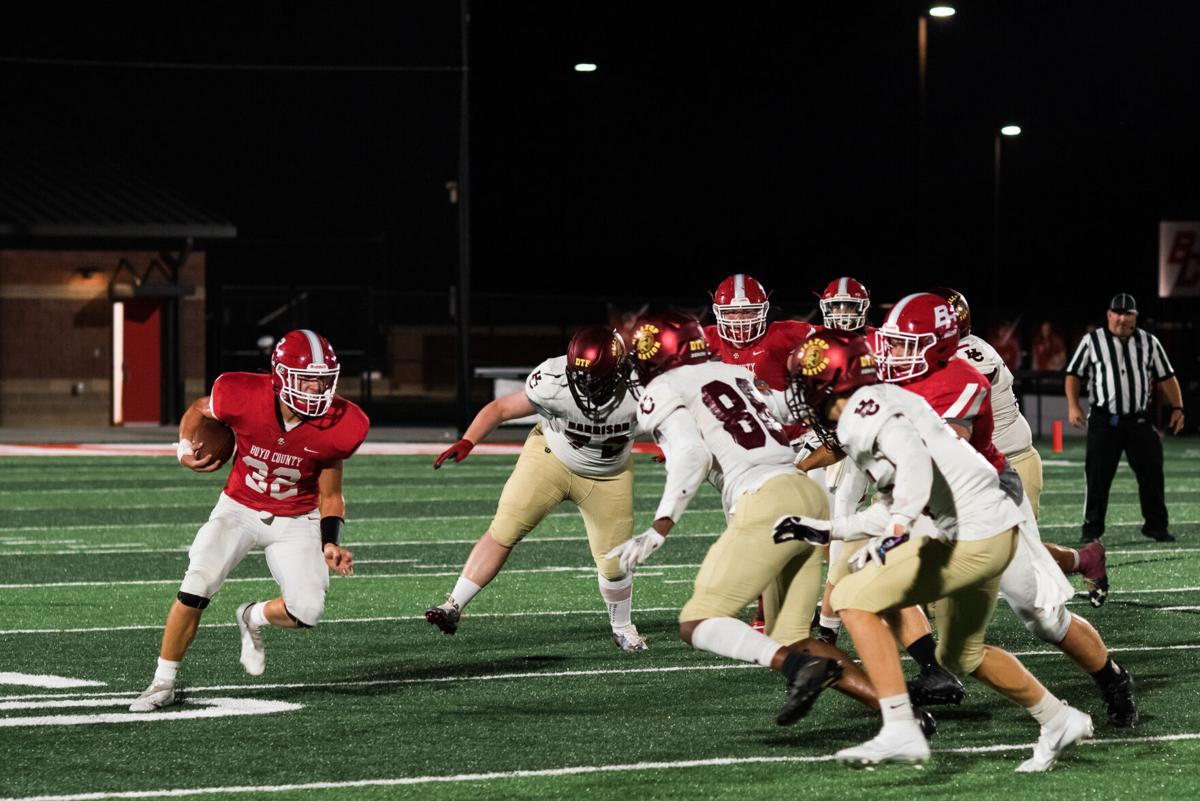 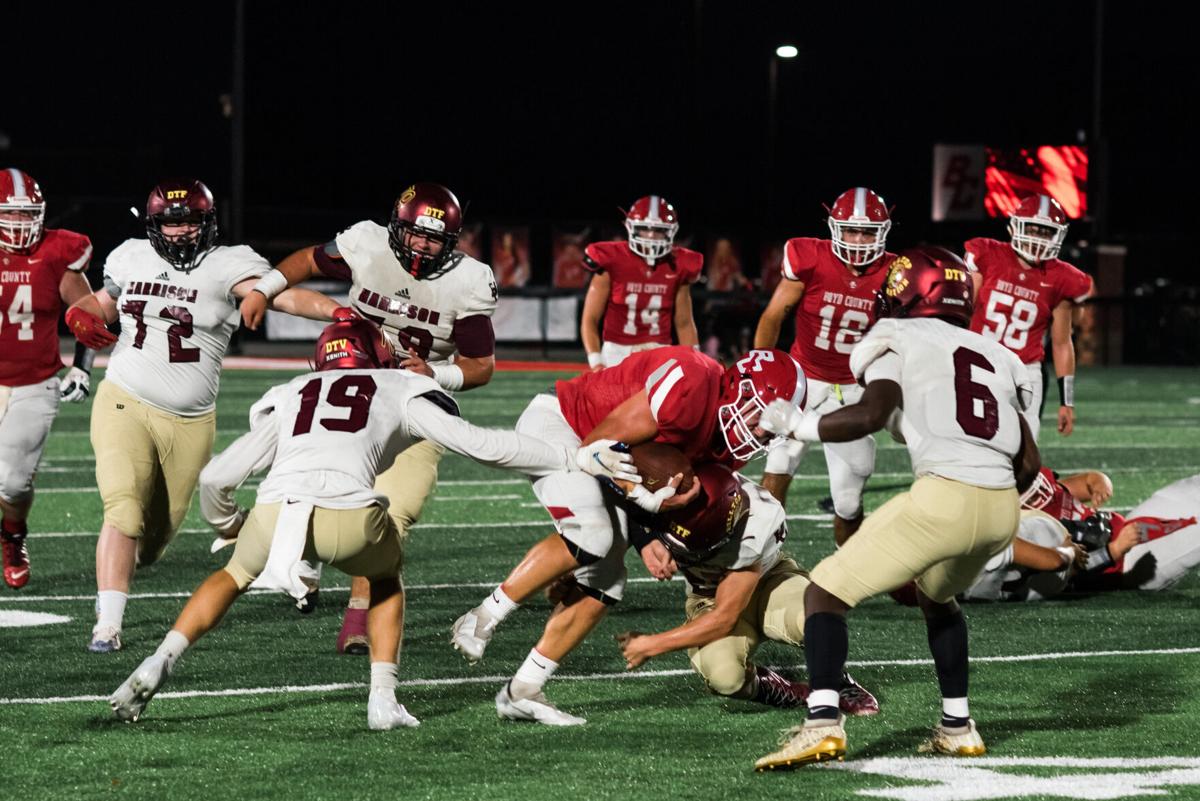 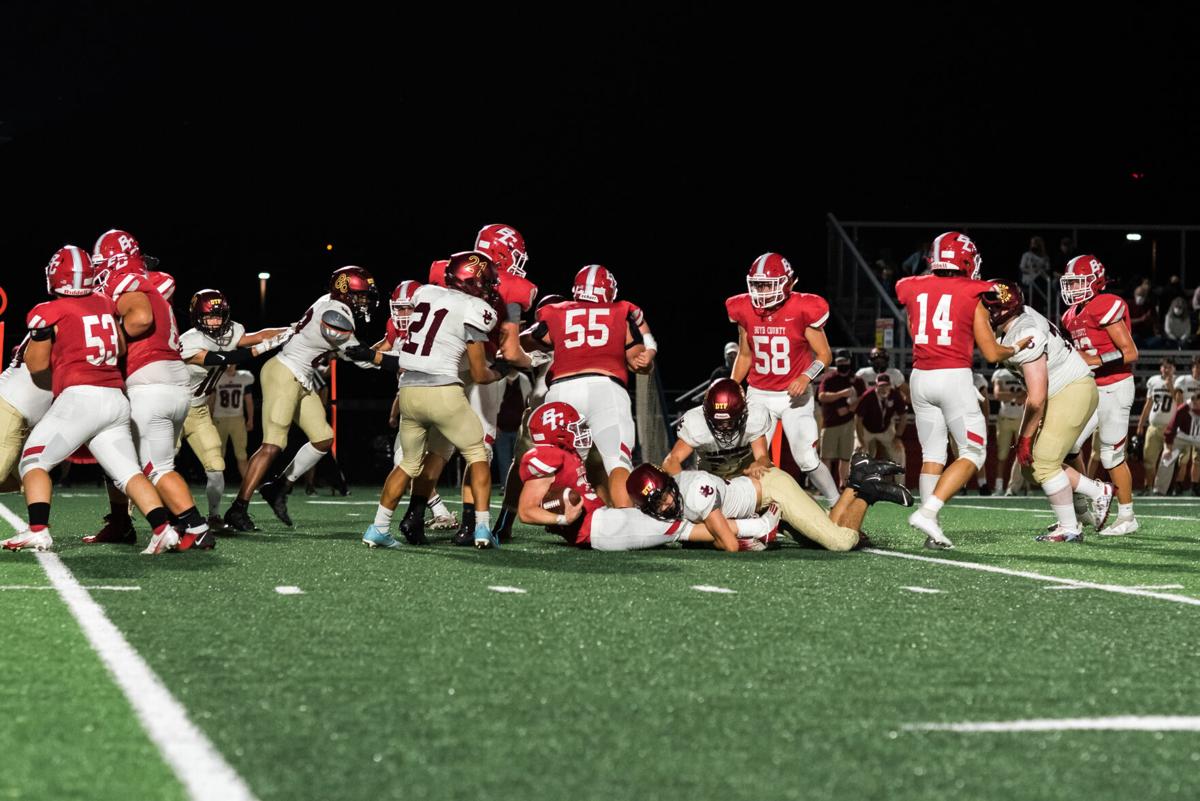 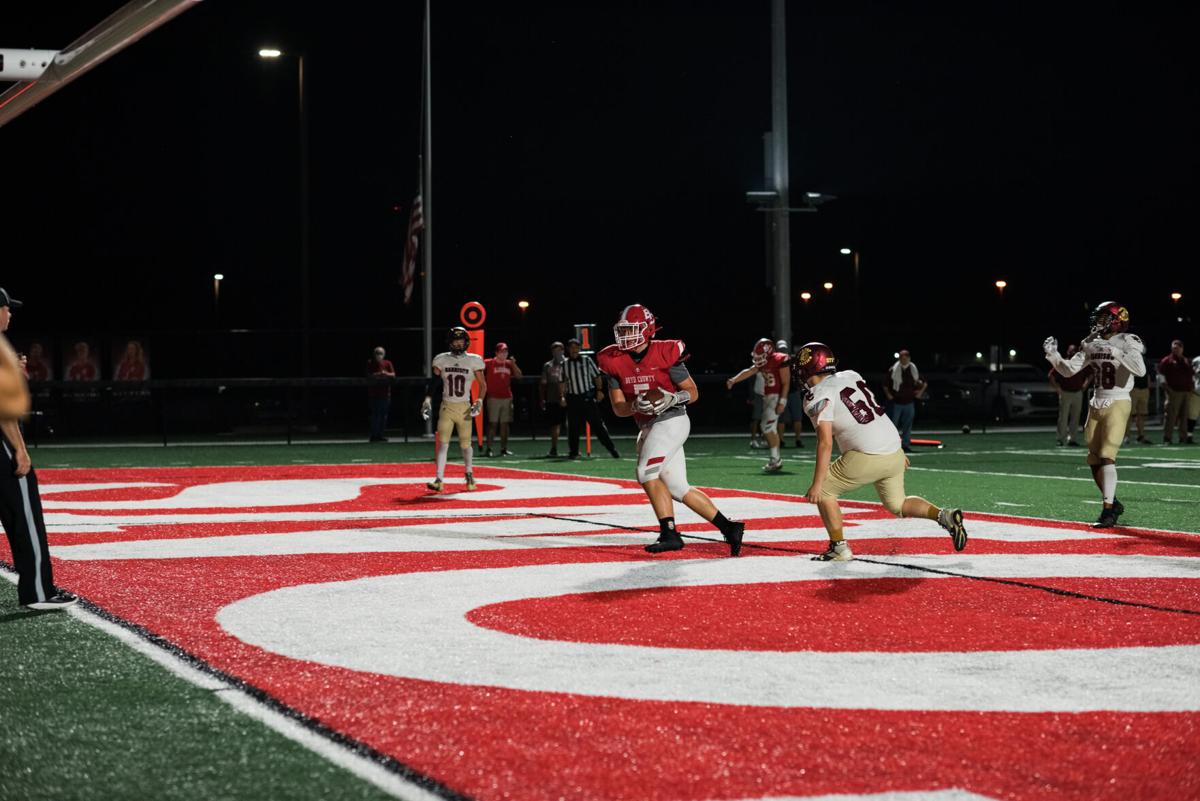 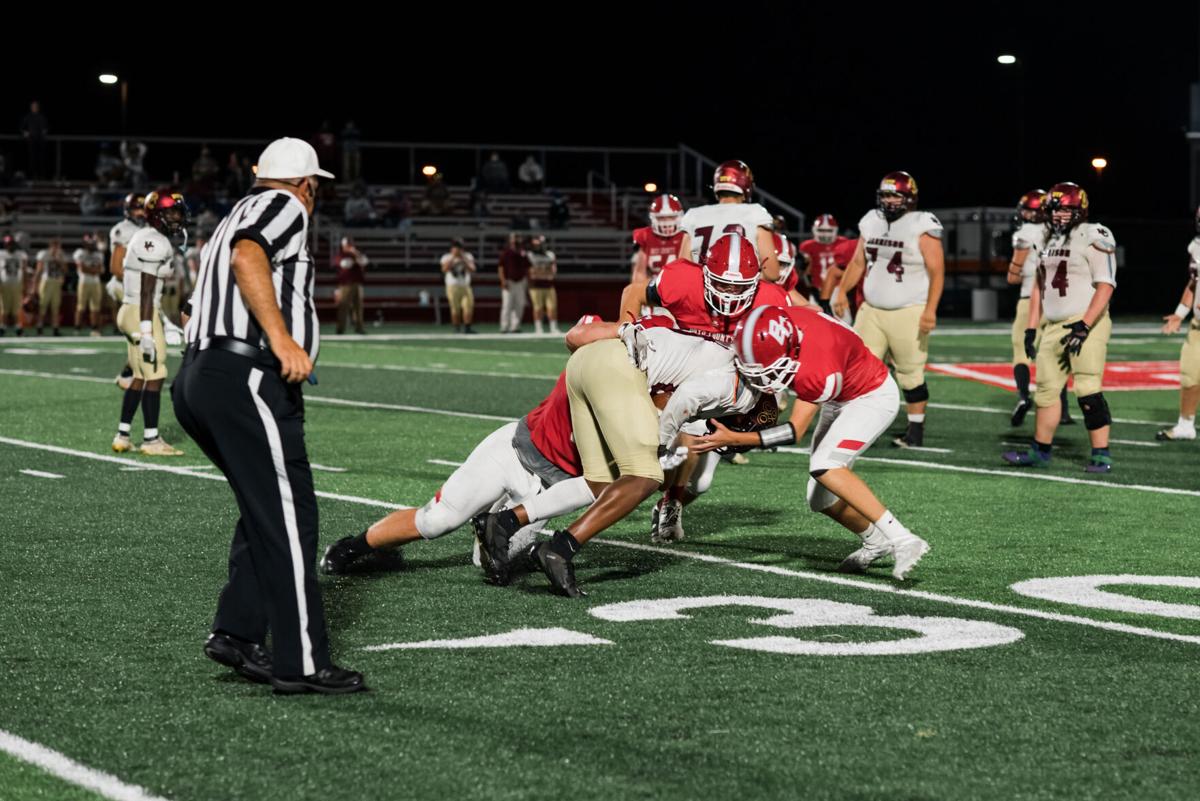 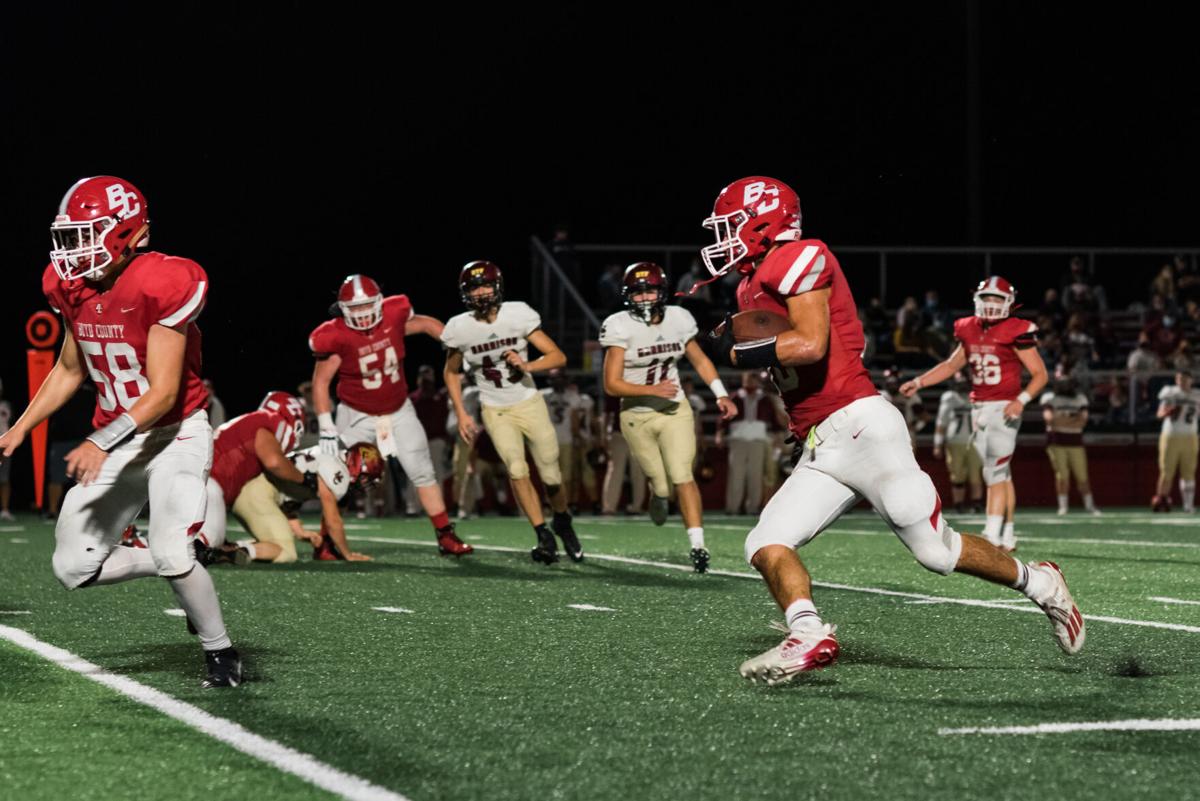 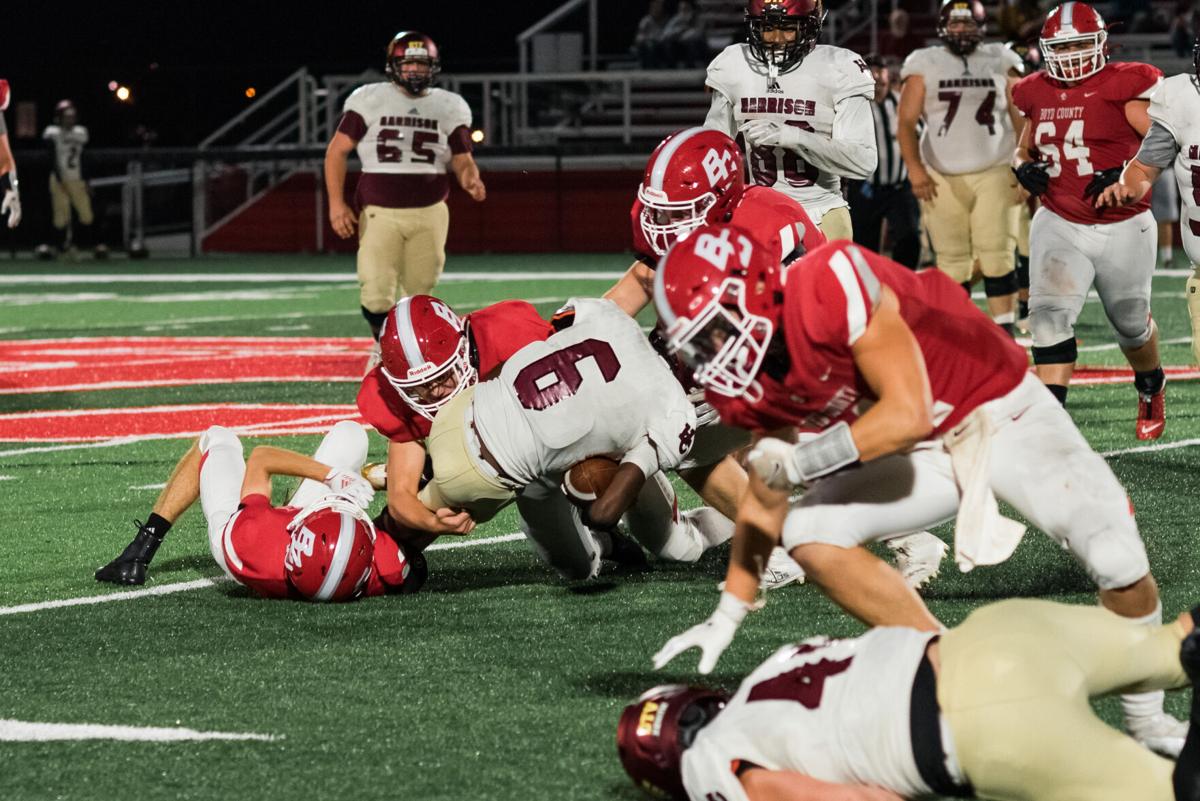 Carter Stephens celebrates his first touchdown of the night against Harrison County.

CANNONSBURG Carter Stephens’ stats through the first two games were a little deceiving.

The Boyd County senior had only one carry entering Friday night’s early season district tilt with Harrison County. The fullback was used as a blocker in the offensive scheme.

Coach Evan Ferguson changed the game plan during the week and installed the Wing-T against the Thorobreds. Stephens showed off his horsepower, carrying the ball 23 times for 162 yards. He added two touchdowns in Lions 27-19 win at the Boyd County Athletic Complex.

“He has been a good player the whole time,” Ferguson said. “He has been playing really well. He always has his nose to the grindstone as a lead blocker. With the Wing-T, he gets to carry the football. We get to hit that inside trap a lot more. He did that well tonight.”

Stephens was ready to take on an increased workload. He said Ferguson showed a lot of confidence in him and was prepared with his coach called his number.

“Coach knew that I could do it and he believed in me,” Stephens said. “Our lineman worked their butts off all week. We knew that we had them down the middle. All week at practice we kept saying, get a push."

The offensive change worked so well that Boyd County did not have an official throw during the game. Quarterback Logan Staten did convert a two-point conversion through the air.

The Lions gained 391 yards on the ground with their fast-paced offense.

“We needed to get something a little bit quicker,” Ferguson said. “We went back to our Wing-T roots. That is big in football where I come from. It takes a lot of team chemistry and I was proud of the way they came together to do that.”

Boyd County (2-1) rattled off 11 straight runs as it marched down the field to open the game. Stephens culminated the drive with a 5-yard touchdown.

Harrison County answered right away with a short yardage score by LaDarius Conner. The speedster ran the ball for 208 yards on 17 carries.

The Lions regained the advantage for good with a 15-play drive that drained eight minutes off the clock. Jacob Kelley found a lane to the corner of the end zone for the first of his two rushing touchdowns midway through the second frame. He added another with a 5-yard plunge just before halftime.

Harrison County coach Ray Graham said the Lions switch in offensive philosophy may have caught his team off guard.

“They had a really good game plan,” Graham said. “(Staten) and (Stephens) ran really hard. They are good players. They were determined runners tonight. ... We haven’t tackled well in any of our games. We have to have a clear understanding of what we are trying to do. They looked good but we helped them with our lack of defensive technique.”

The Thorobreds could not capitalize on two separate occasions to tie the game. The Custard Connection of Kaydon and Tayshaun Custard hooked up for a 40-yard touchdown pass in the second quarter, but the ensuing extra point kick hit the upright and kept the score at 14-13.

Facing a fourth down and two from its own 12-yard line, Graham elected to roll the dice and go for it. Conner found the edge and sprinted down the sideline to paydirt 88 yards later.

“We weren’t stopping them and it was almost like we didn’t have a choice,” Graham said. “I told our offensive coordinator this morning our best play was that play. I called for the backside guard that I wanted to pull. He runs well. With their guys running upfield like they were to put pressure on the quarterback, it allowed LaDarius, who has a lot of speed, to get outside and go the distance.”

The Boyd County defense forced a turnover on downs late in the final quarter and allowed fewer big plays in the second half. Harrison County (1-2) attempted a two-point conversion after Conner’s long scoring run. A group of Lions converged on the Thorobreds running back and stopped him short of the goal line.

“We changed up our defense at halftime,” Ferguson said. “Hats off to our coaches for making the adjustments, slowing our defense down and telling them to just keep playing. Our kids fought through adversity and gave up some big plays, but the great job we did on their extra point attempts, it really paid off.”

The victory marked the first district win for Boyd County since 2016. It only motivates the team to achieve even more.

“It means everything,” Stephens said. “We are still going to go out and practice hard next week.”

“Coming back with a district win after a defeat last week when we did play our best, it shows the resilience and the intestinal fortitude of our team,” Ferguson added. “They keep sticking it out and keep coming to work every day. I am just extremely proud of them and this program.”