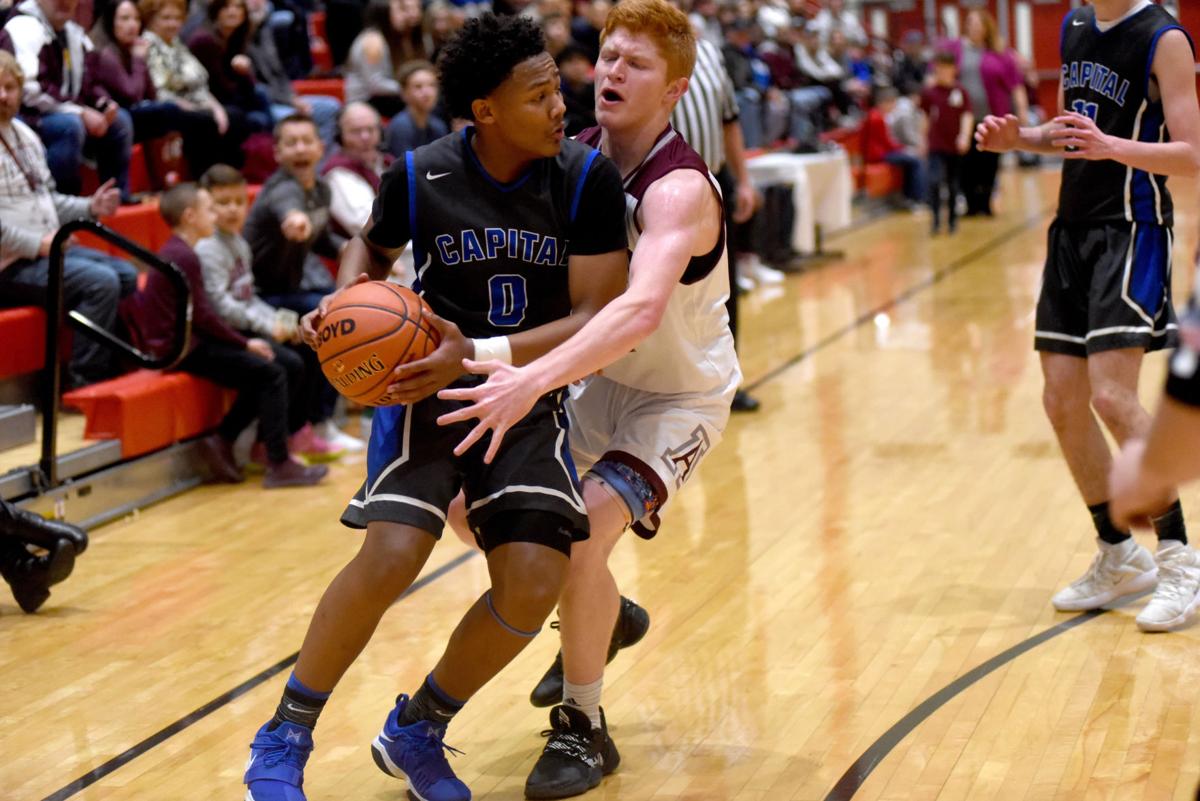 1216__Ashland__vs __Capital____005 Elijah Poore of Capital looks for a teammate as Justin Bradley turns up the defensive pressure. Don McReynolds | For the Independent 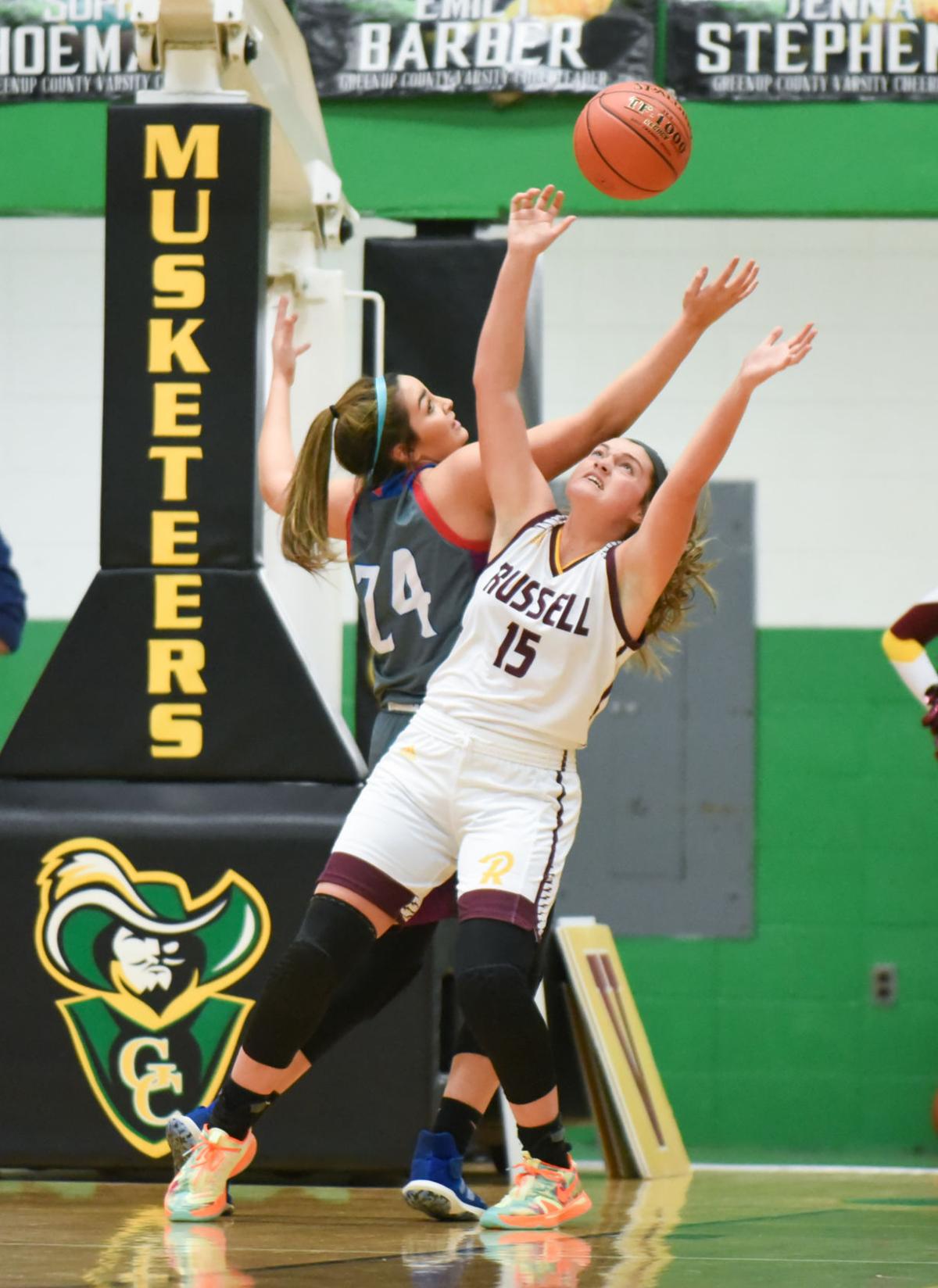 Russell's Kaeli Ross and Lewis County's Cheyenne DSouza battle for the loose ball on Thursday evening during the 63rd District Finals at Greenup County. MARTY CONLEY/ FOR THE DAILY INDEPENDENT

1216__Ashland__vs __Capital____005 Elijah Poore of Capital looks for a teammate as Justin Bradley turns up the defensive pressure. Don McReynolds | For the Independent

Russell's Kaeli Ross and Lewis County's Cheyenne DSouza battle for the loose ball on Thursday evening during the 63rd District Finals at Greenup County. MARTY CONLEY/ FOR THE DAILY INDEPENDENT

Jason Mays knew it long before it was official. Mandy Layne called it more than a month ago.

The KHSAA’s news release at 1:09 p.m. Tuesday confirmed what had long seemed apparent.

Ashland’s boys basketball team will forever be undefeated, but without the affirmation of a state title.

Hours away from the tantalizing chance to assert themselves on the Rupp Arena floor, the Russell Lady Devils’ indefinite suspension of play will never be lifted.

One day after Kentucky public schools closed for the rest of the year to in-person instruction at the direction of Gov. Andy Beshear in a measure to stop the COVID-19 pandemic, the KHSAA announced Tuesday the girls and boys basketball state tournaments — halted five games into the girls Sweet Sixteen — will not resume and neither will the spring sports season.

“Regarding our kids in our program, I don’t think anybody’s jaw is dropping after reading that,” said Mays, under whom the Tomcats authored the first undefeated season through the region tournament final in this region in 92 years. “I think that they’ve had perspective on this for quite some time now, at least a month, and I think our seniors have come to grips with the fact that they’ve played their last high school basketball game.”

It might hurt more for Layne and her charges. The Lady Devils were in the building for the first game of the second day of the Sweet Sixteen’s first round on March 12 — South Laurel’s stunner over Sacred Heart, which began at noon. Russell was to take the floor against Bowling Green at 6:30 that night.

It never happened. The KHSAA postponed the tournament indefinitely after the completion of the first contest of the day. It never resumed.

“It gives us a sense of closure,” Layne said of the news, “but it also gives us a bunch of sadness for our four seniors. To think they never received the opportunity to play at Rupp Arena, our thoughts and prayers go out to them. Beyond that, everything getting postponed for them (such as prom and graduation), we just really, really feel for them, and I know other players and families do also.

“The circumstances couldn’t be changed. Just having to deal with it.”

KHSAA commissioner Julian Tackett said in the release that the association will be in contact with teams that qualified for the Sweet Sixteen but didn’t get to play in it “about possible activities within the bylaws of the KHSAA at the start of the 2020-21 season if they desire that opportunity.”

That would apply to both the Tomcats and the Lady Devils.

Reached for clarification, KHSAA spokesman Joe Angolia said those activities will not take the form of a Sweet Sixteen at the beginning of next year’s calendar in July and that “preliminary” discussions have occurred on the matter.

“I’m assuming that’s, like, recognition and other things of that nature,” Mays said of the “possible activities.” “I’m not really reading into that that there’s gonna be a Sweet Sixteen. But again, that’s my assumption.”

Added Layne: “I don’t know the details, but I would be pleased if we got to play a game at Rupp Arena, at least, to honor the accomplishment. But I still hate it for the seniors because I know with (KHSAA) bylaws they can’t be there. And I don’t know what could be arranged, even if we were given that opportunity, if my four seniors could be there in some capacity. They were a huge part of getting us there.”

The final game for each team goes on the books as impressive victories. Ashland’s boys hit a 16th Region Tournament-record 17 3-pointers in an 84-60 victory over Lewis County in a region final that the Tomcats led by 40 points midway through the third quarter.

“For all of our kids to play so well and (tournament MVP) Kaeli (Ross) to step up in such a huge game and just to have the total team effort, it was just pure joy on our team for winning the region,” Layne said. “It’s just a memory that they’ll always remember.”

The Tomcats are planning a large-scale, ticketed public banquet to allow the community to celebrate the team’s accomplishments, Mays said. More details on that will emerge as social-distancing directives recede.

In the meantime, the returning Tomcats and Lady Devils are preparing for next season, although they still cannot gather as teams, and their programs have moved on to offseason activities.

“I know that our kids will have the same goal next year, and we’ll have a lot of participation as they right now continue to work out on their own,” Layne said.

Concurred Mays: “Our kids are working their butts off right now, which is pretty cool to see, in preparation for what lies ahead and next season.”