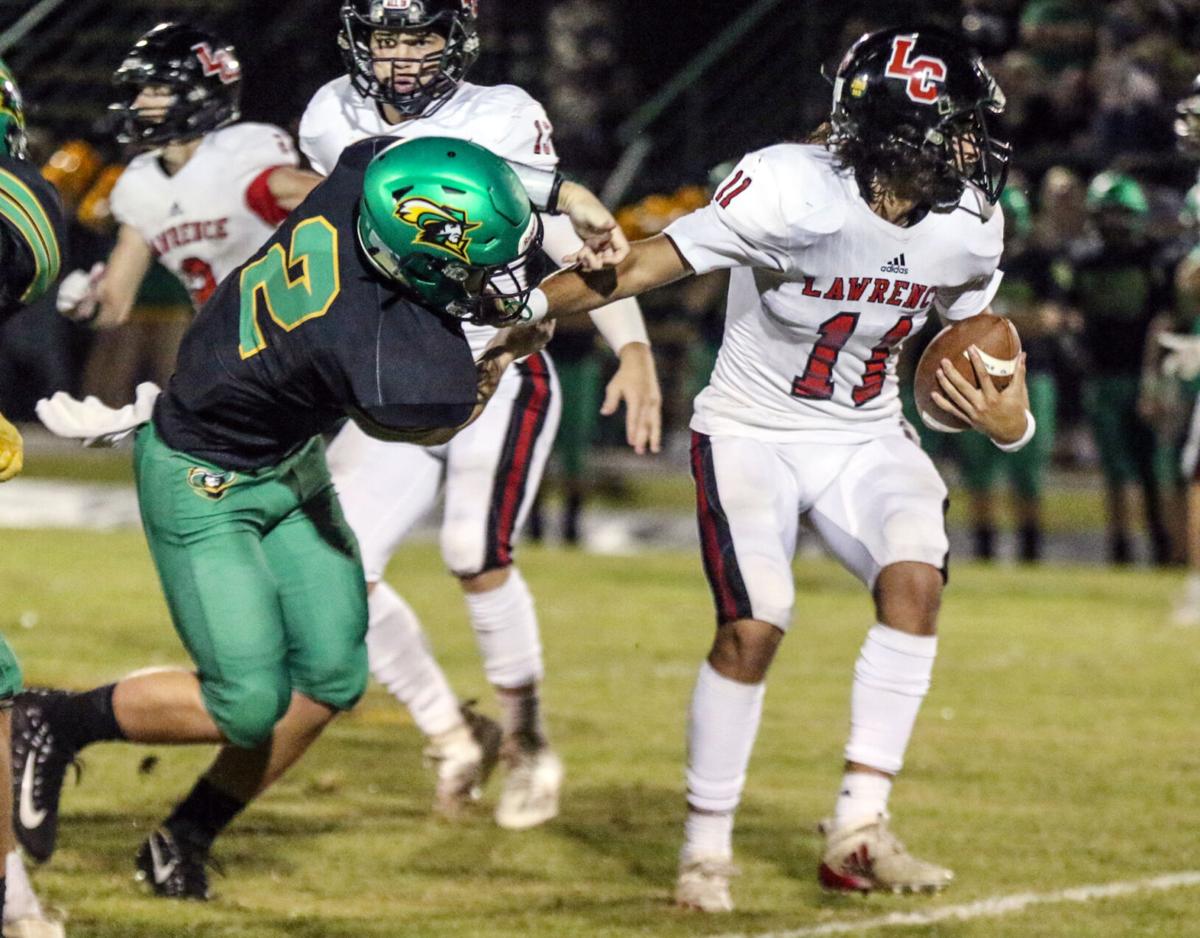 Lawrence County’s Alex Strickland spins out of the tackle attempt by Greenup County’s Tyson Sammons before finding the edge to scamper for a touchdown in the third quarter of Friday’s game. MATT JONES | THE DAILY INDEPENDENT 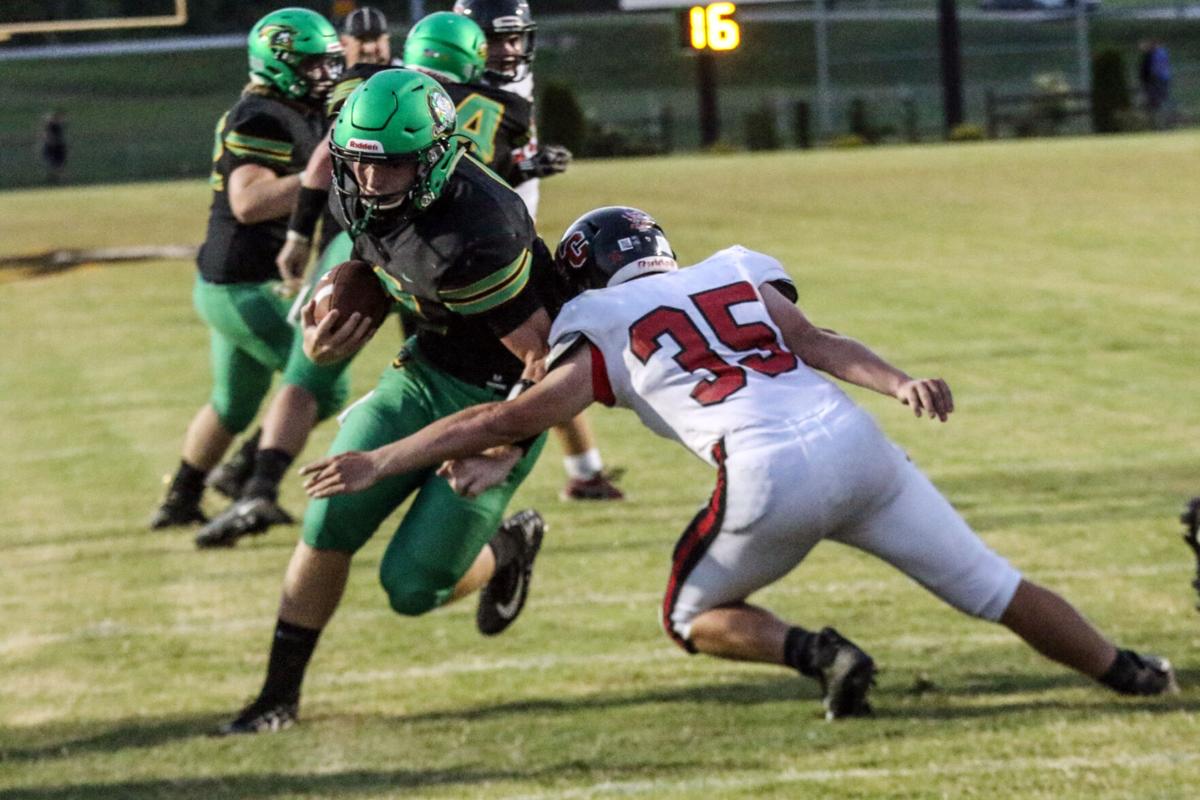 Greenup County’s Tyson Sammons avoids the tackle attempt enough to get by Lawrence County’s Cody Crum for a touchdown in the first half of Friday’s game. MATT JONES | THE DAILY INDEPENDENT 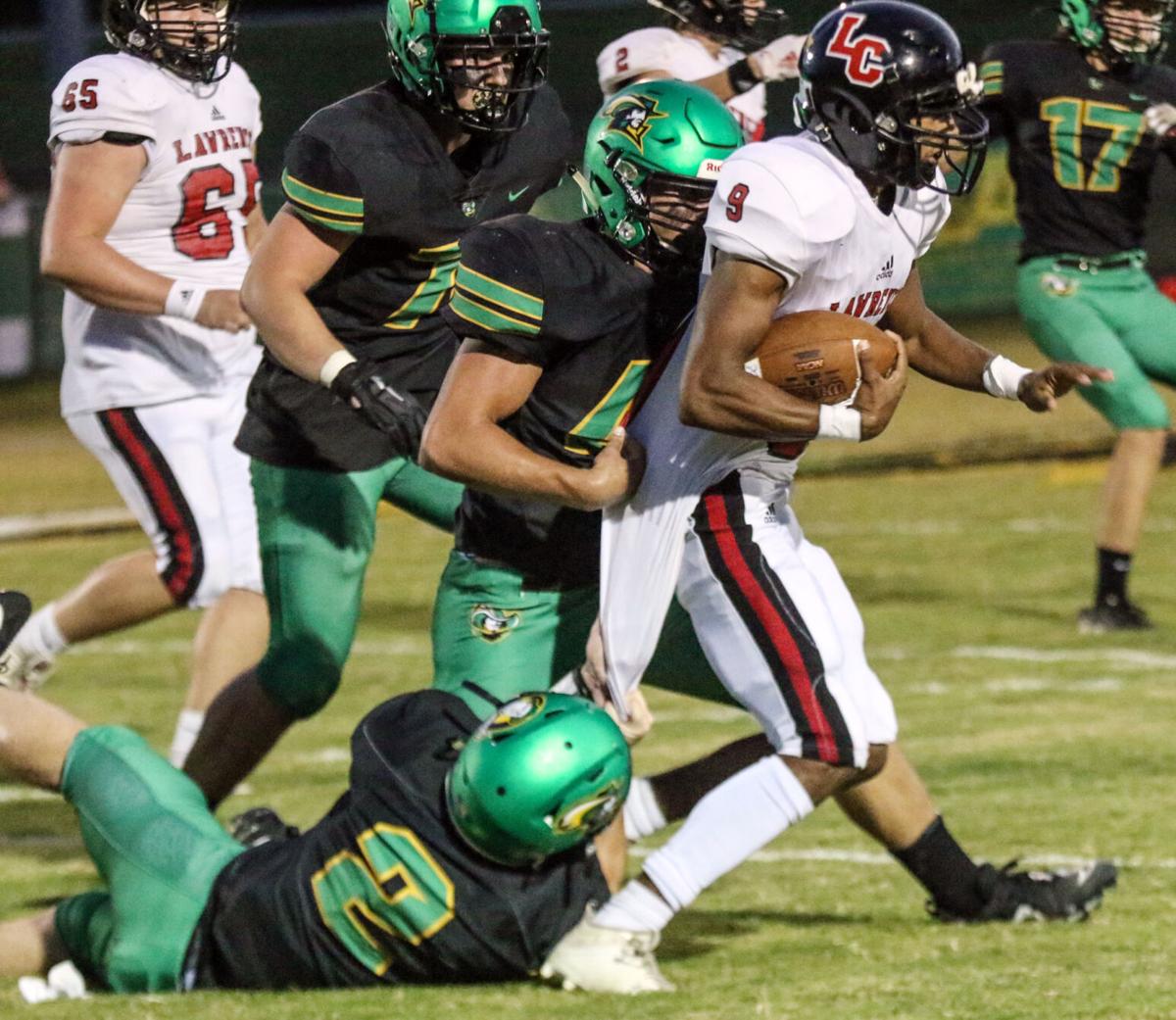 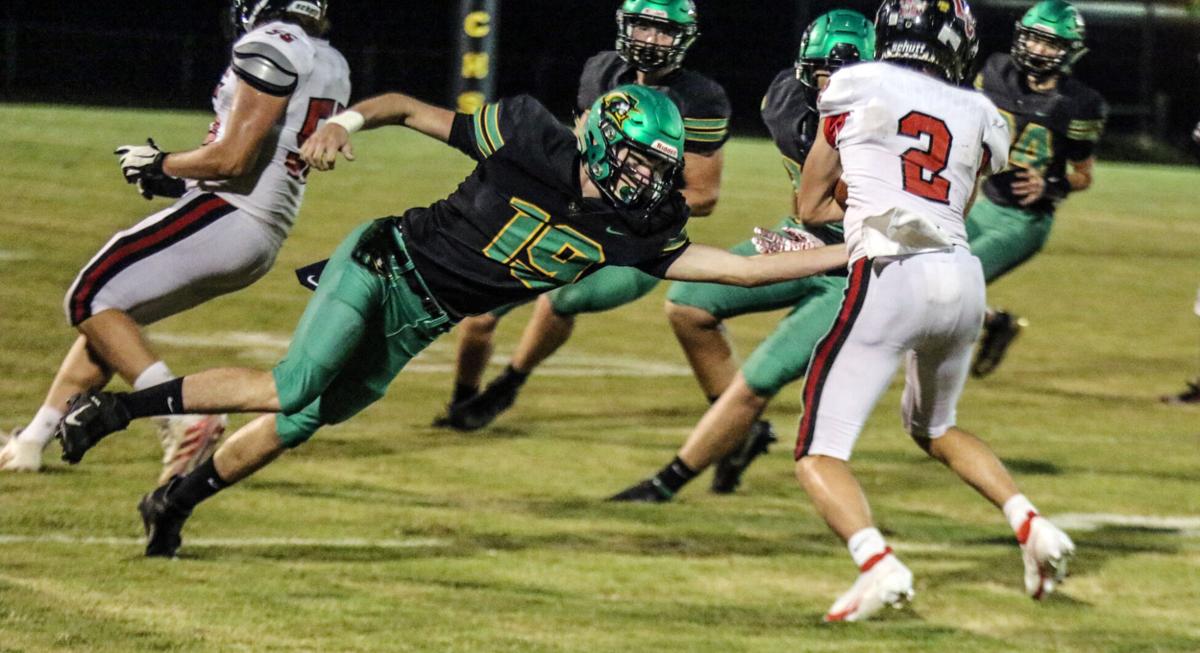 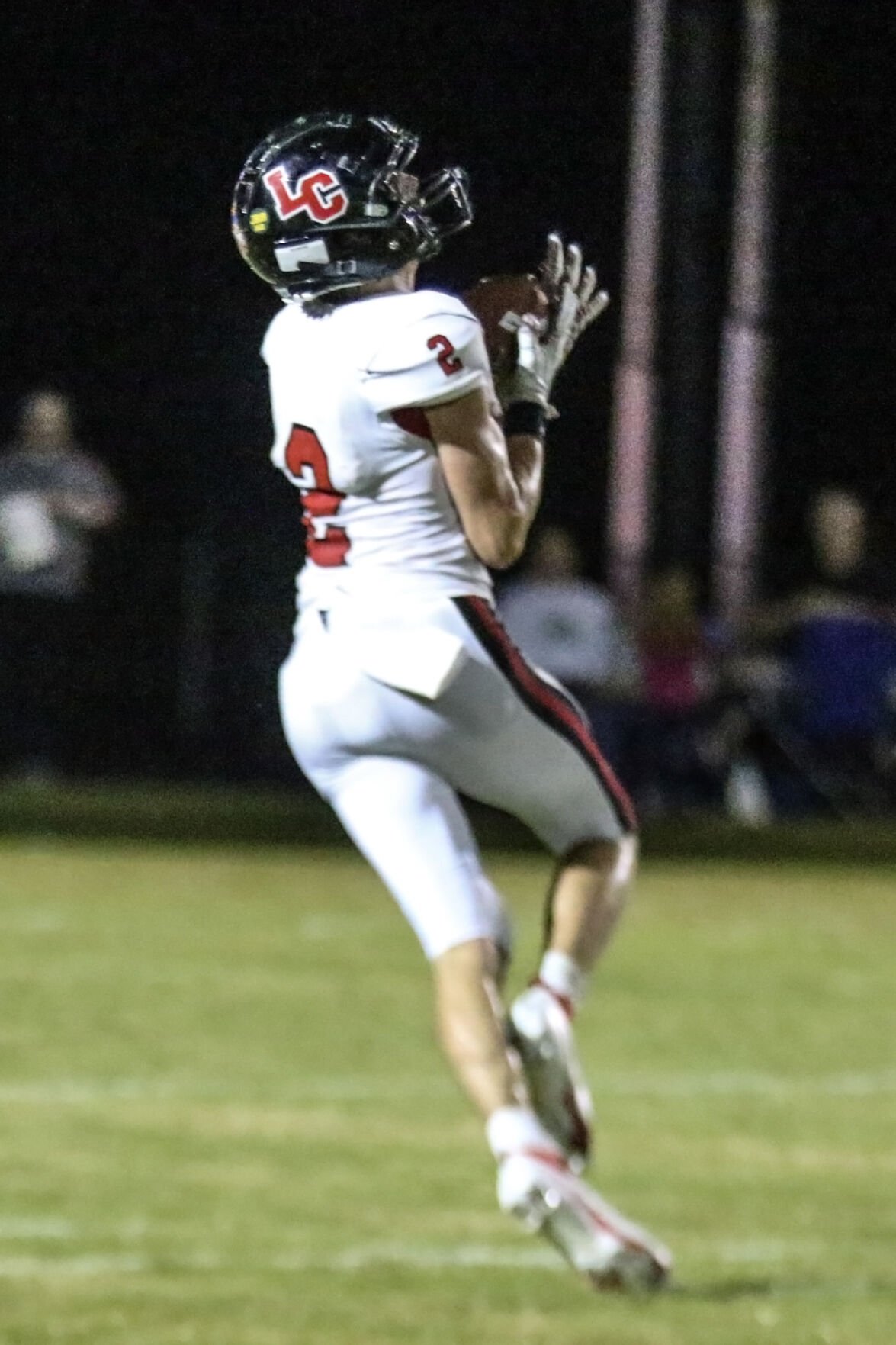 Lawrence County’s Kaden Gillespie hauls in a pass for a touchdown in the third quarter of Friday’s game. MATT JONES | THE DAILY INDEPENDENT 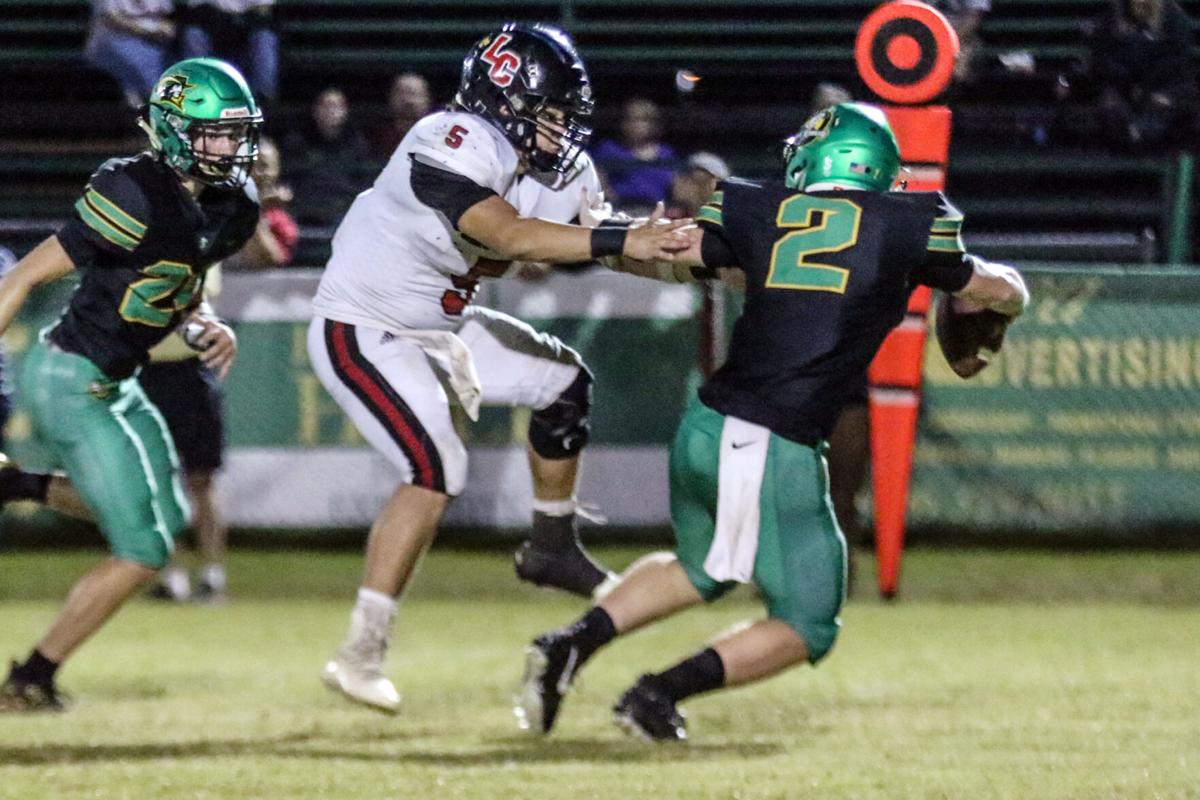 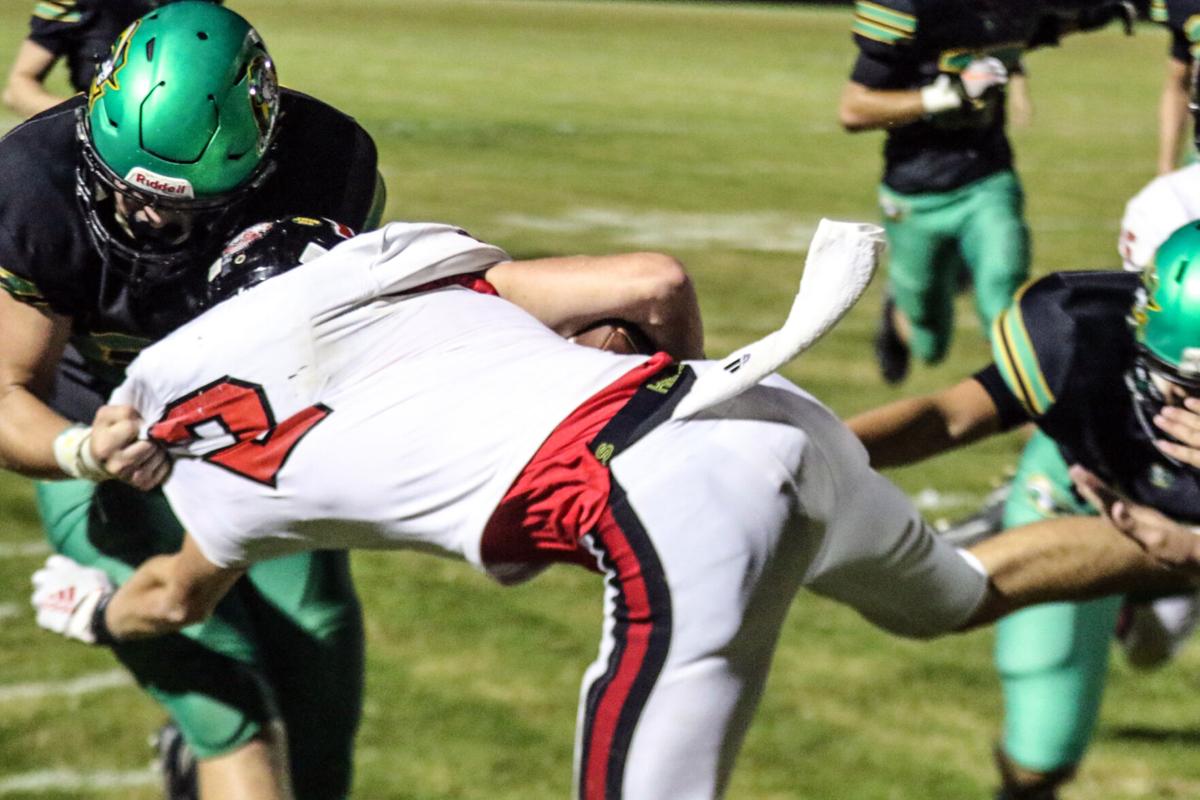 Lawrence County’s Alex Strickland spins out of the tackle attempt by Greenup County’s Tyson Sammons before finding the edge to scamper for a touchdown in the third quarter of Friday’s game. MATT JONES | THE DAILY INDEPENDENT

Greenup County’s Tyson Sammons avoids the tackle attempt enough to get by Lawrence County’s Cody Crum for a touchdown in the first half of Friday’s game. MATT JONES | THE DAILY INDEPENDENT

Lawrence County’s Kaden Gillespie hauls in a pass for a touchdown in the third quarter of Friday’s game. MATT JONES | THE DAILY INDEPENDENT

LLOYD After a sleepy first half offensively, Lawrence County needed only one play in the second half to get its offense in gear.

Bulldogs quarterback Alex Strickland kept the ball on the option and jetted 58 yards to the house on the first play from scrimmage of the third frame.

“I knew that we had to come straight out the gate swinging,” Strickland said. “(The first half) wasn’t our best half, but we came out and did what we had to do in the second half.”

Strickland’s sprint started a string of 27 unanswered points for Lawrence County, which had only one first down in the first half but got going in the second in a 34-7 victory at Greenup County on Friday night.

Strickland hooked up with Kaden Gillispie for a 57-yard TD, Douglas Hall ran for a 10-yard score and Blue Fletcher tallied from 58 yards out after intermission for the Bulldogs (2-0), who displayed a breadth of playmakers.

“We’ve had some really good teams here in the past, had really, really good players, but I don’t know if we’ve ever had this many that are this athletic and able to make plays in the passing game,” Lawrence County coach Alan Short said. “In the running game, we feel like we’re a four-back offense, and we’ve got four or five guys that can go get it (as receivers).”

Concurred Strickland: “It’s amazing. You can put it wherever you want to, and they go make the play.”

Lawrence County accumulated 344 yards of offense — all but 61 after halftime.

Greenup County, playing its season opener though it had officially been credited with a win last week after being idle the first two weekends of the season for COVID-19-related reasons, was tied 7-7 with the Bulldogs at halftime. Musketeers coach Zack Moore knew even then, though, Greenup County was in a precarious position.

“I wouldn’t mind playing this kind of offense if nobody could play very well,” Moore deadpanned, referring to the Bulldogs’ scheme, “but mix those guys in and then it just always seems like you’re hanging by a thread. I think that’s what it feels like defensively sometimes when you play a talented team that’s running something like the flexbone.

“And we had guys in position in the run game, and we just failed to make the play one-on-one, but you gotta give (Lawrence County) credit too, because their kids did make the play.”

The first half was completed in a cool 47 minutes. Both teams emphasized the ground game, as is their reputation, but also took to the air to set up ground touchdowns.

Lawrence County broke on top on Dylan Ferguson’s 6-yard TD at the 9:15 mark of the second quarter — one play after Nick Collinsworth chased down Strickland’s 42-yard toss.

Greenup County (1-1) countered when quarterback Tyson Sammons pulled it for a 6-yard scoring run with 2:29 to go in the first half. Five plays earlier, the Musketeers’ Ethan Kelley boxed out a Bulldogs defensive back for a 31-yard chunk play from the hand of Sammons, who made his first start under center.

“I couldn’t be more happy with what Tyson did,” Moore said. “(Musketeers offensive coordinator) Travis (Jones) did a good job calling the game to not put it all in his hands.

“When we want to throw and we keep people off-balance, it was very, very good. But (when) we have to throw, then we run into some problems. We have to do a better job playing ahead of the sticks when we can.”

Greenup County’s conditioning wasn’t exactly in midseason form, though, Moore said, due to the layoff. That exacerbated its challenges in accounting for the Bulldogs’ skill.

“I thought we were physical in the first half, but when we started getting fatigued, we started losing our feet, trying to dive and lunge,” Moore said, “and good athletes make plays. (Lawrence County has) got a few of them.”

And they made scoring plays of 58, 57 and 58 yards in the second half to help redeem a slow start offensively.

Fletcher ran four times for 86 yards and added a 22-yard catch, and Strickland carried two times for 62 yards and completed three of six passes for 121 yards.

“We certainly didn’t get in a rhythm to start the game, and it wasn’t the first-half showing that we wanted or expected,” Short said. “But hats off to our kids, they never lost faith or pointed fingers. We regrouped ourselves at halftime and came back out and played like we’re capable of playing.”

Greenup County observed a moment of silence before the game in memory of assistant coach Jamie Kennedy, who died last week. The Musketeers wore a helmet decal bearing his image on Friday.

Lawrence County passing: A. Strickland 3 of 6 for 121 yards.