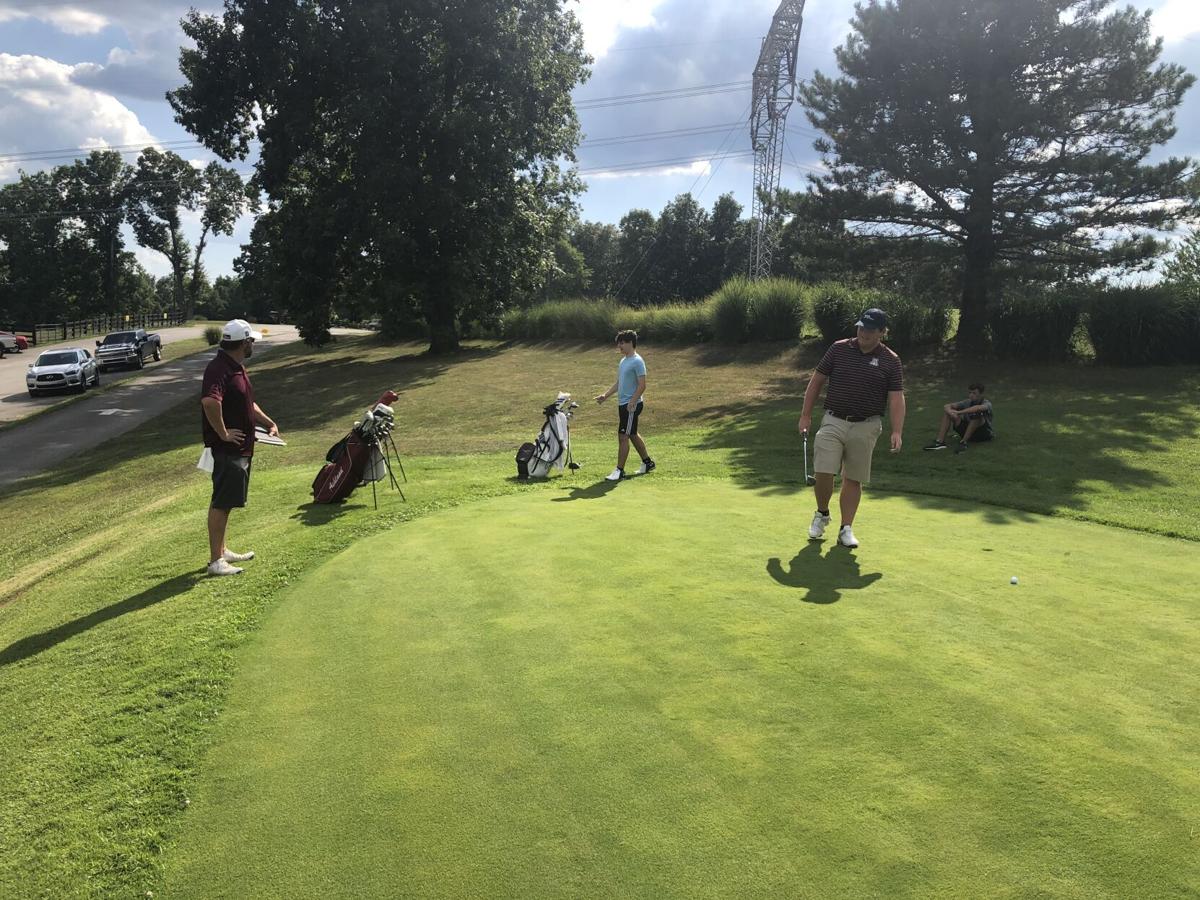 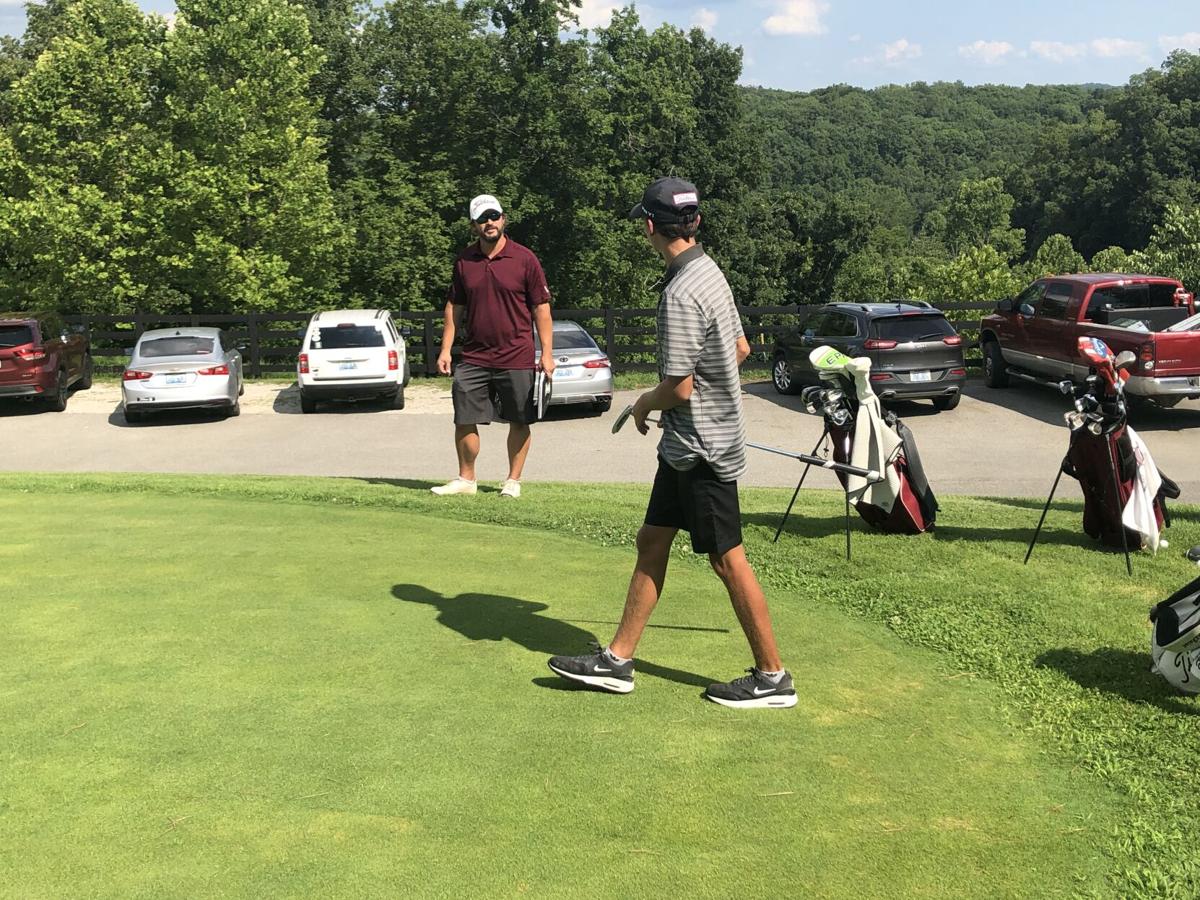 Ashland golf coach William Ferguson talks with Parker Miller on the green before a practice round on Tuesday at Diamond Links Golf Course.

Ashland golf coach William Ferguson talks with Parker Miller on the green before a practice round on Tuesday at Diamond Links Golf Course.

CATLETTSBURG Social distancing in golf is simpler than most other sports, even inadvertently, William Ferguson conceded with a grin.

"You're out there, spread out. You've got fairways that are 35, 40 yards wide, and these guys aren't usually very close to each other," Ashland's boys golf coach half-joked Tuesday before a practice round at Diamond Links Golf Course. "You've got one on one side of the fairway or in the rough, and one on the other side. Some will be in the woods. You won't have to worry about them getting up close on each other too much."

Ferguson's Tomcats and other golf teams around the commonwealth can indeed focus on straightening their drives and sharpening their putts. Golf is the lone KHSAA-sanctioned sport that is proceeding as scheduled.

Every other fall sport can begin mandatory practice no earlier than Aug. 3, the KHSAA Board of Control voted on Friday, and that carries with it the potential for a postponement to begin the regular season. But golf got going in earnest on Wednesday and competition can begin July 31.

If Rowan County's lidlifter proceeds as scheduled, it and other golf events that day will be the first KHSAA interscholastic competition since the girls basketball state tournament was halted due to the COVID-19 pandemic on the second day of its first round on March 12.

Larry Slone, who doubles as Rowan County's softball coach and saw that entire season wiped out in the spring, is excited to see the Vikings hit the links again.

"I love competing, and I love to see the kids get stronger and better," Slone said. "When you don't get to compete, they don't progress, they lose years, and time gets everybody. So when you lose a lot of this time, it's valuable time lost."

Ferguson said it wasn't always clear that the Tomcats' event would go off as scheduled because of its early spot on the season calendar.

"There for a while, I was a little apprehensive on whether or not we were gonna be able to get the opportunity to do it, because so much was changing," Ferguson said. "I didn't have all the responses that I was expecting because everybody was just kinda holding their breath and waiting to see, are we even gonna be able to come out and play?"

The KHSAA's go-ahead has since provided some reassurance.

Slone plans to tweak some of the procedures of Rowan County's tournaments on July 31 and Sept. 5.

Players and coaches typically congregate near the scoreboard as players come off the course, a two- or three-player group at a time, their rounds complete. That would clash with social distancing guidance from the Centers for Disease Control and Prevention (CDC), Slone knows, and he said he will have either coaches or volunteers collect scorecards to reduce the bottleneck of humanity.

"Other than that," Slone said, "I think it is one of the sports that has a great opportunity to finish the year, simply because we are outside. We can monitor the groupings by putting them together and then ask them to follow the directions and guidelines that we set forth."

Ferguson said preparation and flexibility will be important this fall, knowing that even as golf is on schedule, that could change easily.

"You never know, we may show up the next practice and somebody has a fever, and we're done for a while," Ferguson said, moments after using a temporal thermometer to check each incoming Tomcat. "It's just one of those things, you don't know what's coming next. You just have to anticipate and make a plan, and then be ready to change it at the drop of a hat."

Ferguson was Boyd County's boys soccer coach from 2010-14, so he understands whatever frustration other fall sports participants might feel at being delayed at least two and a half weeks, but is pleased to press forward with his current sport.

"I mean, golf courses have been open during this whole thing. I probably would've logged 100 rounds," Ferguson said. "Maybe we'll actually start to develop a following now, where we're the only game in town. That'd be awesome, to get some people excited about golf."