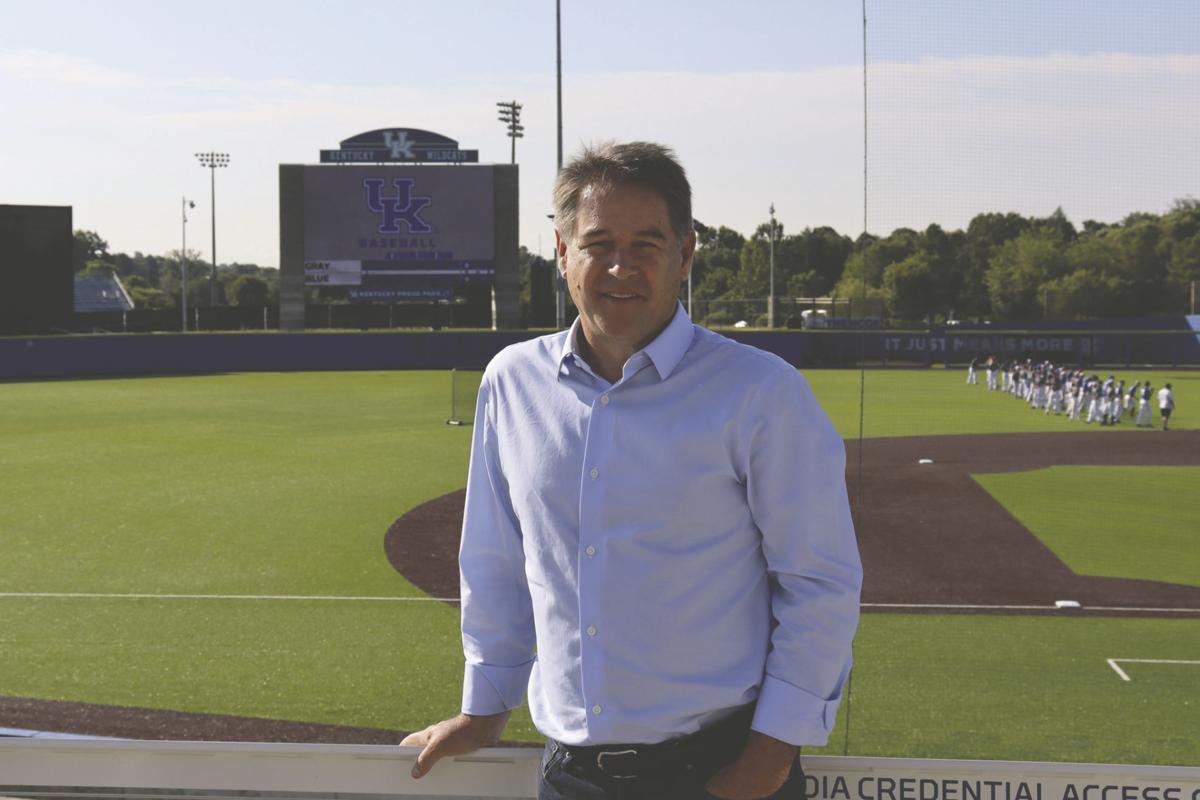 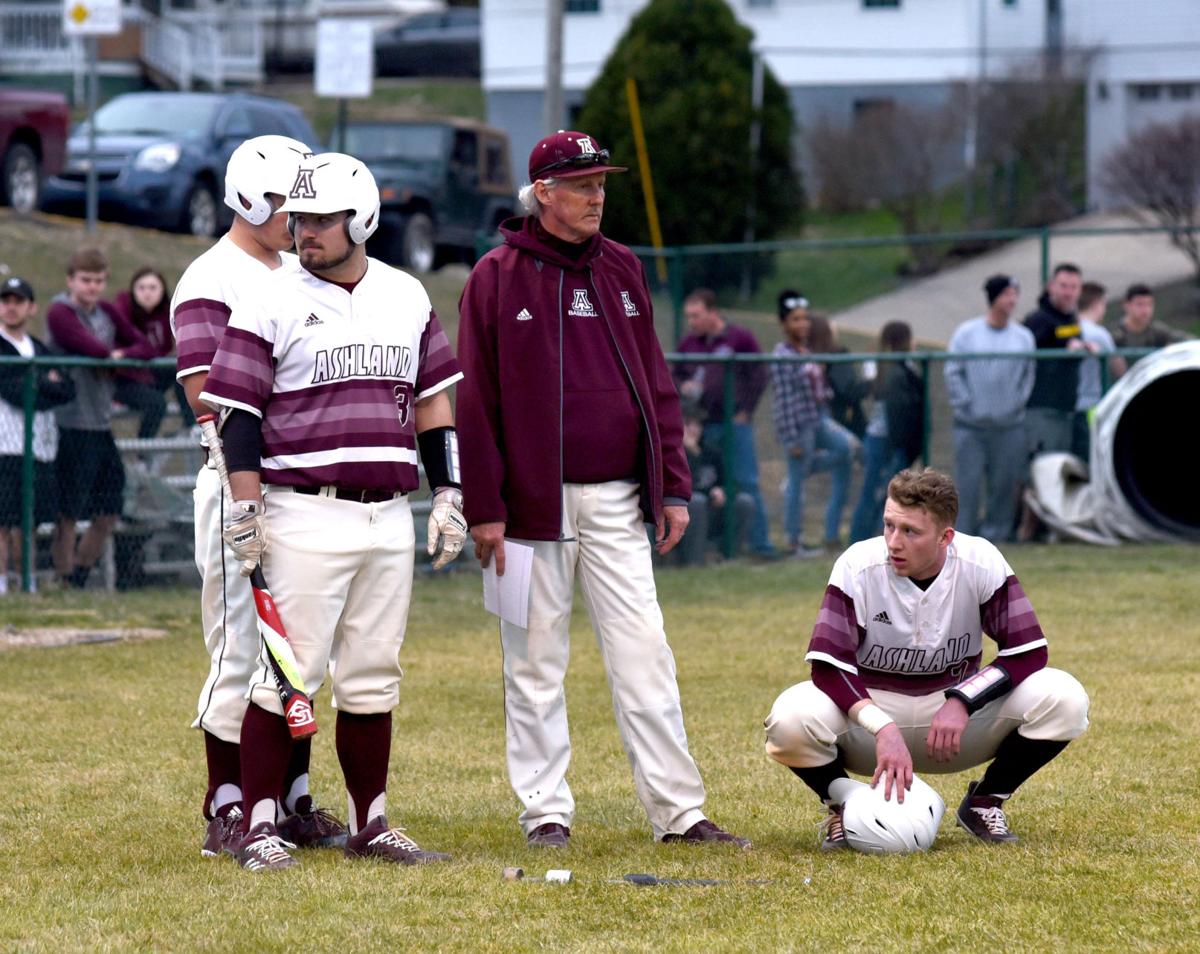 Ashland coach Johnnie LeMaster, along with some of his players, wait during a West Carter pitching change. Don McReynolds | For The Daily Independent

Ashland coach Johnnie LeMaster, along with some of his players, wait during a West Carter pitching change. Don McReynolds | For The Daily Independent

The irony of that timing is not lost on Archey, whose career in sports business included heading MLB’s international division from 1999-2014.

“My career path coincided with and really was assisted by the first Japanese player coming over, Hideo Nomo,” Archey said Tuesday, “and that’s really what led to the explosion in the value of international rights. The expansion of the business was when Nomo came over. It brought about a whole new era in international baseball.”

So Archey became the senior vice president of international business for MLB, and because of that, his likeness will be added to the famed Portsmouth baseball floodwall mural later this year, said Bill Warnock, a member of the baseball committee of Portsmouth Murals, Inc., and the emcee of tonight’s banquet.

He didn’t get there the same way as Johnnie LeMaster — who will also be honored tonight and with a mural berth — nor the likes of Al Oliver, Branch Rickey, Don Gullett, Greg Gibson and Gene Bennett.

In fact, a 10-year-old Archey wouldn’t have anticipated such an honor at all.

“I wouldn’t have believed it, nor would my friends have believed it,” Archey said, laughing. “What I did, I never aspired to do that, just because I didn’t even know it was possible. Growing up, it really wasn’t possible. There was no position at Major League Baseball at that time that did this.

“The sport grew, the industry grew, and I was fortunate enough to be there at a time when I was able to be a part of that expansion.”

The World Baseball Classic was created under Archey’s leadership, which is to be played for the fifth time in 2021. It was a boon to the growth of the game internationally, Archey said.

“Literally, we drew over 800,000 people in Year 1 (in 2006),” Archey said. “It was profitable; we set record television ratings in many countries; it was just a phenomenal experience and event. I knew it was only gonna get better.

The Reds became the last MLB team to sign a player from Japan this offseason, but that doesn’t mean they’ve ignored international pipelines, Archey noted.

“To see the Reds just now getting into that with Japanese players is kind of interesting,” Archey said. “On the other hand, the Reds were one of the first and most aggressive organizations in Latin America, in scouting and development and bringing players over from Latin America. They were on the front end of that expansion.”

Now that diversity is commonplace. Of the 750 players on Opening Day MLB rosters in 2019, 194 hailed from Latin America, as well as six from Japan and six from South Korea, according to UPI.

Those bonds remain strong, Archey said, despite geopolitical issues making it difficult to find players in some areas.

Cuban players cannot come to the United States without defecting from their country after President Donald Trump’s administration rescinded a Barack Obama-era deal, on the grounds that it violated the U.S.-Cuba trade embargo in place for more than 60 years.

And MLB teams have shut down their academies in Venezuela and don’t send scouts there due to economic and political issues, and MLB forbade players from participating in the Venezuelan Professional Baseball League this winter due to an embargo against the Venezuelan government.

“I think baseball has been a great equalizer and brought people together,” Archey said, “and I was fortunate to play a part in using baseball to build relationships with Cuba, with the World Baseball Classic and playing games in Cuba. Baseball was a tool in helping the relationship, so I think it’ll continue to be.

“Baseball’s done such a great job and continues to do such a great job of expanding the game at the grassroots level and investing in it, and with the accessibility of, now, television and digital, those are challenges that they’re gonna overcome.”

LeMaster made his baseball name by more traditional means. Born in Portsmouth, he was a shortstop for the Giants, Indians, Pirates and Athletics, spending 12 seasons in the major leagues.

LeMaster, 65, called the news “to say the least, a huge honor” on Tuesday.

“A lot of guys don’t get things done like this for them until they’re dead,” he said. “It’s just something that while you’re still living that you can really appreciate.”

LeMaster shares a kinship with the other players from the area, including those immortalized on the floodwall mural.

“I know all those guys that are on there; well, I knew most of them,” LeMaster said. “We’ve always kind of hung around together whenever we knew we were in the area, stay in contact with each other. If somebody needs to do a baseball clinic, they call you, and you go and help them, and it’s been the same way with me. Any time I’ve called any of them, they’ve come to help immediately, just dropped whatever they were doing and come on.”

“I still throw a lot of batting practice and give some golf lessons and just enjoy them,” he said.

Famed muralist Robert Dafford will add Archey’s and LeMaster’s images to the floodwall mural later this year, Warnock said. The project is running behind because Dafford, who lives in Lafayette, Louisiana, fell off scaffolding and broke his leg, Warnock said. He hasn’t yet added Wheelersburg’s Little League Softball World Series 2018 champions, who were to go up in 2019.

“Any time he’s gonna be there, it’s gonna be a huge crowd,” LeMaster said. “He’s got story after story that he can tell, and I love hanging around him. It’s gonna be a great atmosphere.”

The event begins at 6 p.m. with a social hour, followed by dinner at 7.