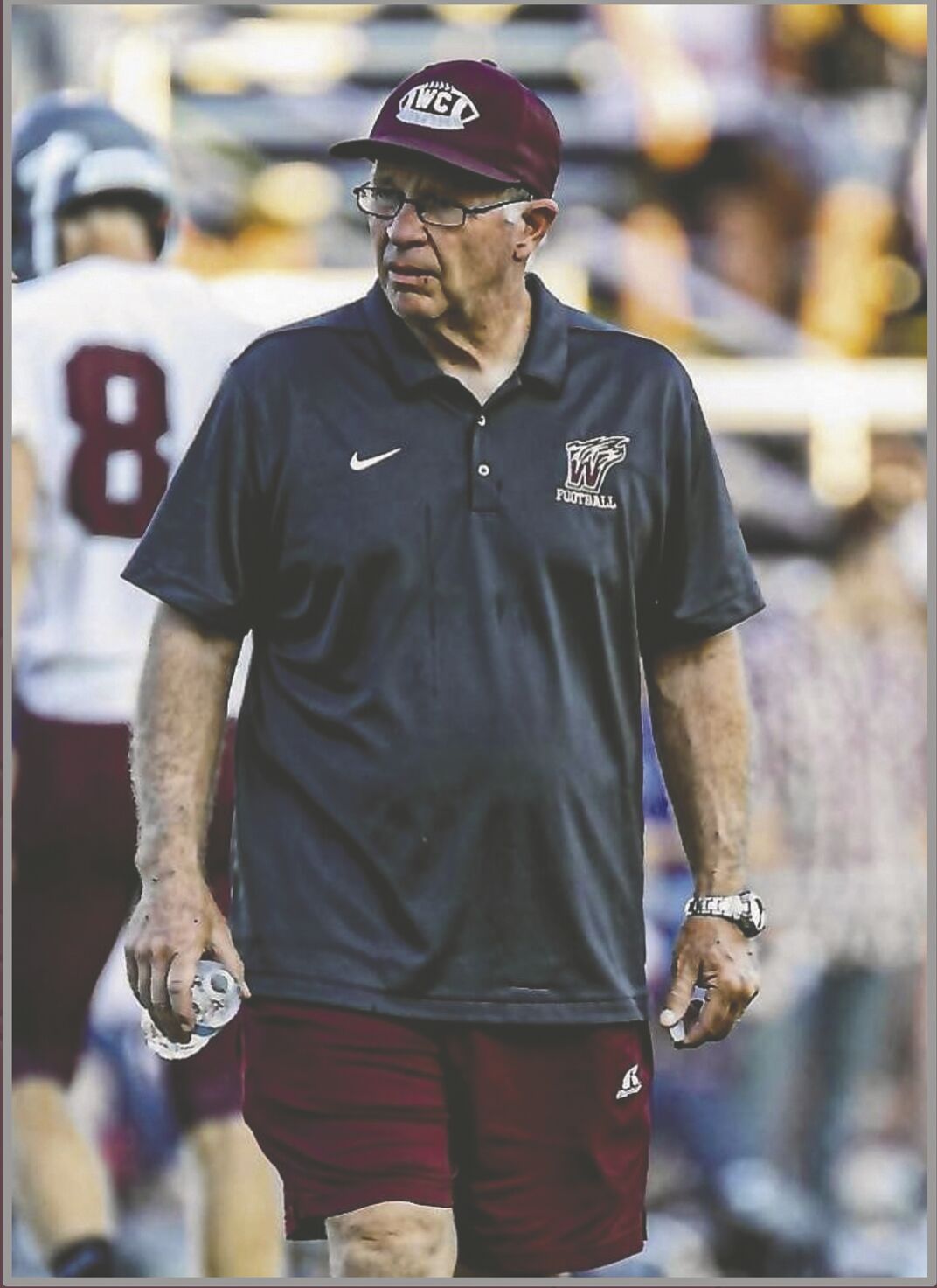 Mike Flannery looks on at a past West Carter football game. The veteran coach recalls important and colorful moments in Comets athletic history in his new book, “Once a Comet, Always a Comet.” 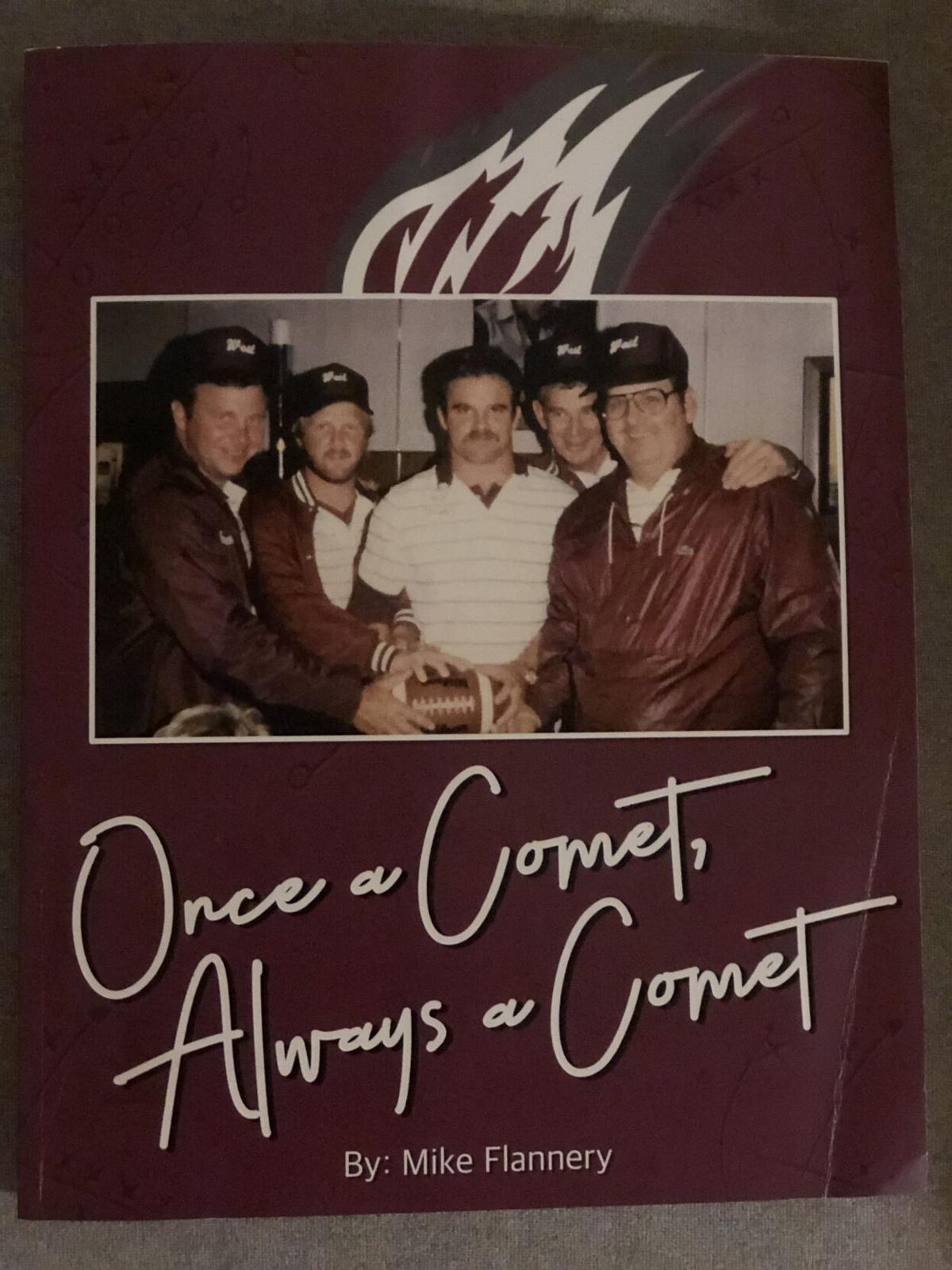 The front cover of Mike Flannery’s new book. It was released in May.

Mike Flannery looks on at a past West Carter football game. The veteran coach recalls important and colorful moments in Comets athletic history in his new book, “Once a Comet, Always a Comet.”

The front cover of Mike Flannery’s new book. It was released in May.

It’s possible only one person has the institutional knowledge and connections to write and compile a book including the following: West Carter boys basketball coach Grady Lowe was assessed a technical foul in the 1992-93 season because a fan threw a hot dog on the court; Hugh Johnson improbably won a dual track and field meet for the Comets against East Carter in the 1980s by winning the 800, which he had never run before, and collapsed afterward and had to be helped off the track ... AND West Carter’s football team, lost en route to a game at Sheldon Clark in the 1980s, encountered an old wooden bridge, and the late bus driver Ralph Asher made every player, coach, manager and cheerleader get off the bus and walk across the structure before he attempted to cross it in the yellow dog. (Spoiler alert — he succeeded.)

It is, however, certain only one person can take readers inside the vehicle on John “Hop” Brown’s ride to his first day of work for the Carter County Board of Education in 1978, some 22 years before his Lady Comets won the state girls basketball title — because it was also that person’s first day, and he accompanied Brown to teacher training.

“We talked about the same thing that all teachers talk about while going to any in-service,” Mike Flannery wrote, “where will we eat lunch and how long will this damn meeting last?”

Flannery worked at West Carter long enough to both have been Brown’s rookie peer and also to coordinate the football Comets’ special teams in a state semifinal near-miss against Beechwood last fall.

Flannery combined a treasure trove of information — both researched and personally lived in a lifetime as a West Carter player, student and coach — with a distinctive storytelling style to form “Once a Comet, Always a Comet.”

The book, released in May, combines often-hilarious and obscure anecdotes, told from the perspective of Flannery and other West Carter sporting figures who experienced them, with records and photos dating back to the school’s first athletic teams in 1971.

“Some satisfaction I’ve had with it is I’ve had people that’s looked at the book and read the book, and they tell me, ‘I really didn’t know that,’” Flannery said. “That’s people that’s kept up with some sports around here pretty seriously. That was kinda my goal ... everybody Googles everything now, and that book’s full of stuff that you can’t Google.”

It was coincidental, Flannery said, that the book came out on the 50th anniversary of West Carter’s opening. Flannery didn’t even necessarily set out to write a book either, he said. He’s on the committee to recommend inductees for a Comets Hall of Fame in the works, and he took that responsibility seriously enough to do some digging.

“I got to thinking, if I’m gonna do that, I need to do a little research,” Flannery said. “I didn’t want to nominate somebody for that just because I knew them.

Flannery said the process took about two years and cracked he “just about aggravated everybody to death, my family and everybody trying to help me do stuff.”

Even if that’s true, the result was worth it to the West Carter community, said at least one fellow Comet.

“Coach Flannery put together a thorough history of the first 50 years of athletics at West Carter High School,” West Carter football coach and assistant principal Daniel Barker said. “Every sports team is included. He worked on the book for years, and I’m glad he was able to put together such a great product.

“For such a small school, West Carter has a rich athletic history, and this book really highlights that. The stories about different contributors to the various programs are hilarious, and definitely a tribute to all the time and effort those men and women have put in.”

Barker is published in the book as well. Flannery asked Barker to contribute his take on West Carter’s dramatic victory over Russell last fall, the Comets’ first-ever in the series, and a timeline of the 2020 season that ended one point shy of forcing overtime against Beechwood in Olive Hill, with a berth in the state final on the line.

“It’s pretty neat to be in a book,” Barker said. “Being a big fan of the original ‘The Comet’s Tale’ by Jack Fultz, contributing to essentially the sequel to that book was a really cool experience.”

Flannery, 65, played on West Carter’s first football team and coached until last season. Barker still hopes to talk him out of it, but as of early July Flannery had planned to retire from coaching.

“Daniel’s gonna let me hang around out there,” Flannery said. “He’ll tell a different story, like, ‘Well, we need you,’ and all this stuff, but those boys, they’re in good shape. I’ll always help them out in different ways.”

Flannery estimated in early July that “somewhere around 40 to 45” books remain of the 250 or so printed on the first run. They can be found at James Do it Best Hardware in Olive Hill or on Facebook by contacting Veronica Flannery, Noreen Flannery or Patty Bond, Flannery said.

The book costs $25. Shipping is $5 for anyone who wants one mailed.

Flannery sought to make West Carter sports history more accessible to its fan base and believes “Once a Comet, Always a Comet” accomplishes that.

“It’s a nice thing for a community, I believe, to be able to look at it,” he said. “It gives them a little ownership of it.”