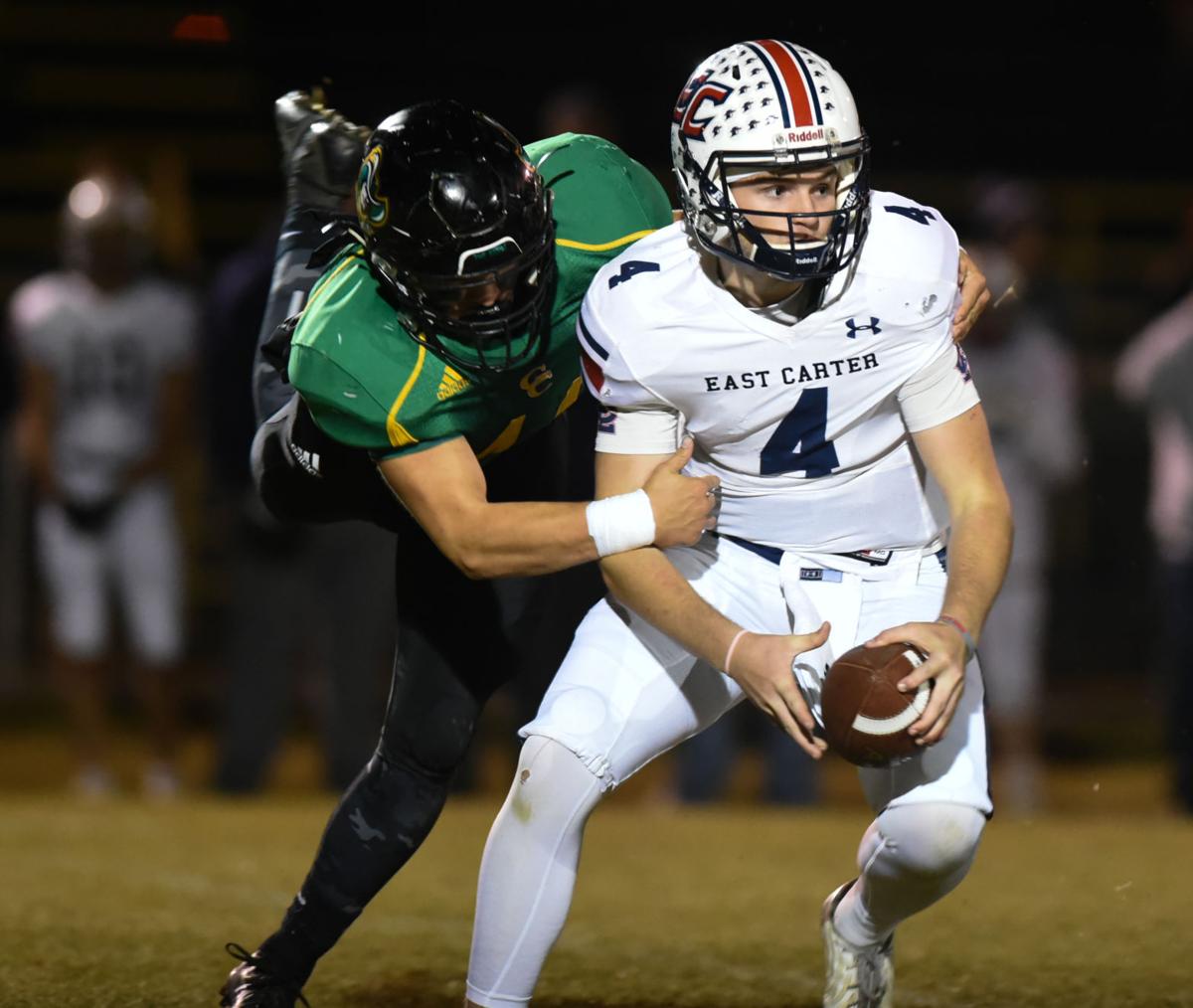 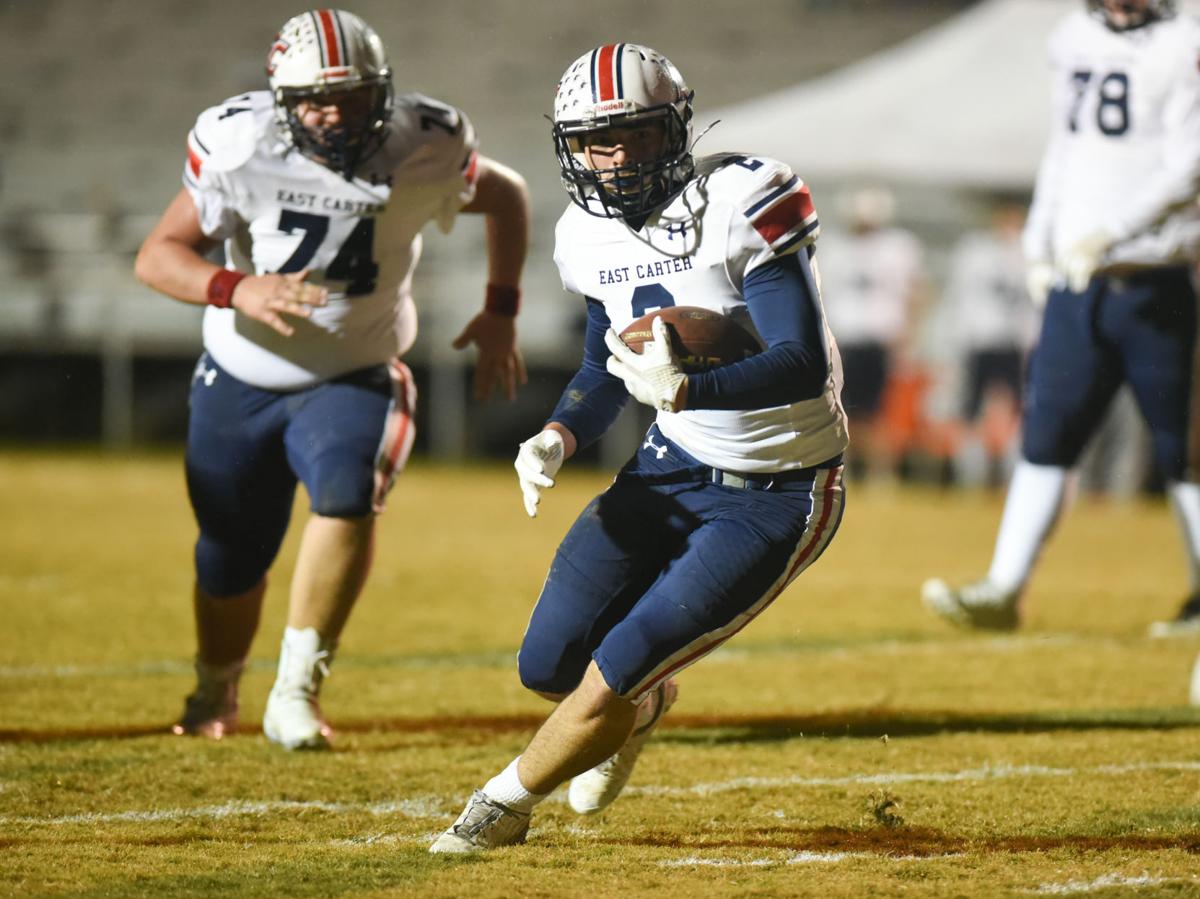 The Raiders are all following Champlin’s lead, which has led to seven victories — their most since 2005 — entering tonight’s playoff opener at Russell.

That took some getting used to for Champlin, under whom the Raiders rushed more than five times as often as they passed in his first season in Grayson in 2015 — 60 throws, 319 runs.

“I’m a run-first guy, and my roots come from option football,” Champlin said. “I’m an old I(-formation) option guy, and like to read somebody (on the opposing defense).”

East Carter still does that, but the Raiders figured out their strength is in their collective ability on the edge and their trust in Hicks, as opposed to downhill running between the tackles. So they use run-pass options instead of the triple option.

“We run the RPO a lot, and I like it because it makes the (opposing) defense wrong,” Hicks said. “If they’re gonna come at the running back, then I’m gonna pull it and throw it, or I’m gonna run it. And if they sit back, we’re gonna leave it (with the back) and we’re gonna pick up three, five yards. I think it really makes our offense very versatile.”

That has convinced Champlin and offensive coordinator Aaron Baldwin to loosen the play-calling purse strings. The Raiders have put the ball in the air 205 times this season for 1,869 yards and rushed 276 times for 1,480 yards.

“For coach Champ to really trust me to throw the ball, it just gives me a confidence boost,” Hicks said. “East Carter’s always been the team that runs up the middle for 2 yards, and for us to throw the ball down the field and for Micah to go up and catch the ball, I think it’s that Champ trusts us and trusts what we’re doing.”

Hicks, a third-year starter, is believed to be the Raiders’ all-time leading passer, with 3,270 yards and 35 touchdowns.

“Sometimes I’ll throw the ball, and Micah will just go get it and be Micah,” Hicks said. “I say it all the time, that he’s a bad man and he makes me look good.”

Adams has made a handful of sensational receptions to beat double coverage, Champlin said, “just wild, acrobatic catches,” but drawing two defenders also allows the Raiders to get other skilled pass-catchers involved.

“We’ve got six, seven, eight guys that we trust to get the ball to,” Adams said.

The offensive line, from left to right, of Jacob Carter, Clay Morris, Mikey Holbrook, Tyruss Adams and Jarrod Conley pave the way, and Baldwin — the Raiders’ head coach from 2007-10 — directs it all.

“He’s the head coach of the offense,” Champlin said. “He makes all the decisions on offense, and I think he really enjoys his role there in being able to sit back and call plays and manage that aspect of it. He brings a lot of expertise to the table in the fact that he’s been in my shoes before, so when hard decisions have to be made, he understands both sides of it.”

“It’s nice to just be able to flip over the the headset, say, ‘Hey, I’d like to see this,’ flip back, and they make it happen,” Champlin said. “Those guys do a really good job of getting people a lot of touches. We’re maybe not as balanced run-pass as we’d like to be, but we feel like we’re very balanced in touches.”

East Carter takes that approach to Russell tonight in a first-round postseason rematch. The Raiders lost to the Red Devils, 31-7, two weeks ago, but they scored first and consider that effort marked progress.

“Our kids are confident in themselves and what we’ve done this year,” Champlin said. “Our coaches are confident, and everybody believes in each other. That’s a great way to go into the playoffs, rather than being 4-6, 3-7.

“You feel like you’ve got some confidence, and the last time you played this team, you played them tough for a little while and in spurts. You try to find ways to build off of that and try to capitalize on some of those things and give yourselves a chance in the fourth quarter.”