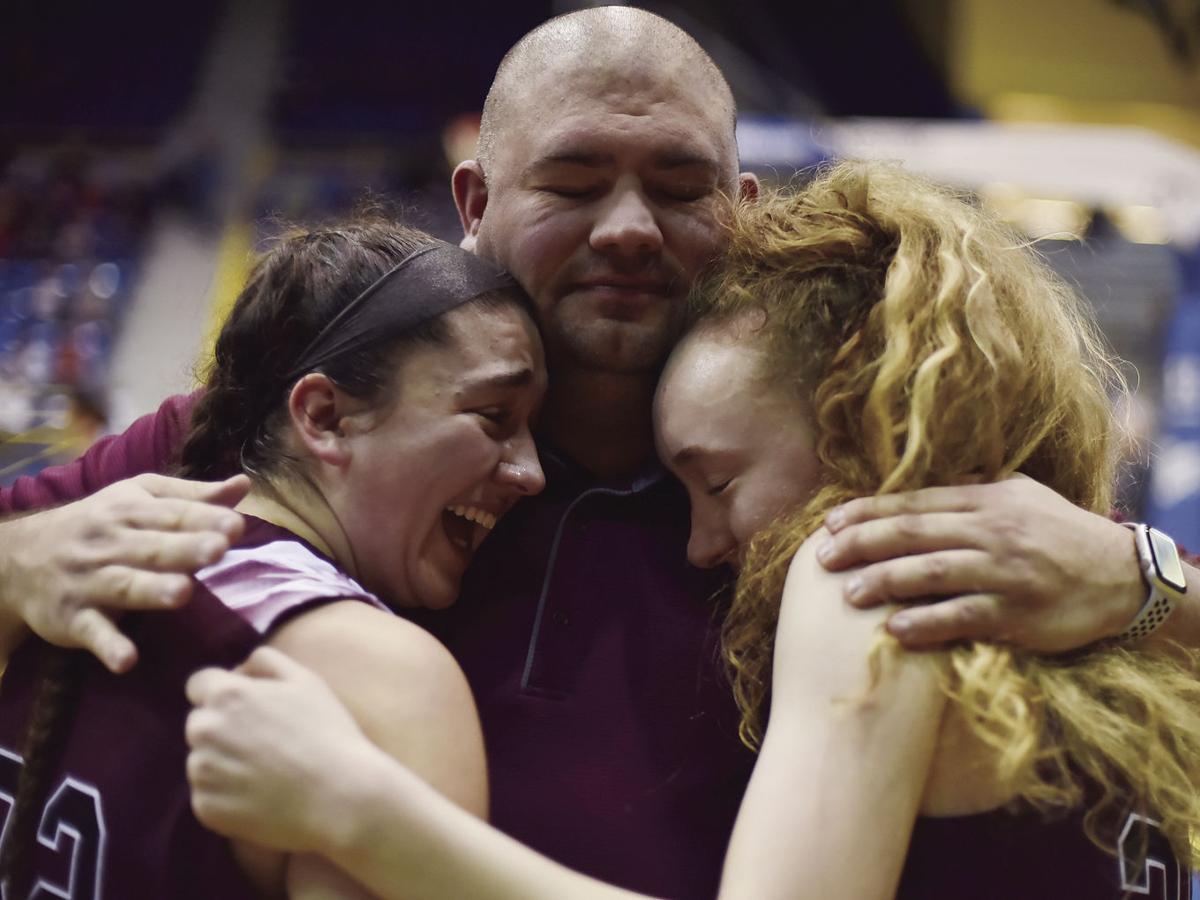 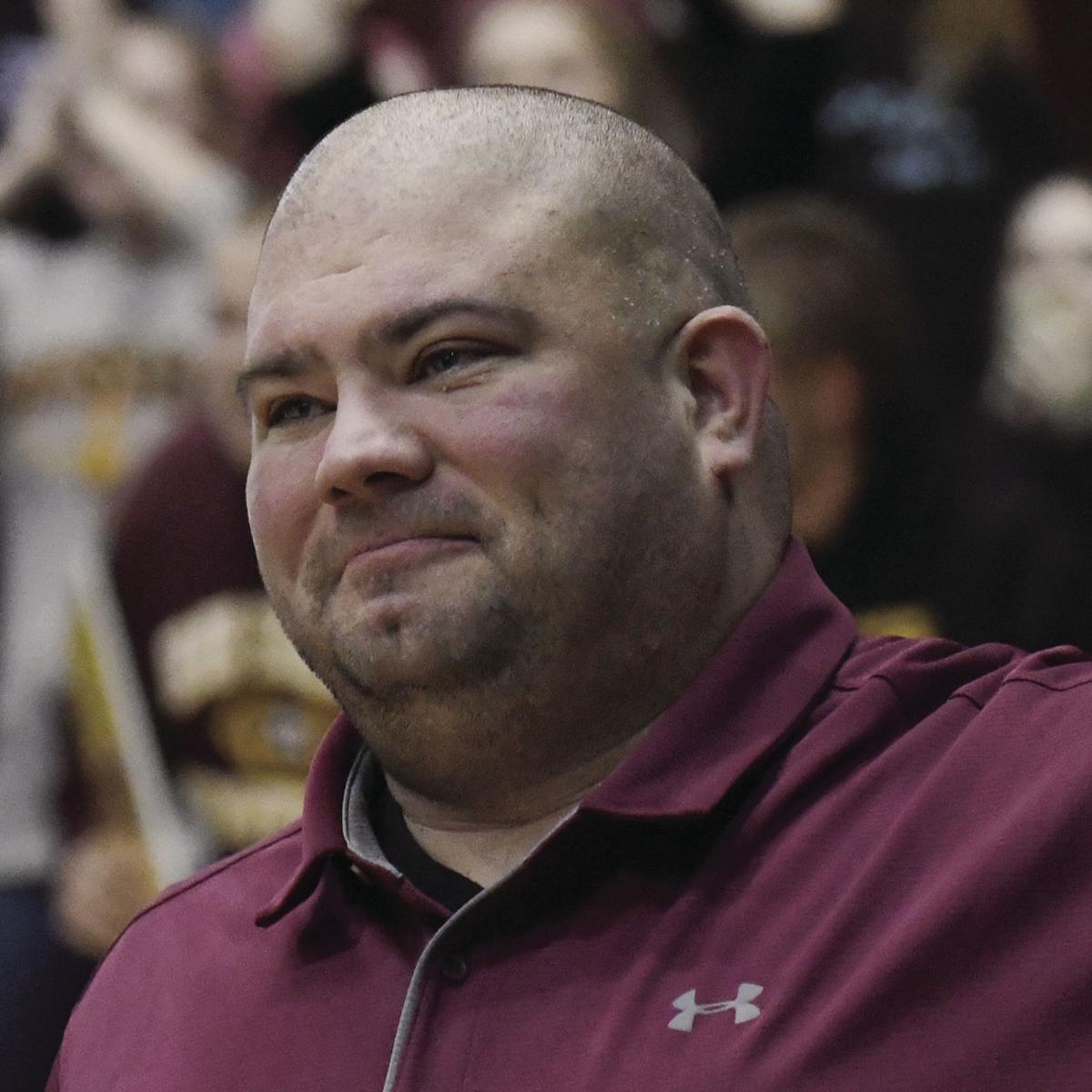 MOREHEAD When Kobe Bryant and his daughter, Gianna, died after a helicopter accident on Jan. 26, the hashtag #girldad went viral.

Bryan Hall is a #girldad to both Avery and Taylor, a second-grader and kindergartener, respectively, at Russell Primary, but he’s become like a dad to a roster of Lady Devils, too.

“He just cares about us like we’re his own,” said Kaeli Ross, a junior who earned 16th Region Tournament Most Valuable Player honors on Saturday.

Hall’s eyes moistened as he shared hugs with players during the waning moments of Russell’s 75-57 region championship victory at Ellis T. Johnson Arena.

“You get to see where these girls have come from,” Hall said, “and going back to last summer, the hours they’ve put in. With this crew, they’ve worked so hard. They fought so much. We’ve had injuries, illnesses, and I’m just about in tears for them. I don’t know what else to say.”

Hall is in his second year of assisting coach Mandy Layne. He thought his coaching days were over until he went to sign Avery up for Marvin Meredith Basketball League in 2018.

“We were friends in high school,” said Hall of Layne, who as Mandy Sterling had an illustrious career at both Ashland and West Carter — she helped lead the Lady Comets to a state title in 2000. “She found out my kids were in the school system, so we started talking, texting back and forth. … I’ve told myself over and over again I was done coaching, but somebody brings you back. When Mandy asked for help — I always thought the world of her — I did it.”

“We need a good cop,” she said. “I’m usually the bad cop, so it works out really well in those instances. … He pulls them to the side and encourages them, and it’s just so important because the girls really love and respect him.”

Hall stood near the bench early in the fourth quarter, wrapped his arm around Aubrey Hill and gave the junior a brief pep talk. Hill was excellent on Saturday, collecting 15 points, 14 rebounds and six blocks.

She’s one of many Lady Devils who’ve drawn close to Hall.

“I’ve told her she’s the most interesting kid I’ve ever coached,” Hall said. “She plays musical instruments, takes AP classes and she’s just a down-to-earth kid who understands where basketball is in life. It’s important, but it’s not the end of the world. She’s mature beyond her years.”

Russell is on top of the 16th Region girls basketball world — and it’s going to Rupp Arena. Hall’s been there — twice — as a player for Boyd County in the 1990s.

Former teammate Brian Biggs was across the floor cheering on his daughter, eighth-grade standout Audrey, and the Lady Lions from the first row on Saturday.

Hall’s wife, Ashley, is a Russell alumna. Is it strange for Hall to coach against his alma mater?

“The (Russell) school system’s embraced me since I came over,” Hall said as Lady Devils took turns scaling the ladder with scissors in hand. “It’s hard for me to coach against Boyd County, but I came here to win and I couldn’t be happier for this crew.”

Hall has coached with Bill Bradley at Ashland (2001-04), served as a baseball coach at Eastern (Louisville) from 2007-12 and assisted former Boyd County baseball skipper Brandon Ramsey from 2013-16.

Hall said working with Layne and fellow assistants Garry Morris and Whitney Compton is a joy, but he and Layne don’t always see eye to eye.

“She and I, sometimes we clash and our personalities are different, but when it comes down to it, there’s nobody that wants it more for these kids than she does,” Hall said. “There’s nobody that puts in more time. I tell her she’s obsessed sometimes, to quit watching film.

“I told her (Friday), after the (semifinal) game, that I was going to change the password to our Hudl account where we watch film. We should know everything we need to know about Boyd County,” Hall added with a chuckle. “She’s determined. She’s a great teacher for these kids, and these kids responds to her.”

Hall is glad to be on the sideline after a few tumultuous moments off the court. He underwent a hip replacement in October. In January, he suffered a dislocated hip and had to return to the hospital for repair.

At one point in November, Hall rented a Rascal Electric Scooter with which he moseyed around Marvin Meredith Gym.

“The girls loved that, of course,” he said with a smile.

Layne enjoys having Hall on the bench.

“It’s fun. He always gives good advice and he’s super helpful,” Layne said. “He’s really good with the girls, and we’re excited to have him.”

Russell’s Shaelyn Steele wrapped up her three-game tournament performance with 56 total points. Boyd County’s Audrey Biggs had 51. That accounts for the third- and fourth-most of any eighth-grader in the 16th Region Tournament behind Kasi Mullins (75 for East Carter in 2001) and Regina Carroll (64 for Russell in 1975).

Fraley surpassed John “Hop” Brown by appearing on the sideline for the 11th time in a region championship game.

The 24th-year leader of the Lady Lions has coached 53 region tournament games.

Fraley and Brown are tied atop the list tallying most years coached in a region tournament (23).