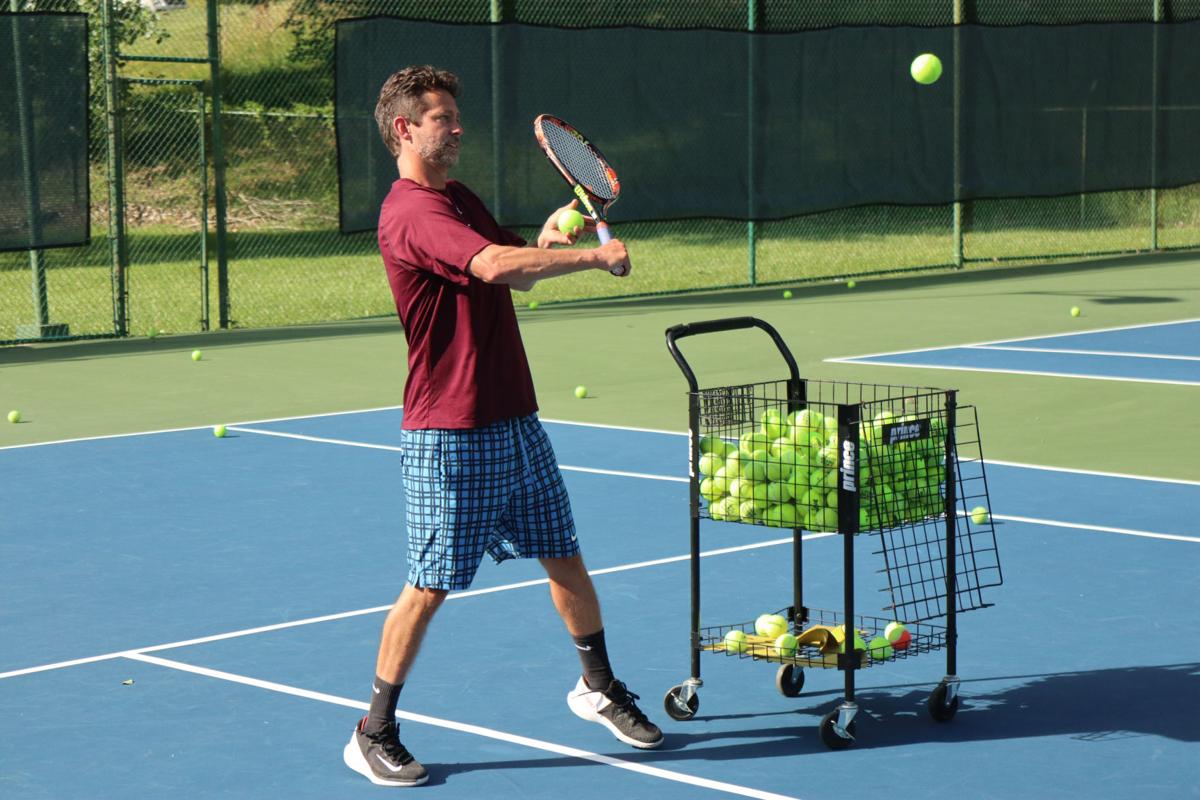 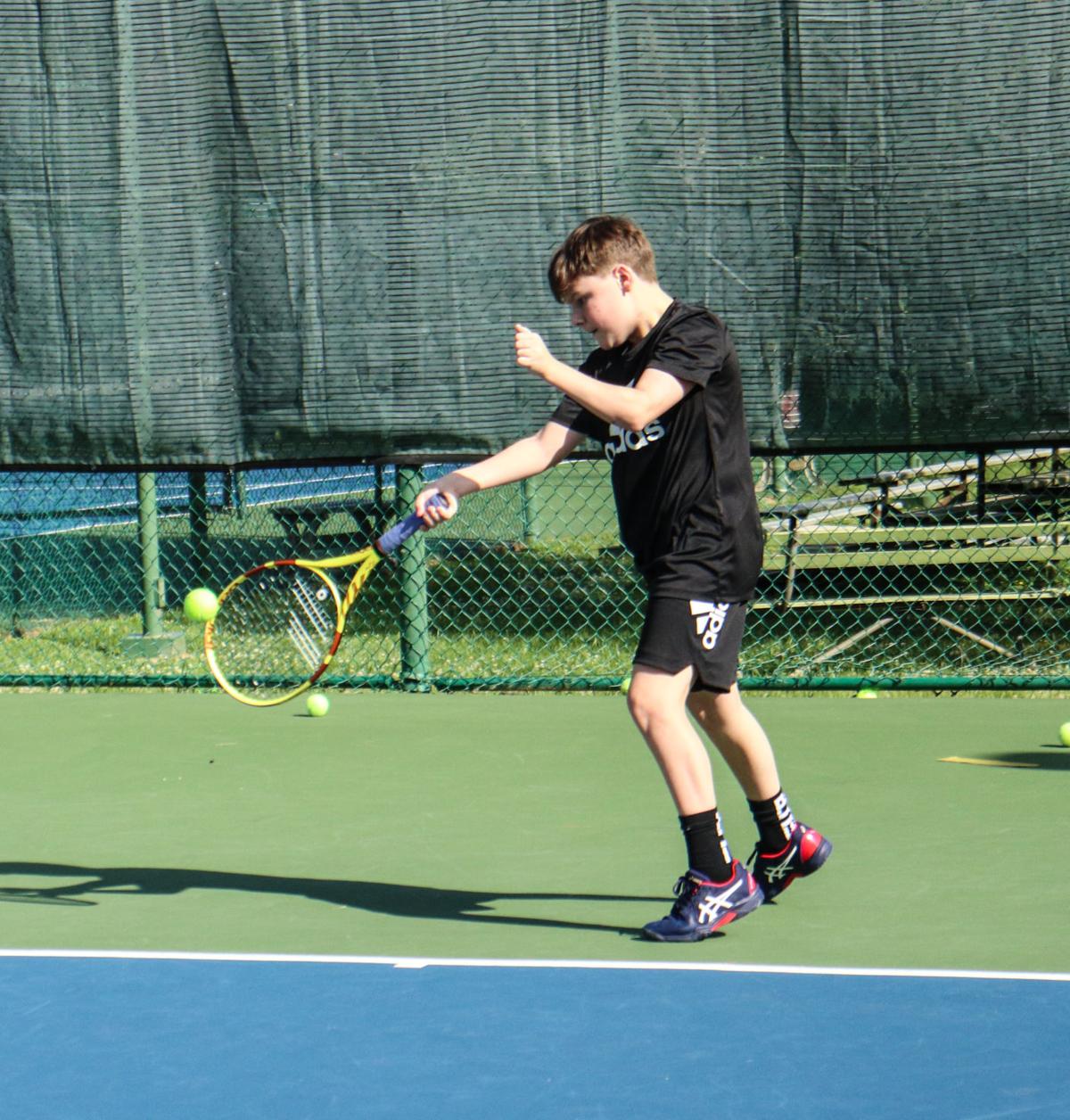 Ryder Riggs, 14, returns a service during a practice at the Ashland Tennis Center on Thursday night. Riggs competes on the Ashland varsity tennis team.

Ryder Riggs, 14, returns a service during a practice at the Ashland Tennis Center on Thursday night. Riggs competes on the Ashland varsity tennis team.

Scott Campbell is having senior moments.

And Alan Osuch is looking for in-person road races beginning in September.

You don't have to be a Michael Phelps-level swimmer, Serena Williams-rated tennis player or Boston Marathon finisher, but athletes from Ashland to Lloyd to Olive Hill are likely overjoyed that indoor and outdoor facilities — shuttered from mid-March to June 1 because of the COVID-19 pandemic — have been open for nearly a month. They're hopeful traditional 5-kilometer and longer races could resume by September.

“If nothing changes with the pandemic, we're at Labor Day weekend,” says Osuch, who organizes charity races via his O Such Tri-state Race Planners Facebook page.

Campbell is the Ashland Area YMCA's executive director. He said membership was around 9,400 when Kentucky Gov. Andy Beshear shut down indoor venues, but he thinks the numbers have rebounded to around 9,200 since the June 1 reopening.

About Campbell's senior moment: it's not a pejorative word. He touts what he won't call a “senior room” — a converted meeting space near the front door where folks age 60 and older can work out.

“I've got four or five pieces of cardio equipment, a weight bench, dumbbells and a leg machine,” Campbell said. “If you're 60 and older, you can come right in, off the front door, go in there and work out and go right back out. You don't have to hit in the traffic.”

The Y was able to stock the space with equipment from Our Lady of Bellefonte Hospital, which closed April 30. At first, Campbell thought about allowing only seniors to use workout rooms for an hour or two each day.

“But I was afraid that would inconvenience so many people to (only) allow 60-plus in,” Campbell said.

Besides the mandatory deep cleaning, new flooring was installed. You could've found Campbell on hands and knees.

“I was raised by a father that taught me a lot,” Campbell says. “I'm pretty skilled with that kind of stuff.”

There are other adjustments: fitness classes limited to 10 participants; six lanes for lap swimming, but people have to reserve 45-minute sessions and start at opposing walls; requiring masks before entering the building; not allowing reciprocal visitors from other Ys; and not allowing children younger than 15.

Campbell says limiting fitness classes to a third of regular attendance — a state requirement — went smoother than expected. “I didn't want 30 people showin' up for a class and tellin' 20 of 'em they had to go home,” he said.

Campbell hopes the state's July 1 plan to reopen bars and increase limits on gatherings up to 50 people will help the balance sheet. He says it's too early to gauge the pandemic's long-term economic impact, but he's hopeful.

Summer camps in some form are still being planned. There's an extra layer of paperwork — a Kentucky State Police background check for new staff in addition to a national and Campbell's exam.

“Traffic has steadied from the first week,” Campbell said. “I was pleasantly surprised at how many did show up that first week.”

“I think people were anxious to get out and exercise again, and tennis has been classified as one of the low-risk activities for people to contract the virus,” Groce said.

What baffles Groce: classifying tennis as a COVID-19 risk in the first place.

“We were always kinda perplexed why we had been closed down because you've got a big court (each is 78 feet long, 27 feet wide for singles and 36 feet for doubles with a 21-foot distance from service line to the net), and there's plenty of space to play and not expose yourself,” Groce said. “We ask people to wear their masks when they're not playing and try to practice social distancing.”

There are two U.S. Tennis Association precautions: each player brings a can of balls, uses them when serving and picking up a ball with the racket rather than hands.

The Centers for Disease Control and Prevention wrote in May that while person-to-person contact is the primary way the virus spreads, “It may be possible that a person can get COVID-19 by touching a surface or object that has the virus on it and then touching their own mouth, nose, or possibly their eyes. This is not thought to be the main way the virus spreads, but we are still learning more about this virus.”

Groce said September to May is the center's peak earning period. No indoor tennis from mid-March through May 31 was a 20%, $20,000 hit. He said a $36,000 Small Business Administration loan helped.

“We lost March, April, May, which was a real detriment to the tennis center because we operate as a nonprofit,” Groce said. “Luckily, we were having a pretty decent year when (the pandemic) happened.

“We're still struggling, but at least we're still hangin' in there.”

Proceeds from Osuch's races after expenses go to local charities. Virtual races replaced in-person events; competitors run or walk 5Ks wherever they like over a weekend, text Osuch with the times and receive t-shirts and awards by mail.

Osuch said seven virtual events through June 21 raised about $9,000. He also conducts informal “pop-up” runs for people who want to run what would've been an official course layout. (Drinks and snacks are provided.)

There are two early September races: the Run Like a Lion 5K at 7 p.m. Sept. 3 at Coal Grove High School in Ohio; and the Greenup Lions Club Labor Day 5K is scheduled for 9 a.m. Sept. 7 at the Community Park on Walnut Street in Greenup. Osuch also hopes an impromptu run on Sept. 5 works out, though an exact course has not been mapped.

The goal, however, is clear.