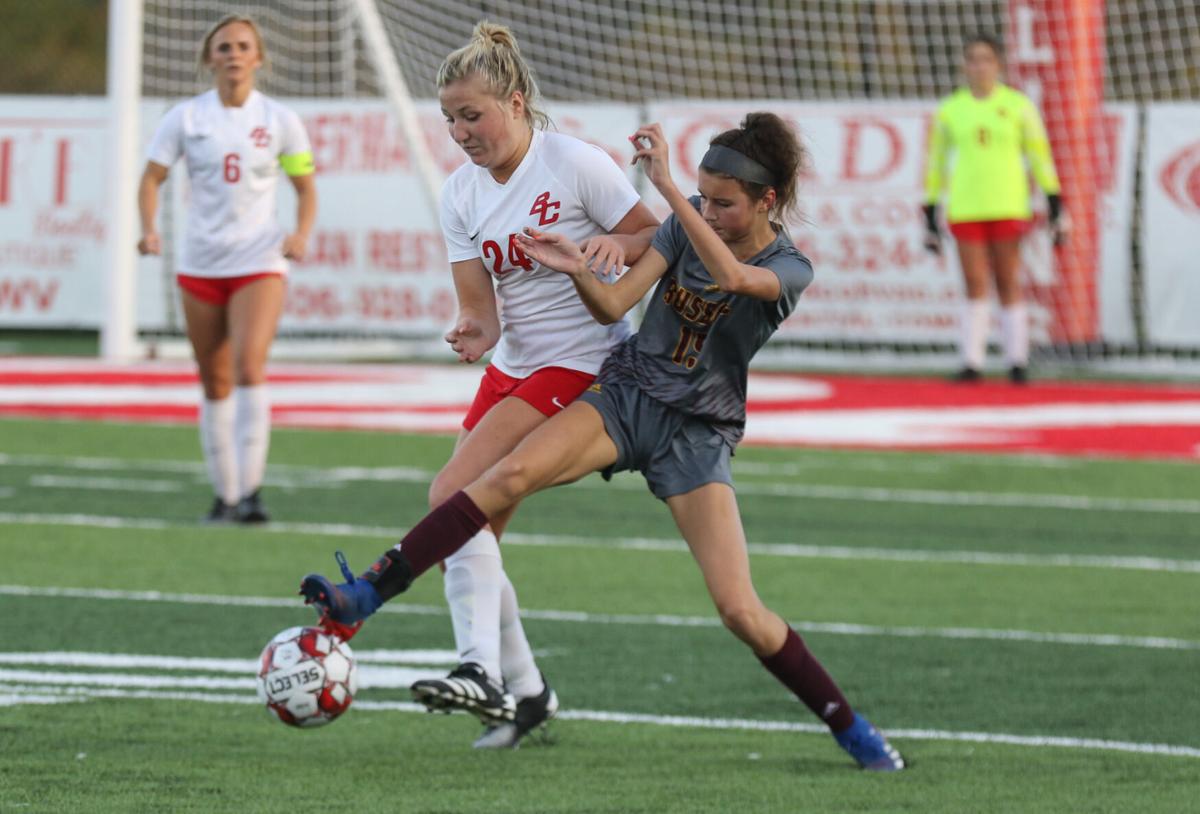 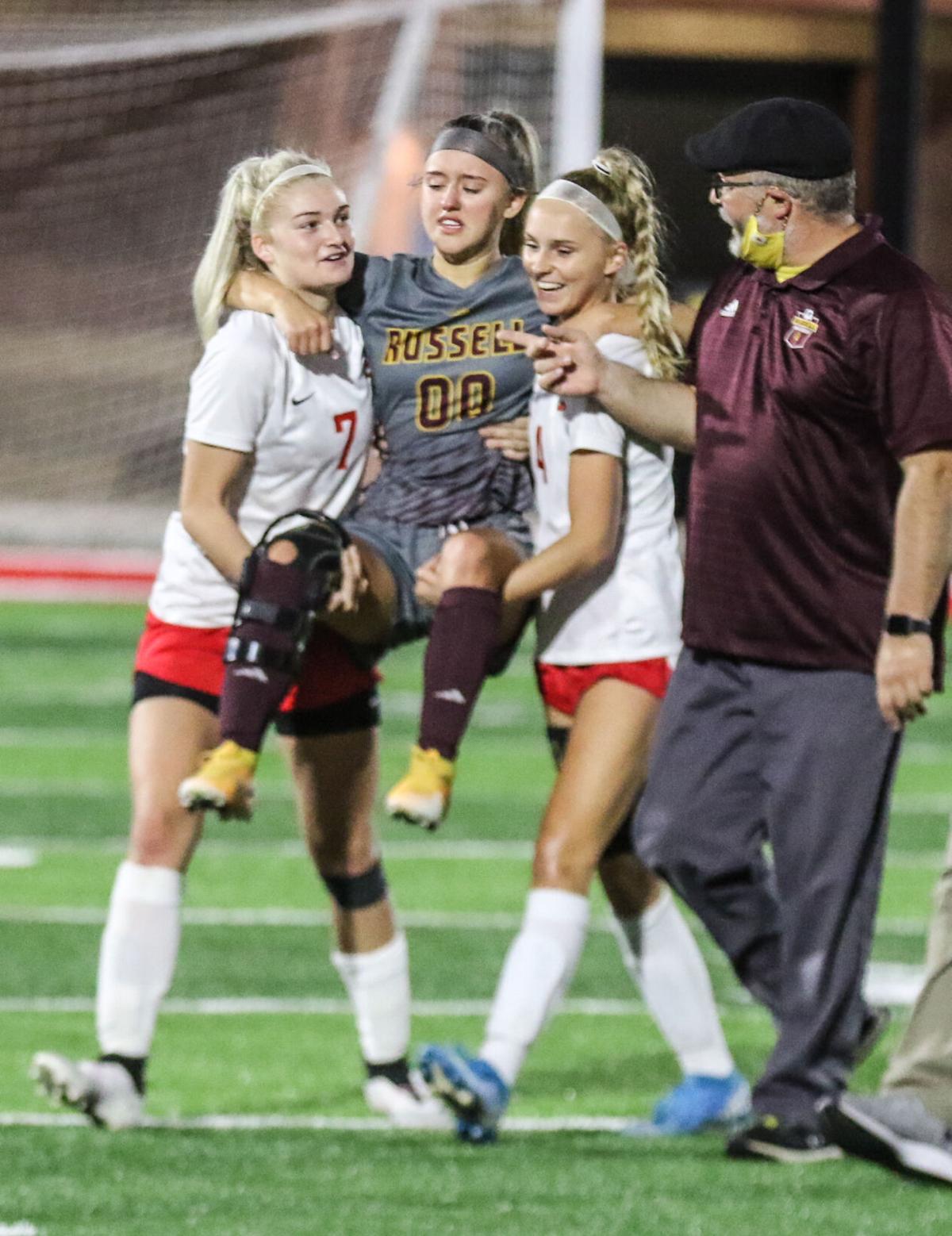 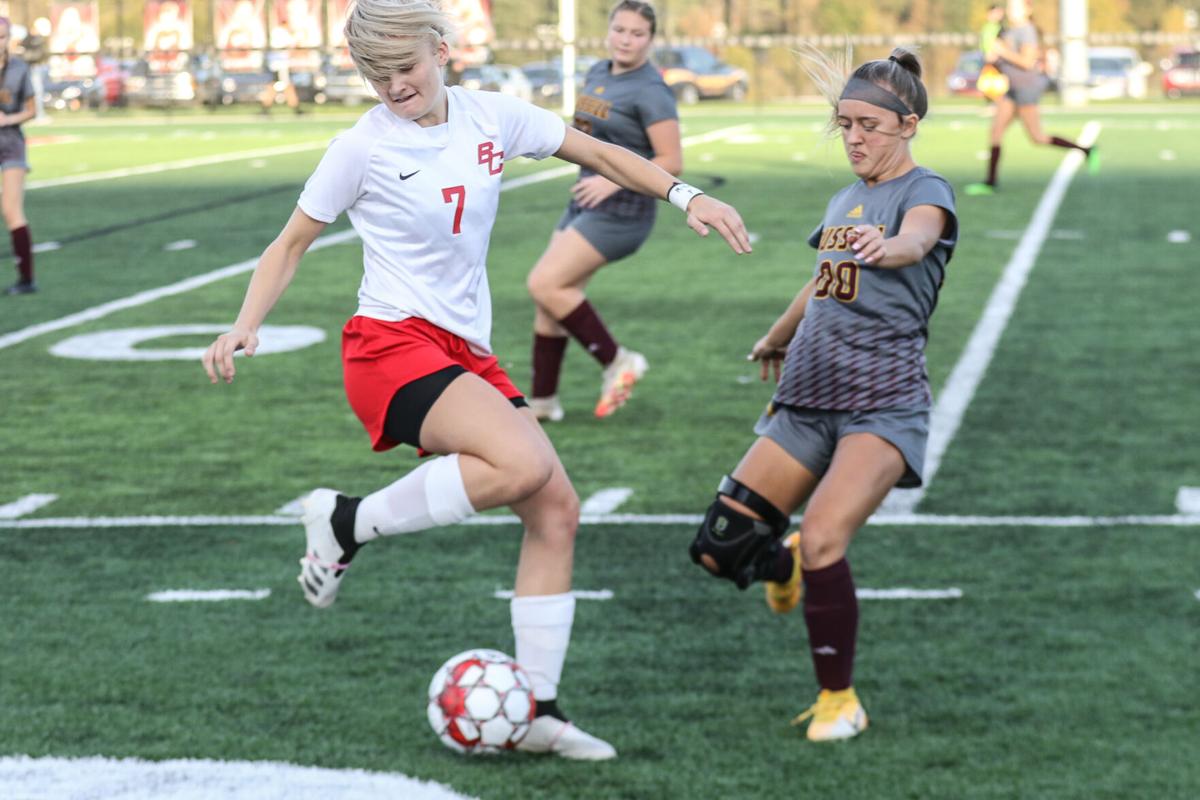 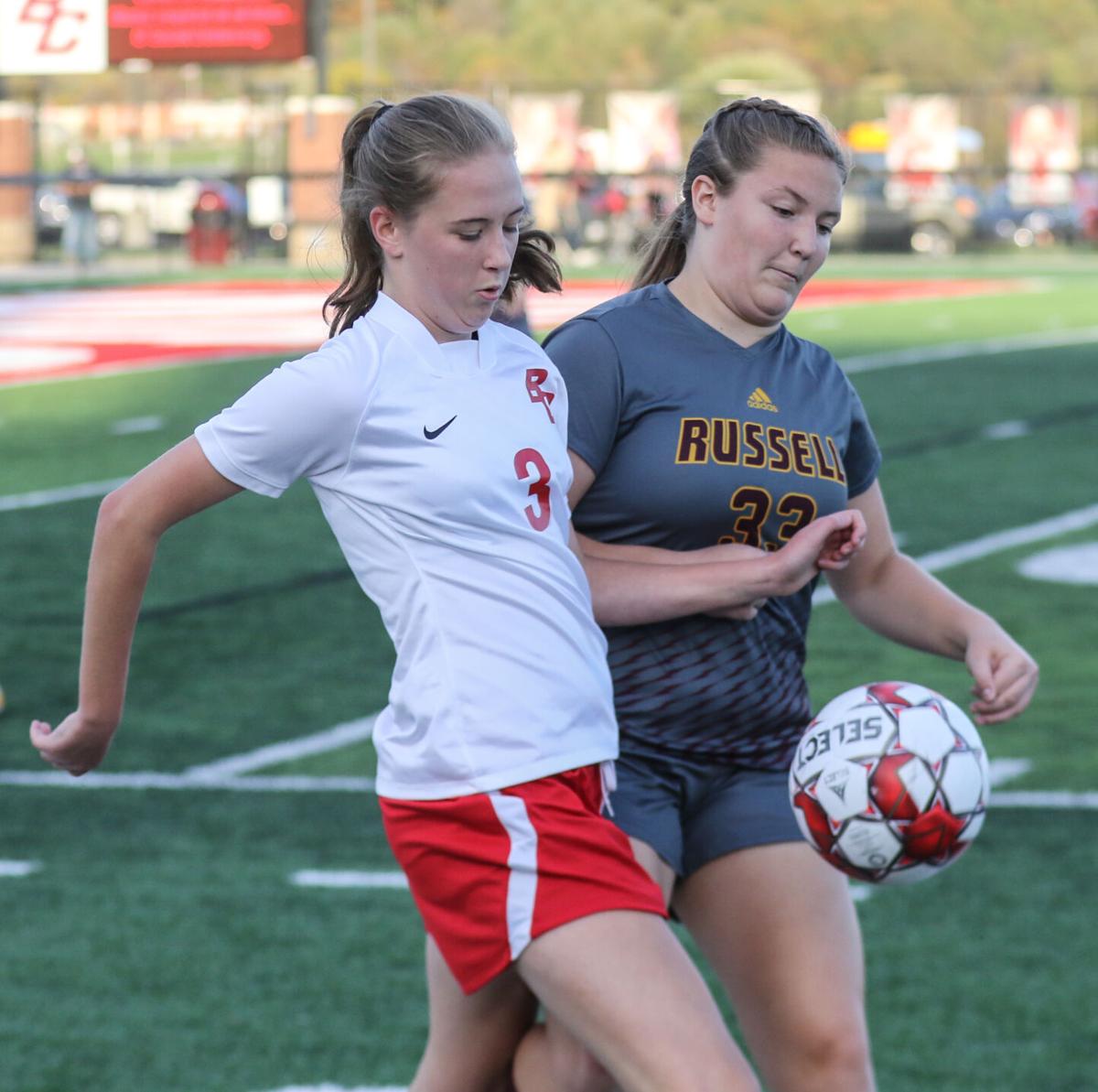 Matt Jones | The Daily Independent Boyd County’s Laci Boyd and Russell’s .Madison Carver fight for control of a ball in the first half of the game. 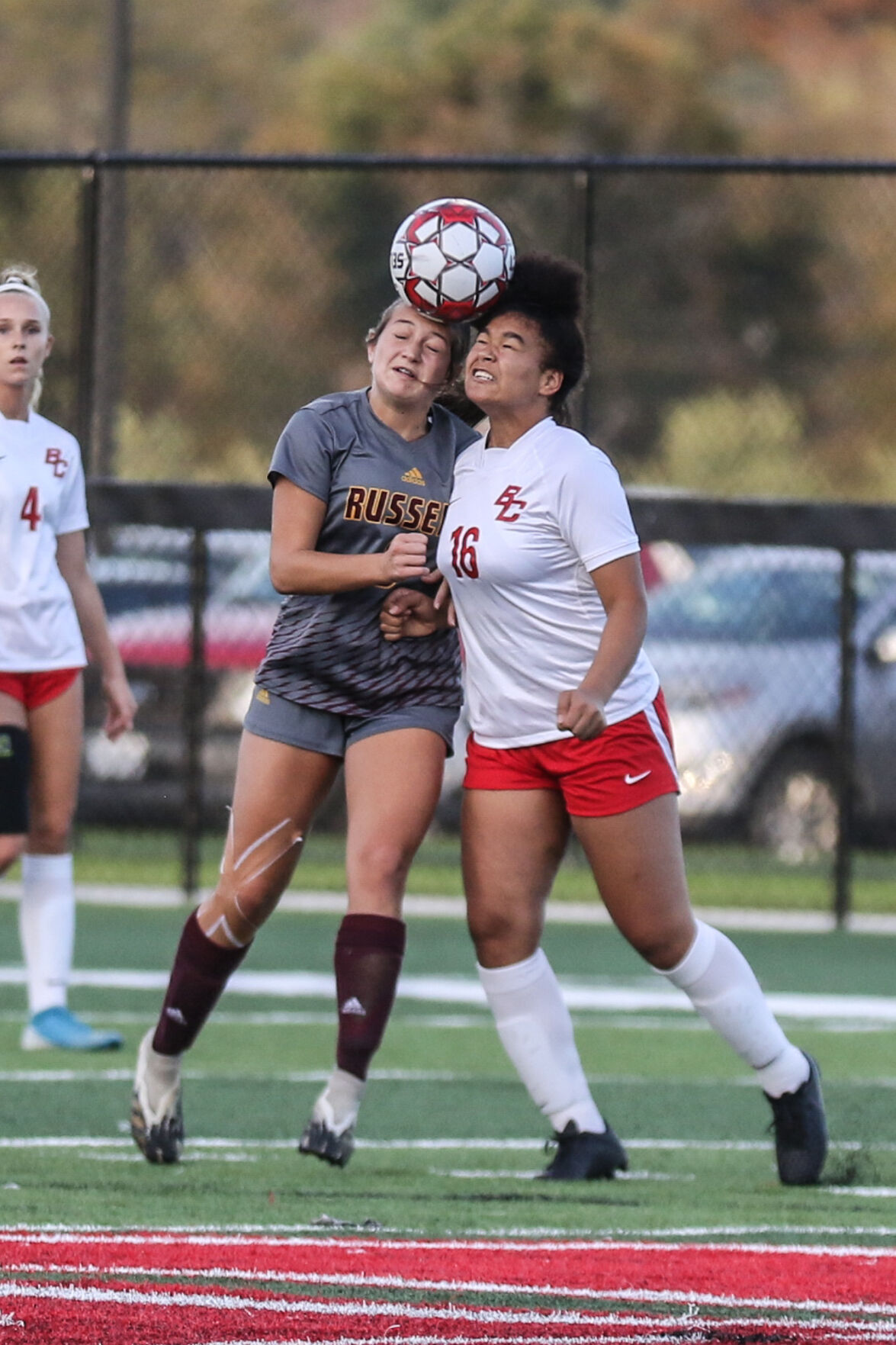 Matt Jones | The Daily Independent Russell’s Lena Blanke gets her head on the ball as does Boyd County’s Shianne Manley during the match. 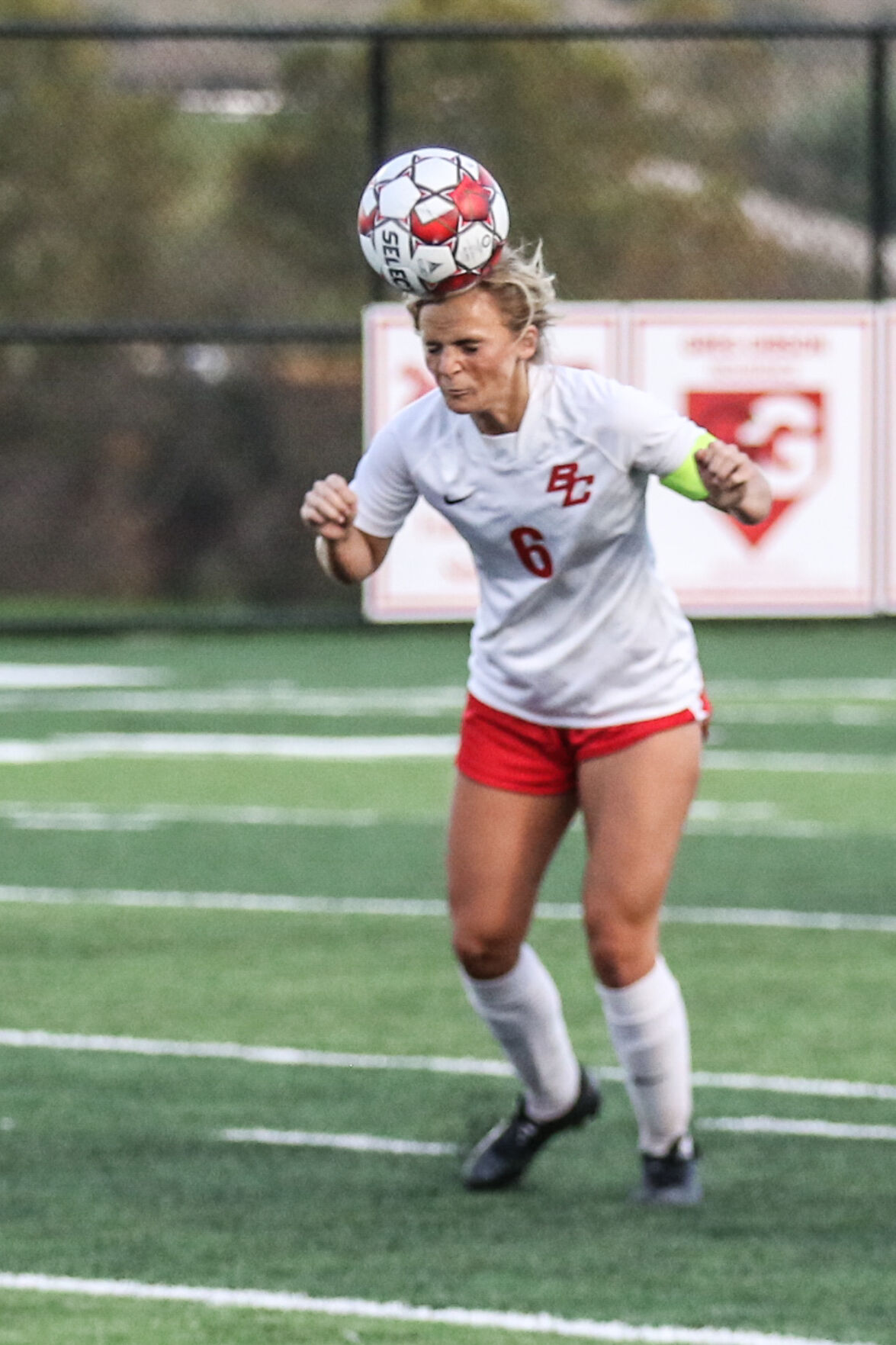 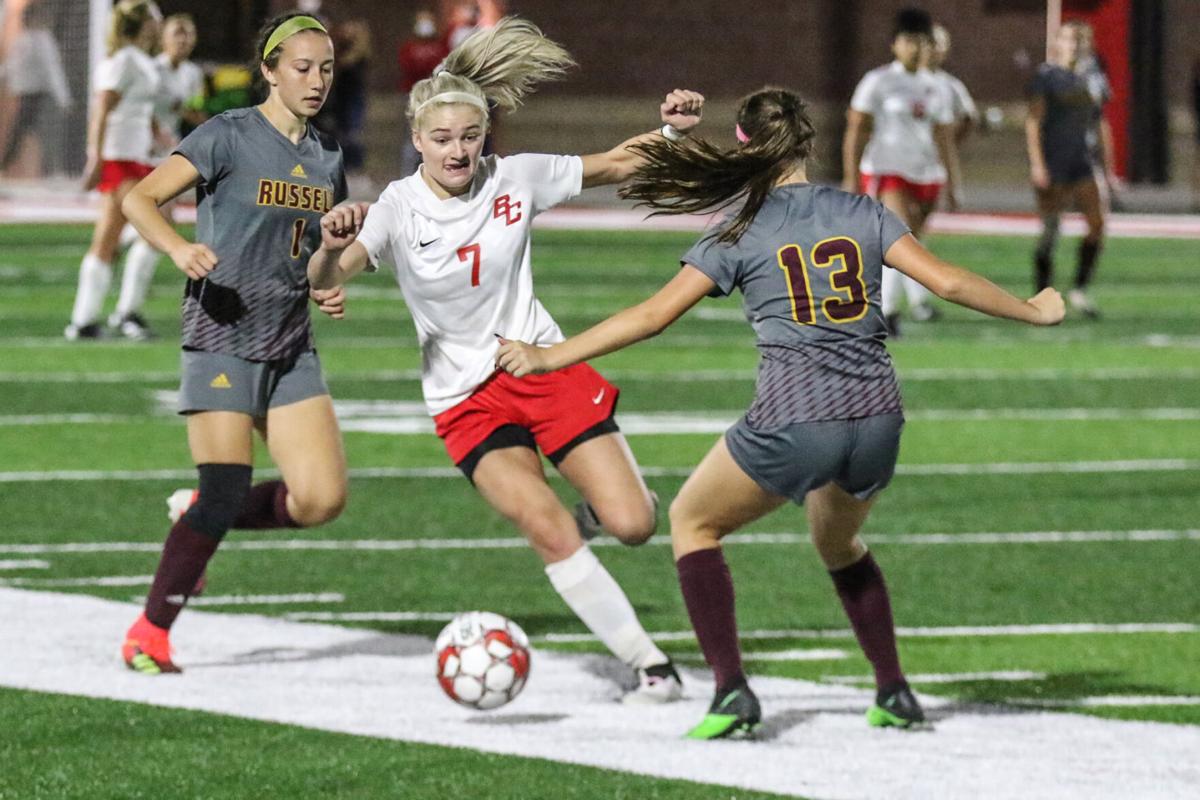 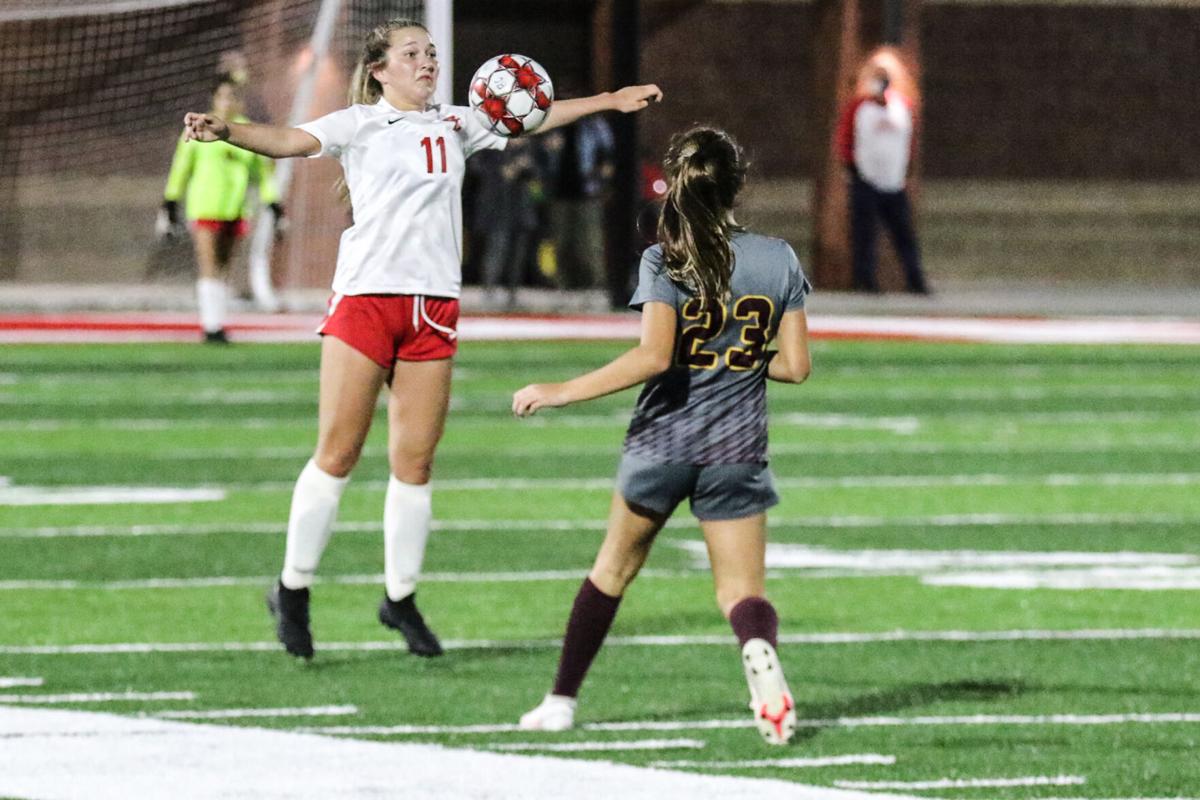 Matt Jones | The Daily Independent Boyd County’s Morgan Ray chests controls a ball in the second half of Wednesday’s win in front of Russell’s Eva Blanke. 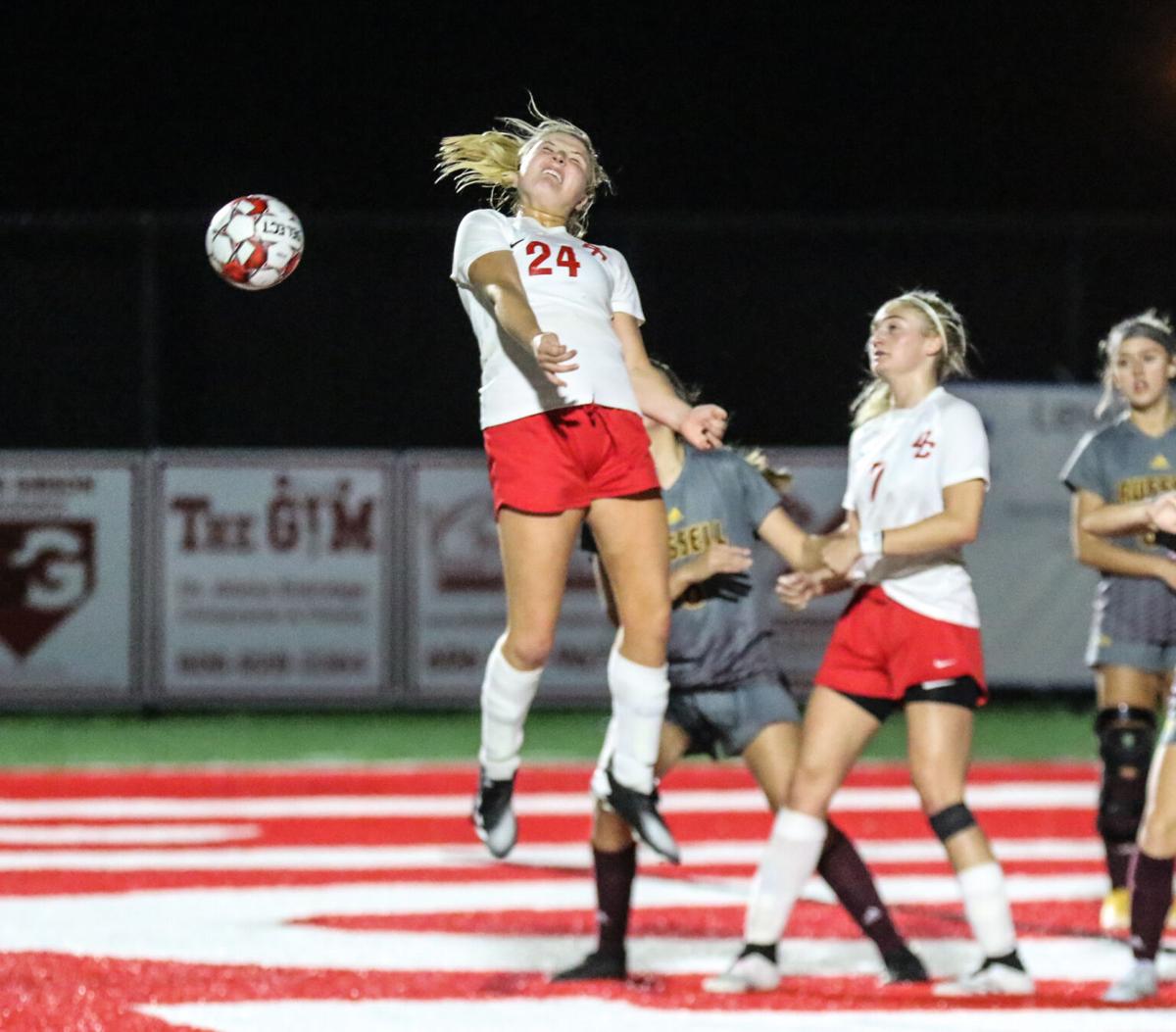 Matt Jones | The Daily Independent Boyd County’s Emma Borders misses the cross from a corner kick in the second half of the game.

Matt Jones | The Daily Independent Boyd County’s Laci Boyd and Russell’s .Madison Carver fight for control of a ball in the first half of the game.

Matt Jones | The Daily Independent Russell’s Lena Blanke gets her head on the ball as does Boyd County’s Shianne Manley during the match.

Matt Jones | The Daily Independent Boyd County’s Morgan Ray chests controls a ball in the second half of Wednesday’s win in front of Russell’s Eva Blanke.

Matt Jones | The Daily Independent Boyd County’s Emma Borders misses the cross from a corner kick in the second half of the game.

CANNONSBURG Billy Kemper could not contain his excitement after Boyd County made history on Wednesday night.

Neither could the Lady Lions girls soccer team.

Boyd County posted its fifth straight shutout after a stout defensive effort. It earned the Lady Lions their first 63rd District Tournament title after a 3-0 victory over Russell.

As the celebration commenced at midfield, Kemper jumped around with his team and laid a championship smooch on Boyd County’s newly acquired hardware.

“When I came here, I was in disbelief, and I said that we would have to change that,” Kemper said after learning the school hadn’t won a district title. “I told them the third year would be our best chance at winning the title, and we did it.”

“When I see these girls work so hard and finally achieve their dreams, I am just so happy for them,” he added. “It makes me feel like I am a young kid with them. I am excited for these girls. They deserve it. They have worked hard for three years for this moment.”

Senior forward Isabella Caldwell connected on the game’s first goal in the 20th minute. Olivia Parsons booted the ball forward as Caldwell gave chase. She beat the defenders to the spot and Caldwell blasted it past the keeper.

“My freshman year had been our best chance to win one, but we fell short in double overtime,” Caldwell said. “Ever since then, we have wanted to win, and this was the year that we knew we had it. We all came out ready to play.”

Caldwell is one of nine seniors on the Boyd County roster that have waited for their opportunity. She has developed chemistry with teammate Laney Whitmore even before she transferred from Huntington St. Joe and became eligible midseason. They were teammates on a travel ball team when they were younger.

The duo hooked up once more in the second half. Whitmore booted it through after she collected a through ball from Caldwell.

“I played soccer with Laney when we were 7 years old for three or four years,” Caldwell said. “We already know each other and how we play. When she came in, everybody instantly wanted to work with her. She made our team so much better.”

Boyd County (9-3) stacked the back line with multiple defenders. It created a seemingly impenetrable wall that quelled the Russell (2-8-2) offensive attack in the opening half.

“Russell gave us more than we bargained for,” Kemper said. “They were a step quicker today. I don’t know if the game two days ago was still in our legs. Russell was really good. They came to fight. They have my respect for that. We just needed to push it up quicker and earlier. … We will try to improve on that.”

Whitmore was granted a penalty kick 30 minutes into the contest after a foul occurred inside the box. The senior lined up the shot and found the twine inside the left post. The Lady Lions appeared to record another tally before halftime, but the bouncing ball was ruled to have hit the football uprights before it crossed the goal line.

“If it wasn’t for our defensive line, our offense would not be as strong as it is,” Caldwell said. “We have Lexi Marcum back there. She can see the whole field and tell us where to attack and where to move. We have a freshman goalkeeper that has had four straight shutouts. This is amazing. As a senior, to see a freshman doing that, it really motivates you to do better.”

The Lady Devils mounted a charge in the second half and found some striking lanes, but they were few and far between. Lady Lions keeper Isabella Opell took an aggressive approach to corral stray balls and stall Russell’s offensive chances.

The Lady Devils are still looking for inspiration to spark their season resurgence. Both teams will play in the 16th Region Tournament at Boyd County. Play starts on Saturday.

“We were able to possess a little more (in the second half),” Russell coach John Perry said. “Boyd County got up 2-0 in the first half. They built a wall in front of the goal. We have to find a way to overcome that main obstacle and be able to put the ball in the back of the net. We have struggled with that all year.”

Boyd County extended their winning streak to nine games after an 0-3 start. Now, the Lady Lions will enter the region tournament as a district champion for the first time.

“Honestly, we have never been nervous to come and play,” Caldwell said. “We go and play our game. We go and have fun.”