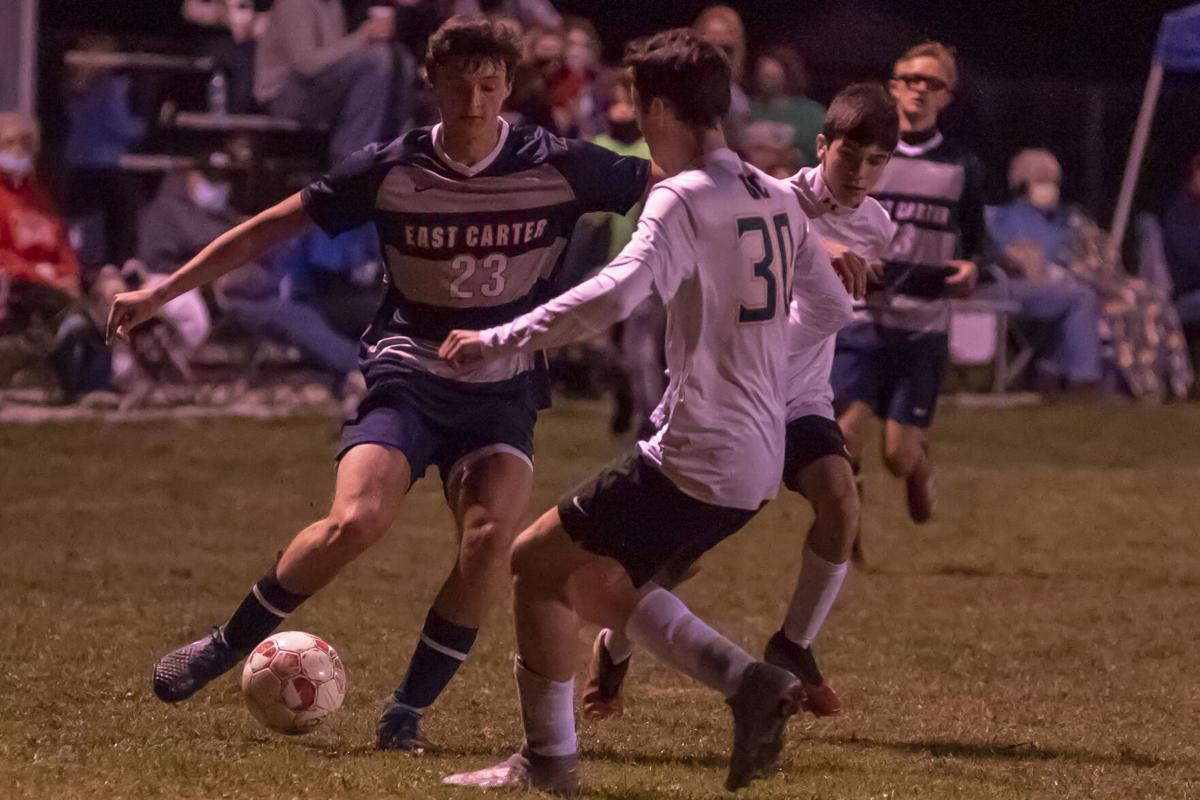 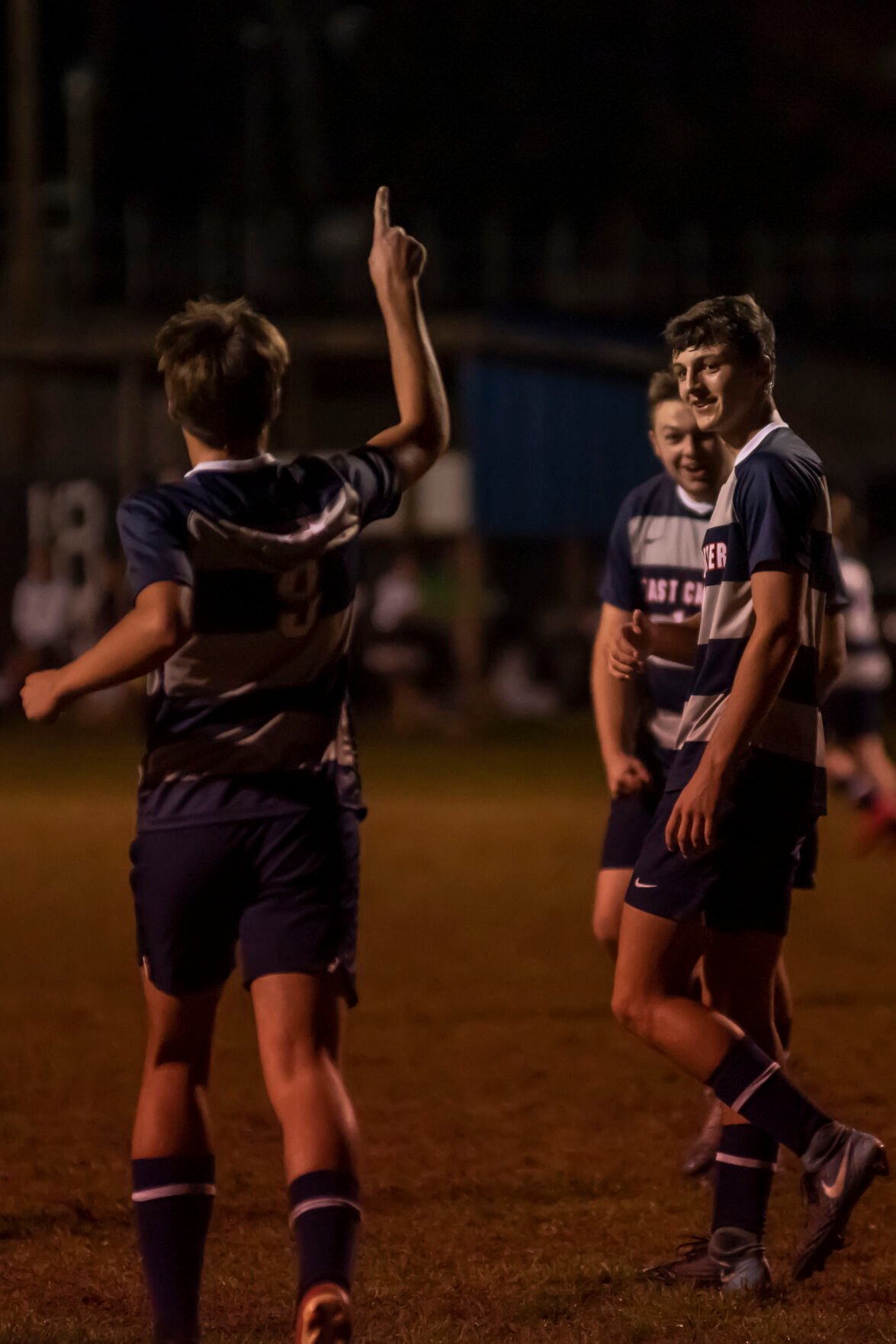 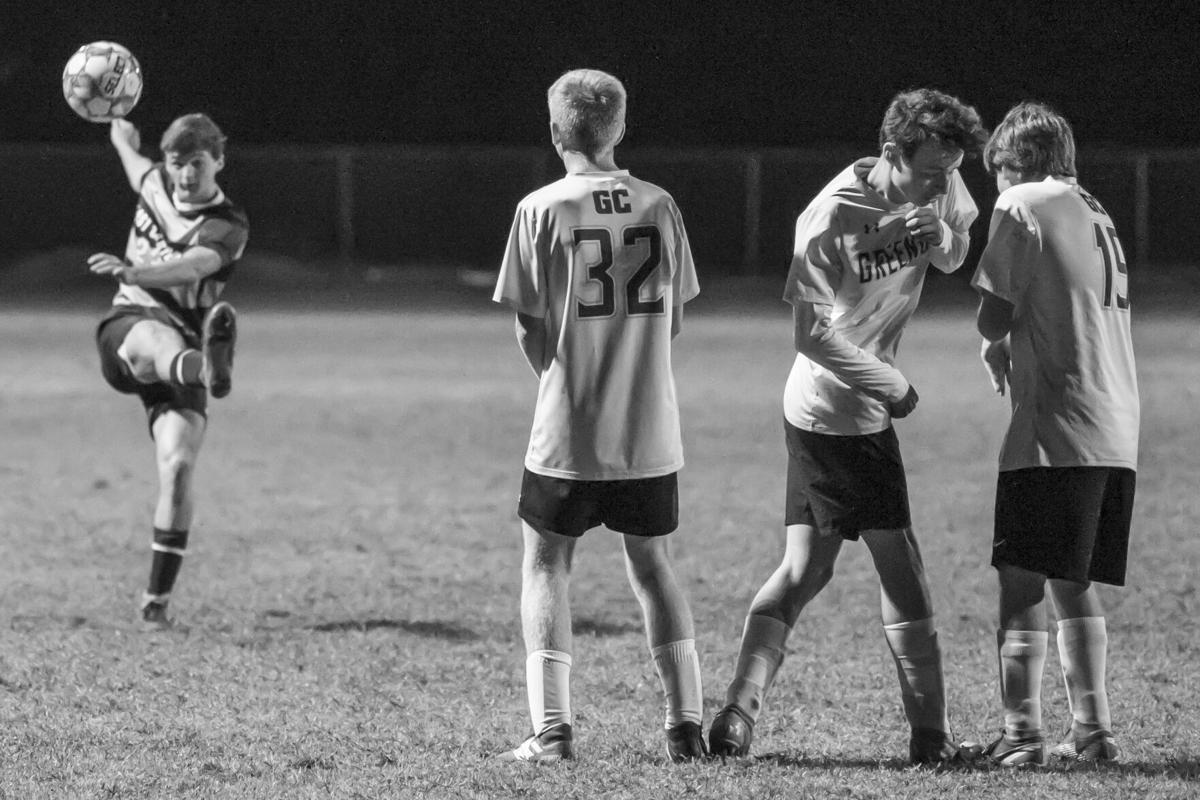 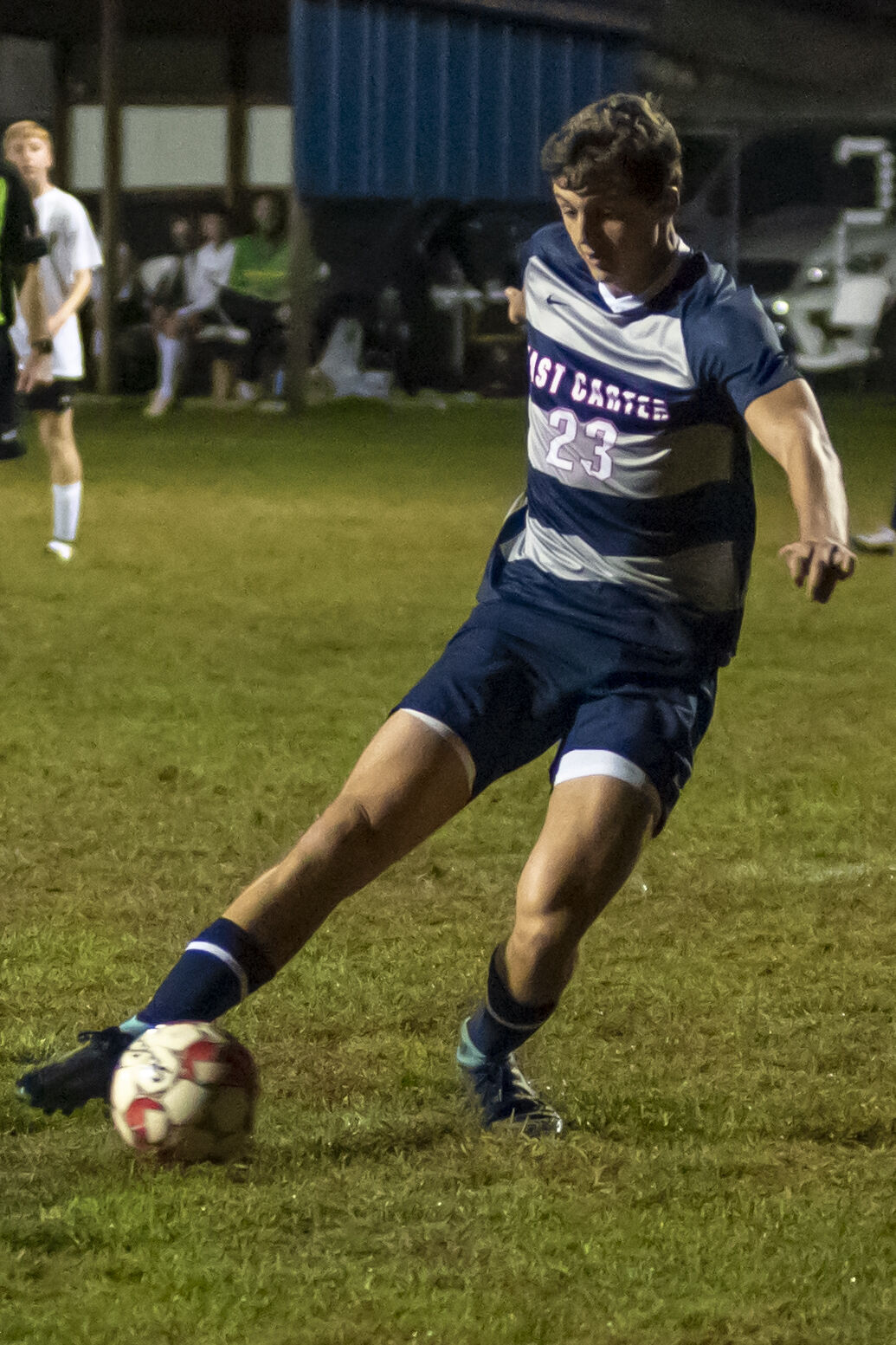 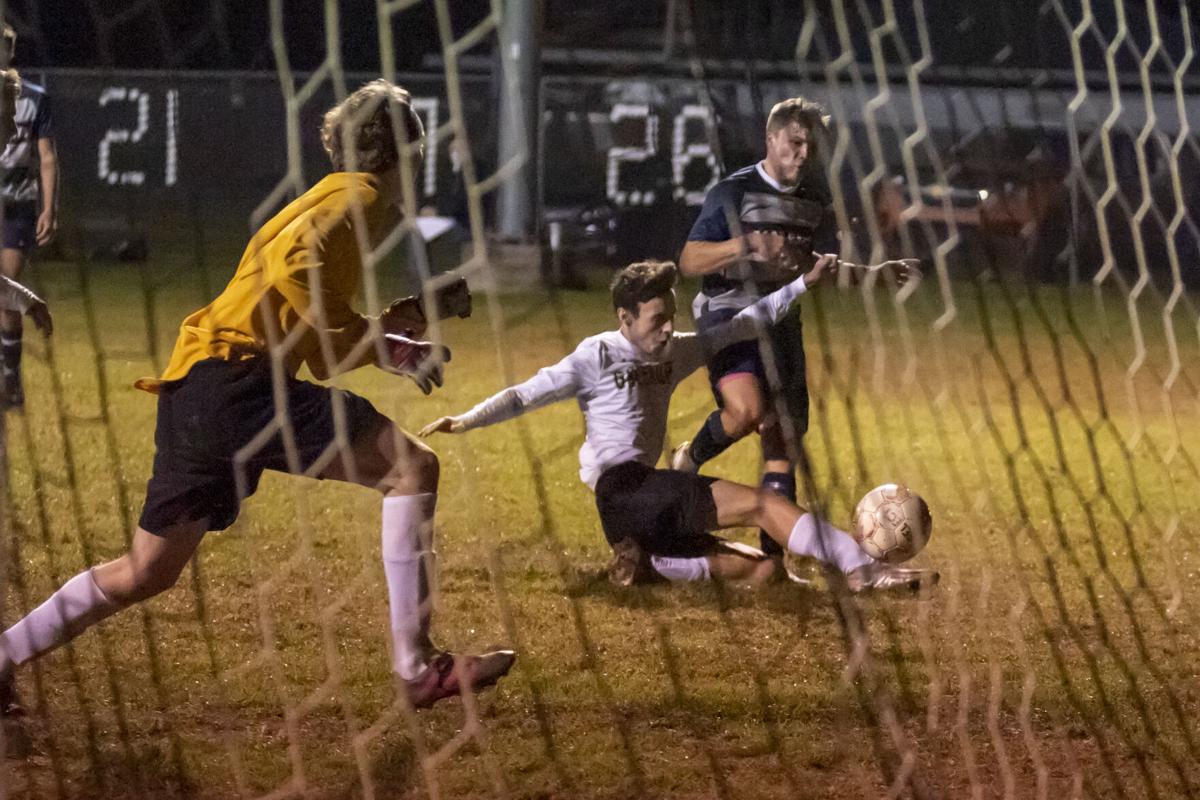 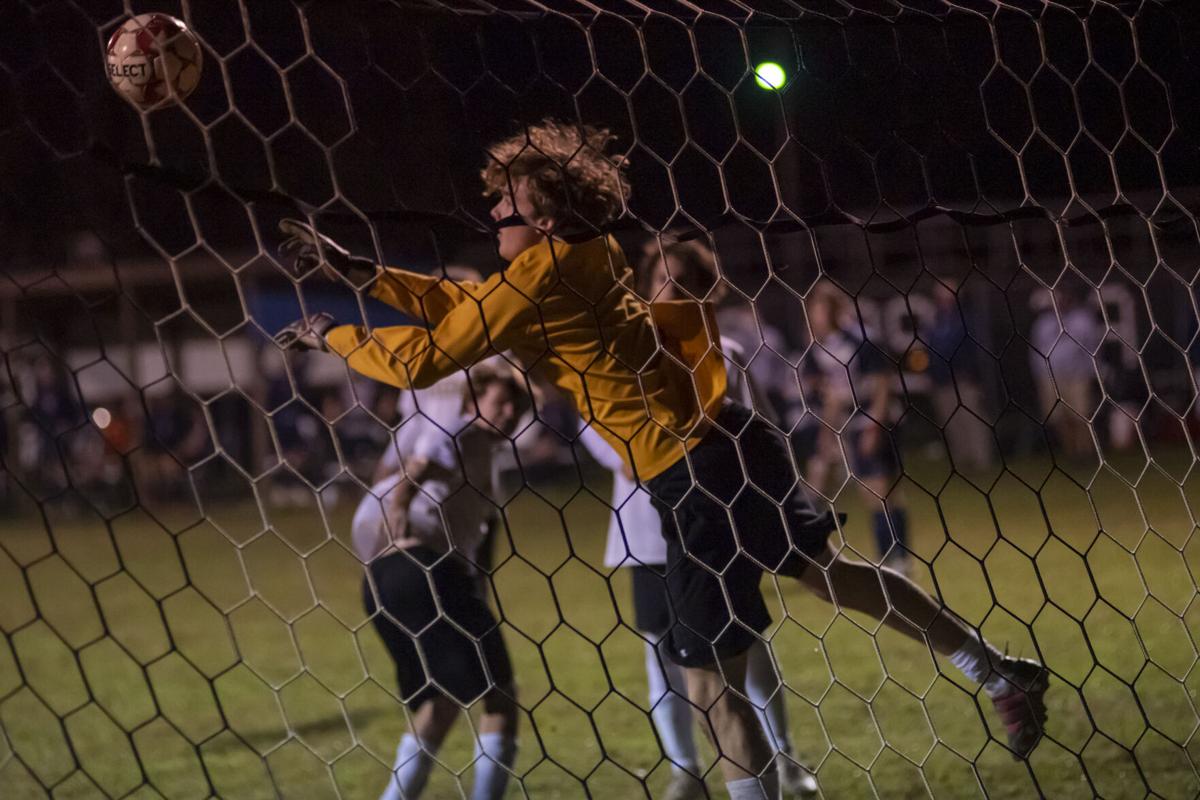 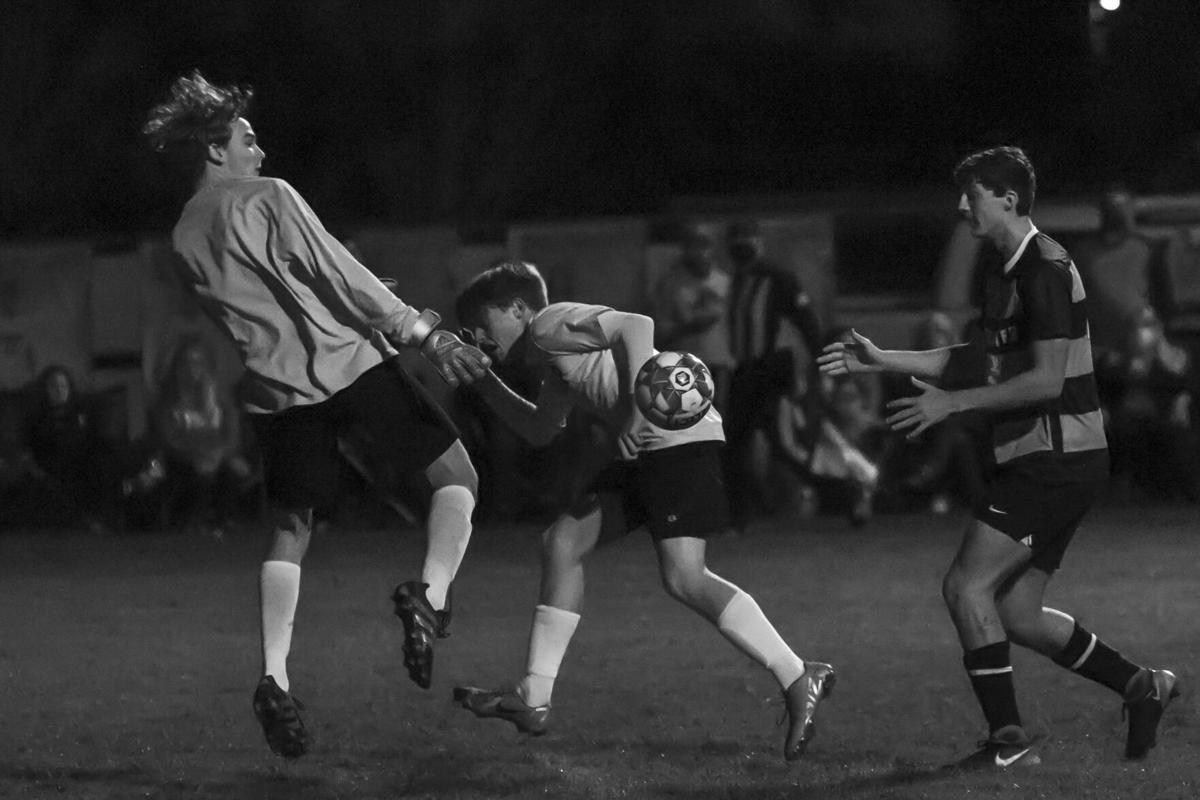 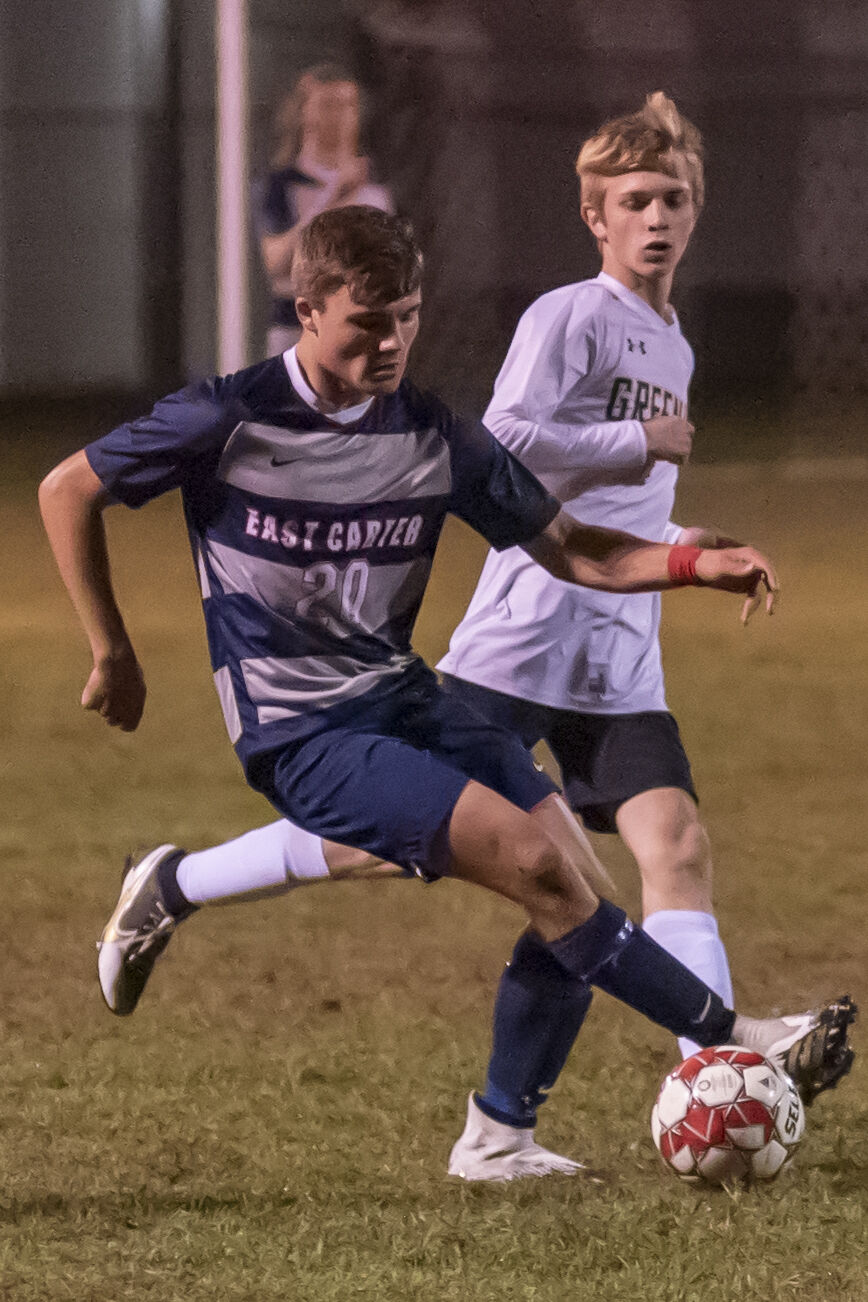 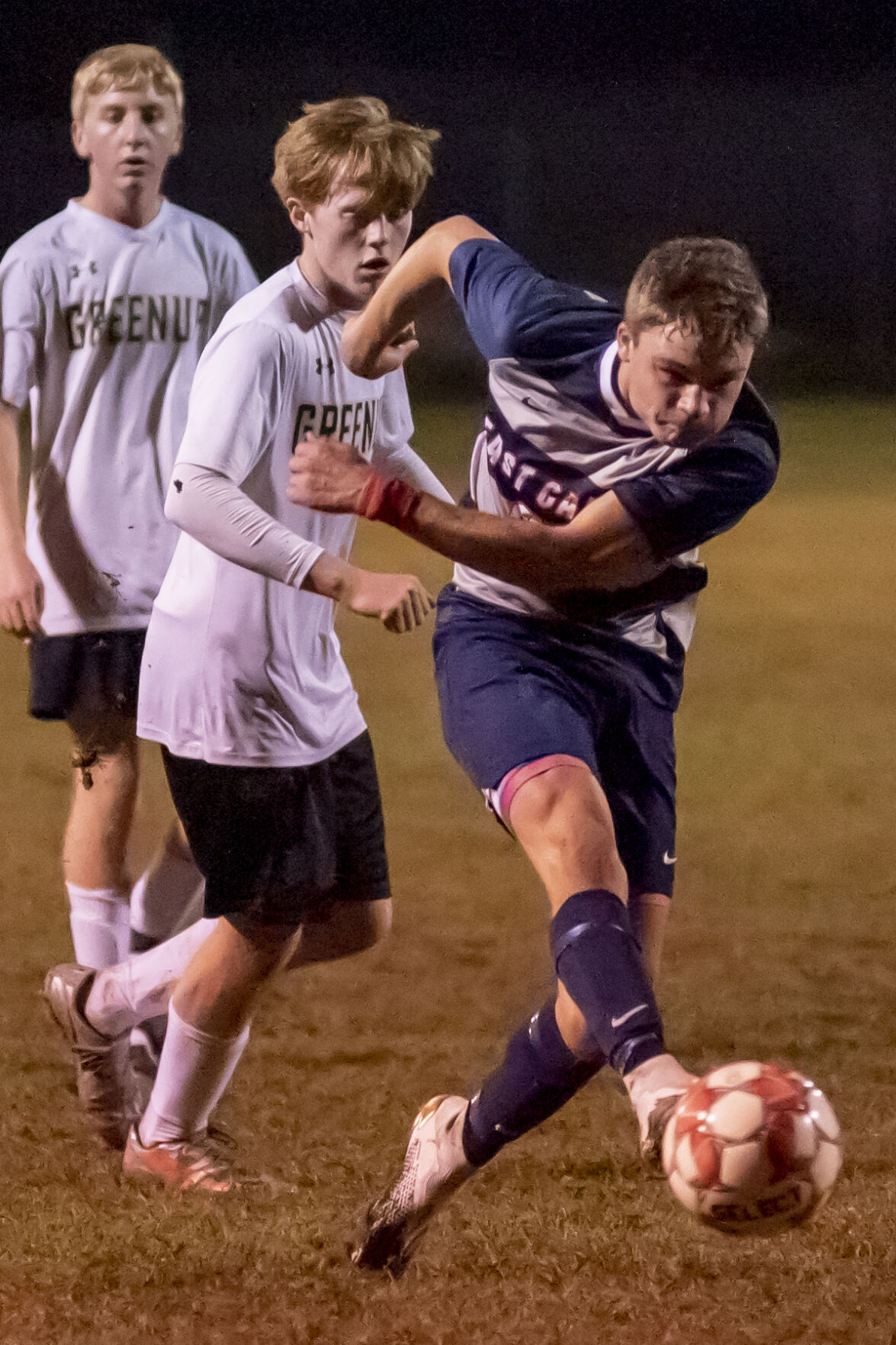 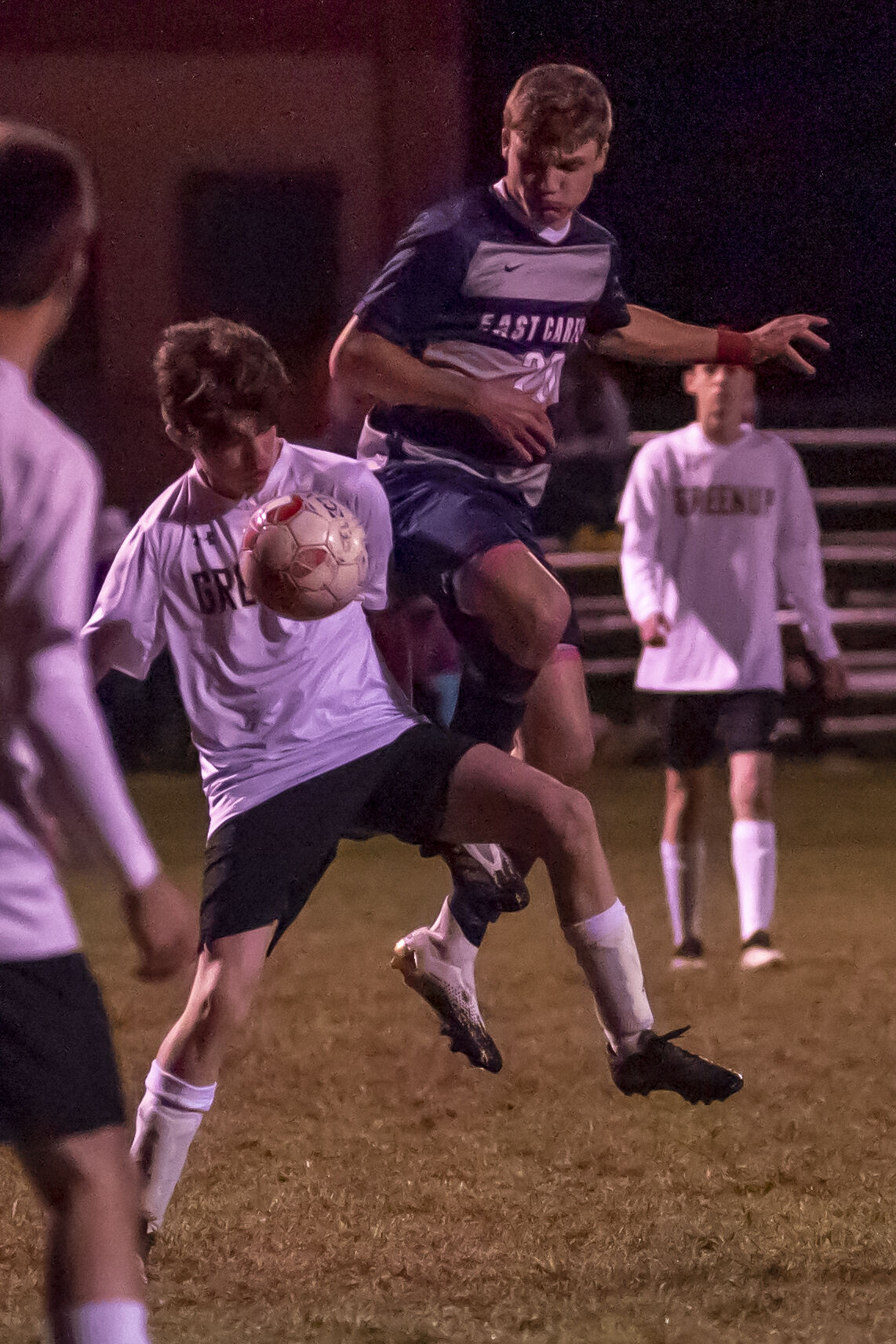 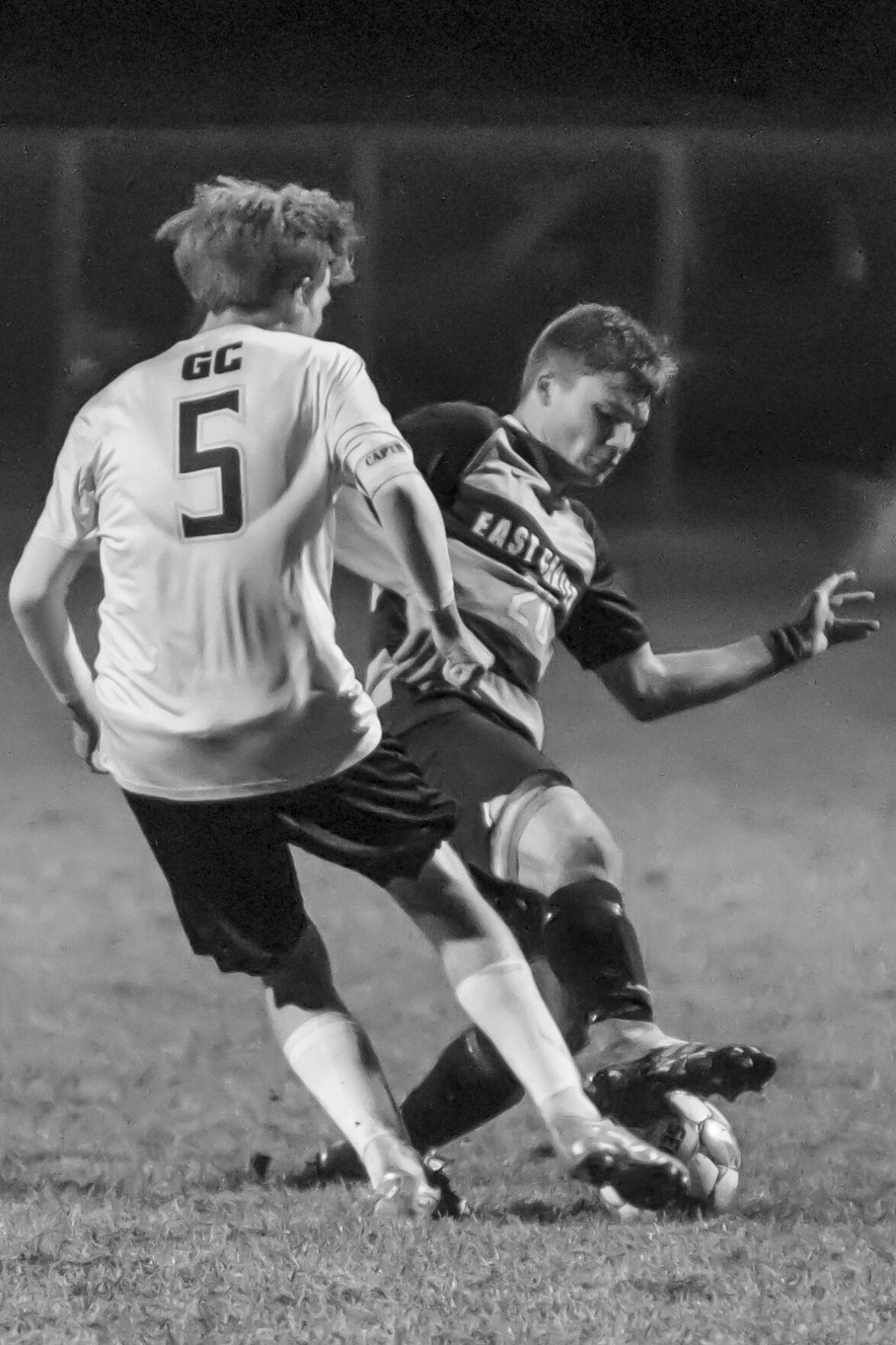 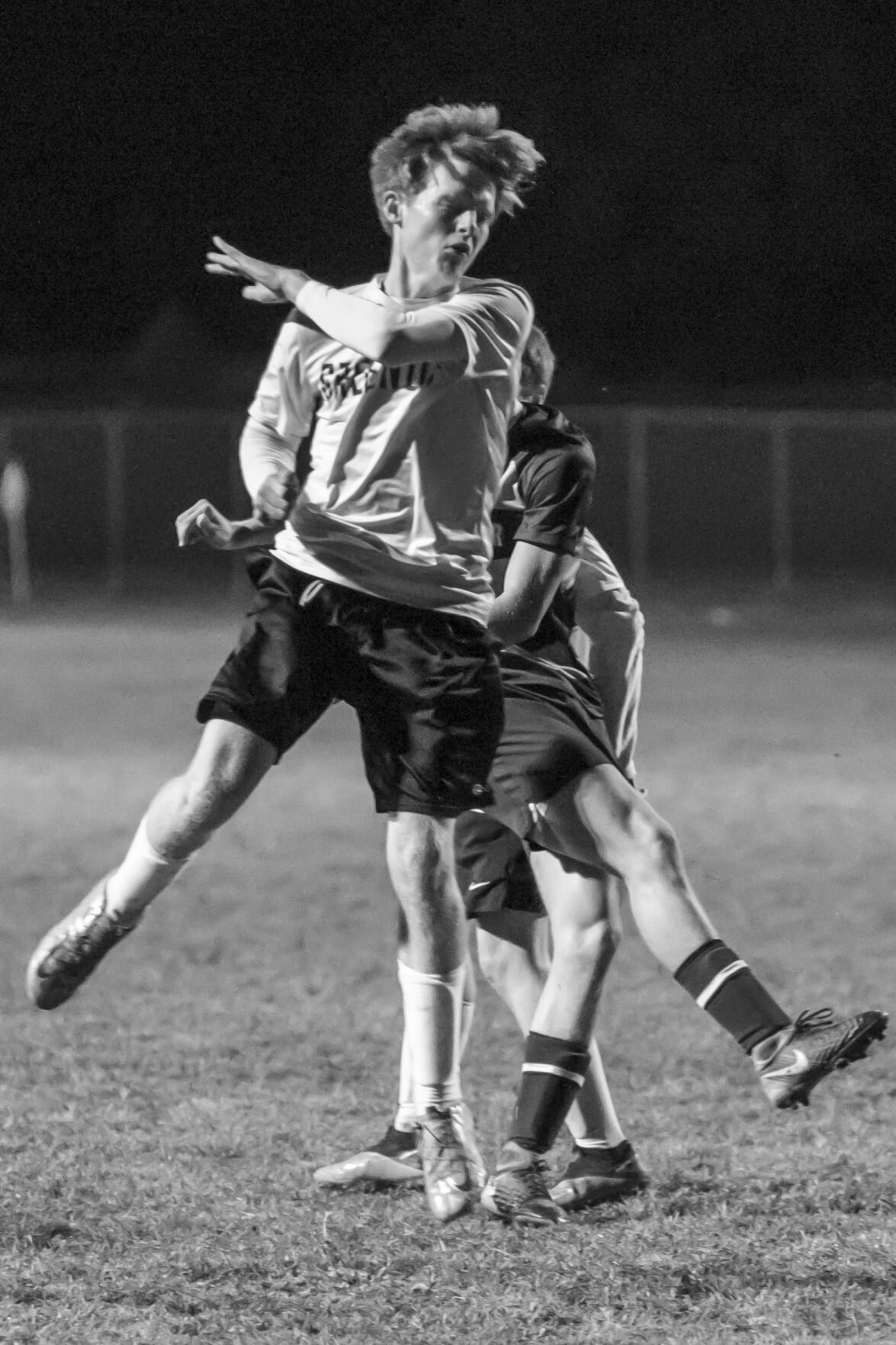 “Everyone was looking at Ethan Miller and they know he has the most goals and as he starts moving, you can almost watch the whole team shift to his side of the field,” Huddle said.

Move as the Musketeers may, they did everything in their power to limit the high-octane scoring attack of Miller and fellow Raider Logan Cales. While Miller drew triple-team coverage from the Musketeers, Cales waited on the back side for an ample opportunity to connect.

With Miller drawing much of the defensive pressure, Cales lurked behind the defense and capitalized early and often with a pair of first-half goals.

“Logan is a good enough player and smart enough player that he sees the gaps and there’s been times this year that he’s had some really good looks simply because Miller moves to one side of the field,” Huddle said.

Once the defense tried to counter the attack of Cales, Miller struck thrice, a hat trick in a span of six minutes. He broke the 16th Region all-time scoring record of 107 goals previously held by Ashland alum Stuart Smith (1991) on his second goal of the night.

“It’s good to have the record done before the region tournament just so we can focus on each other and trying to win the game instead of banging goals,” Miller said.

Miller tied the record at the 33rd minute mark and broke the record 60 seconds later. At the 39-minute mark, Miller recorded the hat trick off a feed from Cales with six seconds before halftime.

Cales netted his third score of the affair at the 44-minute mark for a 6-0 East Carter lead. While Cales described his goals as nothing special, all three came off deflections and his location for each shot was pinpoint perfection. However, his first goal was all the proof that was needed after a ball ricocheted to the top of the 18-yard box from a bullet of a shot from Miller that was initially stopped by Greenup County goalie Konnor Griffith.

“Everything was a little bit stagnant but when Logan scored, it loosened everybody up,” Huddle said. “Once that happened, I think everyone realized this was just another game and we can just keep playing, and after that it started flowing much better.”

After holding East Carter to only one goal through the first 24 minutes, Greenup County surrendered three more in the final 16 minutes of the half, a problem coach Brad Quillen said was a key to the game for the Musketeers.

“Before the game we talked about the problem when you play a team like East Carter,” Quillen said. “They are very disciplined. If you run up on them too hard, they are going to drop it. If you don’t run up on them far enough, they are going to launch it. We wanted to get up just close enough so they couldn’t launch it on us, but close enough so they could just go around us. But we overran the ball a lot in the first half.”

Quillen was pleased with his team’s second-half performance after making adjustments on their approach at halftime. Overall, he was happy just to see his team take the field for another contest.

“We lost a lot of games due to COVID-19 this year,” Quillen said. “This is only their fifth game of the season. I’ve very happy for them. They got their first win in a while (Monday) and we get to play again. We get to play Saturday, so we will wait to see who that will be against.”

Huddle applauded the Greenup County game plan and their efforts to slow down his high-scoring Raiders.

“I give their coach and players a lot of credit,” Huddle said. “They played extremely hard. When you have nine, 10 guys behind the ball and you are defending like that, it doesn’t matter the disadvantage in records or goals scored, it’s going to be difficult. They made it really difficult on us to score tonight and that’s complete credit to them. I think our playmakers were what made them have to pull out a little bit and allowed us to make plays and get more comfortable.”

Gage Erwin closed out the East Carter scoring with a goal at the 69th minute.

Now the Raiders await their region tournament opponent with hopes of returning to the state tournament for the third time in four seasons.

“As a senior, to put that district championship in there all four years feels pretty nice, but we are going after bigger fish,” Cales said.