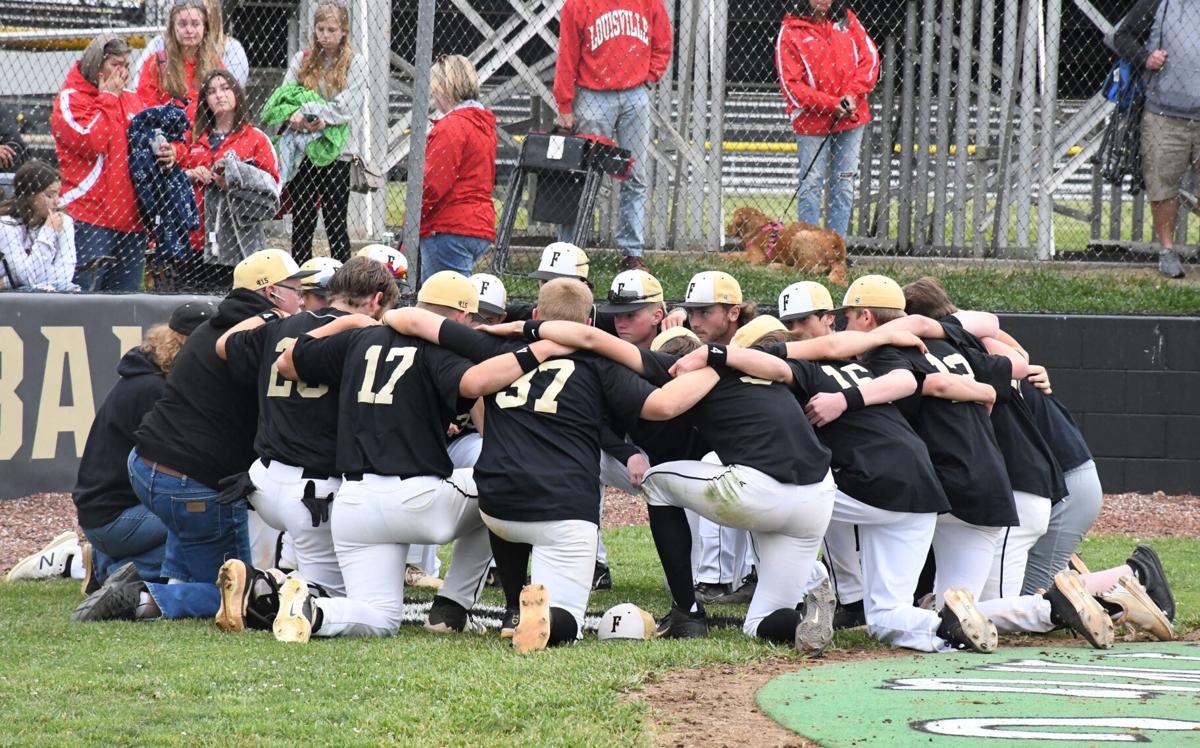 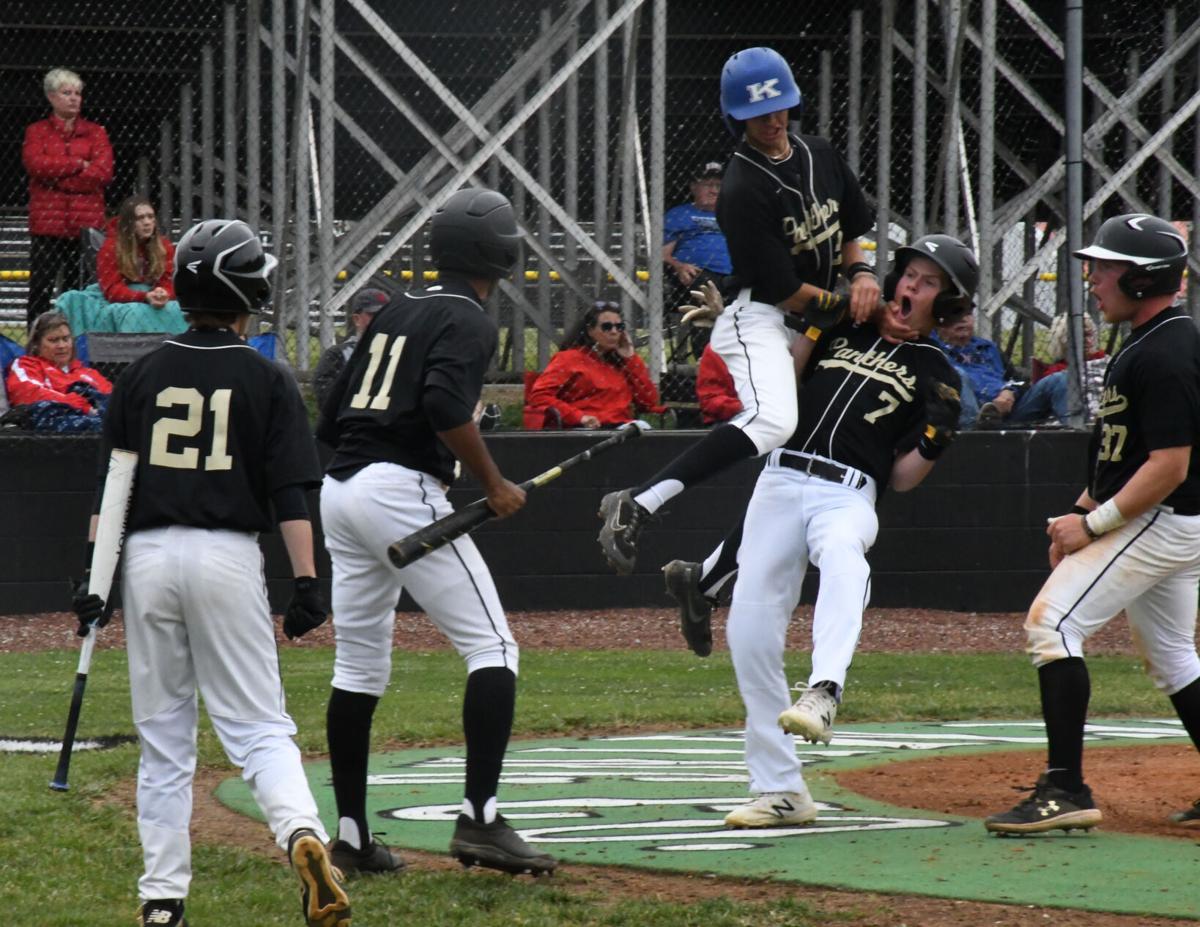 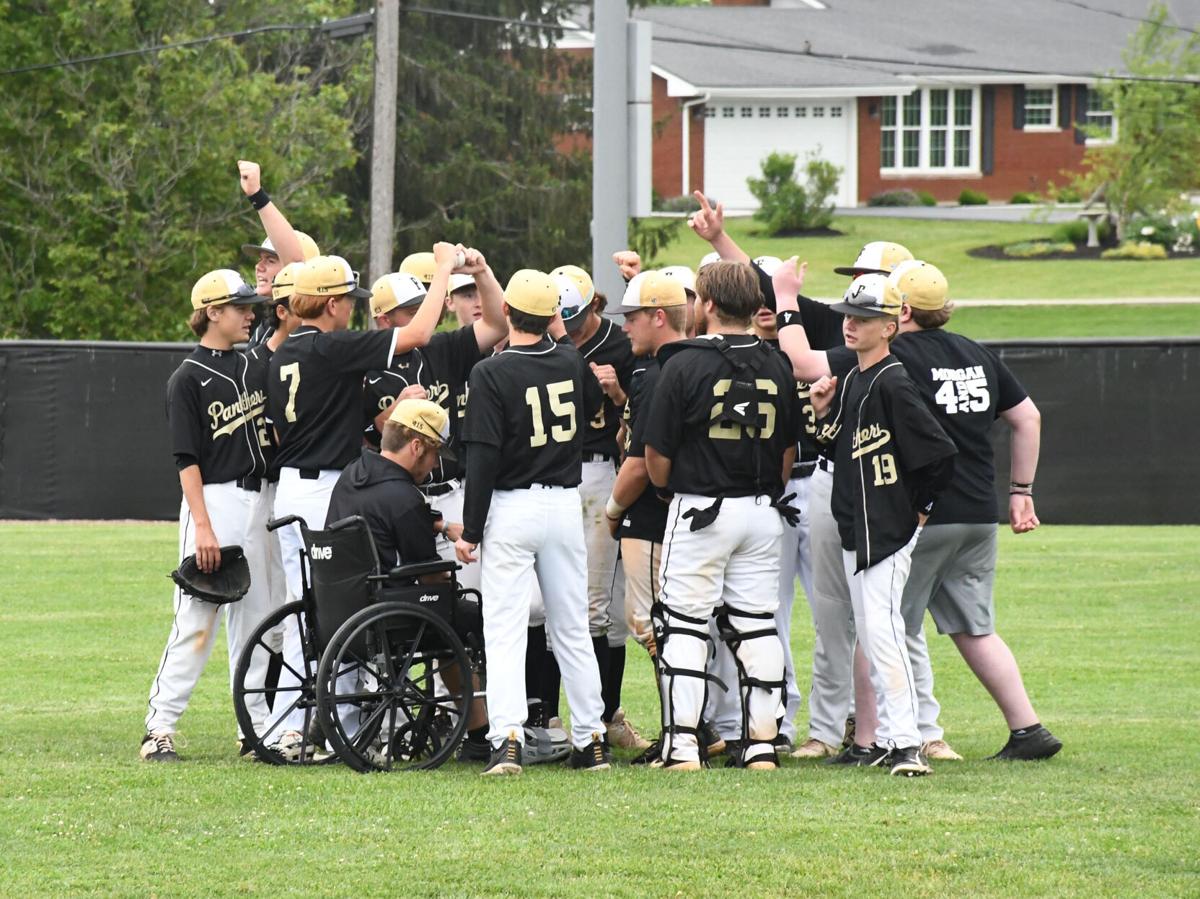 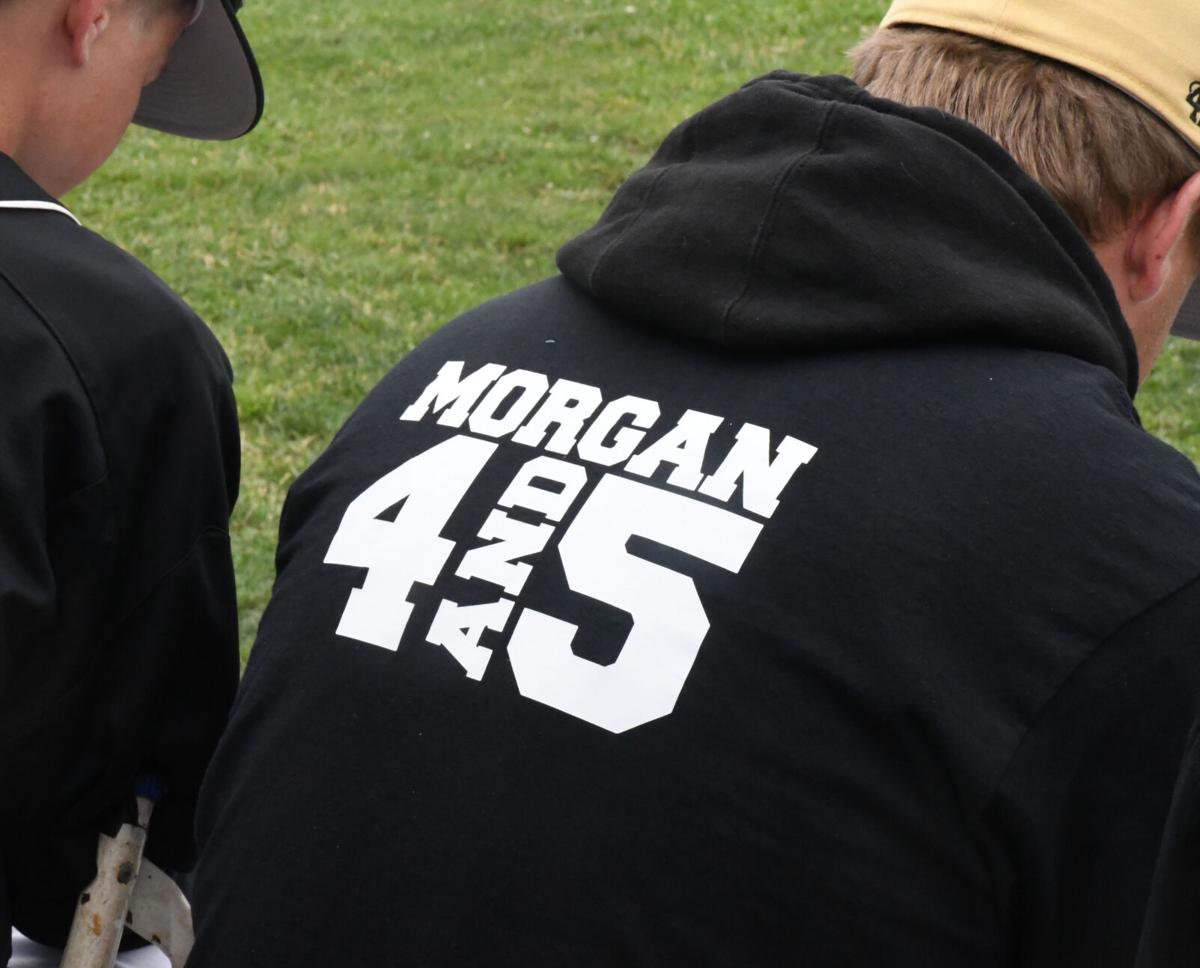 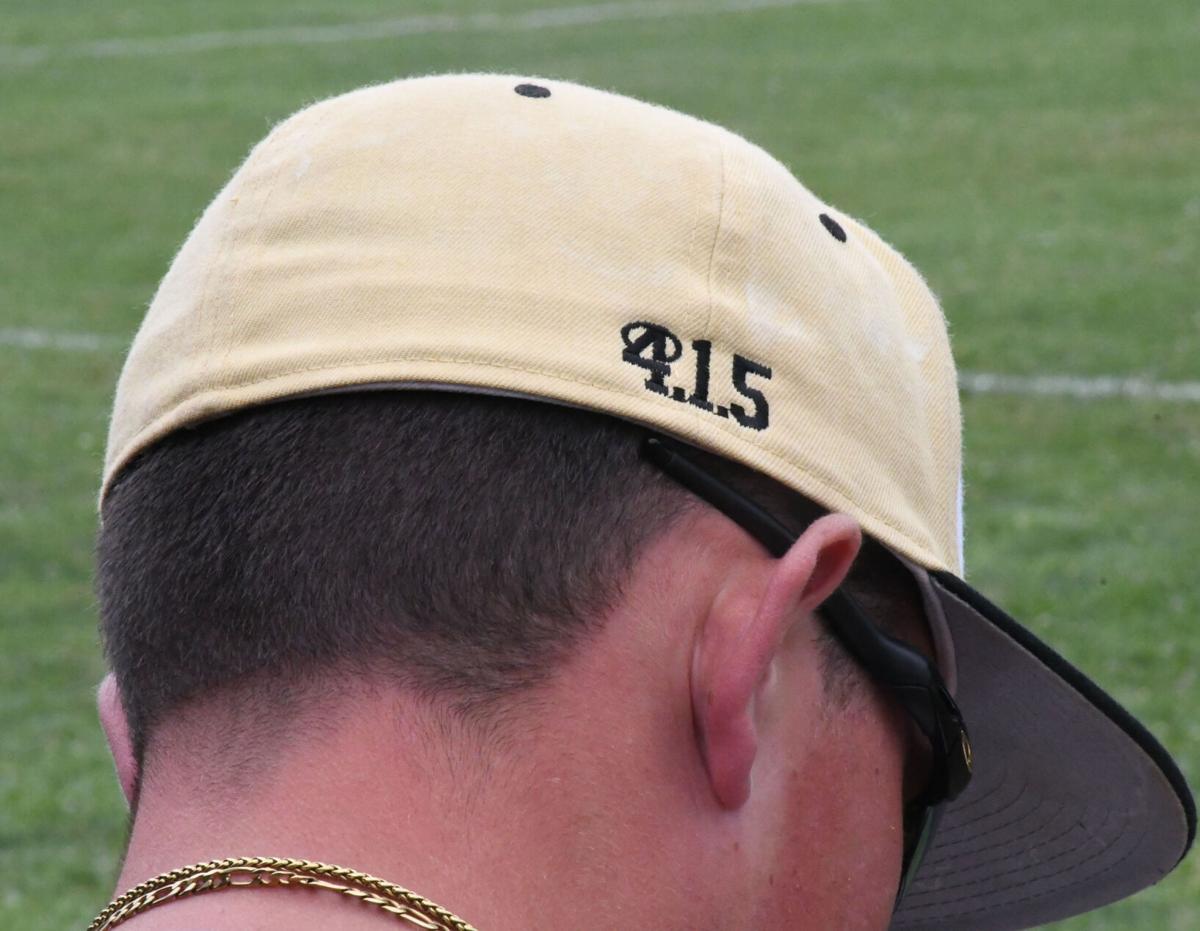 FLEMINGSBURG Even before their 61st District semifinal win or go home game with Bath County, the Fleming County Panthers knew Buddy Morgan was there with them.

The Panthers’ senior catcher died on Friday after injuries sustained from a vehicle accident on May 15. A little more than 48 hours later, the Panthers were playing to continue their season.

With the “415” rally cry up on the scoreboard before the game, Morgan’s No. 4 spray-painted on the field behind the plate and a moment of silence for the team’s primary catcher and leading hitter, the Panthers wanted to make Morgan and his family were part of Sunday’s game.

Once the game began, the signs of Buddy being there kept coming around. Even when it ended, the No. 4 was on the scoreboard once more, this time for the Panthers' runs as they blanked the Wildcats 4-0 to earn a berth into Monday’s district championship.

After the game as they huddled around Hoss Morgan in his wheelchair in right field, Buddy’s younger brother who was also in the accident, Panthers coach Austin Hart told them all to look over their shoulders into left field.

“All I said was turn around. Turn around and look at the scoreboard,” Hart said. “They said, ‘Yep, he’s here, he’s here.’ That’s what got us through it. We’re just one big family right now.”

It was an emotional day at Panther Field after a moment of silence and a speech before the game to remember Buddy, with a big crowd on hand to show their support.

Once play got going, an unlikely source got the Panthers going, the No. 9 hitter in the lineup, Levi Denton. He hit a bases-clearing, three-run triple to get the Panthers on the board first in the second inning.

“It’s huge," Denton said. "Before the at-bat, I would go up and touch Buddy’s jersey. I don’t know, there was something about this game that felt like there was somebody with me through the at-bats and it carried me."

Denton ended the day with two triples. The first one was all the damage Larkin McKee needed on the mound.

The Panthers junior threw 121 pitches, the last a stringing strike to cap off his complete-game, seven-hit performance with nine punchouts.

“We came out ready to play," McKee said. "Everybody knows Buddy was out there with us. Motivation, just tired of losing first round, especially to (Bath County). Just fought our hearts out today."

McKee worked out of some jams, stranding 10 runners on base throughout the game. He escaped Bath County runners on second and third in the first with one out, first and second in the second with two outs, and bases loaded and two outs in the fifth. He preserved the shutout in the seventh as the Wildcats left runners on the corners to finish.

While Jayden Argo got loose in the bullpen, Hart knew he was sticking with his ace until he couldn’t go anymore.

“He was at 118 pitches on that last batter, so I was going to have to pull him if he got to another batter, but he pulled it out,” Hart said. “He was throwing the curveball for a strike, he was throwing strikes, wasn’t walking many and did what he needed to do. Larkin got the job done.”

It gets the Panthers to the 16th Region Tournament for the first time since 2016 and snapped a three-game losing streak to the Wildcats in the first round of the district tournament.

“We’ve been so close every year, we just needed one or two timely hits and we finally got them this year," Hart said. "I’m very pleased with the team, very pleased with how well we’re coming together. It’s an awful time right now thinking about Buddy, but he’s bringing the team together and that’s what we want."

After the game, the Panthers knelt around the No. 4 behind the plate and had a prayer with Morgan’s parents coming out on the field to help guide them through it. While Morgan might not be there with them physically, they have no doubts in their mind he’s still with them spiritually.

“Buddy will be missed, but there’s no better way to put it than he’s still here," Hart said. "I mean 4-0, No. 4 behind the plate, he’s here. Braden Clark played his position behind the plate tonight and first at-bat, he gets a base hit. Couldn’t have asked for a better game."

The Panthers now move on to today’s 61st District championship at noon to take on Rowan County. The Vikings disposed of Menifee County in the first game of the day, 13-0 in five innings.

Rowan County defeated Fleming County twice during the regular season, 18-5 on April 26 and 11-1 on on April 27. The Vikings have won the last six district titles.

Bath County finished its season at 20-17.

Each team had seven hits in the contest. The Wildcats collected three errors in the field while the Panthers didn’t commit any. Jake Smith led Bath County with three hits at the plate. Zane Blevins took the loss on the mound, throwing six innings with six hits with two earned runs, eight strikeouts and three walks.

Denton’s two three-baggers led the Panthers at the plate. Five others collected a hit apiece — Clark with a double and McKee, Argo, Austin James and Keaton Donahue with a single each.

The Panthers will vie for their first district title since 2012 on Monday.