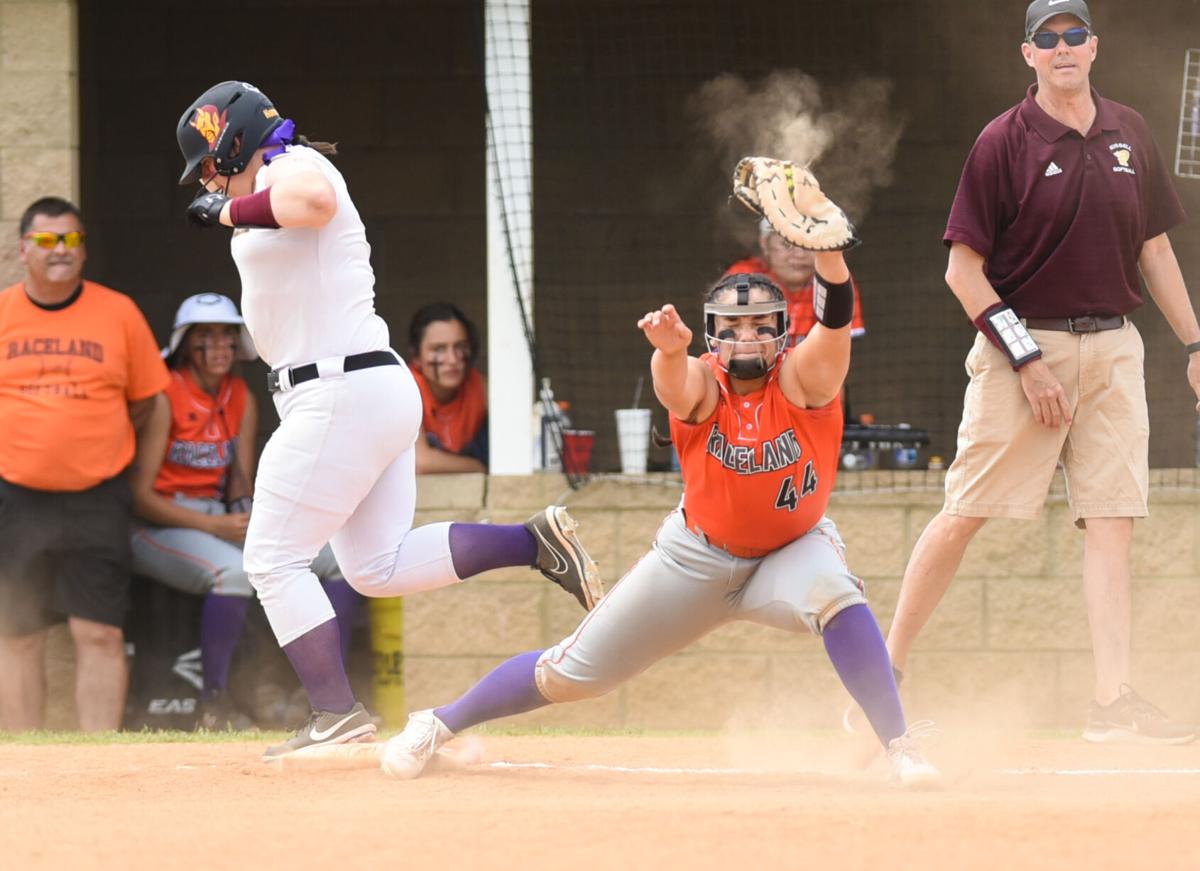 Raceland's Chloe Collins stretches to catch the ball for the out against Russell on Saturday at Russell. MARTY CONLEY/ FOR THE DAILY INDEPENDENT 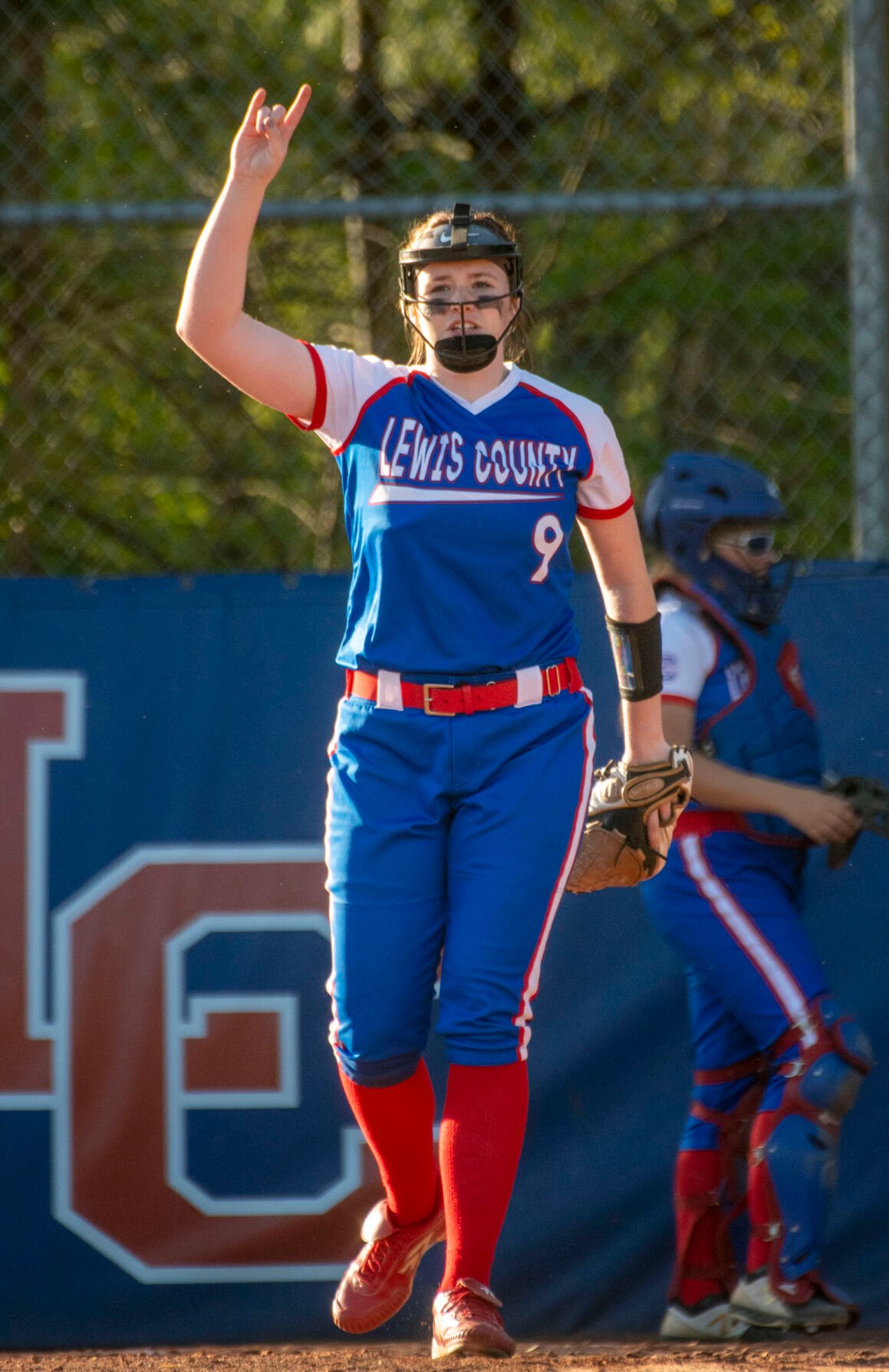 Lewis County pitcher Emily Cole signals the outs after striking out a Russell batter Friday, April 30, 2021 during a softball game in Vanceburg, Ky. John Flavell / For The Daily Independent

Raceland's Chloe Collins stretches to catch the ball for the out against Russell on Saturday at Russell. MARTY CONLEY/ FOR THE DAILY INDEPENDENT

Lewis County pitcher Emily Cole signals the outs after striking out a Russell batter Friday, April 30, 2021 during a softball game in Vanceburg, Ky. John Flavell / For The Daily Independent

CANNONSBURG If you scored a run on Emily Cole this season, you had to earn it.

Most Lewis County opponents found that to be the case.

The Lady Lions gave up only 112 runs over 32 games this season behind the strong right arm of Cole. The sophomore touted a minuscule 0.88 ERA, the second-lowest in the state, according to KHSAA statistics, struck out 327 batters and closed out a stellar season with 22 wins inside the circle.

“I feel like I’m a lot stronger,” Cole said. “I have worked out a lot. I feel like I have a better drop ball now. I have really worked on my pitches over the winter. I think that’s the biggest change to my game.”

“I have worked on the rise ball,” she added. “I didn’t have that pitch a couple of years ago. I have really worked on getting faster.”

Cole’s strength and endurance came in handy during the 16th Region Tournament when she delivered 422 pitches in three games, including a 12-inning marathon win against Boyd County, on her way to winning Most Valuable Player honors.

Lewis County coach Joe Hampton said the impact Cole has had has been immeasurable. During a four-game stretch when she was out with an injury, the Lady Lions were outscored, 48-8.

The team used that time to get better and it was a contributor to Lewis County’s deep postseason run that included its first region tournament title and a state semifinal appearance in Lexington.

“We got a lot better defensively during the time she was out,” Hampton said. “It’s the one card I tried to play with the team once we knew that she would be back. It was a time that we could be better. We can work on our defense. We continue to work as hard as we can. We weren’t used coming back from 4-0, 5-0. Teams came out and were hitting us in the mouth early. We had a hard time responding. We put pressure on ourselves.”

After the Lady Lions’ historic season, Cole and Hampton were named The Daily Independent’s Pitcher and Coach of the Year.

“It is really a great honor,” Hampton said. “There are so many great coaches in this region and the 15th Region as well. I am very humbled by it. This award is for everybody on our staff. We were a great combination. Our staff had different strengths in different areas. We worked extremely well together. I’m not standing here without them and we wouldn’t be as successful in the postseason without them. I enjoyed it more than I thought I would. … The enjoyment I had exceeded my expectations.”

Cole said she will never forget playing at John Cropp Stadium. It’s only increased her desire to return next year. Lewis County only lost one senior who saw significant playing time.

“I think it was a great experience for everybody,” Cole said. “That is a once-in-a-lifetime experience to play on Kentucky’s field. I believe we will carry that momentum and energy into the start of the season next year.

“I feel like we have been on the biggest stages, so we know what to prepare for. We also have talented young players that will come up and help out next year.”

Raceland’s Chloe Collins has been a solid run-producer during her career. The senior batted .458 this season. She blasted 18 home runs, third-best in the state, and collected 58 RBIs.

Collins was selected Position Player of the Year. The Lady Rams fell short of their ultimate goal but Collins said she cherished every moment she wore the Raceland jersey, especially with her six other senior teammates.

“It was a little unfulfilling, possibly even disappointing,” Collins said. “It will never change how grateful I am to be a Raceland Lady Ram. We had goals this year and we fell a little short of them.”

“I wouldn’t trade it for the world,” she added. “I didn’t start playing softball until I was a sixth-grader in Little League. I was terrible. I sat the bench the whole time and ate nachos while I cheered for everybody else. (Coach) Robbie (West) took me under his wing. He made me realize that I could be pretty good at it.”

Collins had to adjust to a new role midway through the season. West shifted the slugger to the leadoff position during the state All “A” Classic in Owensboro. The skipper wanted Collins to see more quality pitches at the top of the lineup.

“I started approaching at-bats a little different,” Collins said. “The leadoff position was very new to me. I never hit from leadoff my entire life. I had to learn to be a little more patient, which was something I wasn’t the best at. I want to lead by example. My pitch selection got better (in that role).”

Cole joins teammates Kayla Sullivan and Sarah Paige Weddington on the All-Area club after Lewis County’s 23-9 season. Sullivan was clutch from her leadoff spot in the lineup. She led the team with a .444 average. The sophomore totaled 13 doubles and drove in 24 runs.

Weddington was a solid defender and amassed 33 hits at the plate.

“I have played with them since I was little,” Cole said of her teammates. “It really boosts my confidence. I love them and spend a lot of time with them. They always have my back on the field.”

Raceland led the way with four members on the All-Area team. Kierston Smith proved to be a pivotal player for the Lady Rams in the middle of the lineup. The shortstop batted .408 with 12 home runs and drove in 48 RBIs.

Raegan West occupied the circle for the majority of innings during the Lady Rams’ run to a 25-9 record and a semifinal appearance in the state All “A” Classic.  The senior also recorded a .400 batting average as she focused on improving her hitting in her final season.

Cam Davidson came back from injury during the season, but was efficient at the plate and in the circle. She had 37 hits in 76 at-bats.

Lauren Spears led a trio of Kittens on the team. Spears (.471, 10 home runs) provided leadership behind the plate as Ashland made consecutive appearances in the 16th Region final.

Kenzi Robinson was 13-5 in the circle and displayed an impressive 1.94 ERA. Kendall Hillard hit over .300, hit four dingers and drove in 29 runs.

Boyd County also placed three players on the All-Area squad. Eighth-grader Jaycie Goad and sophomore Sara Bays were RBI machines for the Lady Lions. The duo drove in a combined 103 runs and each player hit nine home runs and 14 doubles. Goad hit .475 and accumulated 56 hits. Bays posted a .442 average and won 12 games in the circle while striking out 100 opposing hitters.

Senior Emma Borders provided a steady glove in the outfield and was one of five Boyd County batters to hit over .400.

Kirsten Vice tallied 27 wins in the circle and 210 punchouts.

Johnson Central spent most of the season in the KSCA Top 20 rankings with help from the strong play of Randi Delong and pitcher Chloe Vanhoose.

Delong was second in the state with 19 home runs. Vanhoose won 16 games in the circle and tallied 243 strikeouts.

Greenup County was represented by a pair of Lady Musketeers. Kaylie Lawrence was solid in the circle all season. She touted a 15-6 record with a 3.74 ERA. Ellee Hunt batted .421 and hit three homers. Lawrence matched her teammate in batting average and home runs.

The Daily Independent sports staff selected the Pitcher, Position and Coach of the Year. The All-Area team was comprised by coaches’ vote.

POSITION PLAYER OF THE YEAR

PITCHER OF THE YEAR

UMPIRE OF THE YEAR