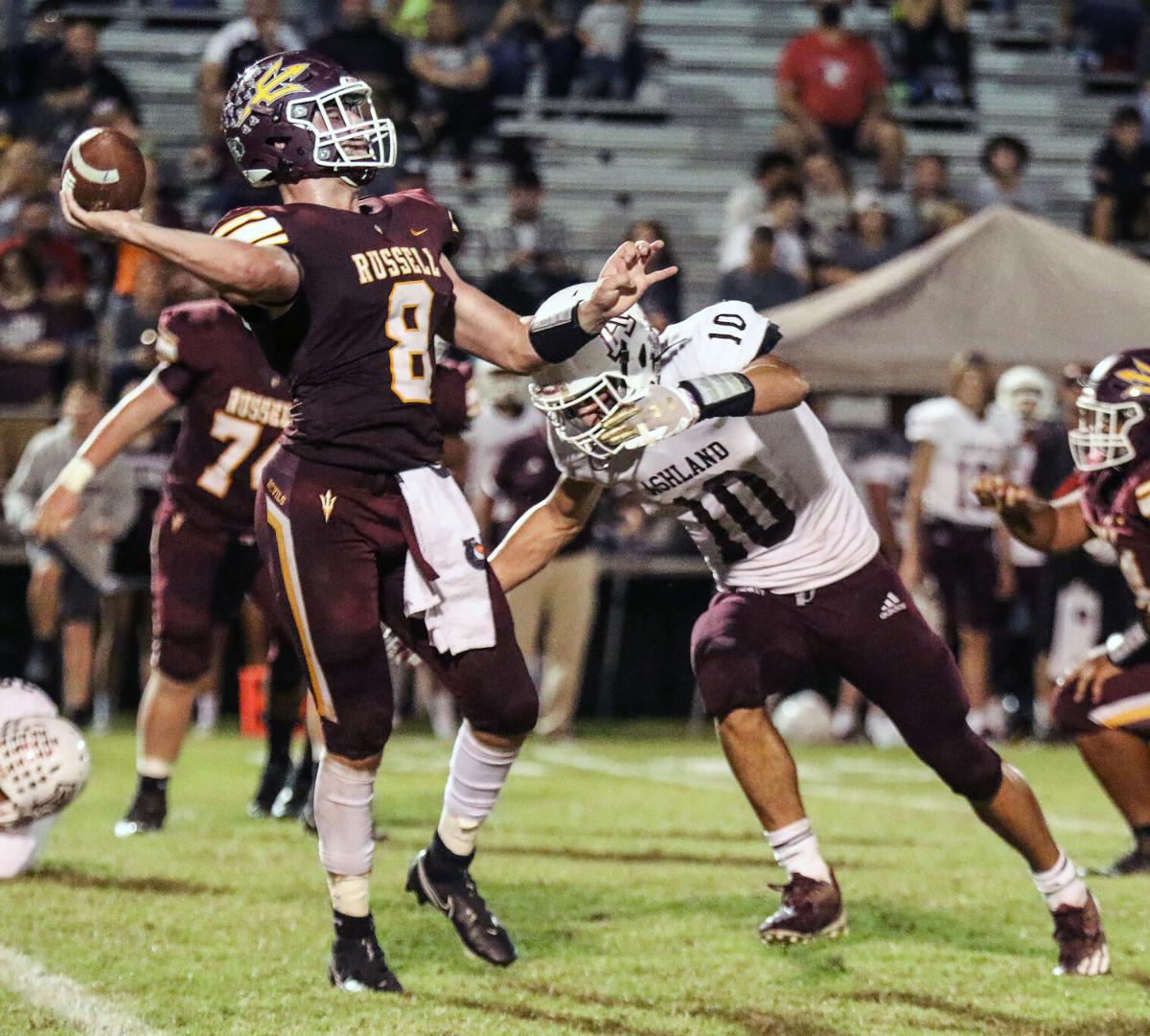 Russell’s Bradley Rose gets rid of the ball before Ashland’s Ricky Padron gets a sack on him. MATT JONES | THE DAILY INDEPENDENT 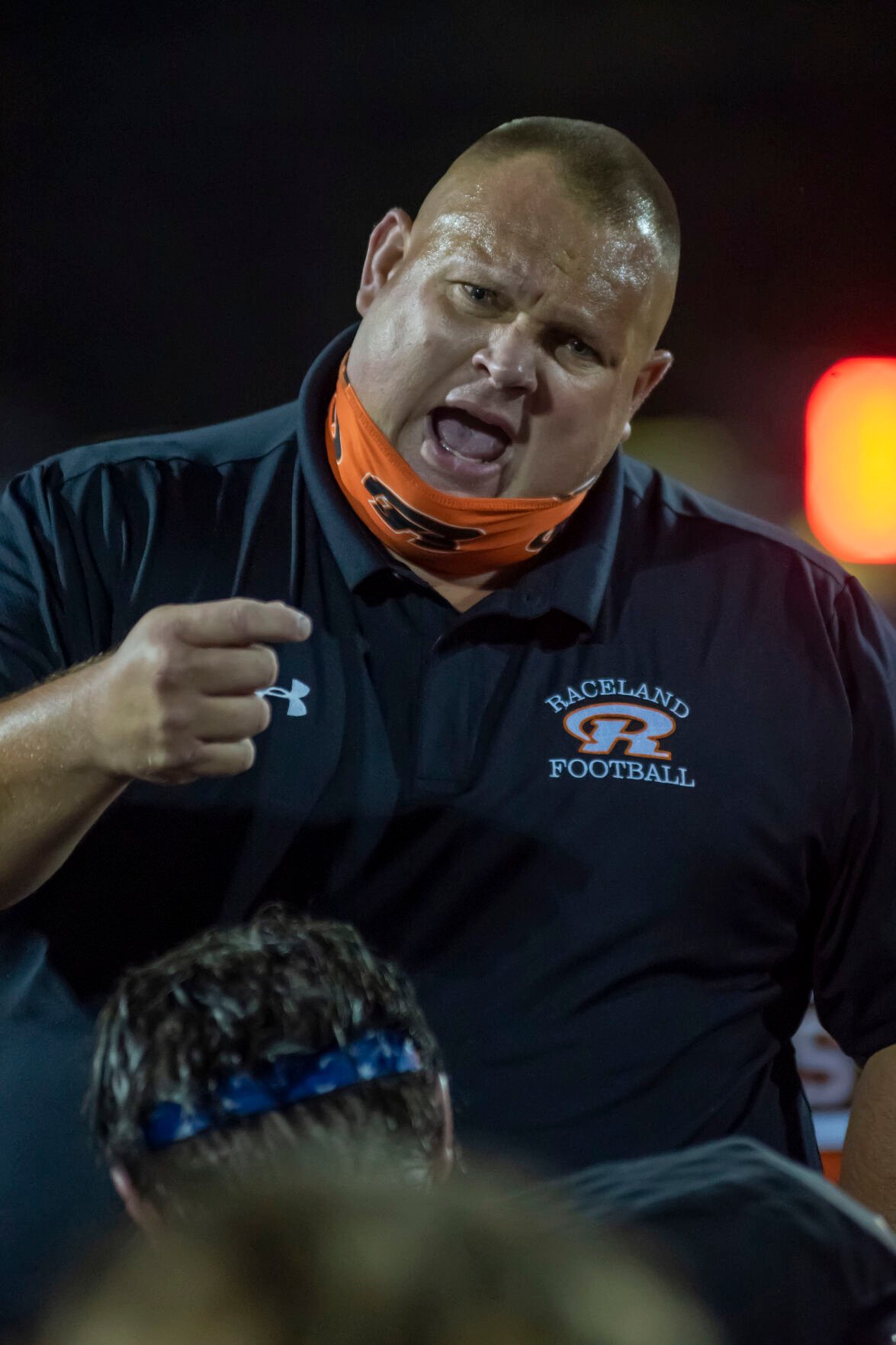 Raceland coach Michael Salmons talks with this team after their victory over Paintsville Friday night.

Russell’s Bradley Rose gets rid of the ball before Ashland’s Ricky Padron gets a sack on him. MATT JONES | THE DAILY INDEPENDENT

Raceland coach Michael Salmons talks with this team after their victory over Paintsville Friday night.

CANNONSBURG Raceland’s 2020 football season wasn’t as bad as it looked upon closer examination of the Rams’ schedule, who they beat and who beat them. But a 4-6 finish and second-round playoff loss was still far from fulfilling in a community that has gotten a taste for having a say in who represents Class A at Kroger Field.

As such, 2021 was more to Raceland’s liking, with a 12-2 mark and the Rams’ fifth trip to the Class A state semifinals in nine seasons.

So what, if anything, did Michael Salmons do differently from one year to the next?

Raceland’s coach paused to consider the question, then, using his setting as an illustration, said the Rams’ 2021 success was less due to strategic change than persistent adherence to a plan.

“At the end of the day, our guys bought into our process. That’s how you get recognition on days like today,” Salmons said after the All-Area photo shoot at Boyd County. “You don’t start the season and say, ‘I hope that we get 10 guys All-Area.’ That’s backwards.

“You try to get better today, and as you stack up successful days, then accolades come.”

The Rams followed that philosophy to the state’s final four, and it earned Salmons The Daily Independent All-Area Small School Football Coach of the Year honors for the third time.

Salmons’s Rams knocked off defending Class 3A state champion Ashland in the season opener before a loss in Week 2 to Russell.

Raceland won 11 straight games after that, with all but two of them out of reach well before the final horn, before coming up short against eventual state champ Pikeville in the state semis.

“I think our guys got fuel from coming up short in 2020, and that catapulted us through the offseason,” Salmons said.

An ethos of selflessness defined that run, Salmons said.

“It was about our guys doing what’s best for the name on the front of the jersey and not the name on the back,” Salmons said. “I think that was promoted by our best players, by our leaders, and at that point, it becomes infectious. Every team, every journey is different, so you gotta try to recreate that again moving forward.”

Bradley Rose’s 2021 journey was considerably different than the fall before. The Russell senior added quarterbacking duties to his established role as a defensive-line force.

“I think I definitely got more comfortable from playing last year, just being solely on defense, and then switching over, having to play both roles this year,” Rose said.

Rose set the Red Devils’ single-season passing yardage record as a first-year starting signal-caller by throwing for 1,784 yards. Rose and Russell coach TJ Maynard both conceded that would have seemed improbable in the preseason.

“He put a lot of time and work and effort into getting better as a football player, especially at the quarterback position,” Maynard said. “If you’d have told me at the beginning of the year that he’d have the type of year he did, I’d obviously have been grateful to have it, but we didn’t expect it out of him. That just goes to show you the type of kid he is and the type of work ethic he has to put himself and our team in that position.”

Or, as Rose succinctly put it when asked if he expected to finish his career atop that list: “Definitely not.”

That high-level production on both sides of the ball pushed Rose to the title of All-Area Player of the Year.

Rose is one of four players voted onto the team by area small-school coaches as a quarterback.

Lawrence County’s Alex Strickland threw for 690 yards, five touchdowns and two interceptions on 38-for-70 passing. He rushed for 531 yards and six scores and defensively added a pick-six and a fumble return to the house.

Wallace picked up 1,028 yards on 151 carries, with 14 TDs, one receiving touchdown, a pick-six, 84 tackles and four aerial thefts.

Bond finished his career as the leader among current 16th Region schools in receiving touchdowns, yards and catches. He made 37 catches for 821 yards and nine TDs as a senior and ran for two scores.

Gillispie caught three scoring passes and 381 yards’ worth of aerials. He ran for a score and recovered three fumbles.

Hughes made 38 receptions for 723 yards and 11 scores, ran for a TD and made 70 tackles and three interceptions.

Newman had 38 catches for 552 yards and four scores, took one of his three interceptions to the house and made 44 tackles.

Pinkley picked up 891 receiving yards on 46 catches for 11 TDs, ran for a score, took one punt and one kickoff to paydirt and made 25 tackles.

Taylor caught two TD passes and had 314 yards receiving, ran for eight touchdowns and made 30 tackles and three sacks.

Raceland’s Peyton Ison is the All-Area kicker. He hit on 52 of 64 extra points and made four of seven field goals.

Paintsville’s Grayson Peters was voted the all-purpose player. He had 248 receiving yards and three TDs and made 72 tackles.

Barker made 33 tackles, and Chicko recovered 66, including 15 for loss, and forced three fumbles, Coburn returned an interception for a score and made 75 tackles, eight for a loss, and six sacks. Cook owned 38 tackles, while Frye made 74 stops, 12.5 for a loss and eight sacks. Kirk collected 33 tackles.

Mitchell made 96 tackles, forced three fumbles and dropped 14 ballcarriers behind the line of scrimmage. Nauman had 44 tackles, and Taylor made 57 stops, recovered three fumbles, had five tackles for a loss and sacked 11 opposing QBs.

Conn made 108 tackles, nine for loss, and forced three fumbles. As the Panthers’ quarterback, he completed 112 of 188 passes for 1,678 yards, 23 touchdowns and five picks and ran for two TDs.

Davis made 103 tackles, 24 for loss, and ran for a score. Goodall returned a fumble to paydirt and made 136 tackles, six for a loss.

Heighton added 82 tackles, 12 for loss, and ran for four TDs.

Jones made 75 tackles, 12.5 behind the line, and caught three scoring passes.

Allen made 77 tackles and four picks, taking two back for touchdowns. He added five receiving TDs and 351 yards.

Collinsworth made 33 tackles, caught two scoring passes and returned a kickoff for a touchdown.

Harper had 46 tackles, a pick-six and three interceptions to go with 40 catches for 510 yards and two scores.

Johnson made 53 tackles, six for loss, and three interceptions, pairing with five receiving TDs and 298 yards.

McGlone made 63 tackles. He also finished second to Jackson Bond in career receptions by a current 16th Region player, hauling in 30 passes for 461 yards and six scores this season.

Pike made 14 tackles and two picks. Pollock pilfered two passes and had 47 tackles, seven for loss.

Russell’s Nathan Totten is the All-Area punter. He hit on 35 of 37 points-after and booted four of five field-goal tries.

Rose made the 11th Player of the Year claim by a Red Devil and the first since 2009. Salmons’s Coach of the Year tab is the 13th such honor for a Rams coach.

The All-Area team is selected by coaches’ voting. Player and Coach of the Year honors are determined by the newspaper’s sports department.

The large-school and small-school divisions underwent a format change from 2019 and ‘20.

In 2019, after KHSAA realignment changed the number of northeastern Kentucky schools in Classes 2A, 3A and 4A, the newspaper placed the area’s 16 football-playing schools into the customary two All-Area divisions using enrollment figures available on the KHSAA website — one division containing the largest eight schools and the other division housing the smallest eight.

For 2021, because that dividing line is in the midst of four area schools whose enrollment is separated by just 17 students, the sports department placed all four of them in the small-school division, in keeping with the spirit of the point of having two All-Area football divisions.