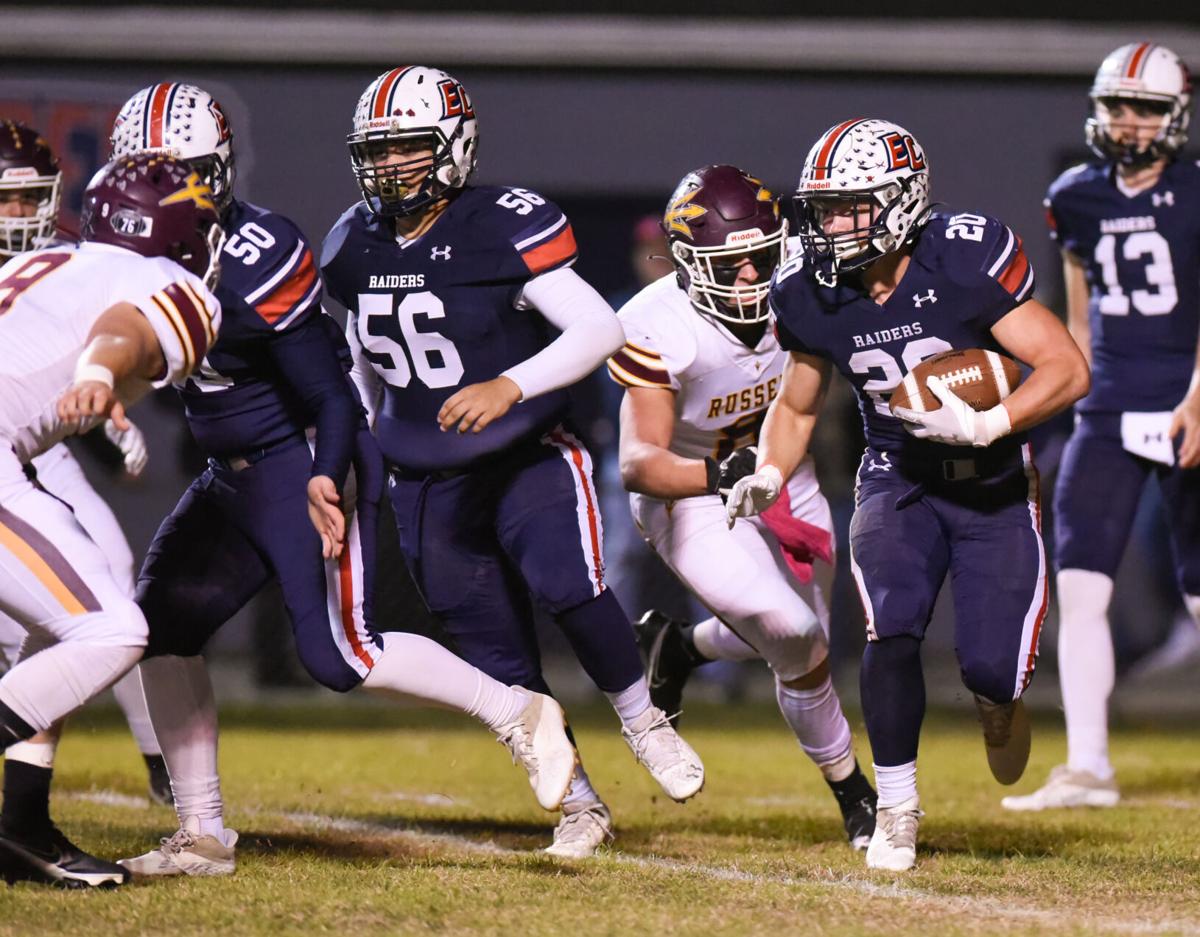 East Carter's Charlie Terry runs the ball against Russell on Friday night in Grayson. MARTY CONLEY | FOR THE DAILY INDEPENDENT

East Carter's Charlie Terry runs the ball against Russell on Friday night in Grayson. MARTY CONLEY | FOR THE DAILY INDEPENDENT

CANNONSBURG History makers don’t have time to relish the moment while they are adding a new chapter to their program’s legacy.

East Carter won 11 games for just the second time in school history in 2021. The Raiders have only reached the double-digit plateau twice, the first coming in 1989.

East Carter running back Charlie Terry has had time to put the gridiron success into perspective.

“It was pretty amazing after what we were able to do this year,” Terry said. “We made history. The hard work that we have put in this season has really paid off. I love all these guys and I will miss playing with them.”

“We are now at the point where we can sit back and enjoy it,” Raiders coach Tim Champlin added. “I think about what this team has accomplished. It’s been really fun and an enjoyable ride. We have great players and great coaches. It was great to experience that with them.”

Steve Womack Field kept buzzing during the month of November as the Raiders played four straight postseason games on their home turf. East Carter claimed a district title for first time in 38 years and added more hardware a week later with the program’s first region championship.

“You have to run the football at any level,” Champlin said. “It’s something that we’ve really leaned on. We have found something that fit our kids and the type of kid we will continually have in our program.

“All of our coaches bought in to that philosophy and learned as much as we could to teach our kids,” he continued. “Our coaches have done a phenomenal job. We’ve had great players that come in and work hard and do everything that you ask of them.”

The Raiders flourished in the ground game behind the hard-nosed running of Terry. The senior posted 1,959 rushing yards and scored 35 touchdowns. He led Class 3A in end-zone trips and was second to Belfry’s Isaac Dixon in yardage.

Terry and Champlin were named The Daily Independent’s Large School All-Area Player and Coach of the Year, respectively, by the newspaper’s sports staff.

Terry gave the credit to his teammates up front.

“I was able to get more touches this year,” Terry said after the All-Area photo shoot at Boyd County. “I started getting more carries at the end of last season and I was able to show the coaches what I could do. Our offensive line really has improved this year. It was probably the biggest key to our success and my success running the ball this season.”

Terry was joined on the team by teammates Connor Goodman (wide receiver), who caught 41 balls for 751 yards and four touchdowns, and Mikey Holbrook and Bryson Kiser (offensive linemen).

“He’s a kid that I have enjoyed having around the program,” Champlin said. “He knows when to have fun and knows when to be serious. He’s not a guy that will yell and scream. He is a guy that is just going to work hard. During baseball season, he was dragging kids to the weight room. He made sure the entire team is getting better. He wants to be great, but more importantly. he wants the whole team to be great.”

Terry said the Raiders were motivated after an early-season loss to rival West Carter. East Carter won eight of its next nine games, averaging 36 points every Friday night during the stretch.

The ride culminated with eight-time state champion Belfry playing in Grayson in the state semifinals. Fans filled the Raiders’ home field. They even camped out on the hillside next to the school.

The night showed the payoff for the program’s perseverance.

“It was the best atmosphere I have ever seen,” he added about the state semifinal game. “We scored first in that game and the crowd was going crazy. Our fans showed up all year long and really supported us. We are really grateful for that.”

Freshman Zack McCoart tallied 1,287 rushing yards and fullback Chase Price added 834. Matt Crum was named to the team as an all-purpose player with 806 yards on the ground. The trio combined for 42 touchdowns.

Vinincio Palladino brought physicality to the Tomcats’ backfield. He collected 1,193 yards and 15 TDs. Rowan County’s Cole Wallace returned for another senior season and racked up 1,795 yards and found the end zone 17 times.

Jones and Ratliff each contributed 45 tackles and the duo sacked the quarterback a total of 11 times.

May totaled 74 total tackles—20.5 for loss—and added 15.5 sacks. Sammons had seven of his 42 tackles result in a loss for Musketeer opponents.

Rowan County placed two linebackers on the All-Area team. Rocky Miller led the Vikings in tackles with 118. Arian Brown added 105. They combined for 24.5 tackles for loss.

Ashland’s Isaiah Ingram and Boyd County’s Dakota Thompson made the team at the linebacker position. Ingram was the top Tomcat tackler with 83. He also recorded three sacks. Thompson guided the Lions defense with 56 tackles and three interceptions.

Ashland’s SJ Lycans was selected All-Area kicker after a near-perfect performance this season. He made all of his 38 PAT attempts and split the uprights on five of his six field goal tries.

Rowan County’s Chase Alderman split his time between the pitch and the gridiron. He was voted onto the team as a punter.

The All-Area team was comprised by coaches’ vote.