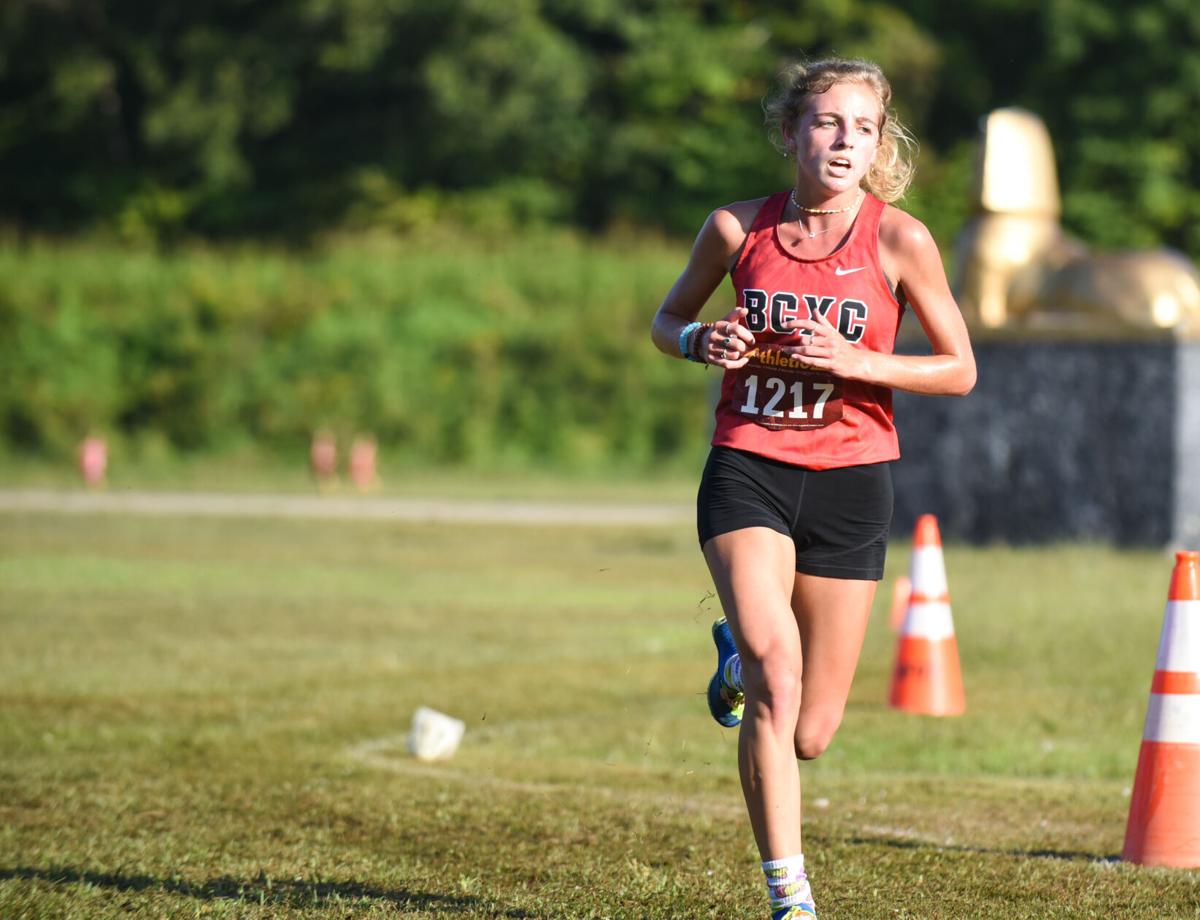 CANNONSBURG Of course Sophia Newsome longed for individual cross country glory — what distance runner wouldn’t? — and she found it in the form of the Class 2A state championship in October.

Perhaps more meaningful is what Newsome and her fellow Lions brought to Boyd County: a girls cross country team on par with the school’s elite boys unit.

“It’s kinda crazy,” Newsome said. “No one really knew who Boyd County was, and then over the years the guys placed runner-up two years in a row (at State in 2018-19) and then we placed third (as the girls program in 2021), and everywhere we go now, it’s like, ‘That’s Boyd County, that’s Boyd County.’

“You walk around with pride with a Boyd County sweatshirt on now, and that’s something that’s a great accomplishment.”

Newsome and Boyd County coach Becca Chaney repeated as The Daily Independent All-Area Runner and Coach of the Year, respectively, having done their part to foster what’s currently the top cross country program in eastern Kentucky.

“It just makes me so proud for these kids, because they’re the ones putting in the hard work,” Chaney said. “They’re the ones doing all the crazy stuff I tell them to do.

“When we get down to Lexington, and even when we would travel to Louisville, (opponents) knew who we were. They’re like, ‘Yeah, that’s Boyd,’ and you could hear them. And that just makes me so proud for them. All that hard work they do, they deserve that respect and that recognition.”

The Lions boys have received it for years, but Boyd County’s girls could be forgiven for having felt overshadowed during that stretch.

A third-place team finish in the state meet at Bourbon County and two top-five individual finishes — Govey was fifth to go along with Newsome’s title — has helped sate the Lions.

“Those girls have been on fire the past two or three years, and they’ve had this fire in their bellies they were gonna do something,” Chaney said. “Our program is now equally as strong in the females as it was in the males, and that’s where I think these kids put themselves on the map in the state, is that the whole program is just as successful with each gender.”

Newsome led the way by winning the 11th girls individual state title claimed by a northeastern Kentucky runner. Paula Kelly earned Boyd County’s only other such crown in 1987.

Newsome didn’t fare particularly well in a preview of the state course in Paris in late September, Chaney said, so the Lions went back to the drawing board to prepare for a higher-stakes race.

“We mapped out a whole game plan, and the reason why she won is because she did that game plan down to a T,” Chaney said. “Where she left the girls is where we told her to on that course. She just flat-out did it.”

That allowed Newsome to finish an individual career that has fueled a team rise with a state title.

But, as a Boyd County track and field T-shirt read a few years ago, the finish line was just the beginning. Though the Lions graduate Newsome, Sworski leads a junior class with depth and Govey and Kazee are eighth-graders, so Boyd County believes it’s built to last.

“Look where they’re at now,” Newsome said of the Lions’ younger runners. “I can only dream and hope for them what they can accomplish the next four years. They’re built different. They’re one of a kind.”

Newsome is a fifth-time All-Area pick. She won the Class 2A, Region 6 and Area 7 title races, in addition to the Kentucky/Ohio Valley Cross Country and Track Conference and the Eastern Kentucky Conference championship events.

Chaney picked up at least her ninth girls Coach of the Year nod (All-Area online information dates back to 2006).

“Man, her workouts,” Newsome said with a wide grin. “It’s her workouts and her overall charisma. There’s no negativity that ever happens. It’s always positive coaching.

“We all knew we could get there, it was just, how are we gonna do it? And Becca’s coaching and all the coaching staff and all the girls coming together and making game plans all the time, everything just fell into place.”

East Carter’s Riley Brown and West Carter’s Elizabeth Middleton were each selected for their sixth All-Area team. Brown finished ninth in the Class 2A, Region 6 meet, 28th at State, third in both the Area 7 and EKC competitions and fourth at the KOVCCT.

Middleton was sixth in the Class A, Region 7 meet and 63rd at State.

Ashland’s Aubree Hay tallied her fifth All-Area nod. She was seventh in the region, 34th at State, eighth in the KOVCCT and seventh at Area 7.

Autumn Egleston of Rowan County is a fourth-time pick. She came in fourth in the region, 12th at State and sixth in the Area 7 meet.

East Carter’s Ryann Brown made her third All-Area team. She was 23rd in the region meet, 13th at the KOVCCT, ninth in the EKC and 17th at Area 7.

Raegan Osborn of Russell qualified for her second All-Area honor. She came in 11th in the region, 37th at State, sixth in the KOVCCT and 10th in the Area 7 event.

Mabior came in second in the region and eighth at the EKC. McSorley was 13th in the region, 11th in Area 7 and 41st at State.

Moore placed 12th in the region and 20th at State.

The All-Area team is composed of coaches’ votes. The newspaper’s sports department determines Runner and Coach of the Year recognition.

RUNNER OF THE YEAR