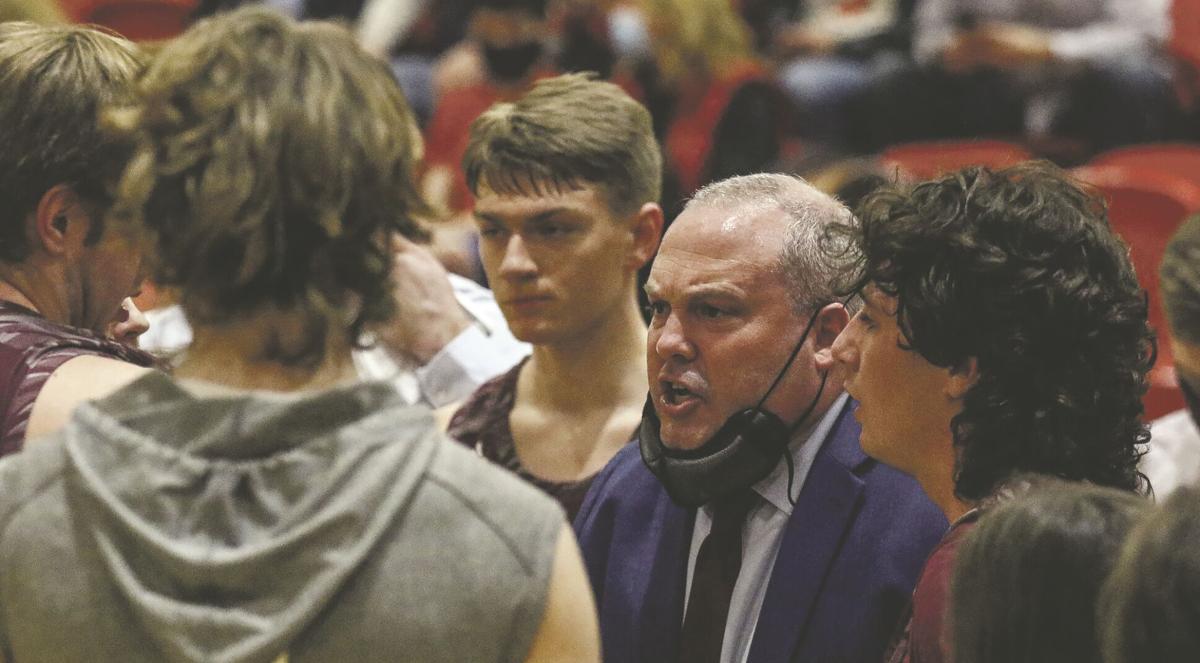 Ashland’s Cole Villers, center, listens as coach Jason Mays talks to his team during a timeout in the 64th District Tournament championship game on March 18. Villers and Mays were named The Daily Independent’s All-Area Player and Coach of the Year. 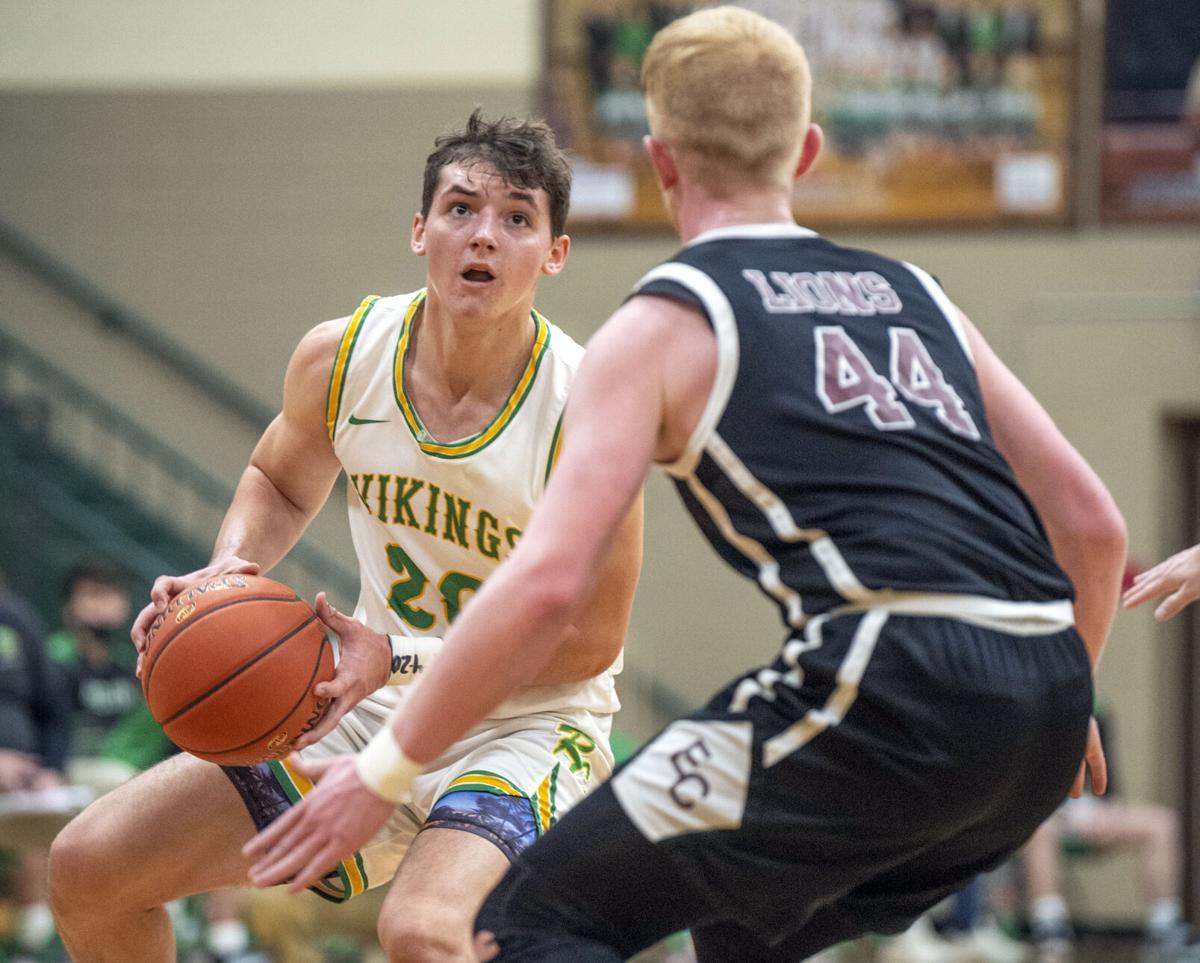 Ashland’s Cole Villers, center, listens as coach Jason Mays talks to his team during a timeout in the 64th District Tournament championship game on March 18. Villers and Mays were named The Daily Independent’s All-Area Player and Coach of the Year.

ASHLAND It didn’t take Ashland long to learn its 2021 boys basketball season wouldn’t end unblemished like the one before it did.

Instead, something better was in store.

“We didn’t want the loss, but we needed that loss because we had an ego about us that we were better than we were,” Villers said. “And to go down there and lose to a great team — because (Highlands) obviously ended up winning (the state title) — it was just really humbling. ... That game was the biggest game of the year, honestly.”

Followed by several more like it. Ashland took down all comers in northeastern Kentucky, punctuated by rallies in the fourth quarter from the figurative dead in the 16th Region Tournament semifinals and title game, to reach the Rupp Arena stage to which COVID-19 had denied the Tomcats entry a year before.

There Ashland won its first two games by 28 and 36 points before again running into the Bluebirds in the state semifinals. A battered Tomcats club bowed out there, 66-50, but not before making the drama and heartbreak of the previous 12 months worth it.

“Every kid wants to win a state championship,” Mays said, “but if you would have told our kids on March 13 last year, ‘Your season is done this year, and then next year, you’re gonna play the toughest schedule in the state and you’re gonna be playing on Saturday morning in Rupp Arena’ — knowing our kids they would have first been like, ‘Why just Saturday morning?’ — I think they would come to a quick realization that, wow, that’s gonna be another great year.”

Villers, sophomore point guard Colin Porter and junior guard Ethan Sellars played pivotal parts in making it so. Villers averaged 22.7 points and 5.1 rebounds per game entering the Sweet Sixteen, knocking down 54.8% of his field goals, 43.1% of his 3-pointers and 84.7% of his free throws.

But Villers didn’t accrue any of those statistics on one of the plays that most significantly showcased his growth, Mays said — the final possession of regulation against West Carter in the region tournament semifinals.

The Comets led by three points with 10 seconds to play. Having been burned by Villers’s 60-foot game-winning buzzer-beater last year, and again by 28 points that night to that point, West Carter had no intention of letting him have anything resembling a clean look to tie it.

Porter instead got loose from the right wing and drained a triple to force overtime. Ashland went on to win, 76-69.

Villers becomes the third member of his generation of his family to garner multiple All-Area honors, joining older brothers Christian (2015-16) and Chase (2017-18). He is the first Tomcat to be named Player of the Year since Chase shared that distinction in 2018.

Villers, who holds an offer from Morehead State and has been contacted by Lipscomb and Eastern Kentucky, did it despite spending most of the season banged up. He had shoulder trouble all year, he said, and by the state tournament his hip had gotten so bad he wasn’t sure if he could run.

As of April 28, Villers still hadn’t so much as jumped since the state semifinals, he said. Three-times-a-week therapy, a cortisone shot and an X-ray to rule out a broken femur have all been part of the recovery process.

Against that backdrop, Villers dropped in 35 points against West Carter in the region semifinals, canned three 3-pointers in the fourth quarter to bring Ashland back from the brink in the region final against Rowan County and netted 20 points against Boyle County in the state quarterfinals.

“I think Cole has a deep desire to be relied upon by his teammates,” Mays said, “and that is one of the most important roles that he sees in his life, is being a great teammate. That’s what great teammates do. They find a way to perform, regardless of their circumstances.”

Porter racked up 17.8 points and 4.2 rebounds per outing, in addition to being Ashland’s facilitator and a defensive pest. Sellars collected 13.5 points and 2.0 rebounds a game, converting 43.1% of his 3s.

Mays nets his third Coach of the Year honor in as many tries. He is the third coach to gain that notice three years in a row this millennium, joining Ashland’s Mike Flynn (2001-03) and Elliott County’s Greg Adkins (2015-17).

Asked what that meant to him, Mays laughed and responded by spelling out, “P-l-a-y-e-r-s. I don’t know how to dress that up any more.”

He added, though, that coaching this year, given the challenges the pandemic presented, required a different approach than normal to get Ashland right.

“What we had to do this year is manage expectations and almost really work more as a shrink than an X-and-O guy,” Mays said. “The teams that didn’t evolve weren’t playing in the Sweet Sixteen. There were very talented teams that weren’t on that floor because they were the same team the 15th of March as they were the 15th of January. So I was really proud of how our guys bought into change and tabling some things offensively in order to do (something else). That speaks to the maturity of them.”

Mays’s accolade in triplicate means more because of the quality of coaching in northeastern Kentucky, which Mays conceded has pleasantly surprised him — simply because college coaches, the arena he worked in for his entire time in the profession until moving to Ashland in 2018, don’t recognize the different set of parameters high school coaches encounter.

Mason Moore further proved that by being named to the commonwealth’s roster for the Kentucky-Indiana All-Star Series. Rowan County’s senior moved to point guard and still put up 19.7 ppg and 10.5 rpg, made 54.2% of his shots, was selected the Kentucky Association of Basketball Coaches 16th Region Player of the Year (open to seniors only) and becomes the first four-time All-Area player since Morgan County’s Jordan Perry did it from 2013-16.

Junior Chase Alderman chipped in 9.1 ppg and 7.9 rpg, made 52.1% of his floor shots and was chosen the Eastern Kentucky Conference’s Defensive Player of the Year for the Vikings, who went 15-4. Three of those losses came to eventual state semifinalists, including a pair of overtime setbacks against Ashland.

Senior guard Tyson Webb represents the Comets on the All-Area team. The EKC Offensive Player of the Year pitched in 15.2 ppg and 3.8 rpg.

Johnson Central’s Isaiah May and Raceland’s Kirk Pence each earn their third All-Area tab. May, the KABC 15th Region Player of the Year, produced 16.3 ppg and 4.3 rpg as a senior for the Golden Eagles, who finished as region tournament finalists.

Pence, runner-up for KABC 16th Region Player of the Year honors, netted 24.8 ppg and 7.5 rpg and made 53.8% of his field goals and 86.3% of his charity tosses. The senior guard became the Rams’ all-time leading scorer, eclipsing a mark that had stood for 38 years.

Paintsville returned to the Sweet Sixteen after a 12-year absence, and Colby Fugate got back on the All-Area team after a year’s hiatus. The junior collected 21.0 ppg and 5.6 rpg.