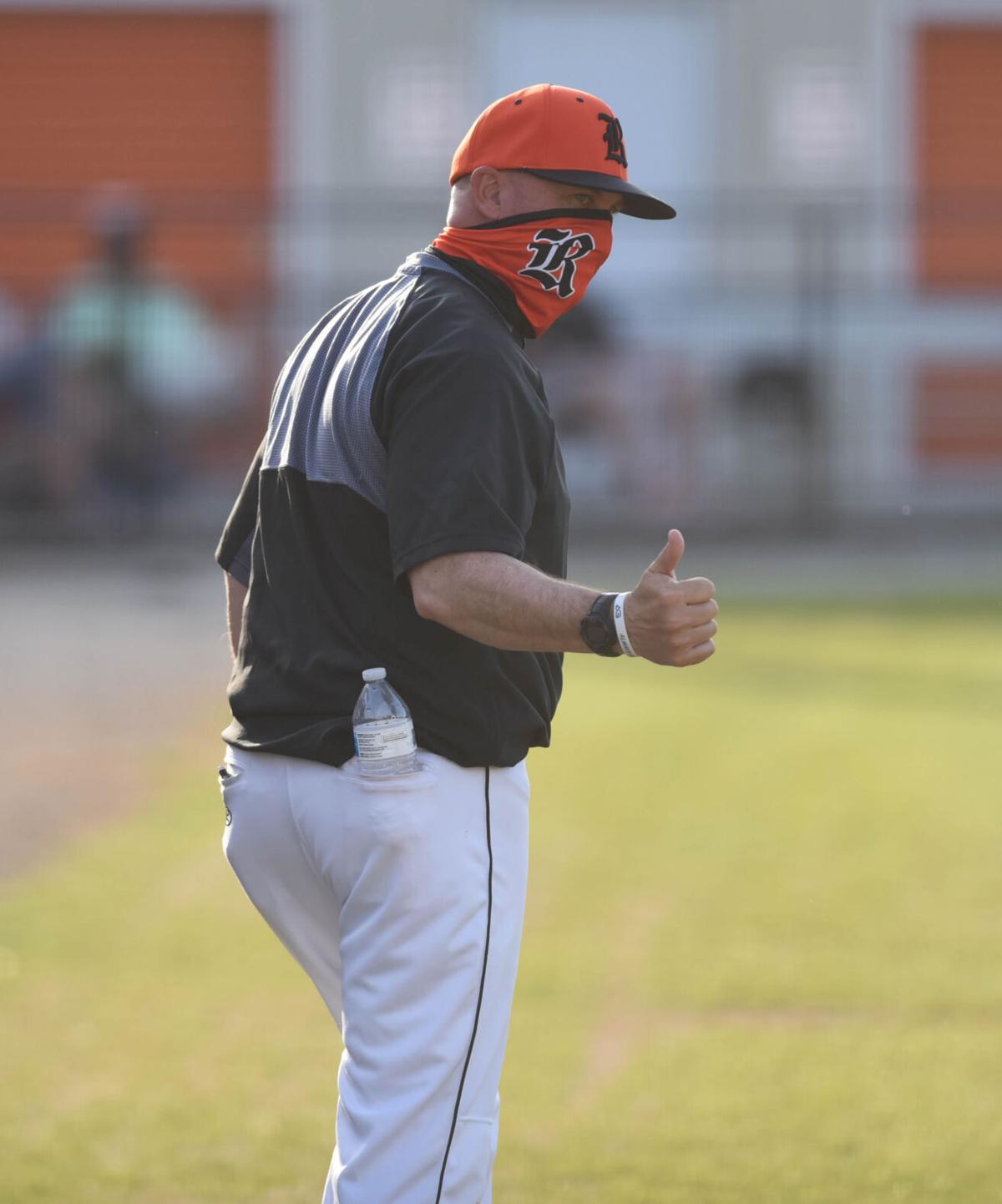 Raceland coach Marty Mills gives a thumbs up to his team against Boyd County on April 6. Mills was named the 2021  All-Area Coach of the Year. 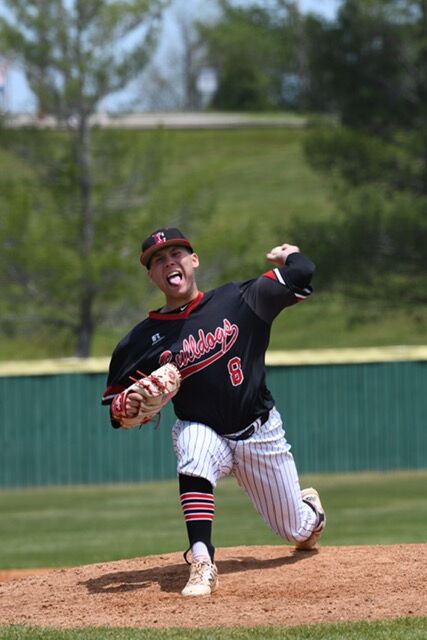 Lawrence County’s Bryce Blevins sends a pitch to the plate against Boyd County on May 15. The junior posted a 0.30 ERA and batted .500 on his way to All-Area Player of the Year.

Raceland coach Marty Mills gives a thumbs up to his team against Boyd County on April 6. Mills was named the 2021  All-Area Coach of the Year.

Lawrence County’s Bryce Blevins sends a pitch to the plate against Boyd County on May 15. The junior posted a 0.30 ERA and batted .500 on his way to All-Area Player of the Year.

GRAYSON Raceland and Lawrence County both expected to have baseball teams in 2020 that, at the very least, rivaled their best ever.

COVID-19 prevented them from finding out for certain. So the personnel still in Louisa and Raceland had to make their statement in 2021.

The Rams did so by winning the 16th Region Tournament for the first time in 30 years. They had one of the region’s top 1-2 pitching punches in seniors Kirk Pence and Jake Heighton, who doubled as one of the best catchers around. But behind them was a largely inexperienced group.

Marty Mills was comfortable with that, considering his mandate since taking over as Raceland’s skipper in 2017.

“We’ve been trying to build,” Mills said after the All-Area photo shoot at the Grayson Sports Park. “Last year was kinda deflated, just like a lot of America and the world. We figured that may have been one of the best teams in the history of the school, and for these guys to just pick that up with very little experience, it was amazing, really. It was a testament to how hard they worked and what they’ve been doing.”

It also required someone putting the pieces together — which garnered Mills The Daily Independent Keith Prater Memorial All-Area Coach of the Year honors.

They showed it by going 31-8, rebounding from a setback to Greenup County in the 63rd District Tournament final by outscoring their three region tournament opponents 39-1 to claim that hardware for the first time since 1990.

“They were just locked in all year, the offseason, in-season, postseason,” Mills said. “We’re a pretty close-knit community, and I think people understand that, but they also felt a responsibility in a lot of ways too. All that just kinda came together.”

The Rams were both the most prolific offense in the 16th Region and the stingiest defense, conceding the fewest runs by nearly 30.

Pence, Heighton and junior Jake Holtzapfel did their part on both sides of the ball to contribute to both of those distinctions. All drew All-Area recognition from northeastern Kentucky coaches.

“We’ve been fortunate to set home-run records, and we do a lot of small-ball stuff,” Mills said. “It’s just a combination of things. Bottom line is, we’re just trying to score runs, and our guys have really bought into, baseball for us is a team game. ... I think our run differential this year shows what kind of teammates our guys are and what kind of team they’ve developed into.”

Meanwhile, in Louisa, Lawrence County had a strong season at 29-7 that came up just shy of its aim, with a loss to Johnson Central in the 15th Region Tournament final.

Bryce Blevins was one of several Bulldogs that couldn’t have hoped for much better numbers.

The junior lefty ace, who’s committed to Kentucky, posted a 0.30 ERA, allowing two earned runs and 20 hits in 47 innings. His strikeout-to-walk ratio was so mind-boggling — 91 to 1 — that Lawrence County coach Travis Feltner clarified in his All-Area nomination email, “Those are not misprints.”

The veteran coach went on to call Blevins’s campaign the “most dominant season I’ve ever seen a guy have,” which carries some cachet considering Feltner had a front-row seat to eventual major leaguer Chandler Shepherd and professional pitcher Steve Blevins.

“Throughout my entire career, and even before when I was a little kid, being around my uncle and knowing what kind of tradition he carried through, that culture of being in that program, it set the tone for me,” Bryce Blevins said, “being in that family and having the last name of Blevins.”

Blevins backed it up on the mound and also hit .500, driving in 27 runs. His overall line was good enough to add the tag of All-Area Player of the Year.

The one single walk Blevins issued — to Raceland on May 22 — indicated a lifelong focus on hitting his spots, he said.

“Ever since I was a little kid, I’d be in my backyard throwing with my dad, my uncle or my grandpa,” Blevins said. “We always focused on, every throw I made had to be right in the middle of that chest. It wasn’t always about how hard you could throw, because that all comes along with being able to throw strikes first. Being able to throw strikes is what gets guys out, especially at the high school level.

“I always thank God for the talent he’s given me each and every day. Without my parents throwing with me in that backyard, and my uncle, I wouldn’t be able to do the things I do on the mound.”

Blevins also carries a hefty — and, in his words, healthy — confidence.

“Baseball to me, as a player, as an individual, you’ve gotta have a mentality every time you step on that field that you’re the best one out there,” he said. “And not in the wrong way, but I believe every time I’m out on that field, I’m better than everyone else, especially on the mound. If you have that confidence level every time, whether you’re at the plate or fielding a ground ball or pitching, nine times out of 10 you’re gonna be the better player than whoever you’re facing.”

Junior Blue Fletcher joins Blevins on the All-Area team from Lawrence County. He hit .392, scored 48 runs and drove in 19 as the Bulldogs’ leadoff hitter. He also posted a 2.19 ERA and was Lawrence County’s primary catcher.

Boyd County, which was 64th District Tournament champion for the fourth straight time, tied Raceland for the most All-Area picks with three.

Fleming County senior Buddy Morgan was a posthumous selection. Morgan hit .379, swiped 26 bases in 28 attempts and scored 26 runs. He died May 28 from injuries sustained in an automobile accident 13 days earlier in which his brother Hoss was also involved. Buddy Morgan, 18, passed away one day shy of his graduation.

Heighton was selected to his third All-Area team. Callahan and Moore were also repeat picks. Smith and Tomolonis were the first freshmen to make the team since Heighton in 2018.