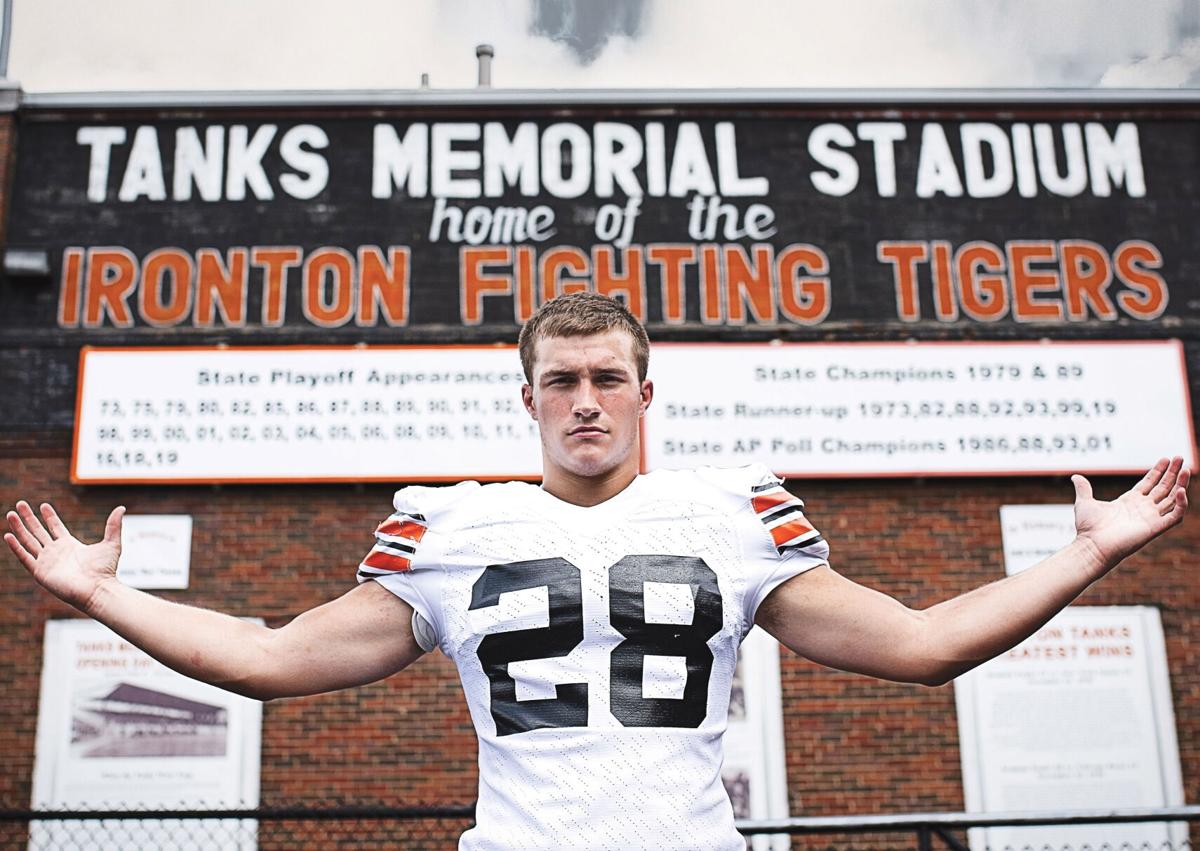 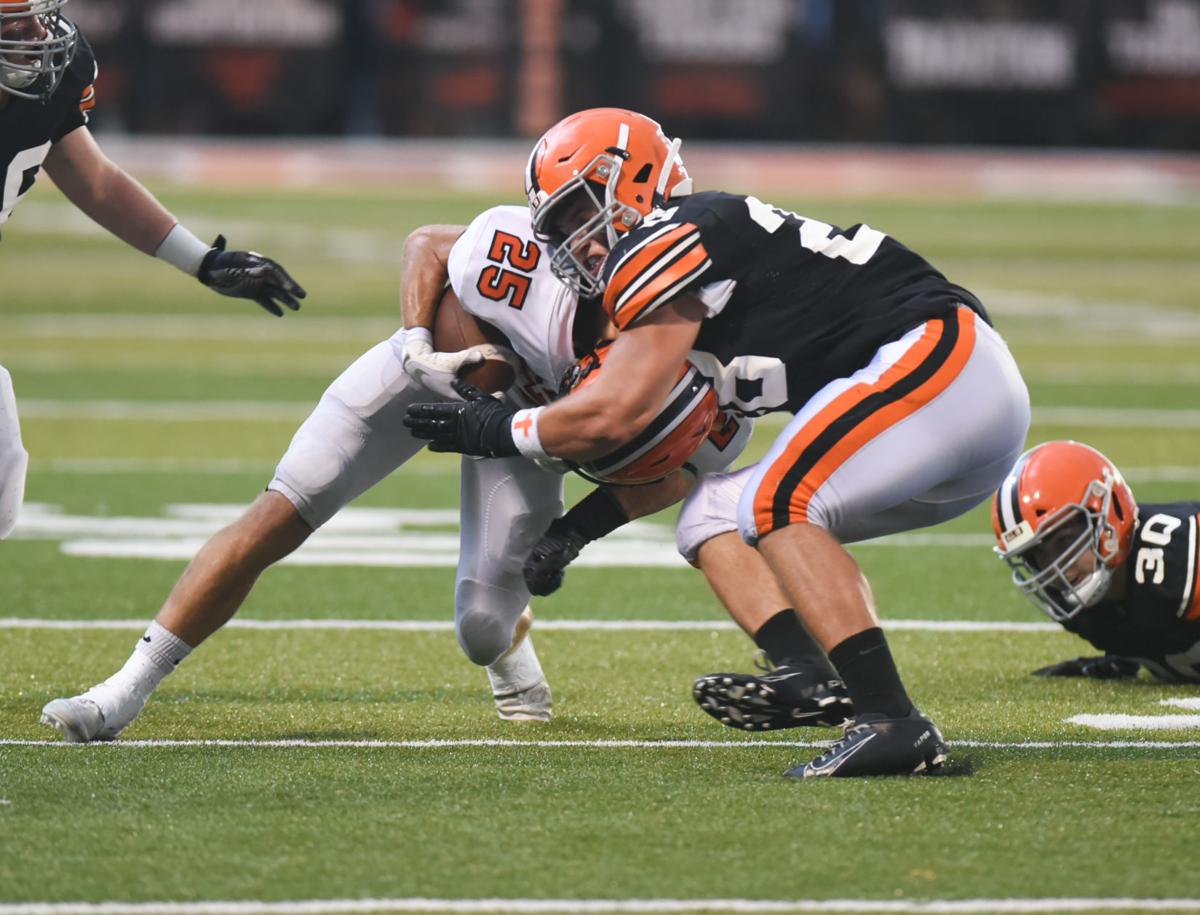 The Fighting Tigers have unfinished business in 2020 and it’s still a driving force for Carrico eight months later.

The Ohio State commit has a future playing on Saturdays in front of tens of thousands of people. Before he makes the trip to Columbus, he and the Fighting Tigers hope to travel 128 miles farther north to Canton and achieve something Ironton hasn’t claimed in 31 seasons.

“I am confident that we had the best team in the state last year,” Carrico said. “The bright lights at the state championship, no matter how much you tell yourself that you are going to be ready for it, it’s a really big deal. There is a lot of pressure that goes into that game. It may have shellshocked us a little bit.”

Third-year Ironton coach Trevon Pendleton has seen Carrico’s drive to succeed first-hand. The spotlight only grows brighter this season as the Tigers fight to return to the state finals after a 17-7 setback to undefeated Kirtland last December.

Carrico would rather the team shine and the program return to its championship tradition.

“He’s a very humble kid,” Pendleton said. “It’s easy to get lost in the shuffle when you’re in the position that he’s in. He understands that. It’s about the program. He does a great job of reiterating that, and he works extremely hard every day.”

“He makes sure our kids know that there’s no one kid bigger than Ironton football,” he added. “He does a good job of making sure everyone stays grounded and focused on the task at hand.”

Ironton will always be special to Carrico, he said. He started playing football in the fourth grade with dreams of suiting up at revered Tanks Memorial Stadium.

The Fighting Tigers’ rich history has included many from his family tree.

“My brother, Garrett, and my cousin, Christopher Collins, played football here,” Carrico said. “My dad graduated from here. He won a state championship in baseball. My great-grandmother was in the first graduating class at Ironton High School. When it comes to wearing the orange and black, I am very serious about it.”

Tanks Memorial Stadium was home to a semi-pro team from 1919 to 1930. In the final year of their existence, the Ironton Tanks defeated the New York Giants and the Chicago Bears. Legendary coach Bob Lutz piled up 381 wins, the most in state history, while patrolling the sidelines of the field that now bears his name.

Ironton has two state titles and owns 35 playoff appearances. The Fighting Tigers lore engulfs the community and the players on Friday nights.

“It is something special,” Carrico said. “Other schools might not understand it. It’s a huge honor to play here on Friday nights. It’s always a big deal. We have people that tailgate. Some people might start tailgating at 9 a.m. on a Friday for a high school football game, which is amazing. I will enjoy my senior year here and finish things right.”

“I love playing with expectations like that,” Carrico said. “I like a high standard because when you don’t have standards in place, or aspirations, you will always underachieve. … You always have something to work for.”

“I am focused on winning,” he added. “I want to go undefeated and win a state championship. That is all that I am focused on. If that means that there are no fans, but we still get to play, then so be it.”

As things stand now, Ohio Gov. Mike DeWine will allow players’ family and close friends in the stands this season.

Pendleton expects another great season from Carrico. He is a throwback player, according to the coach, that has set a high bar for years to come.

“The best way I can describe him is he’s an old soul,” Pendleton said. “If you talk to him, you feel like he’s from the late ‘70s, early ‘80s. He’s cut from a little different cloth than most people.”

The path back to prominence has been an ongoing theme during Carrico’s career. The Tigers had a sub-.500 record in his first varsity season. The team improved to 6-5 in 2018 before its ascent to the championship game after 13 victories last year.

One more piece remains in the school’s playoff puzzle. It has invigorated the football town and excited the team as it tries to achieve title aspirations this season.

Carrico said Ironton’s climb back to the state summit has been hard, but well-earned.

“My freshman year, we went 4-6,” Carrico said. “It was weird. You walk around the town and you know how it is supposed to be. I have been an Ironton fan since I was a little guy. People started talking about the program. … But we are back now.”

“I have been on both sides of it,” he continued. “A lot of people are excited, a lot more than when I was an underclassman. It’s a result of our hard work. This didn’t just show up one day. There were a lot of countless hours that we showed up before school.”

Carrico’s work ethic has inspired the rest of the team, according to his coach.

“He’s here every day pushing himself as hard as he can go,” Pendleton said. “He never settles. Any time you have a guy that does all those things and then he’s able to reap the benefits, it does wonders for your program. You have a guy that does everything you’re preaching to the kids. It shows that you’ll be rewarded for hard work and your effort. Reid has deserved everything he has gotten.”

The accolades continue to pile up for Carrico. He spends as much time in the backfield as a middle linebacker as he does as a running back. The senior was named the Ohio Division V Defensive Player of the Year last season and accumulated 168 tackles, 18 for loss. He also added three sacks.

Carrico’s versatility has allowed the senior to play multiple spots on the field.

“This will be the first year in my football career where I will play the same position on defense,” Carrico said. “Right now, there might be a little rust with making my reads or flying to the football. I definitely feel better about playing that position and a lot more confident. I have that experience and I know how I can play.”

“I like to play offense all right,” Carrico said. “It depends on what type of game it is. If it’s a game where we have to spread it out and throw the ball around, that’s fun because we can spread the wealth. I love the grind-it-out games where you have to fight for every yard. When I get to Columbus and can focus on one position, I will be a better football player.”

Carrico caught the eye of Ohio State early in the recruiting process. The Buckeyes, along with Marshall, showed interest before anyone else, and those two were the first to extend scholarship offers.

Then 32 more Division I offers followed, according to Rivals.com, mostly from Power Five and nationally ranked programs such as Clemson, Alabama and LSU, who all competed in the 2019 college football playoff with the Buckeyes.

“Coach (Ryan) Day and I talked about how Ohio State got away from recruiting Ohio guys and how important that was,” Carrico said. “Our big thing in this class was to lock down all the good players in the state. They have done well at that.

Pendleton started 28 games at fullback for Michigan State, so he understands the grind of playing in the Big Ten.

“I just told him to be ready,” Pendleton said. “It’s something you have to wake up every day and attack. I’ve seen a lot of very good athletes get chewed up and spit out, but he understands that. He is wise beyond his years and he is ready for that.”

Carrico said he picked Ohio State after building a strong rapport with the coaching staff. The senior has treasured his time playing at Tanks Memorial Stadium, but he imagines the scene at Ohio Stadium — the Horseshoe — will be an eye-opening experience.

“I chose Ohio State because I had the closest relationship with the coaches there,” Carrico said. “They were there through all the jumps in the (recruiting) rankings. I just felt like it was the place to go. … It will probably be pretty crazy the first time that I run onto that field. I assume that I will get used to it. Then again, you might never get used to playing in front of 105,000 people.”

Carrico said he has lived with a sour taste in his month since that early December night in Canton last season.

He has been on a mission to bring back that familiar championship culture.

“I want to be remembered as one of the players that brought the team out of the darkness,” Carrico said, “and have that winning attitude that you’ve got to get back to the state finals or you have underachieved. I don’t want to be remembered as the best football player to play here. I want to be known as a player that when there was a big game where you needed to show up, I showed up and played as hard as I could for my team.”